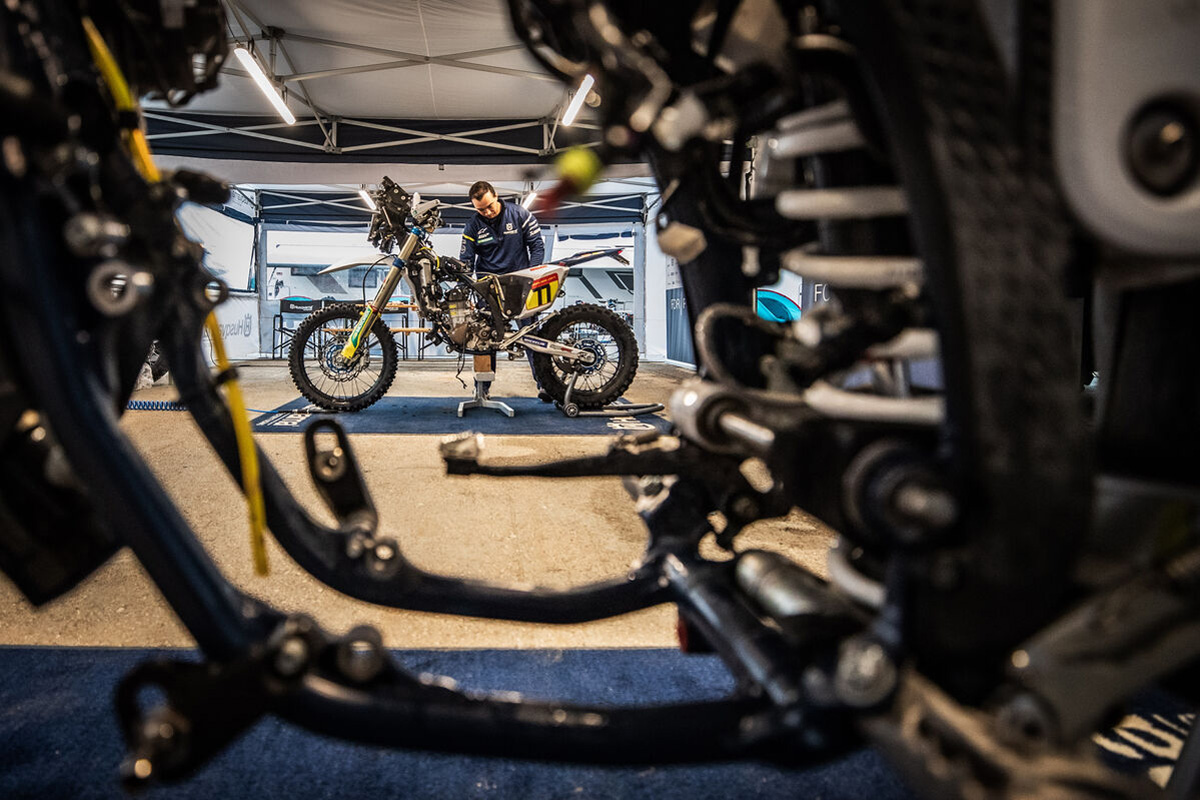 Enduro21 Notebook: Behind the scenes look at factory Dakar service

Enduro21 daily Dakar notebook today goes ‘fly on the wall’ in the Red Bull KTM, Husqvarna and GASGAS Factory Racing service areas to find out exactly what they do after every stage, what parts they replace and just how much goes in the garbage.

There are worse ways of spending a couple of hours than hanging about in a factory pit area watching professional mechanics are work. As the cliché would have it, watching this well-oiled machine do the day job is fascinating no matter which part of off-road sport you’re into.

Sitting side-by-side, this service area is a hive of activity for 15 days of racing to keeping the riders on track for arguably the Austrian manufacturer’s most coveted prize in off-road sport.

Enduro21 went fly-on-the-wall for the whole process, here’s what happened… 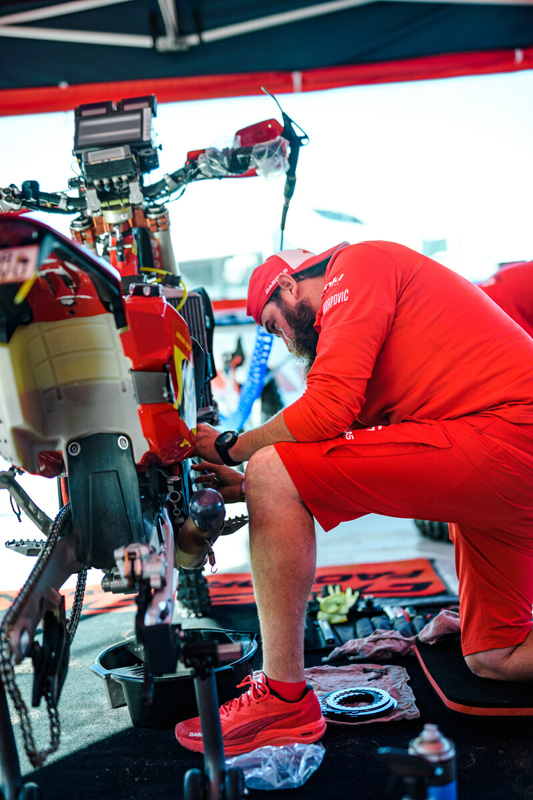 Step number one as the riders clock into the bivouac pit and ride in to find their pit area, is rider debrief. After the weary leg is swung over het back of the bike and almost before the helmet comes off, machancis are like flies around the rider wanting to know what’s up, what happened and how the stage was for them.

Among all that quite quickly the focus turns to the bikes as the mechanics get on with their jobs while the riders do a final round of interviews.

That debrief can be pretty quick, if nothing’s wrong there’s nothing to report. But on this day Toby Price came in saying a crash had bent the front wheel or disc, he wasn’t sure, and that he had no front brake for the final part of the stage. The crash had also bust the number plate off.

Cleanliness is next to godliness

If the bikes are just dusty, the air lines come out (and are in constant use for the next hours) but if it’s a wet and muddy day they get taken around the back to be jet washed. 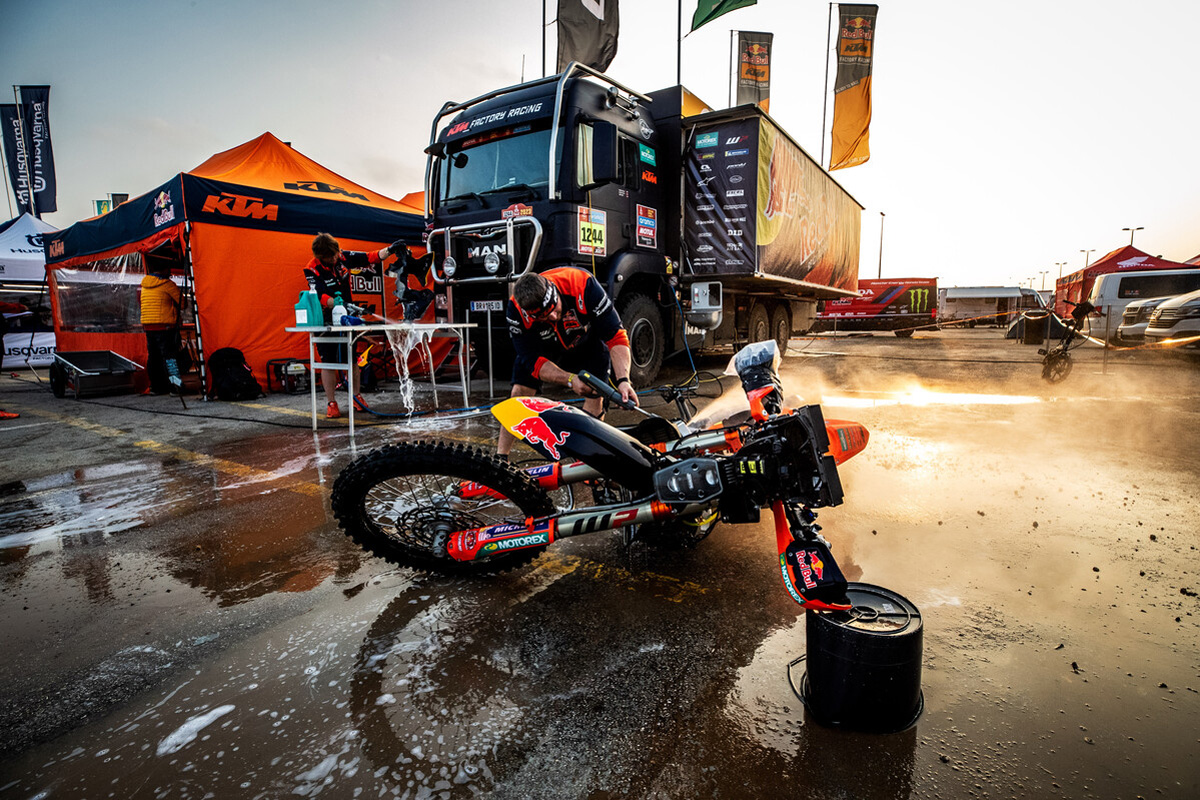 On the whole in the KTM/Husqvarna/GASGAS pit areas there are two mechanics to each bike but there are a few extra here since Sam Sunderland had already gone out, which is why you might see the wrong coloured clothing in a different pit sometimes.

Beyond those two per bike, there are people with individual roles like electrics, data guys with laptops, WP suspension technicians as well as the various team members keeping the whole show moving including “the boss” Sarah who seems to keep all the balls rolling.

Air guns start blowing some more and the sump guard comes off to reveal a small bird’s nest. The seat comes off and the fuel tanks are next to get unbolted to reveal the naked bikes. The dusty air filter sits exhausted on top.

With the sump guard off and a lot of Motorex brake cleaner getting sprayed around, the oil drain plug comes out which also gets thoroughly checked, cleaned and blown dry with the air line. All the time, every part which comes off gets inspected thoroughly, cleaned, inspected again.

Soft brushes and the air line clean the radiators too and the start of the daily freshening up process which includes oil, oil filter, air filter gets underway. A fresh clutch each day is also part of this process.

As a precaution, fuel tanks front and rear are drained away to check for contamination. It seems to happen each year that some riders suffer with water in their fuel at the Dakar and the teams are taking no chances, looking carefully at the gas as it collects in a jug. 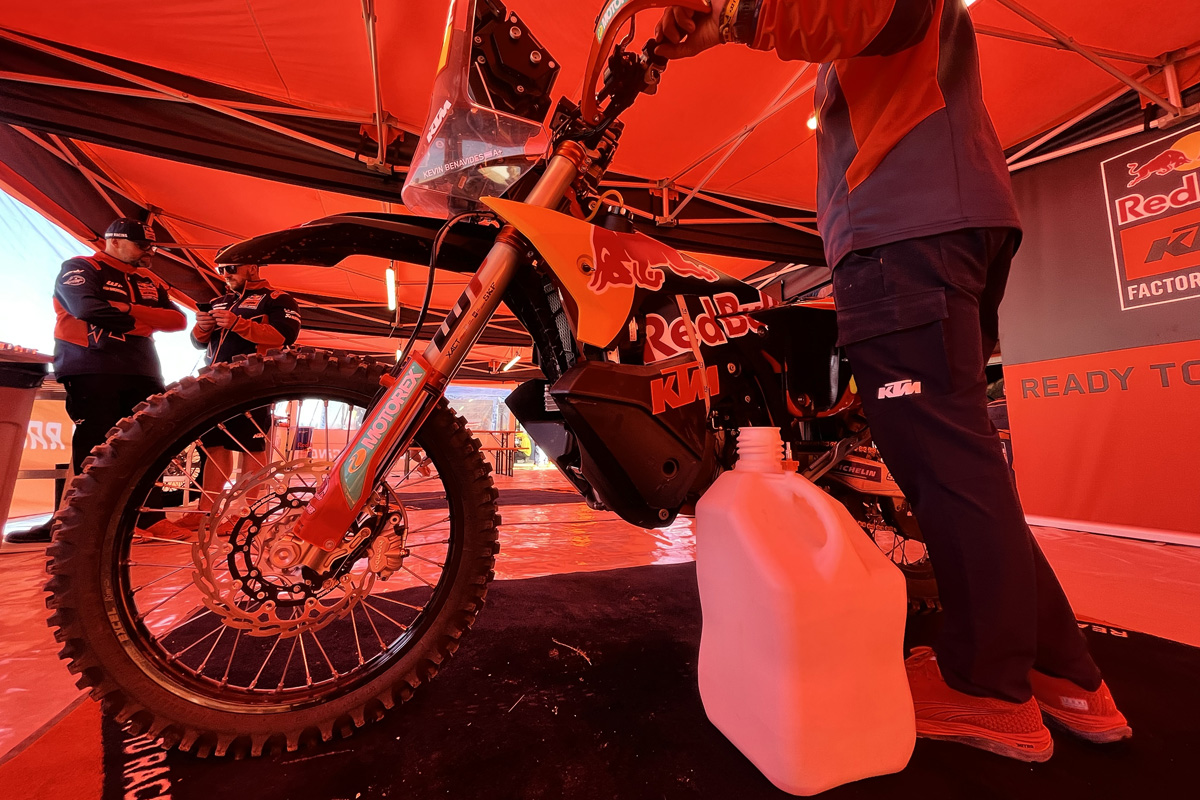 While fuel is draining the process of checking around the bike continues methodically. On Toby’s bike, because of the crash, they’re taking extra time over bolts, bodywork, how the tanks are sitting and all the while cleaning as they go.

Nothing is worked on dirty or left scuffed, it’s removed and cleaned with the principal a bike should be as good as new tomorrow morning. If plastics are scratch badly or the Akrapovic exhaust can a new one goes on.

After the fuel tanks and bodywork are out the way, a wiring loom inspector arrives and it’s like everyone else has to work around him.

His sole responsibility is to build the looms back at the factory and they are his babies here at the race (as well as driving one of the trucks FYI and no, that is not the England football manager making a guest appearance). 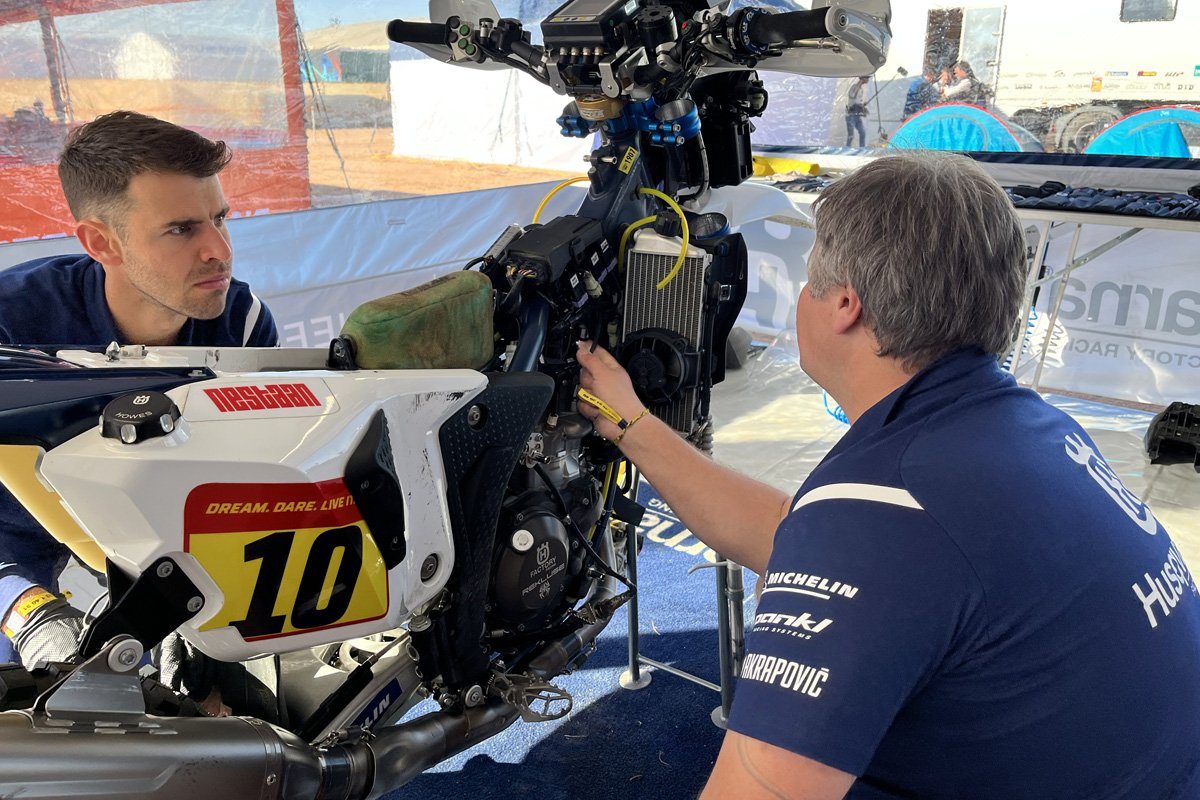 Not that anything here is rushed but he seems particularly methodical, visually inspecting first to see the wiring looks intact and nothing’s rubbed or squashed under the tanks or seats all across the seven bikes. After the visual check he’s checking connectors physically, making sure things are clean (of course) plugged in and sitting as they were.

It’s one of those times when you can tell a huge amount of experience is right here at work. That one time something got disconnected or squashed under a seat and shorted out was the time they all remember because rider X lost the rally. They aren’t about to let that happen again.

Suddenly a WP guy arrives and starts bouncing the forks on Walkner’s bike. “Where are the forks?” he asks across to Benavides’s mechanic.

The WP technicians are as busy as anyone here and although they tell us they service the forks and shock every couple of days, each afternoon Enduro21 pops by for a snoop, forks are out of bikes and up in the truck behind.

For the record, servicing means cleaning, inspecting, replacing oil seals and a dose of fresh oil before checking settings. 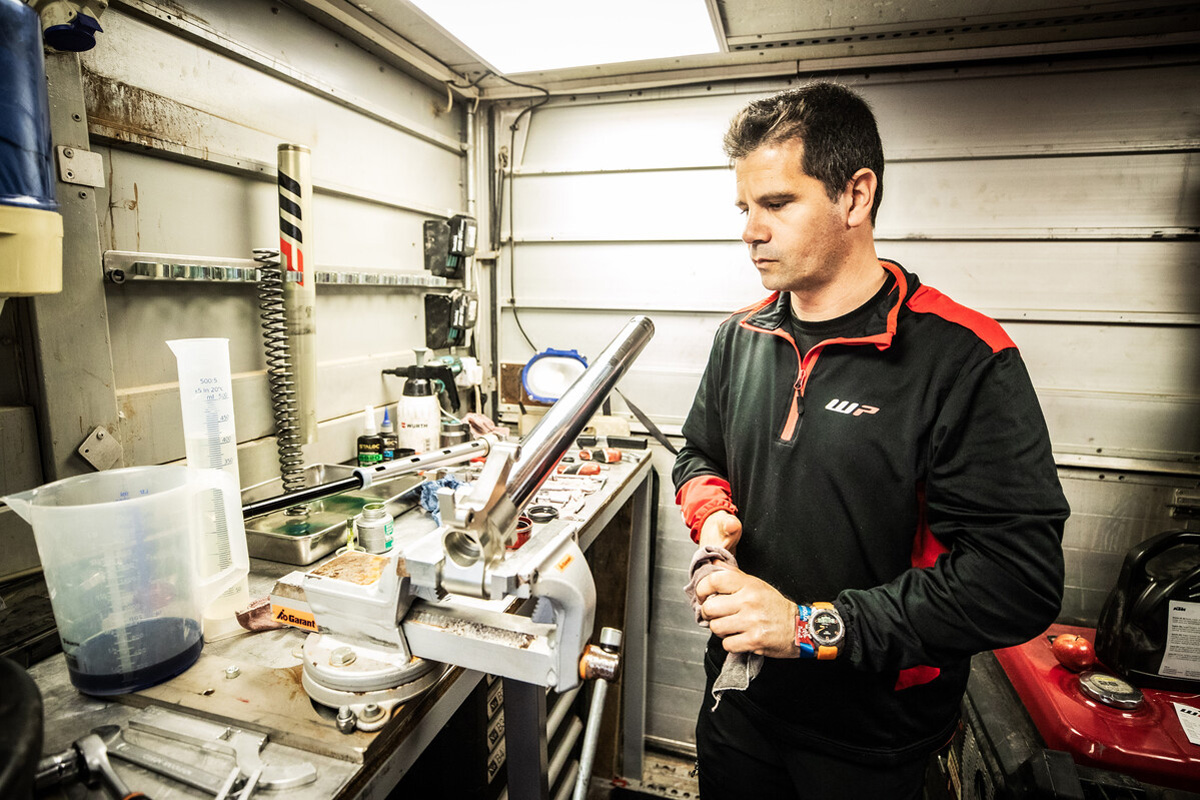 You’re going to replace that?

The list of parts getting replaced is a little staggering. As ever it depends on the stage and the weather conditions but on the day we were stood watching, the long list of seemingly good parts chucked in the bin was jaw dropping. Stuff you just wouldn’t do at home in your own garage. 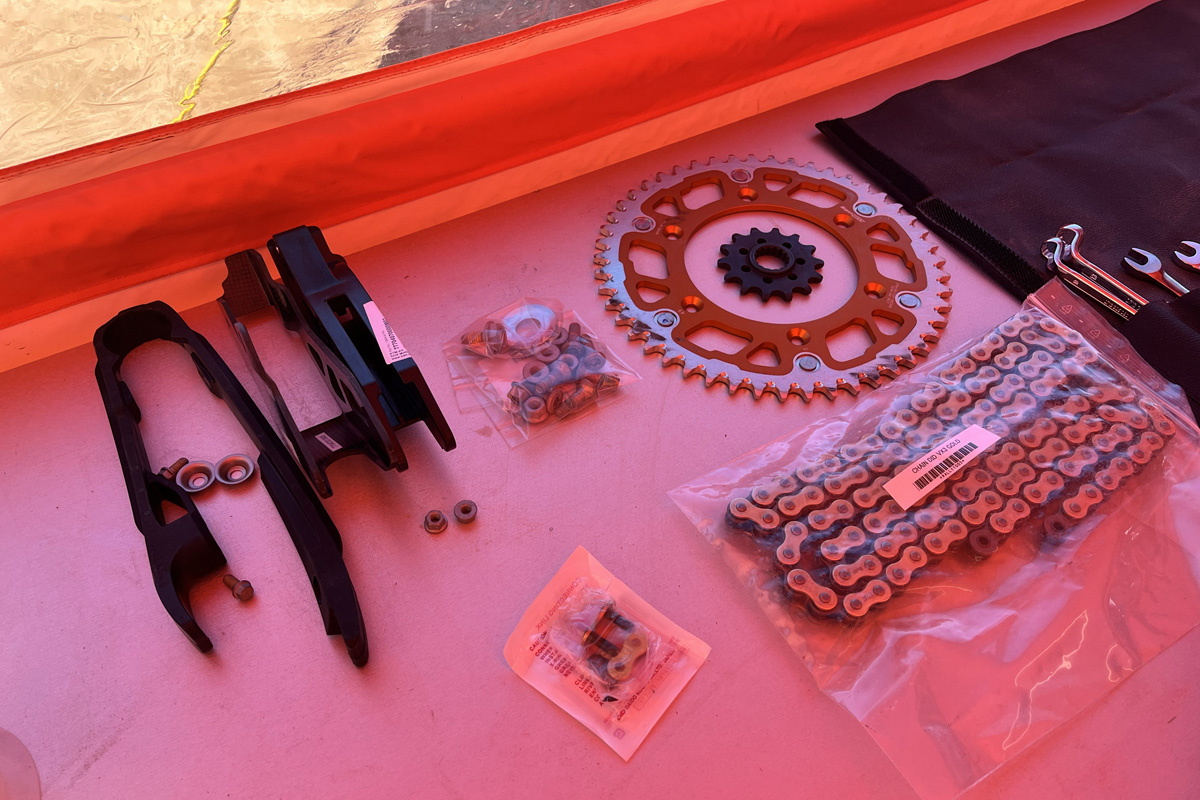 Wheels come out and are taken round to the tyre guy but they effectively change for fresh wheels every day. We double checked to be sure, “new wheels and tyres and mousses every day?” Answer: “Yes”. That also means new brake discs too.

More air line blowing and cleaning goes on (with a heap of spray-on cleaning mousse) once the wheels are out and brake pads are removed and binned. “We don’t replace everyday but no more than two days and these have done two days.” They look like new to us. The hydraulic brake systems get bled across all bikes after every stage as well.

Like the pads, the chain, sprockets, chain guide on the swing arm and rear sprocket protector don’t get changed every day unless it has been a wet, sandy one or there are a lot of rocks. Again, they don’t do many days though and as we stand by, some perfectly good chain guides head into the rubbish sack.

The most careful chain replacement, ever

Part of the process of refitting is naturally to continue the inspection and the care of these pro mechanic in a factory team is a lesson. No-one wants to be that person who makes a mistake and costs the rider time on the stage or a mechanical DNF. Imagine how simple it would be for a rider’s whole rally to be done because of bust chain? 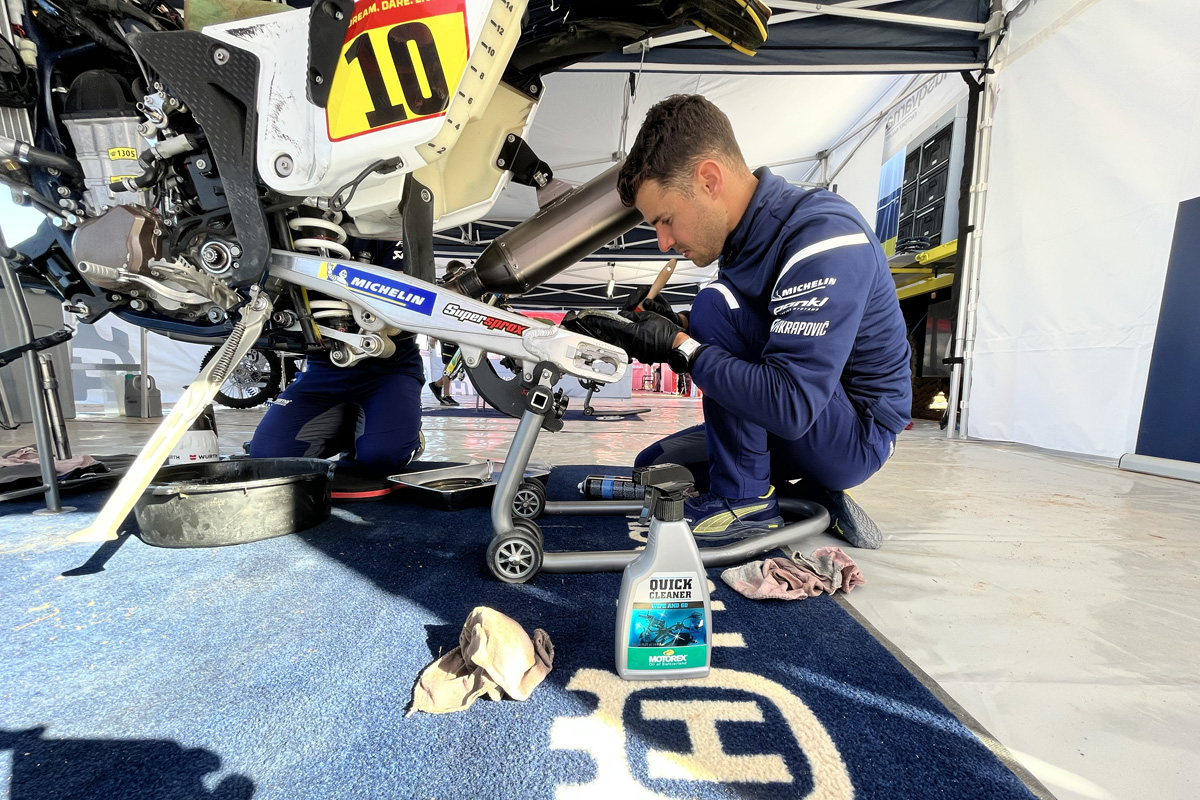 For that reason, refitting the chain looks more like surgery and seemed like the most careful part of the process we watched.

The fresh chain gets wrapped around and rests on the new rear sprocket before the new split link is fitted and crimped in. The process is so super-careful though and the new link is checked and checked again.

At one point there’s a whole lot of turning the drive shaft manually, putting it in and out of gear, pulling the clutch, feeling and listening. They were checking for anything irregular. 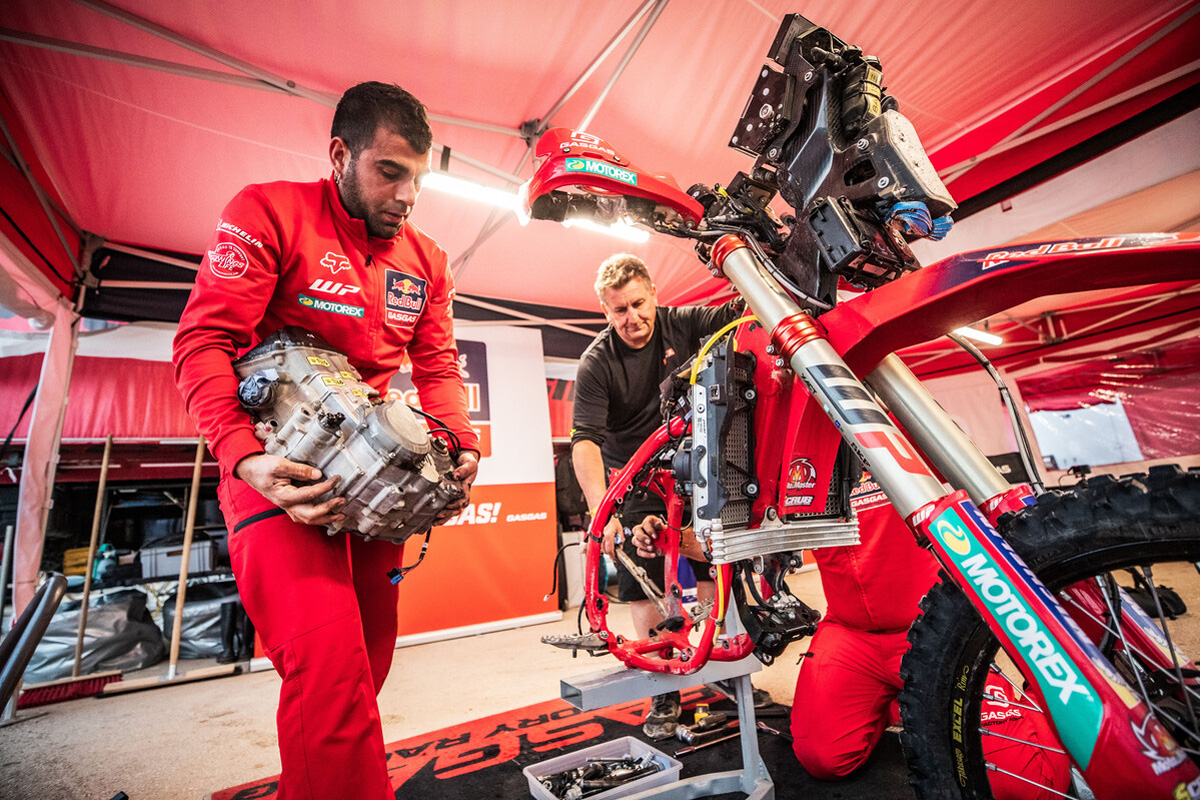 The engine is one of the parts they cannot change, along with the main frame, without incurring penalties. If you see 15 mins time penalty next to a rider’s name in the results it is because he or she has had to swap for a new motor.

What they can do on the rest day though is change the piston and service the cylinder head which means checking the valve clearances, replacing the piston, rings and top gasket. Oh, and spark plugs get replaced each day too.

In general the whole process takes a couple of hours, depending on how dirty the bikes are or if they’re damaged at all. The work is methodical and clearly has a set pattern which each member of the team knows exactly. 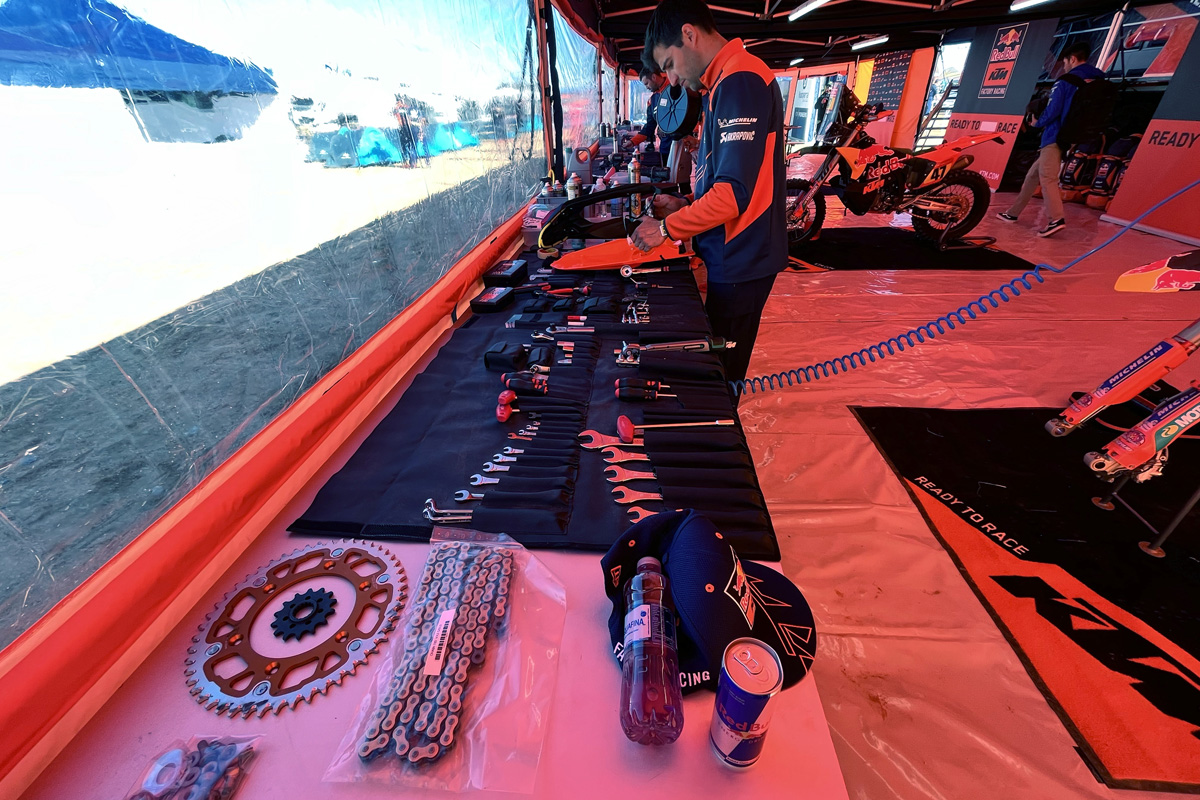 On the whole the mechanics are working like machines but the radio is playing rock music and the atmosphere is light.

One powerful impression, apart from the big team effort, is how much care gets taken over simple tasks. The chain for example but even down to the stuff maybe you don’t spend so much time over on your own bike. Something like the axle spindle which we watched get treated like it was a baby in a bath. It was wiped spotless, caressed and was put to bed with a light wipe of oil.

No stone unturned and all that.