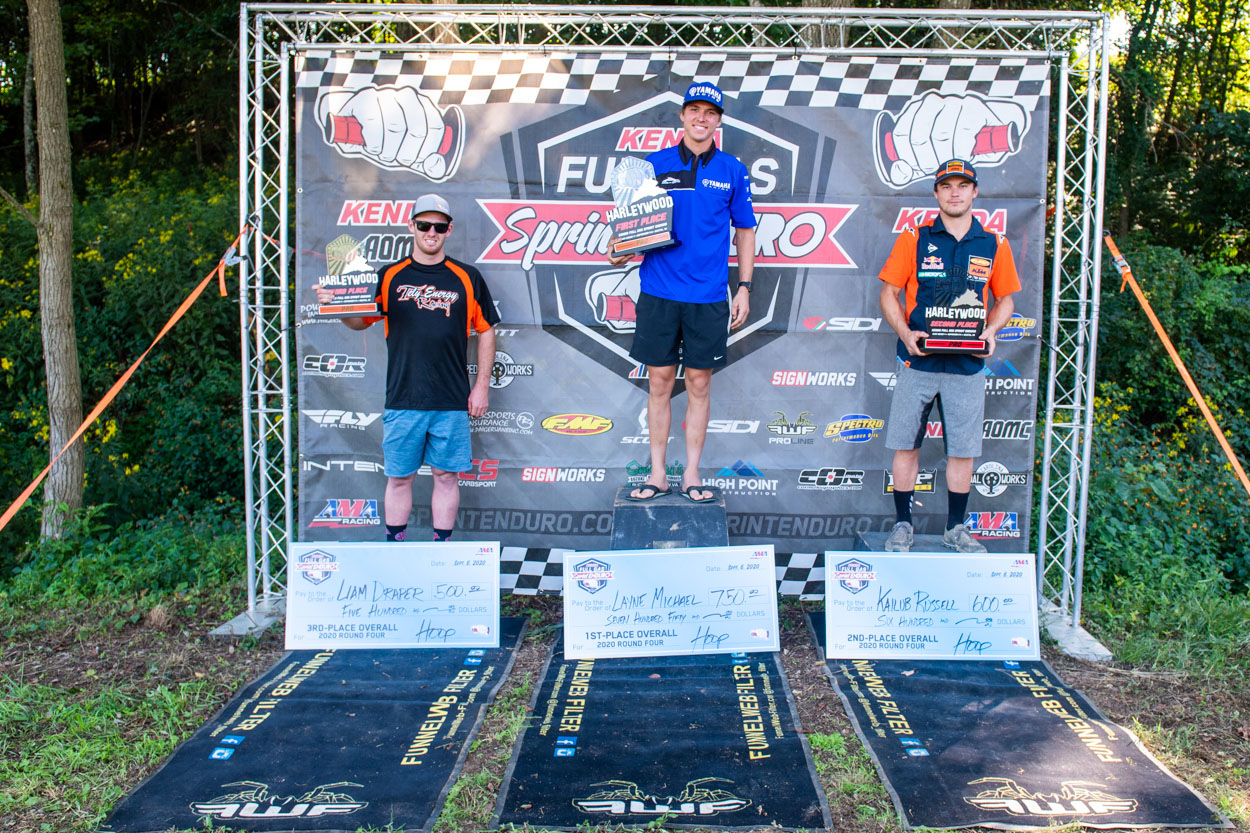 Round four of the 2020 FG Sprint series had been scheduled for the previous weekend at Harleywood, which would have been back-to-back weekends at the course. However, thanks to a hurricane hovering off the coast, the weather forecast leading up to the first race called two inches of rain and 30 mph gusts, so series promoter Jason Hooper decided to run both rounds over Labor Day Weekend. A call that worked out perfectly since ‘Mother Nature’ cooperated over the three-day holiday.

The race for the overall win was a dogfight between FMF/KTM’s Kailub Russell and Pro Yamaha’s Layne Michael all weekend, and Michael’s victory at round four (Saturday and Sunday) marked the first time this year anyone has able to wrestle the top step of the podium away from Russell.

Russell got off to a bad start in the very first test on Saturday and quickly realized he might have a battle on his hands. “I didn’t even fall in the first cross test and I got smoked,” said Russell. “I knew straightaway in the first three turns that something was off. I didn’t feel at home on the bike. I came in and figured it out, we forgot to make a settings change after some testing we did, so I put it back to normal. Then I had a pretty good enduro test going (test 2), and lost my brakes halfway through it.”

By contrast Michael look especially sharp having just returned from an injury three weeks before. “Now I feel like I’m back in tune with the bike,” said Layne. “This place suits me pretty good. You got to be patient. It’s rocky, it’s choppy and it’s not too tricky. I think this track, you can easily over-push and make more mistakes but it seems to suit my style really well.”

“This is the first time I’ve been able to make [Kailub] stress maybe a little bit,” said Michael, who is a practice partner with Russell. “It definitely feels good to get the win.” 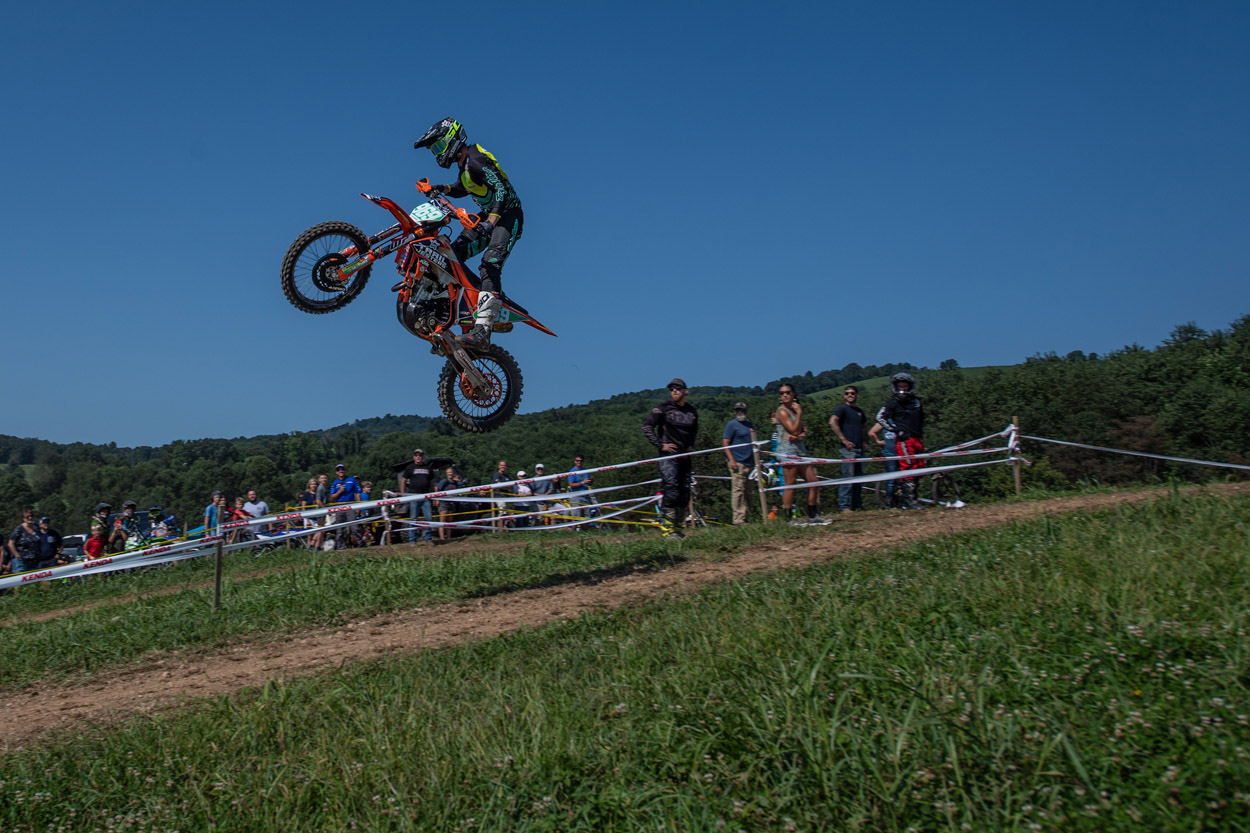 Trail Jesters Racing KTM’s Johnny Girroir continues to impress with his top finishes from the Pro 2 division. Girroir was third overall at round 4 and first in the Pro 2 class. “There were no berms, no ruts. It was a lot of just kind of body position and working the motorcycle and sliding around and staying on the front end and shifting your weight around,” said Girroir. “For the most part, I rode really good, although I stood myself up a couple times and that’s all it takes is a couple seconds to lose a test.”

The result put Johnny in prime position to take the Pro 2 Championship for 2020 at round five on the Monday.

Draper jumps on the Pro podium

Grabbing his first Pro podium and fourth overall was Liam Draper. The Tely Energy Racing KTM rider started fast by winning the first Enduro test on Saturday. He consistently scored in the top-four the rest of the weekend.

“I was happy with my riding all weekend,” said Draper. “I’ve never been that close to podiums and test overall wins, so I was happy. I had a good week leading up to the race and I did a lot of sprints. It paid off, obviously.”

Four-time National Enduro Champion Steward Baylor put his privateer Kawasaki into fifth overall, just 16 seconds behind Draper. Meanwhile, Jordan Ashburn got the hard luck award for the day. The Team Babbitt’s Online/Monster Energy/Kawasaki Team Green rider was sitting in a solid third overall heading into the final test, but clipped a tree and lost his clutch, which cost him enough time to drop him to sixth overall.

Tricker and Jones to the WXC wire 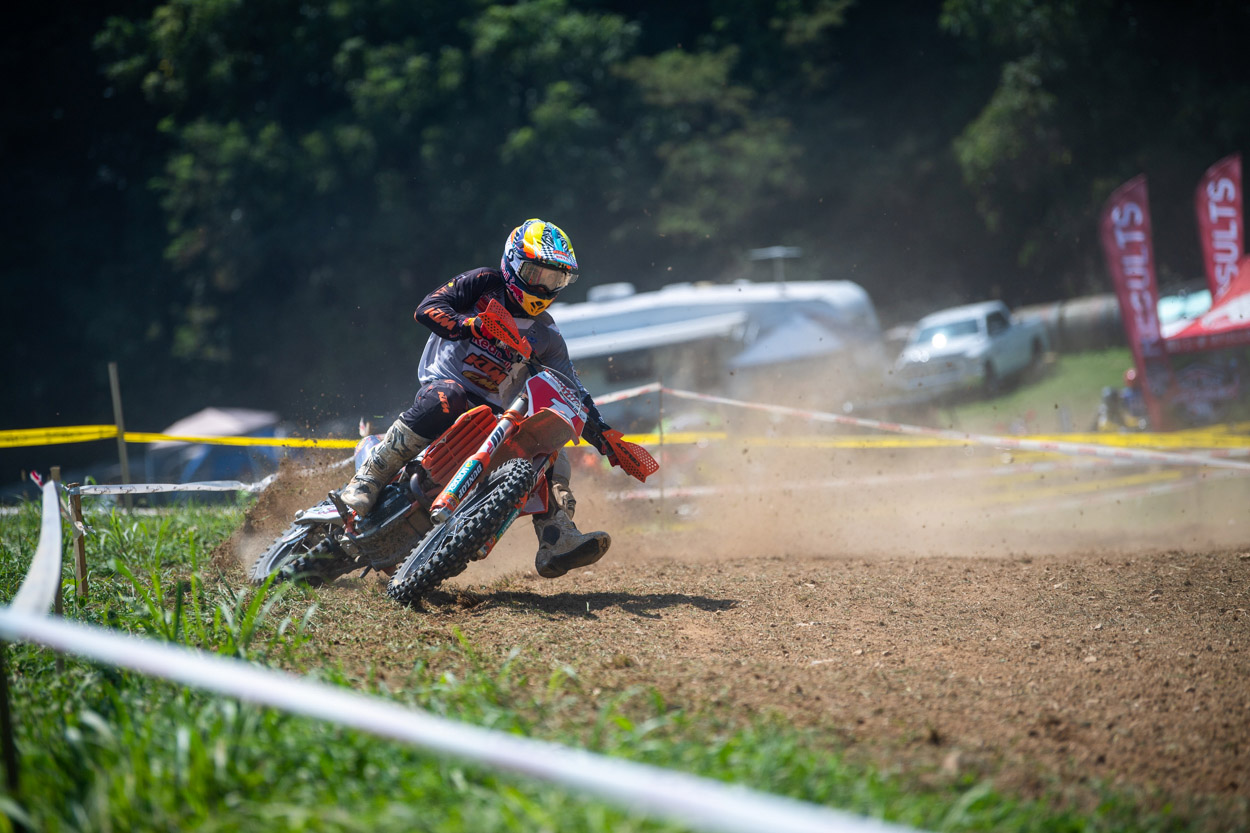 The Harleywood course dried out a bit for Monday’s round five, leaving mostly flat turns with no berms to speak of and Chile’s Ruy Barbosa drew first blood on his Husqvarna by winning the opening test of the day (a Cross test) by 1.5 seconds ahead of Michael, with Ashburn in third.

Meanwhile Russell slid out in a dry turn and ended the test in sixth. “The first cross test I washed out,” said Russell. “I washed out and I just kind of lost my rhythm there for a minute and then I got back into it. I kind of minimized the damage.” 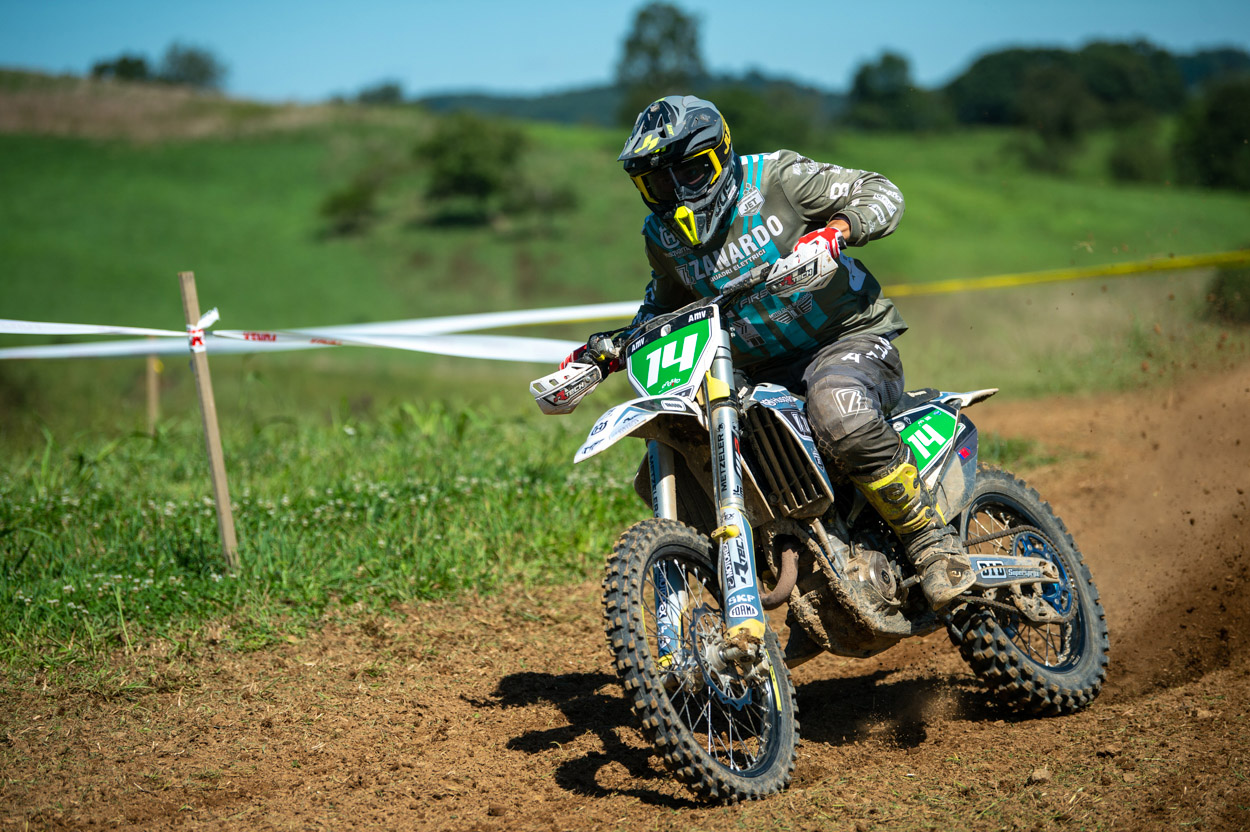 Barbosa, a former 125 World Enduro Champion, was using the Harleywood race as a warm-up for the upcoming EnduroGP World Championship, which kicks off in France next weekend. The pair of Pro 2 riders owned the Cross test on Monday, as Girroir would win it on the second run, while Barbosa returned to take another win on the final pass.

Michael and Russell remained locked in a battle for the overall as they traded wins in tests two and four. Heading into the sixth and final test, Russell led Michael by less than 0.2-second for the overall win. Obviously upset at how the weekend had gone so far, Russell posted an amazing final test to claim the overall win by 6.8 seconds ahead of Michael.

“I ride better when I’m pissed off,” said Russell. “A lot of people get mad and get frustrated and it works the opposite way, but if you piss me off I’m going to lay the hammer down. I was frustrated with how the day was going and how well Layne was riding. I felt like I was riding good. I ride with him all the time so I know where I stack up against him. He was definitely head and shoulders better than he’s ever been this weekend. I was frustrated and wanted to lay it all out there.”

Michael was disappointed at missing out on another overall win by such a small margin, but pleased with his performance. “Today was back and forth,” said Michael. “He went down in the first test and I was able to kind of get a four-second buffer, then that was wiped away. The second test he beat me by six. Then I think the next two tests we were pretty much dead even. We went in that last Cross test, I think he still had maybe a second and a half, something, and I got it down to two tenths. Going into that last test, I just wanted to go out and ride how I have been. It’s been a really good weekend for me. I went out and I thought I rode a perfect test, but I think his was a little more perfect. But it was good, all in all. I’m just a little frustrated with kind of giving up that much time.” 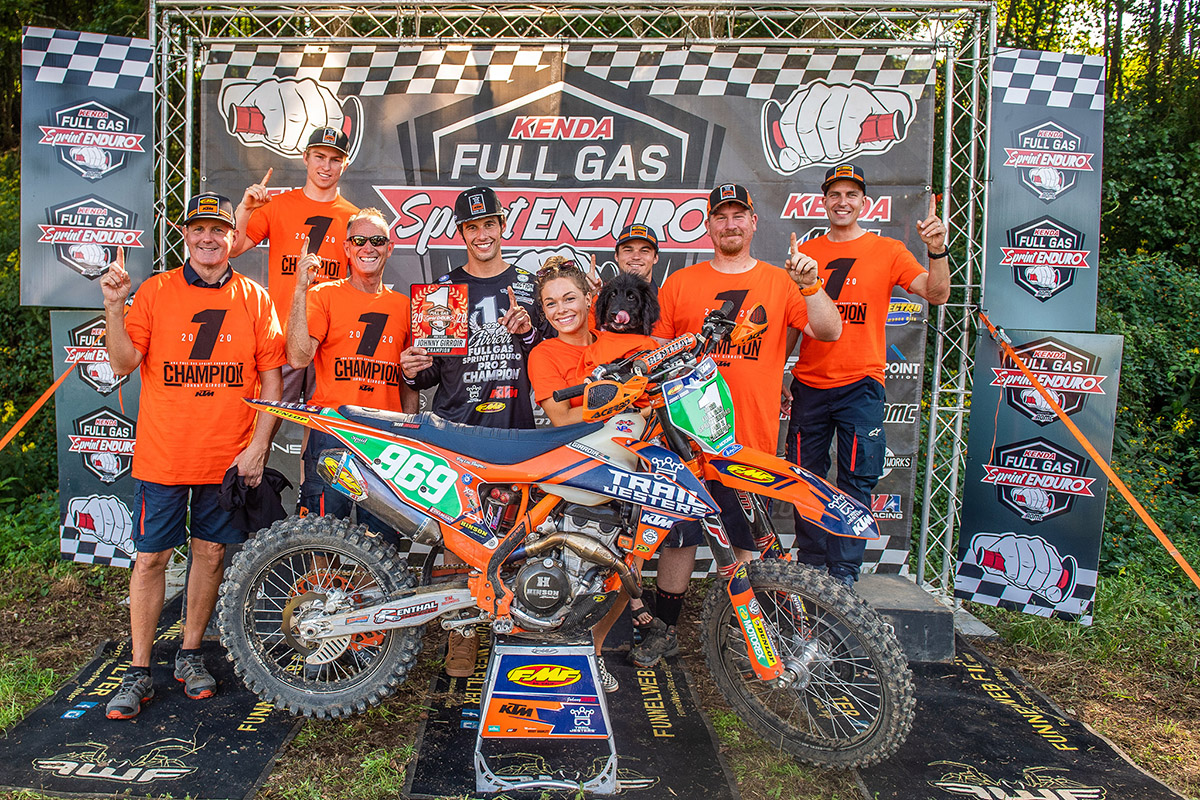 Girroir was third overall once again, although this time he was being pushed hard by Barbosa in fourth. Barbosa ended the day with two outright test wins, while Girroir finished with one. However, Girroir was a bit more consistent and beat out Barbosa by about 15 seconds in the overall standings. 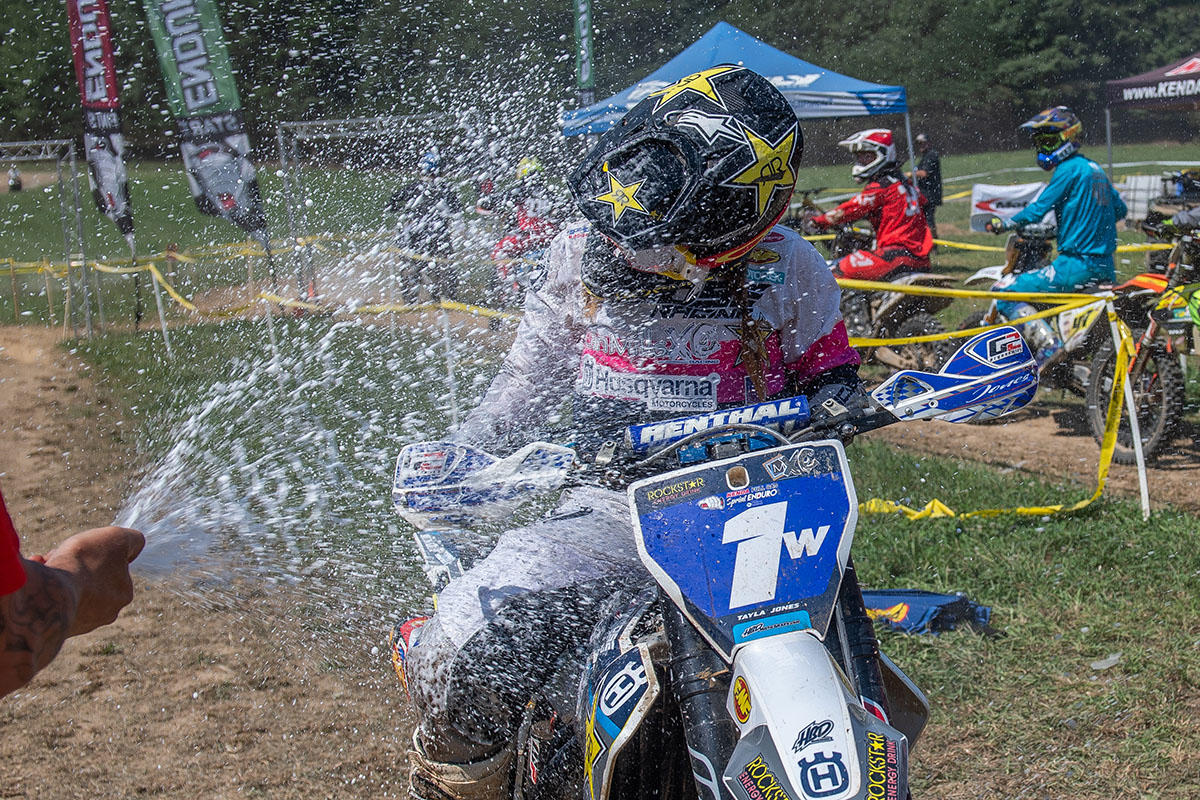 In the Women’s Pro Class, Rockstar Husqvarna Lan Mills XC rider Tayla Jones had amassed enough of a lead in the series standings that she wrapped up her fourth Women’s Pro Championship just by starting Monday’s event.

“It was good to get another year,” said Jones. “Four times is pretty incredible, for sure. Coming into this weekend we didn’t even know if we could ride due to my hand, so just to get on the podium here was great but to wrap up the championship is what we’re here for, so I’m stoked.”

Enduro Engineering/ Mepmx/Fly/Grizzly Peak/Traveler’s Rest Speedway/KTM’s Mackenzie Tricker went on to take the round five win, with Archer rounding out the podium in third.

Tricker was pleased with her performance over the course of the three days. “It couldn’t have gone much better,” said Tricker. “I won three days and both the overalls. Today I had a little bit of a lead going into the last test and I knew I didn’t want to make a mistake, so I cruised a little bit and ended up losing the last two tests today. Other than that, it was a great weekend.”