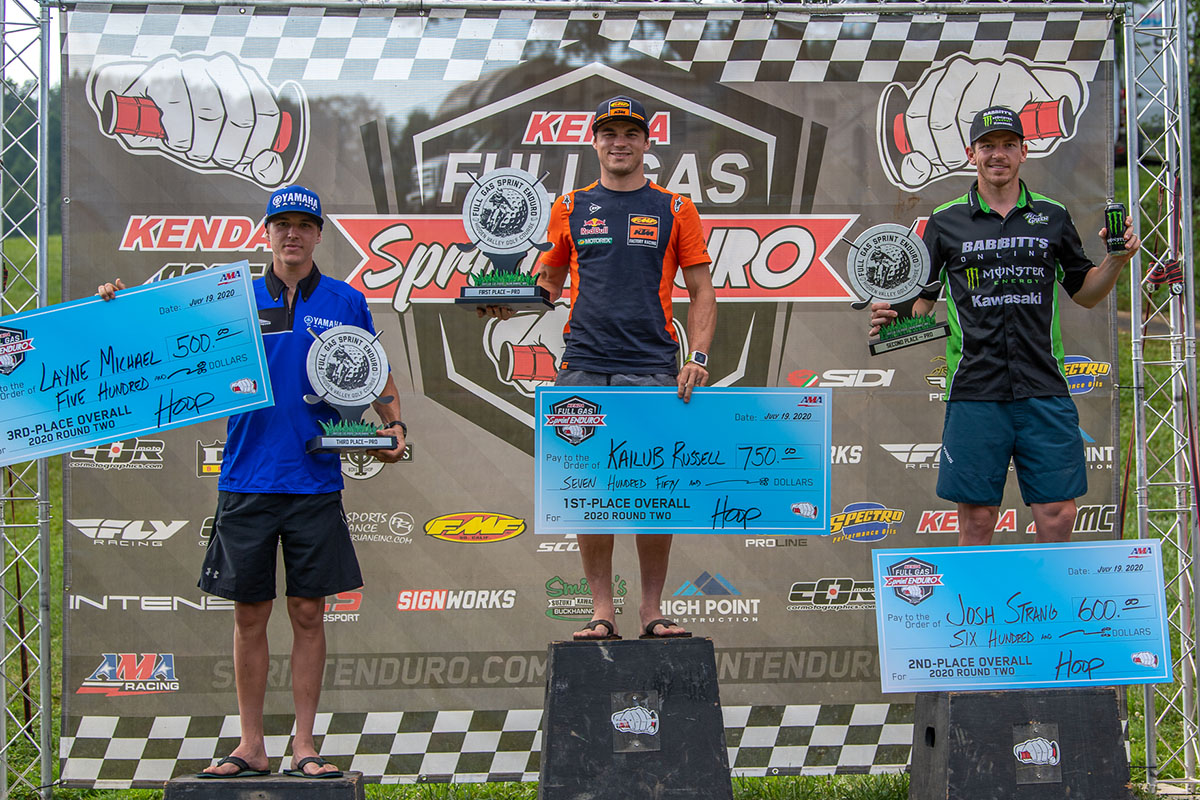 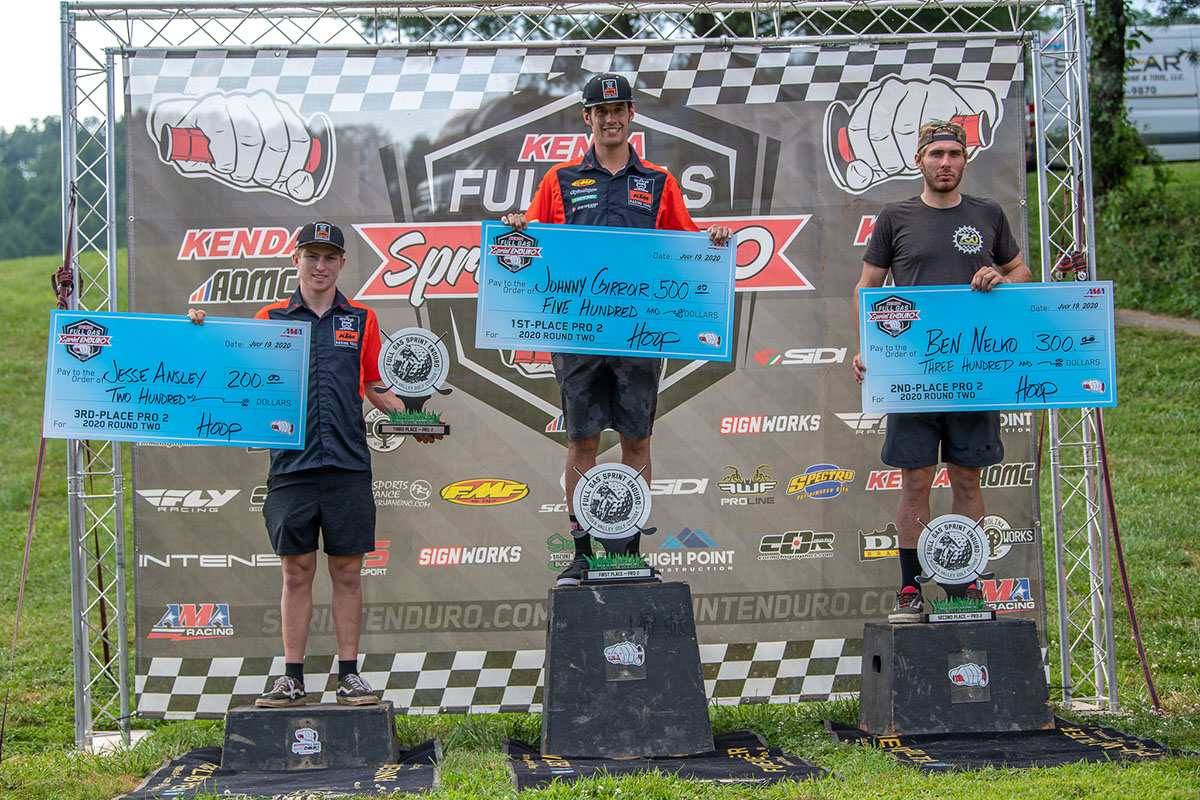 The 2020 Full Gas Sprint Enduro Championship finally swung back into action at Hidden Valley Golf Course for round two where Kailub Russell and Josh Strang topped the results sheets with just a 2.5 seconds gap after two days racing.

The stage was set for the weekend when FMF KTM Factory Racing’s Kailub Russell won the opening cross test of the weekend by just 0.4-second ahead of Josh Strang. Russell admittedly made his share of mistakes over the weekend while Babbitts Online Kawasaki’s Josh Strang kept him honest. Test times across the 24 tests during the weekend (six enduro and cross tests each day) are fascinating viewing as the top six riders traded blows.

On Sunday, Russell came back strong, but stalled his engine twice during the first test, the Cross test, having damaged his kill switch from the crash on the previous day. This gave Strang a little more daylight, as Michael finished second and Russell rebounded for third. However, Russell took out his frustrations on the Enduro test, where he had crashed the afternoon before, and won the test by an amazing 10 seconds. 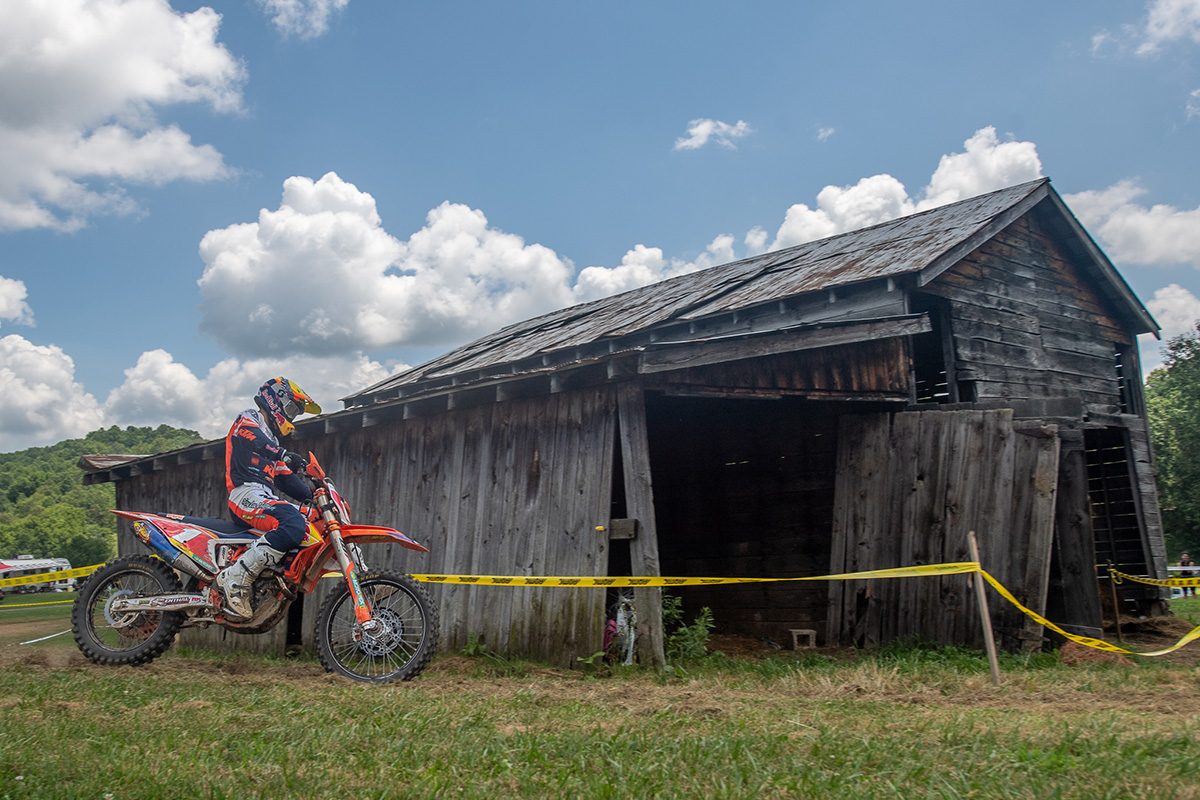 “It was pretty up and down, really,” said Russell after his win. “On Saturday I couldn’t keep it off the ground. I crashed twice in the first two tests and I still won them. Each one was by less than a second. Luckily, I was still in the fight there. The woods (enduro test) are iffy and not my favorite and I had a three-second lead going into the last test and I threw it away. That really kind of pissed me off.

“Yesterday when I crashed I damaged my kill switch”, explained Russell.“My bike shut off on me twice in the very first test today. It did it twice and I only lost by four seconds. I was pretty happy with that. Then, I rode that first woods test real pissed off [and] got all the time back in the one test. I won by ten seconds. I just hung it out. I felt like I threw it away there on Saturday, but Josh was riding good. He kept me honest all weekend. It was tough.” 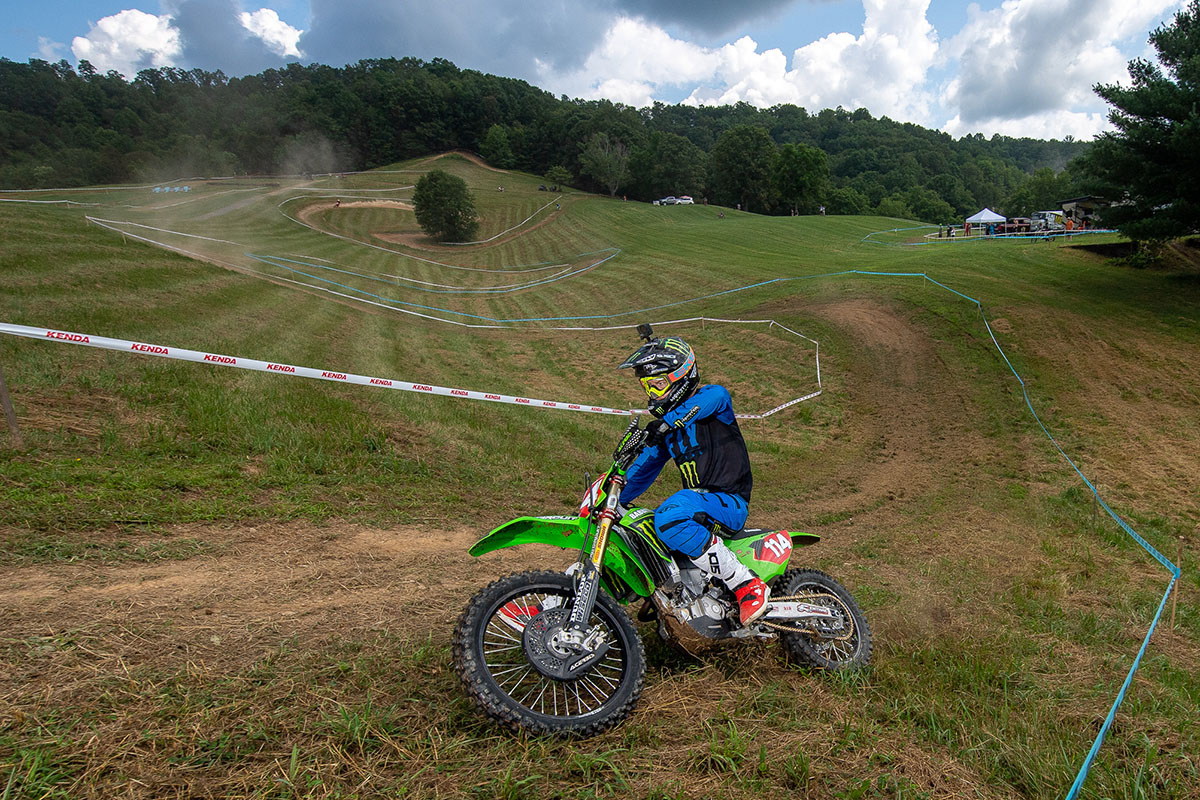 Strang finished the weekend off just 2.5 seconds behind Russell for second overall, which the Aussie off-road was pleased with. “You just have to be aggressive but also have to not make any mistakes, and it’s difficult,” said Strang. “I enjoyed it yesterday more so than today, but the woods test for me was fun all weekend. My times were competitive too, which was good. Usually the Cross test I’m more competitive and I lose a little bit in the enduro. I think I won four enduro tests, so that’s good for me. Overall, the weekend was good. I lost the overall by two and a half seconds. I didn’t do anything wrong. I had a few small mistakes but all my tests were pretty good. Kailub had a killer first enduro test today. He was ten seconds faster than everyone all weekend. That’s Kailub. He can pull it out, he must have been on edge. He does it everywhere. He’s good at it.”

Johnny Girroir pushing it in Pro2 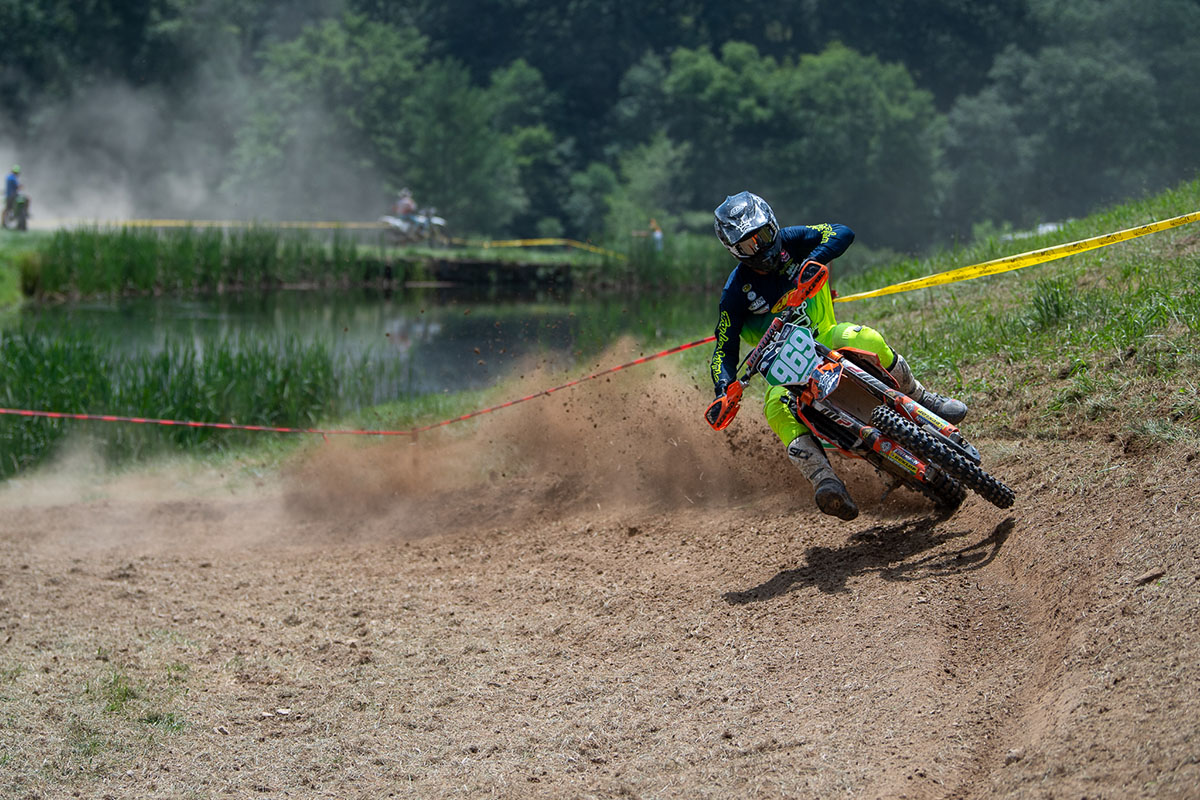 There was a major focus on Girroir on Sunday, to see if he could repeat his third overall finish from Saturday, and the Southwick, Massachusetts-native delivered, edging Layne Michael by just under six seconds and securing third overall for the weekend. The finish also put Girroir at the top of the Pro2 division.

“I started off a little bit slow, just timid on the weekend,” said Girroir. “I didn’t really want to crash, but it’s not the name of the game here. It’s sprinting. I think I won 11 out of 12 tests in Pro2, so it feels good. I liked the roots and rocks and stuff in the Enduro test. They were just slick and high-speed, so it was a little dangerous.” 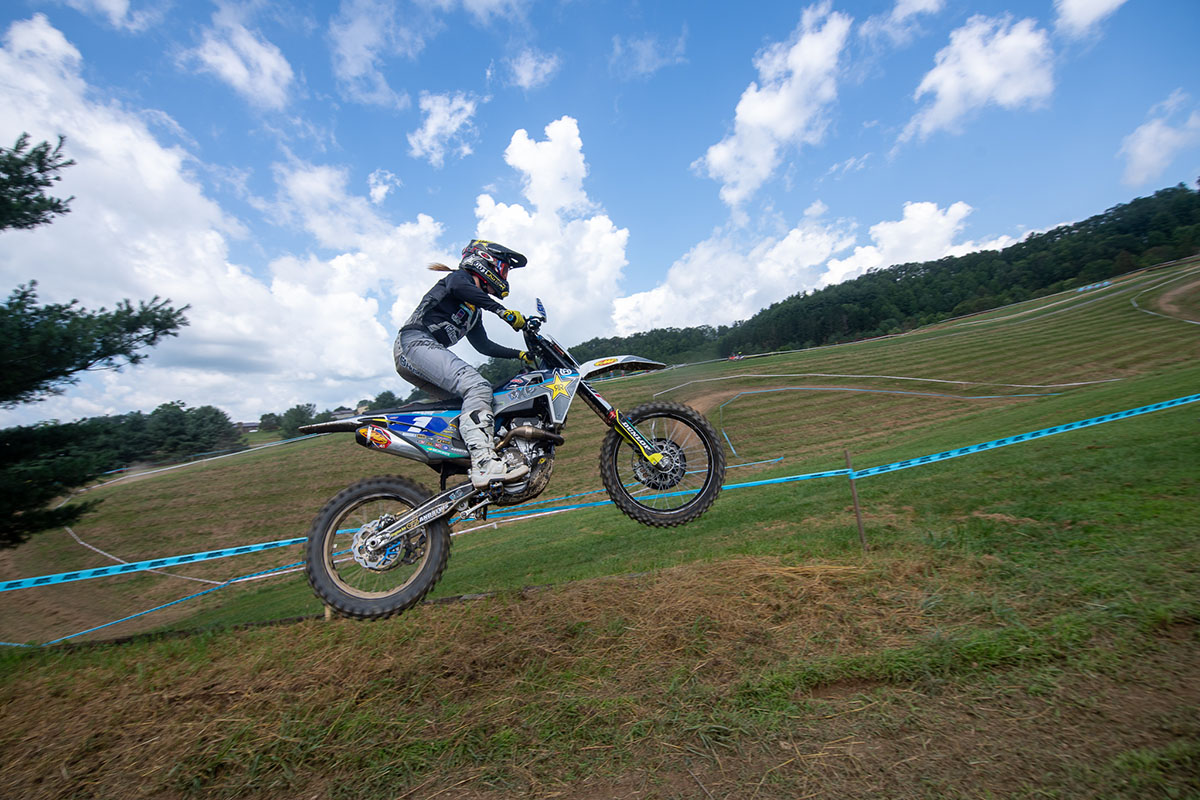 In the Women’s Pro Class, Rockstar Husqvarna Lan Mills XC rider Tayla Jones took the win by just less than four seconds ahead of last weekend’s GNCC winner, Am Pro Yamaha’s Rachel Archer. “I had a pretty good weekend,” said Jones. “I was super stoked to be back at the Full Gas races, these are my favorite. The tracks were awesome. It got dry and dusty, but it’s summertime. What do you expect? I didn’t have any crashes. I was pretty amazed at that with how slick the conditions were. I had fun and got another win here, so I’m stoked.”

US ISDE Team member Brandy Richards, of Arizona, was third on an FMF/KTM. 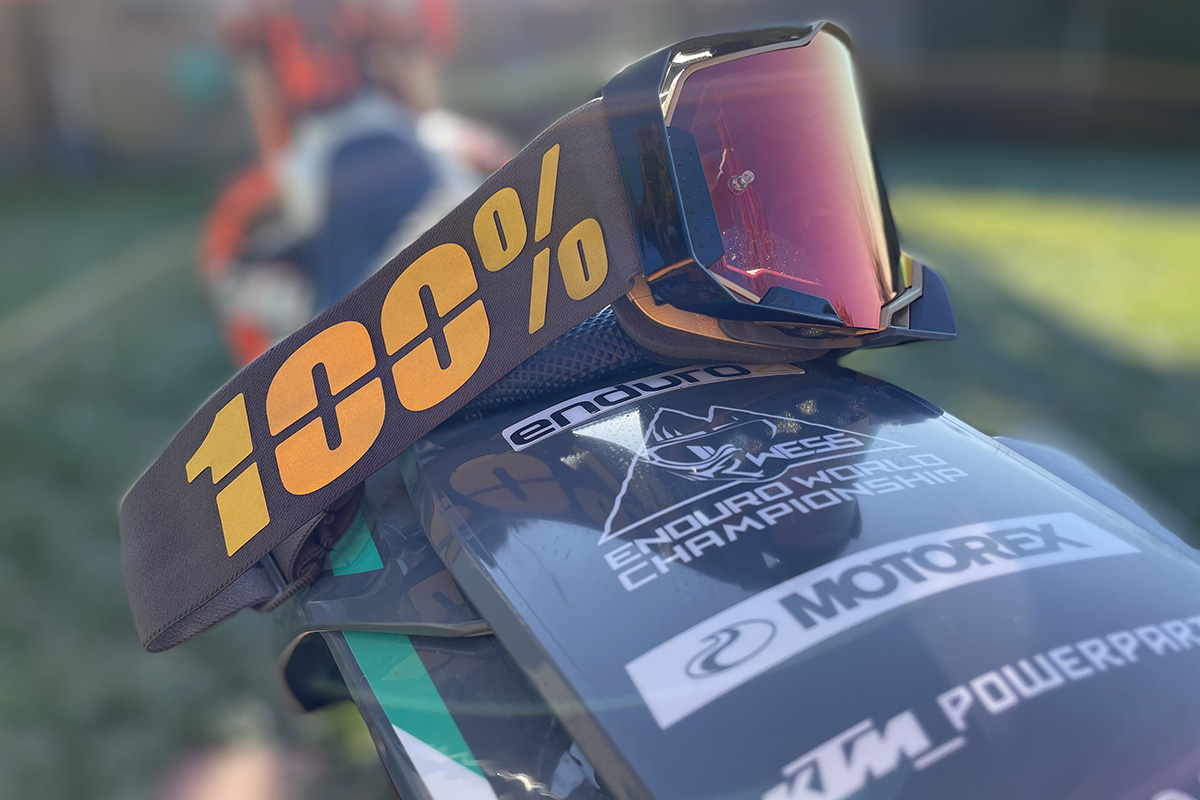