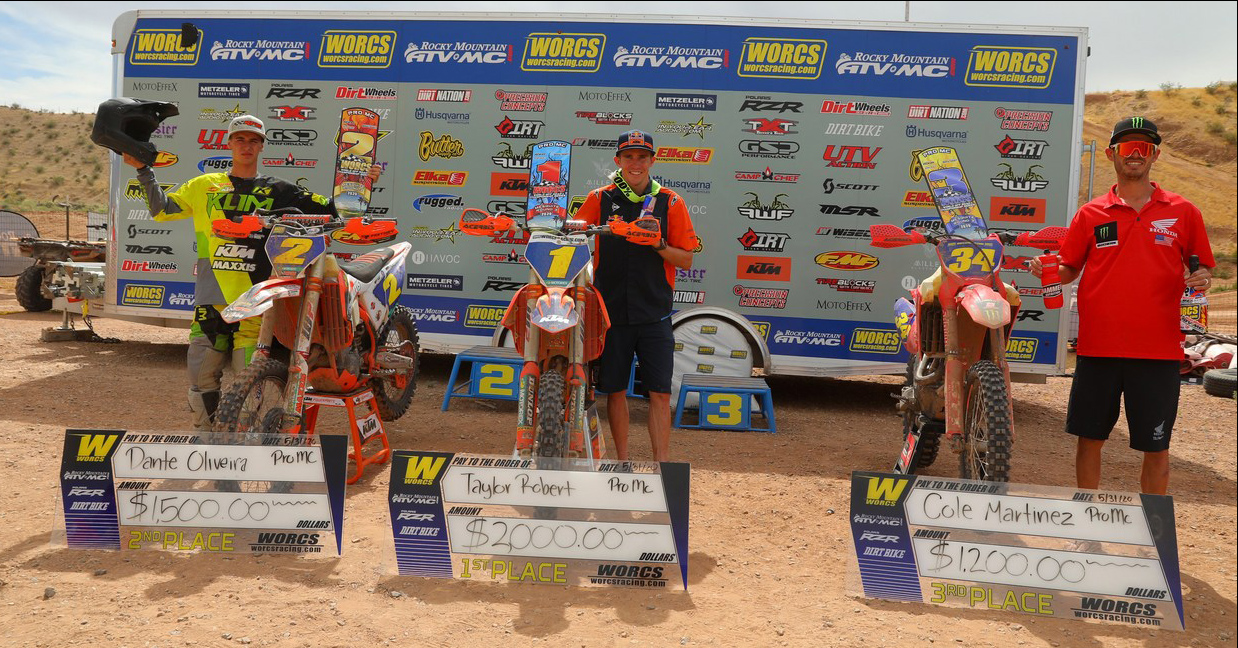 Taylor Robert pulled off his third victory of the 2020 season at WORCS round three, shrugging off 100 degree heat for a comfortable win ahead of Dante Oliveira…

As the west coast World Off-Road Championship Series (WORCS) joined the growing list of disciplines making their return to racing in Mesquite for round three the brutal heat proved to be a major element in the Nevada desert. Not that heat or the Covid-19 lay-off racing seemed to affect Taylor Robert who took the FMF KTM Factory Racing Team 450 XC-F into the lead from turn two and was never challenged.

Taking advantage of a clear track, Robert set a second a lap faster times in the opening laps, giving himself over a one-minute lead by the halfway point. The reigning WORCS Champ put in a “near flawless performance” to finish more than two minutes ahead of Dante Oliveira after 14 laps.

“I knew it was going to be a hot race and super physically demanding because the track is really sandy and tough.” Explained Robert after the race. “I got out front early on and set my own pace. I rode really strong and didn’t make any major mistakes the whole time so I was slowly able to inch my way away from the rest of the guys. It felt good to get back to racing and pick it up where I left off before the break in racing.”

Dante Oliveira finished in second place, his second podium of the season, ahead of Cole Martinez. Zach Bell had been running in second place but an electrical issue affected the Precision Concepts Kawasaki’s motor, forcing him to slow the pace and secure an eventual fifth place finish. “It felt good to be back at the races.” Said Bell. “To be back at one of the toughest rounds is always a humbling experience. The conditions were brutal.”

Pro standings after three rounds of 2020

WORCS round four has been postponed from June, the series resumes in September.

More information and results from all classes: WORCSRacing.com