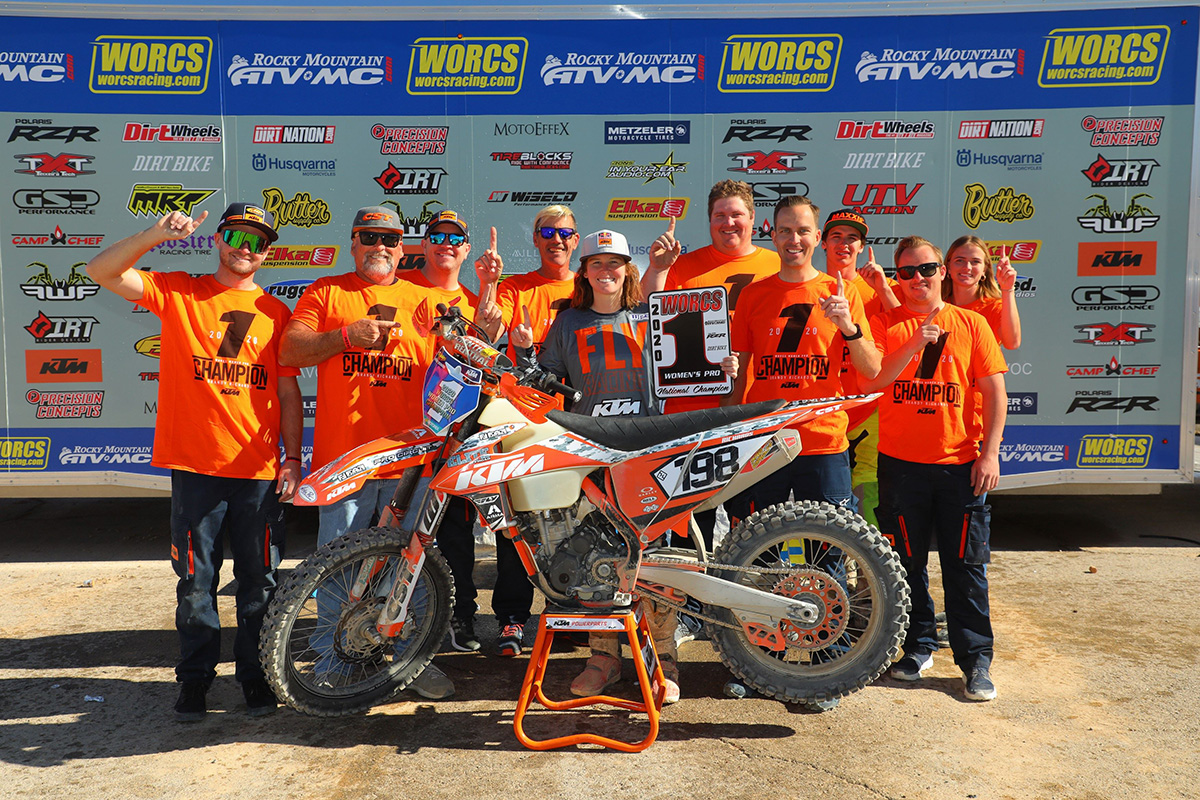 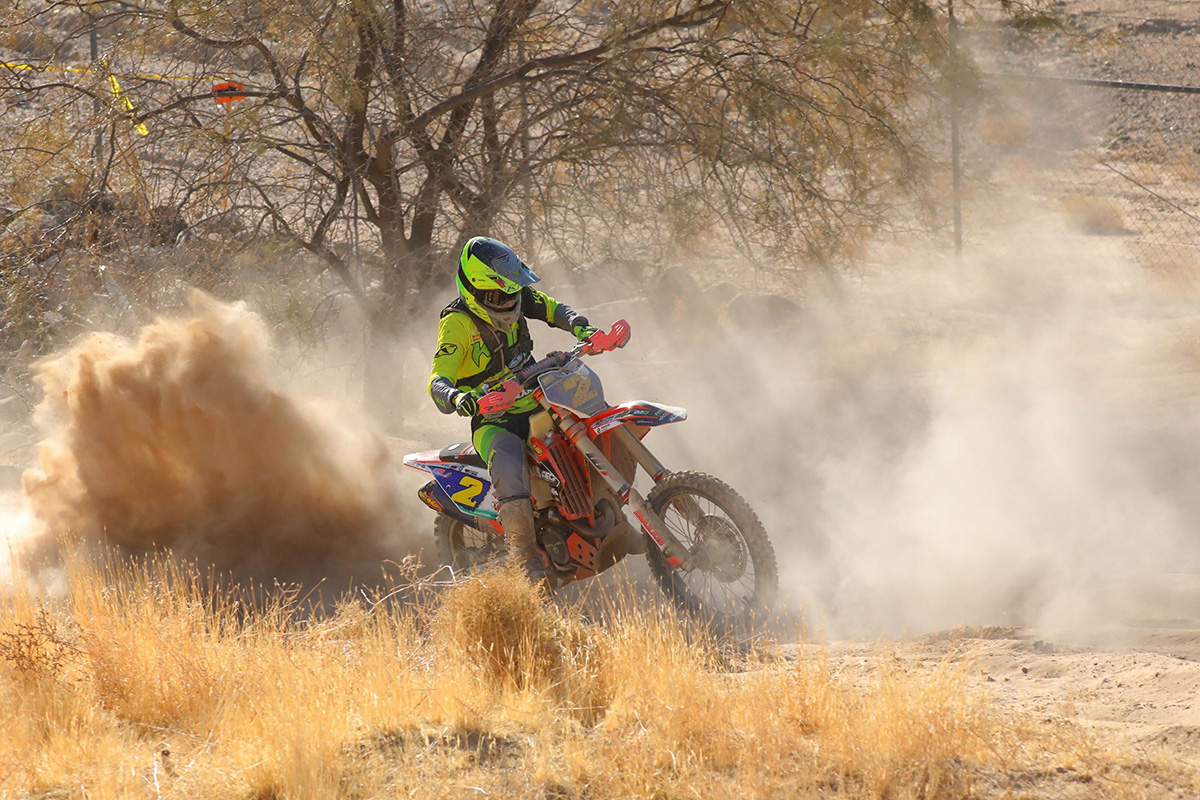 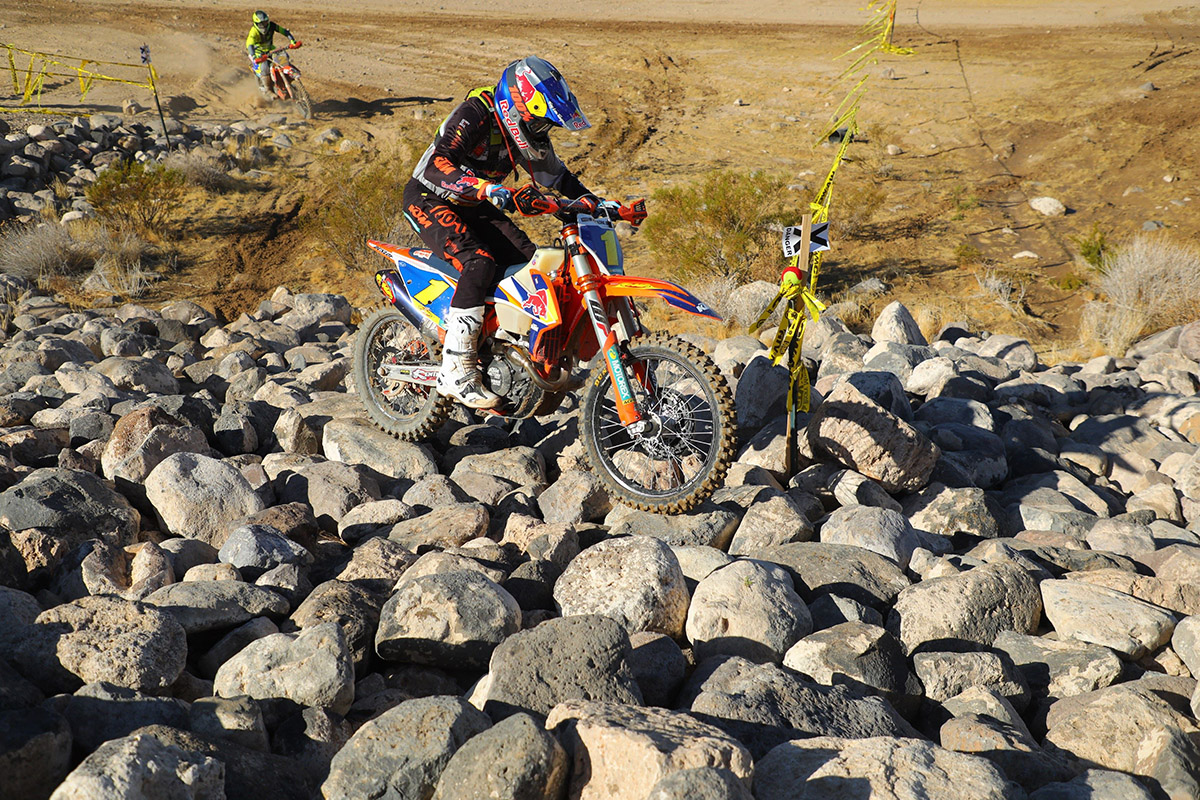 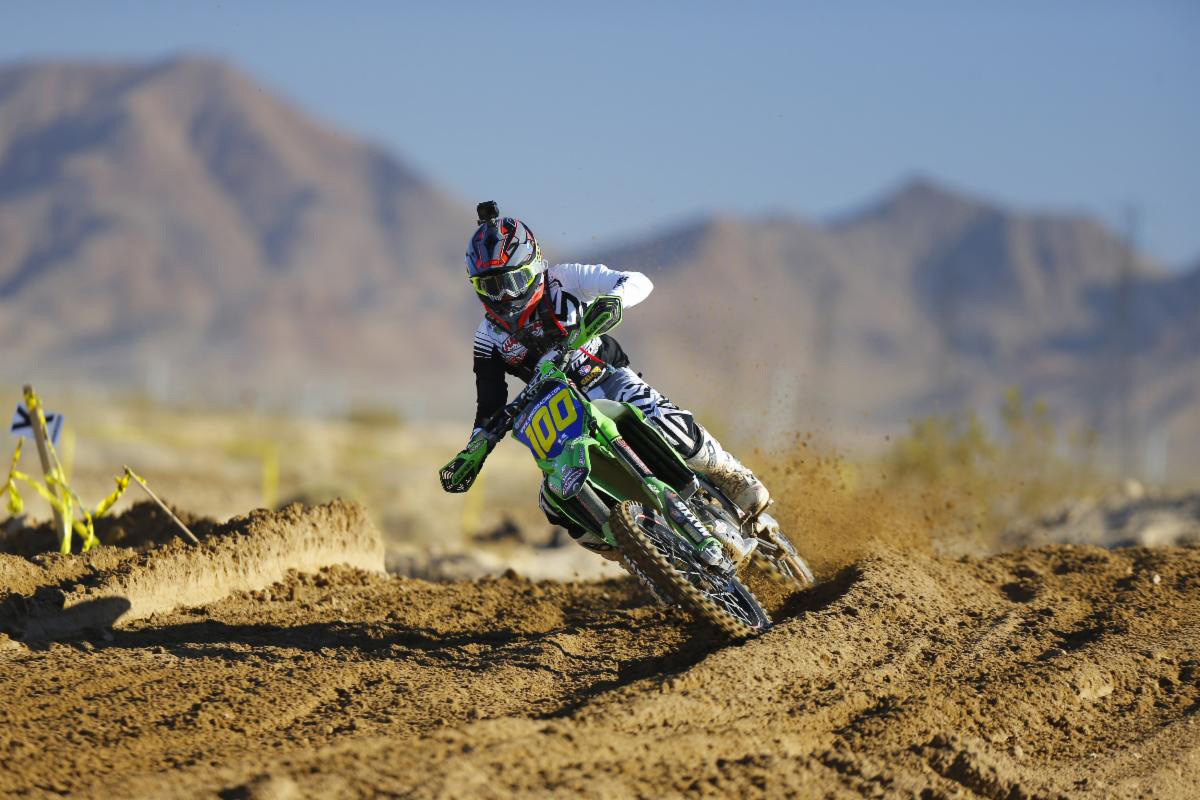 The racing got started earlier in the morning for slightly cooler temperatures and better visibility through the dust at the Primm course which featured a “pro only” technical rock section, which added an extra element of difficulty throughout the race.

As the green flag waved to start the two-hour Pro race, Zach Bell fired his Precision Concepts Kawasaki into the lead where he held station for most the lap until a rock wedged itself into his rear brake pedal. While Zach kicked the rock out, both Taylor Robert and Dante Oliveira to pass and the lead trio set the pace with Robert taking the lead for much of the early laps.

Ride POV onboard for the holeshot with Zach Bell...

Just after the pit stops, Oliveira retook the lead and then Robert made a mistake in the rocks allowing Bell past. Robert spent the next couple of laps chasing Bell and he eventually made his move on lap 10 by which time Oliveira was way ahead, leaving defending champion second on the day and Bell, who was struggling with a broken clutch lever, in third.

“I was riding the rock pile really well all day and that one lap I dropped my front wheel in a hole and it just ejected me over the front and it kind of rocked me a little bit.” Explained Robert. “It scraped up my chin and shoulder and the bike was a little bent up so it took me about a lap to get going again. I started doing the rocks really well, which allowed me to get back by Zach but I didn’t have enough in me to catch back up to Dante.

“I’m a little bummed on the fact because I could have wrapped up the championship today but I’m one-point shy right now. So, now we’ll go to Havasu and try to win because that’s always the goal.”

Thanks to the Rekluse Radius auto clutch, Zach Bell was still able to hold a pace strong enough to take his first WORCS podium finish of an injury affected season. “The whole weekend went smooth.” Says Bell. “I got off to the hole shot…[but…had a rear brake issue the first lap with a rock getting stuck in the pedal. I got that fixed and just rode in third for the first hour.

“Right after the pit I made the pass into second and was charging up to Dante for first. I got up close to him and a rock came up and hit my clutch lever and broke it. Thankfully, I had the Rekluse [Radius auto clutch], but it was still tough in the rocks. I couldn’t get through them as well and was falling a lot. But I was able to salvage a third.”

With his second overall-win in 2020, Oliveira holds a steady second position in the Pro Championship where he has proven to be Robert’s most consistent opponent this season.

Team RPM KTM and Mateo Oliveira to the double

It was a good day for the FMF/RPM/KTM Racing Team as Mateo Oliveira took his fifth win of the season in the Pro 2 class, where he holds a favorable points lead heading into the final round. In the Pro 2 Lites division, KTM-mounted rider Will Riordan finished on the podium with a consistent third-place performance on Sunday.

KTM-Supported rider Brandy Richards finished P7 in the Pro 2 Lites class, in addition to wrapping up the Women’s Pro Championship for the fifth time with another convincing win to extend her perfect streak in the class this season.

7. Brandy Richards, KTM (who was earlier in the day crowned Women’s Champion for the fifth time)

The final round of the series heads to Lake Havasu on December 4-6.