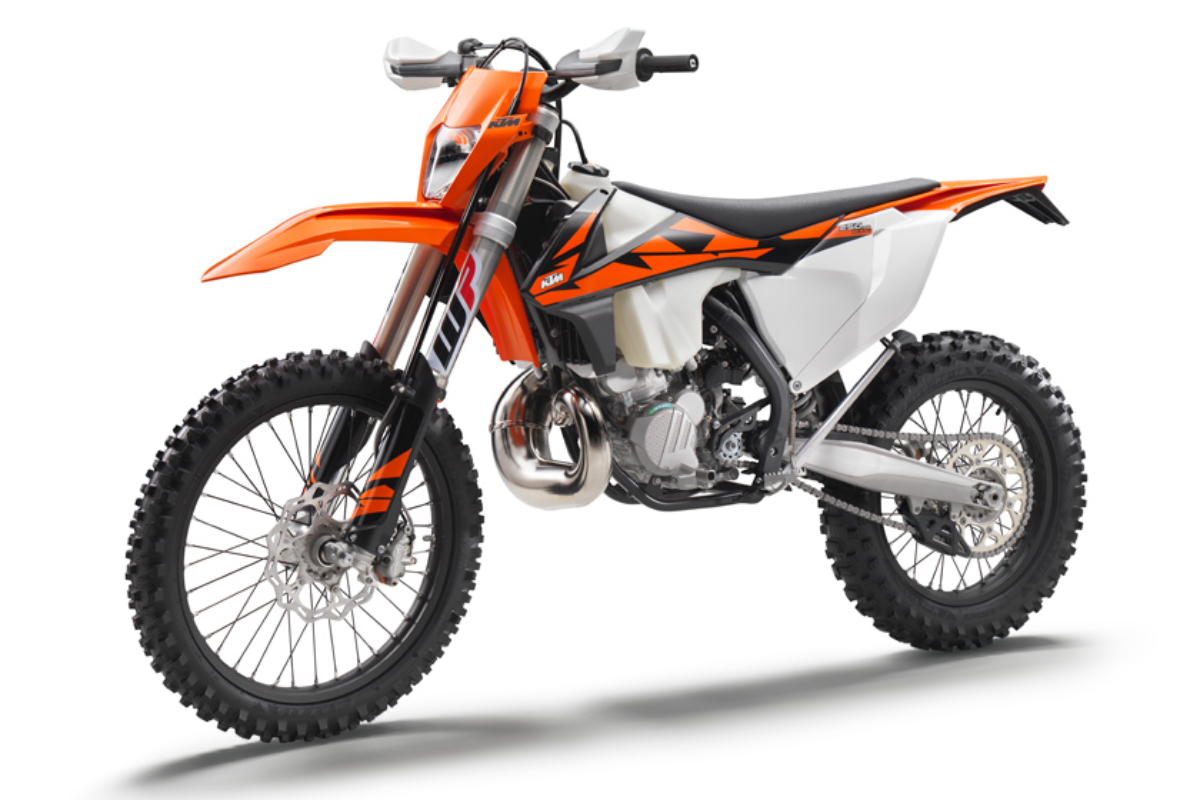 The wait is over as KTM officially release their 2018 fuel injected two-stroke EXC TPI enduro bikes to the world’s media in Austria.

The TPI technology — transfer port injection — has been developed by KTM in close co-operation with EFI specialist Synerject. Turning the 2-stroke world upside down, it makes engine operation not only remarkably cleaner, but also provides a more consistent performance.

While engine power remains at the same level, the power delivery is much more homogeneous. Compensating automatically for air pressure and temperature, there is no need to set the TPI bike up for the elevation and weather of the race location. Premix fuel with 2-stroke oil is also a thing of the past, and the fuel efficiency increases dramatically. 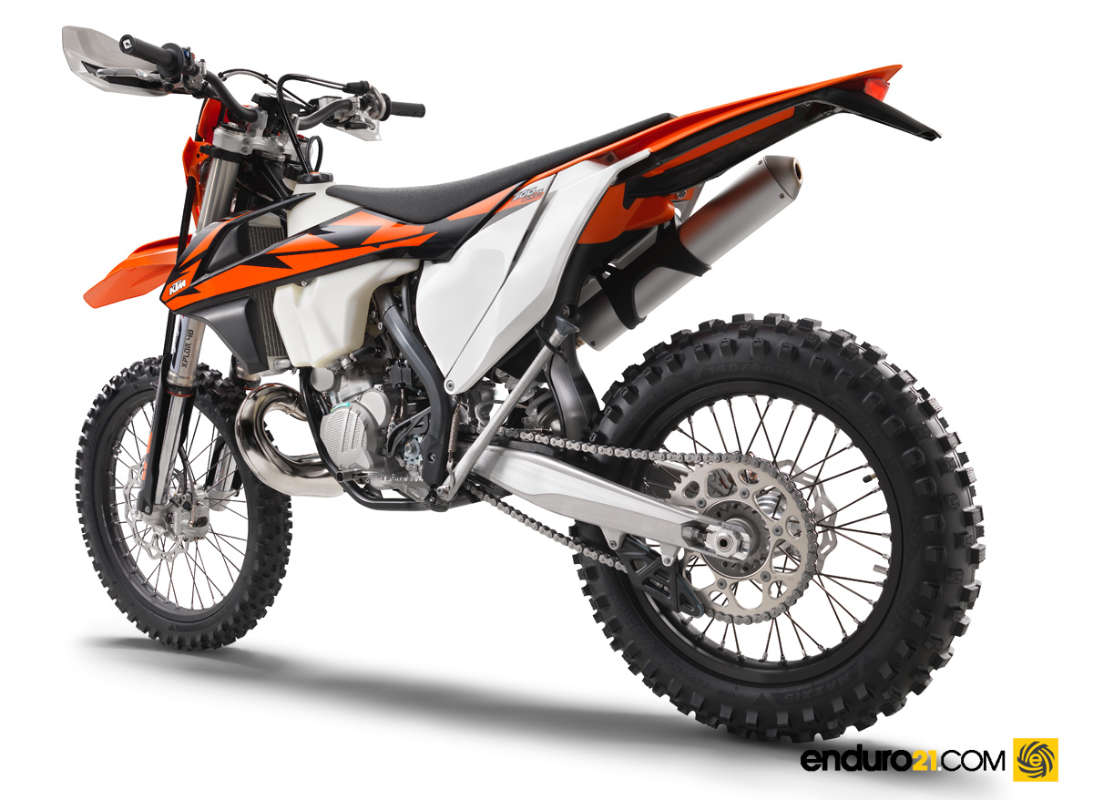 While KTM introduced their new EXC generation in 2017, they go one step further in 2018 with the introduction of fuel injected technology in their 250 EXC and 300 EXC two strokes.

Set to be a game changer, the TPI models are the world’s first 2-stroke, offroad competition bikes with serial, electronic fuel injection.

“TPI” stands for “transfer port injection”, and the groundbreaking new two-stroke represents another major step forward on a global scale.

KTM say the benefits to owners are huge improvements in fuel efficiency and clean exhaust emissions, while the electronics do away with the need for re-jetting, no matter the elevation of the race venue and prevailing weather conditions.

Also, engine lubrication on the TPI models is automatic from a separate oil tank and electronically controlled oil pump, negating the use of the traditional two-stroke pre-mixed fuel-oil mixture.

Transfer Port Injection — how it works 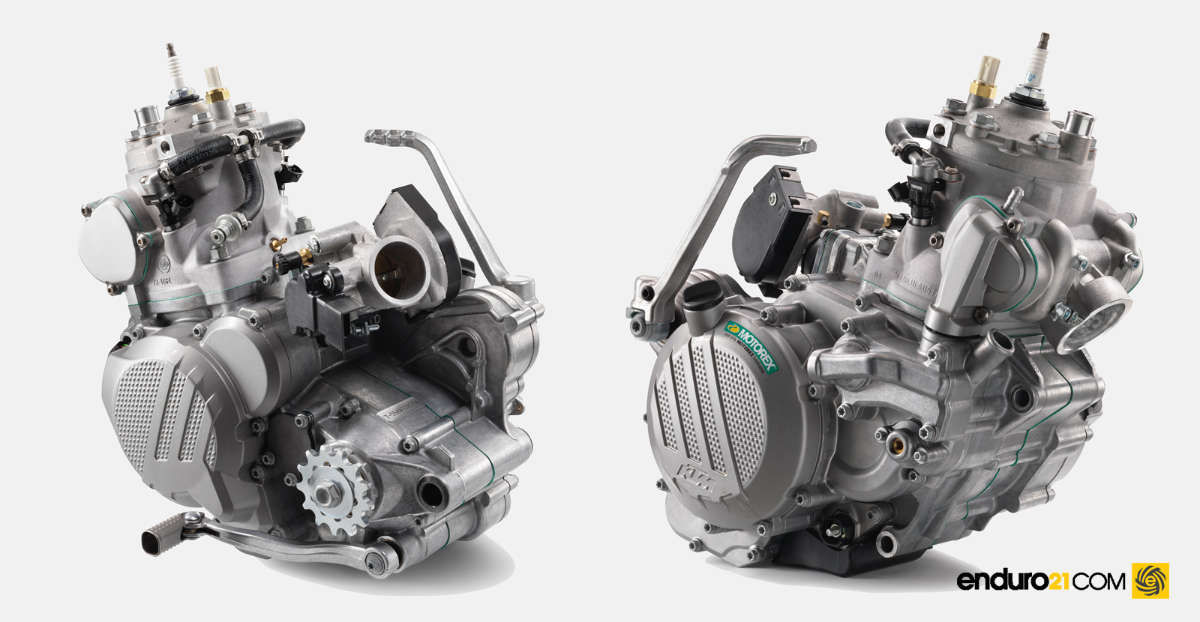 Lubrication is taken care of by an automatic system with a separate oil tank and electronically controlled oil pump instead of using premix.

Intake air data is provided to the engine management system by a throttle position sensor, while an adjusting screw allows the idle speed to be set. A cold start device is also provided, opening a bypass to supply extra air.

Oil supplied by the automatic oil pump via an oil suction pipe is mixed with the incoming air to lubricate the moving engine parts.

An oil pump mounted underneath the oil tank delivers the lubricant to the throttle body, where minute quantities are mixed with the incoming air in order to lubricate the moving engine parts.

Using engine speed and throttle position sensor data, the engine management system’s precise electronic control of the oil pump ensures the perfect amount of oil for any given conditions, loads and engine speeds is added.

The filler cap assembly for the oil tank is located between the fuel tank and steering head, utilising a hose in the upper frame tube to conduct the oil to the storage container. Automatic, electronically controlled oil injection reduces exhaust smoke by up to 50% over conventional pre-mix lubrication, with an average fuel-to-oil ratio of 1:80. This means the oil capacity of about 0.7 litres is sufficient for at least five tanks of fuel. 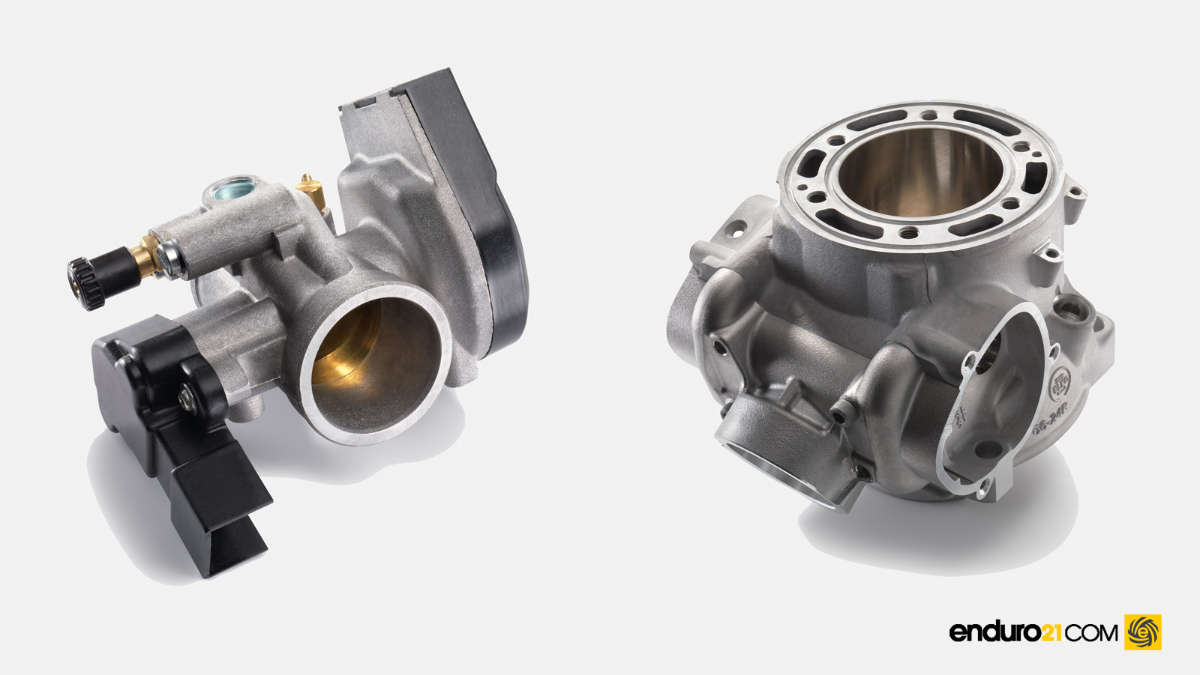 The core dimensions and layout of the TPI cylinders are carried over from the carburetor model with bore diameters of 66.4 and 72.0 mm, respectively. However, the new cylinders feature two lateral domes holding the fuel injectors that inject fuel into the rear transfer ports.

This downstream injection atomises the fuel with the upstreaming air for a highly efficient combustion and significantly reduces the loss of unburned fuel.

The engine management system’s intake pressure sensor is connected via a small-diameter tube in the back of the cylinder. For a smooth and well-controlled power delivery, the exhaust control of the carbureted EXC models is also retained.

Based on a newly developed electronic control unit located below the seat, the new KTM EXC TPI models feature the most modern engine management system (EMS) of any 2-stroke offroad motorcycle.

Utilising various sensor data such as intake and ambient air pressure, throttle valve position and water temperature, the control unit optimises ignition timing and the amount of fuel to inject. Automatic altitude and temperature compensation, eliminates the need for the rider or mechanic to set up the bike for the prevailing environmental conditions.

An accessory radiator fan from the KTM PowerParts program will be controlled directly by the EMS without the need for an aditional temperature switch. An optional map select switch (standard on the SIX DAYS models) allows the rider to select an alternate map, providing a smoother power delivery. 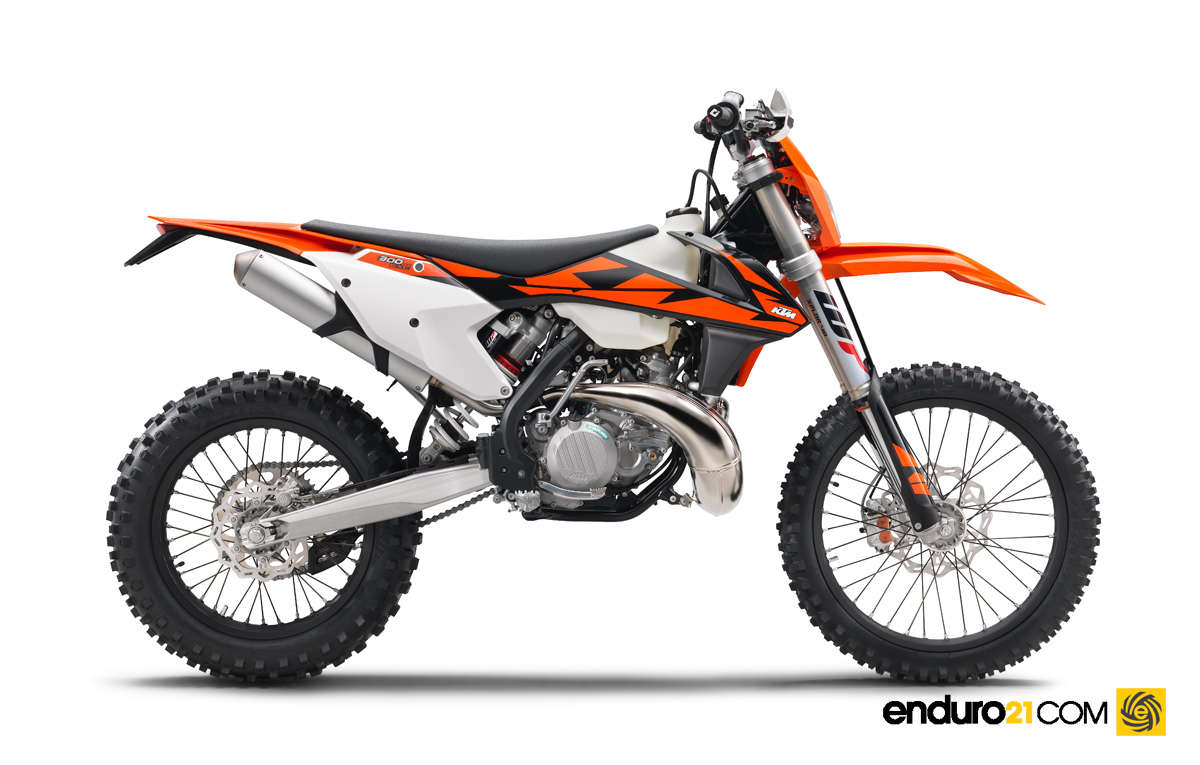 In order to accommodate the power requirements of the upgraded engine management system, the TPI models are fitted with a more powerful generator, rated at 196W, just like on the EXC-F 4-stroke models, as well as the EXC-F voltage regulator.

For optimal mass centralisation, the lightweight, die-cast crankcases hold the clutch shaft and the crankshaft in a high position close to the centre of gravity supporting the handling of the bike.

In addition, this design allows the implementation of a lateral balancer shaft to minimise vibrations, enhancing comfort and reducing rider fatigue during long and demanding enduro events and rallies.

The diaphragm spring also leaves sufficient space for a damping system integrated into the clutch hub, which benefits both traction and durability.

The hydraulic Brembo clutch mechanism is synonymous with a light action and highly controlled clutch modulation.

The 6-speed transmission features widely spaced gear ratios optimised for enduro. The KTM ‘No Dirt’ gear shift lever design prevents residue from blocking the joint of the gear shift lever for safe and reliable shifting in any conditions.

The EXC TPI models are equipped with E-starters located in a well-protected position on the undersides of the engines. A powerful but lightweight lithium ion battery provides convenient and reliable starting.

The rear subframe made of lightweight aluminium sections is connected to the frame with four bolts and weighs 900g. 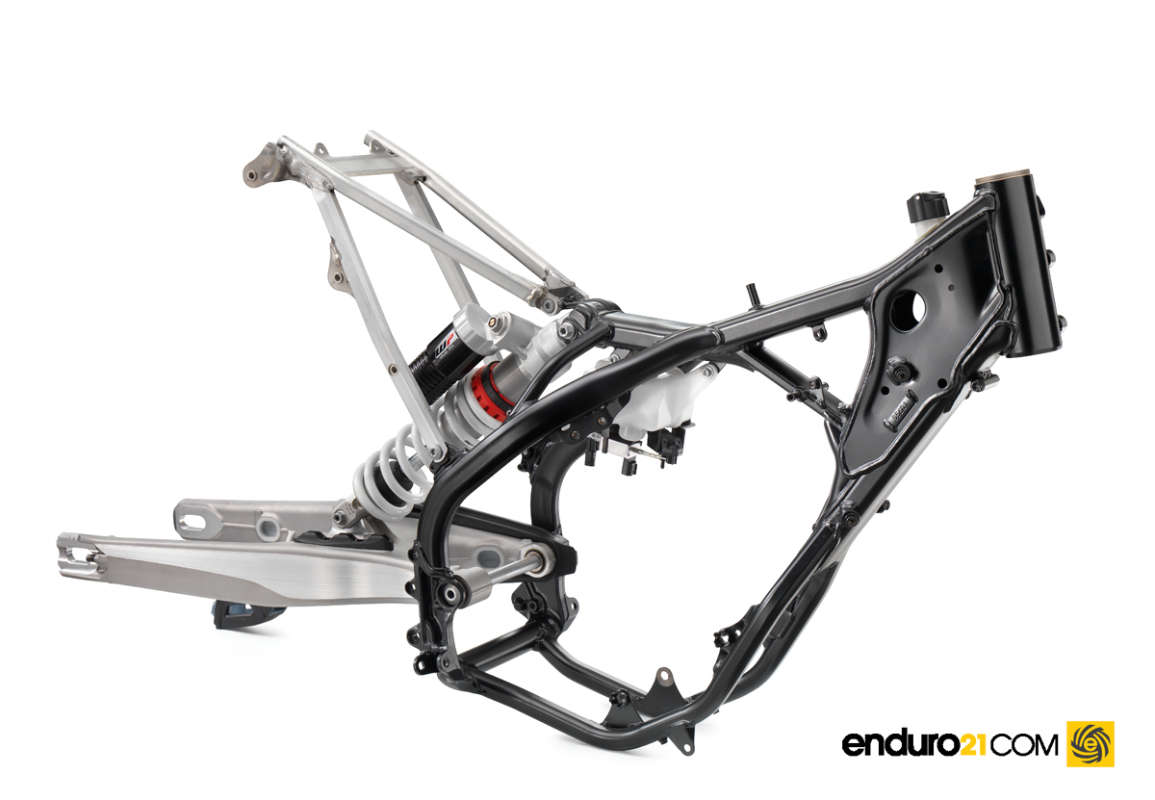 The frames of all KTM offroad models are manufactured from lightweight sections of top-quality chrome-molybdenum steel tubing of various cross sections. This type of frame design provides high torsional rigidity for best handling and rideability, while a certain longitudinal flexibility can absorb the wheel impact energy, supporting the suspension for reduced rider fatigue.

At the same time, the frame triangle serves to deliver the coolant from the cylinder head directly to the radiators.

In the TPI models, the modified frame design also serves to route engine oil from an added filler cap assembly, located between the fuel tank and the steering head, via a hose inside the upper frame tube to the oil tank. 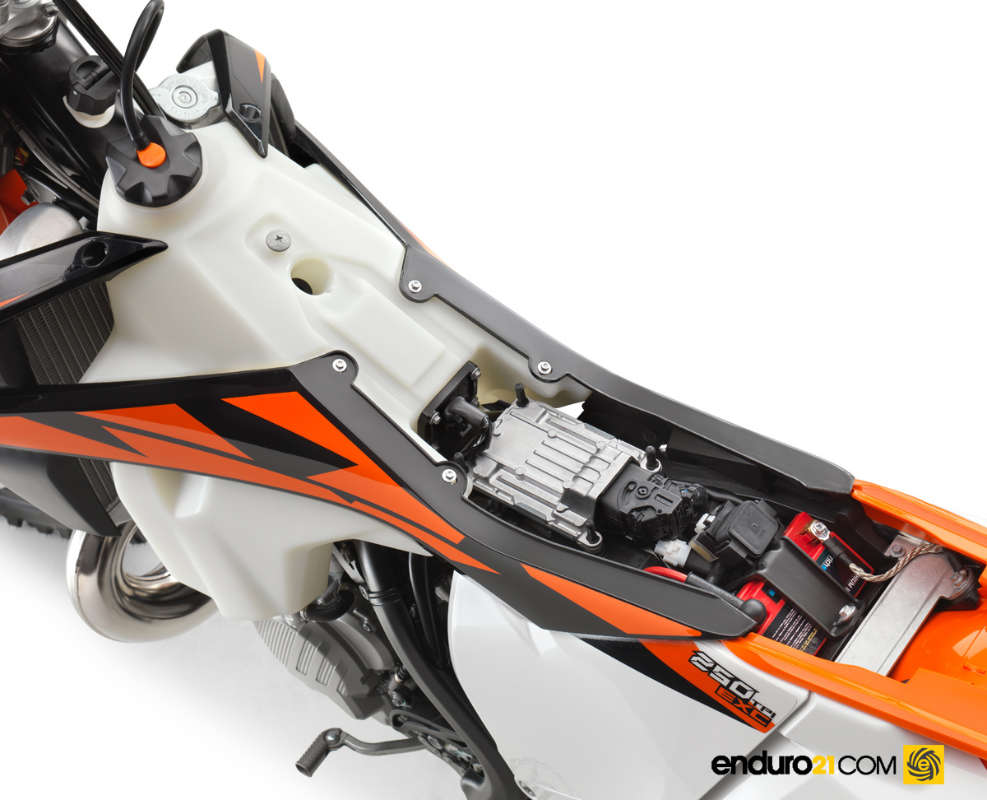 Along with the new injection system, the TPI models receive a new, 9L tank with an integrated fuel pump system like the 4-stroke bikes and an additional fuel level sensor. All KTM EXC models feature lightweight, translucent polyethylene fuel tanks that make it easy to gauge the fuel level from the outside.

In addition, the new TPI 2-stroke models are fitted with a new velocity stack to match the throttle body while at the same time accommodating an intake air temperature sensor.

The European stage 4 emission standards for motorcycles have been in effect since January 1, 2016, using the World Motorcycle Test Cycle (WMTC) and once again establishing stricter limits for motorcycle exhaust emissions.

Thanks to the highly efficient combustion control of the TPI system and precise automatic engine lubrication, the new KTM EXC models will be Euro-4-compliant, not the least due to their significant reduction of hydrocarbon emissions.