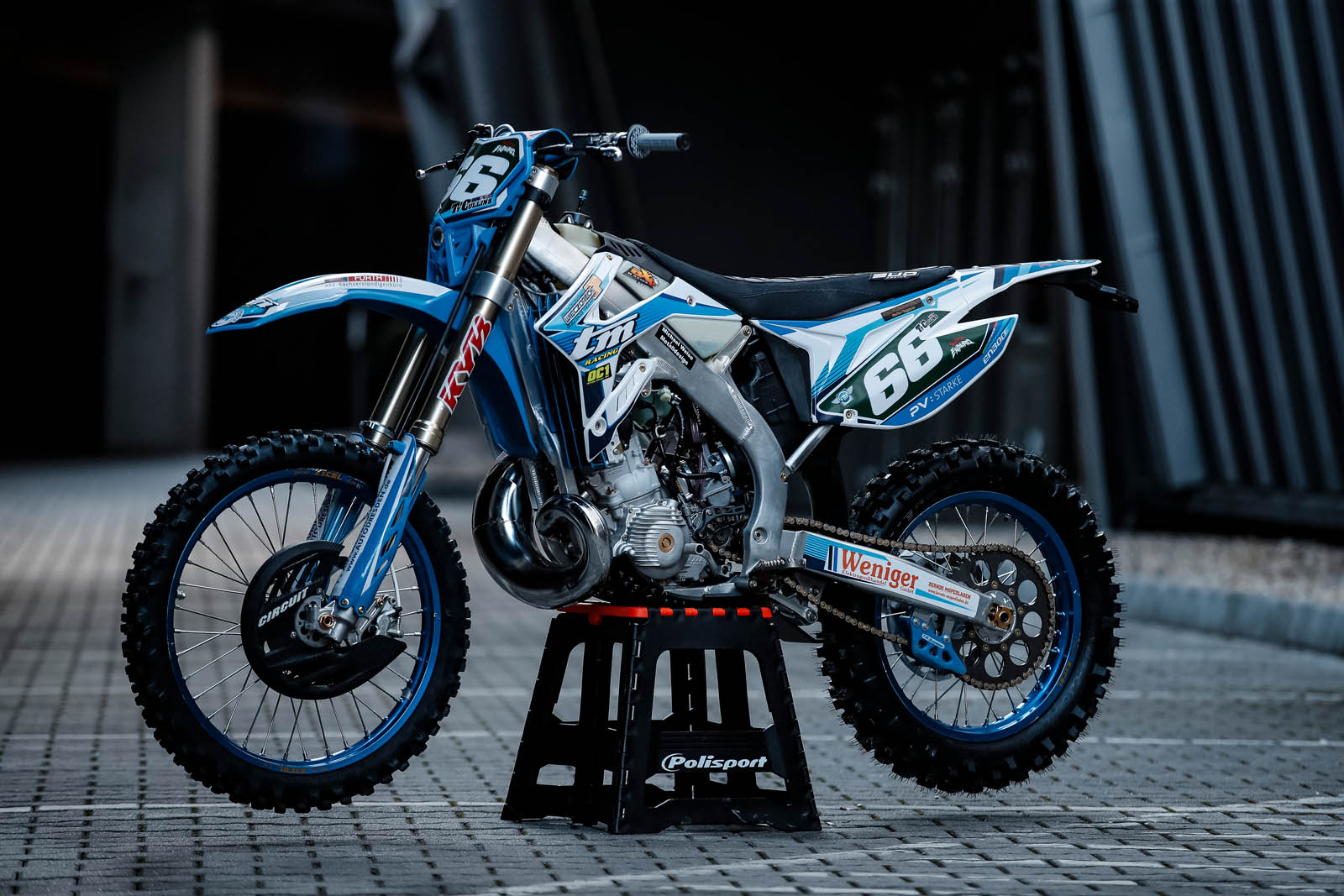 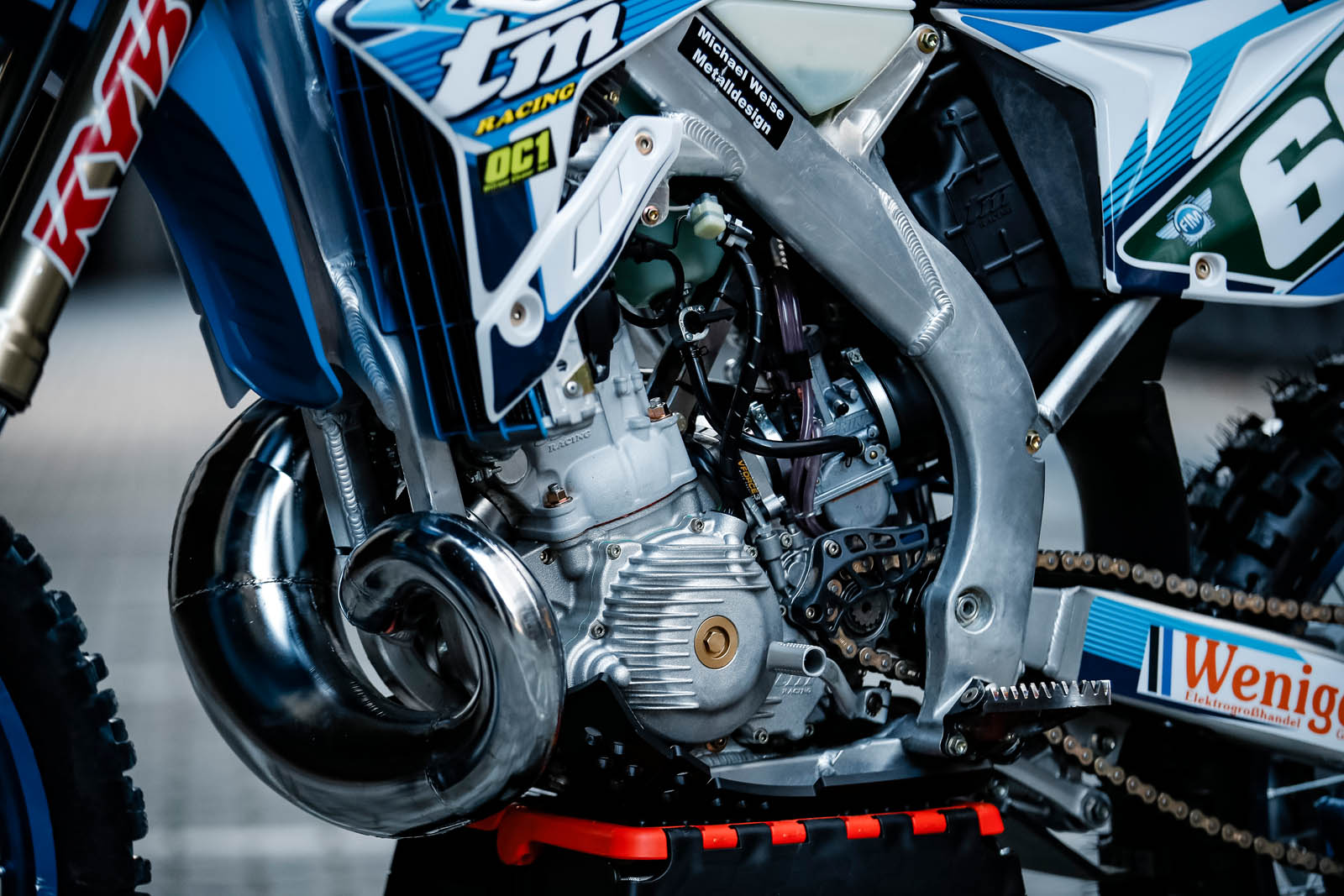 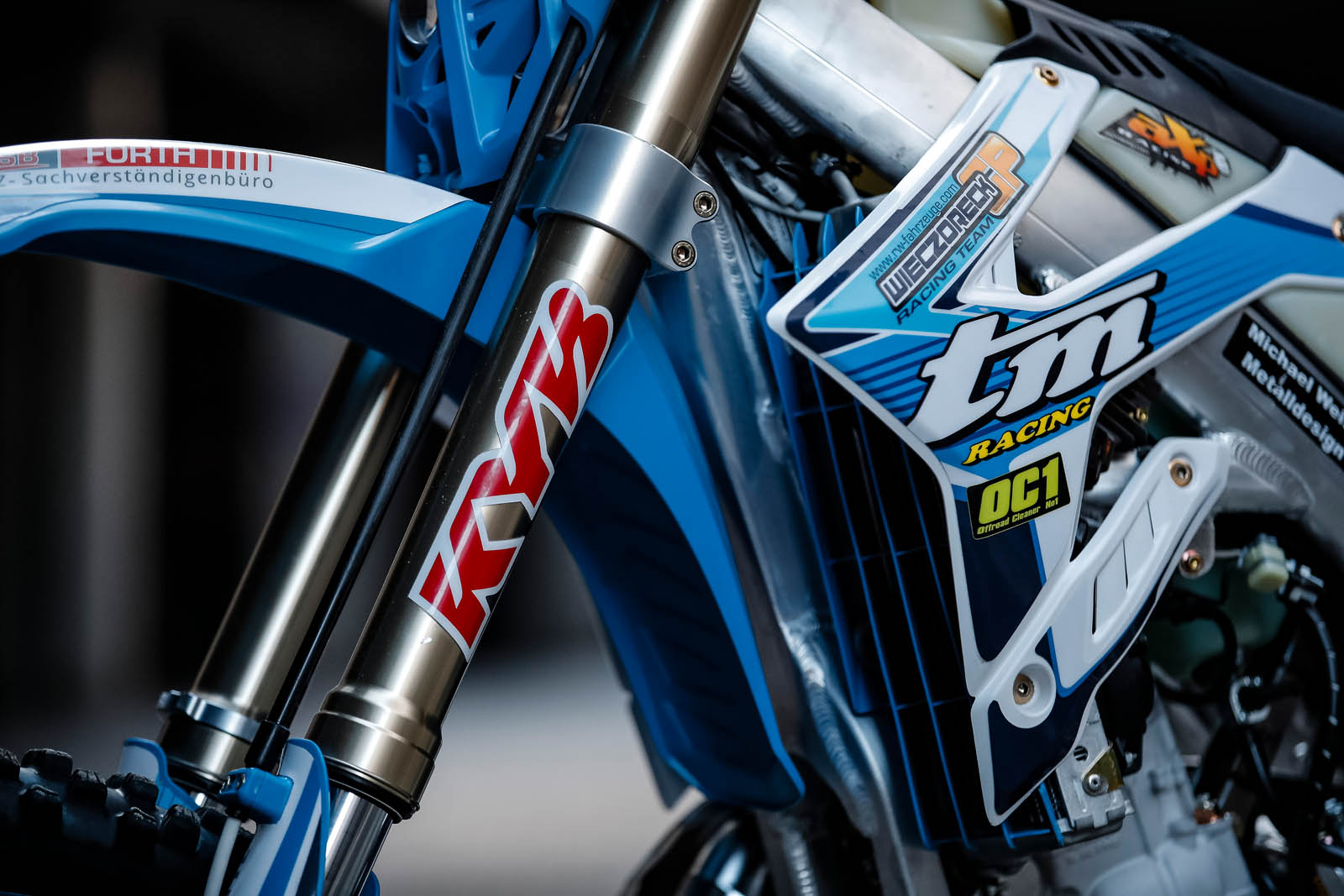 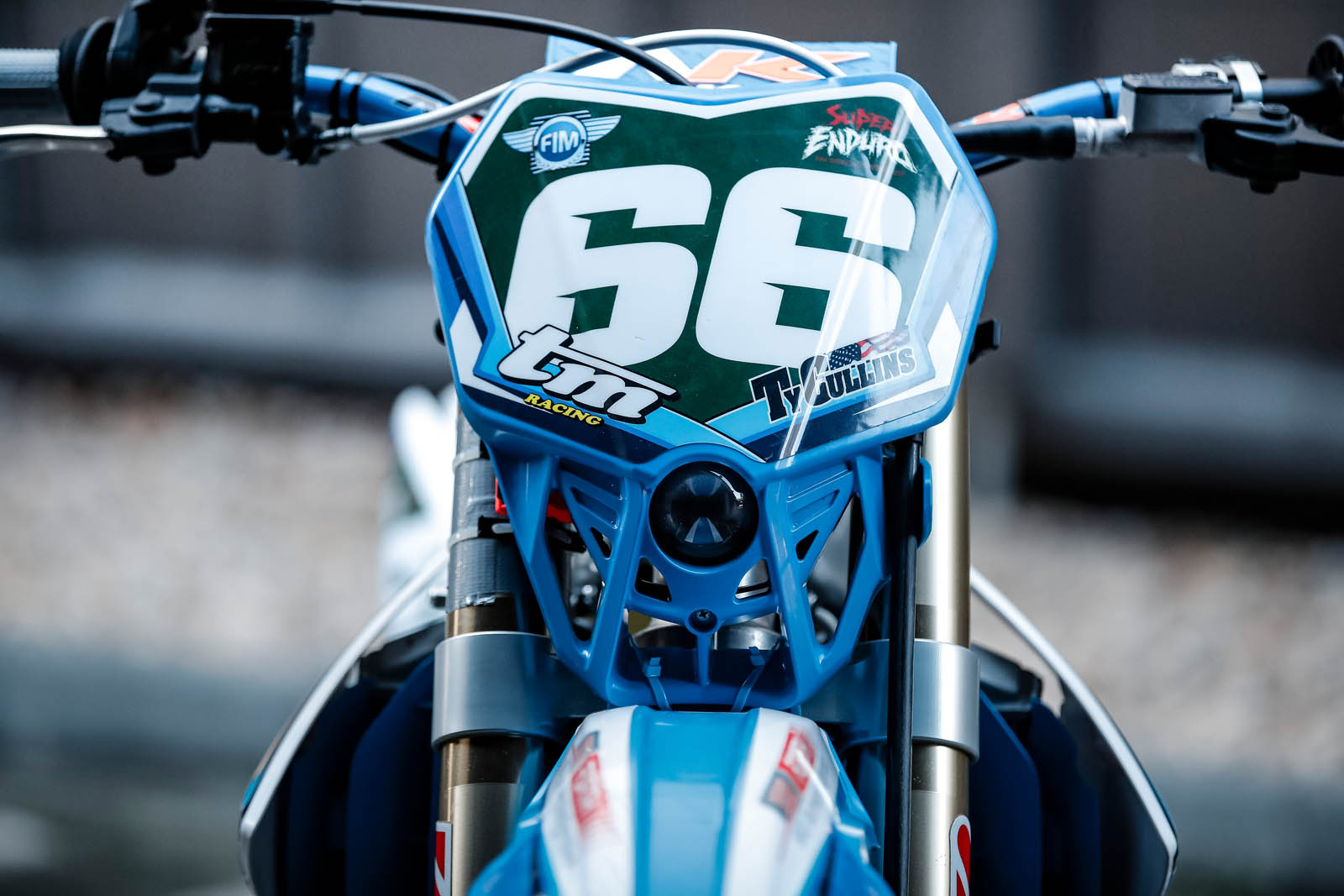 The TM Racing EN 300 two-stroke Ty Cullins is contesting the Junior SuperEnduro World Championship gets a closer look under the Enduro21 My Ride microscope.

The 2020 SuperEnduro World Championship is short on a couple of items this season - Americans and TM Racing motorcycles. EnduroCross Junior Champion, Ty Cullins and his Wieczoreck GP Racing Team are making amends for those issues blazing a trail through the Junior series and making their presence felt with overall GP wins and a turn holding the covetted leaders red plate.

Recent rounds have proved how hard and unpredictable the Junior class can be for riders with a host of gremlins keeping Cullins from achieving the results he expects of himself. But they remain in the thick of the action and title contenders with one round to go in Poland, March 14. 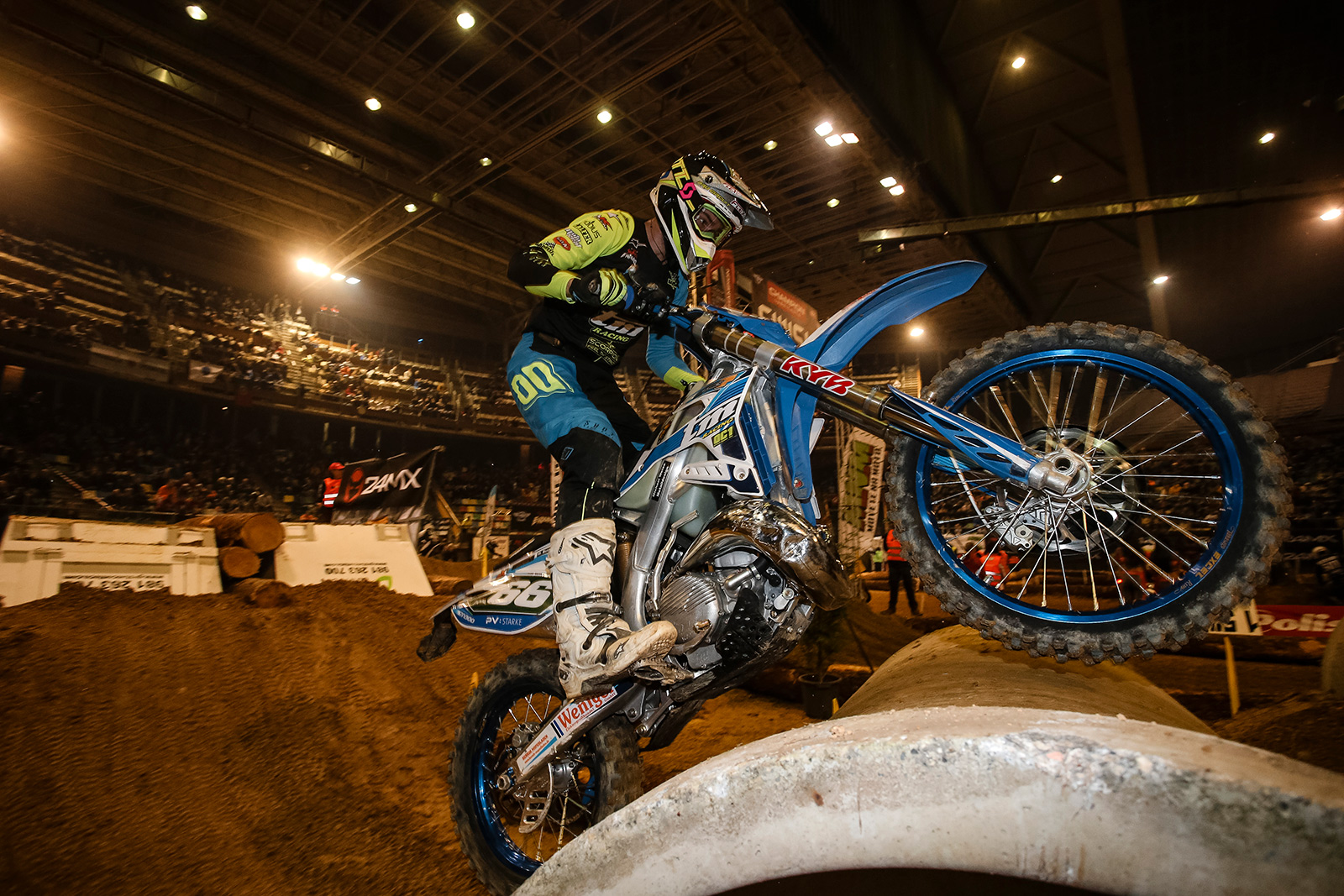 Cullins will need little introduction to the US readers having taken the EnduroCross Junior title rubbing bars with Cody Webb and Colton Haaker for the US TM Racing team.

The Wieczoreck GP Racing Team are equally no strangers to the indoor SuperEnduro where they have fielded Benjamin Herrera in recent seasons. The team run under the experienced wing of Mike Schmidt, the German and Austrian TM Racing importer who has a wealth of experience in different off road sports stretching back to the 1970s.

That's enough about the people, what's so special about the 300 two-stroke Ty Cullins in racing in the Junior SuperEnduro World Championship? 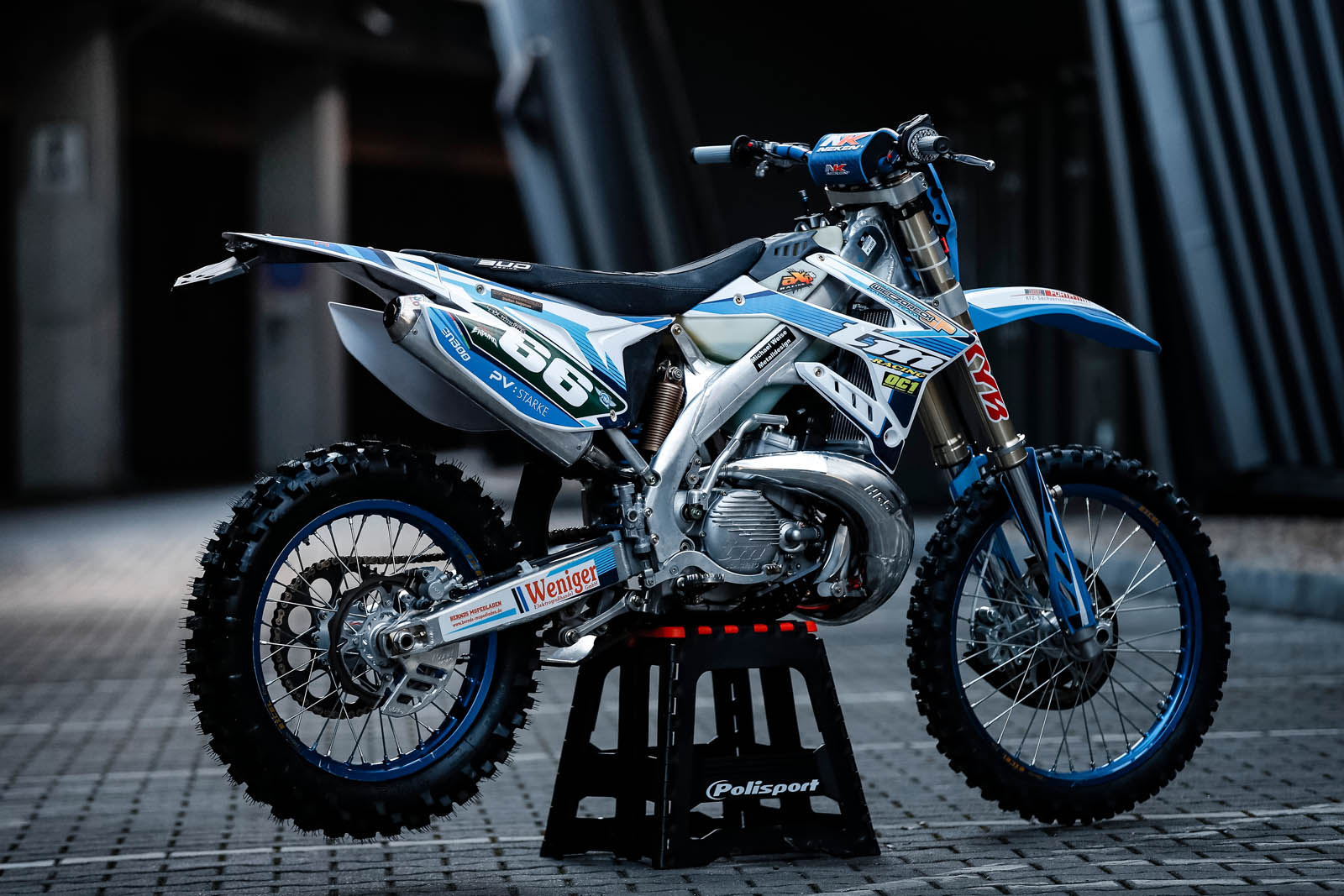 One of the truths about Italian manufacturer's production motorcycles is they roll away from dealers as fully formed race bikes. The EN 300 ES 2T Ty Cullins is racing for the Wieczoreck GP Racing Team is no exception and as we catch up with them at the Hungarian GP it is the first fact they tell us about the bike - she's pretty stock really.

TM motors are notoriously strong and the 300 two-stroke is a beast that needs no tuning. Cullins is running the standard engine, air box and filter plus the standard HGS exhaust system - no changes are needed they tell us.

...you can go much leaner indoors and it's tuned so you have more response when you open the throttle...

The only difference is the carburettor and jetting which runs a “special setting” to suit indoor racing and SuperEnduro tracks. “It’s a specific setting for the indoors,” explains Mike Schmidt of TM Racing Germany, “you can go much leaner indoors and it’s tuned so you have more response when you open the throttle, but that’s the only change compared to the standard engine.”

In fact they are running the same setting Benjamin Herrera used in 2018. “After working with him we knew what worked so it makes things easier.” Adds Schmidt. 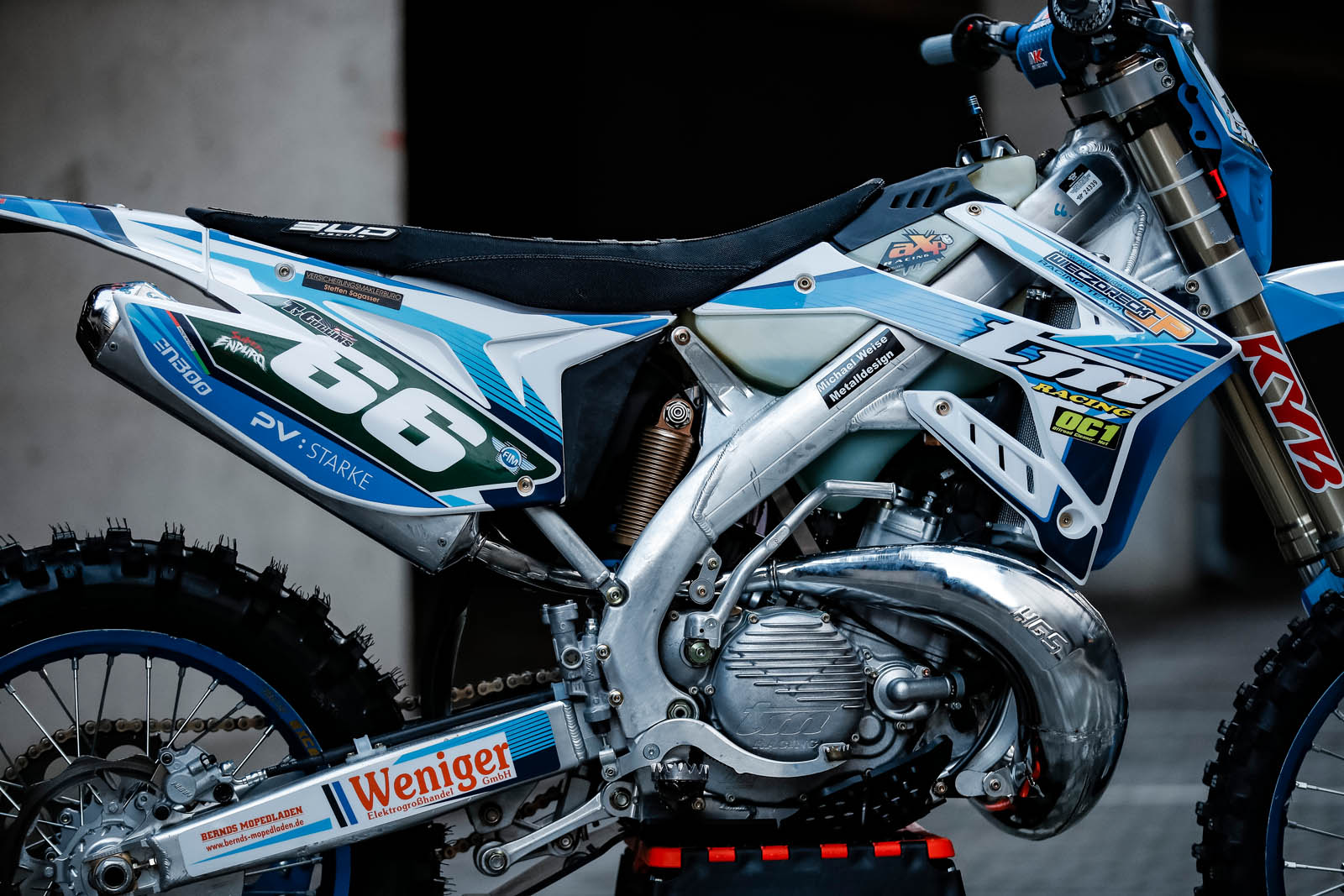 The Wieczoreck GP Racing Team admit they’ve tried a few different final drive gearing options during the 2020 season but basically it’s smaller in the front and bigger in the back. “The standard bike we raced in previous seasons was 13-51 but Ty uses 12-53.” Confirms Mike. “We never used this combination but Ty wanted it like this.”

Suspension by US off legend, Ty Davis

“The fork set up is nothing too special, more like a general off road setting, kind of good for everything.” Explains Cullins about his personal bike preferences with the springs and dampers. “I could take this bike and ride motocross or a GP at home and it’ll work.”

The KYB suspension is actually the set Cullins uses back home in the US which he shipped over at the start of the 2020 season in Poland. US off road legend Ty Davis does the work on the suspension – that’s Ty Davis of ZipTy.com fame.

What about that set-up though, surely it has something different to hit those logs so damn hard? “I normally like my forks a little bit stiffer than the shock because I don’t like it when they bottom out when I land a jump or hit something hard.” Explains Cullins. “I’m particular with the fork, when going through the rocks I don’t like the front end to bounce around I like it to go straight.”

Hauling all your bike parts over from the USA might seem like hard work but when you know your set-up works then why wouldn’t you? “To bring the parts from home was always a plan.” Ty tells us. “Really, I only brought the suspension from there. Most the other parts got sent to the team and they put them in the bike.” 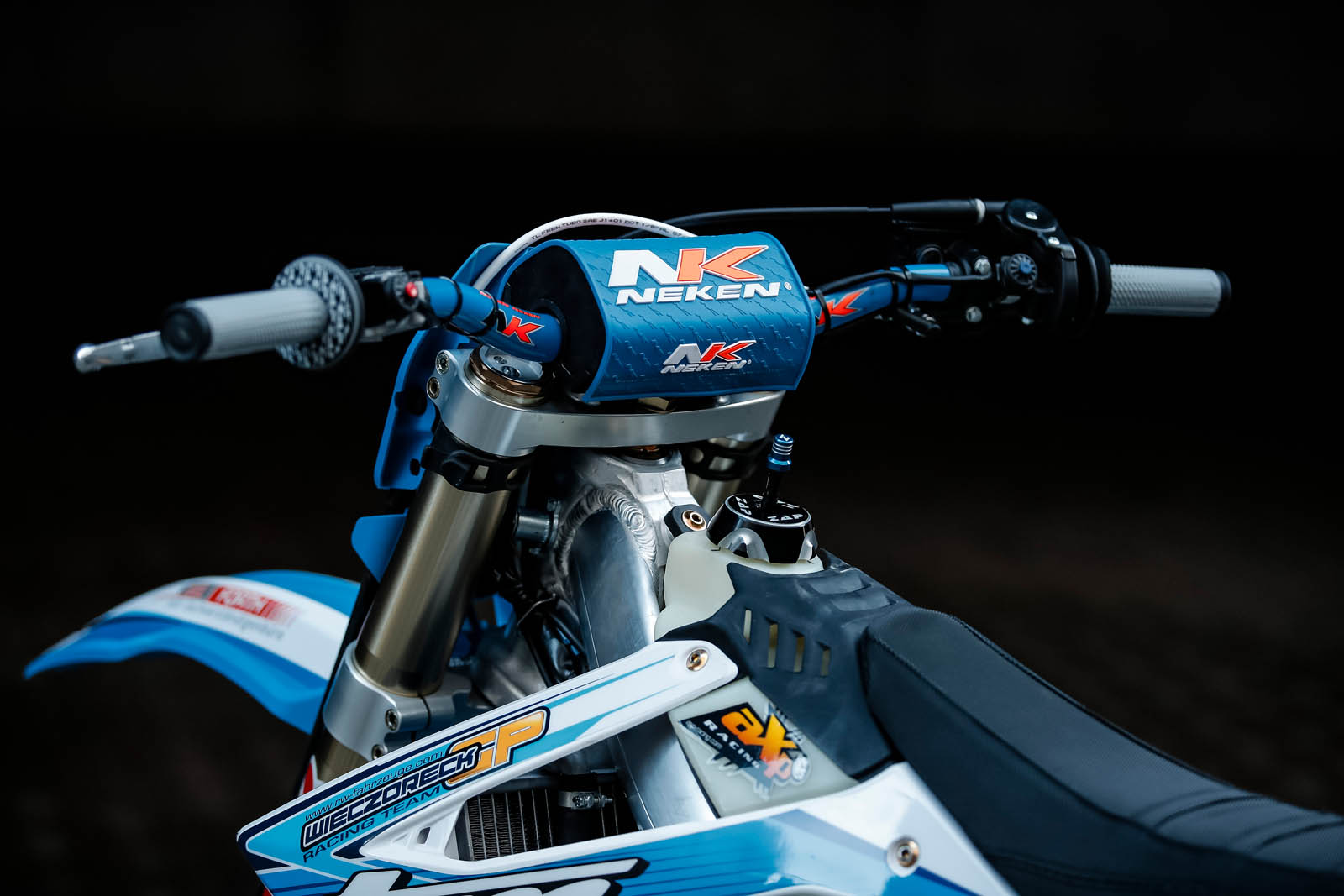 Those include a sprinkling of parts which the keen-eyed will notice are fitted to a number of bikes running in SuperEnduro, EnduroCross as well as major extreme and hard enduro events on the world stage.

Like the AXP bash plate complete with the suspension linkage protector extending from the back of the lightweight but tough skid plate.

The seat is standard (shaped foam) but the Bud Racing cover is custom fitted by the team – Ty claims it makes minimal difference to him personally indoors because the extra grippy design doesn’t see any wet mud but it does look good! 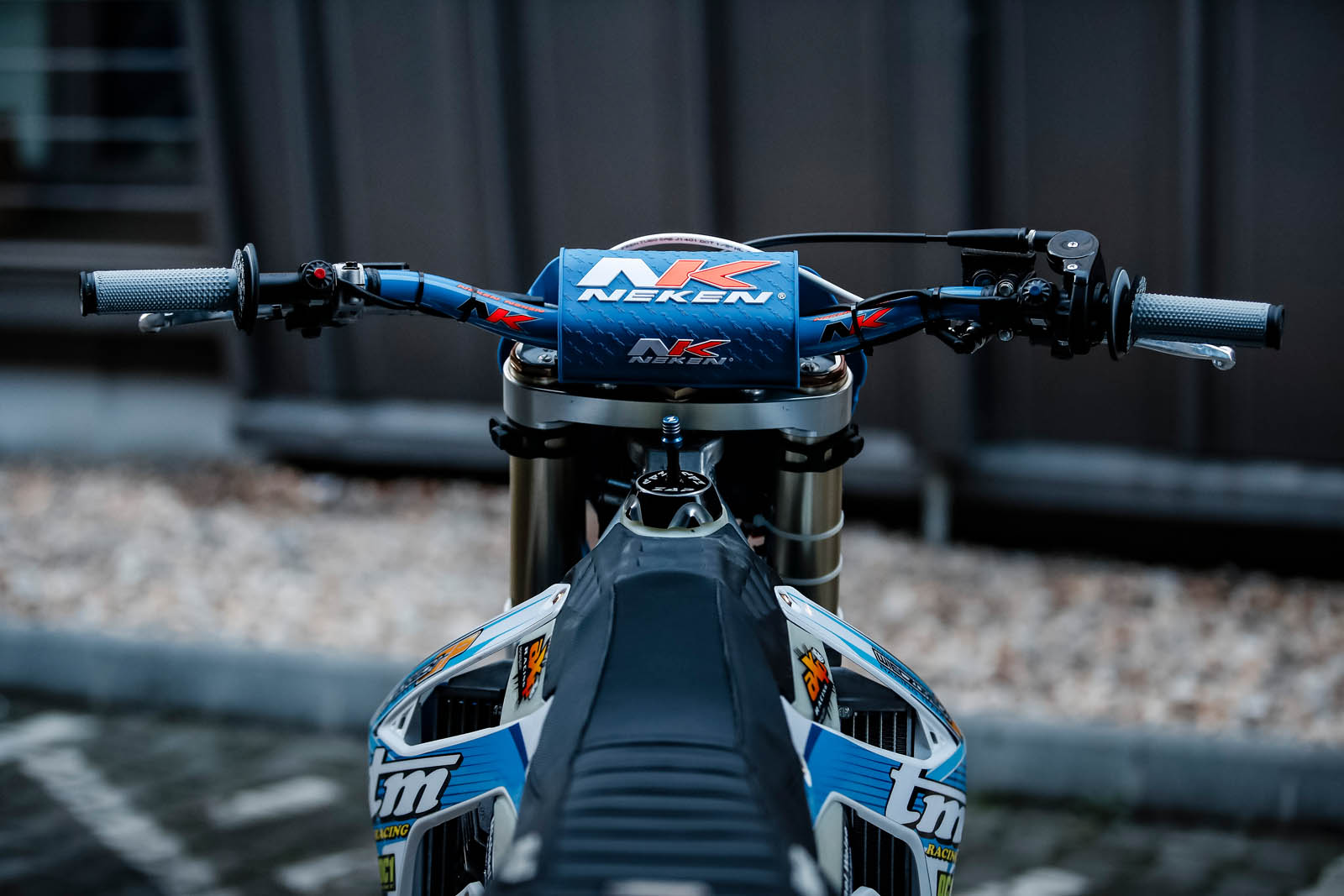 Another not un-common part are the Raptor Titanium footpegs – spot them on the Factory KTM and Husqvarna machines for example. “It’s what I use at home also and I really like them, so I figured it was the best thing to run here too.” Says Ty.

Raptor do a range of options for dropping lower and further back (5mm down and 5mm back is common) but Cullins says these are the same position as standard TM pegs.

The solid billet TM Designs rear disc protector is another part Cullins shipped over from the US and is a strong upgrade built to deflect those pesky rocks that routinely catch riders like Cullins out in the indoor races.

Up top, the handlebars are Neken and clearly flatter than the original, “something close to the 999 Renthal shape,” explains Cullins (though he couldn’t remember which bend exactly).

The front brake circuit is standard, “nothing special” the Wieczoreck GP Racing Team tell us which means the stock Brembo braking master cylinder and calipers front and rear. Some riders opt for a stronger feeling braded front brake hose but Ty isn’t a fan and the part is also heavier they say.

One difference is the lighter feeling clutch lever. The team fit a 9mm bore clutch master cylinder instead of the standard 8mm one to make pulling the clutch easier in this sport so rife with arm pump.

The wheels and spokes are stock Excel type from the standard bike. The Metzler Six Days Enduro tyres are a soft compound all round – tyre compound and mousses.

“We have changed it after the Spanish round, it’s softer now than there.” Says Schmidt. “Mainly it’s because he prefers it to be softer, in US he runs Kenda tyres, which are quite soft but they don’t have FIM approval so we try to get close to the same feel with the Metzeler.” 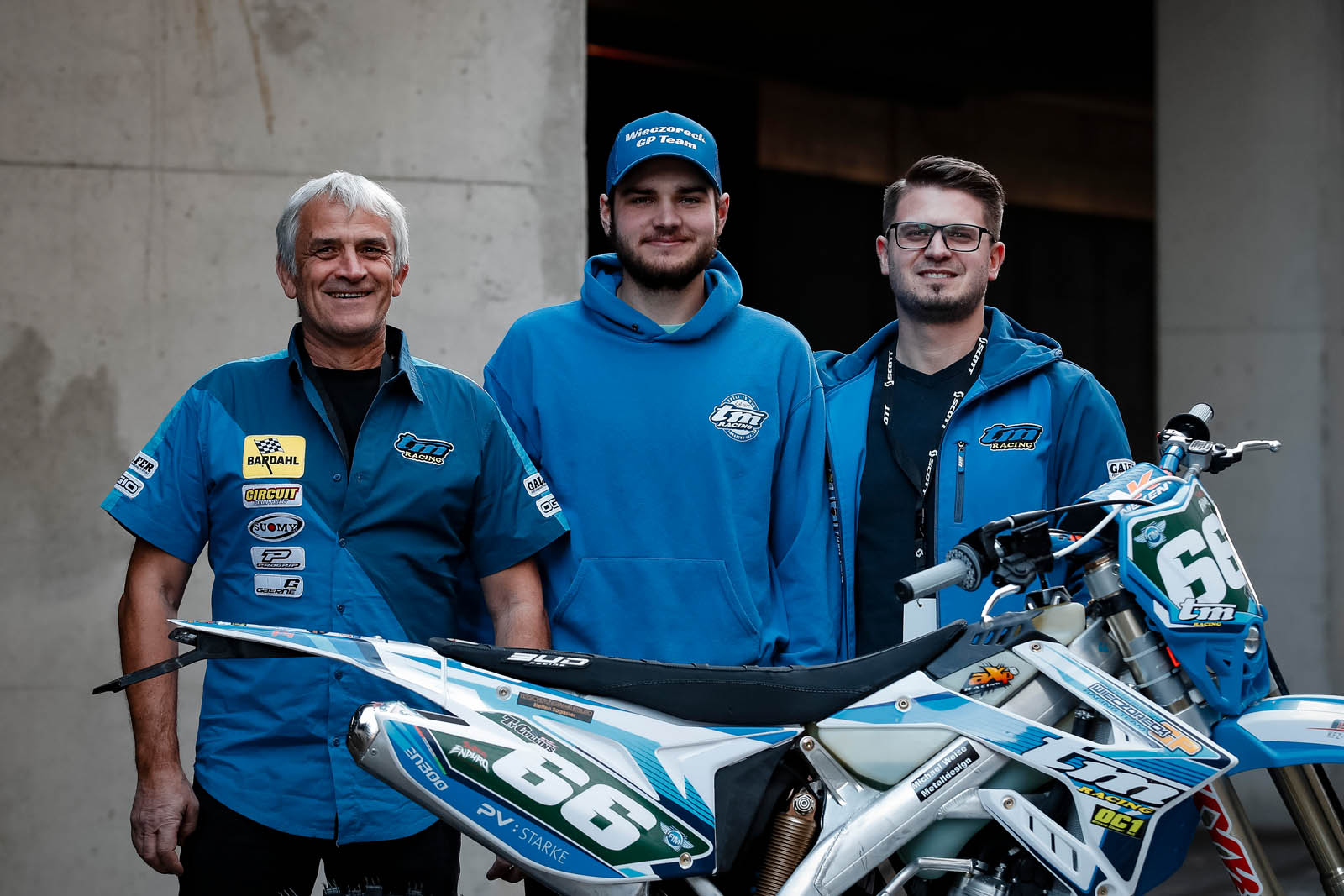 As is so often the case, the devil is in the detail with race bikes competing at the highest level. In this case, the basic bike is pretty standard and it is testimony to the standard TM Racing bike which arrives fully formed.

The detail changes to the 300 two-stroke TM are simple but effective ones based on Ty’s experience and personal set-up. It ain’t easy arriving in a different continent to race on the world stage in series with bigger stadiums, louder fans and brighter lights shining on a young rider.

But the team are used to this game and are looking after Cullins who is surely making a name for himself on the world stage. All he has to do now is follow the trend set by Haaker and Webb and take a title back across the waters to North America. As both those riders know already, that is not an easy task.