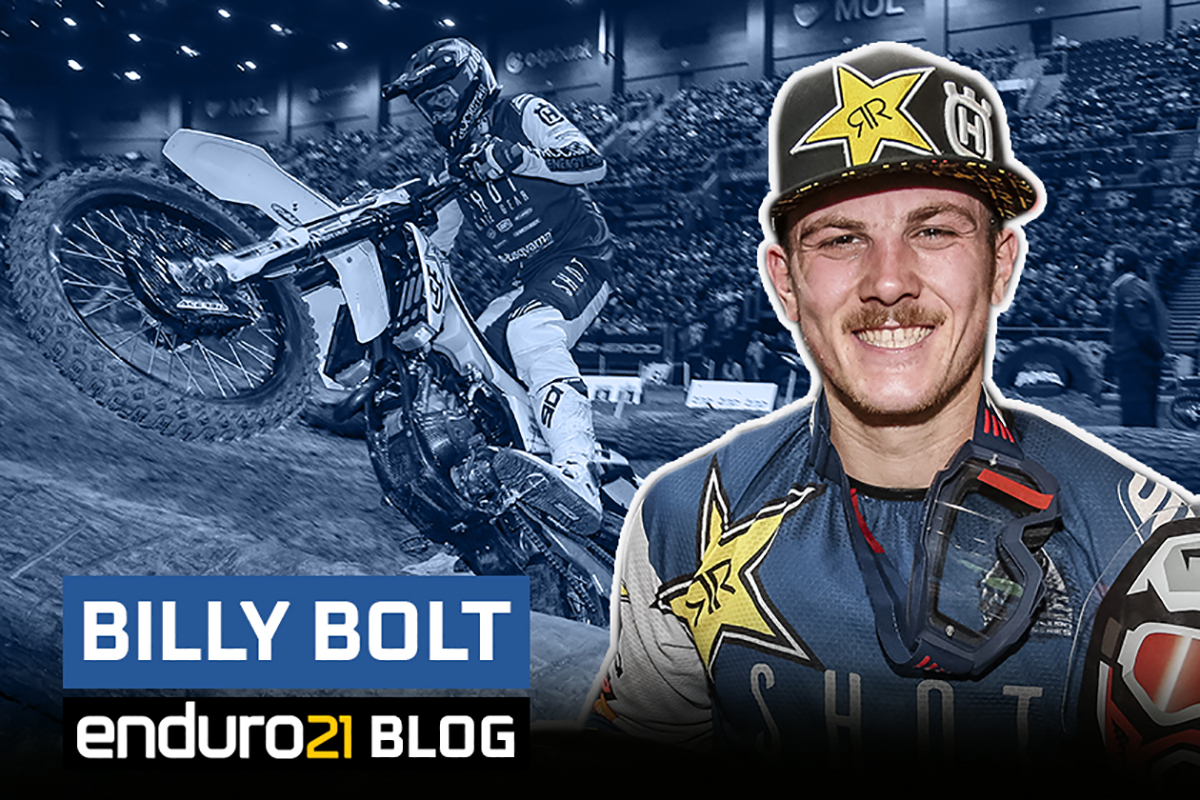 Well, where do we start? I guess with the obvious point that these are very strange times. Even just a few weeks ago I don’t think anybody would have expected us to be in this situation.

The more I think about it the more it blows my mind and I’m struggling to put the pieces of this puzzle together. The only thing we can do is do as we’re told, stay safe, stay indoors and be ready to go when we all get the green light.

Obviously normally this time of the year would very much be “go” time for the outdoor season. Just last week (as I write this in early April) we were supposed to have the Rockstar Energy Husqvarna Enduro Team media shoot.

These last few days or so have been the nicest weather ever in the UK for this time of year, normally we have to battle through bad weather to train and now we can’t ride in the weather is beautiful.

Do as you’re told

The important thing is to follow the rules and if we work together then the sooner it will all be over and we can be back riding again.

I’ve been trying to help health workers out through my social media to get people to send goggles as eye protection to those who need it. It came to my attention how bad the situation is for Personal Protective Equipment (PPE) for health service staff and people on the front line.

It’s not my idea, riders in Spain have been doing this so I don’t want to take credit for it, I’ve just been trying to do my part, locally to me.

My idea was to do what you can to find someone in your street, someone in the extended family maybe, or make connections to find people local, near to you, who might need the eye protection and help them out to show dirt bike riders are not all bad.

Aside from that I guess the biggest thing that didn’t happen during all this was the final round and conclusion to the SuperEnduro World Championship. I don’t think it has fully sunk in yet because we’re all so involved with the current situation.

It hasn’t hit me like it would have done if we’d taken it to final round and got the championship with all the fans and team.

But when I think about it I’m still immensely proud of everything we achieved, and I mean “we” – the people around me who helped me get back to be where I am. Actually, the moment I found out was so strange because Stan, my mechanic (Lee Edmondson), rang me saying he’d seen something on social media. Then it was a frantic few minutes of messaging and ringing round to find out if it was true. It was a strange one!

Missing the last round was a shame, also because I felt so good on my bike, really confident and ready for that last night. There were like 30 or 40 people coming from home ready to cheer us on and celebrate – there were flags and flares and it was really gonna go off in Poland, so it was a shame for all them.

But we try not to look at the negatives and take the positives instead and look at what we achieved. I would like to think there will be opportunities in the future in my career for those celebrations to happen.

On the day the news came it was luckily just before we had a full lockdown in the UK so a couple of friends came round, some family and also fortunately my girlfriend was here too so we had a curry and a few beers and a bit of a celebration in the back yard.

Everyone always takes the mickey out me of me for having fireworks at home but it just proved the point, always have a good stock of fireworks just in case you need to celebrate…

We had a pretty busy three-week period planned after the last round of SuperEnduro but the factory in Austria were pretty quick with communications saying they were slowing or closing things down, which obviously changed the plans.

So how am I coping with being stuck indoors? I think anybody that knows me well will understand I’m always busy and don’t like being still too often, so I’m struggling a bit to be honest. I’m not a super organised person at all but I do like to know each week what I’m working towards and to have nothing is difficult.

Injuries aside, this is the most time I’ve ever spent at home in one go. I like to be moving, riding my bike and travelling here, there and everywhere, staying at friends’ houses near where I’m riding the next day.

I’m trying to do what I can and do some of the things I don’t normally get time to do, like sorting stuff out but it’s difficult to get organised for things when you don’t really know what for.

It’s the same with training to be honest. You don’t want to be training and killing yourself every day when the next race might be three months away. If you keep going like that you’re gonna be sick of your life pretty soon – you can’t do that every day for three months.

Social media challenges…hmm. I think I’ve made myself clear on that issue on social media. Some of them are good but I don’t really see the point of getting all your kit on to go and stand on your bike in your garden. It’s a free world and it is completely up to everyone what they do but I don’t find it that entertaining, I think it’s stupid. It keeps us all entertained I guess but I don’t know.

Everyone has become a personal trainer now as well but I like to leave that to the experts. I haven’t got the garden to do all that myself but, like I say, it is a free world and I don’t mind making a sarcastic Instagram post myself, or even about myself, but I’m not one for all this stuff.

They’re not all bad. Jonny’s (Walker) one was a good one, three and a half hours on a rowing machine was impressive. But when you’ve got someone like Toni Bou doing what he’s doing and riding round his house, everyone else might as well just park their bike up.

This time could be frustrating but is it also chance to take stock and I have found a few memories and some stuff has popped up like my very first ride back on a bike after injury which does bring it home how far I’ve come to this point just a year later.

I think to look back at last year and see that I was competitive at the races I entered even if I was still recovering and learning to use my leg again so that has been good to take encouragement from.

What’s next? The thing is no-one really knows what’s going to come first or what order the races will restart with, nationally or internationally.

Organisers have to make money though so as soon as there’s a green light they’re gonna press go. I’m guessing that we’re not going to have a lot of preparation time but equally I’m guessing we’re all gonna be in the same boat.

Depending on how much of a WESS Championship we get, I want to get stuck back into that of course. Compared to where I was last year, I am in a 100% better place so I believe I can be competitive at every race and be at the top to then challenge to get that title back.

That said, and looking at how the year is going, I would say my goal is to be healthy at the end of the year and be ready to defend my SuperEnduro title. I think I have said before how much I enjoy the sport and where I feel I can push and be at my strongest as a rider.

It is crazy to think that the first round of the 2021 SuperEnduro World Championship could be the next competitive race, but the way things are going it could be a possibility.

Like I said earlier, no-one really knows what’s coming next but as long as we stay safe and follow the rules all we can do is bide our time and be ready to get back on it.

Till the next time, stay safe.