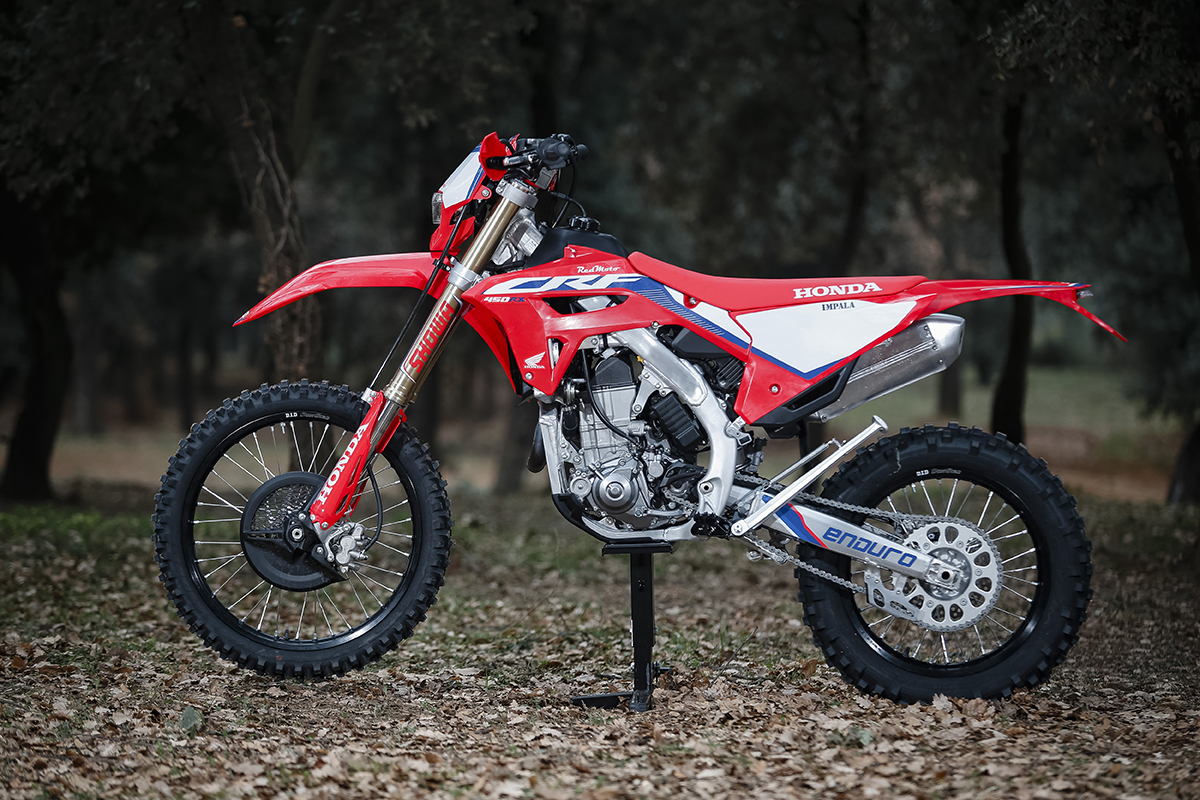 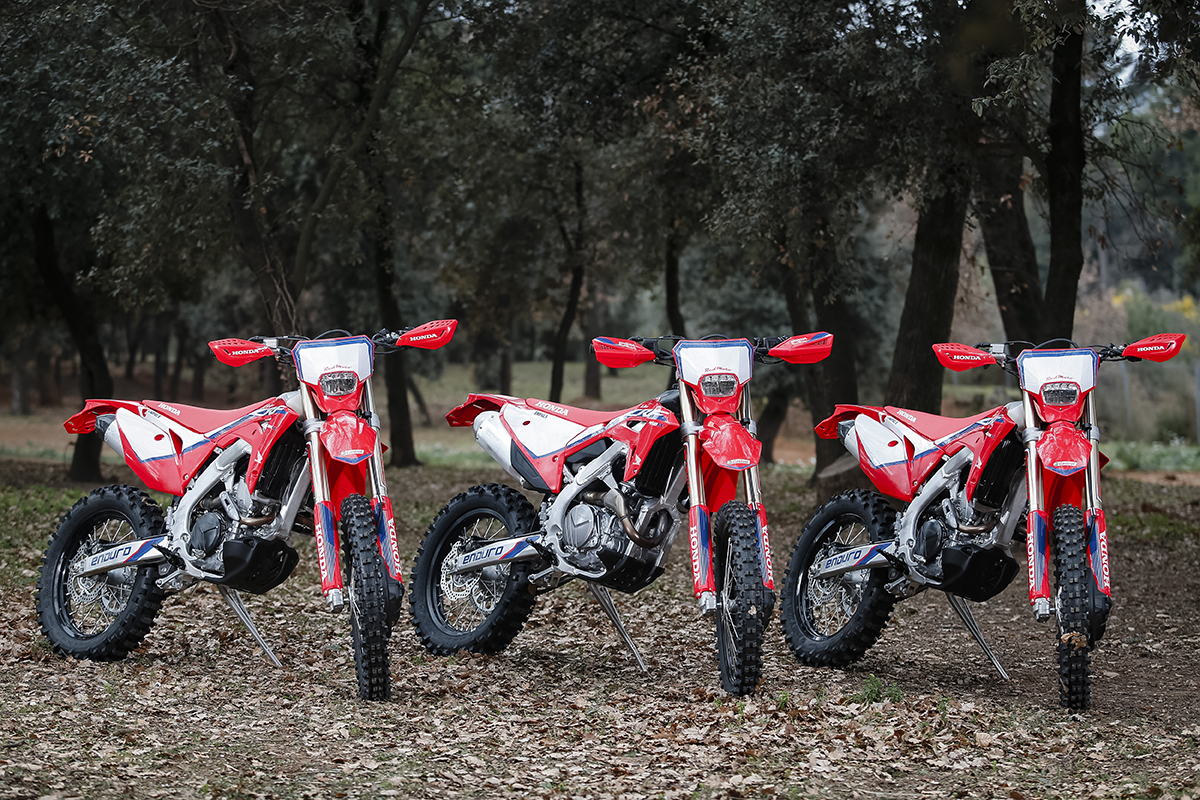 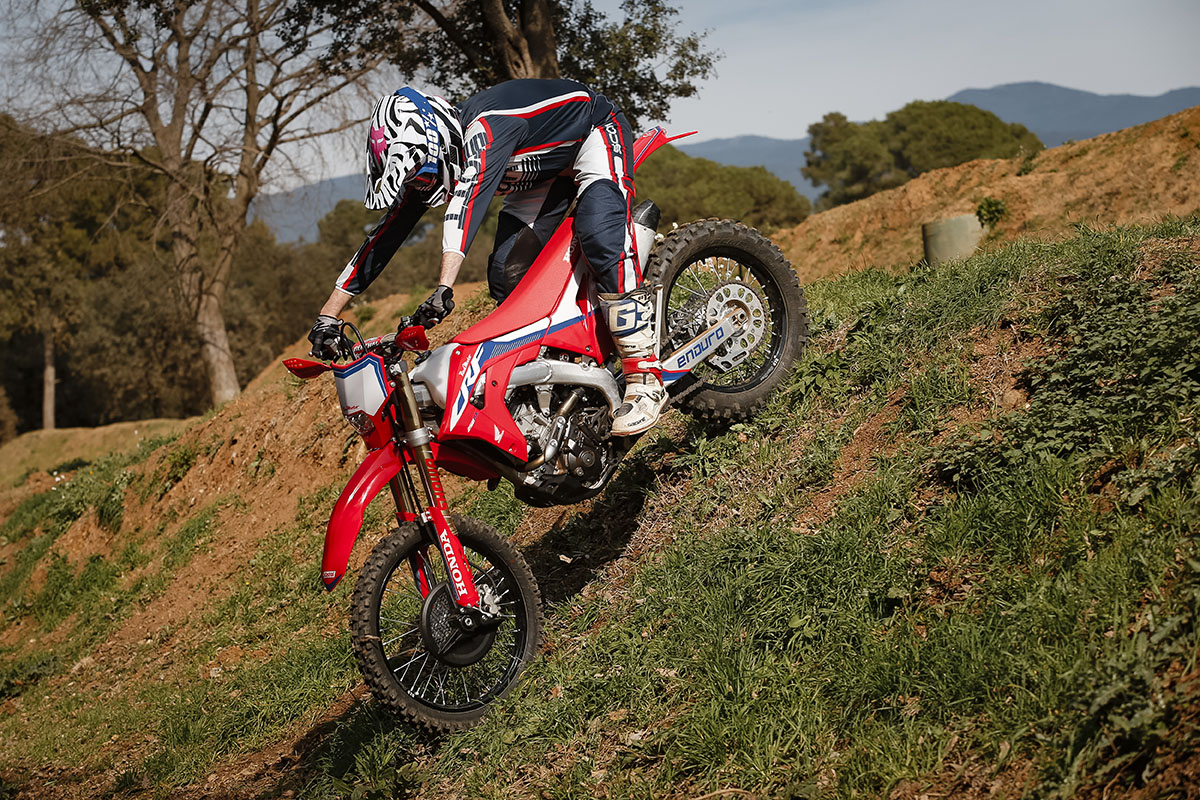 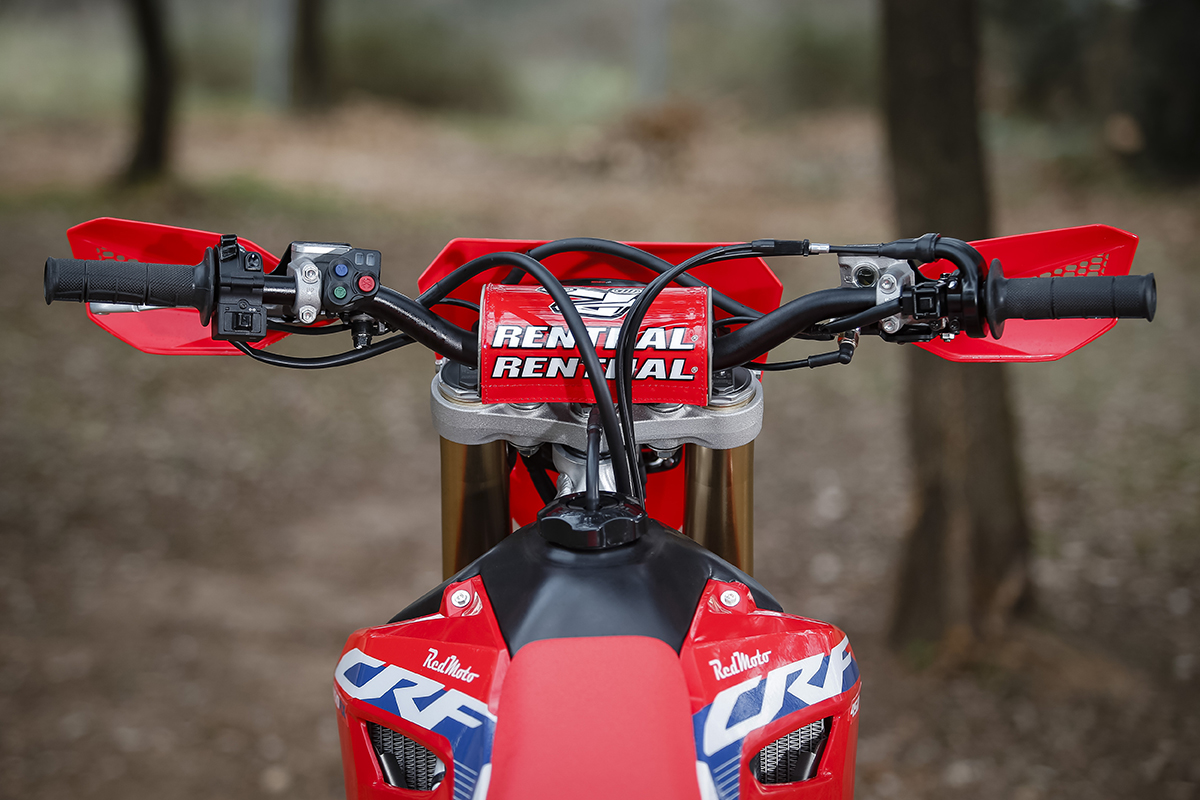 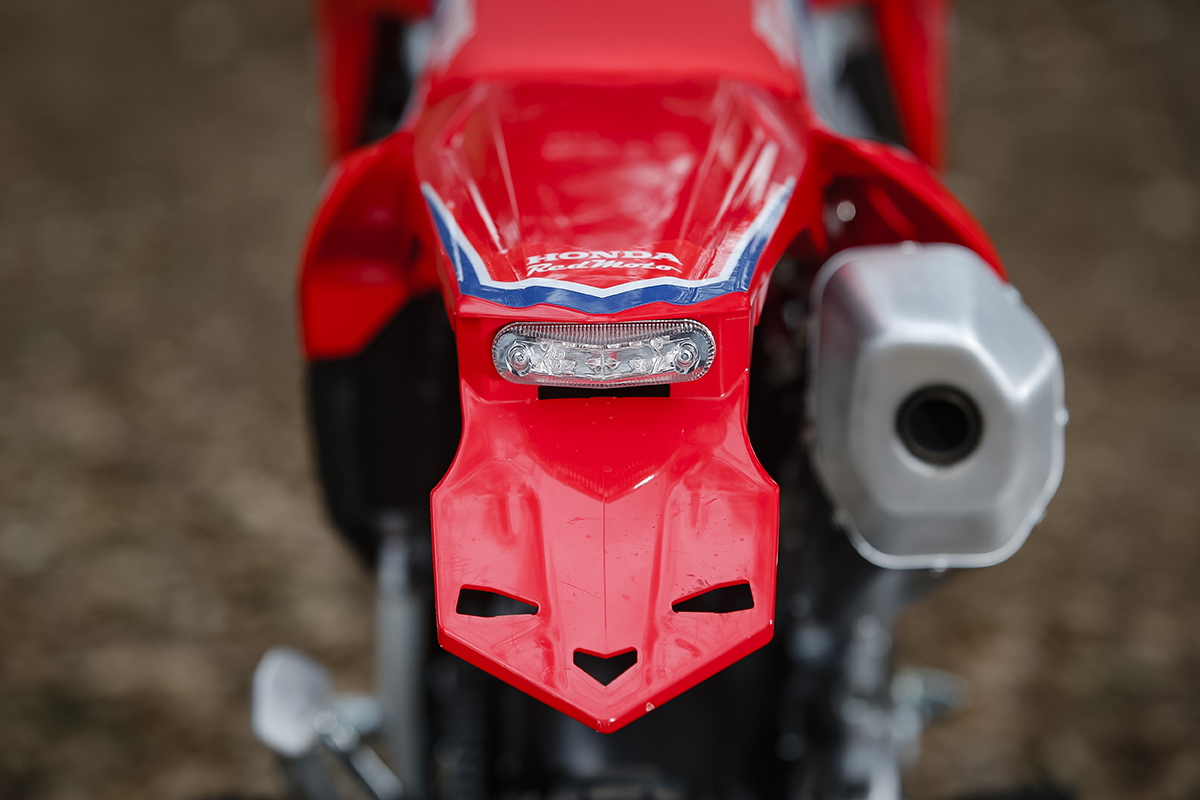 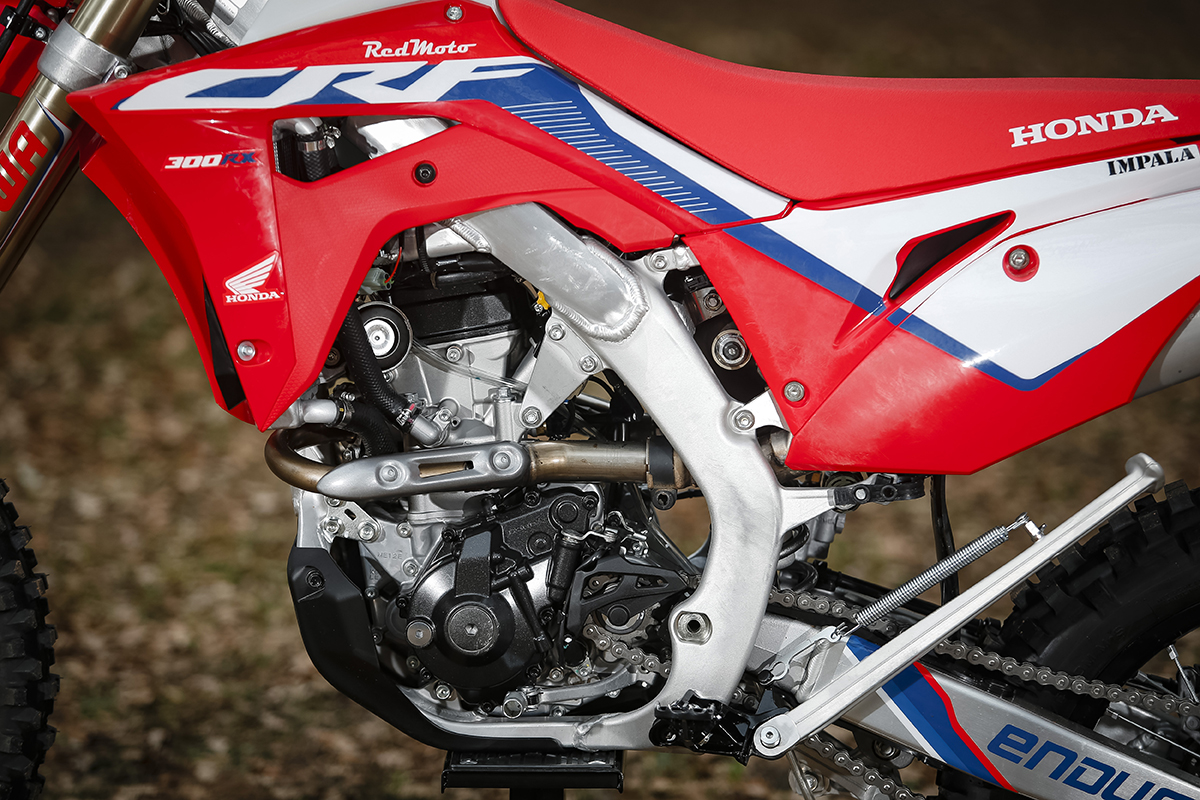 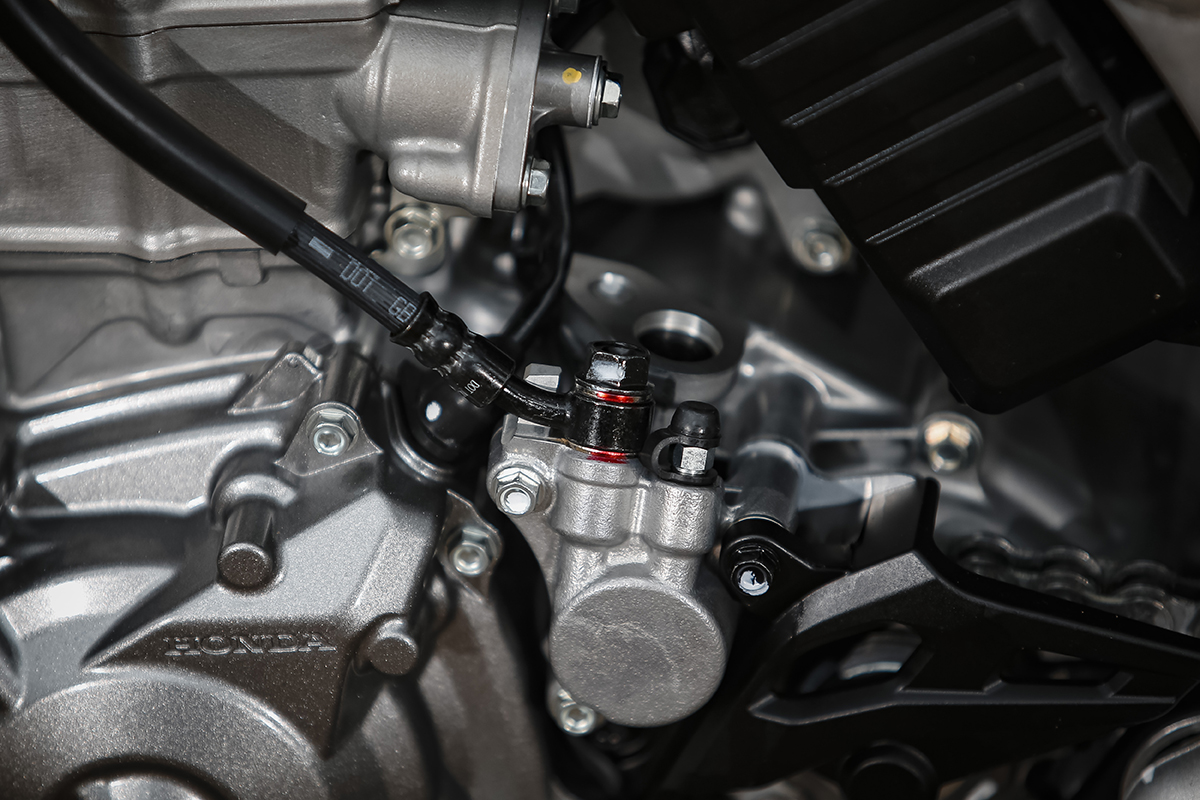 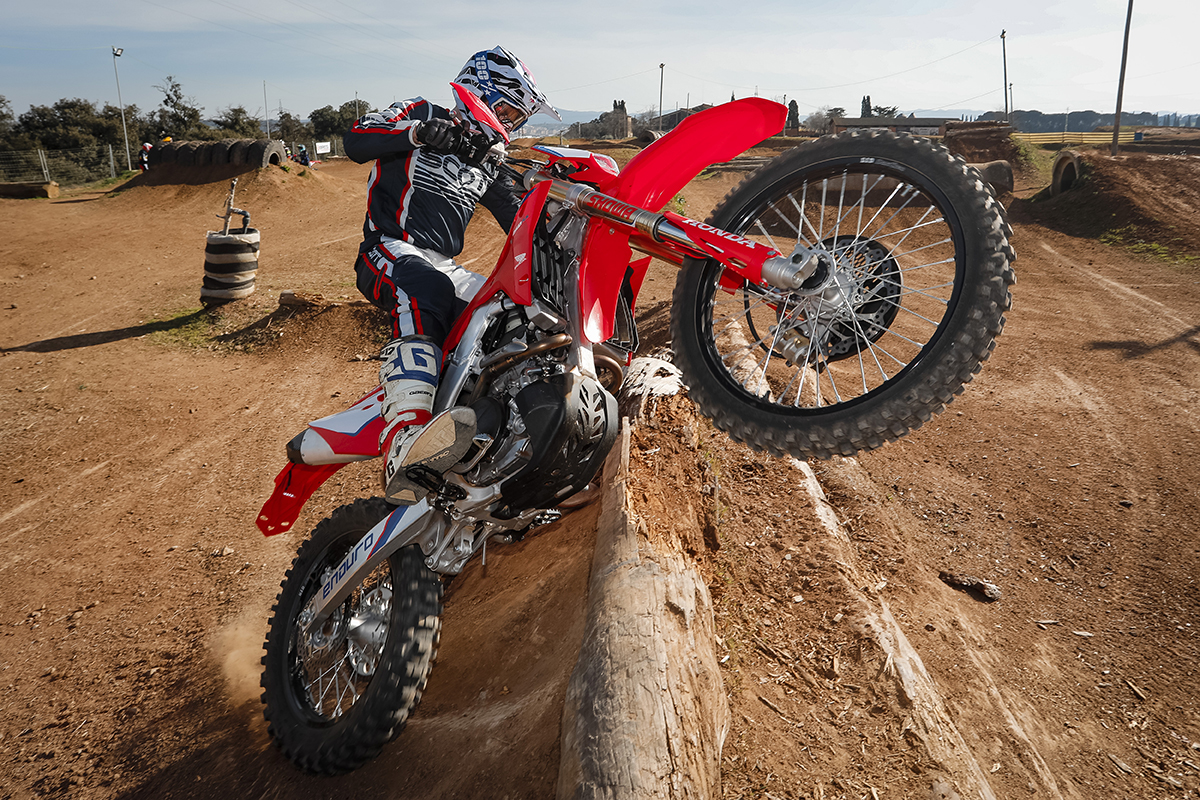 The all-new Honda CRF450RX sits on top of RedMoto Honda’s four-strong homologated enduro line-up – Enduro21 checked in with Impala Honda, the Spanish importer, to test the latest big red machine and find the details matter about the 2021 range…

RedMoto is the official wing under which the Honda enduro range, in homologated form, is produced in Europe. Basically put, the two standard Honda CRF250RX and CRF450RX models go in one end of the RedMoto factory as closed-course bikes and come out the other as fit for purpose, ready to go enduro machines kitted out with tried and tested parts developed in-house with their race teams on the world stage.

The bonus, the big bonus, is that RedMoto have two extra models which use the standard CRFs as a base but with different capacity engine options; a CRF300RX and CRF400RX to complete a four-model enduro range – although sadly the CRF400RX wasn’t available to test as Honda Impala don’t import it into Spain.

Honda Impala are the Spanish partners of the RedMoto range and hosted a day’s testing at the Ametlla Park, north of Barcelona in Spain. It gave Enduro21 chance to try the bikes for size and find out more about the 2021 CRF RX range…

The first thing that might come to your head when you think about a 450 four-strokes is that it’s going to stretch your arms, and this all-new Honda CRF will do that, but it’s surprising -you can also ride it really smoothly.

If you want to go fast you won't out-run this engine but for riding through single tracks and technical stuff the torque makes life easy. The low-down power delivery allows you to run a higher gear and with a finger on the hydraulic clutch everything is much easier than you expect.

The Ametlla Moto Park is a mixed venue, famous as a test track for some of the best riders like Jonny Walker, Billy Bolt and Taddy Blazusiak, it has a bit of everything from a SuperEnduro course, an MX track and some loops around a woods section.

Between trees, the “easy-to-ride” characteristics of this big 450 stood out even more. Put it a gear higher, be gentle with the gas and the riding is way more relaxed than with its little sisters, the 300 and the 250. 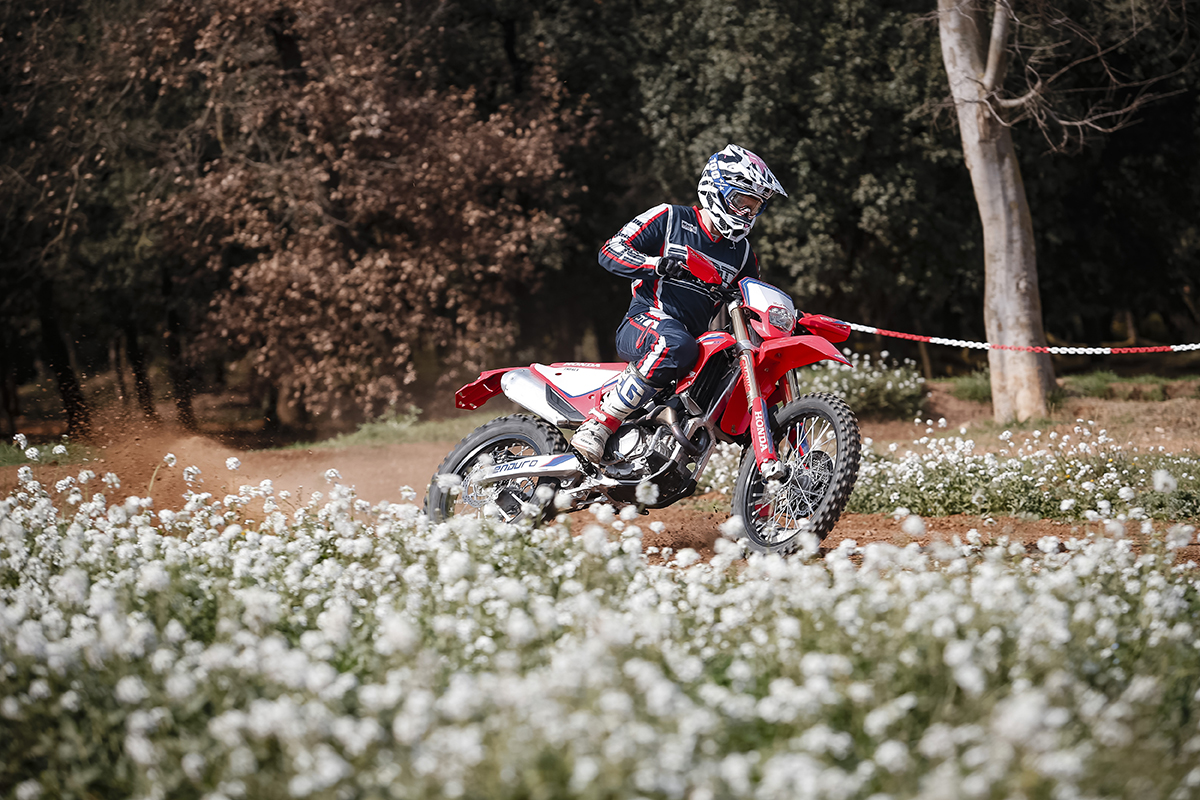 The biggest bike from the CRF RX range has a revised decompressor system for 2021 which improves the stall resistance, and alongside the larger airbox (the battery is now located outside) and the reworked throttle body and exhaust ports, it all helps that smoothness.

It seems slightly unbelievable to say it but the 450 practically rides itself in the rock garden at the SuperEnduro track. In first gear, with a little gas and one finger on the clutch the 450 guides itself through as you simply stand firm on the footpegs – as the arm pump builds in this type of riding that easy nature can be a bonus!

All the bikes in the RedMoto Honda enduro range arrive with Honda’s Engine Mode Select Button (EMSB), located next to the clutch lever. You just need to push the button for three seconds, with the bike at idle to change between the three power modes: the first one is standard, the second one is soft and limits the power output and the third, “racing” switches power higher up the rev-range for full gas riding. 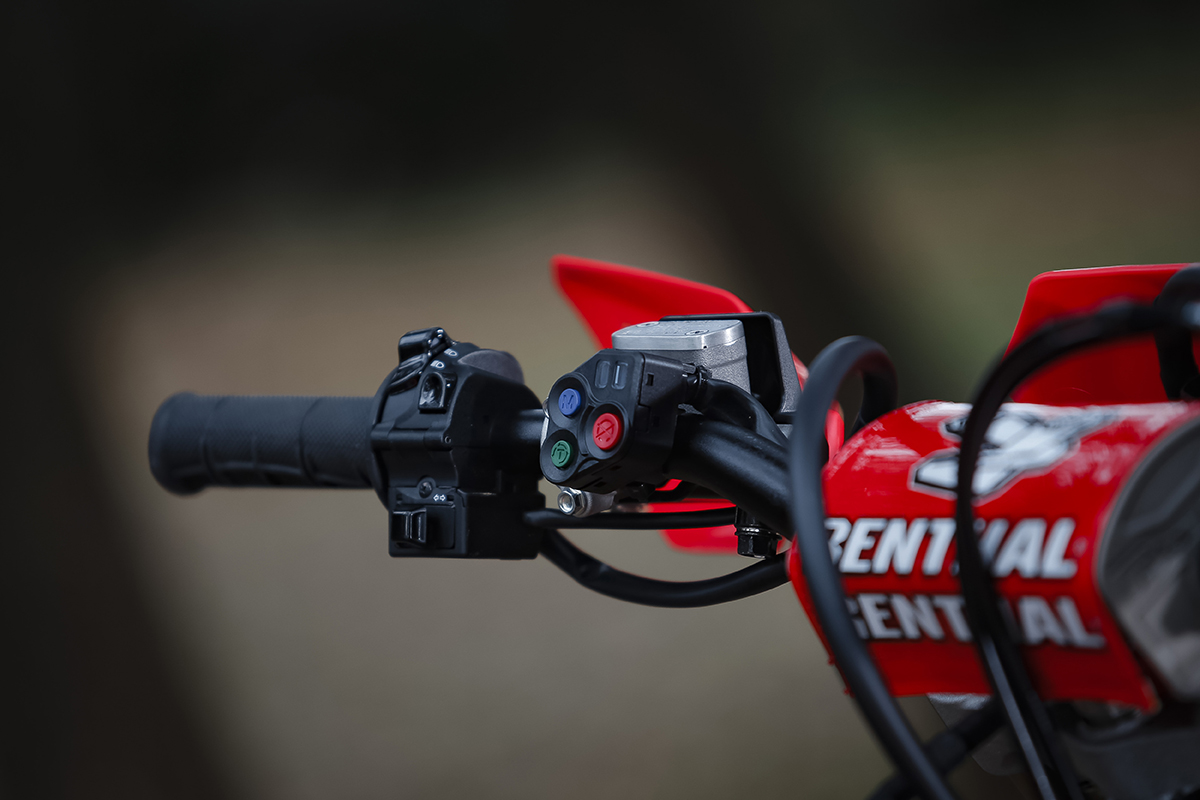 In the real world switching between the three maps on the different bike models changes the feel of power output quite noticeably. You can stick in standard mode, setting one, for most of the time quite happily but the second map worked really well for riding in low traction conditions and takes the edge off when those rocks and logs got heavy going. Racing mode meanwhile is the one to go all-out in a special test to snatch those extra seconds.

The CRF 450 RX also features Honda’s Selectable Torque Control (HSTC) – traction control – which has three modes that change the bike response further. With the second mode on and the traction control also on the second level the bike pulls like a tractor, again making the 450 easier to ride than you would expect.

Don’t get us wrong, the standard map makes the bikes easy to ride but when you ride on slippery terrain it can catch you off guard if you twist the throttle a too much. The third map is for the brave ones, hold on tight because it will stretch your arms on the 450!

RedMoto hasn’t just focused on getting the Honda CRF RX bikes homologated to pass the Euro5 rule, they have also equipped them with all the necessary goods to ride enduro. All four models come with a skidplate, handguards and front disc guard as standard. The 450 also features a fan as standard which is less common nowadays. 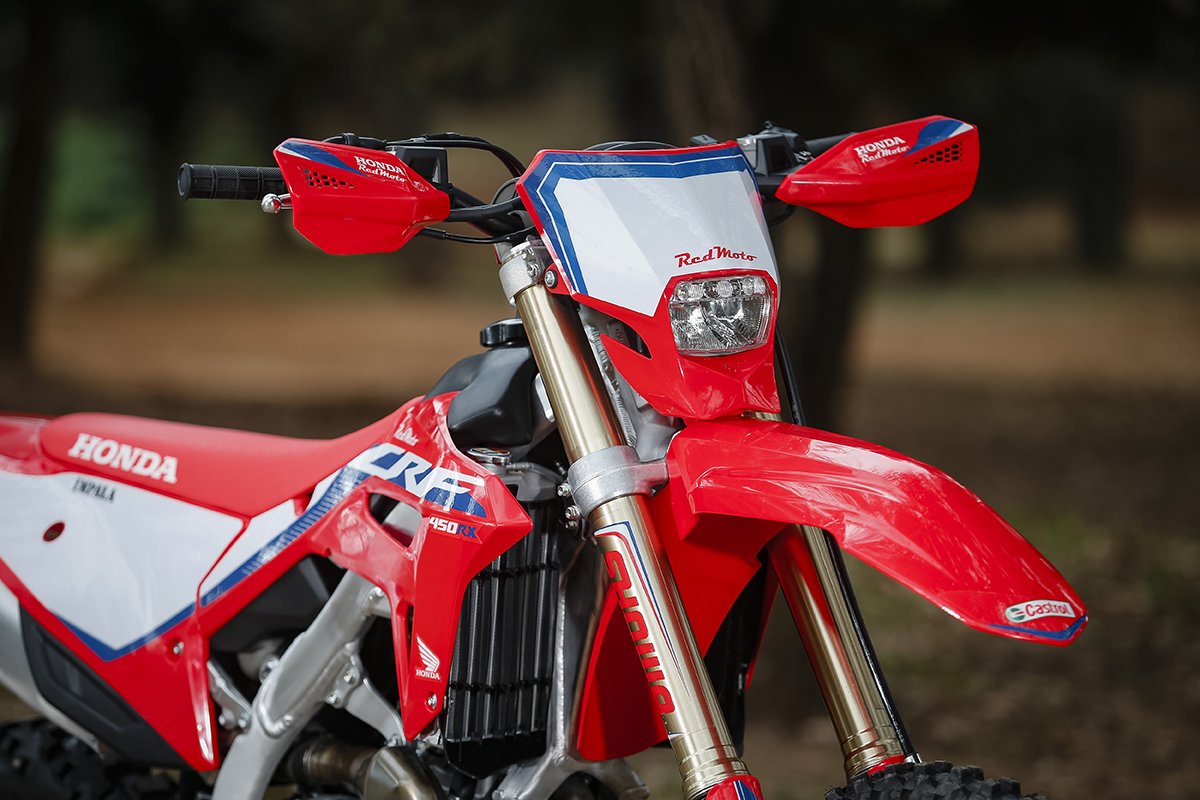 For 2021 the standard front and rear lighting is also ‘full LED’ which, apart from giving you better vision in the dark compared with traditional lights, also means blown bulbs while riding the rough stuff is less likely.

If you fancy an even better equipped version of either of these four models, you can always go for RedMoto’s ‘Special’ version which includes a bunch of extra goodies.

The ergonomics on the latest generation CRFs feel flawless – it’s something the factory racers, including Ken Roczen, Tim Gasjer and the RedMoto Racing team riders, have been working on for several years and singing the praises of since the newest CRF450R was launched.

The absence of rough edges and the ‘neat’ design from front to back allows you to move on the bike with no restrictions. The new shape gives it a slimmer feeling and that makes gripping the bike with your legs an easier task, building up your riding confidence in the process.

The CRF 300 RX, the bike for everything

The CRF300RX is the most ‘exclusive’ bike from the RedMoto range, the top-end is specially built by Athena and can't be bought separately. Alongside the easy as pie 250, the extra CCs in the 300 make an appreciable difference. You can ride the bike hard like a 250 but with a little extra torque it feels like a bigger capacity bike.

This makes the 300 a really easy bike to ride because you don’t need to work so hard with the gears as you would do with its litter sister. By the same measure you don’t have to be as cautious with the throttle and you would be with the 450 and you suffer less fatigue. 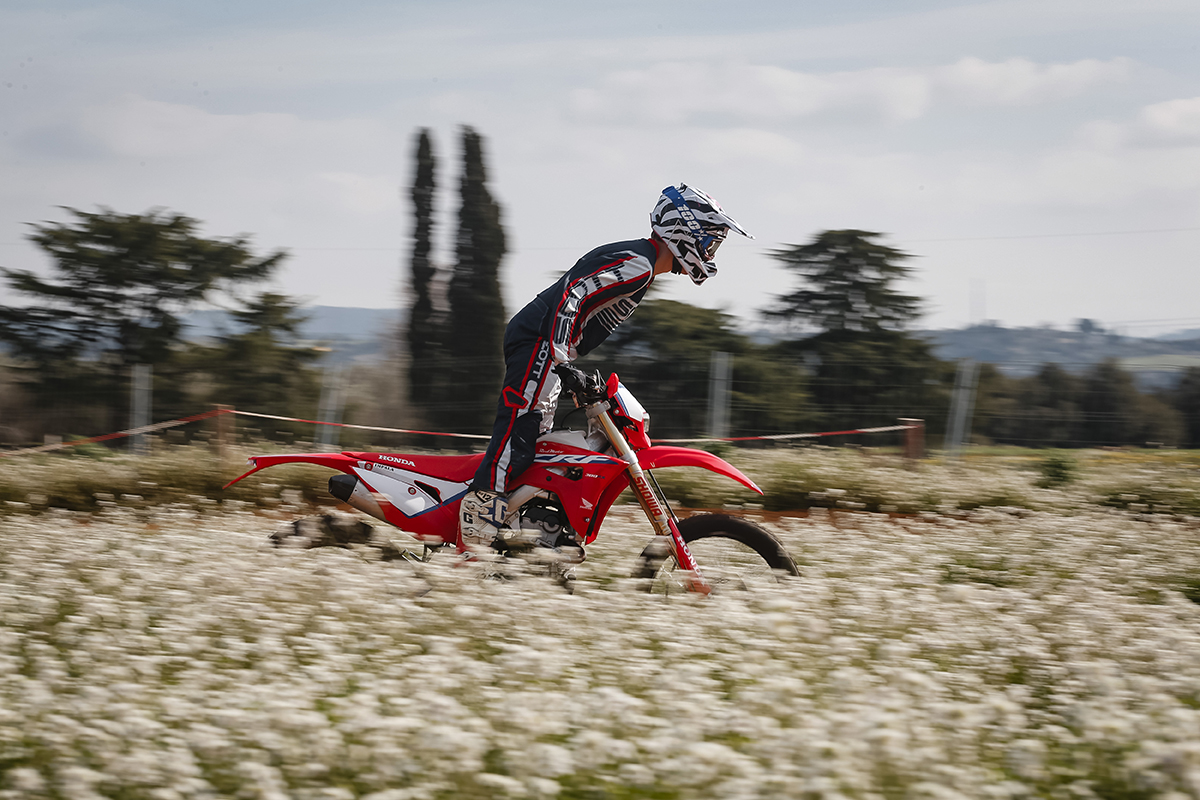 The extra torque helps up hills and its power makes pushing hard between tapes an easier task. The closer gear ratio between second and third was helping to deliver this feeling too, together with the improved clutch performance which has a soft pull despite being cable operated – the CRF 250 RX also benefits from these upgrades in 2021.

After riding them all it made the middle bike from the RX range feel like the best choice for the average rider – although like we said it was a shame not to have the 400 model here for comparison.

The model cycle from Honda is all focused on the 450 this year which means the now two-year-old 250 (and 300 here) lack the newer chassis and also the hydraulic clutch from the 450. If it gets those two updates for 2022 it’ll be the real ‘every rider’ woods weapon.