Aprilia has released the first concrete details of the new Tuareg 660 Adventure bike, their first in a generation and a rebooted classic from their history books which jumps them back into the Adventure market.

The original Tuareg from the Noale-based Italian manufacture was around in the 1990s and in a time when big trail bikes were going out of fashion and big Adventure bikes like BMW’s GS were taking over the charts.

For many it was a shame, those big bikes were comfy and easy to ride over distances but lacked the easier nature of a smaller capacity bikes, on or off road. The table shave turned a bit at least in recent years with the emergence of a new middleweight Adv category which is proving immensely popular.

Aprilia has woken up the trend and deployed a proven 660 engine in a new chassis with an old name synonymous with adventure bike travel. 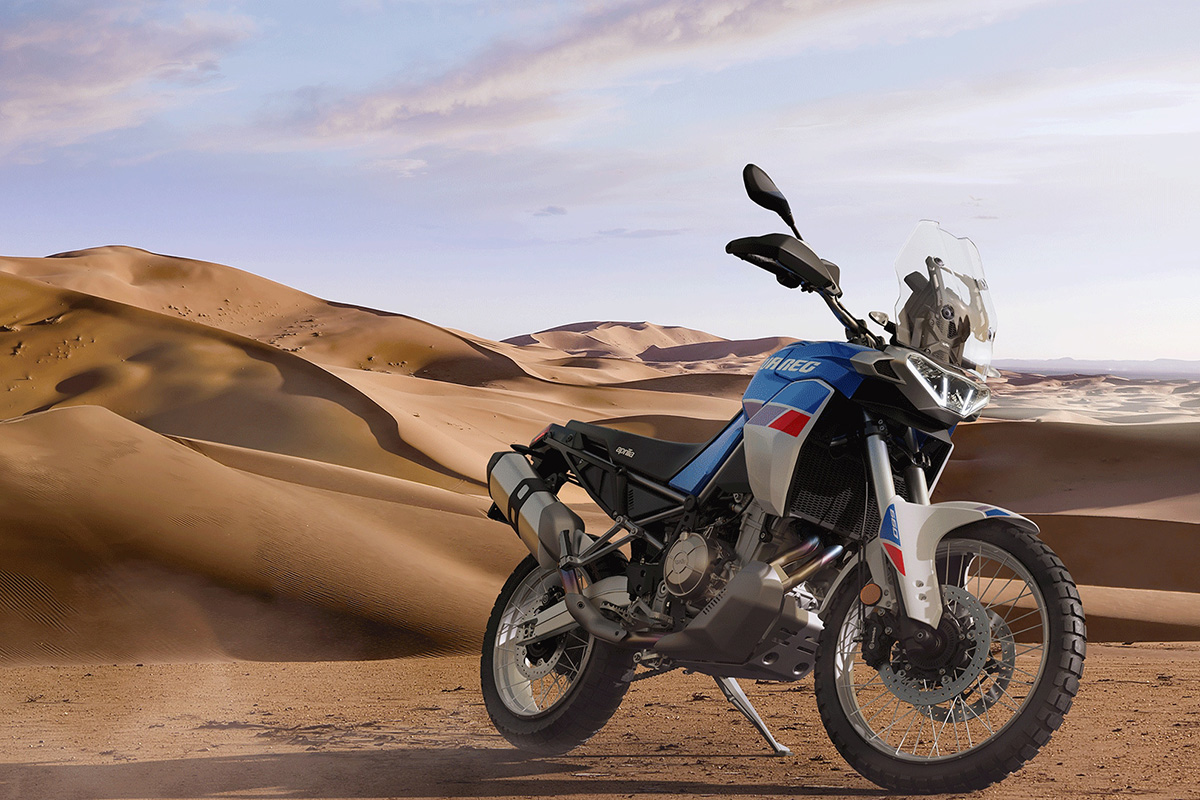 At the heart of the new gen Tuareg is their 660cc parallel-twin engine which is a proven platform on other Aprilia models. They claim 80HP max power and peak torque of 70Nm with a “significantly boosted low/mid-range curve” in the Tuareg.

A 660 parallel twin is the right kind of engine for an adventure bike eager for some off-road action and has fast become the new norm in Adventure bike world. Middleweight bikes like the Yamaha Tenere 700 and KTM 890 are lighter and nicer to ride than their bigger and older brothers. Importantly they have power characteristic better suited to the idea of travelling and trail riding in equal measure.

The design of the Aprilia engine is pretty compact by comparison to some bikes on the Adv market – a higher sump which reduces the vertical footprint they say – and that give a decent 240mm of ground clearance.

The chassis is all new, although it does lend a retro-look the new Tuareg along with that chunky, square seat. Aprilia say it is their own design steel tube main frame with an aluminium swingarm. As for suspension, they have fitted 43mm USD front forks with a progressive linkage rear shock absorber and both have a healthy 240mm of travel.

On the electronics side the new Tuareg has four riding modes, two of which are customisable to your preference with one dedicated to off-road riding.

ABS can be deactivated for both wheels or only the rear too which is a good feature depending on your off-road riding experience. Aprilia’s “APRC” electronic system offers traction control, cruise control, engine map and engine braking control. All are accessible via the high-visibility 5" TFT screen and handlebar switches.

Aprilia have not released full specification yet not any further images. The new Tuareg 660 is expected to go on sale later in 2021.