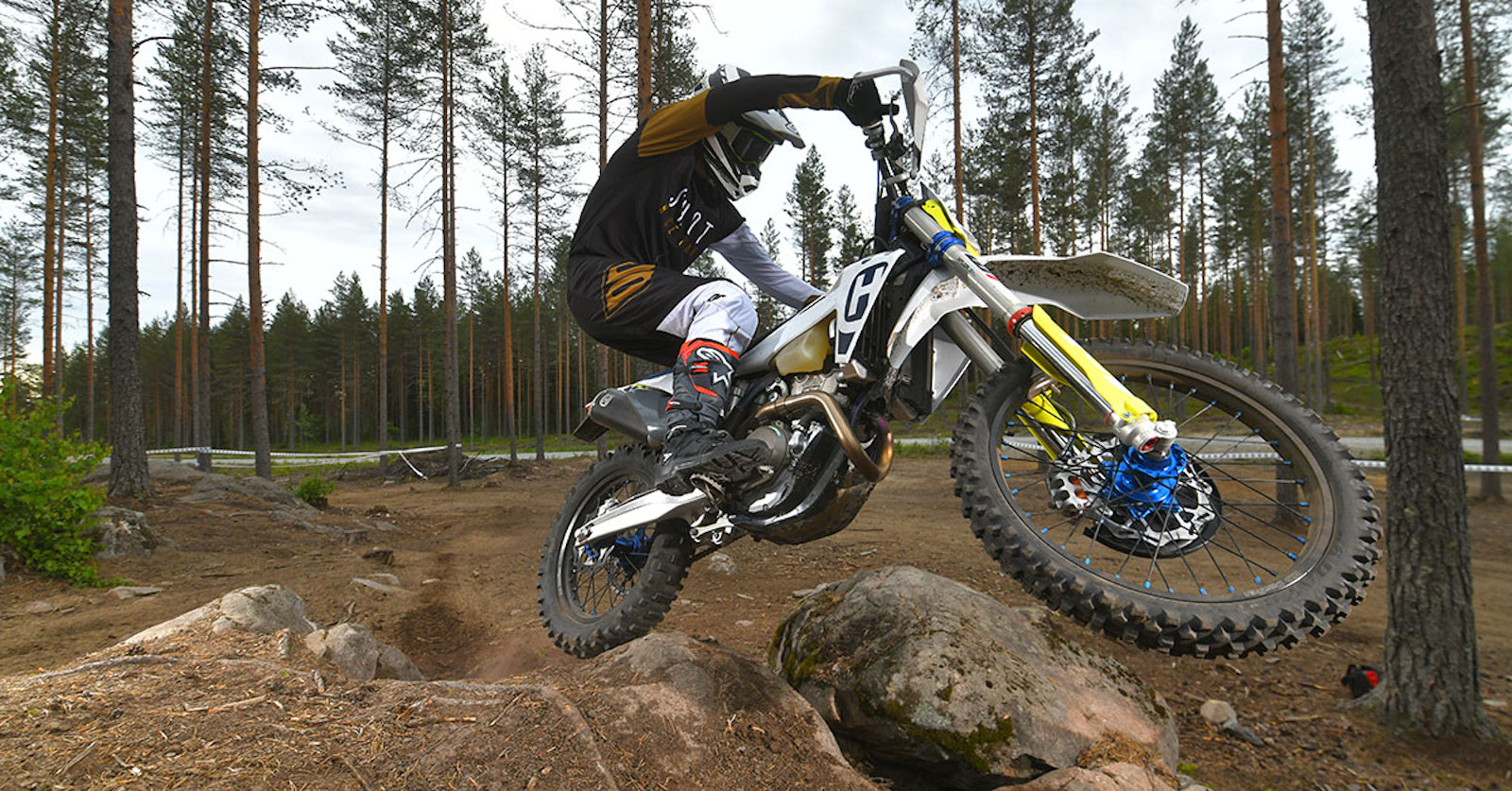 Husqvarna Motorcycle launched their 2020 Enduro models at the world press test in Finland last week. We’ve locked down the key reasons why the new TE and FE Enduro line-up have changed their game.

For model year 2020, Husqvarna have released the new TE and FE Enduro models with a familiar list of changes to boost performance, improve handling and make them more rideable. It is a summary of changes we hear at most model launches from every manufacturer, every year, but sometimes those changes are meaningful and the new bikes take a healthy development step forward.

Arriving on the back of strong changes to the motocross range in 2018 (2019 model year), the new enduro TE 150i, 250i and 300i two-strokes and FE 250, 350, 450 and 501 four strokes have taken onboard new main frames, subframes, WP suspension and linkage, engines updates, new exhausts and significant updates to the ECU and engine mapping software. 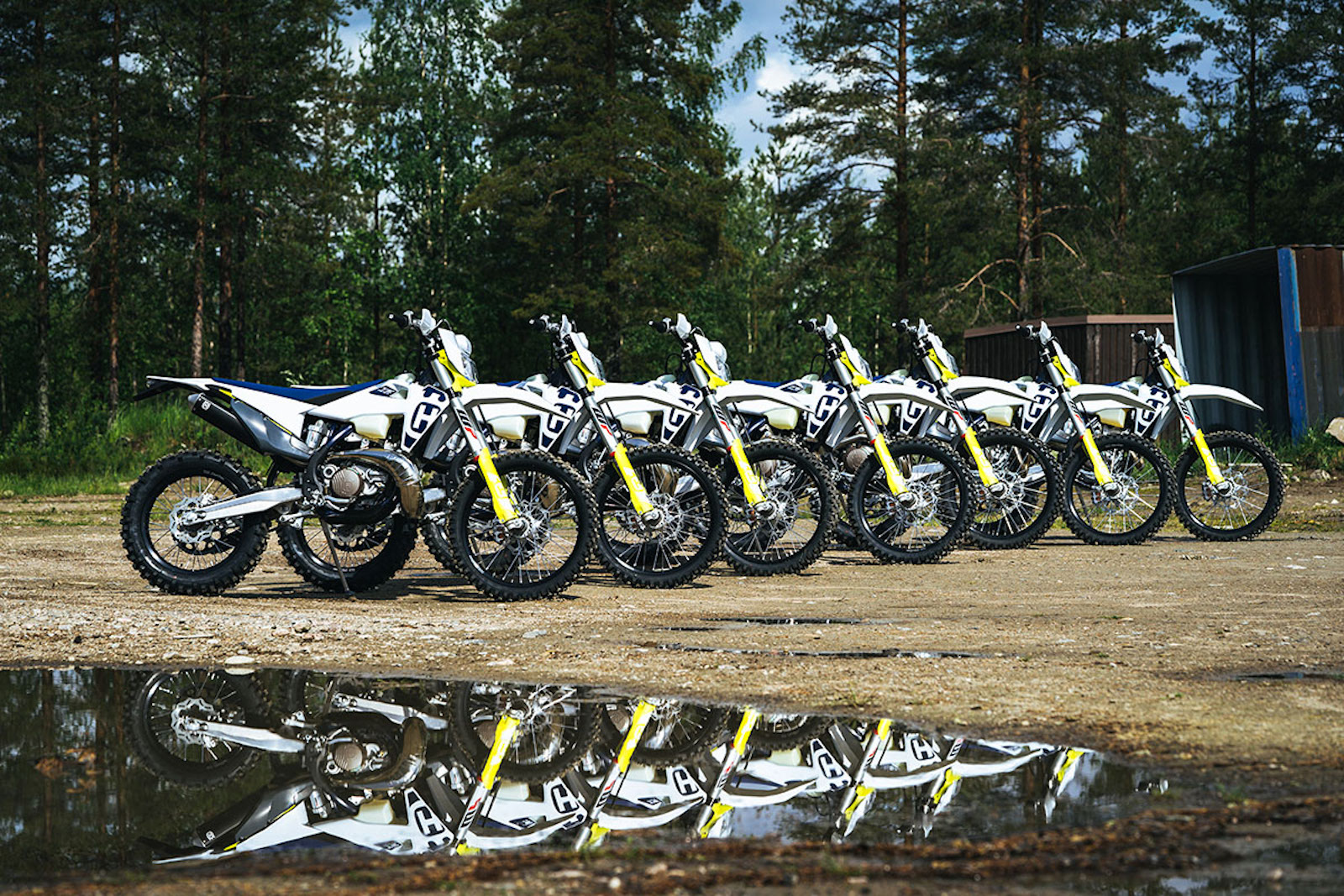 The test track at Jamsa in Finland gave perfect chance to test the substance behind that list of changes – changes which add up to 60 per cent new parts on the bikes. It was a test track which mixed single track, piles of rocky outcrops perfect for extreme riding, sandy special tests and whooped-out woods riding typical of Scandinavia.

What’s the verdict? We’ve boiled it down to the key areas the new generation of Husqvarna Enduro bikes are making it count… 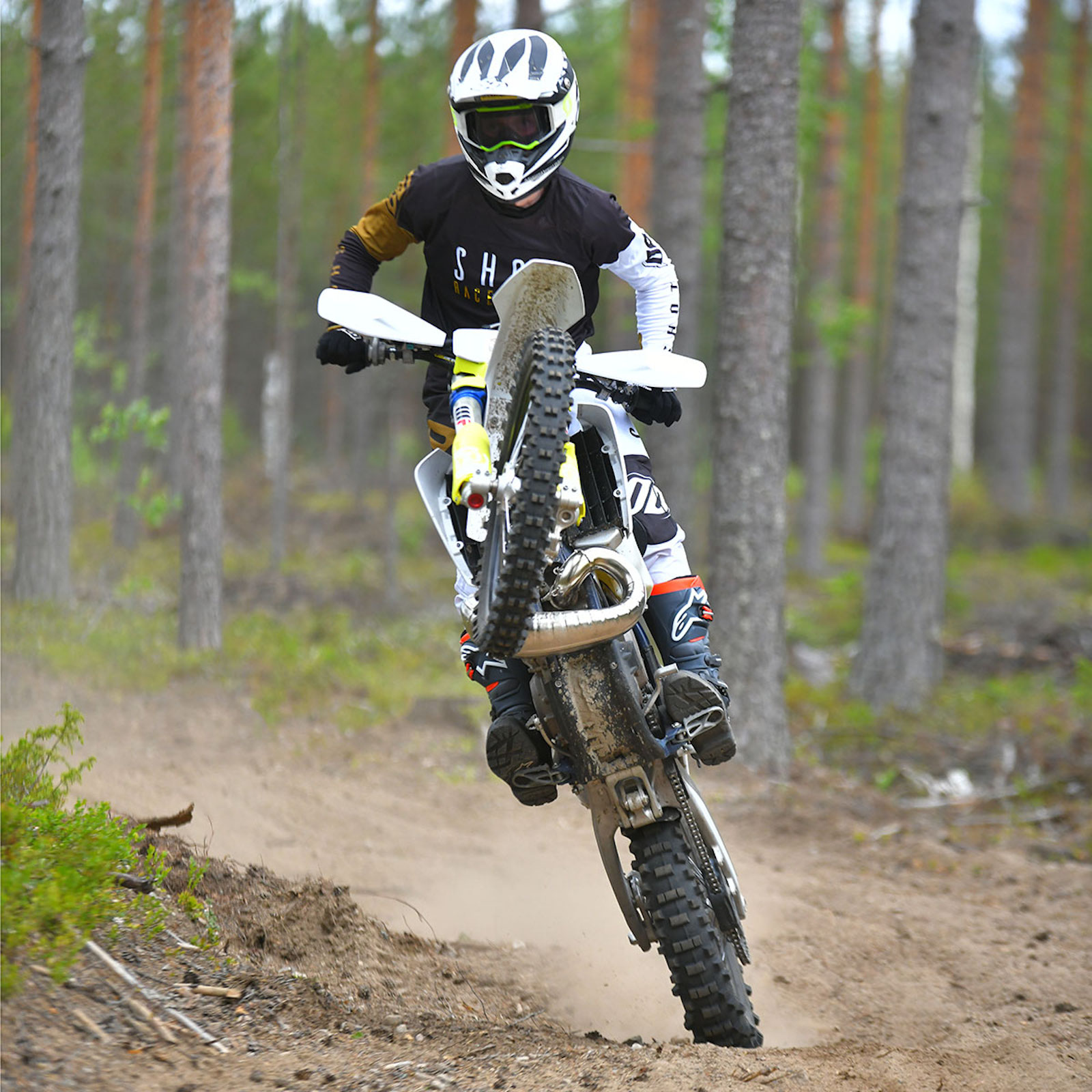 If you’re going to start a test report somewhere then where better than the first thing you notice when you get on the bikes? Though Husqvarna's seven-strong range are quite different bikes, all show the changes Husqvarna have made for 2019. But the first thing that hits you is how damn accurate the throttle response is.

The two-stroke 250 and 300i models are still relatively new and development continues at a rapid rate – particularly in the software department which Husqvarna says has seen many thousands of hours development time since the first fuel injected models were released. 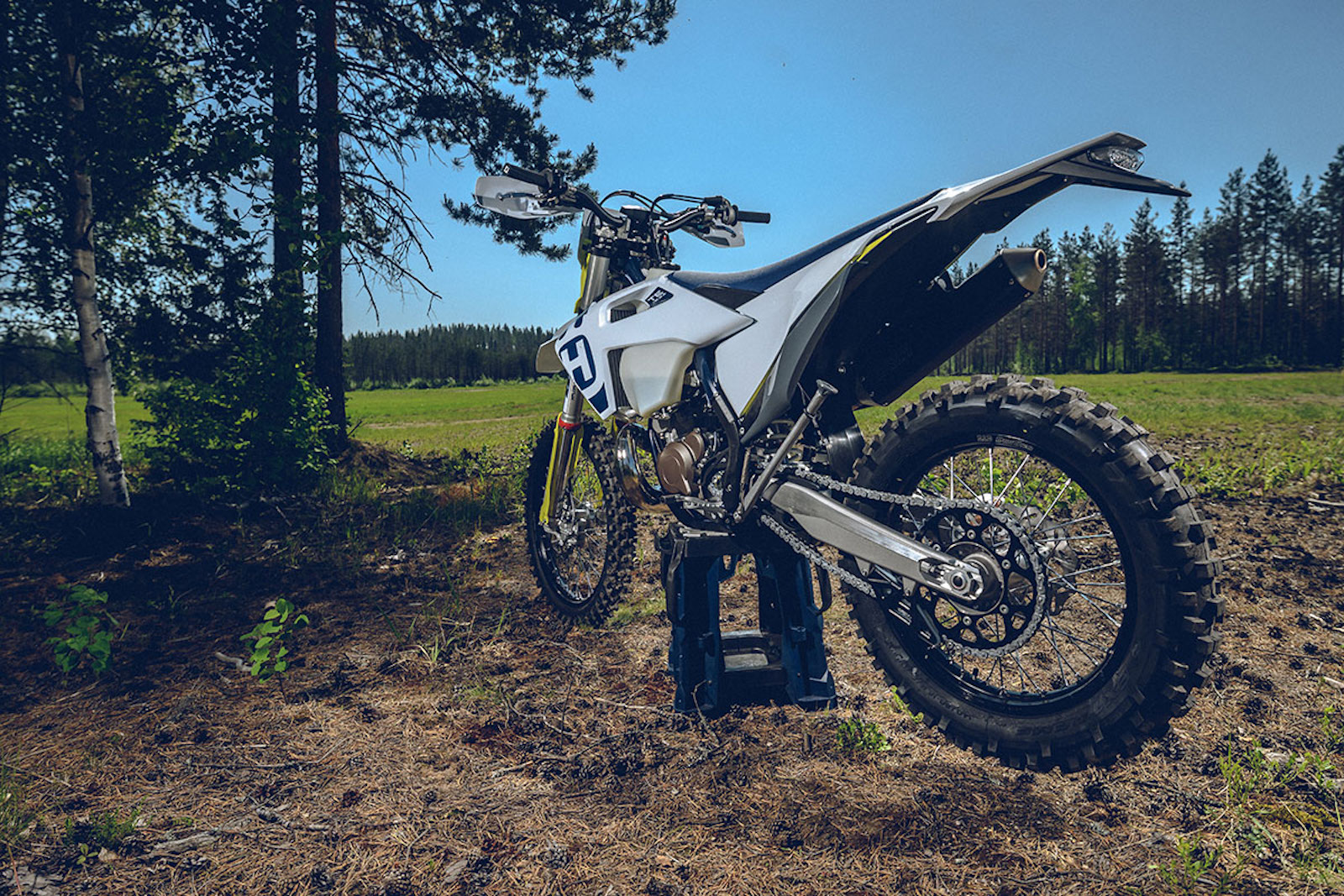 The evolution of the fuel injected engines and in particular the 39mm Dell’Orto throttle body working together with a new idle system supplying more air (and improving cold starts). There’s also a a second ambient pressure sensor which will help altitude changes.

Add to that a reworking of the air intake funnel and we begin to build a bigger picture as to why the injected two-strokes are noticeably more responsive to ride. 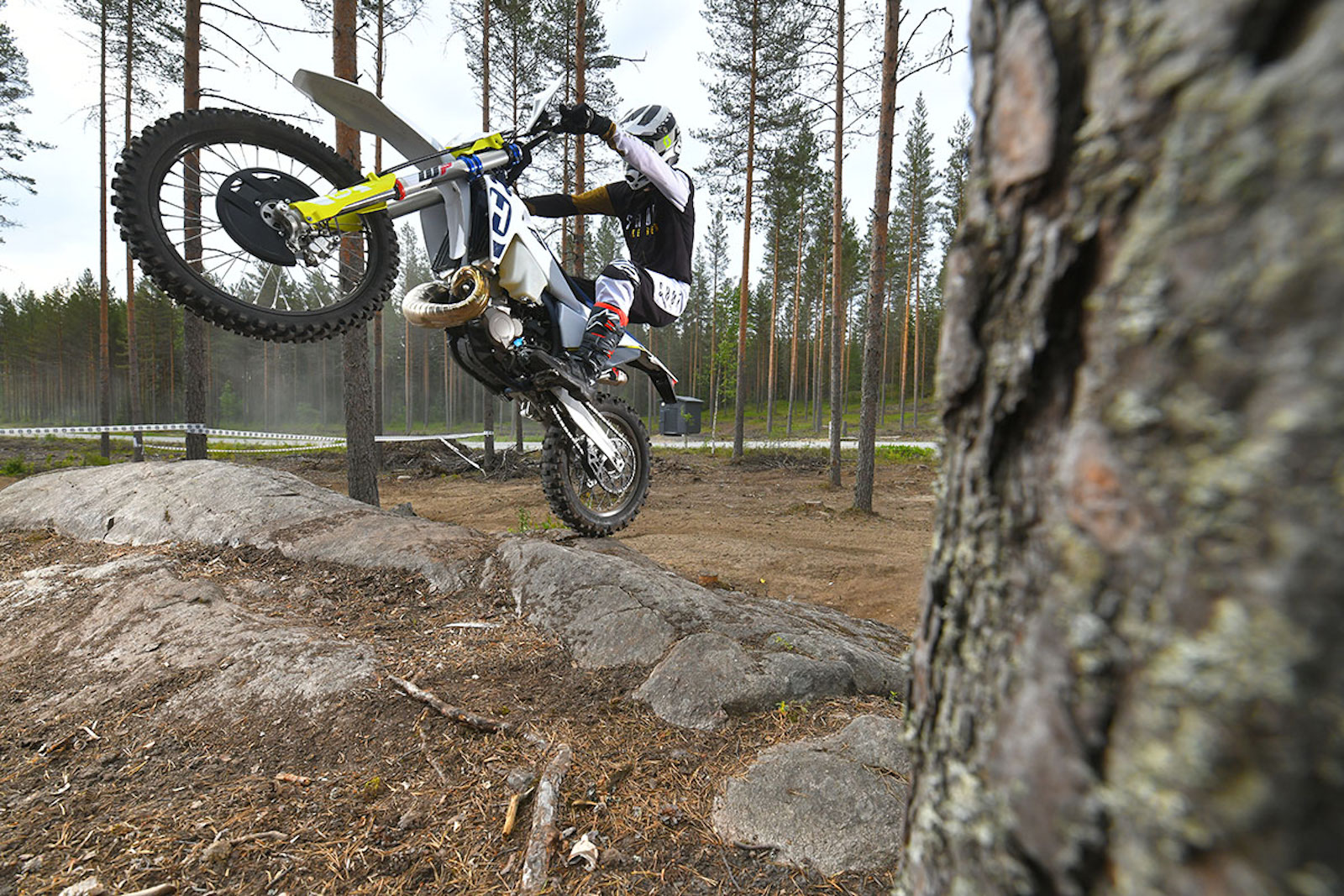 The new, heavy duty exhaust pipes standing out on the 250 and 300i which Husqvarna say use an innovative 3D stamping process to make them quieter, slimmer and more resistant against impacts.

The engineers based in Mattighofen put a lot of effort into the new exhausts on all 2020 models and, they say, are key factors behind the improved power delivery you can feel on the bikes.

Software updates are a huge part of the equation since and with all the changes listed above, plus engine changes including weight reductions, new cylinder head designs, new pistons and increased compression ratios (on the four strokes) the response you get from twisting your wrist is sharpened. 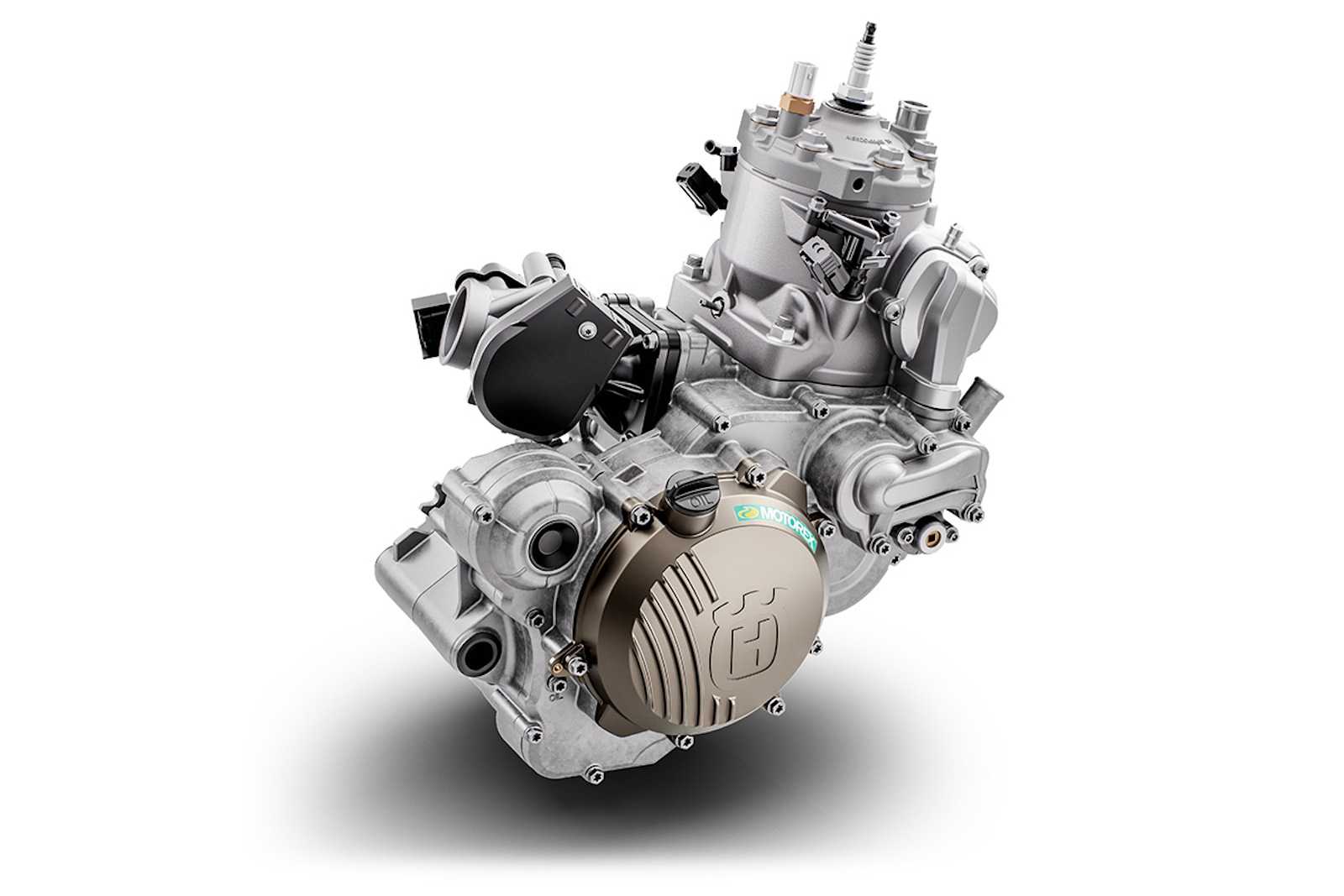 Do you notice it? Sure you do. The best thing about the 2020 models is exactly that – the super-precise connection between your right hand and the back wheel. If you’re used to carbed two-strokes it will take a ride or two to get used to it but in my view it quickly makes them superior because the power is always where the throttle is with no delay between throttle, Fi and back wheel – the only delay is between brain and right hand...

With their handlebar map and traction control switches you’ve got options with the four strokes which sport new map settings specific to each gear. Start-up and cold start, plus anti-stall are also improved with the cleaner running 4Ts that are hard not to enjoy. 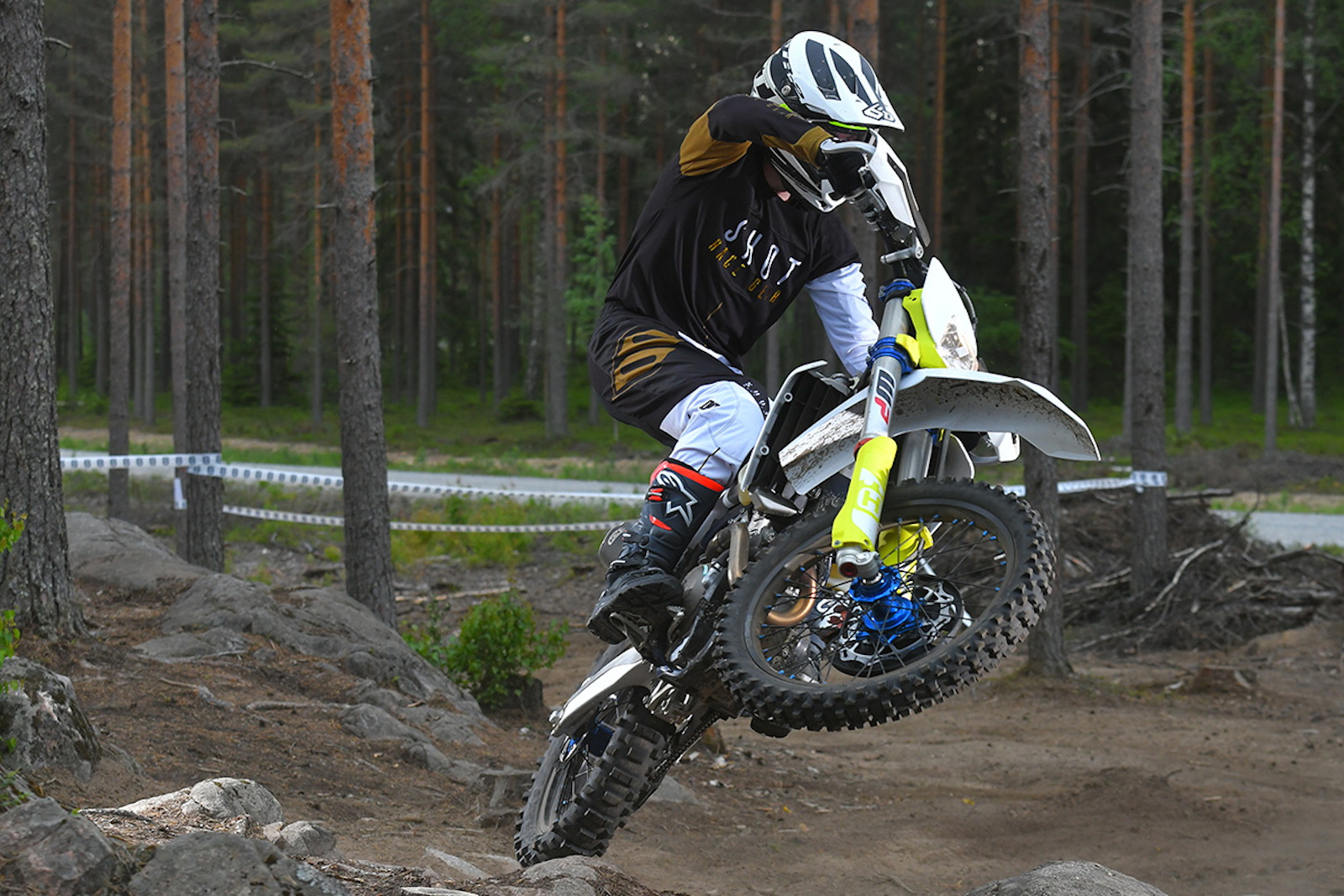 Behind the buzz-phrase littering the press information, “modifying the torsional and longitudinal stability”, the reality is Husqvarna have worked hard on the frame and suspension on the 2020 range.

The geometry of the frame is the same from the previous year but the metal behind the headstock is wider yet thinner, creating that torsional and longitudinal stability change. Aiming to improve many small sections the designers focused on “stress hotspots” in the frame tweaking the overall dimensions at the same time. 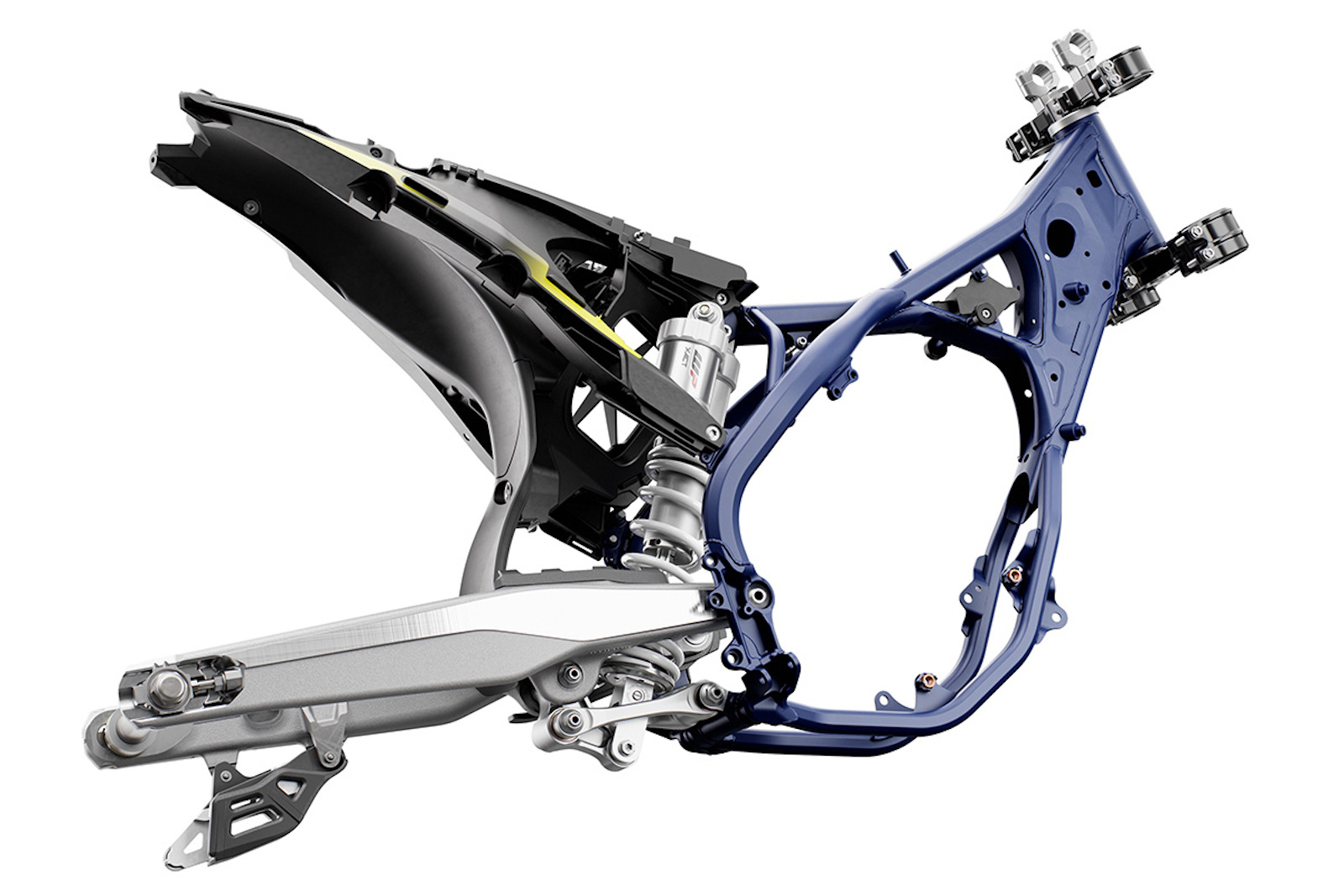 The engine mounting position is now homogeneous across enduro and motocross Husqvarna’s with the 250 and 300 two-stroke engine mounting rotated one degree more orientated down to the front.

The engine head stays, the roughly Y-shaped pieces on metal bolting the top of the engine to the frame, are also new on every model. “We used to build them from a laser cut and bended steel plate and now we use forged aluminium,” says enduro model project leader, Florian Schober. “The enduro guys always want a high rate of agility and this little part is really important.”

With so much of the 2020 Husky range taking its lead from the motocross models, this part is key in introducing the additional feel we want for enduro and it shows. There’s a new agility and improved confidence in the front of the bikes as you hit lines. I noticed it most dodging trees on the twisting and well-used test trail. The soft and sandy ground had been well-beaten by two days constant abuse and line choice got increasing important. The new chassis’ let you make those choices more accurately. 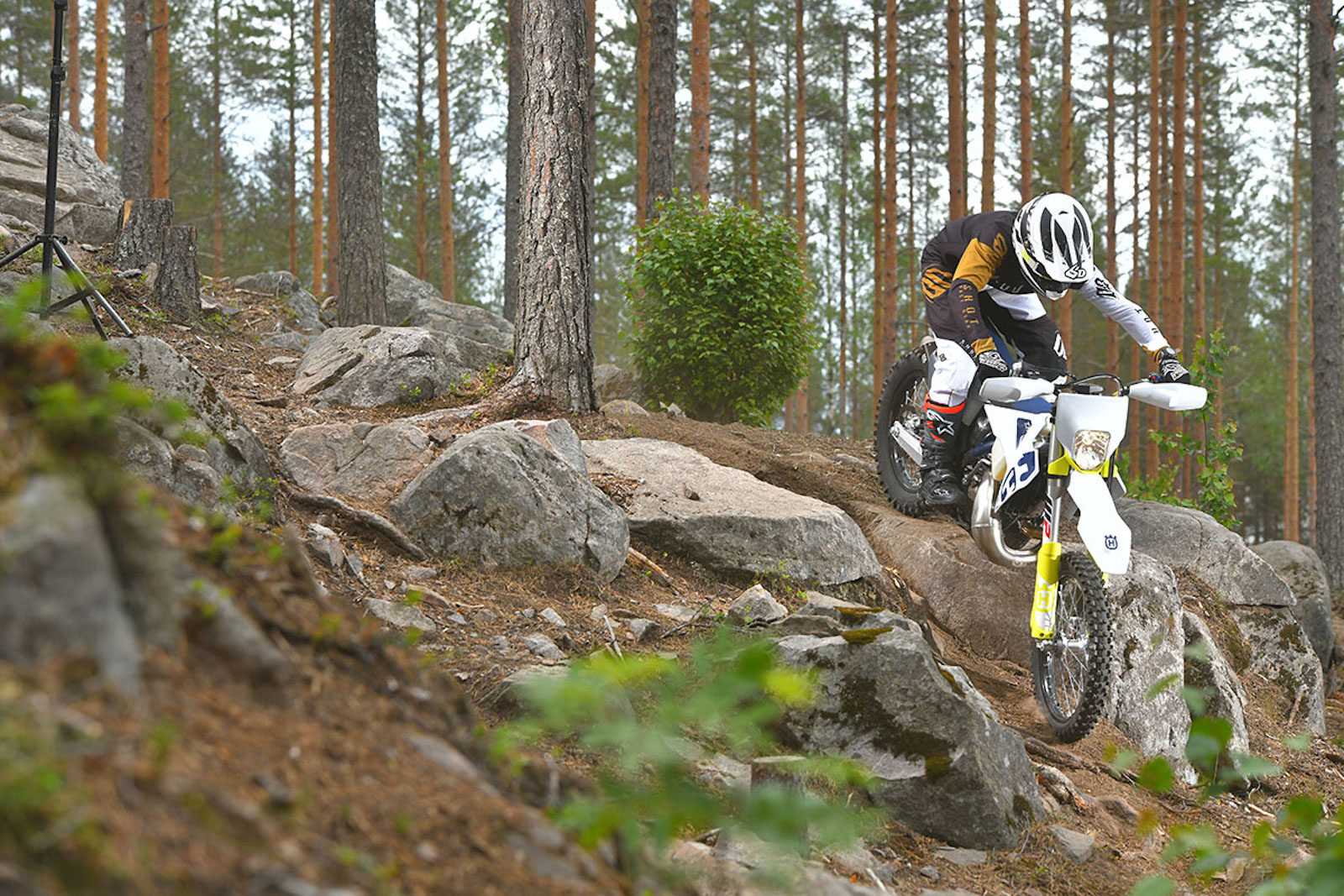 Broadly speaking Husqvarna’s engineers, designers and R&D department aimed the 2020 range towards more agility, rideability and control. Within that remit, added to the tweaks to the frame listed above, the focus was heavily on the rear of the bikes.

The 2020 TE and FE models use WPs XACT shock (not the XPLOR) which has a new main piston to improve damping characteristics and what WP like to call an “enhanced” pressure balance inside the shock – basically damping is more consistent improving rider bottoming resistance, comfort and handling.

The key aspect though, is the new rear suspension linkage which affects how the back of the bike moves, seat height plus the rake and trail all of which have a big affect on the rider feel out on the track. 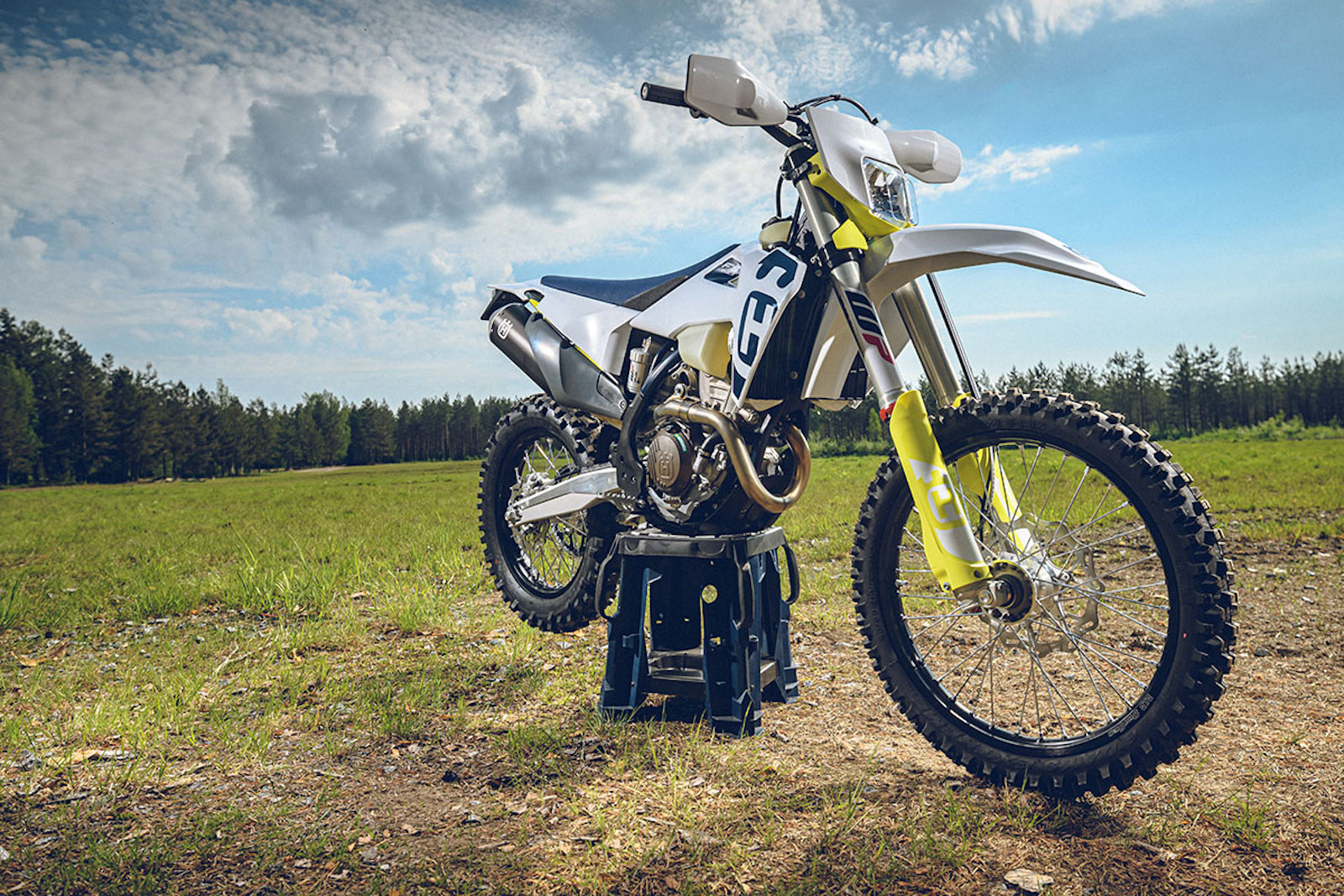 Previously the enduro models have used the FC/TC motocross suspension linkage but switched to their own enduro linkage ratios on more recent models. For 2020 however, they have turned tide and now use the MX linkage again.

The different linkage reduces the swingarm angle by one degree and combines with the lower seat to reduce the total height by 20 to 22mm. I’m 185cm tall and preferred the new seat height because it gives you better contact with the back of the bike and importantly more room when you are using your legs.

One degree difference in the swingarm angle means a slightly flatter bike and that affects the front end too – basically a more open fork angle. “We did a lot of research on the front end,” says Florian Schober, “but we ended finding that with all the other modifications the handling improved a lot already.” The head angle is 0.7mm more open now and this has also the increased trail by a small amount – though Schober was not sure of the exact number. 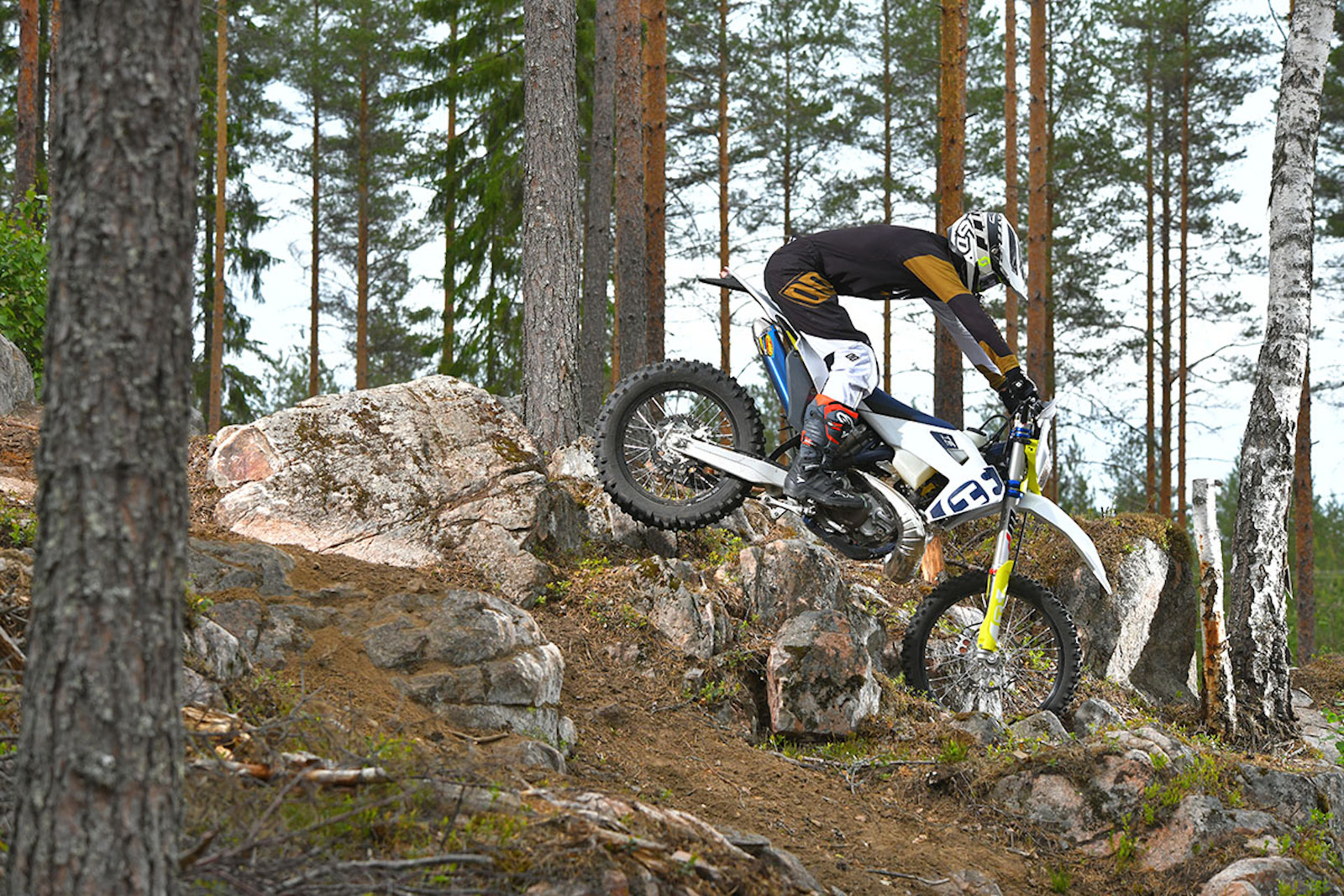 The WP 48mm XPLOR fork settings are changed however, to improve the mid-range of the travel and increase bottoming resistance, just like the shock. The result is a more stable bike at speed and one which is more settled when you come on the brakes particularly when you hit bumps in a braking zone.

The new stable chassis feeling is noticeable when you’re standing on the pegs, on the gas and basically living on the back end of the bike. The shock is more settled and the different feel from the chassis makes it easier to track and control your lines at speed.

One prevision is the spring rates are the same across all models, which strikes us a little odd given the weight difference between the 150 and 501 (almost 10kg difference).

We hear you racers who want more from your suspension than the stock WP kit can offer – but that was ever the case. We’re not saying the new suspension is ready for top level racing (if you want that WP has the upgrades of course). It is better though and a jump forward for stock kit from WP. The important thing is how the new bikes steer and that gives you more confidence. 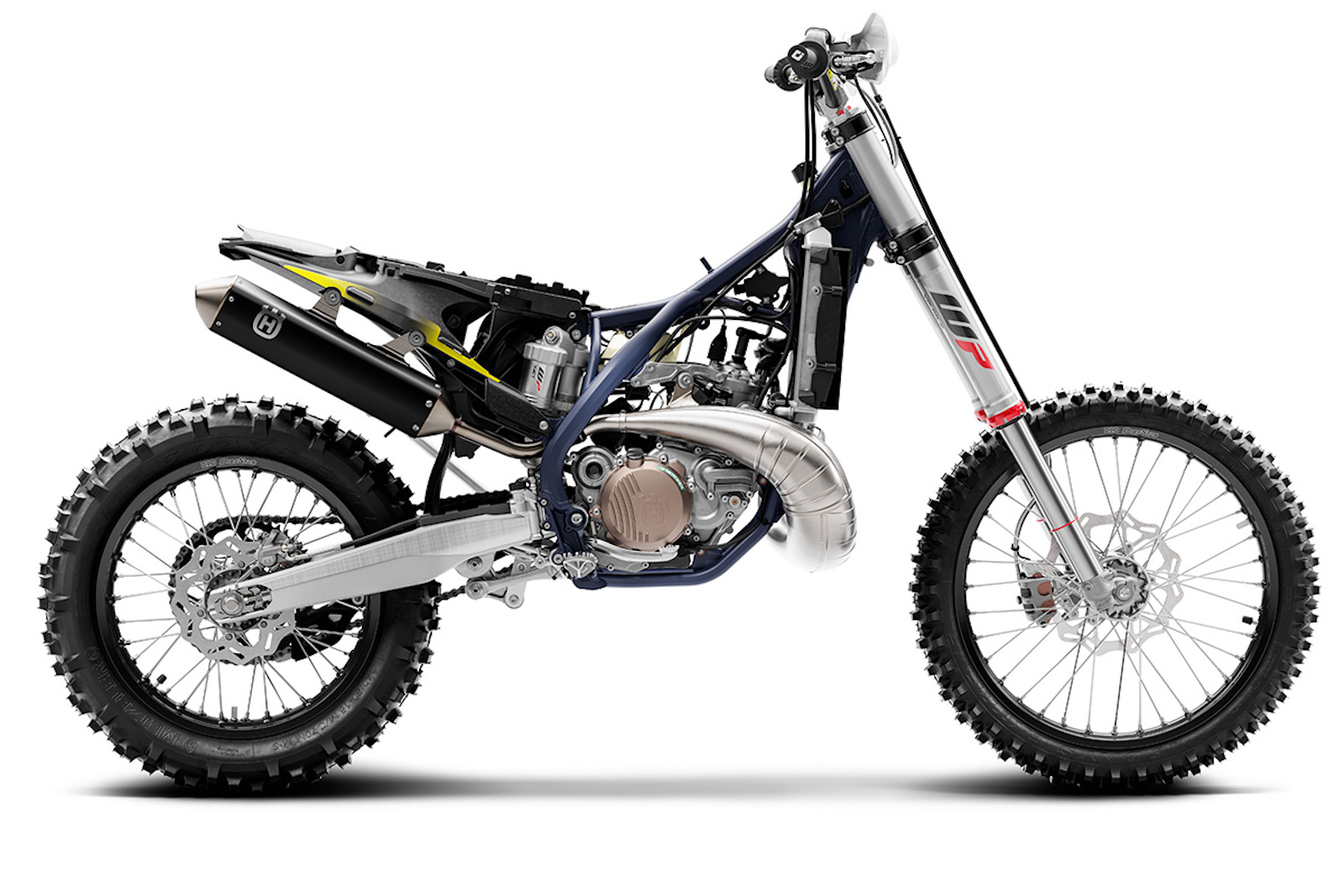 A 60% redesign on the 2020 models includes a whole heap of re-shaping and adjusting of the bodywork.

Every new model has a lower centre of gravity for 2020 with 12mm lower radiators and a 250g lighter, two-piece subframe key elements here. The bodywork is redesigned to fit both the radiators and subframe and the results is a slimmer feeling and more symmetrical bike underneath you whether you’re sitting, standing or transitioning between both, legging your way through a tough rocky section or dropping down a steep bank.

When you’re on the bike the parts of the bike you touch and use for control should be anonymous, ignorable and unimportant because you want to get on with the job of riding.

And that’s the change here. The new bodywork, seat and exhausts shapes are less intrusive on the ride. 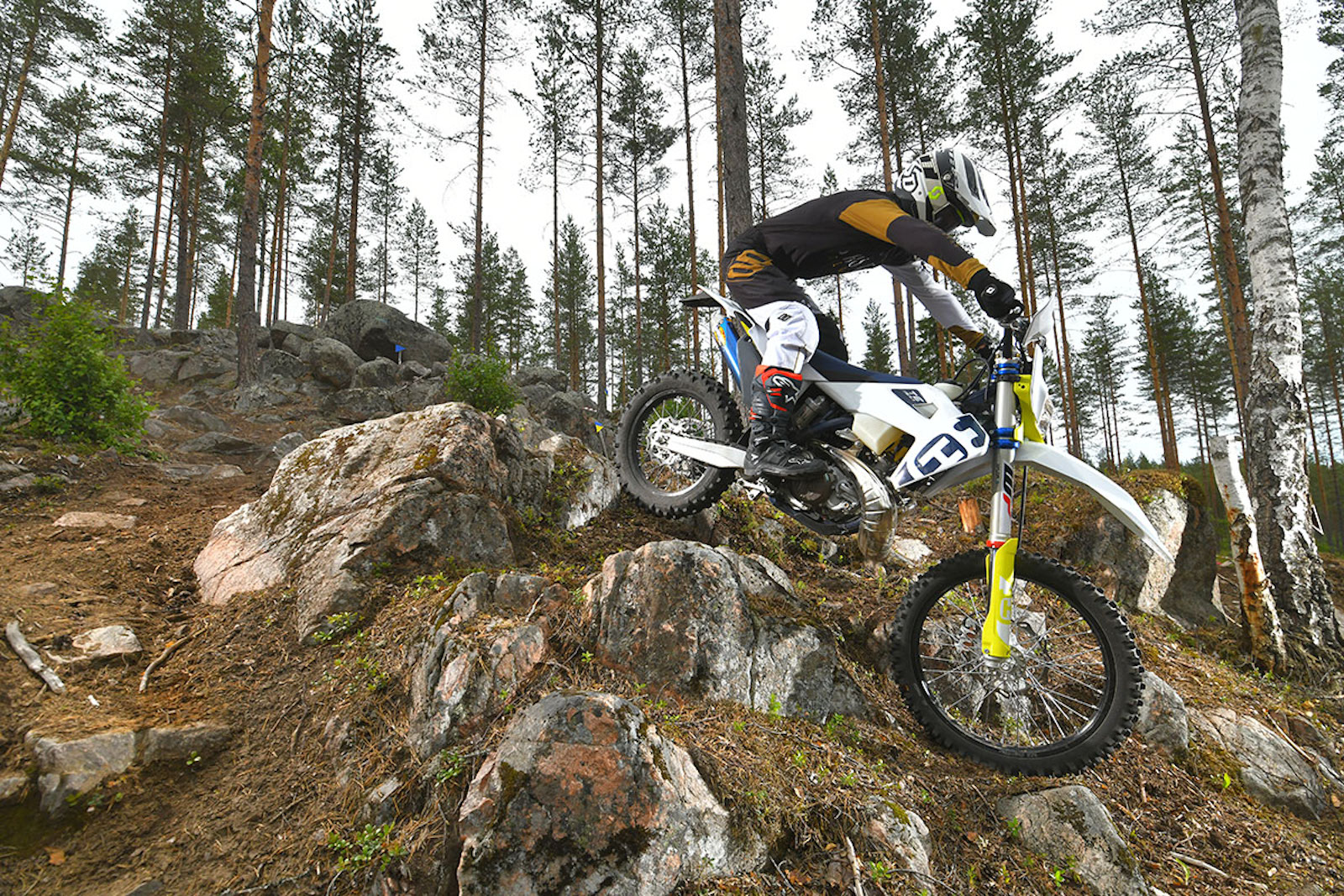 Husqvarna’s carbon composite subframe uses 70% polyamide and 30% carbon fibre for a blend of strength and weight. Overall the subframe is also 50mm longer for 2020 and joins the new-shaped and lower seat to help the feeling of control on the bike. Narrower but a bit longer, the bike sits around 20mm lower at the back.

The middle section of the frames don’t feel narrower – they can’t be if the frame is the same – but the different position of the tank and side cowling in the corners gives you a better place to swing legs about. When you’re hanging off the back and riding down a rock step or even just moving around as you turn up and over an obstacle, the new layout is more welcoming too. 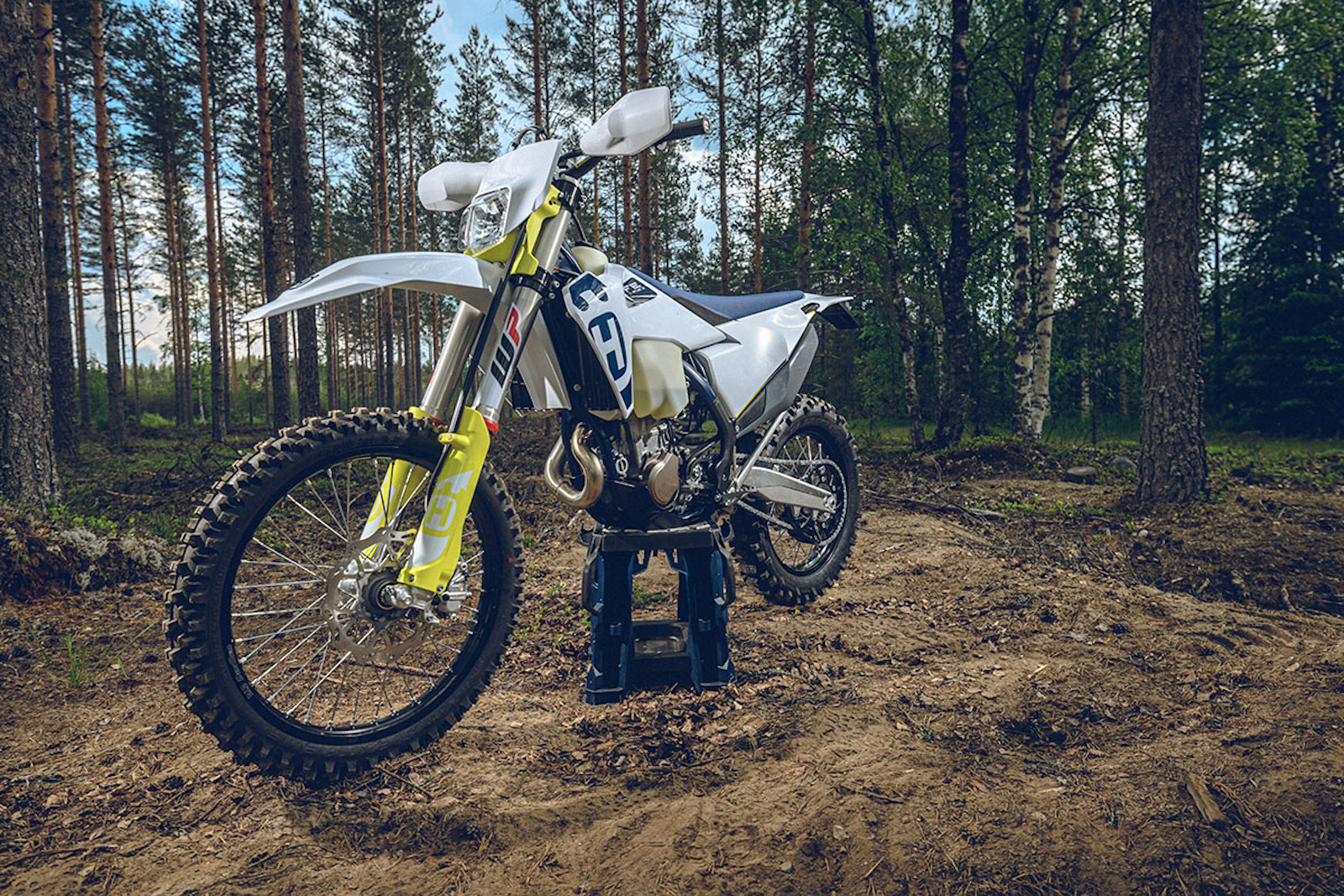 So Husqvarna improved their TE and FE Enduro models for 2020. No shock there we hear you say. But the changes for this model year update are significant enough to make the older models feel like a different generation we reckon.

A lot of that is down to the new, tighter, air and fuel mixing process going on with the 250and 300i and we make no apologies for focusing on the biggest selling, two-stroke models.

The fuel injection technology hasn’t change much but it has improved in performance, tightening tolerances, adjusting the power valve working together with the engine, exhausts, airbox plus a new ambient pressure sensor and a new throttle body for a more precise power delivery. The four-strokes are not forgotten and a lot of work up top in the engines has added zest to their performance.

Who doesn’t want a better feeling chassis too? The stock WP suspension is not leaps and bounds better but more up to the job. It is helped by the improved feel and feedback for steering. In particular the lower sitting rear-end keeps the bikes in check on the track and also lets you leg your way up a pile of rocks easier. And easier is always better.