With KTM Factory Enduro team riders, Jonny Walker and Taddy Blazusiak in attendance, and the seven-strong range of the 2020 EXC models lined up, our test rider is a very experienced national level enduro rider, Andrew Reeves. Reevesy gave us his riding impressions, one bike at a time as he tested them…

Hopping on the big 500 fresh in the morning sunshine might seem a bit brave but for the first test ride of a long day it was a great way to learn the track and get a feel for the new bikes on the 30 minute lap KTM laid on for us.

As first impressions go it was a good one. It gave me a good feel of how good the new seat cover and foam felt, how in control you feel with the new bodywork, the slick gear box and generally how they felt to get on and ride. 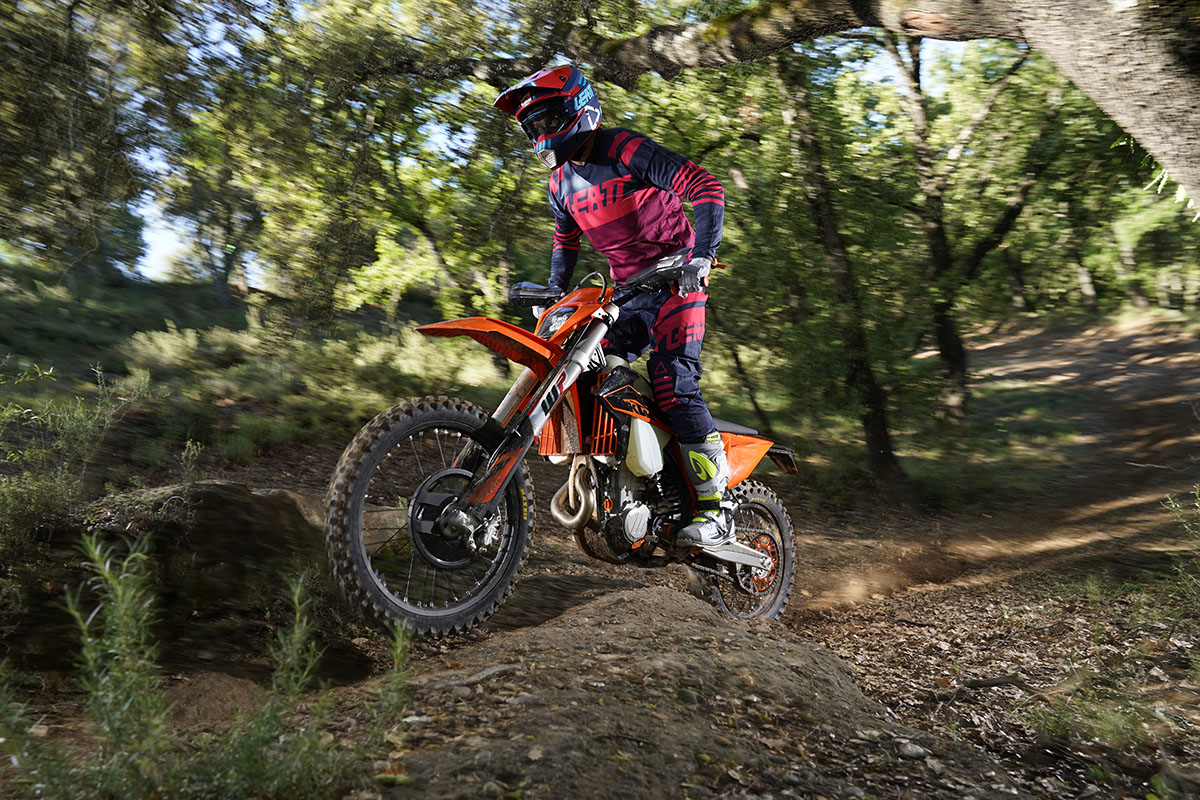 Those early impressions stuck across the day as we did more and more testing across the whole seven bike range. Although they are really quite different bikes from the new 150 TPI to the big 500, they all have a common feel to them – the only thing I noticed early on and never quite got used to was the height of the footpegs and how close my boot was to the gear lever – I’d change that if it were my bike.

The 500 though is deceptive and although you might think it is a bit daunting it didn’t feel like an open class bike with so much power. Just a bike happy to deliver power steadily more and more until you hit warp speed.

You don’t have to travel at warp speed with it and that was one of the best things about it – you could stick it in one gear, third usually, and ride all day long. It is just as good purring along like a pussycat as it is at roaring away like a lion when you give it some.

The first thing to say about jumping on KTM’s biggest selling enduro model, the 300 EXC TPI, is I’m pretty much brand new to fuel injected bikes. My own 300cc two-stroke is carbed (Andrew rides a Beta), so this was always going to be a fascinating ride.

The first thing I noticed was how quick the throttle action is, I really noticed there wasn’t a cable attached to a spring inside a carburettor and had to get used to how light the twist grip felt.

That light feeling makes it responsive and you have to be more precise with the throttle when riding where my bike normally has a bit of a delay attached to the throttle as the cable, the carb slide, the reed valves open. The TPI has none of that and is instant.

Once I got used to it, I found it a good thing when you see a bump or hole in the track and want to pick the front wheel. My bike takes a bit more effort getting that wheel up where the 300 TPI is much more precise off the throttle and eager. 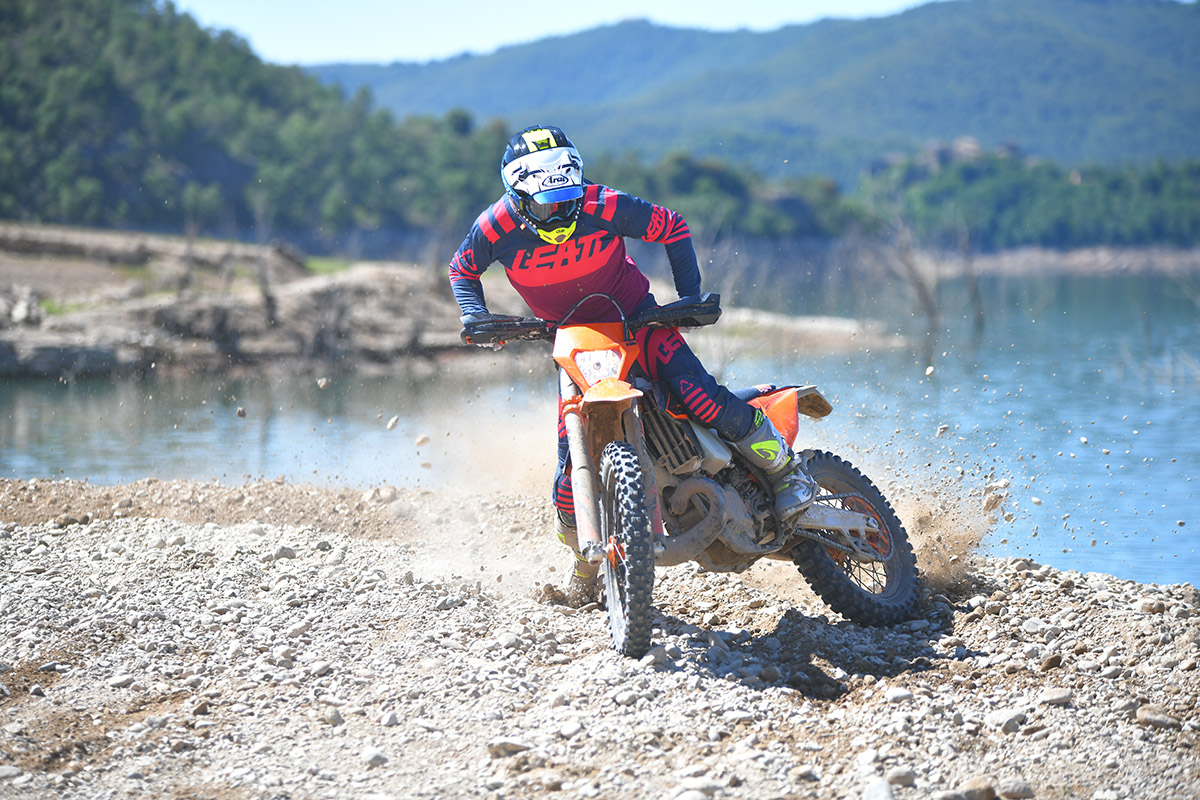 I started to notice the new back end is better and tails off nice between your legs – I really noticed it going downhill when you’re hanging off the back. One small point to make is I couldn’t really get my right hand in under the fender to lift the back of the bike across or up if I wanted to. The grab handle isn’t really there anymore like it was on other models.

I had a really good, mixed test ride on the 300 and tried to mix up extreme stuff, fast stuff and in the trees. Though still plush, the 300 feels softer sprung than the 500 with more movement over the bumps. 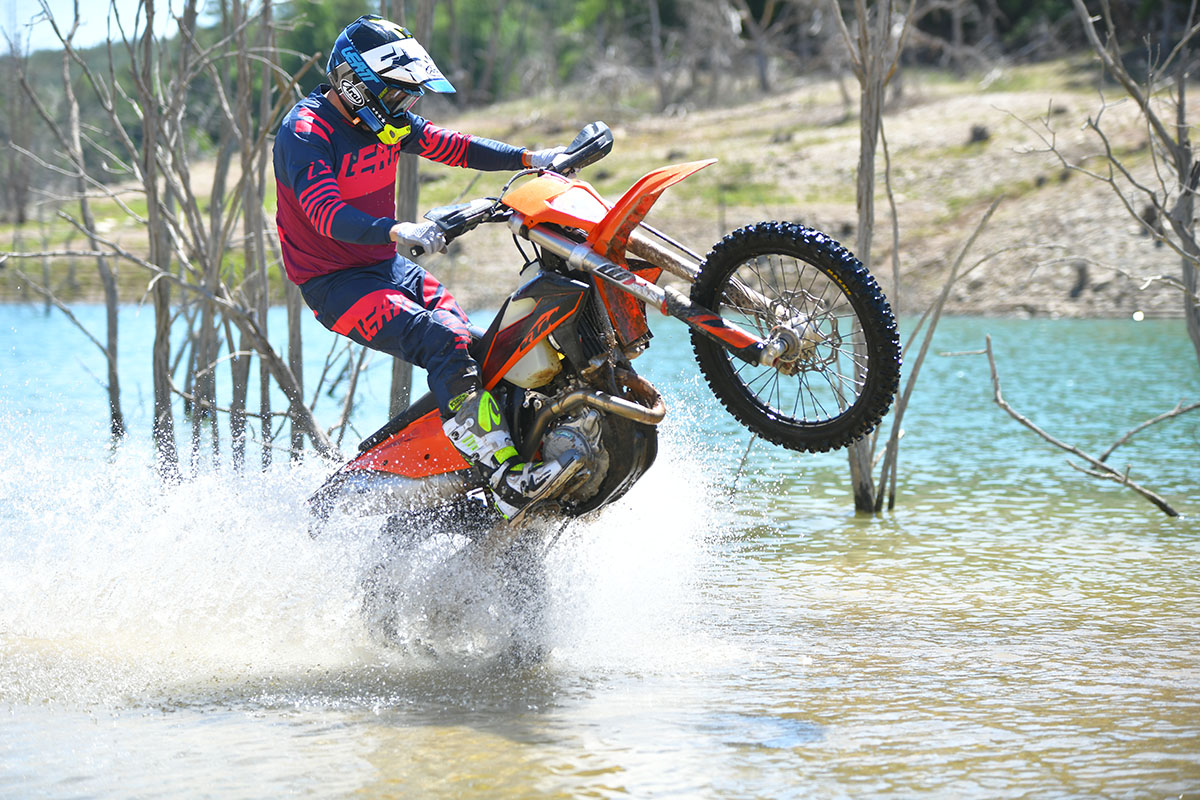 If the 500 is deceptive then the 450 is better at laying its cards on the table. More ready to hit warp speed simply because it feels like there is more purpose.

Like the 500, you don’t have to travel at warp speed with the 450 and again it is one of the best things about the big bikes that you can ride lazy and stick in a gear or two all day long and it will keep pulling.

What’s good again is how the chassis works for you with the heavier bikes. Big bikes like this used to be big, heavy things but not anymore. The feel and power from the brakes comes out the woodwork when you’re hauling into a tight and rutted corner on a 450. The added speed and weight make the corners come up fast but the brakes and new front end can cope with it. 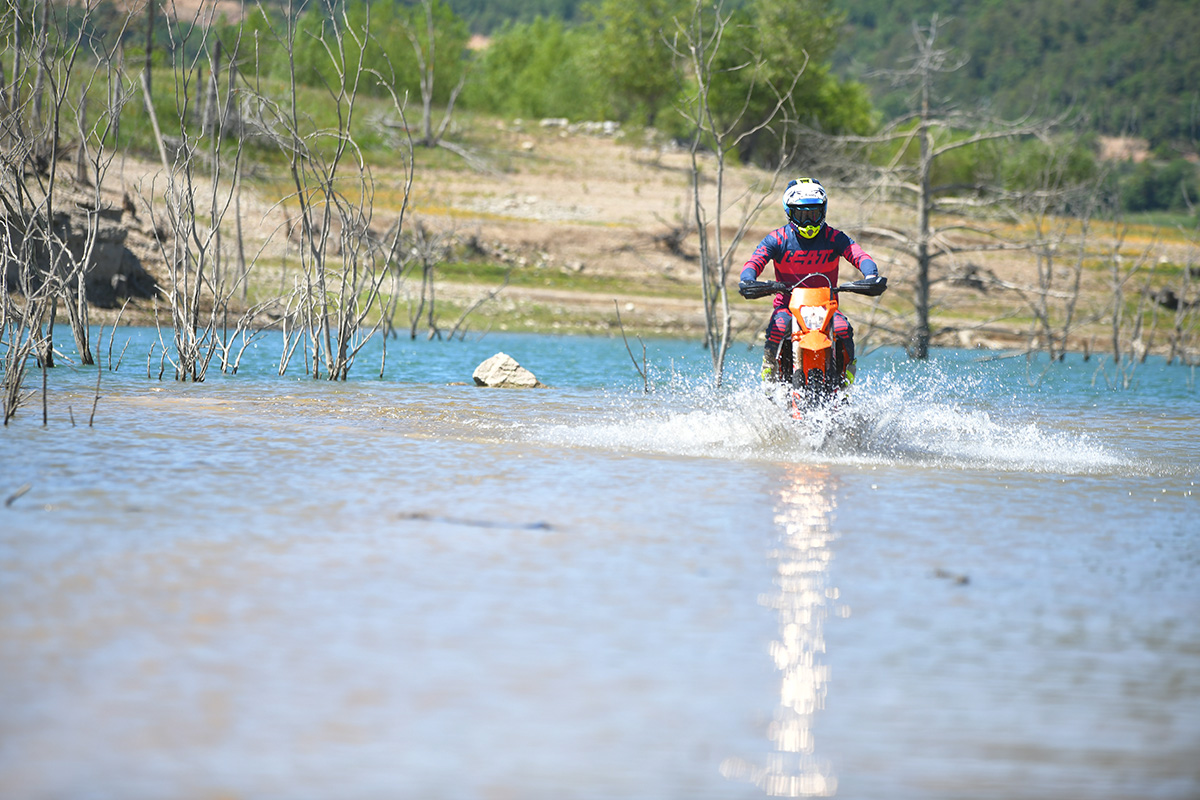 Speaking of singing, KTM’s new 150 loves to sing. On some of the fast sections of this test course it felt awesome to haul up through the gears and keep it buzzing away. My first impression of the 150 after the bigger bikes was it felt like a slightly heavier E-MTB bike only an angrier one!

People shouldn’t be put off by the 150 capacity because it is a really capable bike that can track across rocks or rough ground nicely. Gear choice matters more of course – this is a bike you find yourself changing gear a lot with but you expect that on a bike with less capacity.

Like the bigger TPI models, the throttle response is quick to react. I quickly got the feeling for how much I could push it, like the 250 four stroke, closer to the limits where 450 four stroke for example is more about your limits often. This one’s definitely ready to race.

I must admit I wouldn’t count myself as a four stroke rider so getting on and off the different EXC-F models was a learning curve for me. The 250 F though really came as a surprise how good it felt. I’m *coughs*around 14 stone (90kg) so I was interested how it coped with my weight. The answer is much better than you expect.

Again, that feeling of control you have with the bodywork is great and really confidence inspiring on the 250.

One thing I made sure I tried on this bike the different map settings on the handlebar switches. I went through them all: map one, map one with traction control, map two and then the same also with the TC switched on.

It honestly makes a difference and it quickly showed how it can help on some of the tight, uphill dusty turns in the cross test. Without traction control it would break away because I felt so confident and was pushing it. Switch the handlebar switch quickly and the traction was there.

Where the big 4T bikes can be used best for their grunty power and tractable drive, the 250F needs to be revved more and works best when you use the mid and higher revs. You have to work a bit harder with the engine and the gearbox. But it has more go than I expected and like I said, I found I was losing the back a bit under power. This is one bike to really build your confidence on.

Put very simply the 250 feels exactly the same as the 300 to me but with less grunt. That sounds obvious but they are very similar bikes with the same chassis feel, same fast throttle response and the same ready to go attitude from the engine.

The 250 really works best if you attack more and live in the mid-range so it makes for a naturally more attack-minded bike – with the 300 doesn’t need you to be ‘on it’ as much. 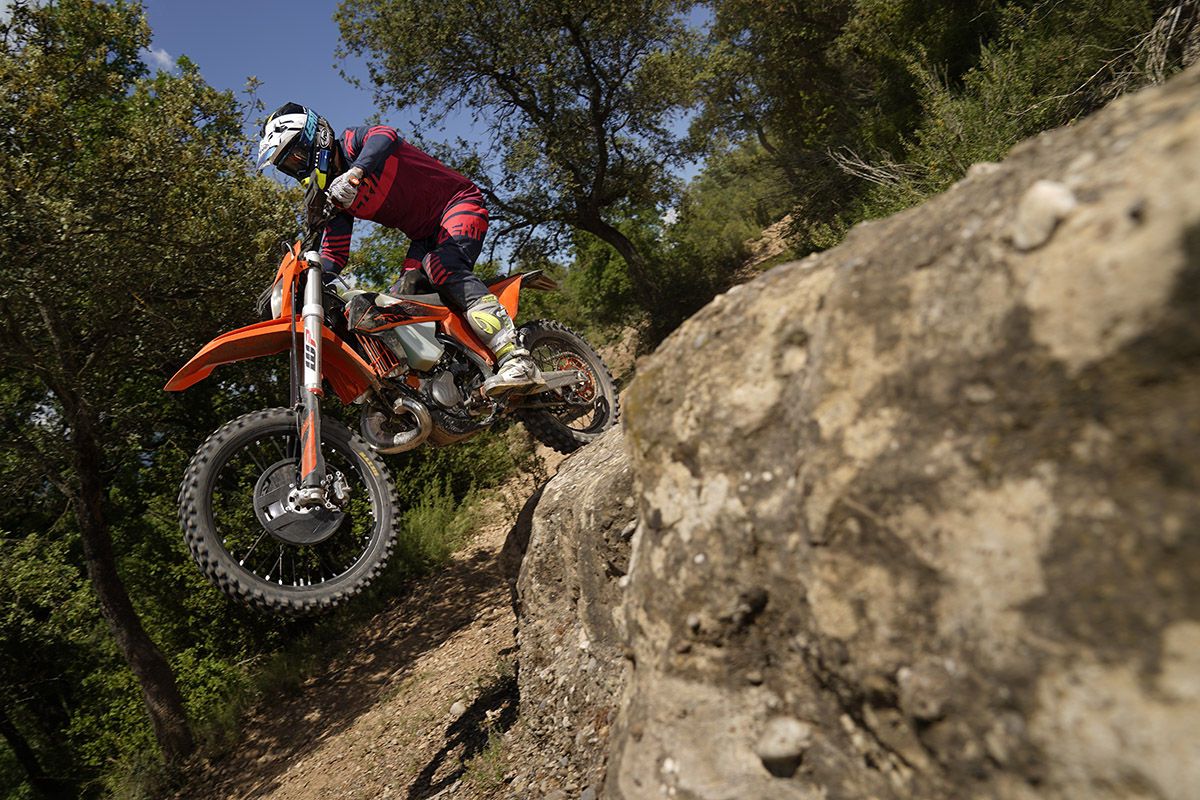 By now in the test I was really appreciating the new slightly stiffer forks and particularly the feel from the front end of the bike KTM had talked about in the presentation. By now in the test day there were some ruts forming in corners that really needed you to get in and both the 250 models showed me how accurate the chassis can be even when braking bumps are trying to throw you off line and with good feel from the Brembo brakes too.

I’ve already said how I was a TPI virgin and I’ve always been a 2T owner and racer so it comes as a surprise to me to say the 350 EXC-F four stroke was my favourite bike on this test.

The reasons for that are simple: it feels like the best balance of power, weight and handling in the KTM range. The 350 EXC-F feels like it would be a really enjoyable, ‘go for a mid-week, after work ride’ kind of bike just as much as I could see myself enjoying racing one. Like the 300 2T, the 350F delivers power that can be docile and careful or it can give you the grunt when you want it. It gets you in less trouble than the bigger four strokes but can still get you out of trouble like they do.

It shows off the KTM chassis really well too: there were a couple of tight, uphill hairpin turns which it got into and drove out of really nicely. That sudden need you find to get into a rut, turn and drive out always felt good on the 350 F.

Honestly speaking I wouldn’t have expected to enjoy the four stroke as much as I did on this launch test. It came as a surprise how usable they all were yet still have quite different characters. The 350 F was my favourite and goes a long way to show off the best just how good KTM have made the new chassis. Combined with the new ergonomics they really are easy bikes to ride.

I didn’t expect to gel so well with the TPI models either and the 300 EXC was the best in my view. I was really amazed by the 150, that has great potential to be a brilliant race bike and a great way of learning the craft of enduro. 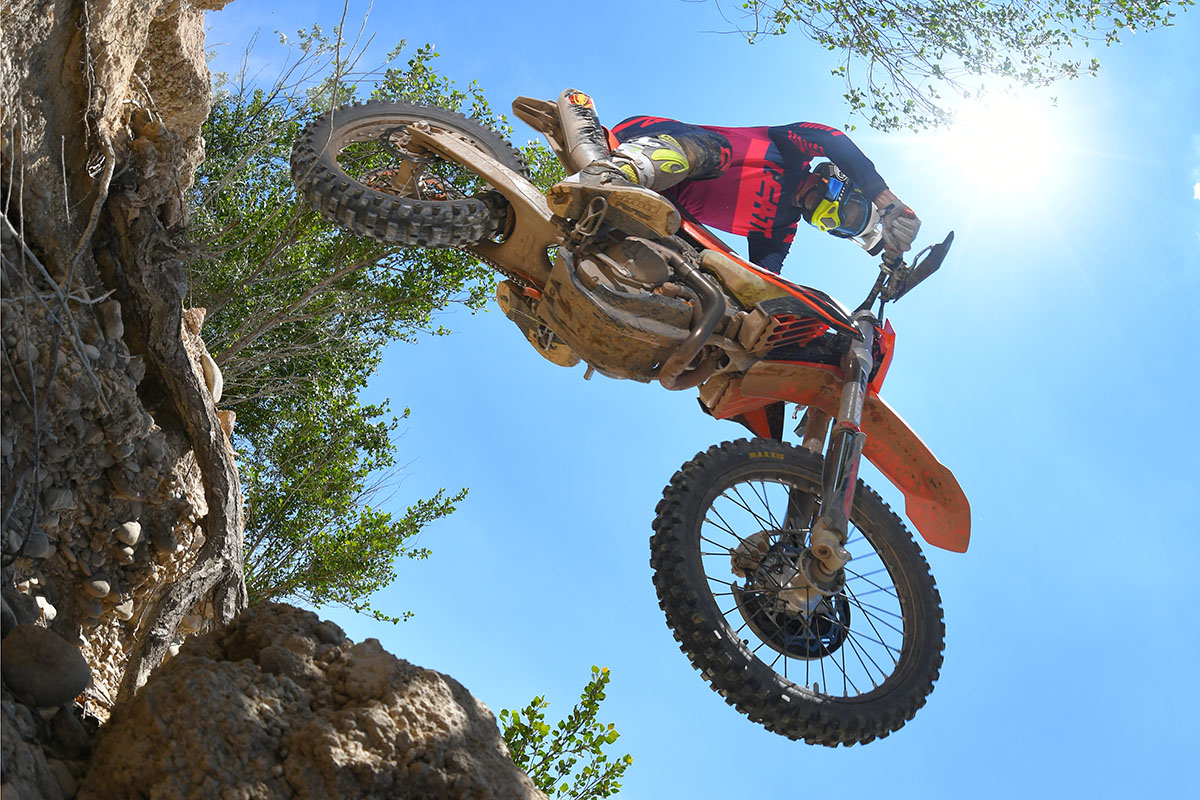