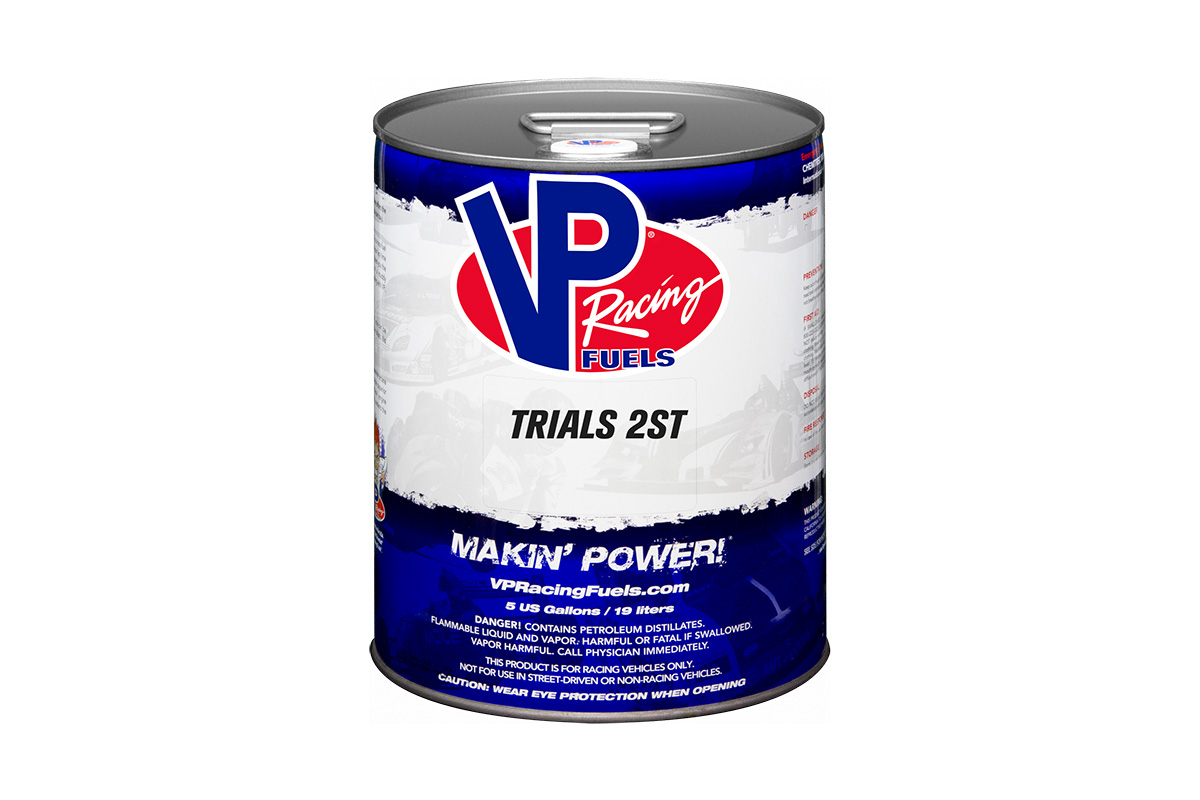 VP Racing Fuels has launched a performance fuel for trials motorcycle engines which got Enduro21 thinking, would the VP Trials 2ST also work in two-stroke Extreme and Hard Enduro bikes?

VP has been working with FactoryONE Motorsports to develop VP Trials 2ST fuel which is one of those products which make you wonder why it doesn’t already exist?

VP’s work with Sherco USA and their riders including Pat Smadge has focused on developing a fuel that would “accelerate clean and crisp, from low RPM’s to full throttle, to help improve the performance for the demands of trials riding.”

When Enduro21 heard the news our first thought was, ‘would that work in a bike for extreme enduro?’

VP explain the development with the Sherco USA riders centered on how trials engines are required to perform. Typically trials bikes quickly go from idle or very low rpm to high revs and high engine load which places heavy demands on fuel and VP say leads to variations in responsiveness if you use stock pump fuel. For any rider in the hardest of Extreme or Hard enduros that is familiar territory.

It might not be widely appreciated but the fuel you buy from a gas station can affect your bike’s engine performance – if you’ve done much travelling to ride and buying fuel in different countries you’ll almost certainly know this.

Different octane ratings, varying amounts of additives, different ethanol levels, no lead content… modern fuels from the fuel station pump are not what they used to be and some of that has a negative effect on two-stroke engine performance.

As FactoryONE Motorsports’ Ron Sallman points out, “pump gas varies from state to state, as well as by elevation.” Sallman says it plays a major part in why they saw vast performance differences between national competitions and why they went to VP and asked them to develop a better fuel possible for their Sherco trials bikes.

So does this mean we need a can of race fuel in a two-stroke enduro bike? Good practice is always to use fresh fuel from the pump – old fuel loses quality – and from a garage which has a high turn-over of customers because that garage way out in the back of nowhere with two customers a month isn’t going to have the best quality fuel (as a general rule).

Should you use it in your two-stroke enduro bike? If you want the consistency of performance then why not?

Using consistent quality fuel, more consistent than from a pump gas fuel, is better for your engine. Fuel stations offer different rated pump fuel, across Europe that is normally unleaded (95 RON) and Super Unleaded (98 RON). Some fuel stations also offer a slightly higher octane rated fuel, for example, Shell and the V-Power fuel which some people in our enduro community commonly use.

Using a can of fuel like VP’s Trials 2ST, which has the same octane rating as regular gas pump unleaded, would guarantee consistency of performance so long as you store and use it correctly.

Some Pro race teams use higher octane race fuels and if you’re running a higher state of engine tune, or racing high rpm at tracks this is more meaningful.

A higher octane rating means that the fuel will tolerate greater compression (more pressure) before it ignites. So if your engine is tuned or has a higher compression head, a higher octane can be a benefit but you don’t need the highest possible octane rating, in fact it can often be pointless and at worst can damage an 2T engine. Remember that KTM (for example) design their engines to run on regular pump gas.

There is a range of different race fuels out there on the market including VP’s VPR and U4.4 options which are direct replacements for pump gas fuel for two-strokes. Each has specific applications depending on the tune of your engine (very important), its compression ratio, jetting, altitude, weather and of course the type of riding you do.

Is it worth it?

Not everyone is into off-road to race of course and it makes no sense to be using it for trail riding. Whether you are or not, most regular riders or those out on the trails will find good quality gas from the pump is obviously fine. Like we said earlier, if you choose a bit more carefully where you fill up you will have no problems.

There are a couple of things to bear in mind regarding race fuel, not least it is more expensive and some event organisers do not allow it. On the plus side the expense can be off-set over time with better engine life and improved performance.

We’ve taken a closer look at this because it might be something you want to consider if you’re riding specific events and/or you have regular issues with fuel quality in your two-stroke.

Quite obviously it is not convenient to carry a giant barrel in your backpack if you’re going trail riding but, again, we’re not really talking about using it for that purpose.

If you’ve used VP fuel or even tried this VP Trials 2ST fuel then let us know, either in contact below or better still start a discussion on our forum – that’s what it is there for.

We’re getting nothing out of this from VP Racing by the way, it is just fuel for thought (pardon the pun). VP’s range makes interesting reading if nothing else: www.vpracingfuels.com