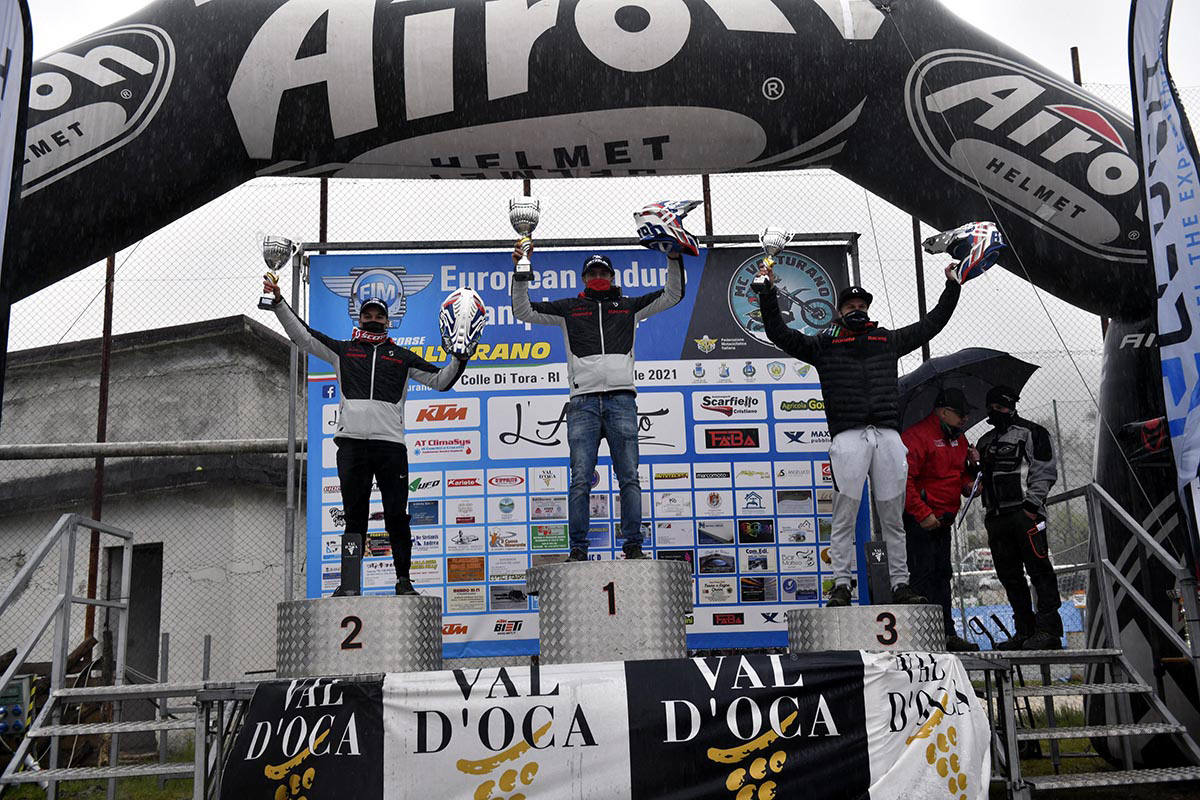 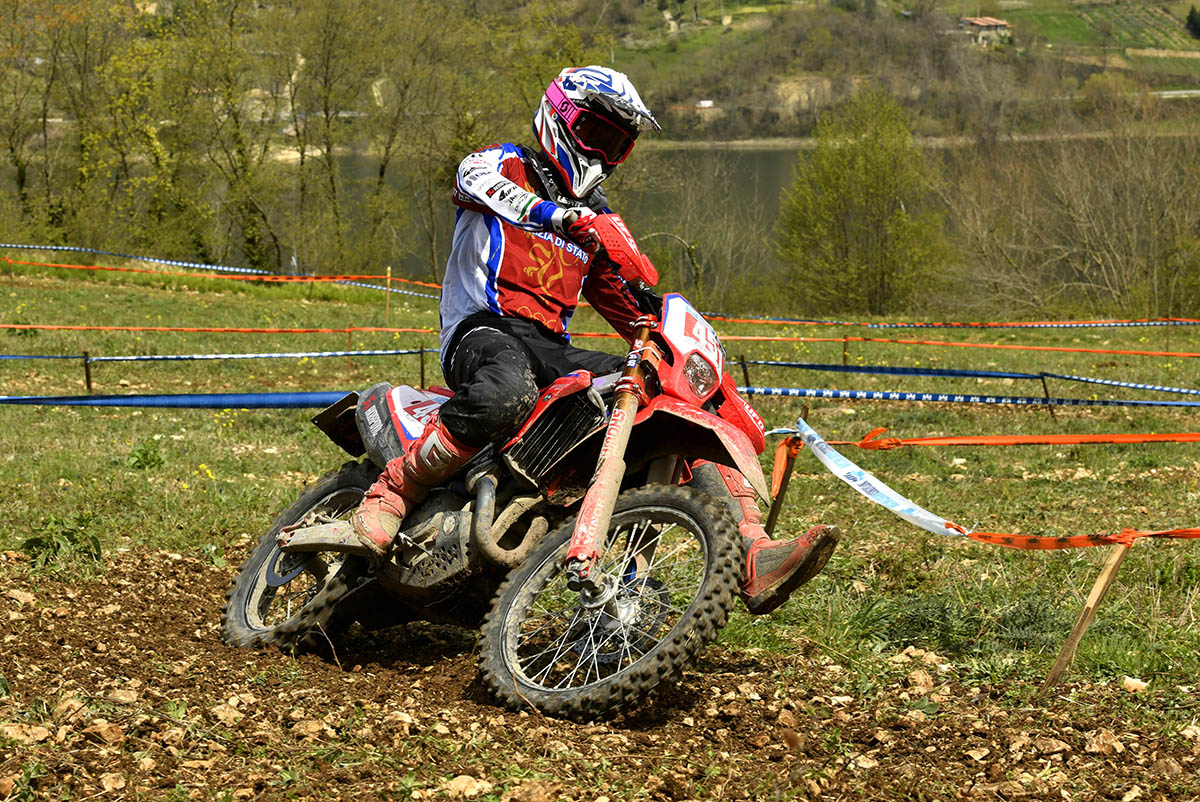 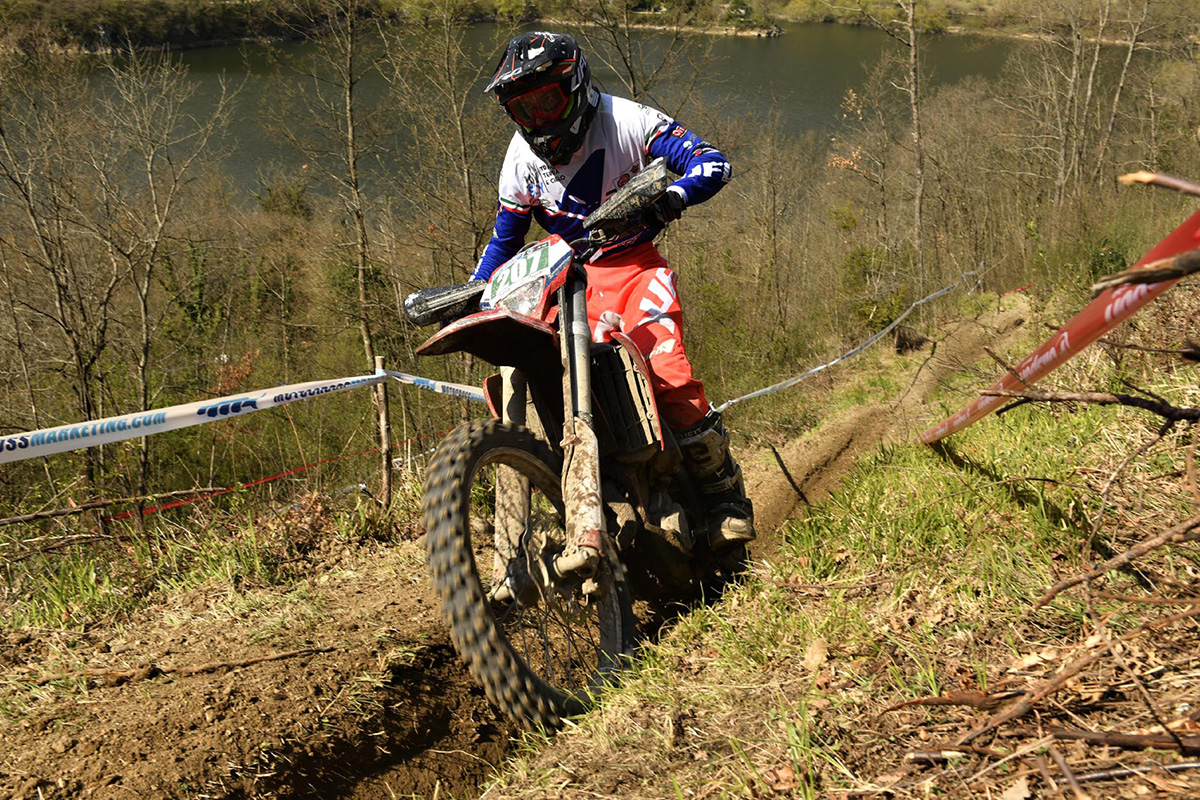 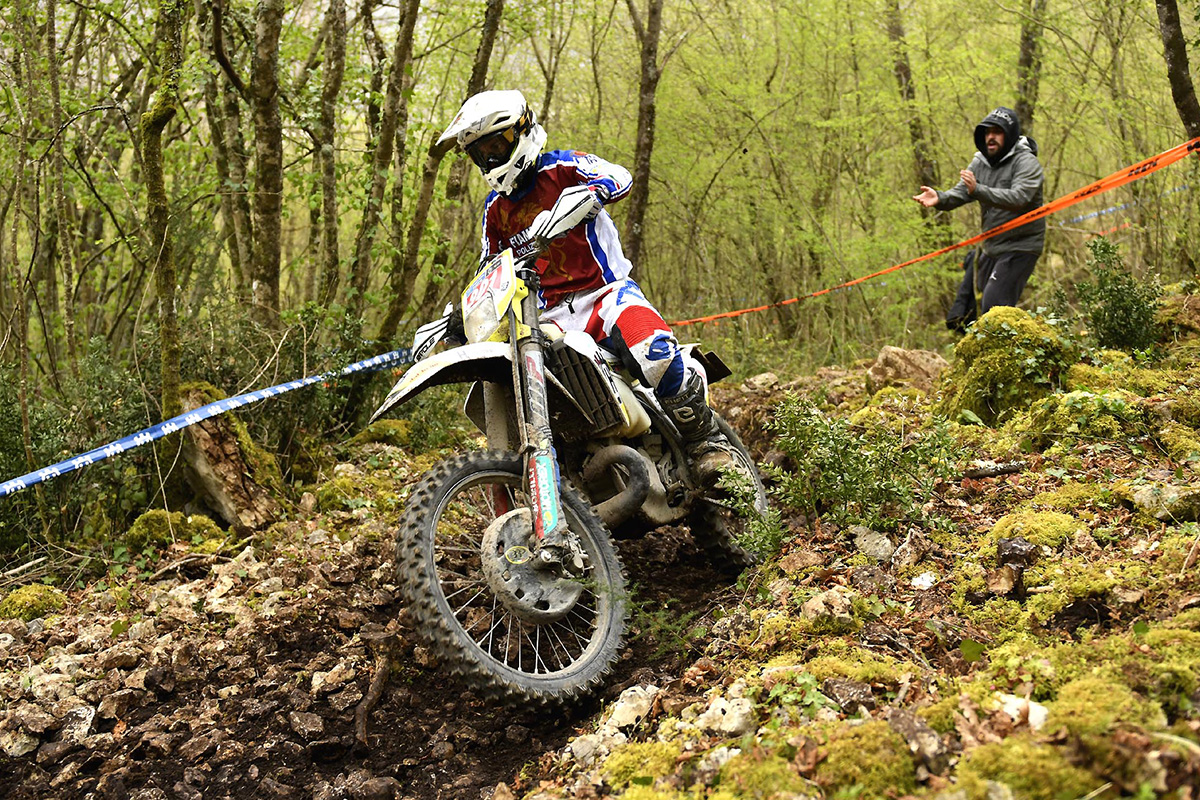 Honda RedMoto riders dominated the opening rounds of the 2021 European Enduro Championship in Italy with Thomas Oldarti winning overall across the two days – Enrico Rinaldi proving the best of the Euro fighters taking an early points lead in the series.

It counted as nothing in the end, “just a training ride” ahead of the next Italian Enduro round and the impending EnduroGP World Championship which is still months away. But the Honda RedMoto squad of Thomas Oldrati, Theo Espinasse and Roni Kytonen took no prisoners in bossing the timing sheets at the opening rounds of the 2021 European Enduro Championship this weekend.

Spread across two days at the picturesque village of Castel Di Tora, and on the back of a nulled 2020 season due to the pandemic, 130-plus riders finally were able to line-up in the Turano valley to tackle this opening weekend’s racing.

Thomas Oldrati was in charge, taking a winning margin of 20 seconds ahead of his teammate Theo Espinasse on day one. Both riders are still on the learning curve with Oldrati stepping on to the CRF450RX this season after many years on the 250 while Espinasse continues his adaption to the Honda team after moving from Sherco in the off-season.

Frenchman Espinasse ran his experienced teammate closest on day two, which was shortened to just two laps due to terrible weather, by finishing just two seconds behind.

Third RedMoto rider on Sunday’s podium was former European Champion Roni Kytonen. The Finnish rider was on for third place on day one but a “stupid crash” in the final test meant he lost out by three seconds.

The best of the rest, in fact the actual European Championship contenders (none of the RedMoto squad are eligible for European points) proved to be an Italian affair with Diego Nicoletti taking his Husqvarna to third overall on day one, just six seconds ahead of his compatriot and Junior class winner Enrico Rinaldi.

Rinaldi placed ahead of Krystof Kouble, the rider from the Czech Republic who had been fighting for the overall title until his injury two years ago.

GasGas rider Enrico Rinaldi it is though who takes the European Championship points lead away from this opening weekend after posting the win (fourth overall) on day two. Day one winner Diego Nicoletti could only manage P9 on day two and leaves his home round tied on points with Maurizio Micheluz, in second place.

Reigning champion in the 250 two-stroke class, and EnduroGP track inspector, Micheluz turned on the style on home soil taking the class victory across both days with third place in European points and sixth overall.

Justine Martel won the women’s class on both days finishing without time penalty points and sits ahead of Hevig Malm and Nieve Holmes in the points. 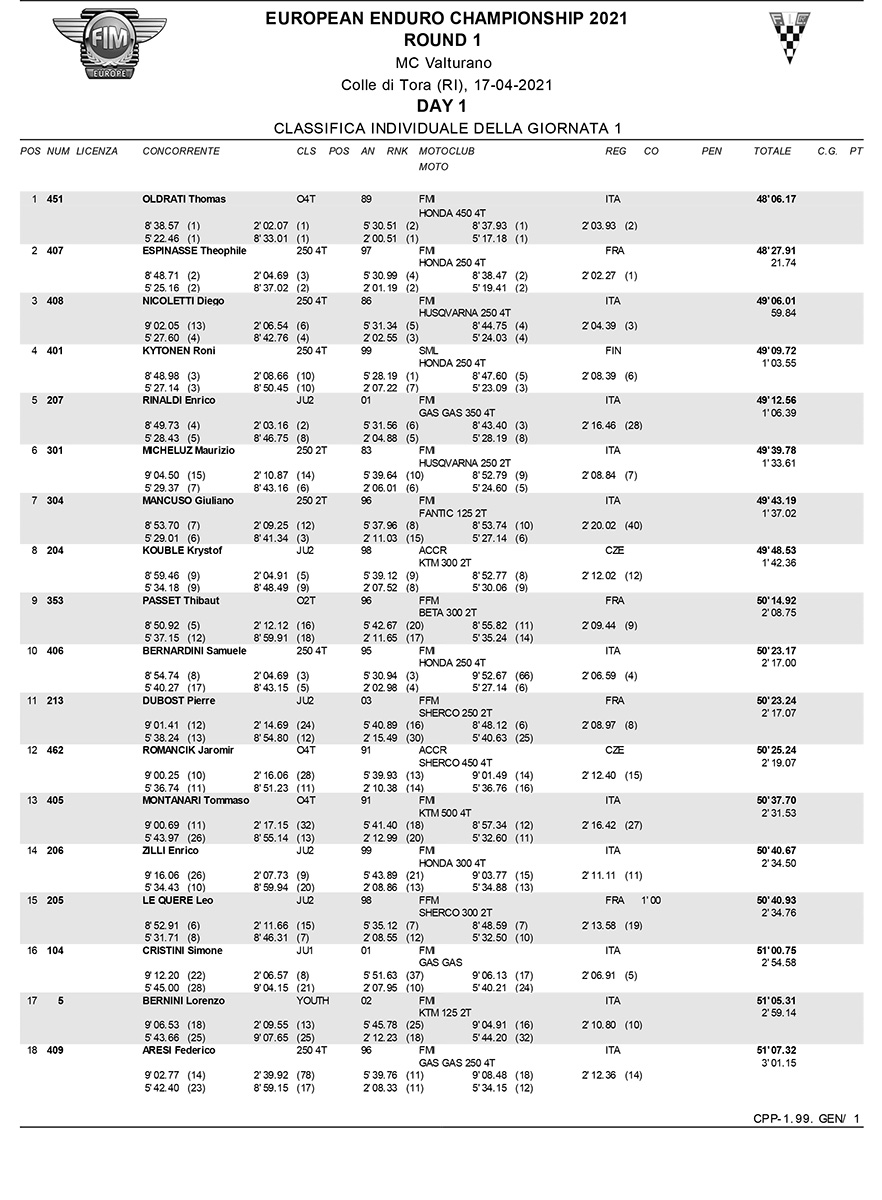 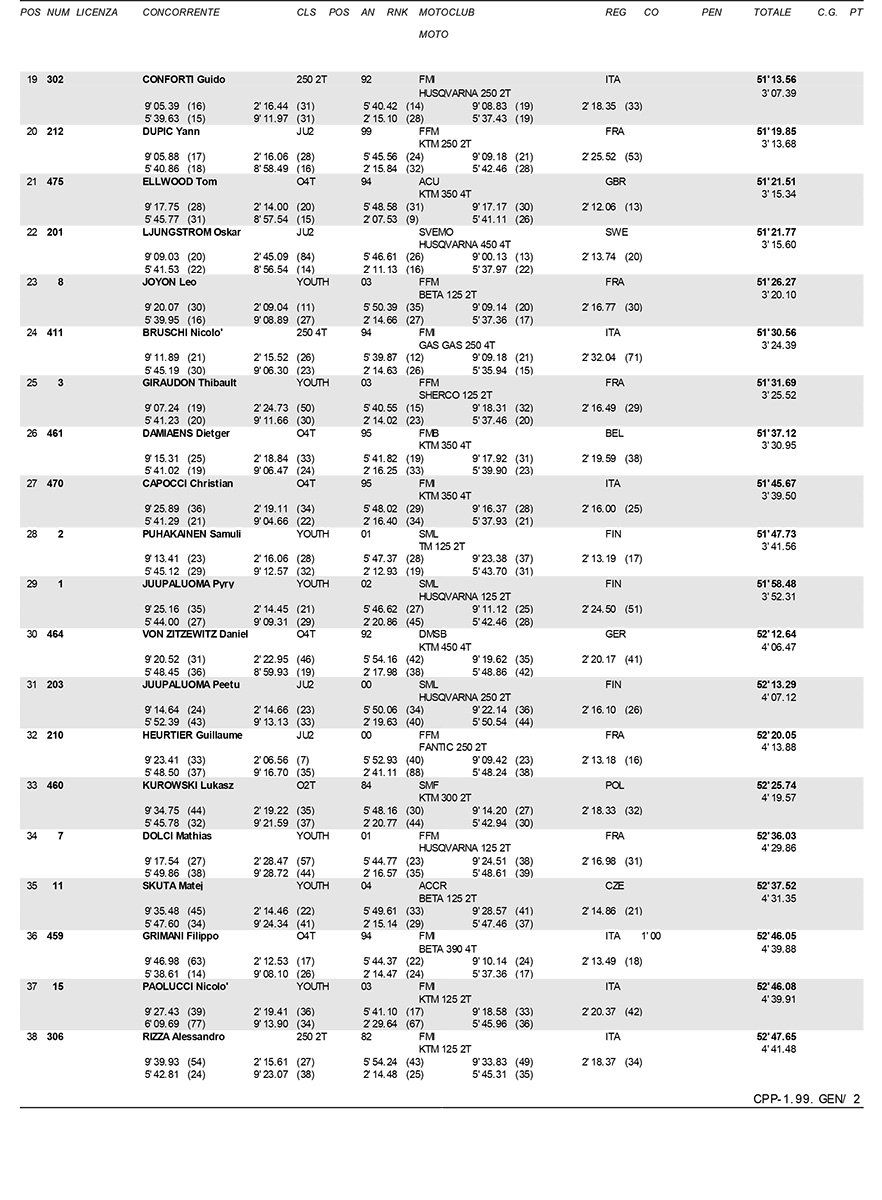 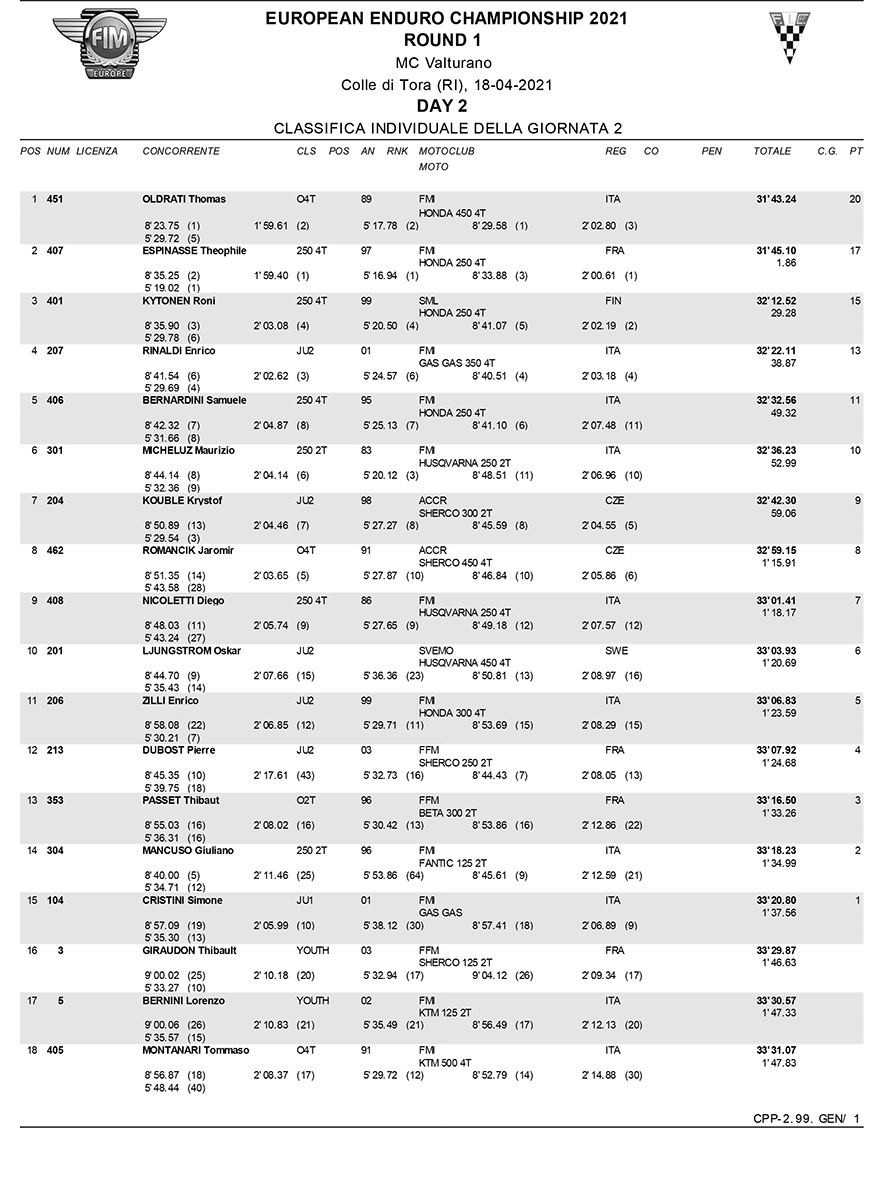 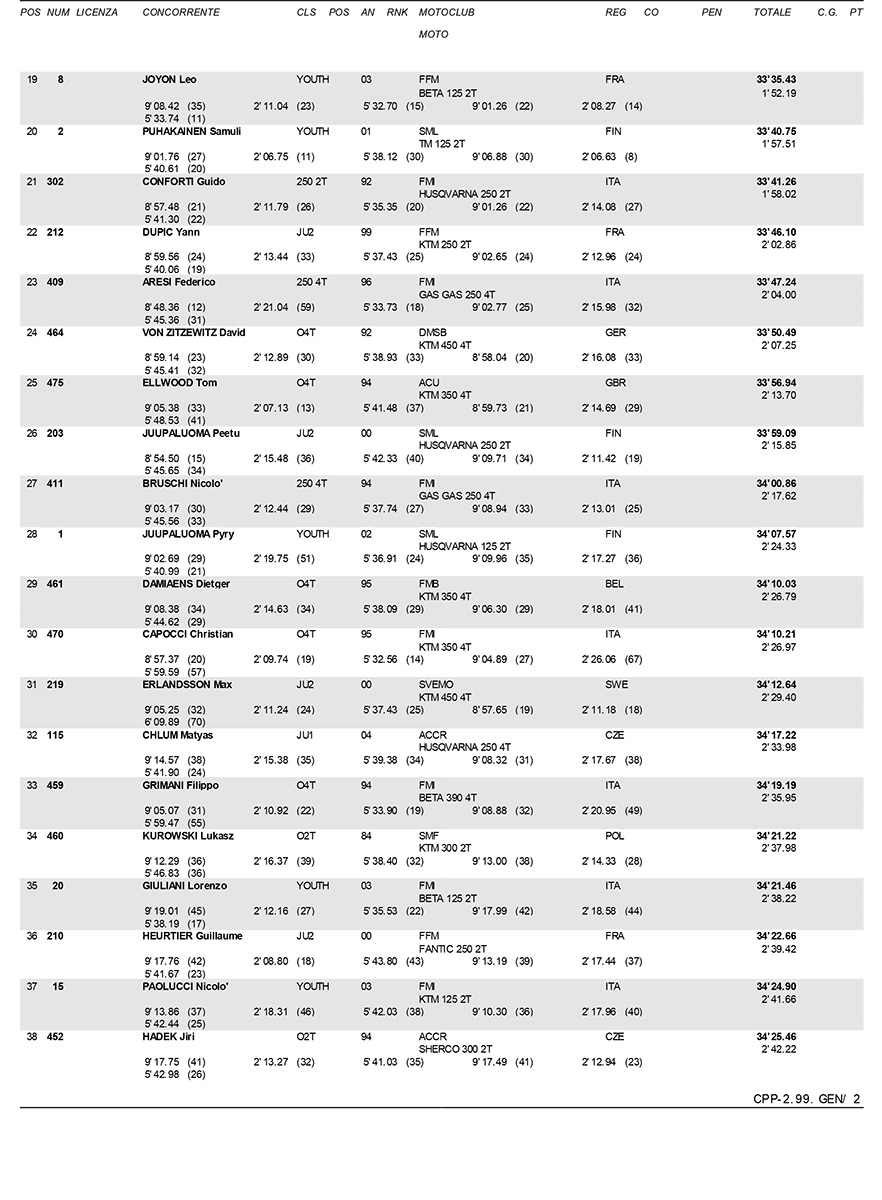 The next rounds of the European Enduro Championship is on August 7-8 in the Czech Republic.