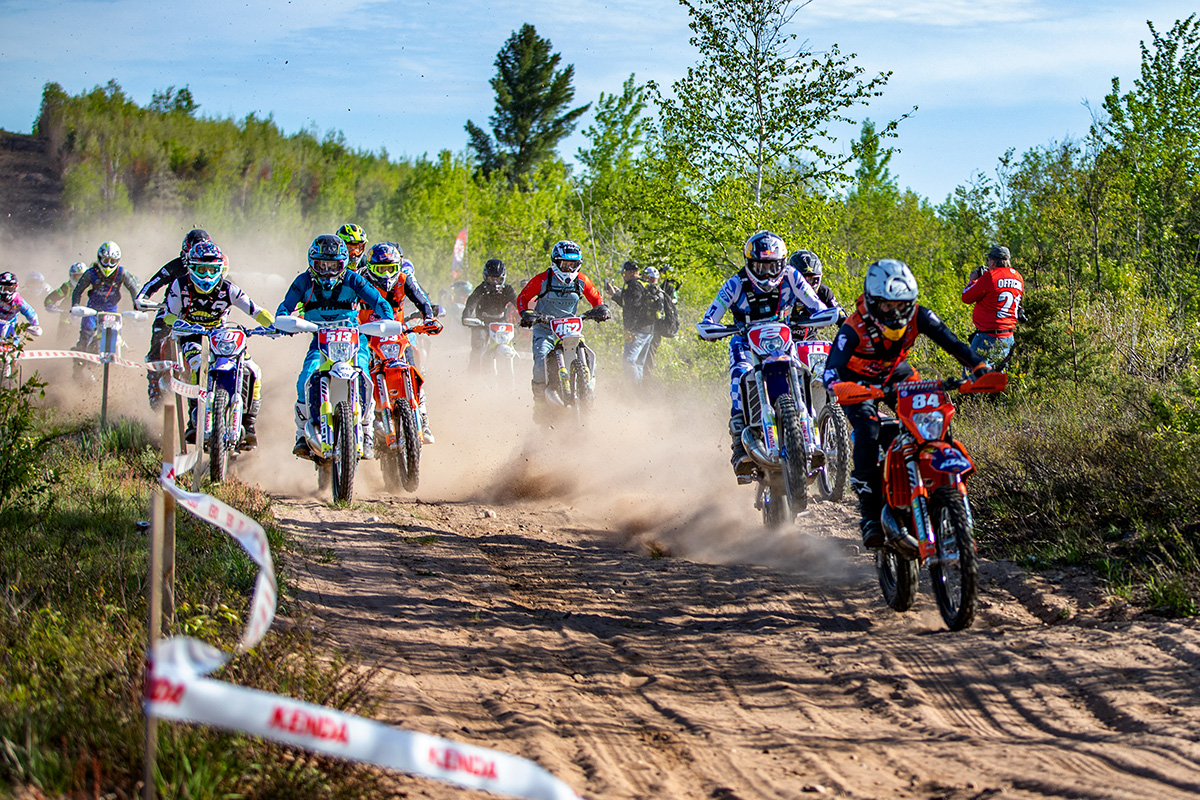 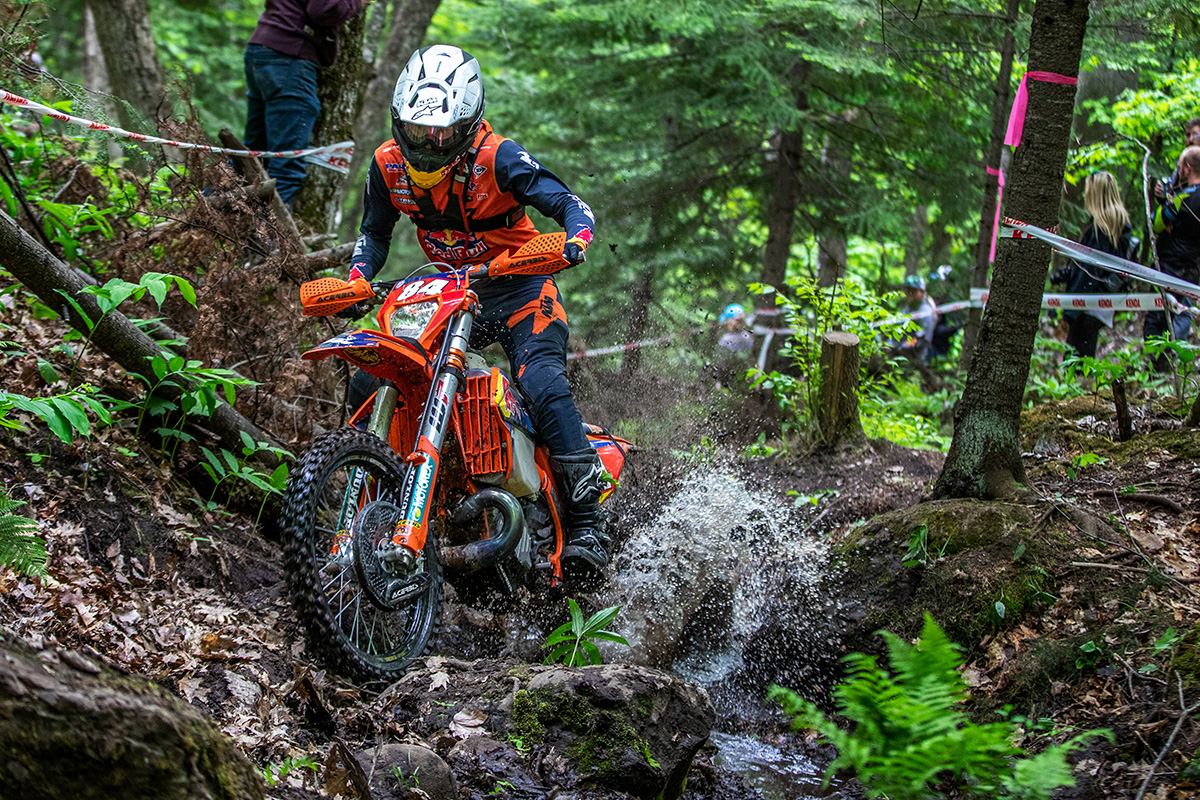 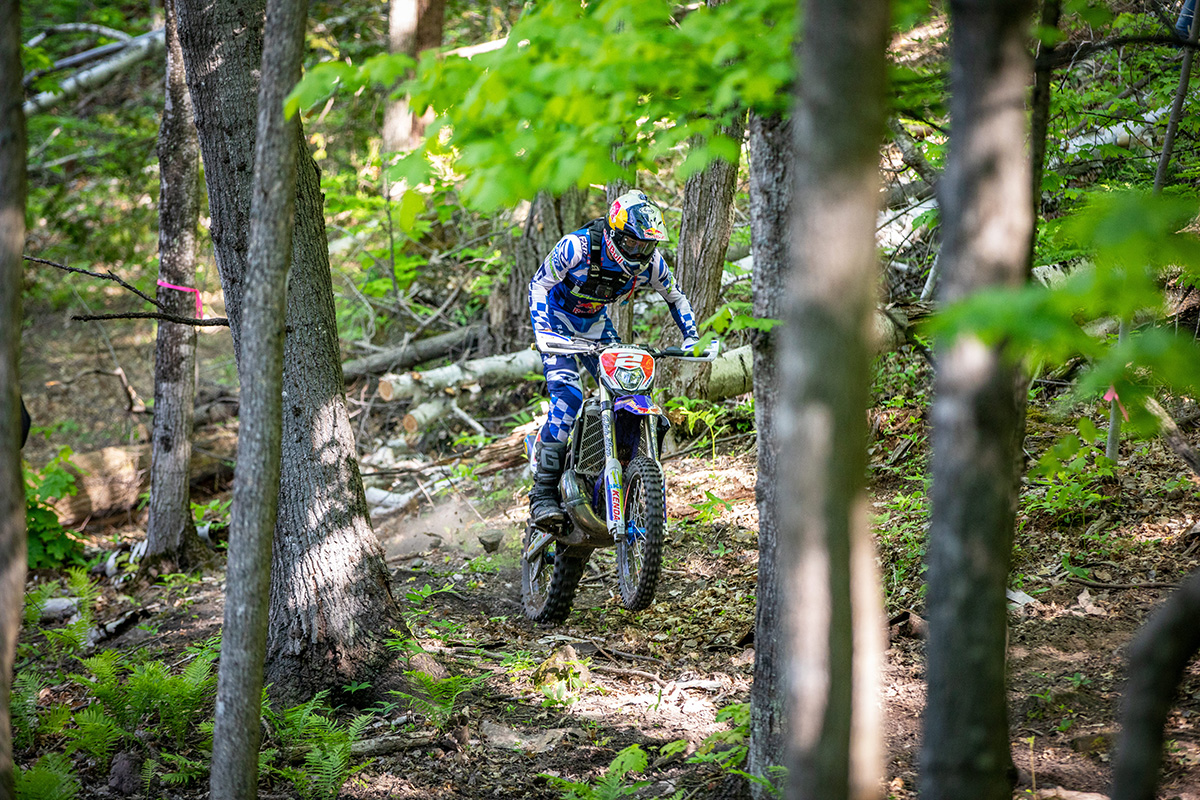 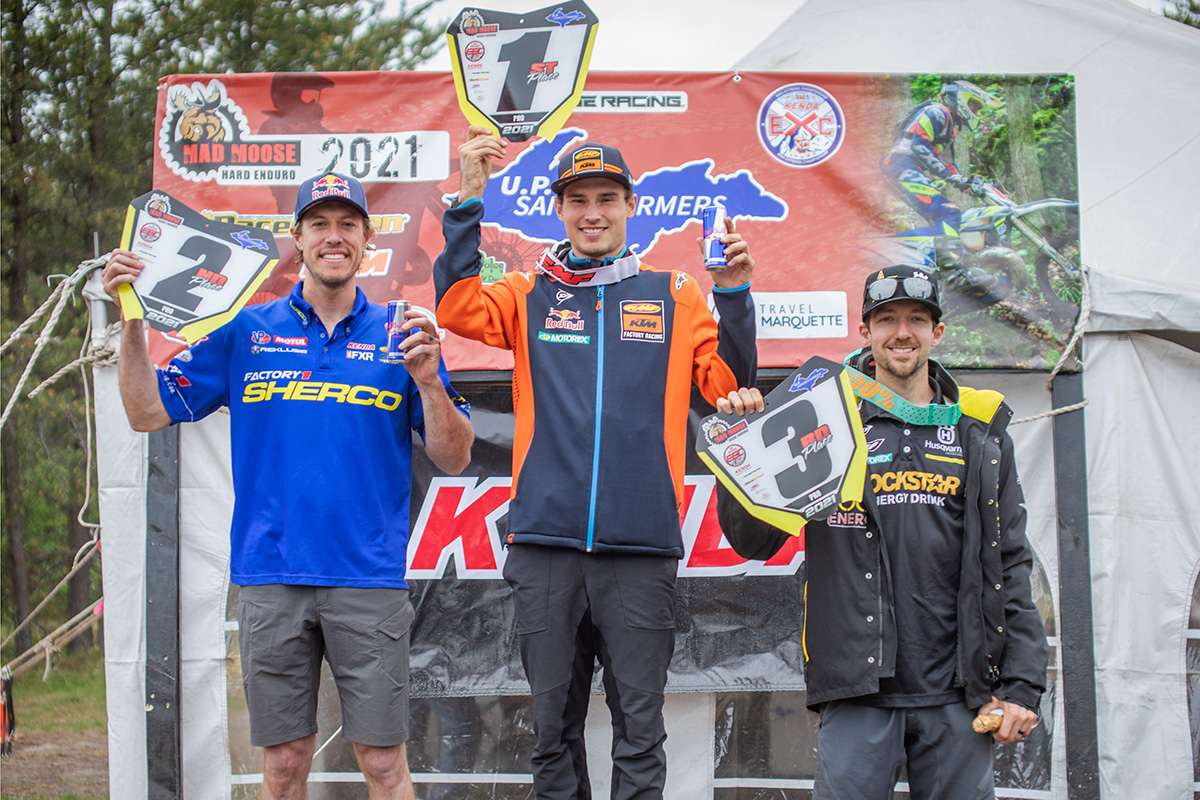 Trystan Hart and Cody Webb continue to trade wins in the 2021 AMA Extreme Enduro Championship – FMF KTM’s Hart took his turn on the top step with victory at the Mad Moose Hard Enduro, round three of the East series in Michigan.

The head-to-head battle between Trystan Hart and FactoryONE Sherco USA’s Cody Webb in the AMA Extreme Enduro season is proving a hot one. With five rounds down (and five to go) the pair have traded wins at each of the East and West Extreme races.

Across the three-motos at the Mad Moose it was very much the same story with Hart in charge of moto one and finishing over one minute clear of Webb.

The following two races were much closer and in fact moto two saw the top six all within 2:30 of each other. Webb was the winner this time, just 10 seconds ahead of Hart.

Race three was a winner-takes-all decisive moto and the fastest pair did not disappoint with a battle to the flag. Hart led the way and ultimately withheld the pressure from Webb to finish 10 seconds clear.

With a 1-2-1 scorecard Trystan took the victory and leads the points (in the East Extreme series). “It was an amazing day,” said Hart. “I won the first moto and Cody won the second moto so it was do or die heading into the final moto. Cody pressured me the whole moto but ultimately I withstood it and secured the win.”

Heading up to Michegan for the Mad Moose, Cody Webb was hoping for wetter conditions like 2020 to gain the edge over his rival. This year’s track proved faster and meant Cody was less able to use those trials skills to his advantage.

“I was really looking forward to the Mad Moose this year,” Said Cody. “Conditions were super dry, making for a much easier race than the year prior…the pace was high turning the race into a big sprint.

“I did the best I could winning the second moto, but in moto one I think he hit a really good line that I missed, and I lost a bunch of time in one section and I never could get him back again.” 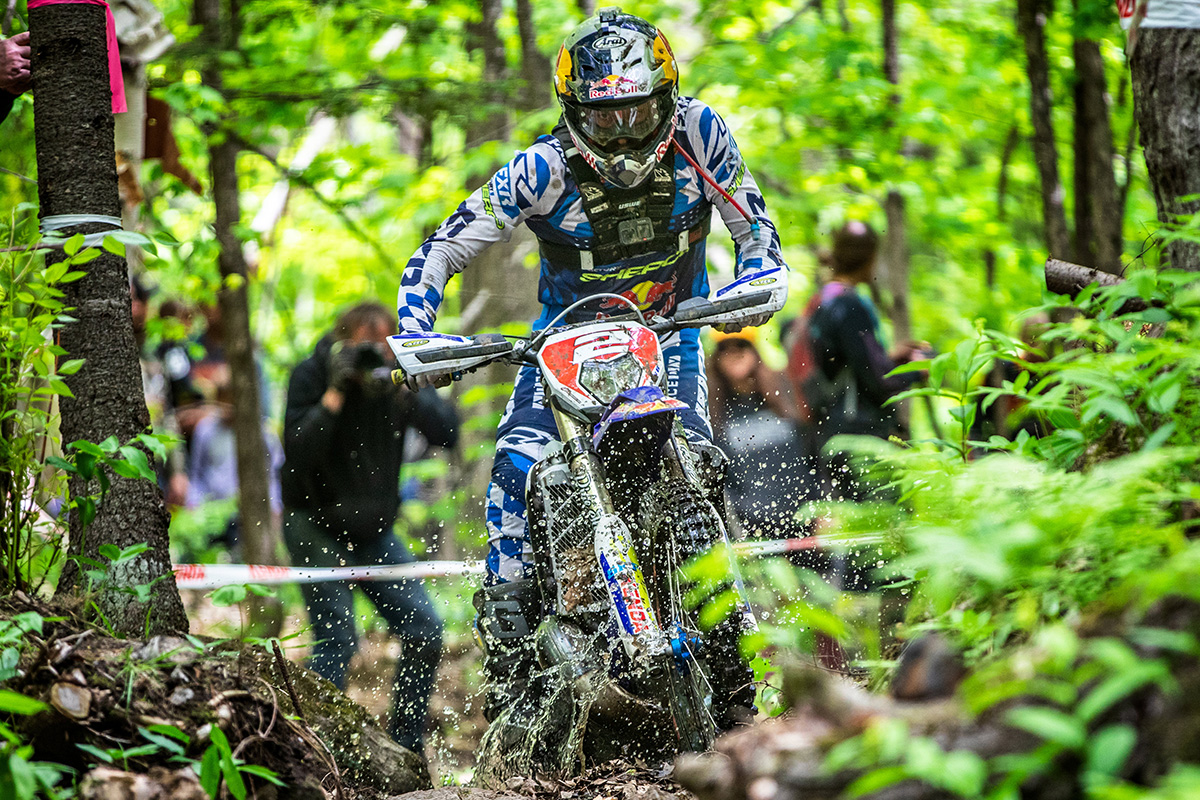 “I knew I had to win the final moto but I put myself in terrible contention right off the bat with a bad start. I pushed the front right when I caught him [Trystan] and I fell back to third and had to battle with Ryder LeBlond.

“Finally I was able to get around him and back into second but I lost too much ground. I did all I could and caught Trystan in the end, but just ran out of track.”

In third place on the AMA Extreme podium once again was Rockstar Husqvarna’s Colton Haaker who says he is taking the positives but ultimately is not happy with another third place after getting the better of Ryder LeBlond for that final podiuym spot.

“First race I laid it over in the fourth turn but came back to a third-place finish.” Colton said. “Second moto got a good start and into the lead for about half the moto, got passed by Cody but kept him honest till the end where I got hung up in a tree and passed by Trystan finishing third again.

“Last moto: decent start but didn’t make good moves off the bat. Still pushed hard to get into striking distance of third until I ran out of time. Not my best day but always taking positives! On a side note I successfully dodged about 12,999,997 trees out of 13,000,000.”

On the Women’s side, Louise Forsley again took the top spot ahead of Factory Beta’s Rachel Gutish. Across the three motos, the smallest gap to Gutish was over 16 minutes.

As the only female to finish the final moto in the time allotted, Louise claimed a top 25 finish and is proving to be a force not just in the Pro Women’s class but in the overall results. 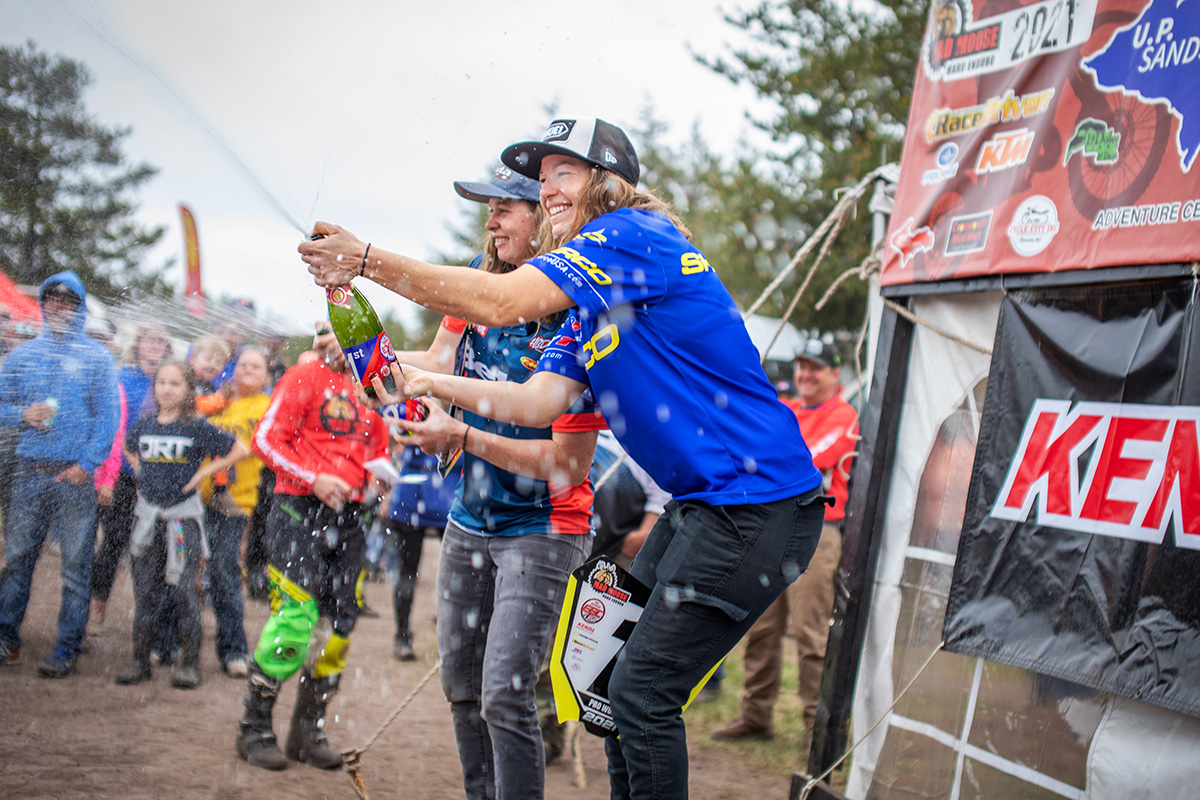 “Moto one started off a little rough I felt tight and was making lots of mistakes at the beginning.” Explained Forsley. “Rachel even took off for a bit and I lost touch, I just tried to slow down and keep forward momentum. Luckily, I was able to make a pass and then gain some ground.

“Moto two went much better. I stayed patient and made sure I got through everything and finally I pulled away.

“I was definitely a little tired going into moto three and knew it was going to be a harder one. But I stuck to my plan of just making sure I rode smart and got through everything. Overall, I was really happy with the day!”