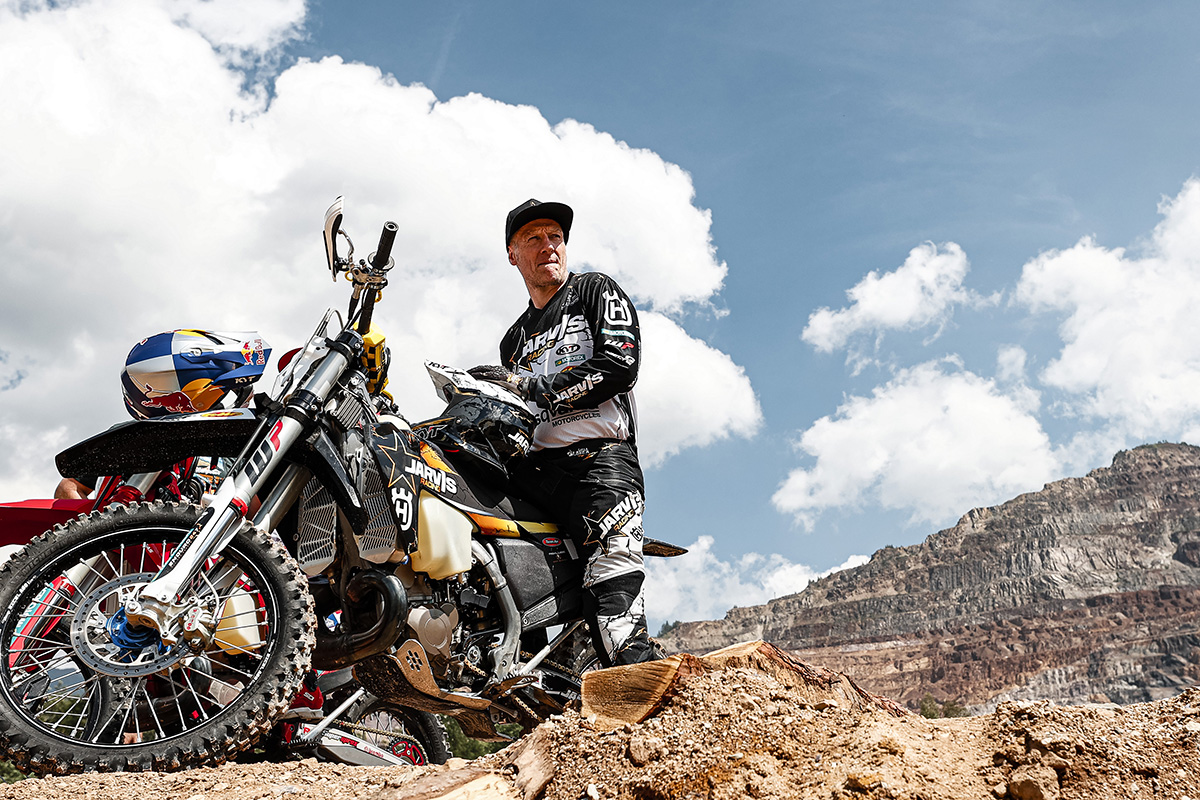 A fuel connector problem which cost an hour, a mammoth 500th to 10th place comeback followed by an exclusion for outside assistance – Graham Jarvis’s 2022 Erzbergrodeo was the stuff of legend for the wrong reasons.

Sometimes it is the simplest things right? The fuel connector not quite clipped into place was all it took for the five-times winner of Erzbergrodeo to lose any chance of taking home a sixth lump of rock.

He was hoping for more of that podium pie but in the heat of the moment, Jarvis Racing Team Manager Grant Churchward had lent a hand to his main man and the organisers declared that worthy of disqualification. The Erzberg rules say you’re not allowed outside assistance.

Though Mani Lettenbichler has come back from his own major injury with an unreal level of fitness and has subsequently won two HEWC rounds, the question many Jarvis fans are asking is what if he’d been able to deploy the ‘silent assassin’ techniques from the front instead of dead last?

With the dust settled, Enduro21 catches up with Graham to find out what actually happened at his 2022 Erzbergrodeo…

“Basically the petrol connector came off.” Jarvis explains. “It wasn’t connected properly and it came off up the first hill leaving me with a bike which was dry and wouldn’t run.

“I was checking everything, electrical connectors, the plug, seeing if water had got in there, everything I could think of. But because this had never happened to me before I just didn’t think to check the fuel connector and I was pissing about for an hour.”

As Graham and his team will now know (who needs hindsight) this is not unheard of and is so easily done when you refit the fuel tank. That little plug-in connector down the left side of the tank must audibly ‘click’ when recoupled. But in a busy paddock…well, they weren’t the first and they won’t be the last to find this simple problem.

The one hour-plus it took for them to find the problem left Graham with a literal mountain to climb, a mountain covered in bikes and bodies as 500 riders. “By the time we found it I was 10 minutes behind the last row leaving the start. Dead last.” Graham continues.

How the hell did he get through so many people? “Just by picking my lines and riding like normal really. I had to wait sometimes, where there were queues and just a single line on some sections in the trees. Other times I could find a way through but I had to choose my moment.

“By the time I got to the Diner I was in the top 30 I think, and I passed about 10 riders there. I just kept picking them off really.” If you ever needed an illustration though of the difference between the best in the world and rest of us, then Graham’s fight from dead last is it.

Jarvis’ race ended because he ran out of time trying to get up a by the now infamous new section in the trees, Motorex Highway. Graham thinks the Highway would have been easier earlier on for his rivals as subsequent riders made it harder with each attempt.

“By the time I got there the ledge had gone which I think other riders had been getting onto. It was impossible. Will [Hoare] had been there a while and I think he’d had so many attempts he’d knocked the ledge away. It was loose and there was nothing to get onto to make the turn.

“Anyway, it didn’t matter because half an hour later they disqualified me.”

Graham scored zero points at this third HEWC round when it is likely he could have been going home with six points for 10th place. “It’s not many points and things are still close, but this is a world championship and those six points are actually a lot. It could matter at the end of the year because world championships get won and lost by less than that.”

What about the organisers implementing the exclusion and going by the rules, even though he was so far behind?

“It’s fair enough,” says Graham straight up. “Grant helped and touched my bike and that’s a rule. But if there are rules for me then there are other rules which should count for other riders.”

Not wanting to say too much more, Graham left it there but reading between the lines and speaking with other riders we can see there were varying degrees to which some rules were enforced, for example having helpers on the course, and it is easy to see why the Jarvis team at least feel hard done by. 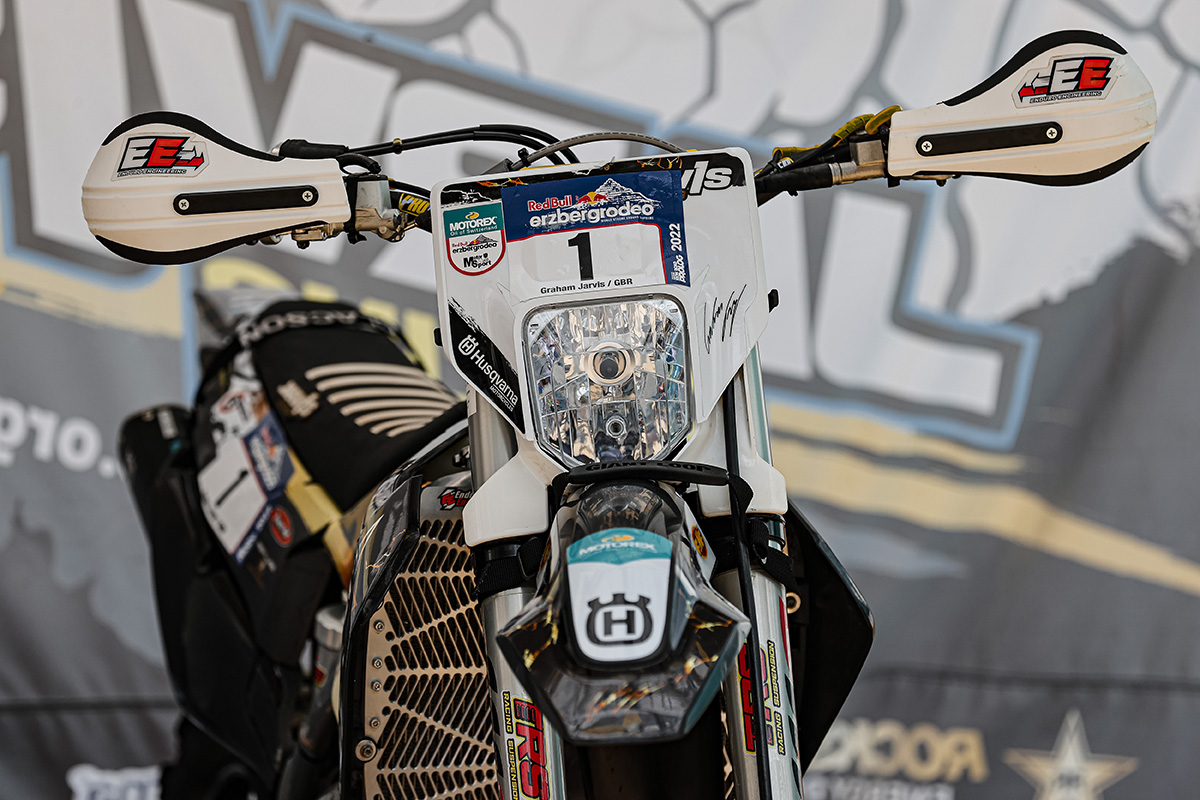 The ball keeps rolling and the next round of the series is just a couple of weeks away at the Abestone Hard Enduro in Italy.

Graham is otherwise upbeat about the way he was riding at Erzberg and his role as privateer running his own team. “I try to be positive about it and look at how well I was riding. I’m still not 100% and this was only my third race back from injury. It will take time to be on top form again but we’re getting there.

“In terms of running the team, everything is improving all the time too. We are getting there with the set-up of the bikes and we’re on the right track, it’s good to have some good people onboard.

“We have young supported riders in the team but for anyone wanting to ride our bikes at the Hard Enduro World Championship races we have that opportunity too. We have the bikes available and we can give the full factory treatment for any rider at a race weekend.”