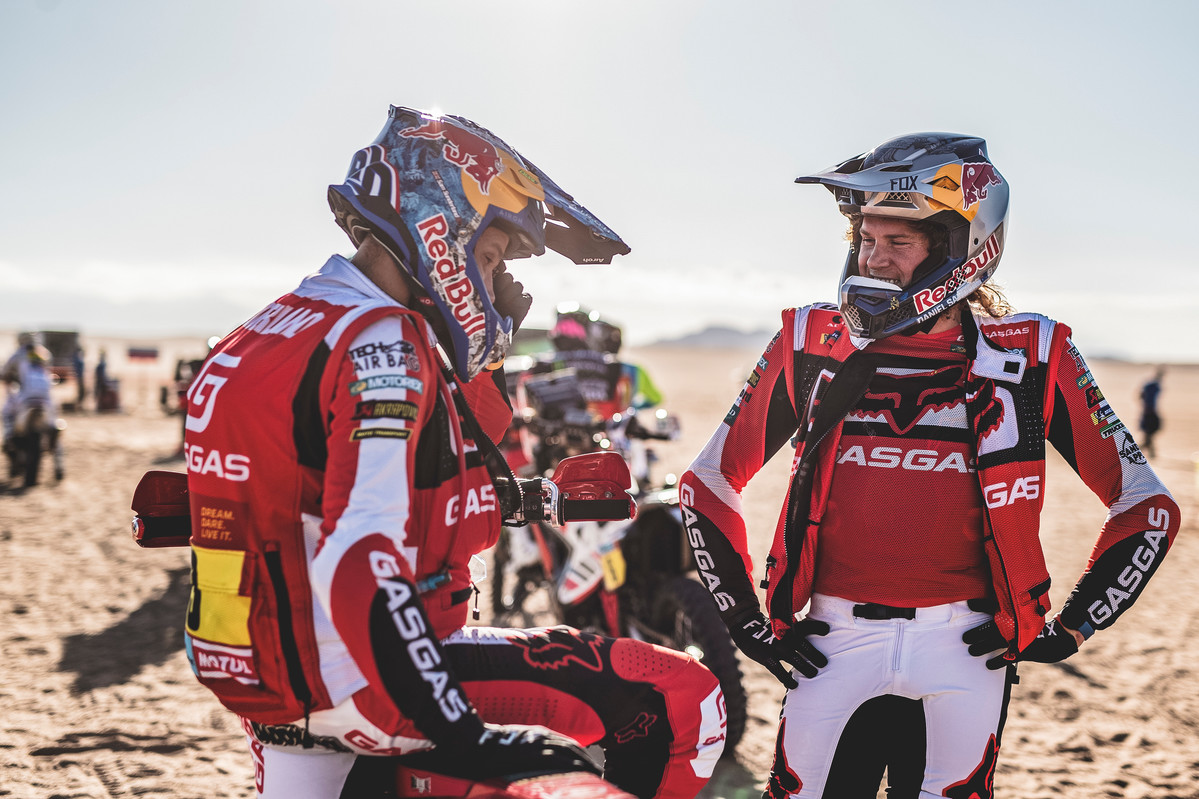 2022 Dakar Rally Notebook: stage six – should they have cancelled it?

Enduro21’s daily Dakar Rally notebook keeps it short on day six after the organisers did the same and cut the final stage before rest day short as well, but did they need to?

Stage six of the 2022 Dakar Rally was cut 300 kilometres short on the grounds of safety. The organisers flipped the bikes onto the same course the cars, SSVs and trucks had raced on stage five and the four-wheelers savaged some of the stage, making it difficult in places, “dangerous” in others.

A lot of riders will be happy with an extra half a day on top of the rest day tomorrow, avoiding the tough riding conditions for another three quarters of a stage eases the pain of any injuries, removes risk and gets them to the end of week one in one piece.

Dakar roadbooks are written in advance and the piste riders faced was “unbelievably different” to the notes, especially early on after a couple of kilometres where Ross Branch was among the people crashing badly. So safety first, that was the general consensus at the end of today.

But it mugged a few riders who were happy with the tougher terrain and who think the Dakar should have hard days like this. Some pointed out the throttle goes both ways and in off-road sport, you should be riding to the conditions. It ruined a few strategic game plans as well.

Like everything in life there are two sides to a coin, here’s the case for the defence and for the prosecution…

The case for the prosectution, your honour:

Joan Pedrero, Rieju FN Speed Team: “The track was destroyed, but that's how the Dakar is. It's not all about racing at full throttle and going flat out. It's clear that safety comes first, but we're used to going out very fast and the Dakar isn't like that. There are days when things like that happen and you have to take advantage of it. You slow down, you adapt and that's it. I don't think they should have shortened the stage.” 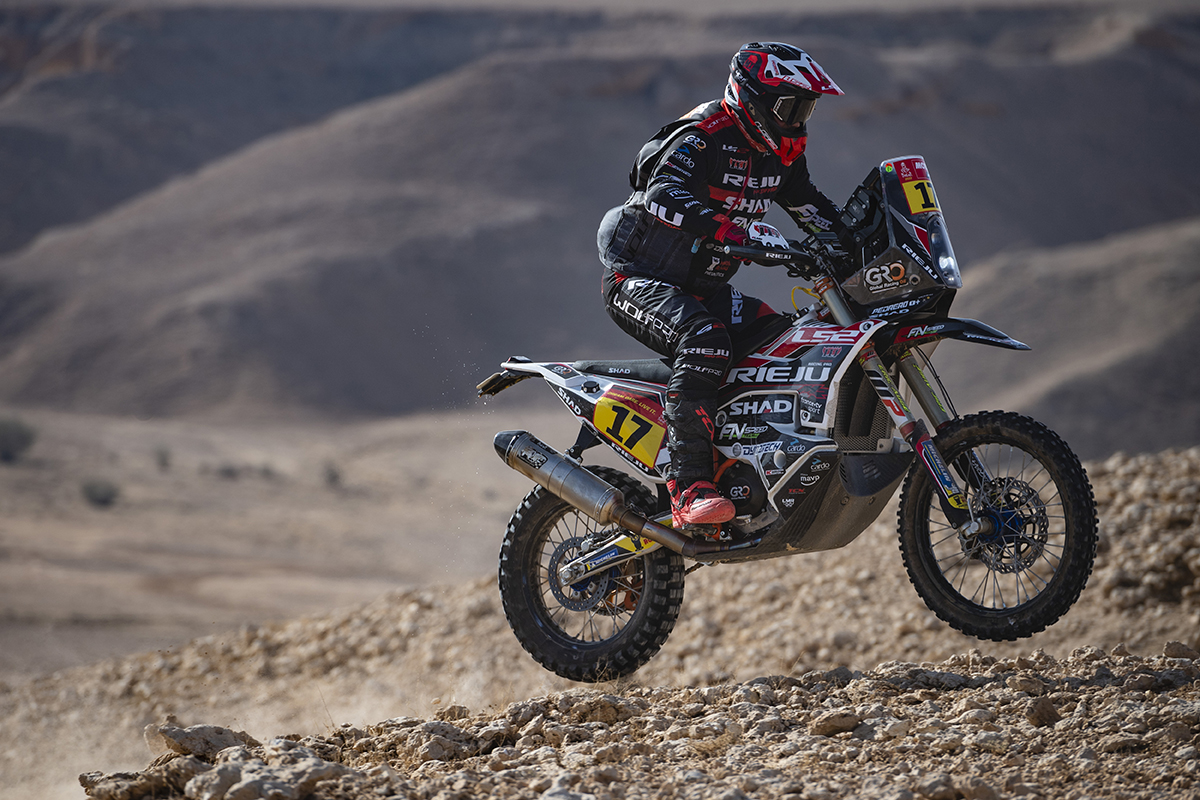 Daniel Sanders, GASGAS Factory Racing: “The track was already worn in, and we could see where we were going. There was a lot of open dirt and ground, so it was really easy to navigate. We got to the refuelling and a lot of riders complained about how rough it was and saying how dangerous it was with the rocks and stuff.

“For me, it was pretty easy and basic and I just rode at my own rhythm and was really comfortable with the terrain and the situation. For me, there was no problem with the terrain.

“We’ve done many races like this and Morocco was the same. Unfortunately, a lot of riders complained. They rang the officials and complained and then they called it.

“The riders knew what we were in for. We knew at the start of the day that it was going to be crazy. Unfortunately, some people got the upper hand on the situation and I got the short end of the stick. I was a little bit disappointed with the decision.”

The case for the defence, your honour:

Adrien Van Beveren, Monster Energy Yamaha: “I’m lucky to finish this special in one piece because it was really dangerous. The roadbook is written in such a way as to indicate the dangers on the route, but the route had completely disappeared, it was 300 metres wide after the cars and trucks drove on it yesterday. The dangers indicated aren’t sometimes there because you are 100 metres to one side or the other.”

Photographers at the Dakar get posted to particular points as a rule and the images coming out of today don’t do justice to the “completely destroyed” terrain. Half metre high rock steps in the middle of the track you’re not warned of are a big danger when you’re used to having those things noted on the roadbook.

Here’s Kevin Benavides in the desert this morning…it wasn’t this easy all stage! 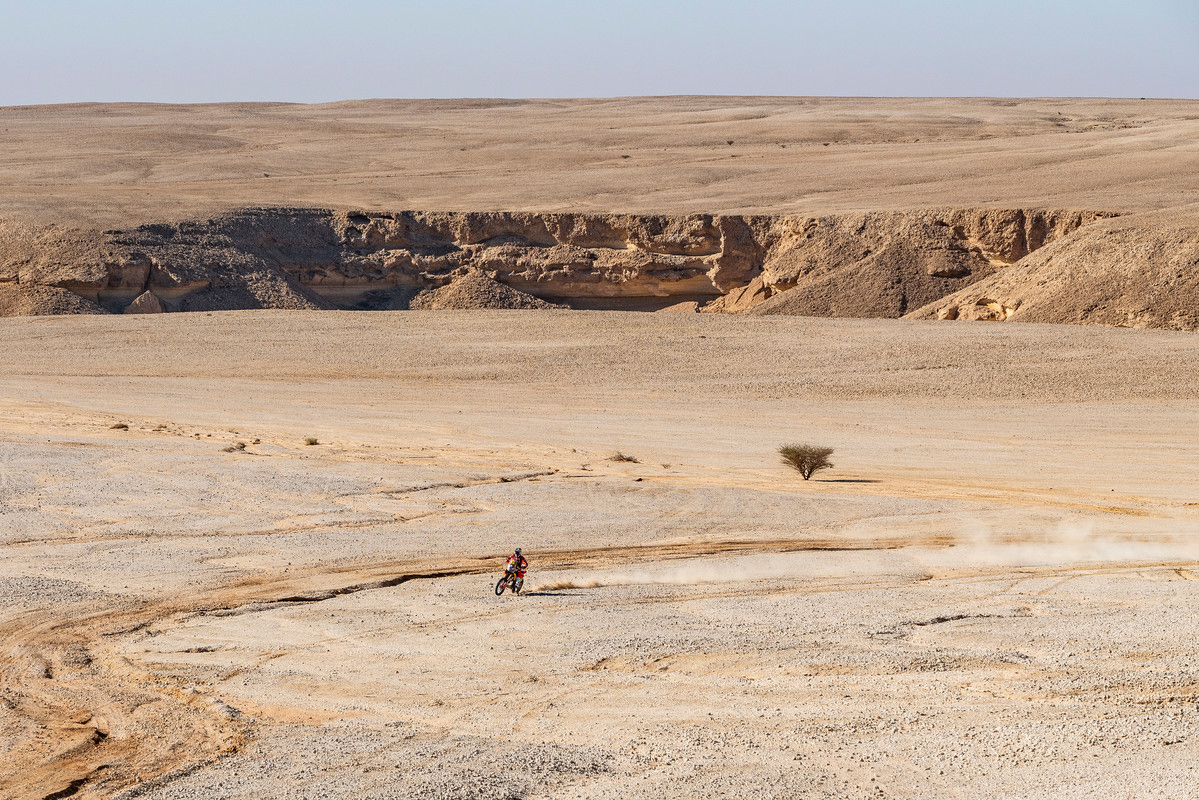 This video of Mohammed Balooshi getting back on the move after a crash, like quite a few riders, shows what was happening in the first kilometres of the stage. When the bikes are full of fuel they are quick to bite.

🏍 It's all about solidarity when you're on a bike. 🛠#Dakar2022 pic.twitter.com/ubVn5XsaUv

The idea that one rest day is enough to recover from the wounds of a high-speed crashes seems daft but the halfway goal of the rest day tomorrow is an important milestone.

For the mind and body, taking it one step at a time and aiming at the next achievable goal is the stuff sports psychologist will tell you works. Concentrate on the near and let the far come to you.

Like half time in a football match, a break at the end of a tennis set or indeed the mid-race draw of breath at the Dakar, the rest day is time to pause and reset.

Add in the immense bike time the riders put in across this 12 days of racing, especially the privateers who are clocking up so many extra hours on the pegs each day, and you can understand why everyone is relieved to arrive at day seven.

Winning a stage yesterday was a huge high for Danilo Petrucci (and KTM this Dakar so far) but the cold dawn today gave the Italian a wake-up call. Winning a stage means leading everyone away the next morning, another first for the former MotoGP rider.

If it was remarkable he won yesterday then it is a stark reality to be first on the track, navigating without reference and arriving at everything, all the dangers in the piste, first. Plus the terrain was a lot more enduro today and lot less flat stick.

Like too many people, Danilo crashed just three kilometres into the stage, hurting his elbow (but not badly, this guy is used to hitting the ground hard and fast from his previous career). He was quickly back underway but got engulfed by the chasing pack.

Leading your maiden stage must be like being that guy who goes like hell on the first lap of an enduro only to hit a tree or get in the way of the fast lads a lap later.

Dakar. It’s not a walk in the park.

Tomorrow, Saturday is the rest day where heads will be scratched about the week just gone and plans will be made for the week ahead.

Sunderland, Walkner, Sanders and Van Beveren will be aiming to maintain their comfort zone built through some smart and fast riding this first week.

Riders behind – notably Quintanilla, Santolino, Svitko, Kevin Benavides and Barreda (possibly, if he is fit) – are within striking distance. A good day or two, or a bad day of navigation, could swing things dramatically for any one of them. 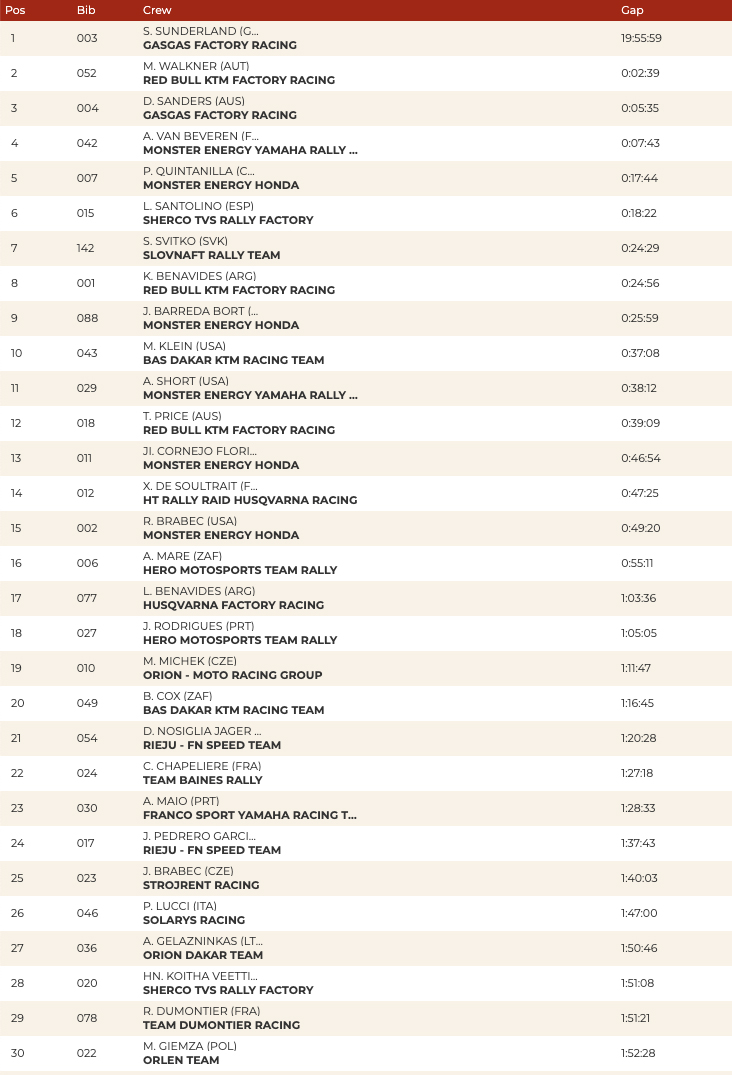