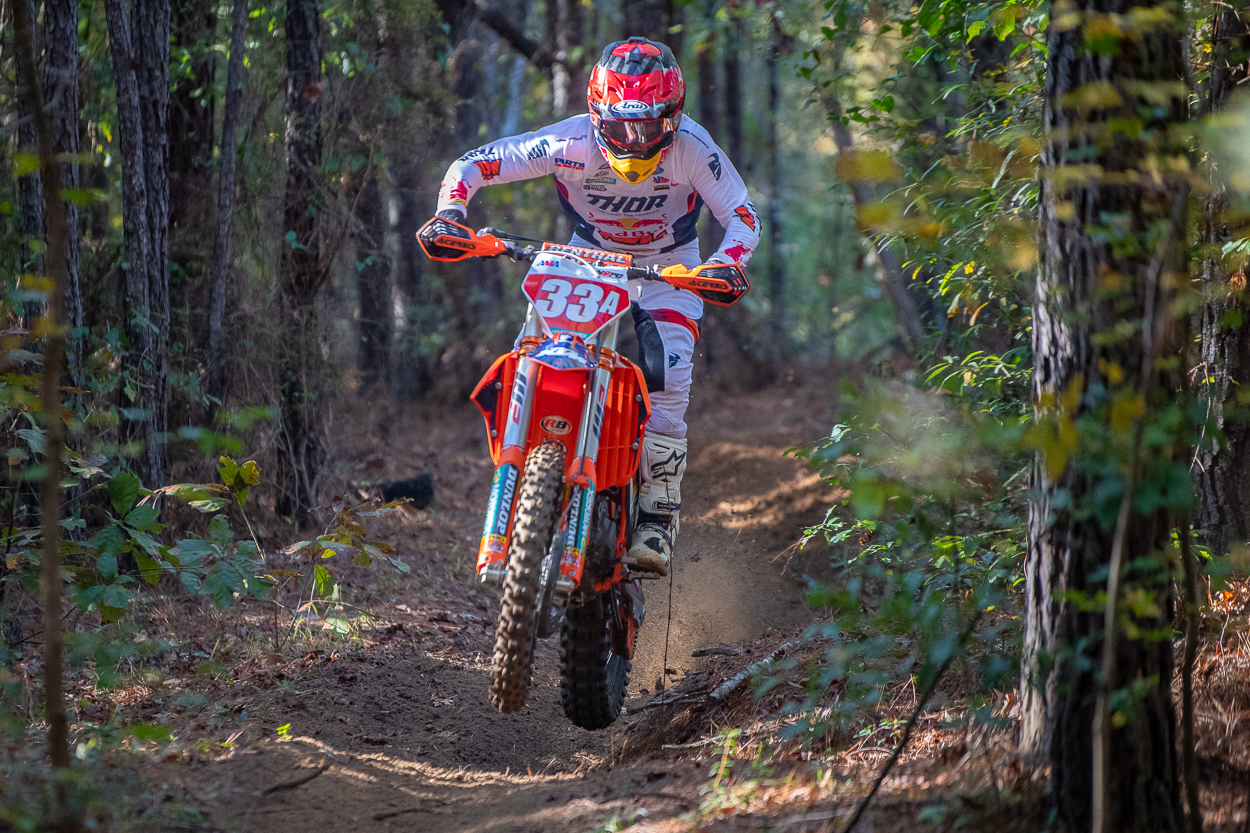 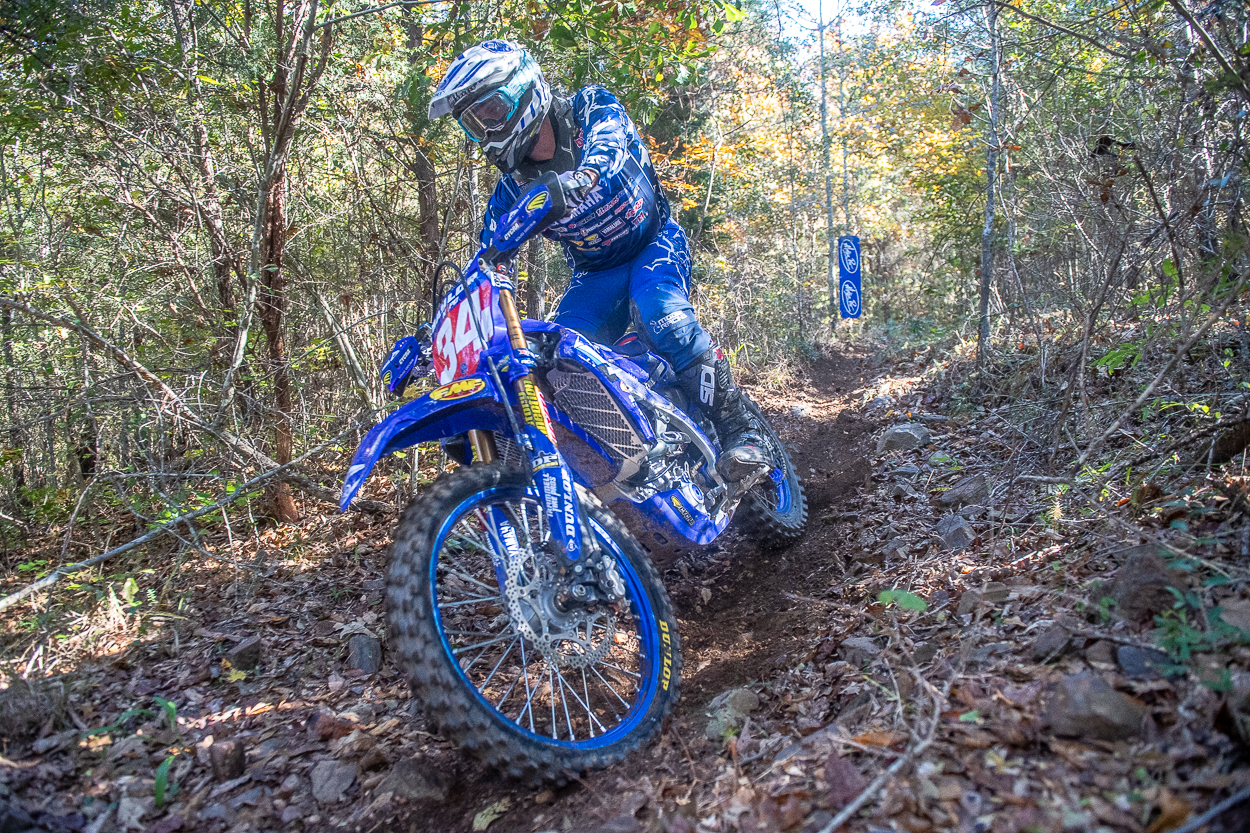 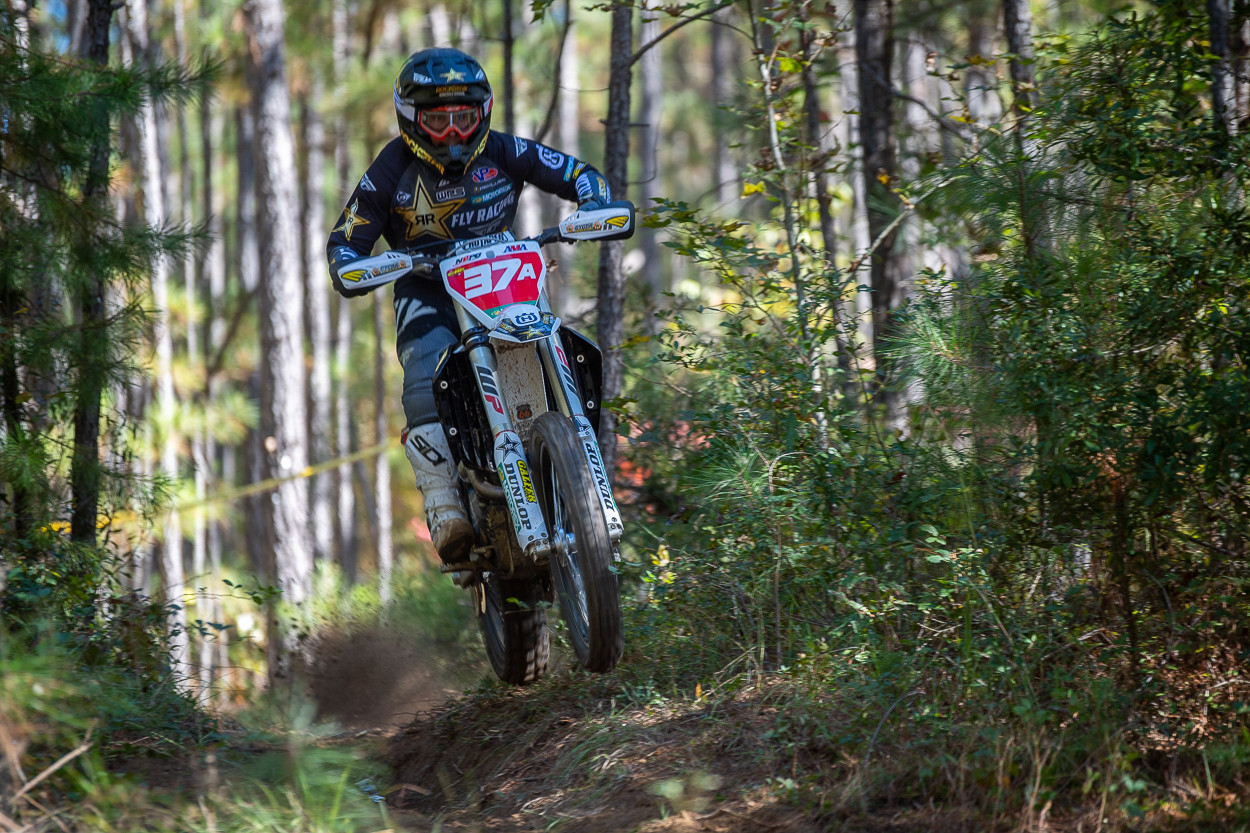 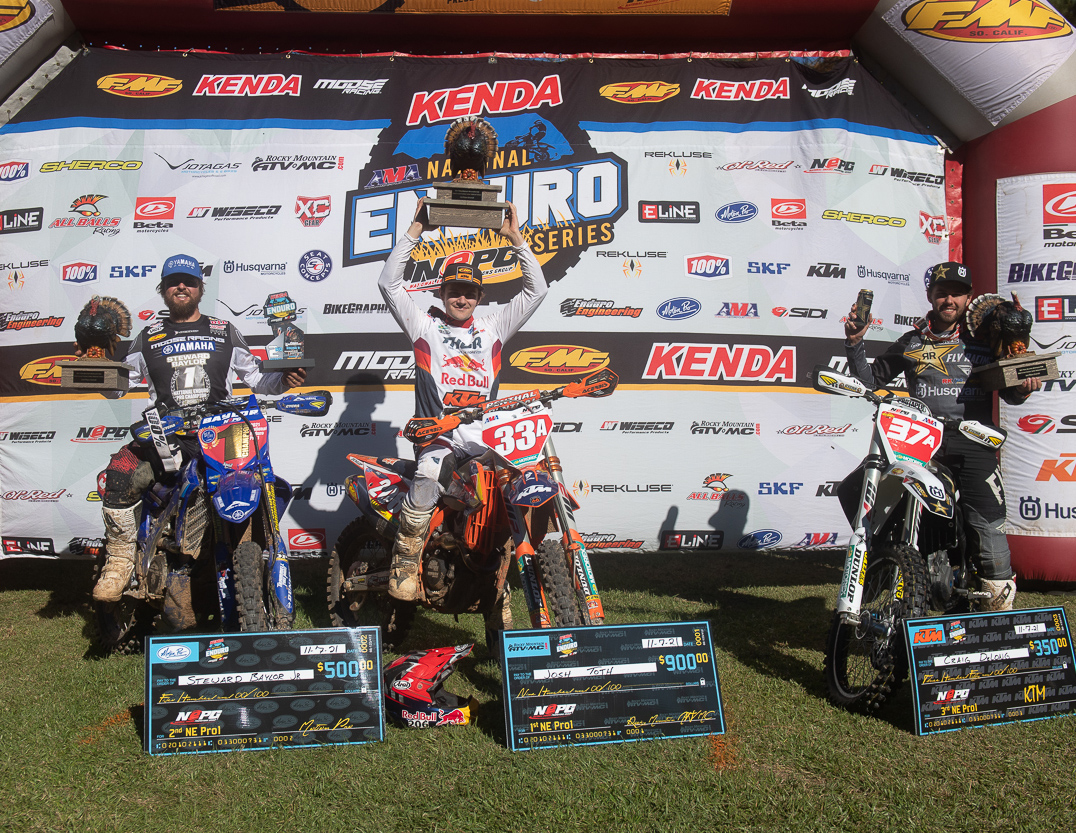 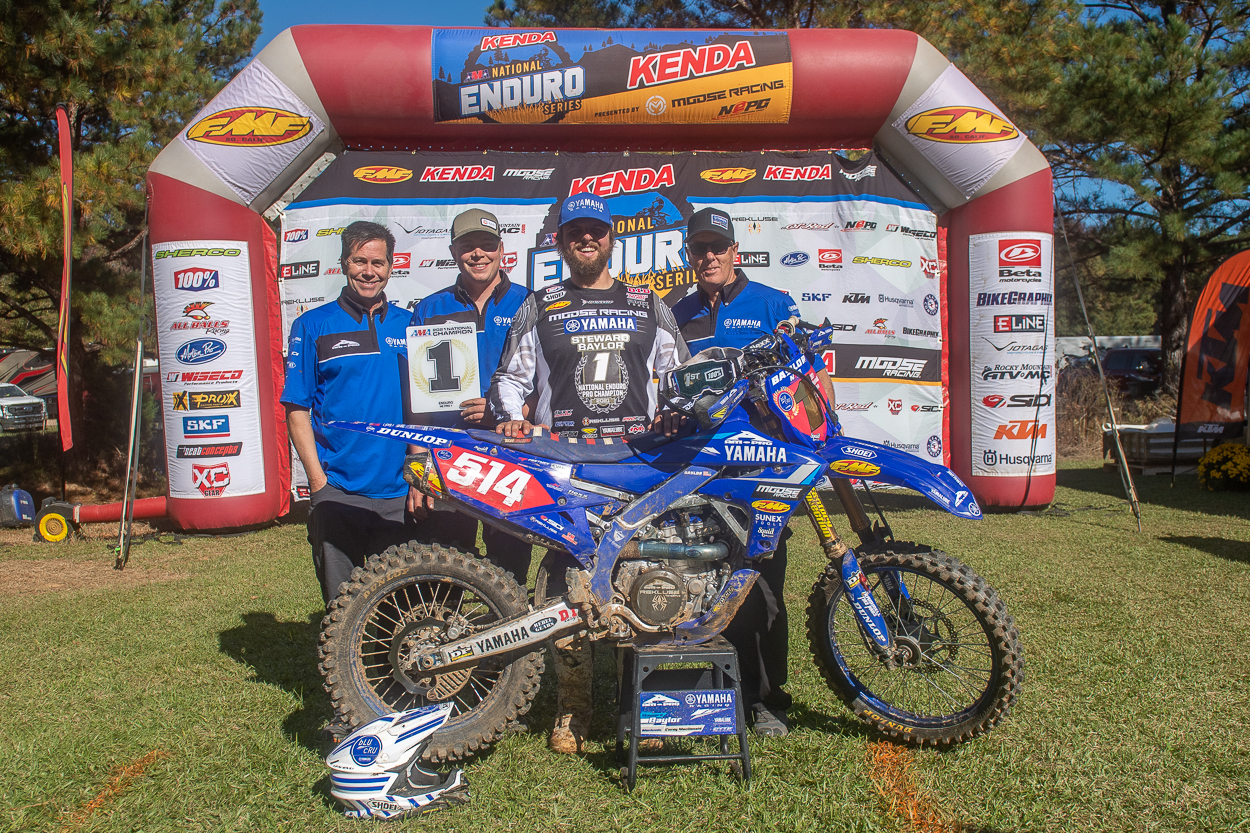 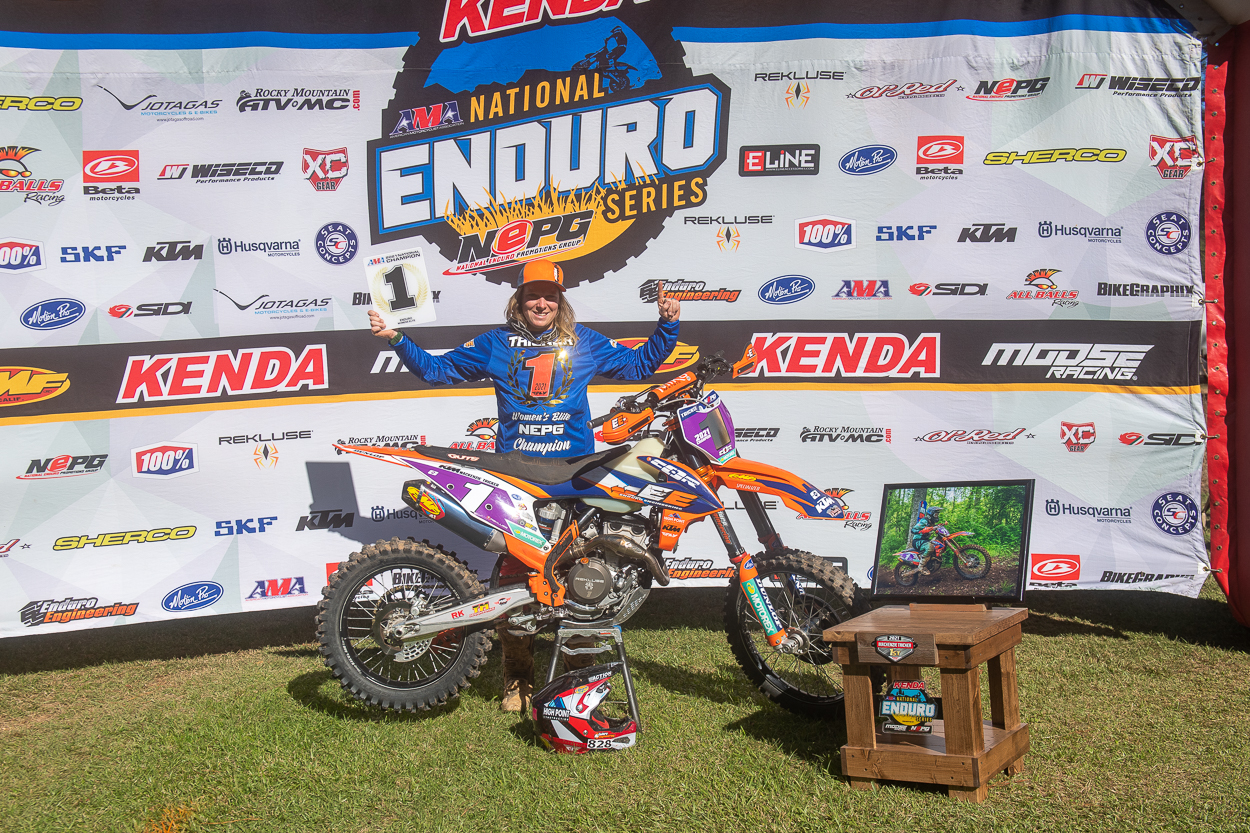 Josh Toth continued his impressive run in the Kenda AMA National Enduro series taking his fifth win of the season at the Gobbler Getter National Enduro in Stanton, Alabama – runner-up spot was enough for Steward Baylor to wrap up the 2021 championship title.

Baylor came into the race with a huge margin in the points and needed only to score a 14th to nail down the title, but the South Carolina rider was on the gas early in the race and going for the win.

However, it was Ryder Lafferty who scored the first test win of the day. The Coastal Racing GASGAS rider tripped the timer a second faster than Toth, with Craig Delong third and Baylor fourth.

Baylor then took tests two and three, but Toth found his groove and topped the final three tests of the day. After six tests and 52 miles of racing, Josh took the win with just over 29 seconds ahead of Steward. “I started off a little bit slow and just kind of a little cautious, but picked up throughout the day,” said Toth. “I knew Stew was pushing and anything could happen, so I was just giving it my best effort and fighting between the lappers and the tight trees.”

“It’s kind of a bummer to be on the top step of the podium but not with the number one plate,” added Toth. “I had a lot of wins this year, but consistency is what matters. I suffered through the first round with a broken hand. If it wasn’t for that or drowning my bike while I was in the lead in Ohio...would have, could have, should have…I can’t change a thing now. I gave it my best. Stew hasn’t beat me in a while, so going into next year I’m pretty confident and I’m coming for that number one.”

Though Steward Baylor started off charging hard at this final round, the ultimate goal was to take the title. Trying too hard can be your downfall and Stew says it took some crashes and even barbed wire in the front wheel whic made him carry a set of side cutters just to be certain!

The errors made him ease-up slightly to keep it safe and ensure the National Enduro title stayed in the Baylor family (that is five for Stew and brother Grant won it last season).

“It’s awesome to wrap up the fifth championship,” said Steward. “Luckily, everything fell into place. The last couple races I really didn’t have to push, just ride well, but never really too aggressive.

“I knew I really needed to be careful, save the bike, not over-ride, not end up on my head. I think all three of the first tests I crashed within the first 10 turns and I was like, ‘what are you doing?’

“At one point I got tangled in barbed wire. When the barbed wire got around my front wheel I was like, well, there it goes. So, after that test, I just cruised.”

Check out the extended post-race interview (video) with Steward in our seperate story: “Over the last decade I’ve been the most consistent” – Steward Baylor, 2021 AMA National Enduro Champion

After switching to Husqvarna’s 350 for the series finale, Craig Delong came away with another season closing podium with third overall.

“All-day there Trevor and Ryder and I were battling together,” said DeLong. “It was a tough day and a true enduro. That last test, halfway through it I was starting to feel it, but I had a lot of fun.

“I wanted to end the year on a good note and I’m happy to be on the podium for the last race. It’s a good winter break at that point.”

Ryder Lafferty, who won the first test, missed the podium by seven seconds, finishing fourth. “Things started off pretty good,” said Lafferty. “I didn’t think I rode well enough to win the test, I just rode smooth and steady and I was looking up and trying to catch some lines and I ended up posting the fastest time. In the middle of the race I fell back into some old habits, but in the last few tests I just started having fun and I was able to finish strong.”

Meanwhile Trevor Bollinger was another rider on a 350 (instead of his usual 450) and the Husqvarna pilot rounded out the top five, just three seconds off of Lafferty.

“I kind of pretty much threw it away the first test,” said Bollinger. “I got arm pump and got tight. I think I lost like 20 seconds to the guys there. The rest of the day, I was inching my way back up. Then I think I was about 10 seconds out of the podium going into the last test. It’s hard when you give them that much of a gap in the beginning. But it was a good day to test the 350. I think I’ll be on it next year.”

FXR Husqvarna’s Evan Smith was consistent on route to sixth overall ahead of the new GNCC champion Ben Kelley who managed seventh place feeling under the weather all weekend. Kelley finished the 2021 season in third overall behind Baylor and team-mate Toth.

KTM privateer Steve Nicholas topped the NE Pro2 division with an eighth overall finish, just edging out Trail Jesters Racing KTM’s Jesse Ansley by less than half a second. It was the Nicholas’ first win in the class.

“My dad only lives 20 minutes away from here, so I was familiar with the terrain, compared to the rest of the rounds,” said Nicholas. “I rode more comfortable today. I knew Jesse had a good gap on me going into the last section, but I just kept riding. I didn’t want to give up so I pushed every second of it. I’m happy to get this win.” 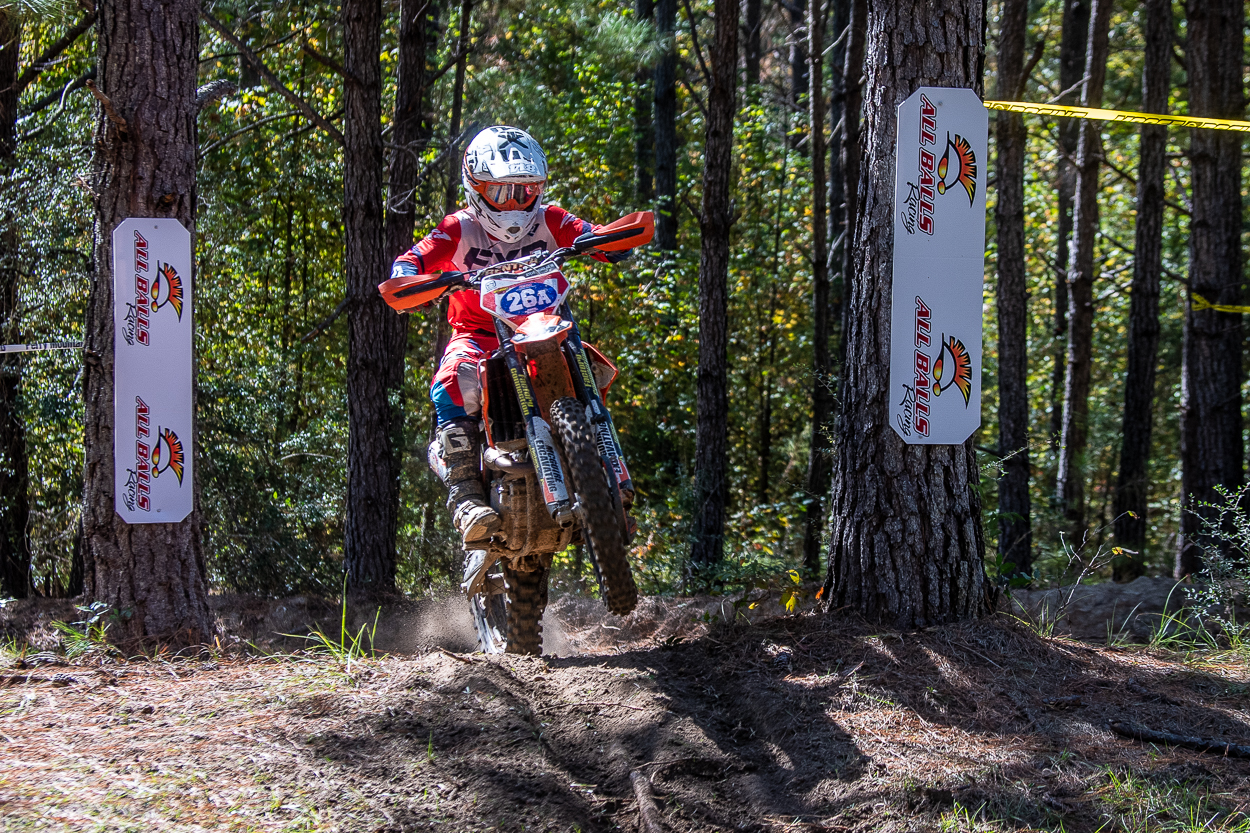 Jesse Ansley, who had already wrapped up the NE Pro 2 title two races before, started strong and had a 50-second lead going into the final test, only to clip a tree and go down. After the crash, Ansley finished second in the NE Pro2 class and ninth overall.

“I won the first four tests, but then I had a little mishap in the fifth test and ended up getting second for the test,” said Ansley. “Then the last test, I was going in with a 50-second lead. Halfway through, I just clipped a little sapling tree thing that was cut halfway and messed up my finger pretty good. It was really tough to hang on, pulling the clutch and whatnot afterwards. It kind of sucks to lose by less than half a second, but it’s just part of the game. I’m excited to wrap up the 2020 year and to be crowned champion.”

KTM rider Zach Hayes rounded out the top 10 and was third in the NE Pro2 class.

Shelby Turner turns it on outdoors

Not content with taking her fifth EnduroCross crown last weekend, Shelby Turner made sure the Women’s Elite race was a nail-biter between herself and Mackenzie Tricker. In the end, Turner came out on top by just under four seconds ahead of Tricker who claims the 2021 Elite Women’s crown.

“There were some tight sections, but for the most part I kind of found a groove and just kept plucking away,” said Turner. “So, super happy to come away with the win.” 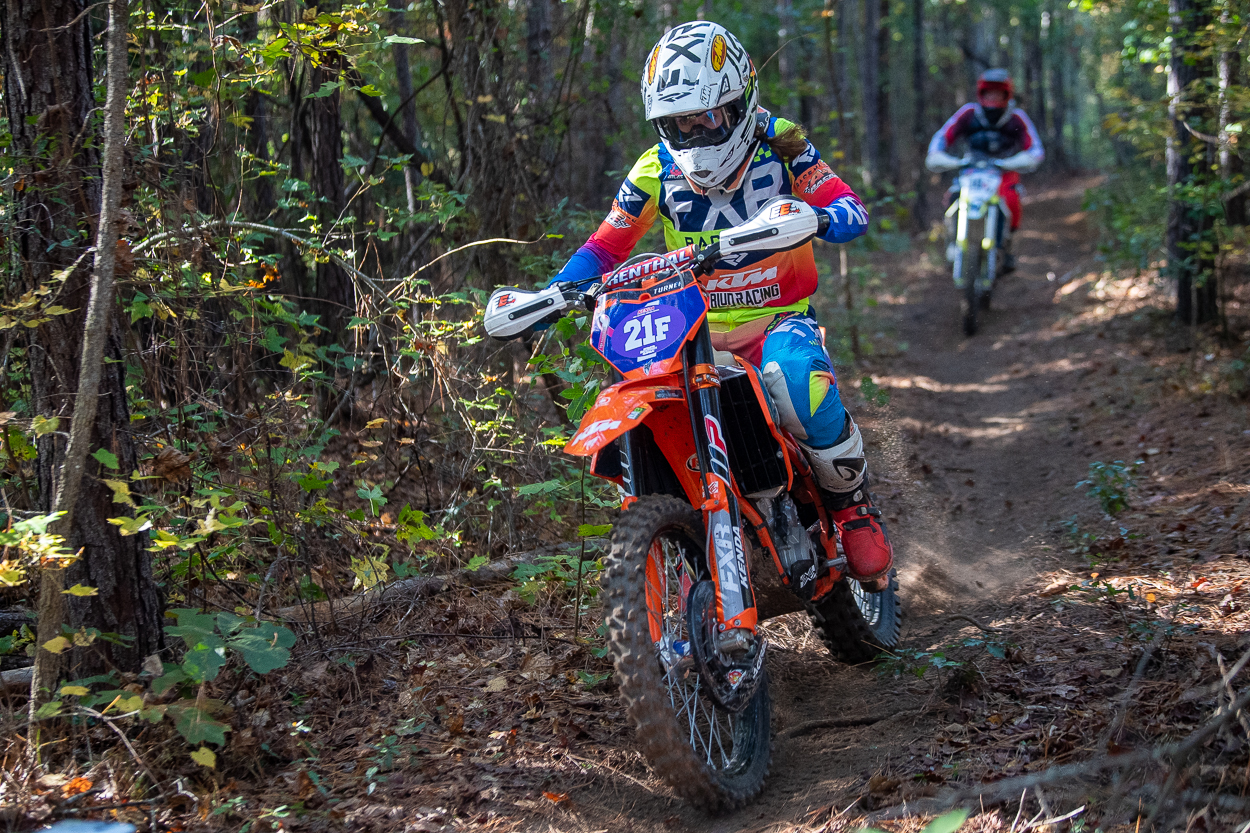 For Tricker though the Women’s Elite championship crowns a tough 12 to 18 months in her career. “It’s great to wrap up the championship,” said Tricker. “This year started off really rough, obviously coming off a really big injury and taking five months off from riding. Then at round two I just kind of had some bad luck and had to dig myself out of a hole.

“From there I started getting some wins and seconds and making up pretty good points on the girls that were in the championship. I’m stoked to get title number three.” Kori Steede rounded out the podium in third with some solid test scores.

Tanner Whipple won the AA class, with Logan Kittock and Andrew Clark rounding out the top three. Gavin Sievenpiper took the Open A win, with Josh Monsrud in second and Derek Gravitt third.