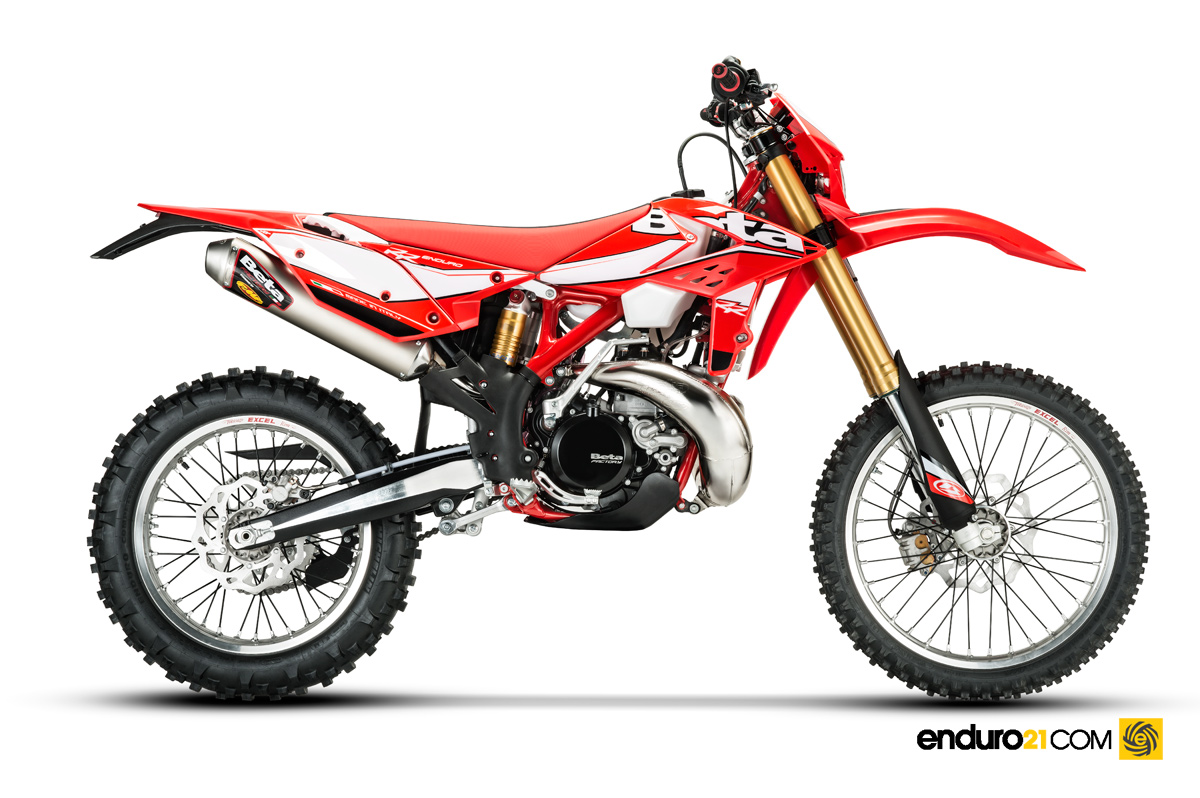 Following numerous developments for 2016, the Italian has largely undergone many tweaks and refinements than serious overhauls. Across the entire range we see a longer front fork, new rear shock, improved triple clamps and redesigned fuel cap.

The 250 and 300 2T continue with the automatic oil injection system introduced last year and meet Euro4 regulations, as does the Xtrainer. 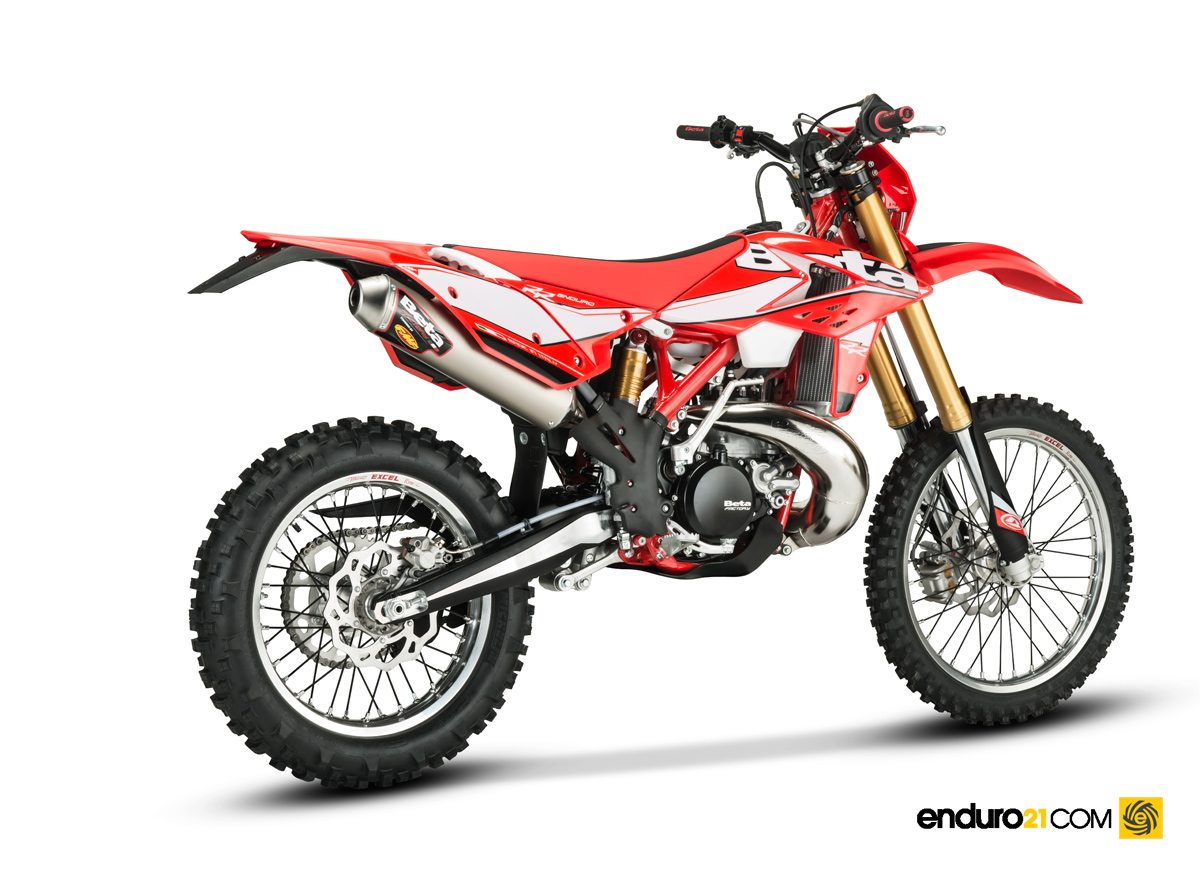 After a greatly successful 2016 season in both sales and racing, Beta returns in 2017 with their Enduro range that continues the forward progress of the brand through refinements in features and quality.

The 2016 season has seen Beta achieve its first-ever overall victories in the World Enduro Championship in Portugal and Sweden with racer Steve Holcombe along with many other victories from Johnny Aubert and Alex Salvini, both at the World and National level.

Beta continues to take the information they have learned from their race team as well as information from the everyday casual rider and combined the two to further enhance the riding experience. The 2017 RR models continue to offer an “easy to ride” philosophy while also providing the rider with a stable and distinct design along with the quality one expects from the brand. 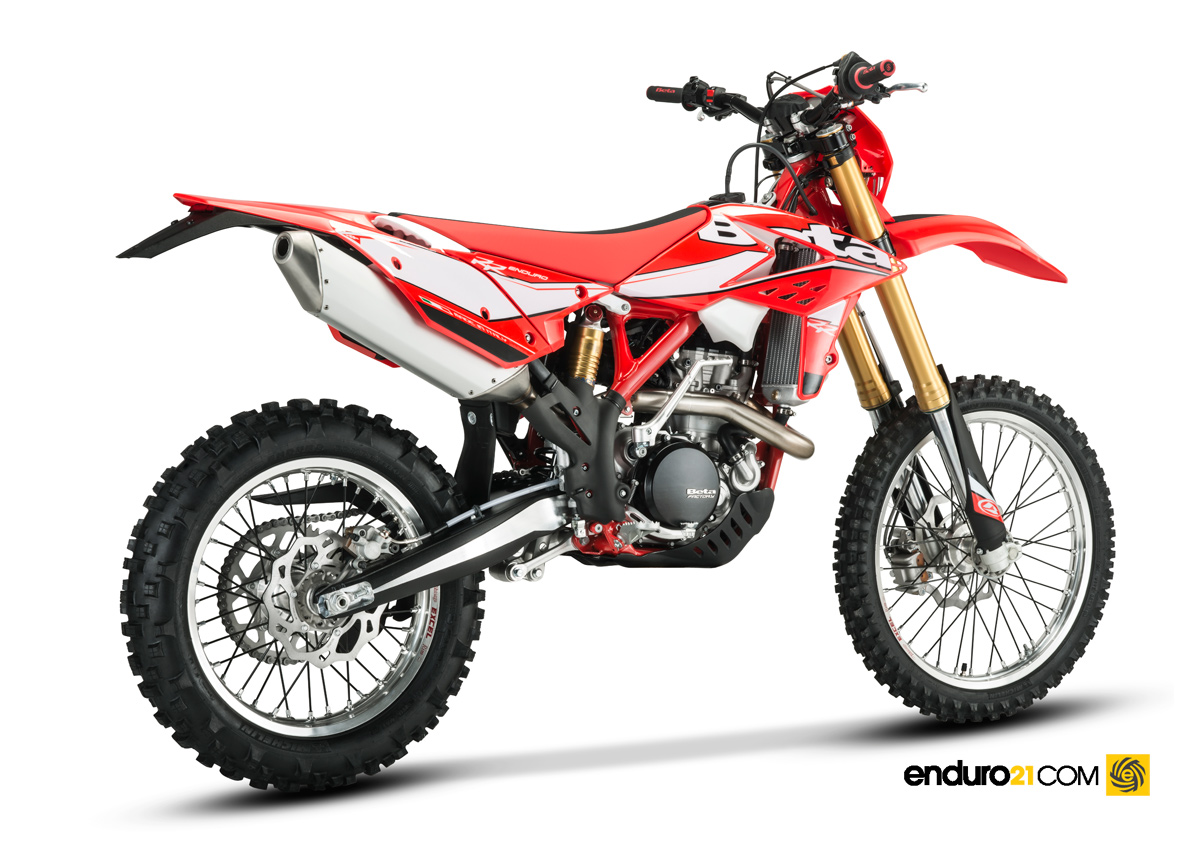 A number of features have been tweaked on all the models of the range and some of them come directly from experience at top competitive levels. The chassis, with the well-tested chrome-moly steel frame with double split cradle has the following new features:

Sachs fork: increased 5mm in length to provide longer travel. Liqui Moly oil has been installed to reduce heat build up and friction in the fork.

Sachs rear shock: new high/low speed adjustment system, now more accurate and independent from each other. This allows the rider to make more fine adjustments based on his or her riding style and needs.

Silver rims with black spokes: supplied by Excel, these new wheels are lighter and give the new bike a distinctive look.

Digital meter: new design, along with the timer, kilometre/mph indicator with more adjustment features including instant speed, average and maximum speeds as well as the ability to adjust mileage in smaller increments. Also new for 2017 is a built in battery voltage reading. 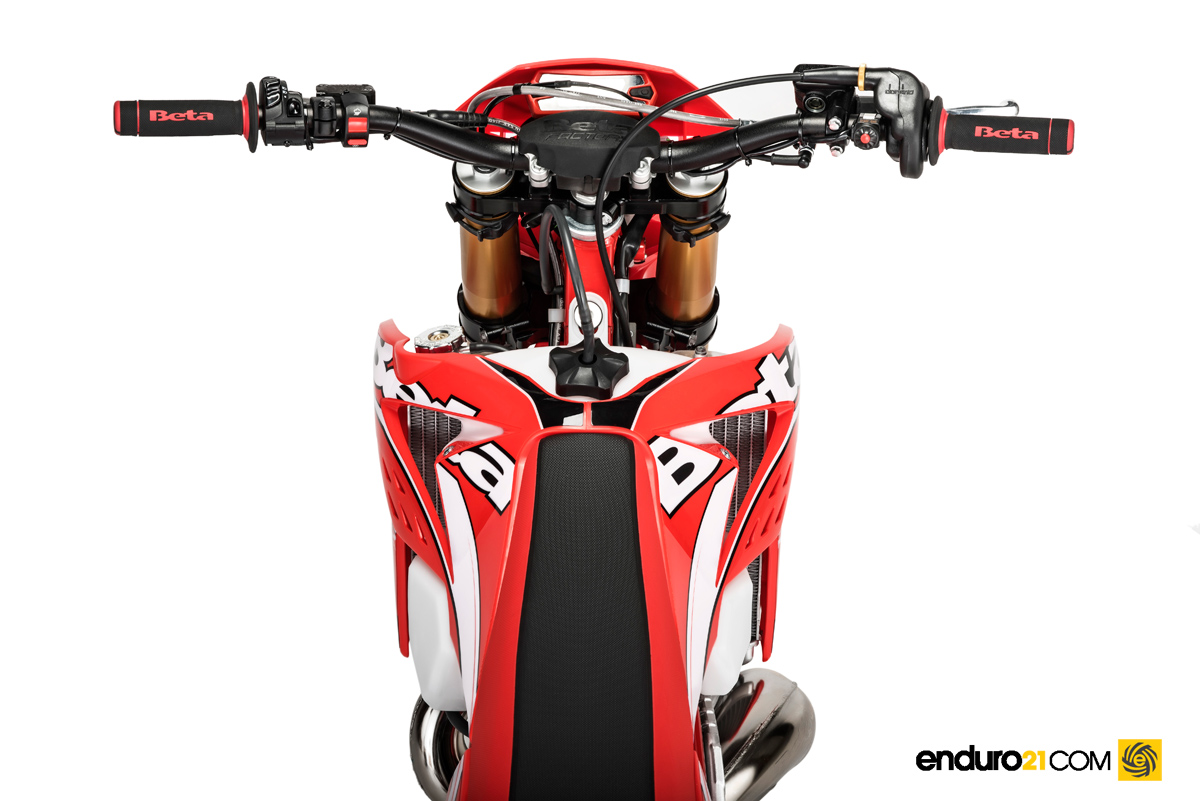 A fine development was carried out also on the engines, which also thanks to the contribution of the Beta Factory Team riders – Steve Holcombe and Johnny Aubert for 2T and Alex Salvini for 4T – have led to the introduction of important new features.

For the 250 and 300 2T, introduced in 2016, the automatic oil injection system continues: as well as ensuring a perfect fuel-oil mix under any condition, it eliminates the trouble of having to premix the oil and fuel and eliminating the need to carry oil with you in the event of a fuel top up.

Both propulsion systems are in line with the Euro4 European regulation – for units made in the second half of the year – and have a control unit designed for a CAN connection to interact with generic diagnosis instruments. 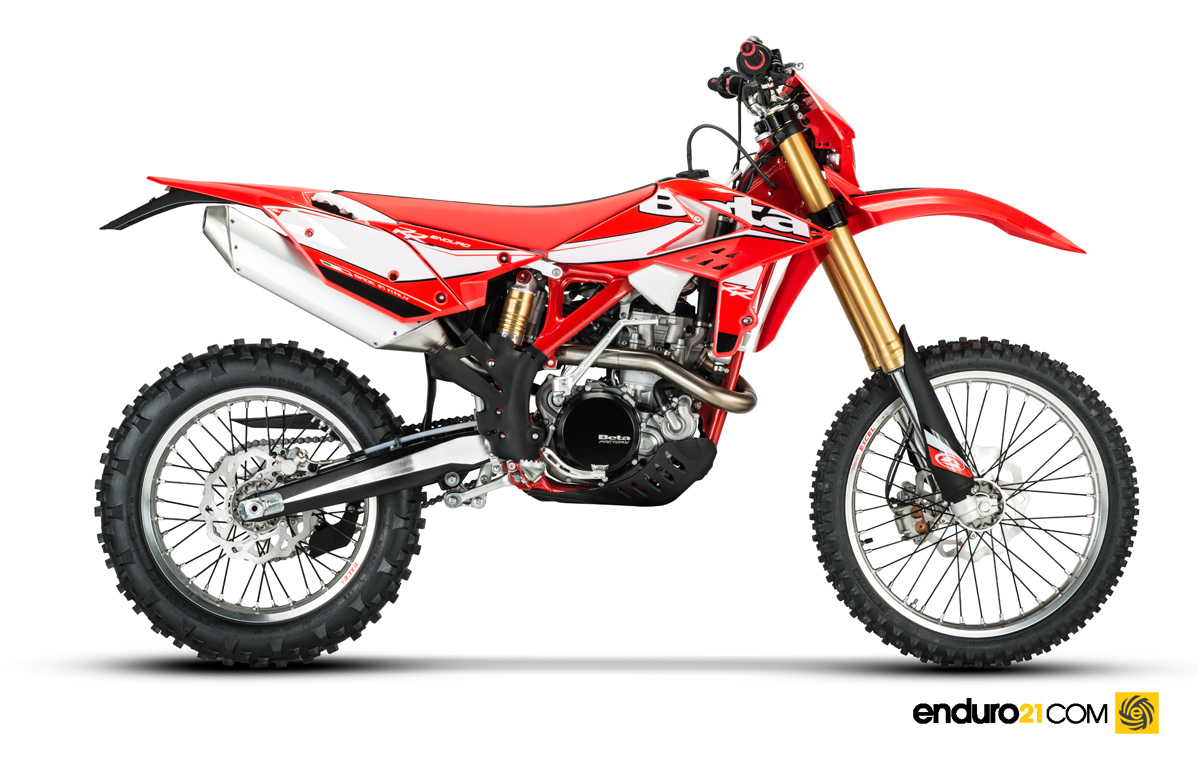 Electronic Fuel Injection continues on all 4T models including 350, 390, 430 and 480. Thanks to its great reliability, easy control and outstanding throttle response, it has generated great positive feedback from end users.

The system continues to be refined by the Beta team of engineers along with Synerject. The 42mm throttle body provides the optimum performance without the “hard hit” most current EFI off road motorcycles suffer from.

The following are introduced on all displacements, already in line with the Euro4 European regulation:

camshafts: the new lift profiles radically change the core of 4T engines, making them even easier to ride, whilst retaining their top performance.

valve springs: which, combined with the camshafts, are used to considerably improve performance of the engine at the bottom end of the power delivery and also reducing the engine braking. 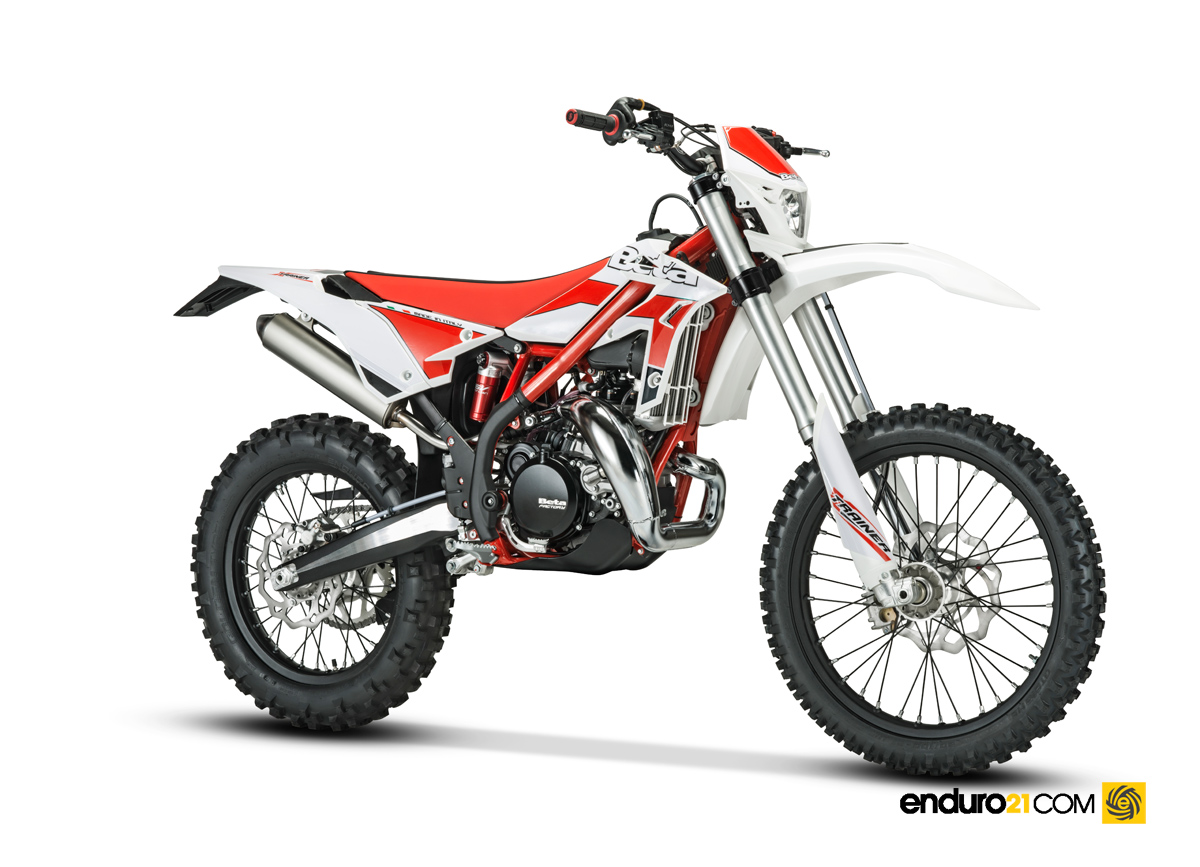 Once again, the control unit is designed for a CAN connection to interact with generic diagnosis instruments.

For the RR range, prices unchanged compared to the model year 2016.

The Xtrainer 300 model, with new graphics, has been updated according to the Euro4 regulations.