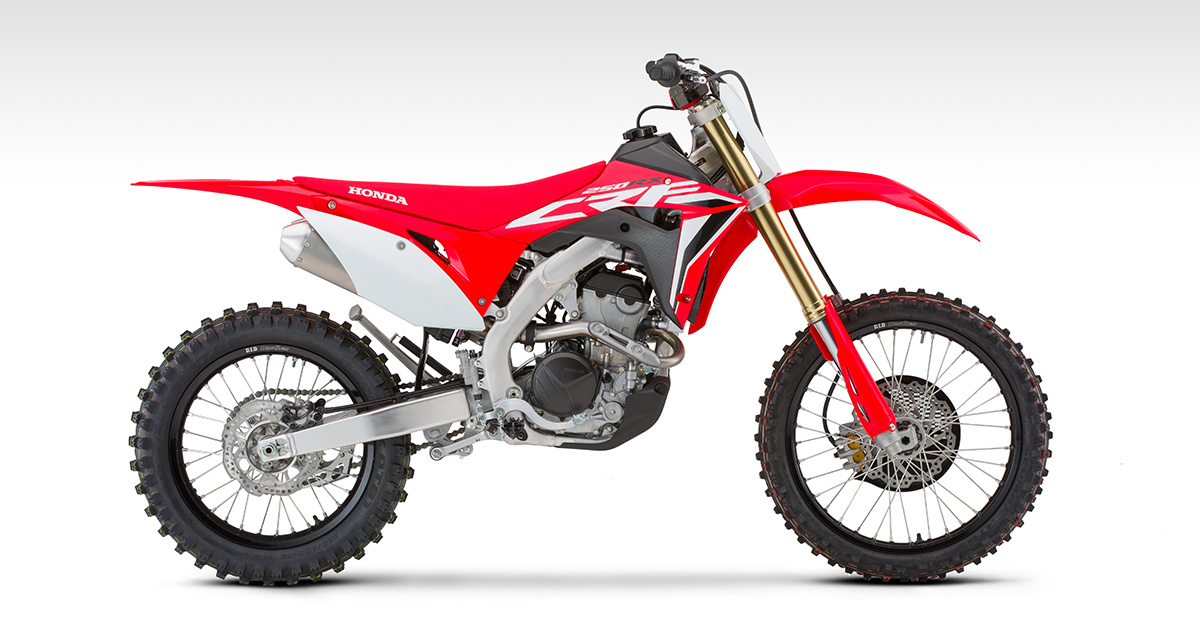 “We’re pleased to confirm the return of these 2021 models, all of which have been successful in terms of both performance and sales,” said Chris Cox, American Honda’s Manager of Experiential Marketing/Public Relations.

It is a statement which tells you all you need to know about the 2021 off-road bikes from Honda – simply that they exist. The new model information from Honda lists the more focused CRF250R, CRF250RX and CRF150R plus the user-friendly CRF250F, CRF125F and CRF110F, which “continue to attract new riders to off-road motorcycling”. The Honda line-up certainly has options depending on your experience and preferred riding.

The reality is Honda does not appear to have updated the 2021 bikes, right down to the identical graphics and plastics. Missing from the media information though are the larger capacity red 450 machines, which leads us to expect news on them arriving in the near future.

Any potential changes to the CRF450R and possibly the CRF450RX are based on rumoured updates to the MXGP and Supercross machines raced by Tim Gasjer and Ken Roczen this season.

We await that news, in the meantime here’s what Honda America had to say about the 2021 models so far… 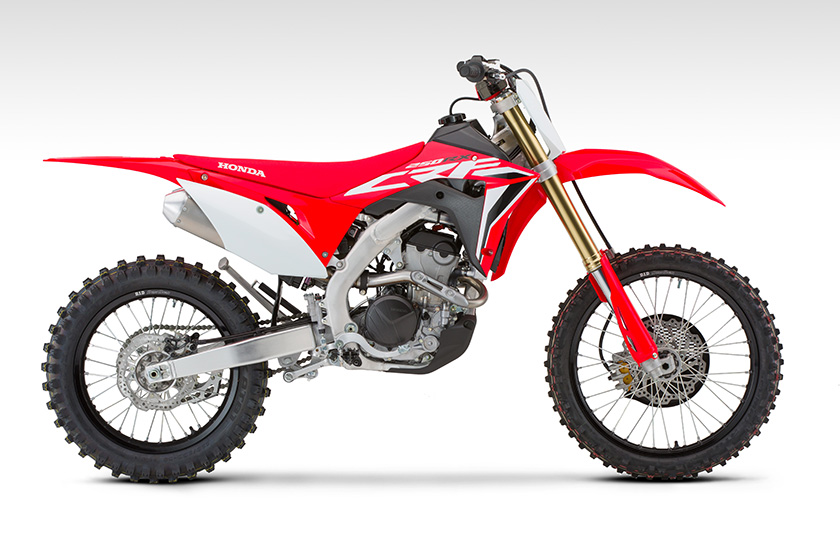 The machine that took Phoenix Racing Honda rider Kyle Peters to the 2020 AMA Arenacross title returns for the 2021 model year, with strong power across the rev range and a low-center-of-gravity chassis layout that delivers nimble, stable handling. 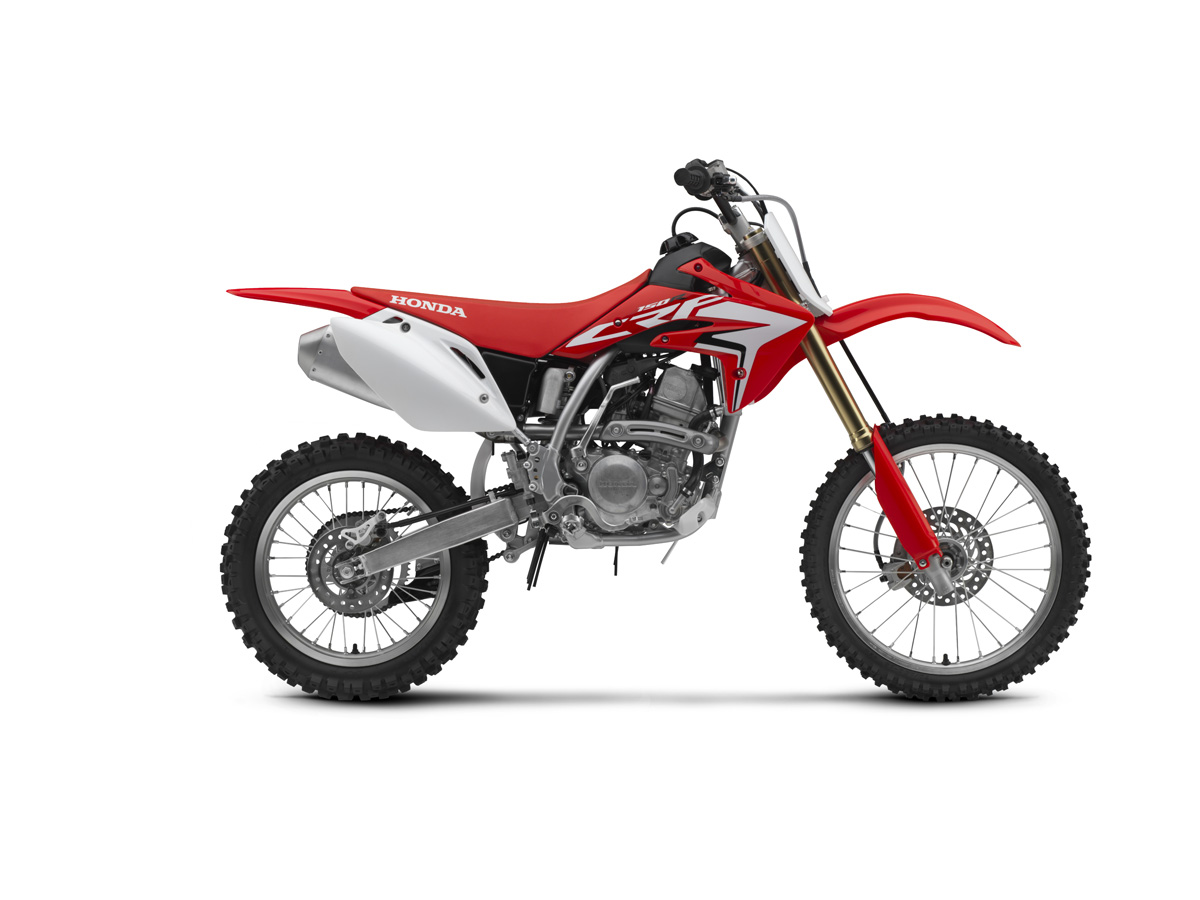 The powersports industry’s top-selling mini motocrosser, the CRF150R has a Unicam® four-stroke engine—unique in the mini MX world—that delivers smooth, ample torque across the rev range. The Showa® suspension components comprise a 37mm inverted fork and a Pro-Link® rear-suspension system with a single Showa shock. 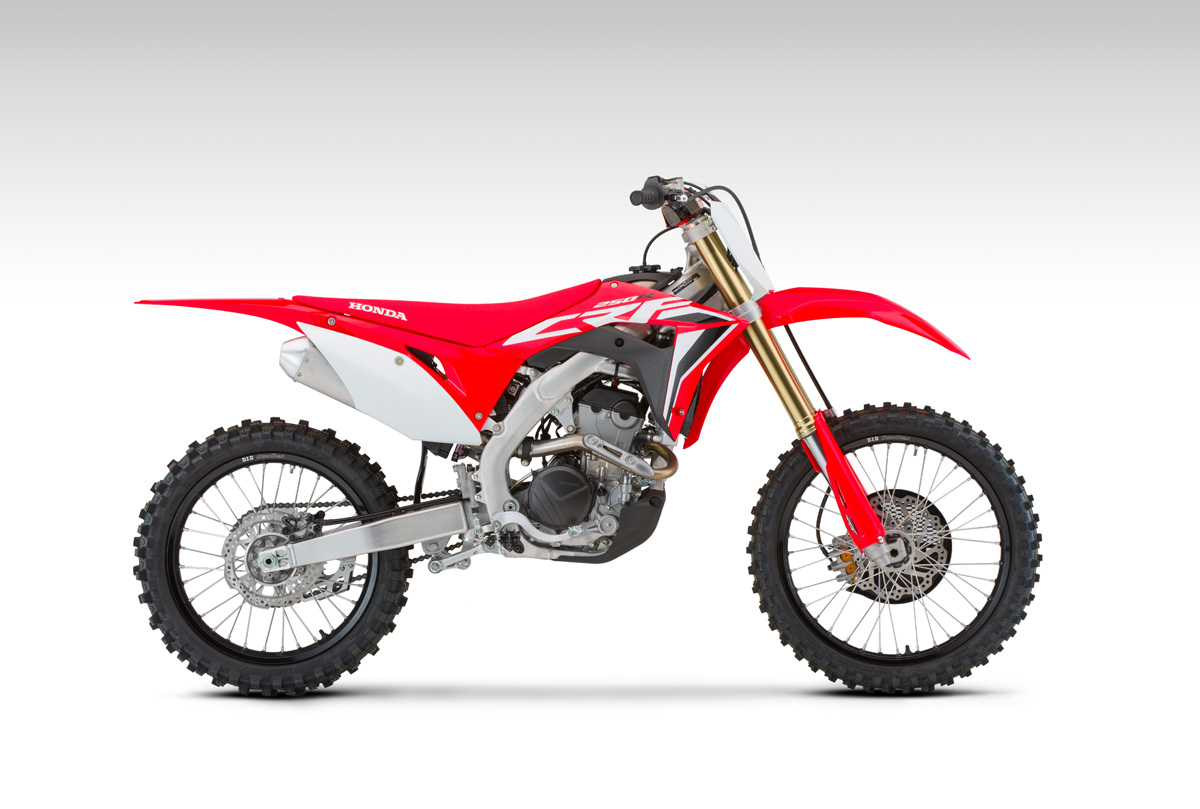 An incredibly versatile trail bike, the CRF250F can take riders from their first time on dirt to tackling challenging terrain. The flagship of Honda’s CRF Trail line features Keihin electronically controlled fuel injection and is year-round off-road legal in all 50 states.

Its SOHC long-stroke, air-cooled engine delivers smooth acceleration and excellent rear-wheel hookup, and its perimeter steel frame and Showa suspension offer confidence-inspiring handling and a compliant ride in varied terrain. Add it all up and the result is a fun-but-capable trail bike that’s ready for just about anything—and any rider. 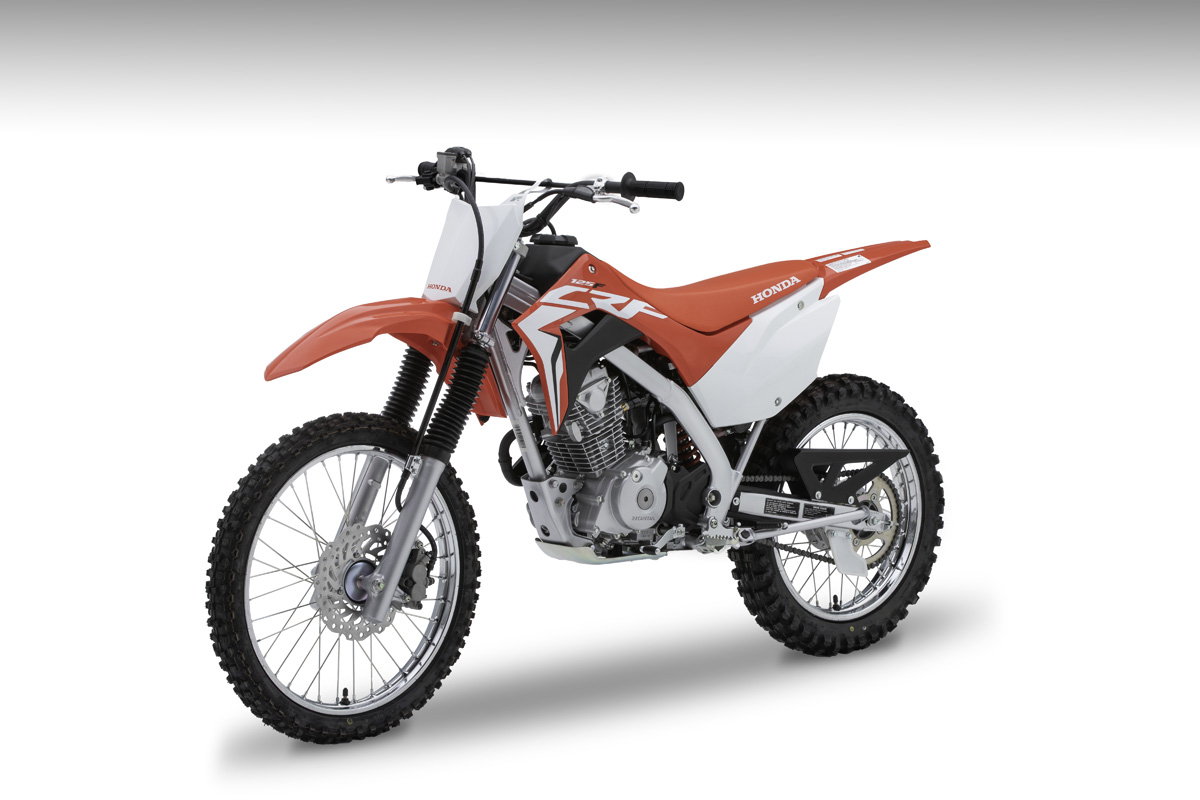 The midsize CRF125F trail bike is available in two versions—standard and Big Wheel, the latter accommodating taller riders with larger front and rear wheels, longer-travel suspension and a higher seat.

With their fun performance and looks that mimic those of the CRF Performance line, both versions of the CRF125F promise years of recreational trail-riding enjoyment, and with clean-running Keihin electronic fuel injection, both boast 50-state 12-month off-road legality. 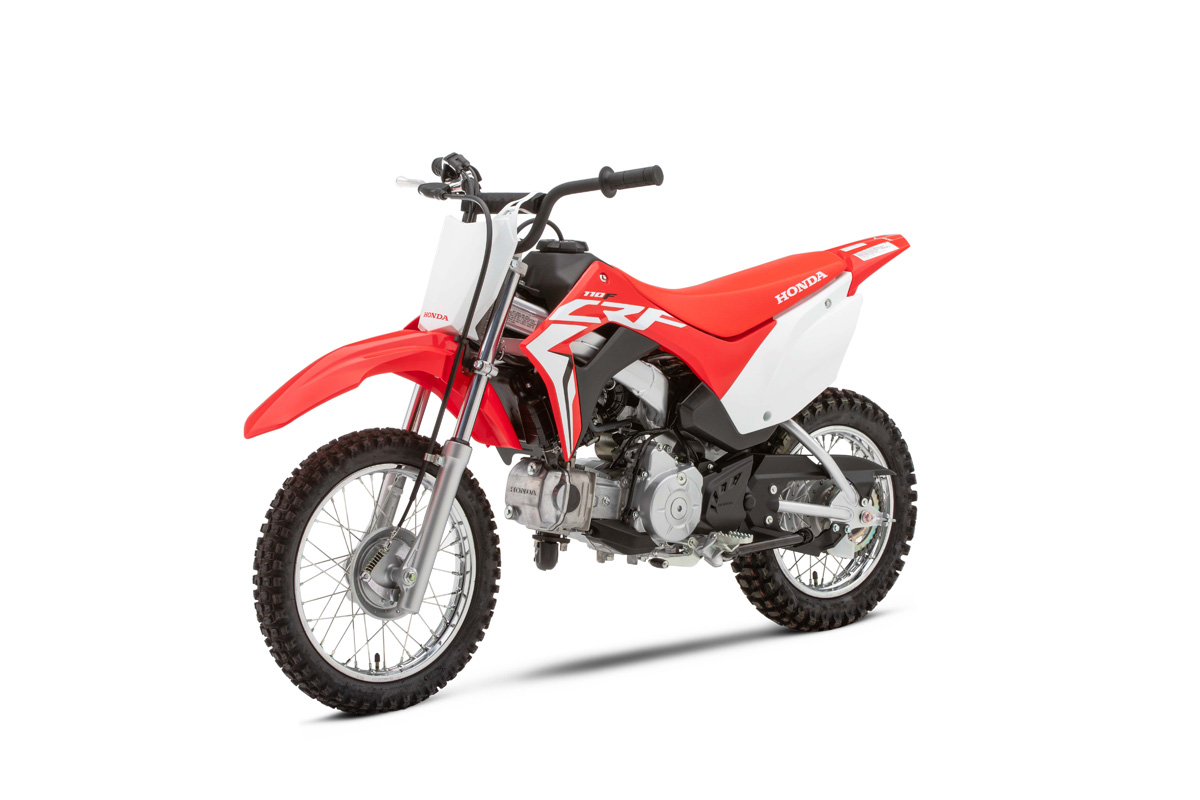 With its proven durability and new-rider-friendly performance, the CRF110F is the powersports industry’s top-selling off-road motorcycle, and it’s no wonder: This model perfectly encapsulates Honda’s proud heritage—extending back nearly four decades to the legendary XR75—of four-stroke trail bikes that are kid-sized but full-featured.

In the modern era, that means clean-running Keihin fuel injection and 50-state year-round off-road legality, as well as a clutch-less four-speed semi-automatic transmission and push-button electric start. The CRF110F is sure to continue delivering smiles long after riding skills develop, so there’s no telling where it could take generations of youngsters. 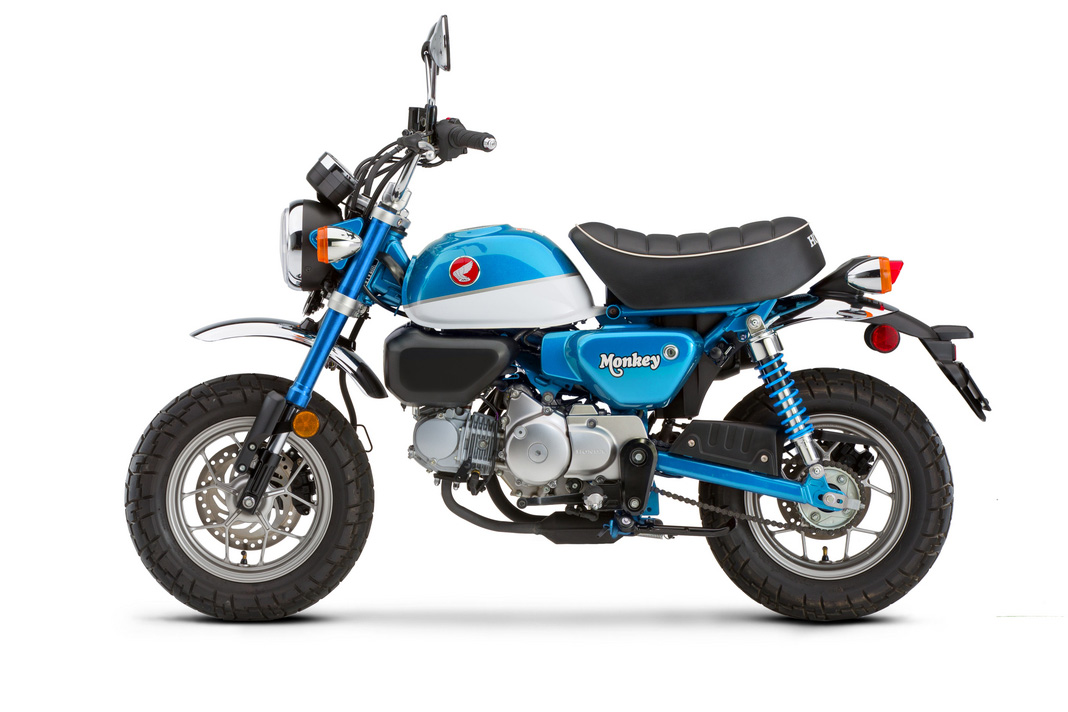 Celebrating its 60th anniversary this model year, the legendary Monkey oozes history and tradition, having originally been produced in 1961 for Tama Tech, a Honda-owned amusement park in Japan.

But while this miniMOTO bike’s looks and spirit are faithful to the Monkey’s earliest concept of making mobility fun, its modern iteration touts convenient features that help it perform well and run reliably, which explains why it’s a hit with both nostalgic customers seeking a trip down memory lane, and a new generation of enthusiasts.