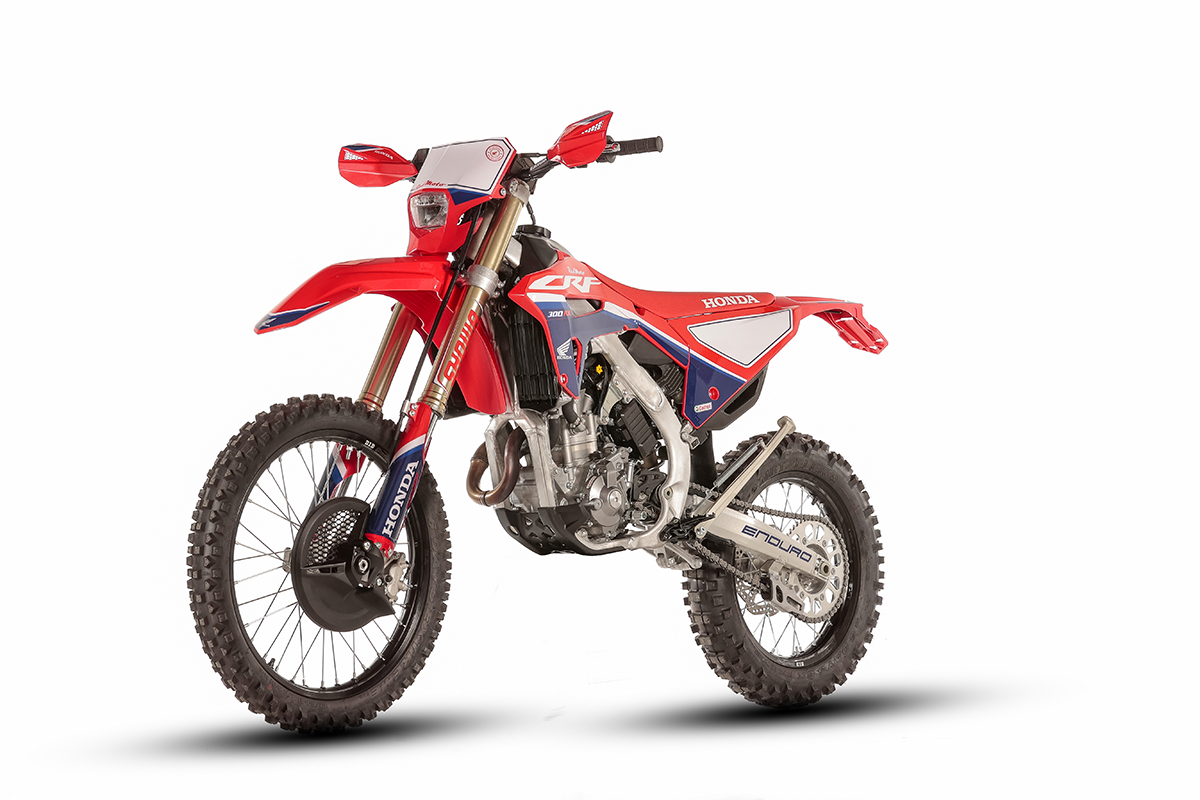 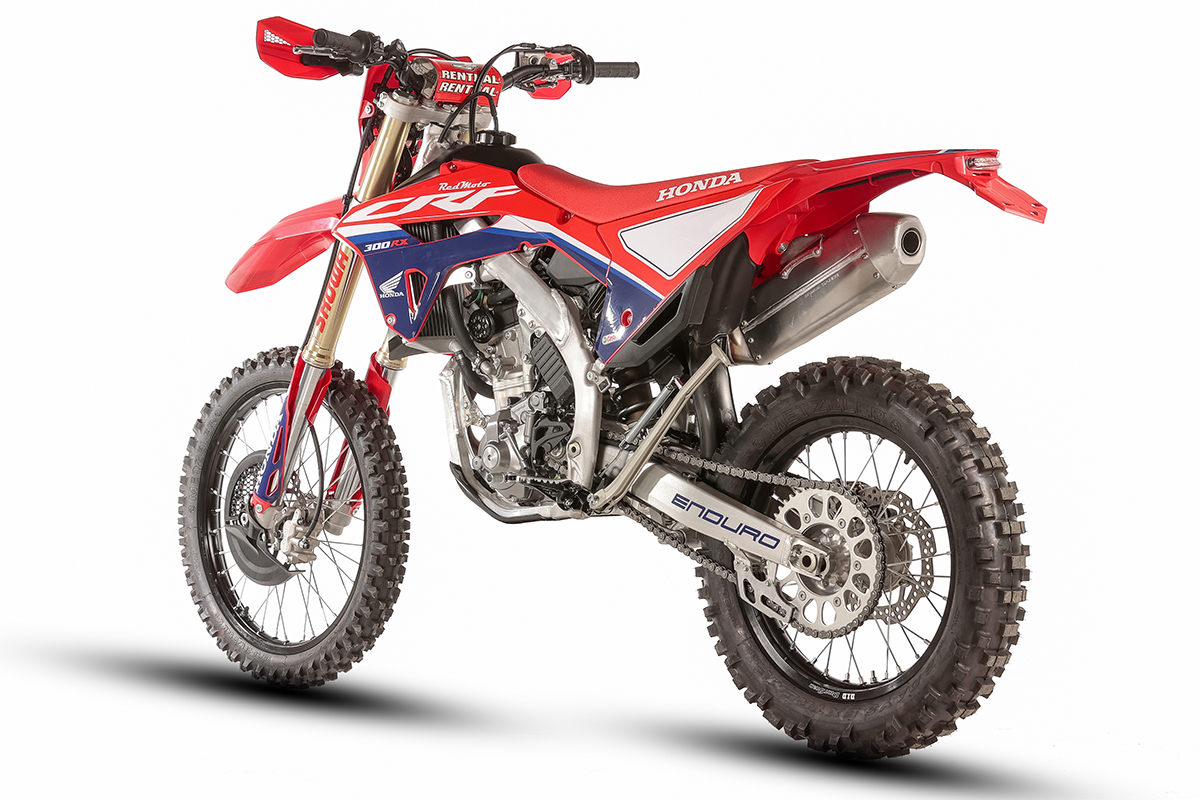 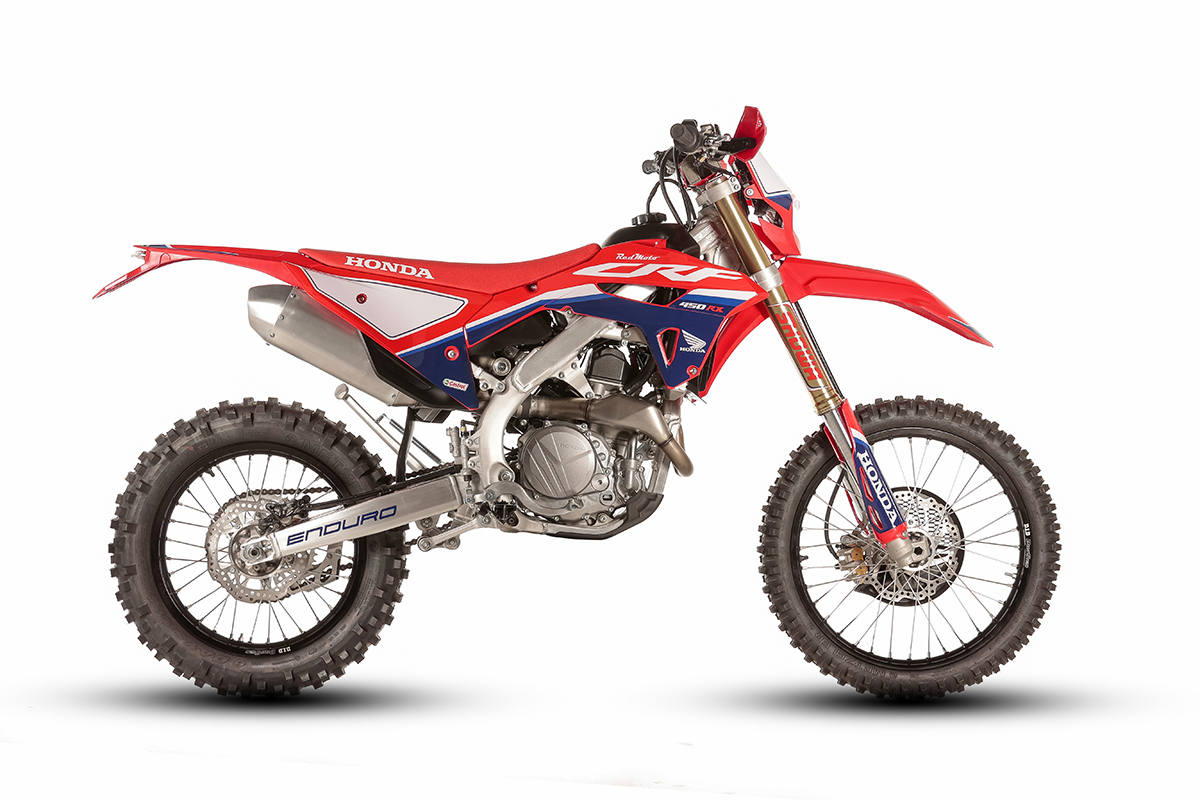 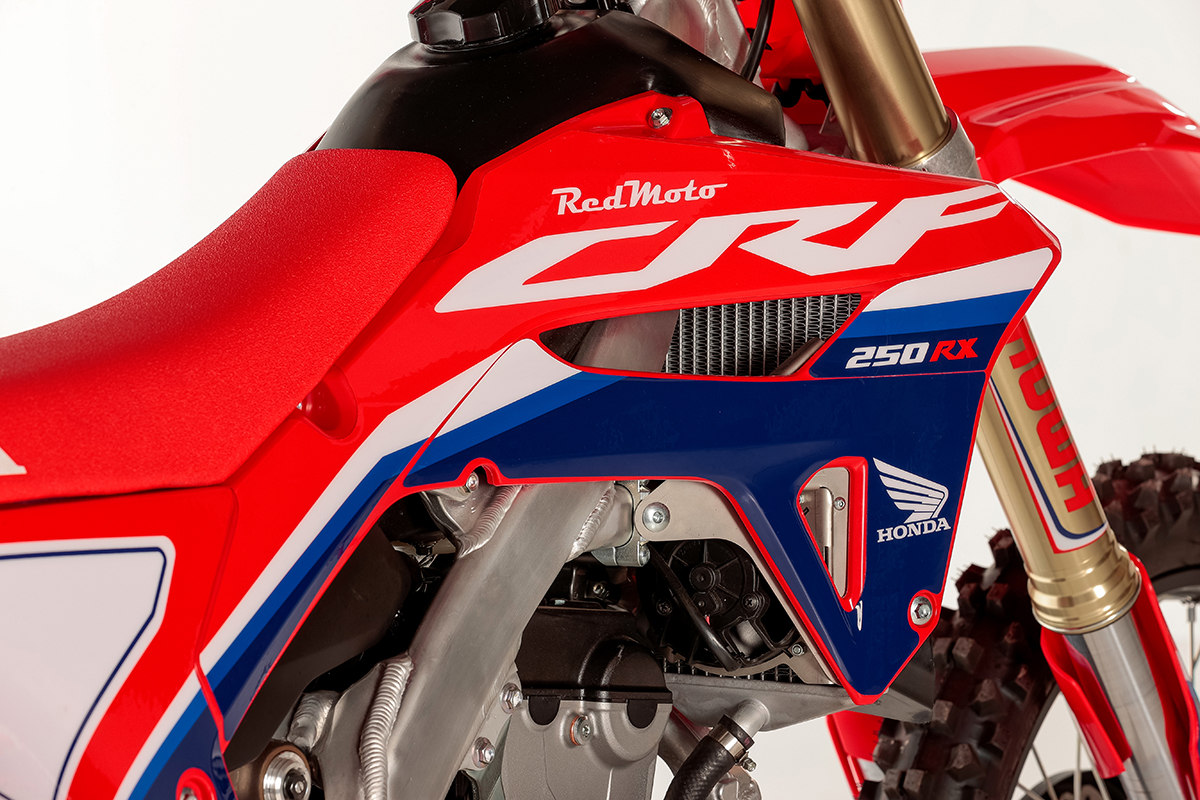 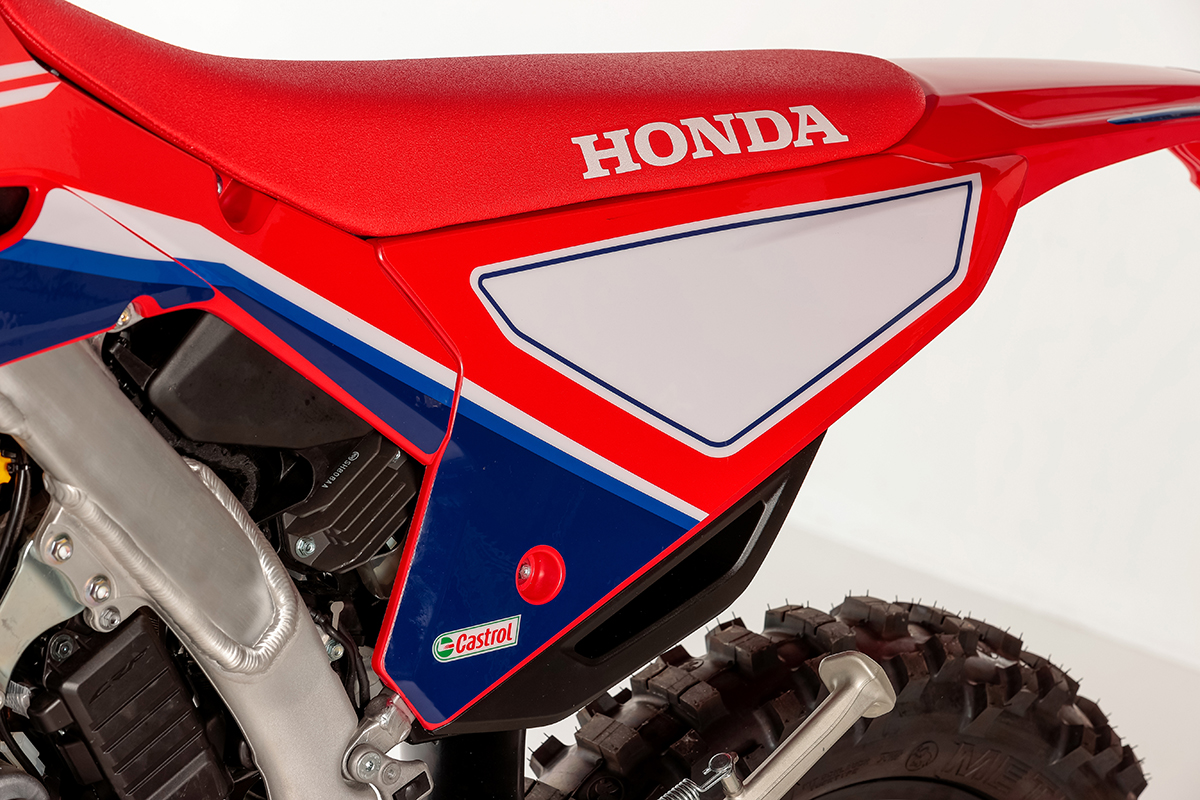 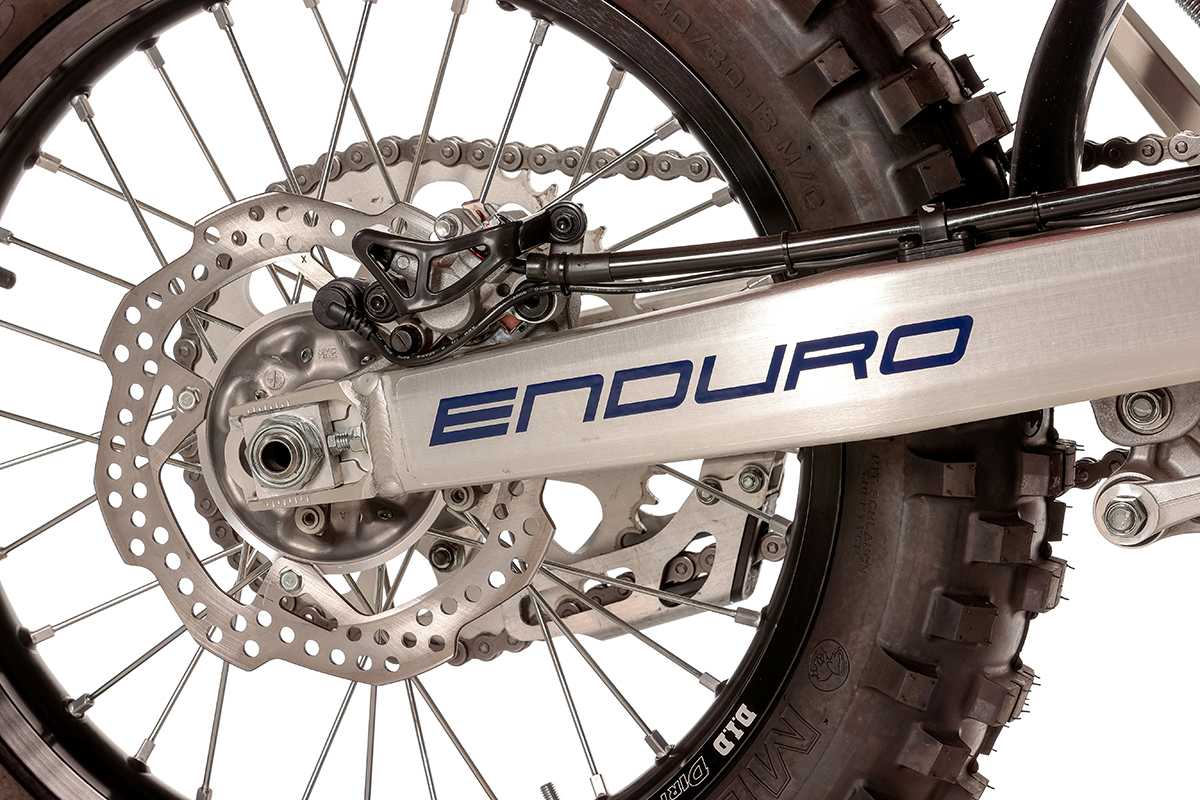 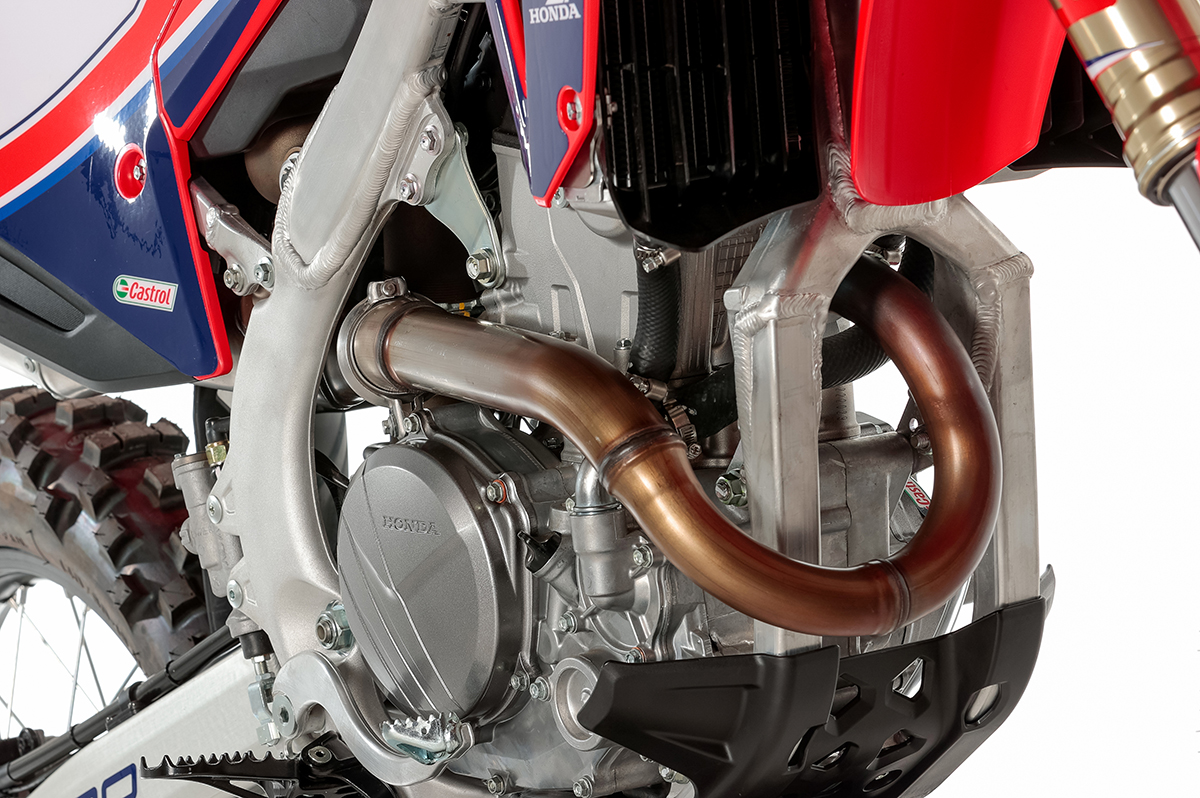 The RedMoto Honda range should be familiar to Enduro21 readers by now but if you don’t know, they are the official partner of Honda Motor Europe. Not only do they distribute CRF (and all Honda motorcycles) in Italy but they also develop their own homologated Enduro range in tandem with their race team which competes in the EnduroGP World Championship.

RedMoto go further than just taking standard Honda models and homologating them though, they double the two-bike RX line-up to four with 250, 300, 400 and 450cc versions. All bikes are built in-house using the race team for all R&D including development of those unique 300 and 400cc model engines.

The new CRF250RX is the strongest it’s ever been, Honda tell us. Inheriting the chassis of the ’21 450 model, the baby CRF RX off-roaders are where the focus is for the Big Red this coming season.

Honda can be a little slower about making the upgrades than some manufacturers but when they come, they are meaningful: extensive cylinder head development “producing a considerable low-rpm torque boost” while improving engine reliability, more efficient radiators, a new nine plate clutch with a lighter lever feel, a stronger gearbox with revised ratios and the Showa suspension is re-valved for enhanced bump absorption…even handguards are a standard fit now.

For 2022 the changes to the 400 and 450 RX models are less dramatic after big updates last year – just suspension tweaks and ECU mapping changes for the big, red bikes. 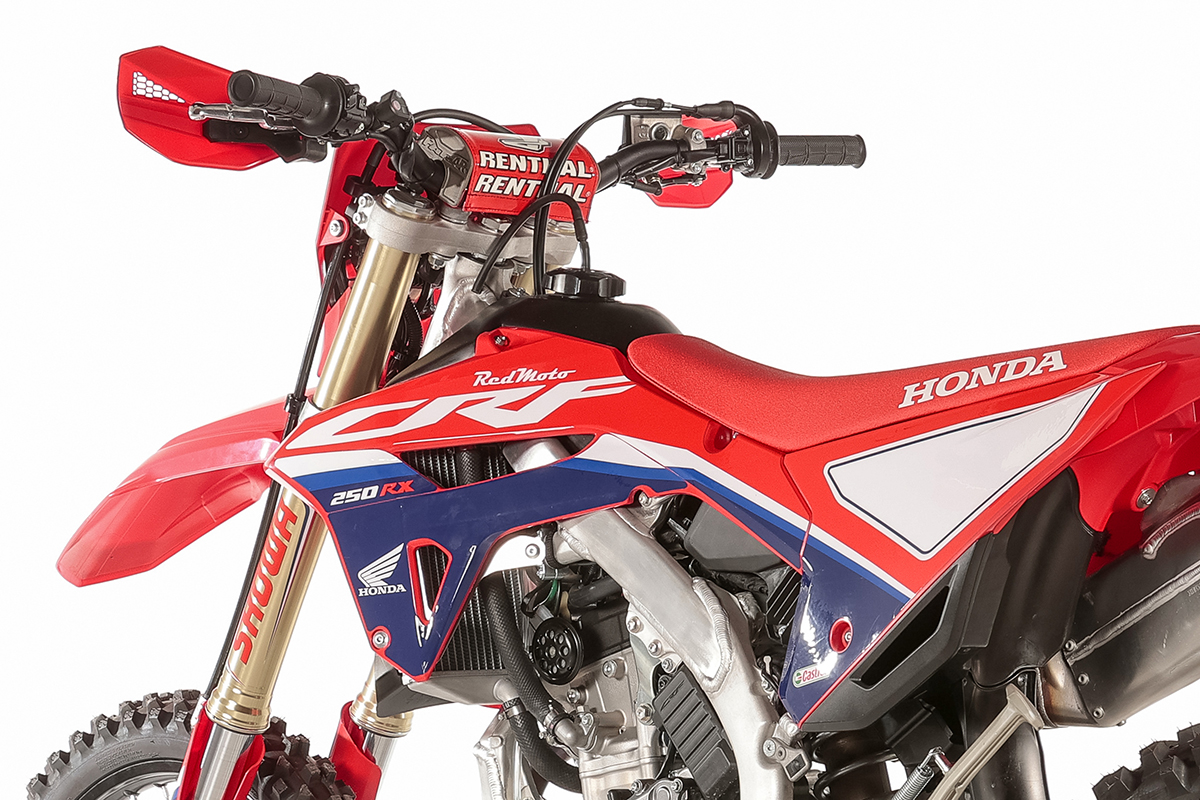 A full three kilogrammes lighter overall, more low-down power, a new frame plus tighter chassis geometry, more ground clearance and the return of the single muffler – the CRF250RX and CRF300RX are where the focus is for 2022….

The full LED lighting system RedMoto install to all models matches the Honda CRF design with a sturdy rear mudguard which has integrated support for the registration plate holder, that also increases the resistance to the impacts they say. The red-blue graphic also mark it out from the standard Honda model too.

RedMoto also work on the engine mapping through each gear to better suit enduro. More work goes into the 300 engine naturally which features its own, exclusive top-end from Athena.

What’s it like to ride? When Enduro21 has tested the bikes the 300 is like the easy-to-ride 250 but picks up earlier in the rev-range, has a smooth and linear delivery with more torque at lower rpm. Overall, RedMoto claim there’s up to 10% more power and 15% torque across the rev-range for fluid, same gear corner-to-corner over-rev.

The 450 and 400RX models, like Honda’s official R and RX model range, received major updates for model year 2021. They were big changes including a completely revised chassis,  2kg less weight, new hydraulic clutch, more power and torque, easier start and a heap of engine and electronic changes to make the bikes easier to ride and, well, faster.

For 2022 the 450 and 400 RedMoto RX models have fewer updates except new ECU settings to bring “smoother drivability” to the engine response and power delivery. There’s also a damping re-valve for the Showa suspension to improve balance between front and rear, and overall control they say. 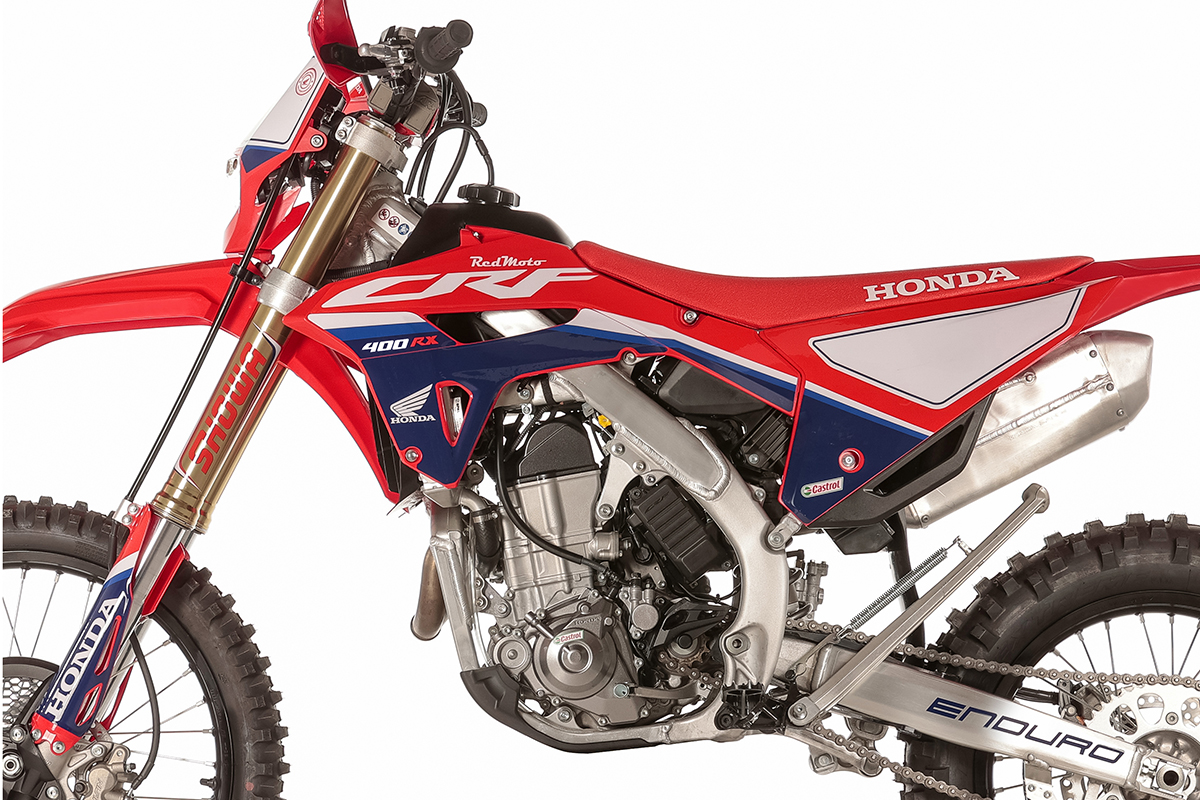 What’s the 400 like compared to the 450? Pretty much as you’d expect which is to say a little less fire in the belly and, if anything, a little more trail friendly. To anyone who’s ridden the latest 450RX you’ll know it is a very thinly disguised motocross bike which is arguably too much for most people riding enduro. The 400 is more manageable.

Read more about those 2021 CRF450 updates in our previous story here.

2022 RedMoto prices (including the upgraded ‘Special’ models – more on those in the coming days, stay tuned):