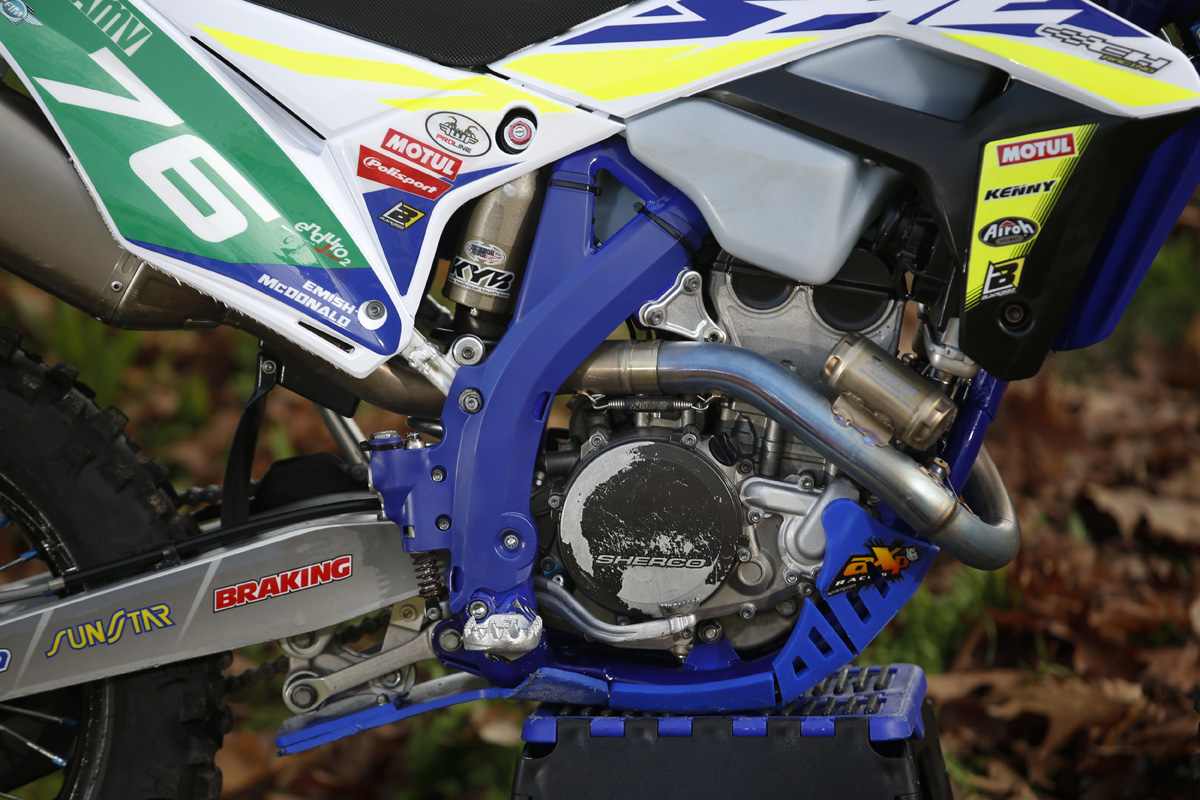 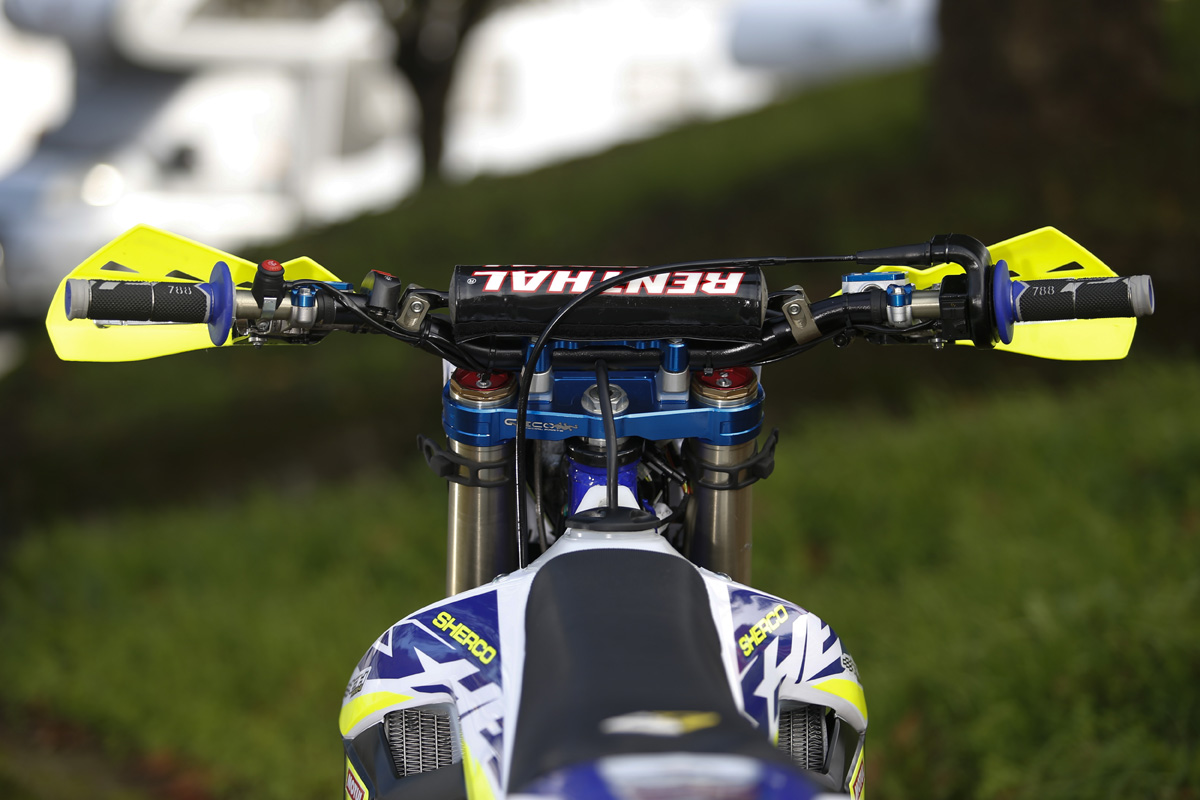 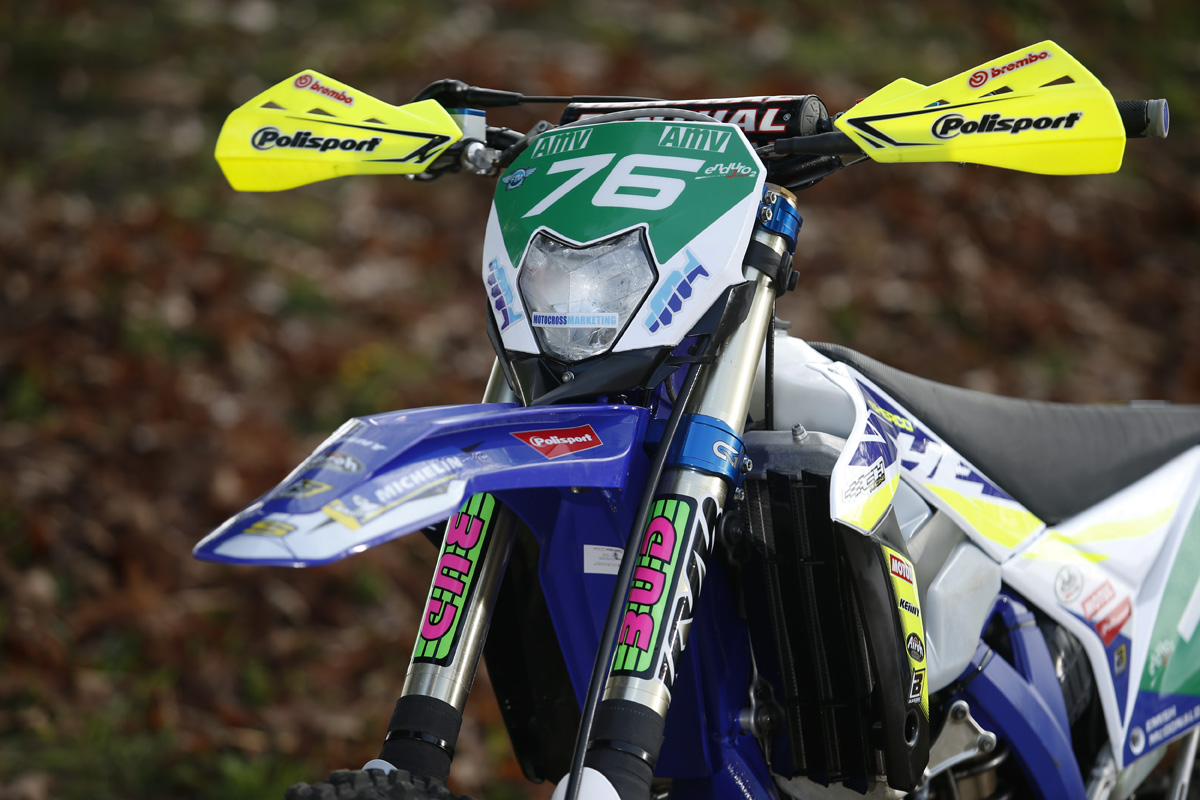 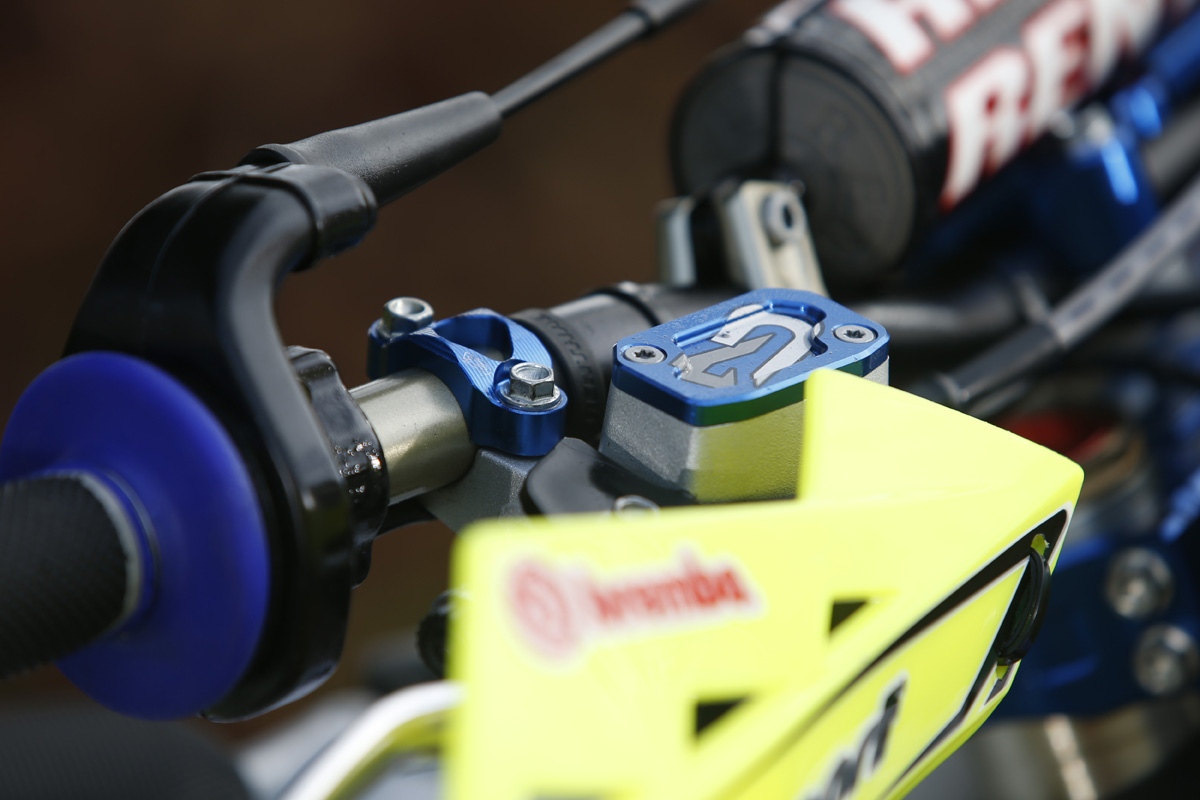 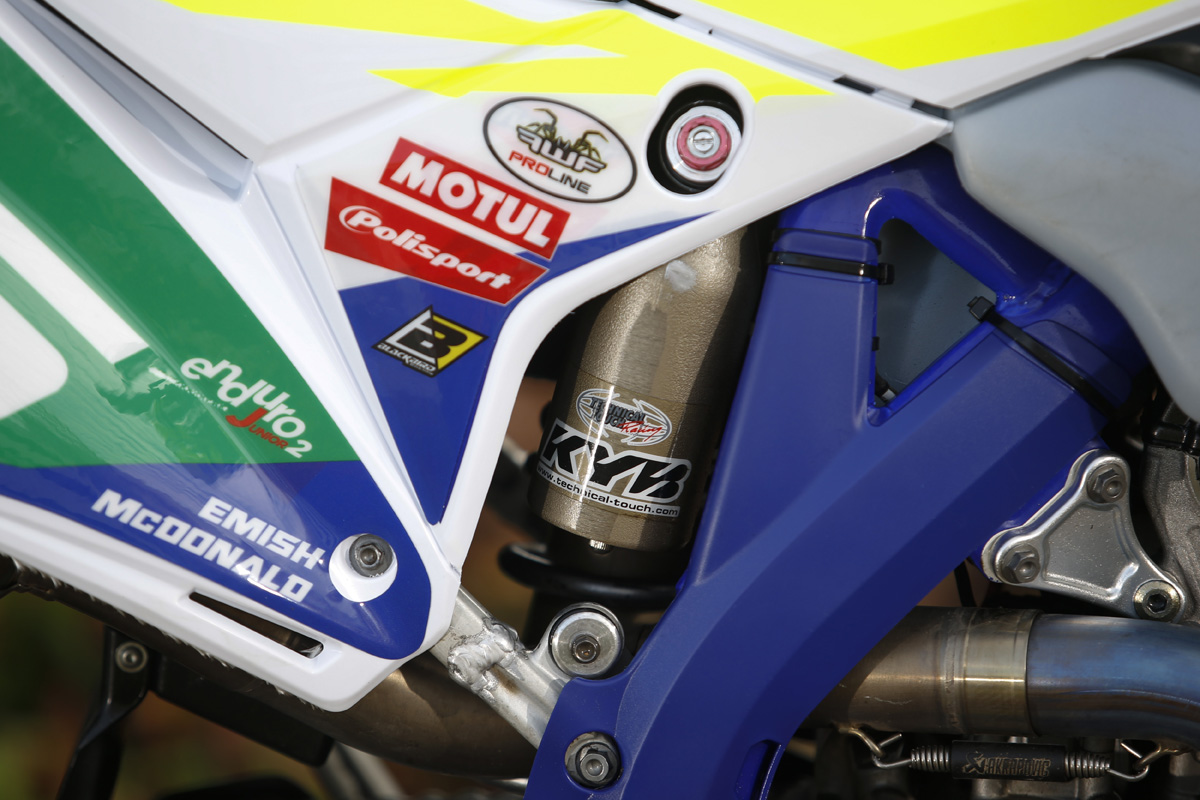 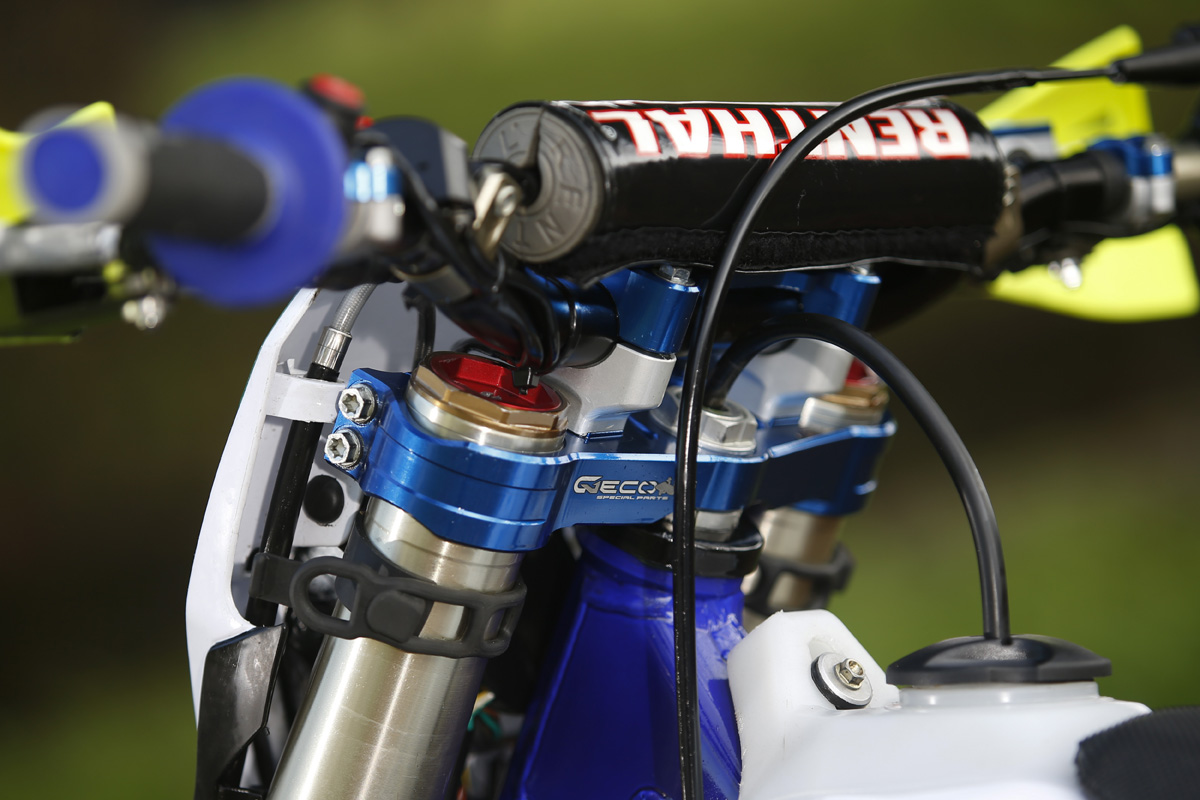 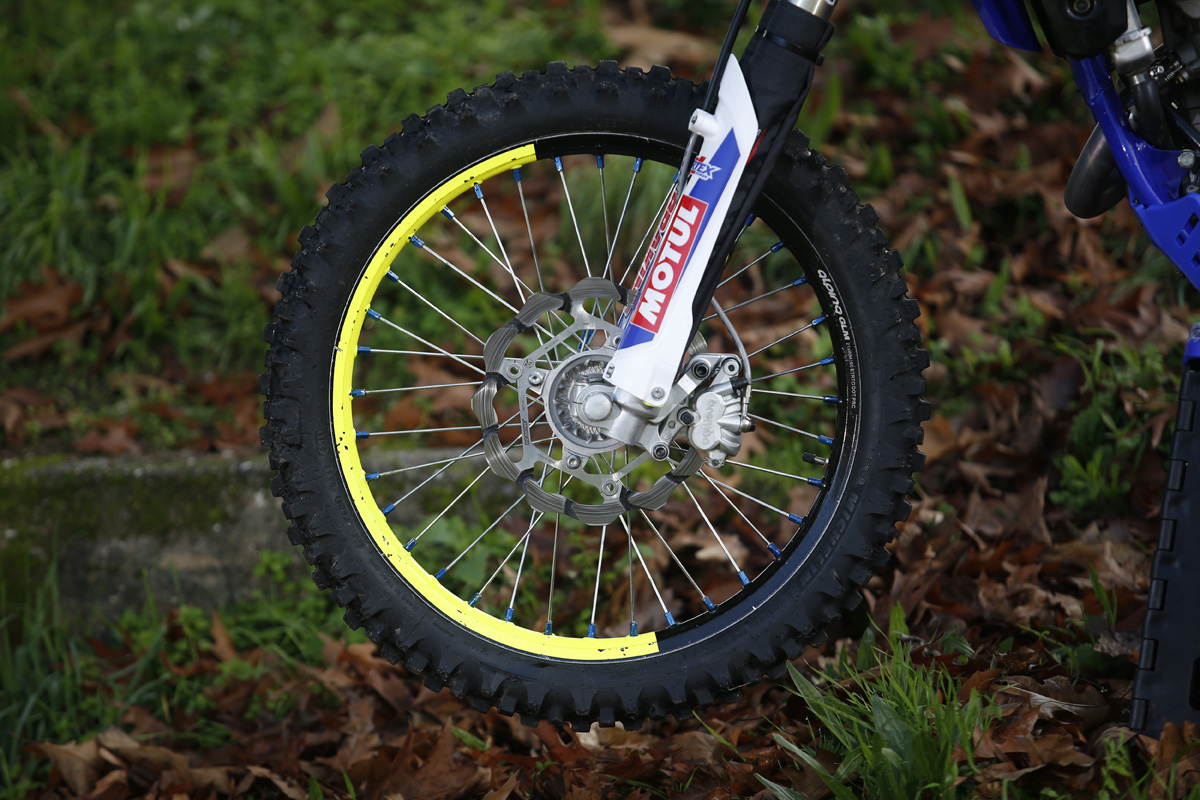 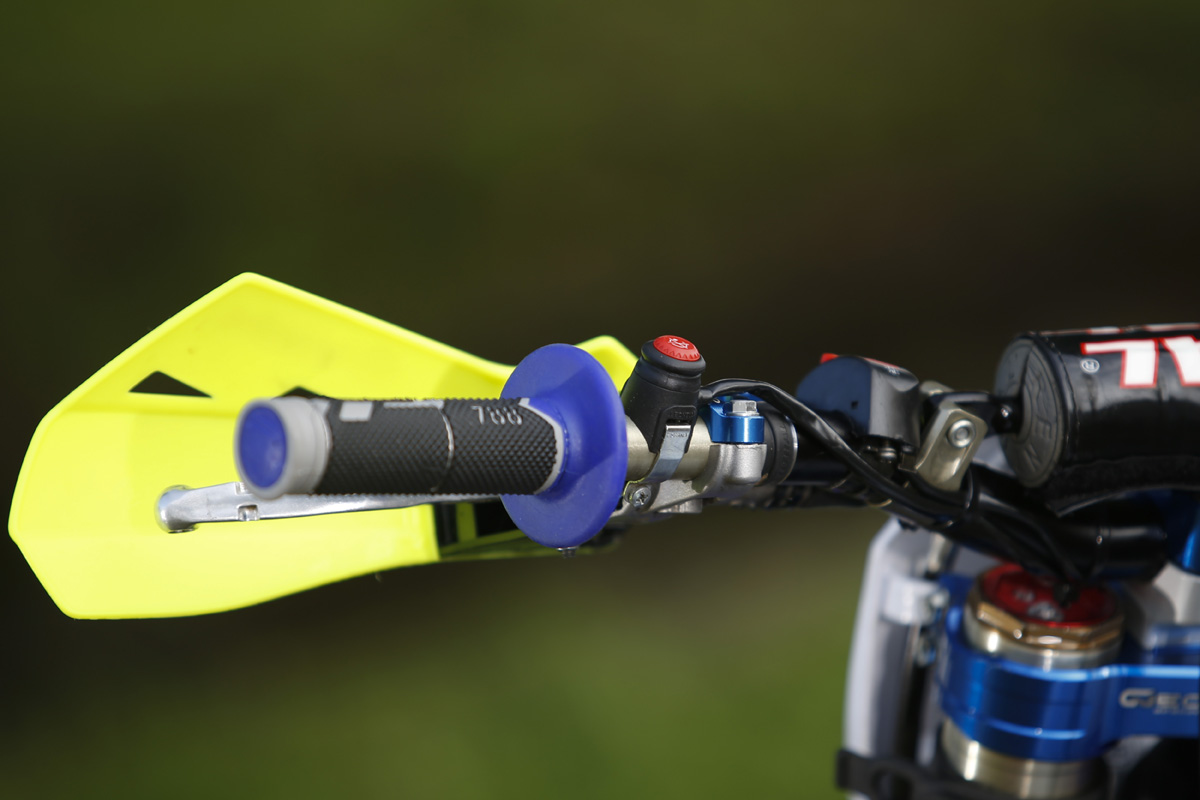 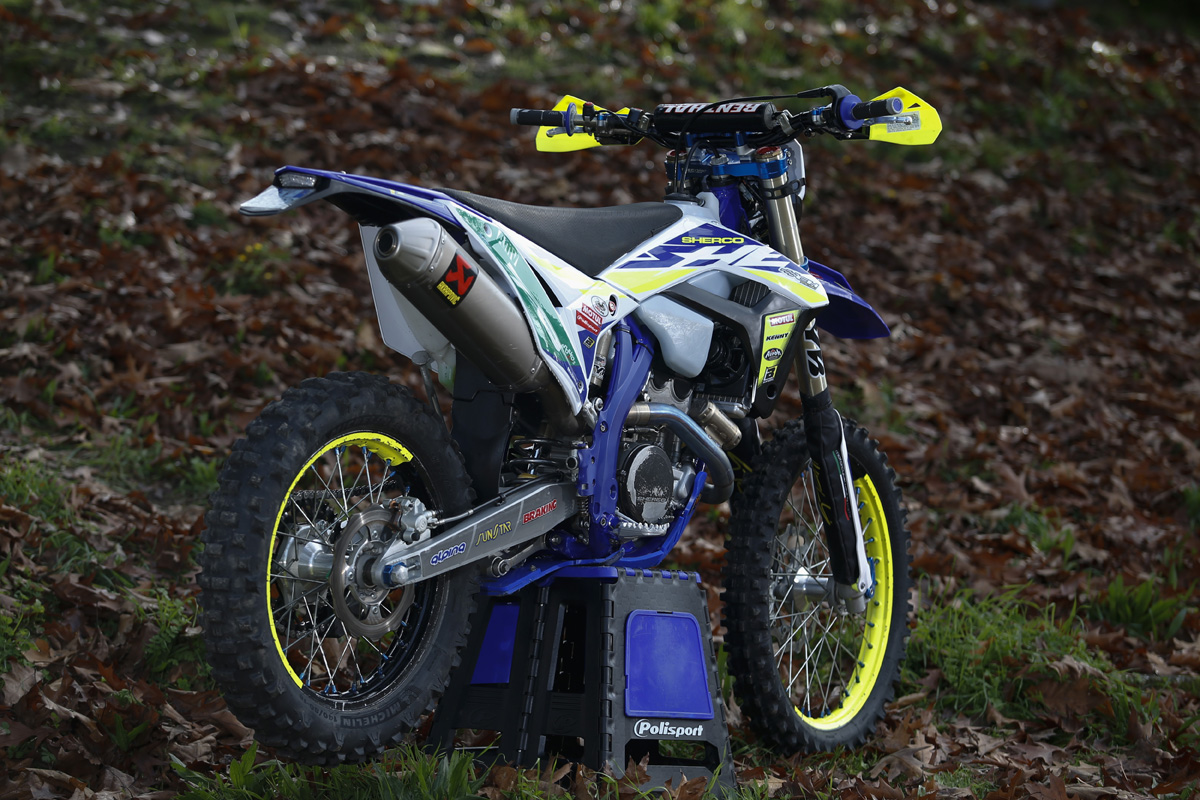 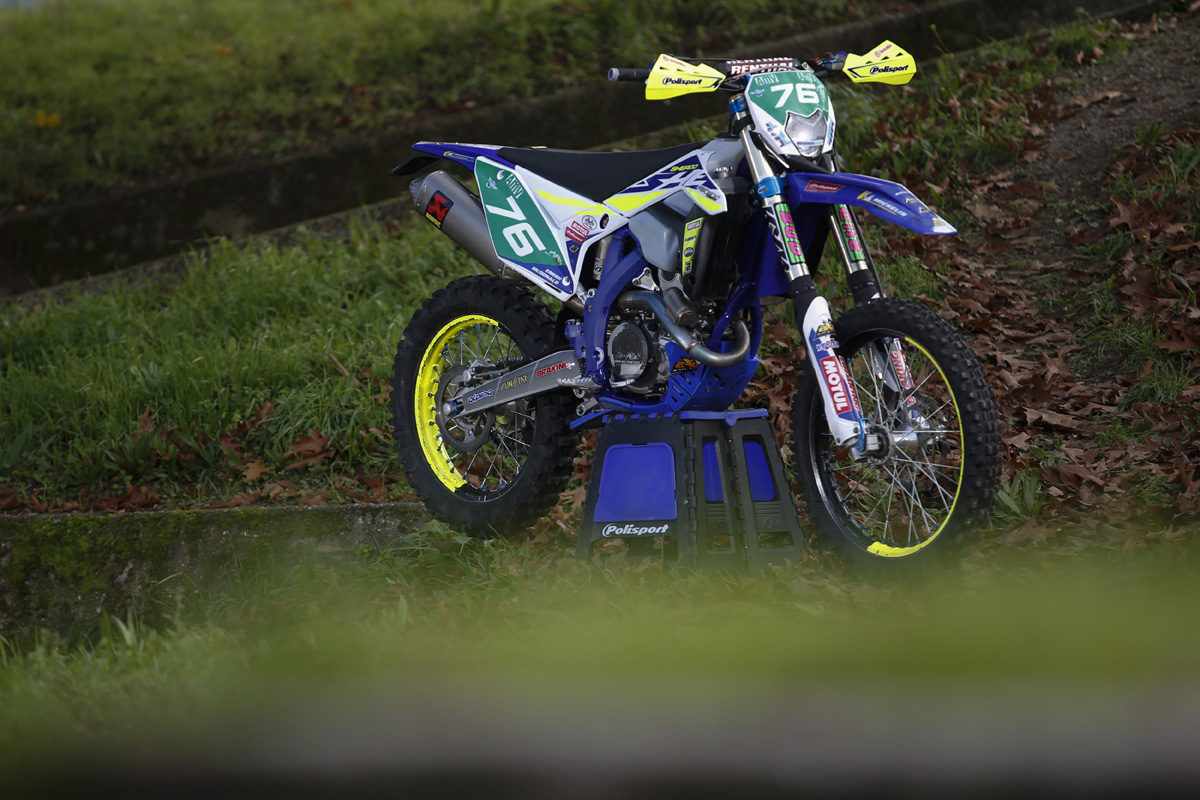 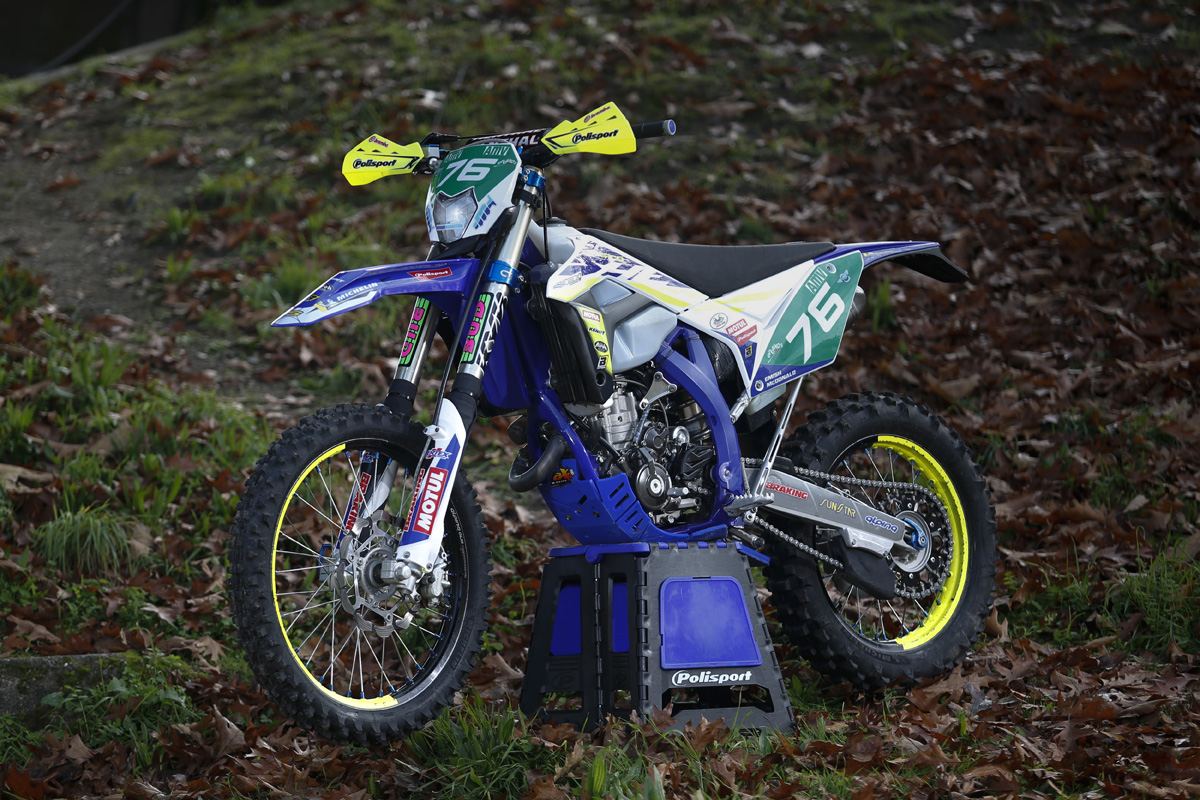 Continuing our detailed journey through the EnduroGP winning machines of 2020, we’ve turned the Enduro21 Pro Bike spotlight onto the Sherco SEF 250 which Hamish Macdonald took to the Junior World Championship title.

There were many unforgettable aspects about the 2020 EnduroGP World Championship season but a positive feature among all the downers was seeing a new generation of young riders asserting themselves. Sherco Factory Racing’s Hamish Macdonald was one of them.

On the back of a Youth World title in 2019, the New Zealander stepped up to the Junior ranks in 2020 and promptly stole the show with the Junior World Championship crown – in 2021 Hamish will step up to the senior ranks which will be a different story again.

As we catch up with Macdonald at the final EnduroGP of 2020 in Portugal he explains, “there’s nothing crazy about my bike. Anything you can see here you can do with your bike at home. I like it this way and it works perfectly for me.”

Also helping us out with the low-down on this factory weapon is “the trusted pair of hands” in the CH Racing/Sherco Factory Racing Enduro World Championship team, Victor Santolino. He’s a mechanic, technician, former rider and the guy behind SB2 Suspension which you will see on some of the factory Shercos including the TVS Rally bikes. 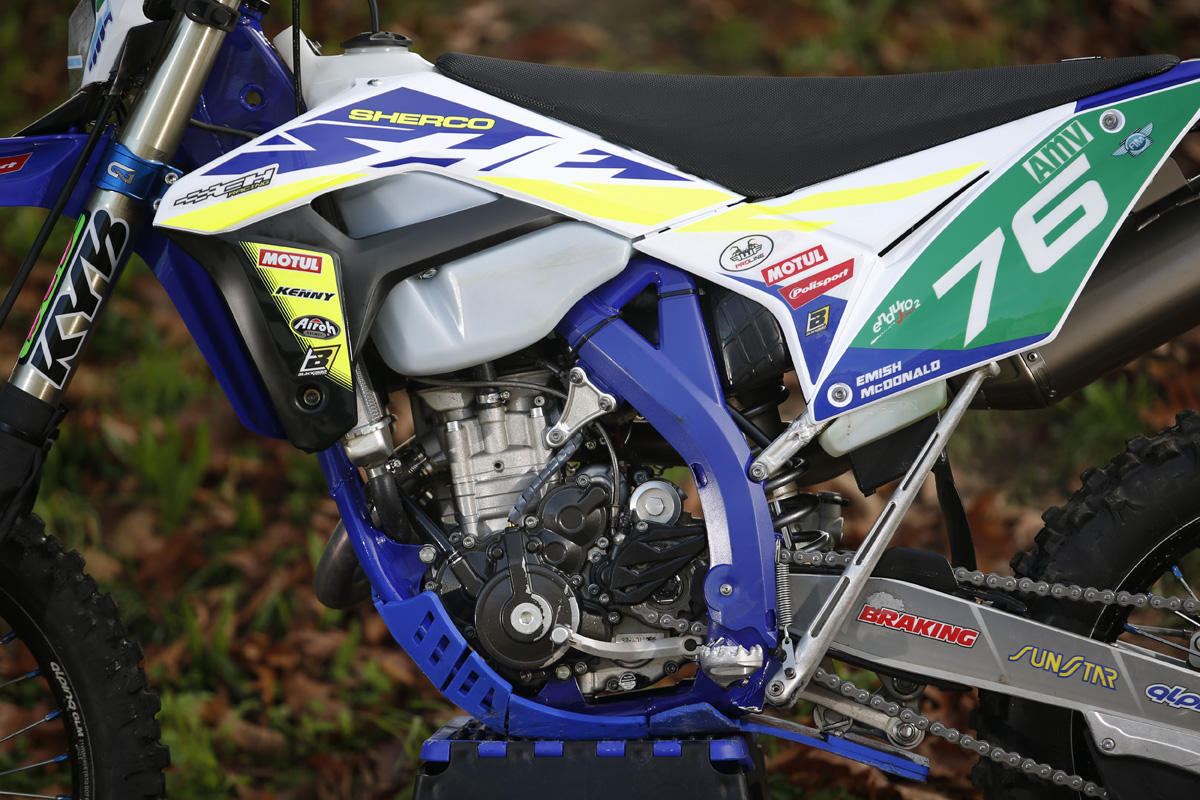 “Hamish’s bike is the 2021 standard base,” begins Santolino, “it’s the Factory model which this year had changes to the Akrapovic exhaust system and the graphics. That’s it. Really there aren’t any big changes from a race bike to the one you can get in a shop.”

As always, Enduro21 is keen to know how a factory race teamwork on the inside of their engines to get more power – especially on a 250 four-stroke where more power can make a bigger difference.

The reality in this case is very little – reliability is important so the engine is “basically standard” and has been “adjusted” internally but not with any big changes. Enduro21 felt a bit in the dark but they assured us there was very little to tell except the standard practice of race teams to hand-build the motors for precision and “clean-up” porting for free-flowing gases to increase engine response.

One thing is for certain, Hamish loves a good set of wheels and you’re not going to miss his bike in crowd. The non-standard rims on his 250 SEF are made by Alpina who are perhaps more famous for their Supermoto wheels sets. The forged rims and spokes are stronger than standard but are still mounted on the standard Sherco hubs. 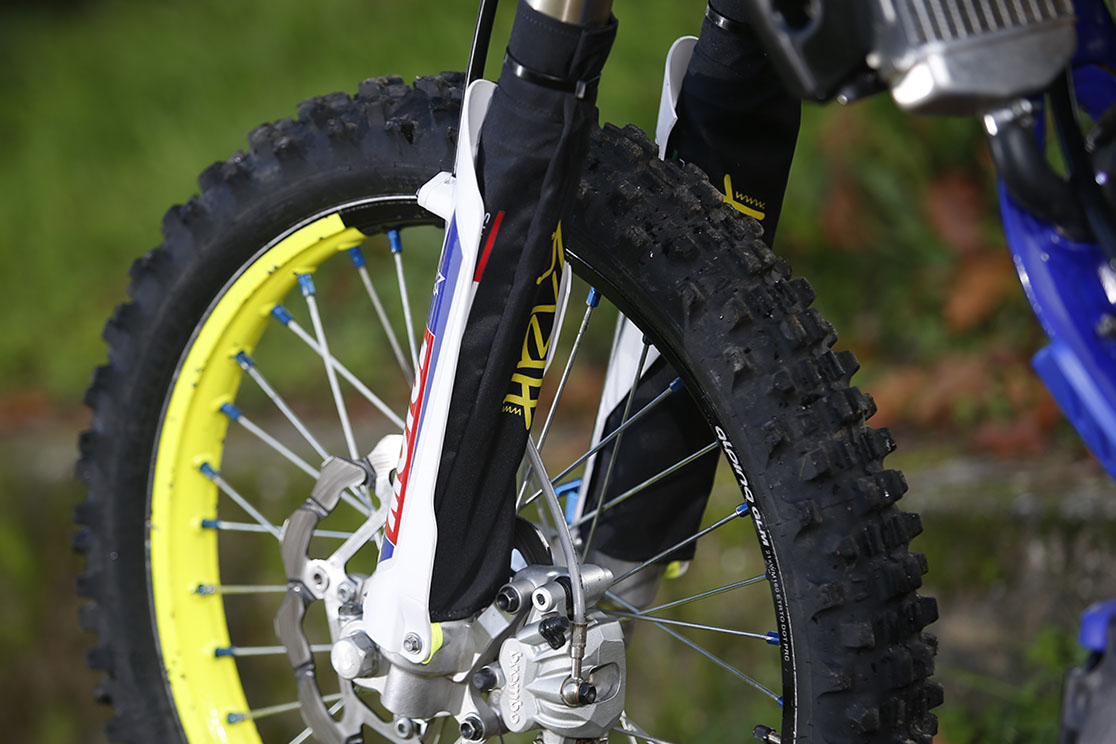 French specialists Bud Racing are in charge of the KYB front and rear suspension on most of Sherco’s EnduroGP team race bikes. Base set-up is the standard Kayaba components but uprated to match Hamish’s preference (and speed).

“The forks are a bit stiffer than standard,” he explains. “I run more oil and bigger springs but valving is quite similar to standard – the fork valving is quite good out of the box really.” Adds Hamish.

The shock absorber is a different story though and they have gone “quite hard” with a stiffer spring to match the forks and in Macdonald’s case, the valving is different than standard also.

Santolino explains Hamish’s switch from the Sherco 125 two-stroke in 2019 (where he took the Youth title) to 250 four-stroke in 2020 took some adapting to although the process was helped by the additional time afforded by Covid restrictions and a later GP season start.

“Hamish adapted pretty well to the bike coming from the 125cc last year.” Says Victor. “We started with the standard base bike, which he had out in New Zealand during winter (his summer) training, and worked from there on.”

“Mostly we worked on the suspension because that is what makes the rider feel at one with the bike really. That and the gearing really just so the rider can find where he wants the bike to work.” He adds. Chain, front and rear sprockets are from Sunstar and the final drive ratio is 13-48.

The team also runs the full AXP bashplate with the suspension linkage protector extending underneath. They also have a habit of running Hurley fork stanchion ‘socks’ in muddy conditions. The protective gaiters sit on the lower fork leg and help prevent fork damage and leaks.

Macdonald, like his teammates in the CH Racing team, runs a standard size front brake disc but the Braking semi-floating component. It’s an interesting, arguably non-conventional design that has just four mount bolts and every second pin (of six in total) is ‘floating’. “The front brake is a bit stronger than the standard,” Macdonald tells Enduro21, “and gives a pulsating feeling, it shimmers a little bit and I really like the feeling it gives.”

For “added security” Hamish runs a larger diameter, solid rear disc because, “I tend to boil the disk a lot,” he explains. “Being oversized helps prevent that. I like the feeling and security it gives me.” 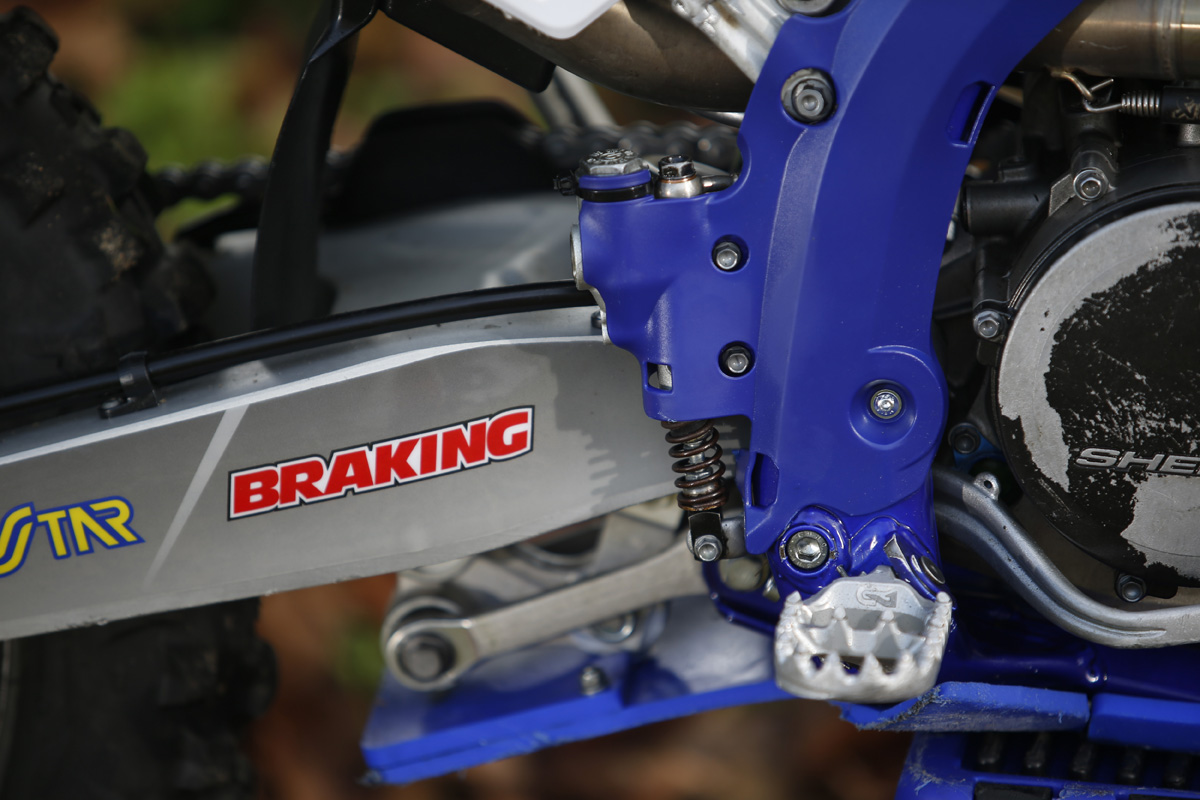 The Brembo brake calipers and master cylinders are all standard parts on the Factory edition Sherco SEF 250 except Hamish runs an additional, stronger rear brake return spring at the foot lever for added pressure pushing that lever back and to fight with his hasty right boot!

Like many of the bikes in the EnduroGP paddock, there are plenty of anodised parts on Hamish’s Sherco from the Italian parts specialist, Geco. “The triple clamps run the same off-set as standard,” explains Santolino, “they just have a more direct feel.”

Interestingly Macdonald runs the Geco clamps while his 2020 teammate and main championship rival, Theo Espinasse was running Neken triple clamps – it points to a team not necessarily tied to one solution but rather the best solution for each rider to gain the set-up they want for their bike.

Sometimes with factory bikes it is the unseen elements which are most fascinating and Macdonald has a less obvious chassis tweak up his sleeve. Or rather under the seat of his pants in fact in the shape of a cut subframe.

Cutting the subframe to make it sit slightly lower, “gives the bike a nice and flat feeling.” Says Hamish. “The lowered subframe also gives me more traction, especially when I power out of the corners.”

Those personal touches and preferences for a flatter bike are also clear up top with the Renthal handlebars. “They are the Renthal 996 bend,” Macdonald points out, “and I also run 5mm lower than standard handlebar risers as well to have a more direct feeling.” The team and indeed the standard Factory edition Shercos, run Polisport handguards and Pro-Grip grips.