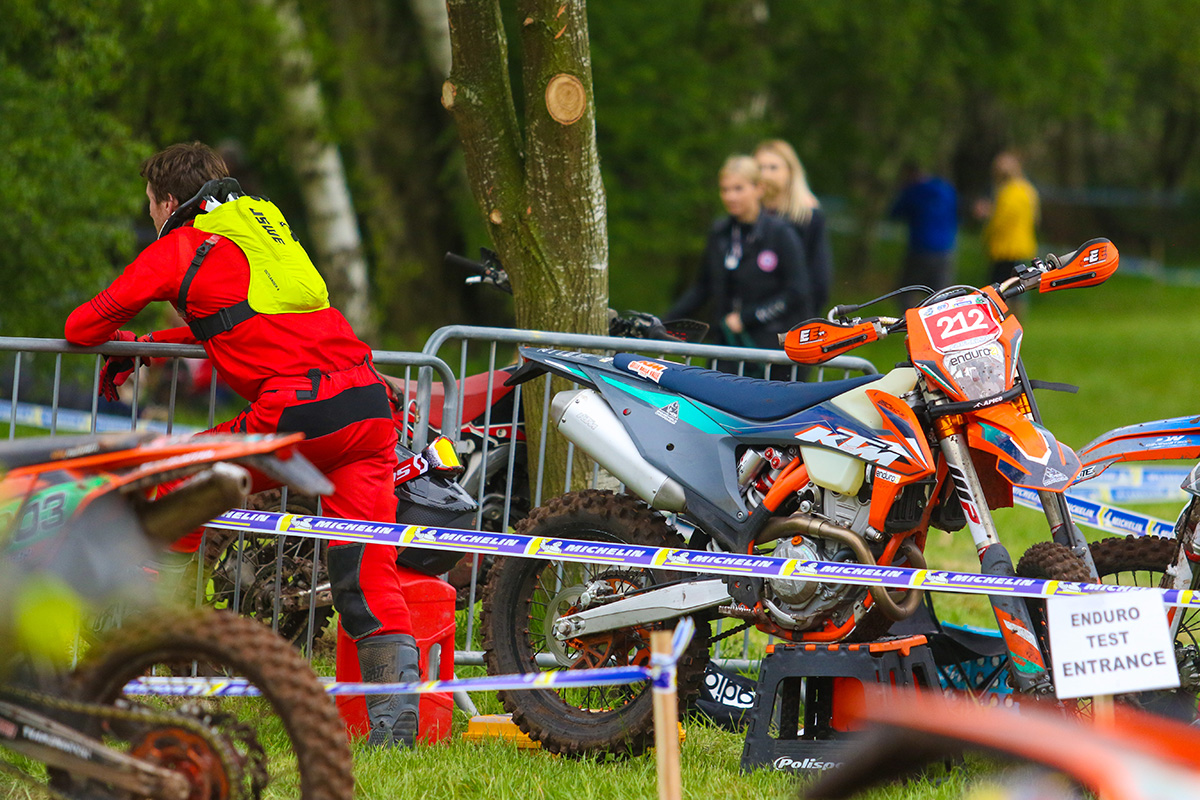 What 3hrs of hard, Cross-Country Enduro did to our KTM 350 EXC-F test bike

When we signed up for the Original Fast Eddy Cross-Country Enduro at Hawkstone Park we knew it was going to be hard work. Three hours of XC racing is always a tough call for bike and rider on a sandy track beaten by hundreds of riders across a whole weekend, things turn brutal. It’s what GNCC racing is all about but it is by no means exclusive the USA – Europe does this stuff too!

The 2021 Hawkstone event saw Enduro World Champion Steve Holcombe take victory ahead of Billy Bolt and Jack Edmondson. They were the top trio on a very long list tackling the sand, rocks and roots at the famous hillside venue.

Enduro21 was in the thick of it too, taking the long-term test KTM 350 EXC-F WESS to an event which, when the bike was born on an Austrian production line, was part of the now defunct WESS series. It felt natural to still get this Cross-Country special edition bike to a major XC event and because it says Hawkstone on the rad shrouds this was a must-do.

That’s the background but what happened to the bike? Rather than tell a story about a race, we wanted to break down the 350 EXC-F’s story, how it stood up to it all, what was good, what fell off and how hanging it was after a weekend’s punishment…

The first thing to say is nothing major happened mechanically during the race despite the hot and brutal riding conditions. The bike never missed a beat but two issues plagued us, robbing time and ultimately both were avoidable.

Somewhere in the first two laps the split pin holding the left side Raptor Titanium footrest made a run for it allowing the main retaining pin to make a bid for freedom – I felt the footrest had dropped with my foot when the pin started to work its way out. 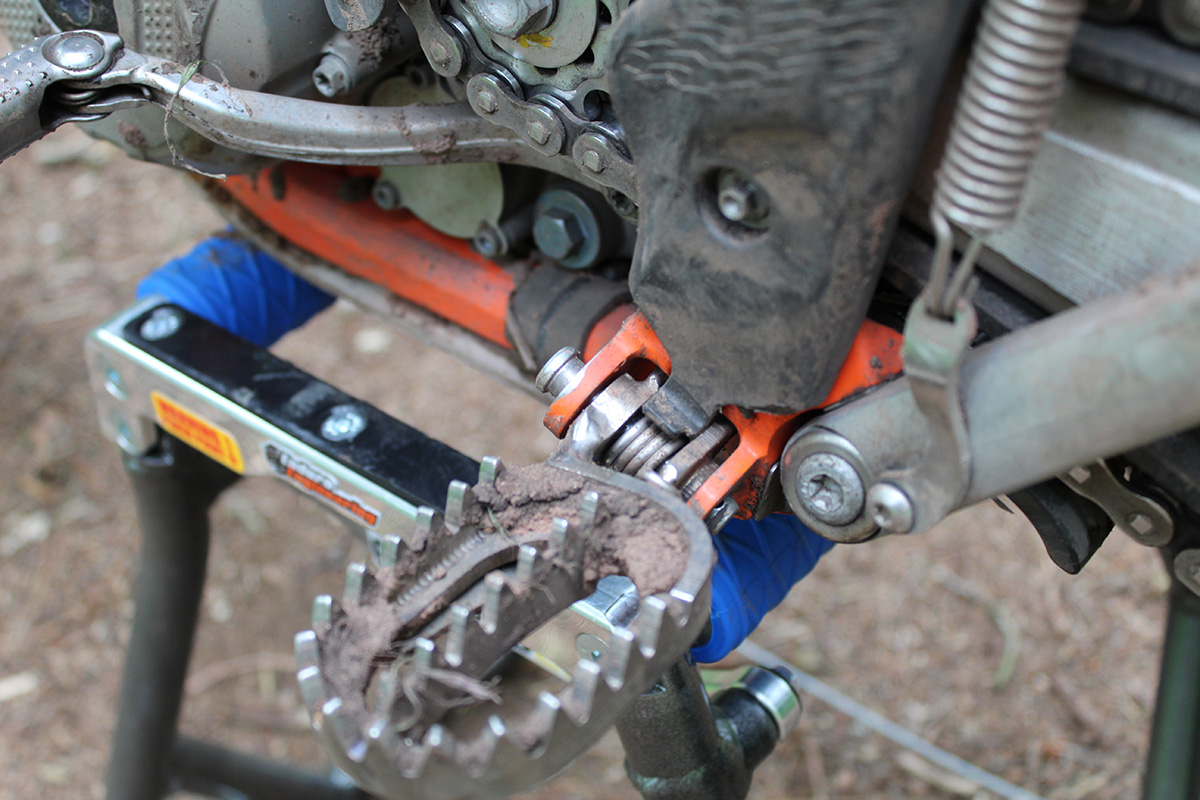 The factory teams and KTM itself put the pin through the opposite way, bottom upwards on that side partly so the sidestand does not foul on the split pin and washer. Personally though I have always put them in from the top side and this race proved the reason why. Even with no washer and split pin, the footrest did not fall off.

Here’s a lesson learned though: when I got to the pits, I had no new split pin or washer in my spares kit. I spent a good five minutes trying to cobble something together and ended up using a bit of wire through the split pin hole but it was pretty a hopeless solution and wasted a load of time for nothing in the end.

In future my little spares box trackside with have washers and split pins in case this happens again.

Not for the first time I had the back brake lock solid on me part way through and for a while I thought the race was over. I’ve only got myself to blame.

In the first two laps the rear lever was too low and I kept missing it on the steep downhills, one time tipping off when the front washed out. So when in the pits for the footrest issue (above), I gave the adjustor on the rear brake lever a turn. 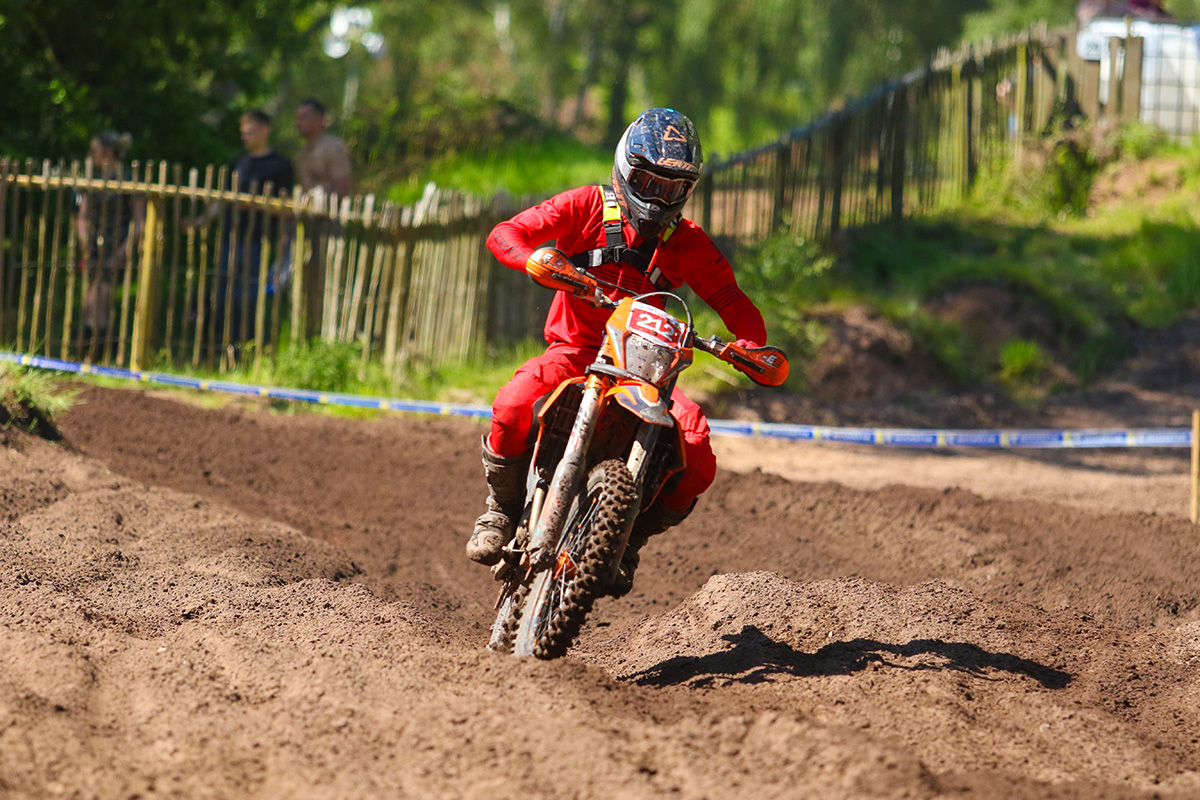 Can you guess what happened next? Not even half a lap later it became clear I’d given it too much and basically couldn’t ride because the back brake was locked solid. It was a rookie error made in haste while in the pits.

I dragged the bike off the track (it wouldn’t ride because the brake had got so hot) and tried to think of ways to either cool it off or free it up. It didn’t help that this was a part of the track where literally no-one was around.

This is where lesson number two comes in. I carry a little t-bar with 8mm and 10mm sockets on an event like this but not a spanner and that meant I was up the creek.

I was at the point of either walking to the pits when one of the event officials appeared like an angel out the woods on his quad (a big, beardy bloke of an angel it must be said). Luckily, somewhere in the depths of the quad tool kit was an open-ended 10mm spanner and I was away – I owe that man a drink.

It’s not unusual to find at least one thing come loose in a rough, three-hour race is it? I do my best to avoid it in the workshop by checking everything and using a dab of threadlock where appropriate. But I must have been a bit tardy before this race because subframe bolts and the AXP chain guard/rear sprocket protector were loose by the finish.

In both cases I only noticed when I got home though luckily they stuck it out for the race.

These are the tyres that won the ISDE in 2019. New at that time, they are the latest FIM-spec enduro tyre from Dunlop and long overdue a test on Enduro21. Hawkstone Park is largely sand-based but with a load of large stones and roots which get more exposed with each lap it, this is a tough place on tyres and mousses.

Dunlop’s EN91 front and rear with standard medium mousses fitted the bill. I’ve used a very similar set-up from Michelin at this track before and the feeling is pretty similar in reality – both are recommended. 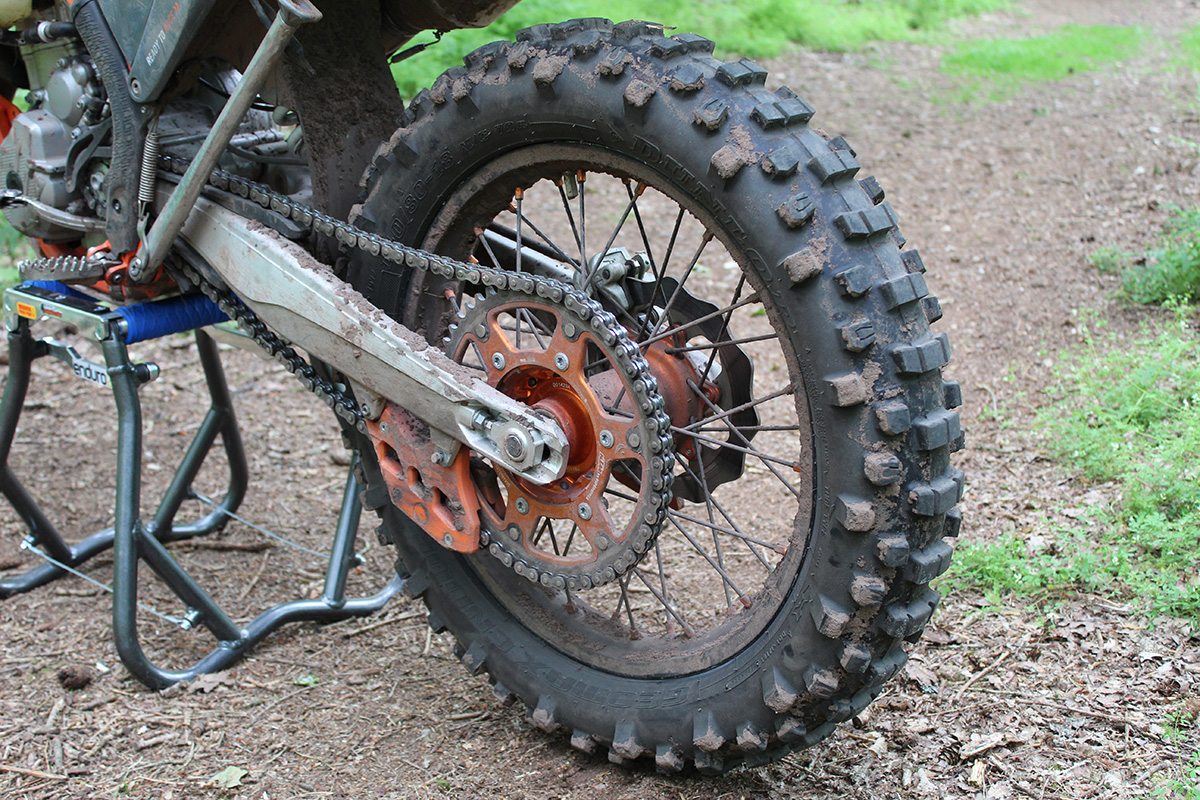 The EN91 is only available in one compound, medium, but it is a versatile ‘medium’ and that makes things simpler. What that meant at Hawkstone was good feel and flex over the rocks and the horribly-angled roots in the track. I felt I had good control of grip, especially on the roots. On lap two when a whole heap of riders were stuck on a slippery rocky climb, I chugged my way through finding grip from the rear too.

They are also robust enough in the carcass to handle the faster, fourth and fifth gear sections where you’re hitting things harder and need the tyres and mousses to be stable as well.

Like I say, these are the tyres are mousses that won the ISDE 2019 with Team USA and that should be more than enough proof of versatility in all conditions but it was also great to prove it to myself as a regular rider.

If you want to test an air filter, this is as good a race as any with dry and dusty sections as well as some real sloppy mud in the woods. The FunnelWeb Proline did the job and kept the 350 sucking cleanly right to the finish.

I can’t stress how much of a difference having the WP XPLOR Pro shock absorber and forks made at this race. I’ve ridden the venue on different bikes including stock WP equipment and it makes such a difference in terms of confidence to hit things and how I felt at the end of the race. 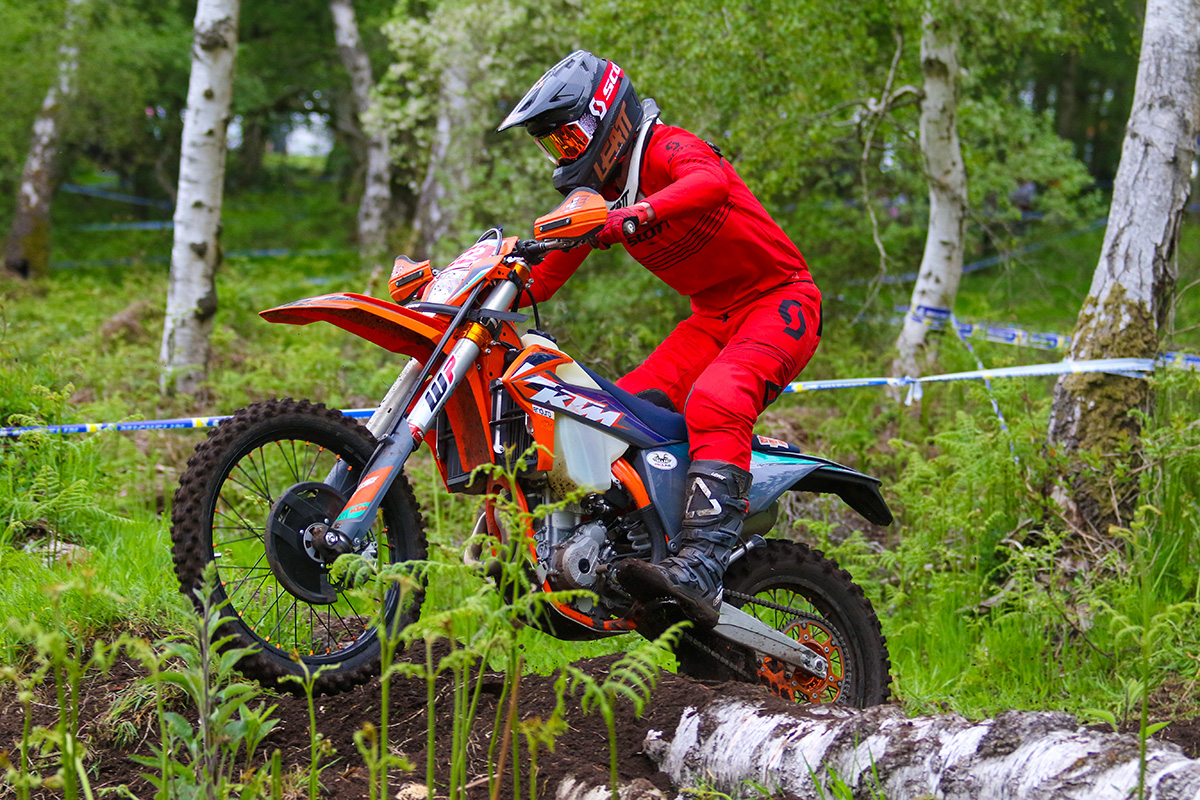 Simply the forks stand up to anything the track dishes out including the massive Hawkstone jumps and my late in the race tired stumbles into stuff. The shock stayed consistent through the three hours too, despite getting mighty hot in the heat and punishment dished-out by the horrendous track conditions. I felt better at the end of the race and had way fewer blisters too.

Getting your monies worth out the grips

These are the original ODI grips that come with the bike. They’ve lasted pretty well for 35 hours and I’m a total convert to riding with grip donuts to stop thumb knuckle blisters which have plagued me in the past. The grips are just bedded in some would say! 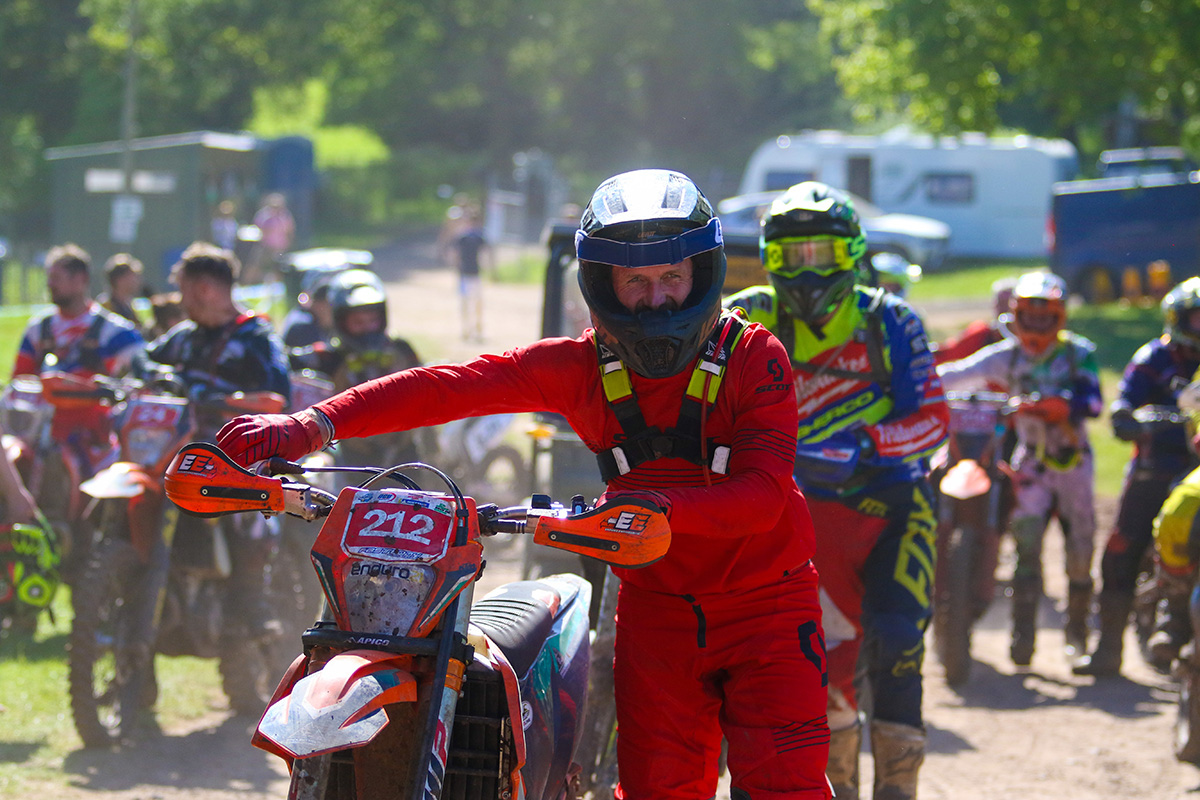 Hawkstone was a tough test but an awesome event which suited the 350 and the only thing left  hanging at the end was the chain. A bit more homework is needed in the workshop next time though!

The whole concept of this model from KTM was to be the cross-country version alongside the Erzbergrodeo edition, 300 EXC two-stroke. It fits the bill and although the bike is obsolete in some ways, it doesn’t matter.

This brings an end to our time with this long-term test mule sadly. It’s been a blast.