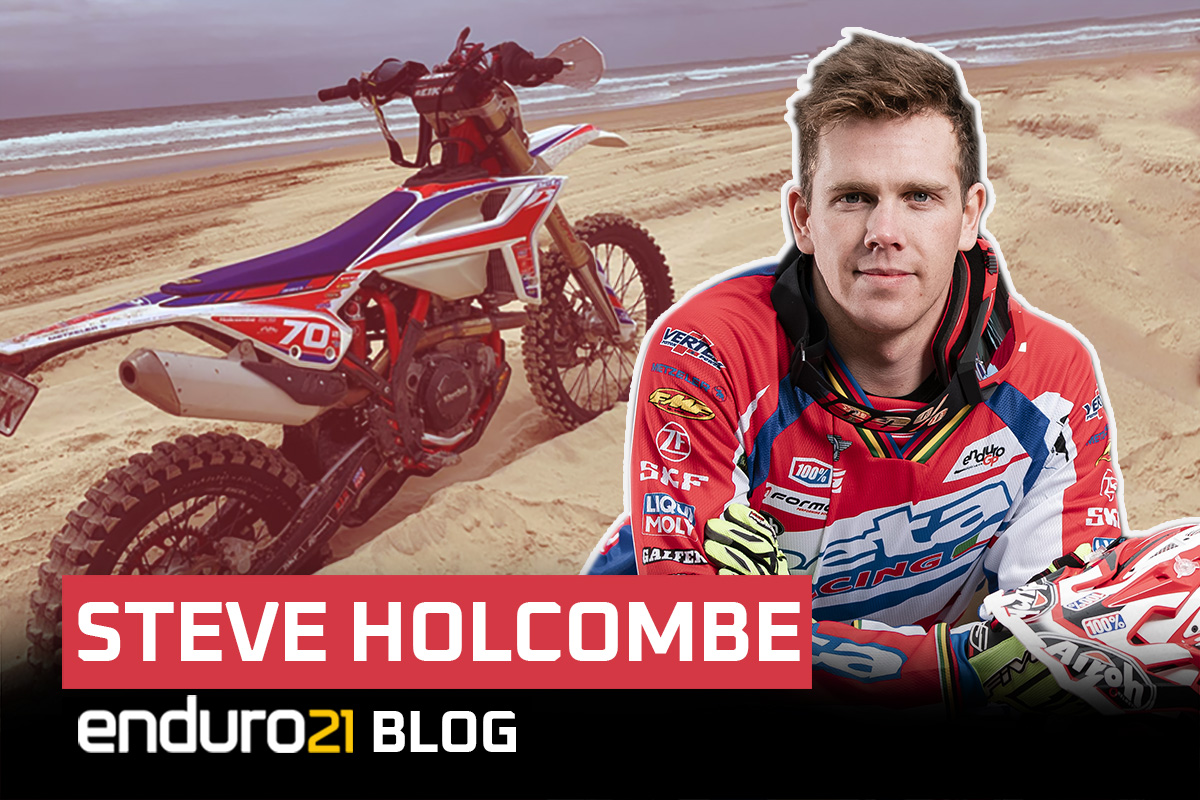 As we move forward into the New Year, Enduro21 is proud to welcome five-time Enduro World Champion Steve Holcombe as our latest contributor…

A belated Happy New year to everyone!

First things first, my resolutions – pretty much the same as every other year, to try and win some more races and titles, but also do it on a different bike - a four-stroke (still a Beta of course!). Oh, and to well and truly put the Epstein-Bar virus behind me.

Deciding to have a go at this column wasn’t a difficult decision to make. It’s something I’ve been thinking about for a while now, a great opportunity for me and somewhere I can properly check in with everyone, share some thoughts and possibly sound-off a little, whenever needed. I’m not sure what I’ll do most of, but I’ll promise I’ll do my best to keep it interesting.

It’s January, so we’re still a long way out from the EnduroGP season opener. My plan is to fill you in on what’s happening with my racing plans for 2020 and my switch to a four-stroke, but right now I wanted to bring you up to speed on my off-season.

As is now tradition for me, I’m kickstarting January on the opposite side of the world. After a couple of years in New Zealand, I’ve decided to travel to Australia. I’ve loved my time in Queensland and seeing the islands, but I felt it was time for a change. And so here I am.

As I write this, Australia is making headlines around the world because of the national emergency it’s going through and the horrendous wildfires. Thankfully, I’m not in those affected areas, but it’s impossible not to be moved by what’s happening.

My thoughts are with those living through the nightmare of it all. Fingers crossed everyone keeps as safe as possible.

Australia is absolutely massive. Of course, I was aware of that, but it’s not until you set foot here that you realise how big it is. Living in England and travelling as much around Europe as I do, you feel like that is pretty sizeable, but it’s not near to scale of Australia.

One of the reasons I’m here is because I’ve met up with my good mate Jemma Wilson to help host some training schools she’s organised. We go way back to our early days of EnduroGP and it’s been cool to hang out again with her and her husband Jon.

Although she says she’s retired, she’s still top class on a bike and a proper character - it’s funny to see her in full Aussie mode on her home turf.

Jumping from the role of racer to teacher, I’m now trying to figure out how I do those things and translate that into practical examples.

To be honest I’ve never really done many training schools before this - it’s something I’ve been interested in, but due to racing commitments never had the time to commit to.

As a racer, you kinda just do what you do and are always looking for that extra tenth of a second here and there to be better and faster.

Jumping from the role of racer to teacher, I’m now trying to figure out how I do those things and translate that into practical examples.

Often, I might do something on the bike to gain an inch here or there. Smooth a section out and not think about it, but now I’m explaining why I’m doing it, as well as how I do it. It’s interesting - I hope for the riders as much for myself.

It’s cool to see riders improve on a corner or jump that has been holding them back. You can really see their confidence build as each day progresses.

They may not always be hugely faster but becoming more confident in what they are doing is the real win. I think people forget that a lot.

Everyone is so focused on being faster that they forget that actually working on being more fluid and confident in your riding will develop you into a better rider and ultimately a faster one.

Speed is nothing without consistency and the only way to become more consistent is through confidence. Coaching is definitely something I’d like to continue doing and a few years down the line consider doing more of it.

As a racer, you kinda just do what you do and are always looking for that extra tenth of a second here and there to be better and faster.

While I love racing and love winning even more, I always feel that what I’ve learned along the way is worth giving back to those finding their feet in the sport. It would be cool to help those young guns coming up the ranks to avoid some of the pitfalls I’ve met head on.

If anything, these few weeks have given me food for thought on that. I’ve got a couple of weeks left in Australia where I’m hoping to get some quality riding done. Then it’s back home and on with the preseason training.

For this month I’ll leave you with a few numbers that I’ve put together from 2019. I find it interesting to put stuff like this on paper and use some of them (the good ones!) as targets to beat.