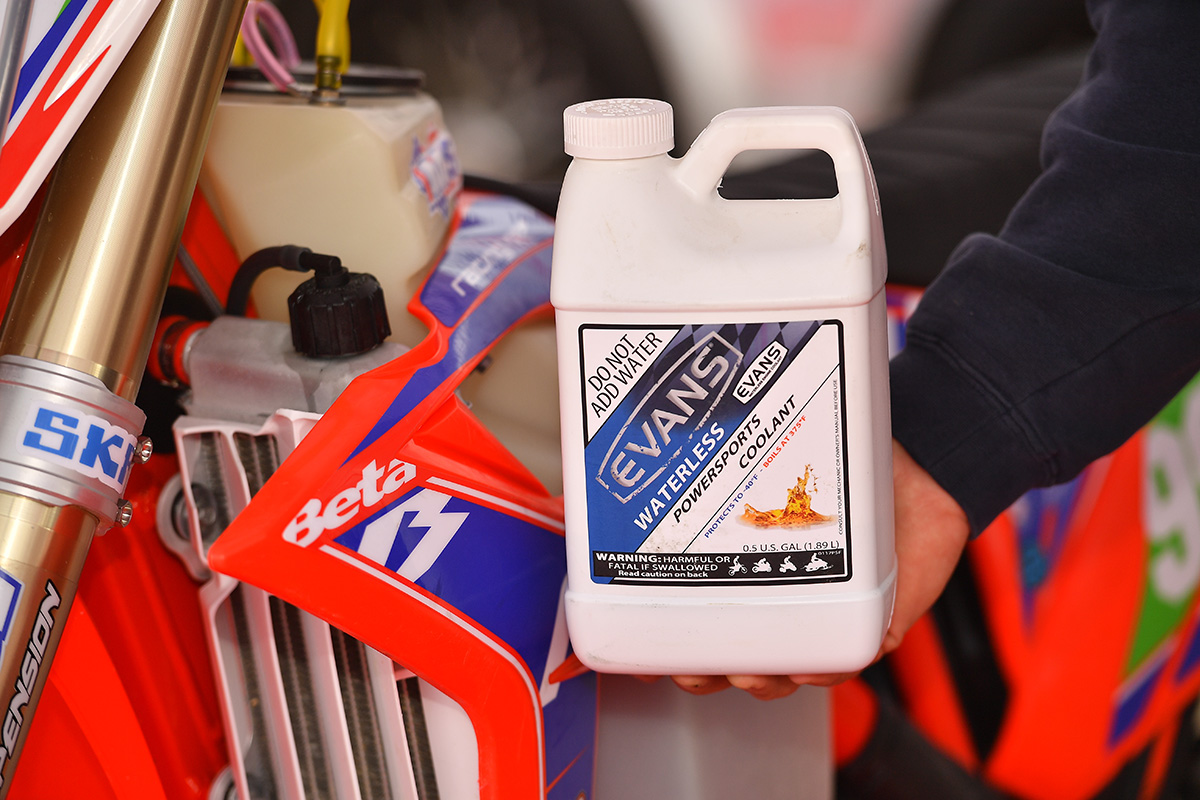 Worth a look: Evans Waterless Coolant

Enduro and Off-Road riding puts a huge strain on dirt bike cooling systems – this much we know. From radiators caked with mud during three-hour cross-country races to clutch-frying, uphill climbs in an extreme enduro, we sure ask a lot of our engines. And, as many of us know only too well, the consequences of boiling a bike over are never good.

Evans Waterless Coolant claims to remove the stress associated with over-heating your engine. A product that’s been on Enduro21’s radar for some time, we decided to find out a little more about the high-boiling point, anti-freeze, anti-corrosion fluid that claims to last the lifetime of the engine.

First things first, why is a high boiling point so important?

John Light: “The boiling point of a coolant is really its failure point. When people talk about their “engine temperature”, most likely they’re referring to their coolant temperature. If they see 220F, things are fine, but if it goes to 230F all of a sudden there’s steam coming out, the engine’s detonating, and generally running poorly.

“The metal in the engine can withstand a 10 degree rise in temperatures, but that’s all it takes to push the antifreeze past its boiling point. The steam inside the cooling passages pushes liquid coolant away from the metal, causing temperatures to spike by hundreds of degrees. These are the hot spots that cause detonation. At 230F, or even higher, Evans remains in its liquid state, always allowing the metals to dissipate heat and keep the metal temperatures under control.” 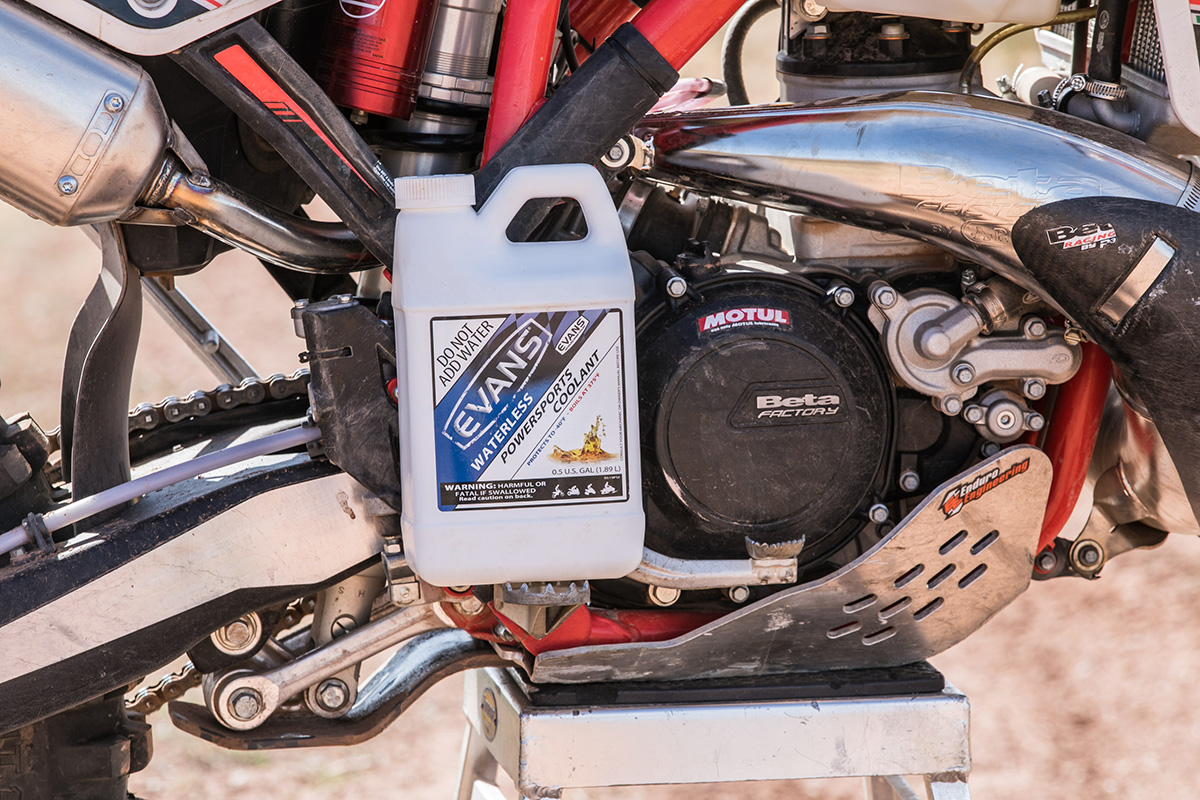 What happens when temperature get too high?

“Head gasket failure happens when the head warps a little and the torqued pressure on the mating surfaces becomes uneven. This is again a function of steam in the cooling passages. Whether it’s a two-stroke or four-stroke, boiling will start on the exhaust side of the cylinder head because that’s where it’s the hottest. With the metal temperature on that side going up so much compared to the cooler intake side, the head warps.

“If you put a head in an oven and heat it up evenly, it won’t warp regardless of how hot you get it. Evans can help manage metal temperatures and eliminate the risk of damage because the coolant remains in a liquid state. This prevents metal temps from spiking out of control.”

OK, great, but are there any downsides?

“The price point can be a bit discouraging for some users (Evans Powersports Coolant is $29.95 for half a gallon), but the long term advantages usually outweigh that cost. The draining process is a little more involved too, as a deliberate effort must be made to ensure the removal of water-based coolant.

“However, other manufactures also recommend a thorough flush prior to any coolant swap to avoid cross contamination. Over flush process just happens to be for the sole purpose of removing water. Our biggest concern with any type of cooling system failure would be a plastic part. Some examples of those would be a plastic water pump impeller or a plastic Y hose fitting. This is typically a failure we see under extreme conditions for long durations of time (hard enduro, muddy hare scrambles). These concerns can easily be fixed by upgrading to metal components and silicone hose kits.” 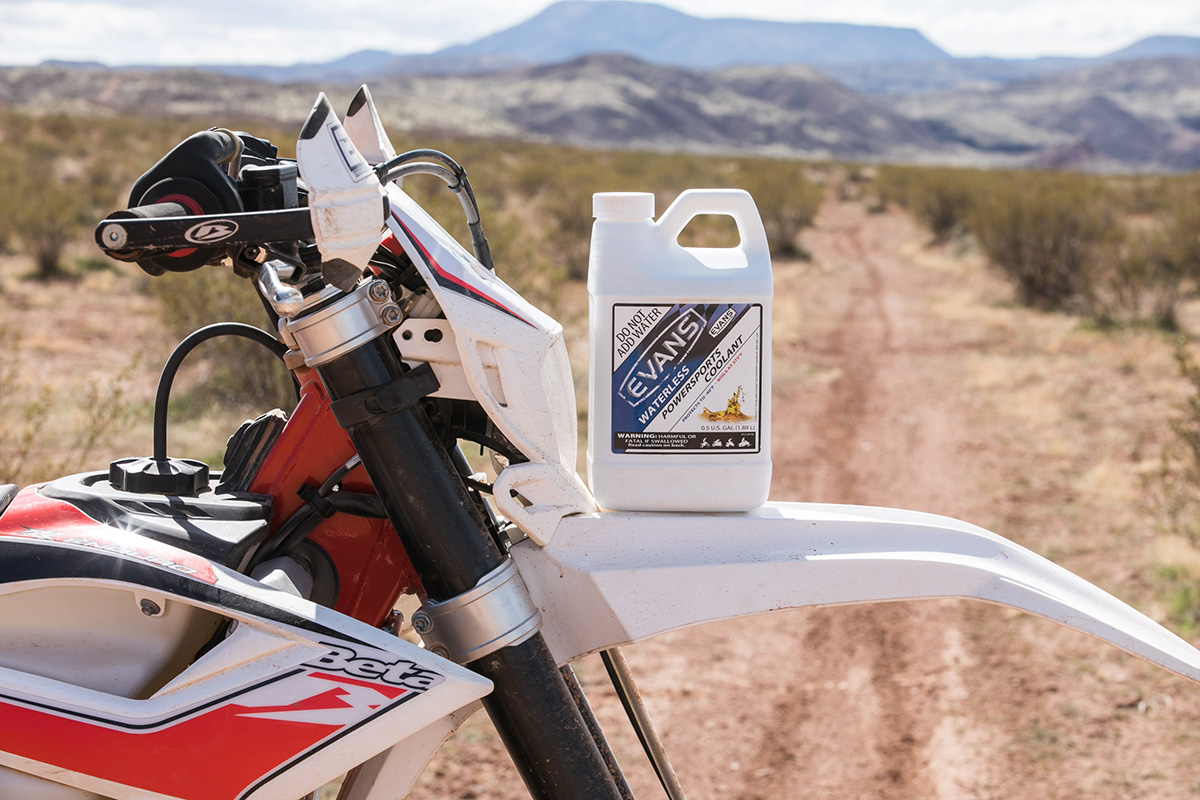 “There are so many teams and riders it’s impossible to count. In the past, several teams used Evans but didn’t admit it, for fear of exposing their “secret advantage”. The GNCC is a good example of a series that almost requires our coolant due to the length of the races and they always have mud sections somewhere on the course which can cause radiator caking.

“Evans remains a liquid even when the radiator is caked with mud, so it’s one less thing a racer has to worry about. Evans is used by Honda Racing including the Rally, MXGP and RedMoto Enduro teams, AmPro Yamaha, Beta Factory, Tely Energy KTM, Pheonix Honda, Coastal Racing, Lunova Racing.”

As far as installing Evans coolant is concerned, what happens if any water or old coolant remains in the system?

“Evans Powersports Coolant is a special blend of glycols, and additives, and if the water content is too high, it will perform like water-based antifreeze. With excessive water content the benefits will be compromised. That said, in an emergency, water can be added to get you home without any issues.

“Evans Prep Fluid can be used to rinse the system of residual fluids, but it may not be necessary for a dirt bike. A 450 will only take a little more than half a bottle of coolant, so you can use a cup or two of coolant itself as a rinse. Blowing air in the radiator helps force the old antifreeze out as well. Evans recommends the water content is below 5% for optimal performance.” 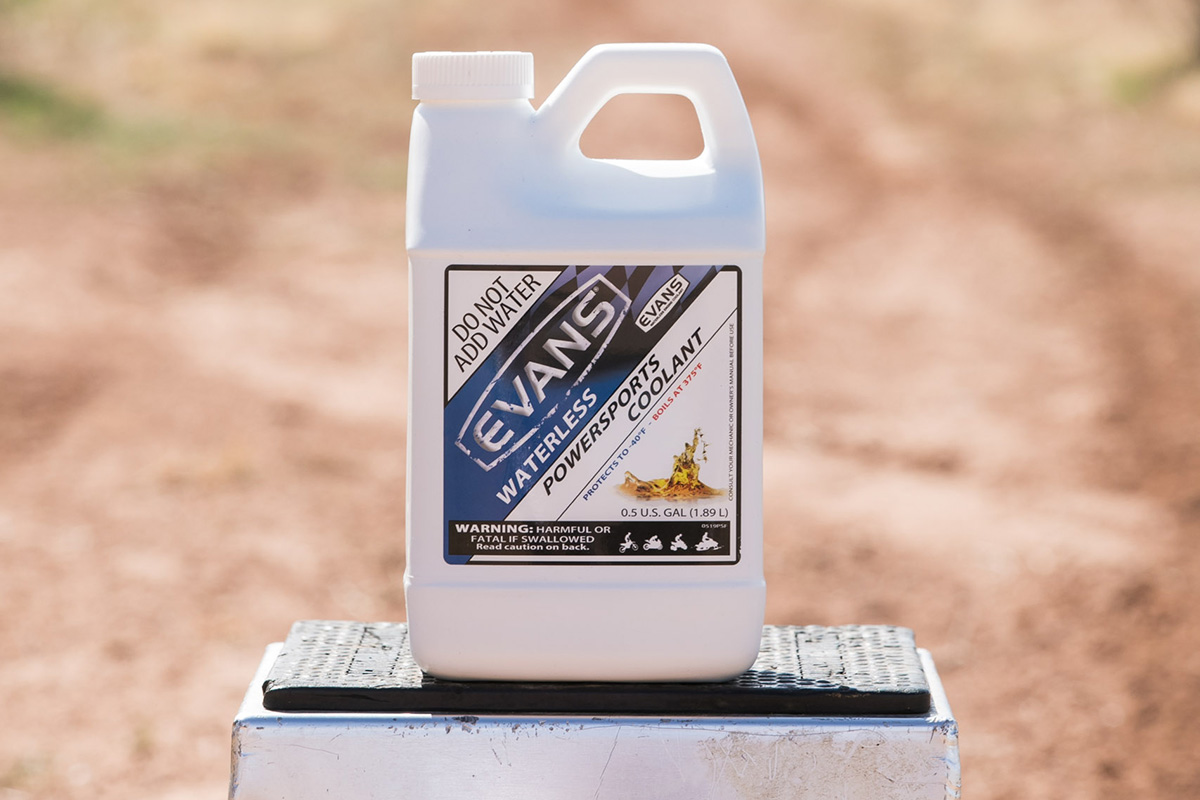 Enduro21 hasn’t tested Evans Waterless Coolant yet, but we’ll be getting some soon and will report back when we’ve put it to a proper, real world test.