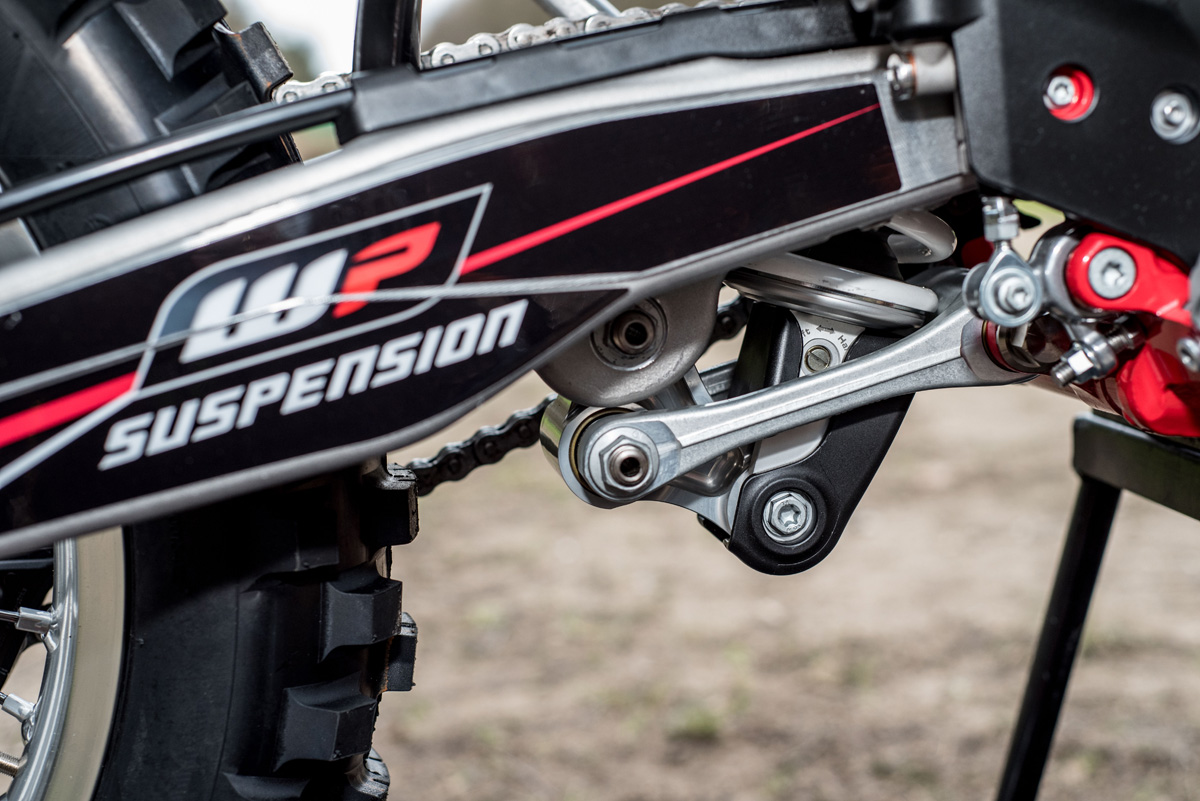 From Cone Valve and Supertrax technology, new fork cartridge kits and shock bladders, the WP Suspension Pro Components range has a lot going on. Enduro21 takes a closer look at WP’s Enduro range to find out how it works and what all those letters mean.

From their beginnings in the 1970s, Motocross World Championships in the ‘80s and even Formula One world title with Michael Schumacher in the ‘90s, WP Suspension have a whole heap of history.

The fact is wherever there’s a factory KTM, Husqvarna and lately also GASGAS, WP Suspension development is happening. Factory R+D leads to the products the rest of us can buy and fit to go riding and racing at the weekend and that is where this guide comes in.

What is out there for the average enduro rider and what can you actually bolt on to your enduro bike from the WP range? Enduro21 takes a look…

XPLOR? XACT? AER? What does it all mean?

You could probably guess from their name that WP love a good acronym. We’ve taken a quick walk through the list of letters you’ll find stuck to the side of WP forks and shock absorbers to help understand. 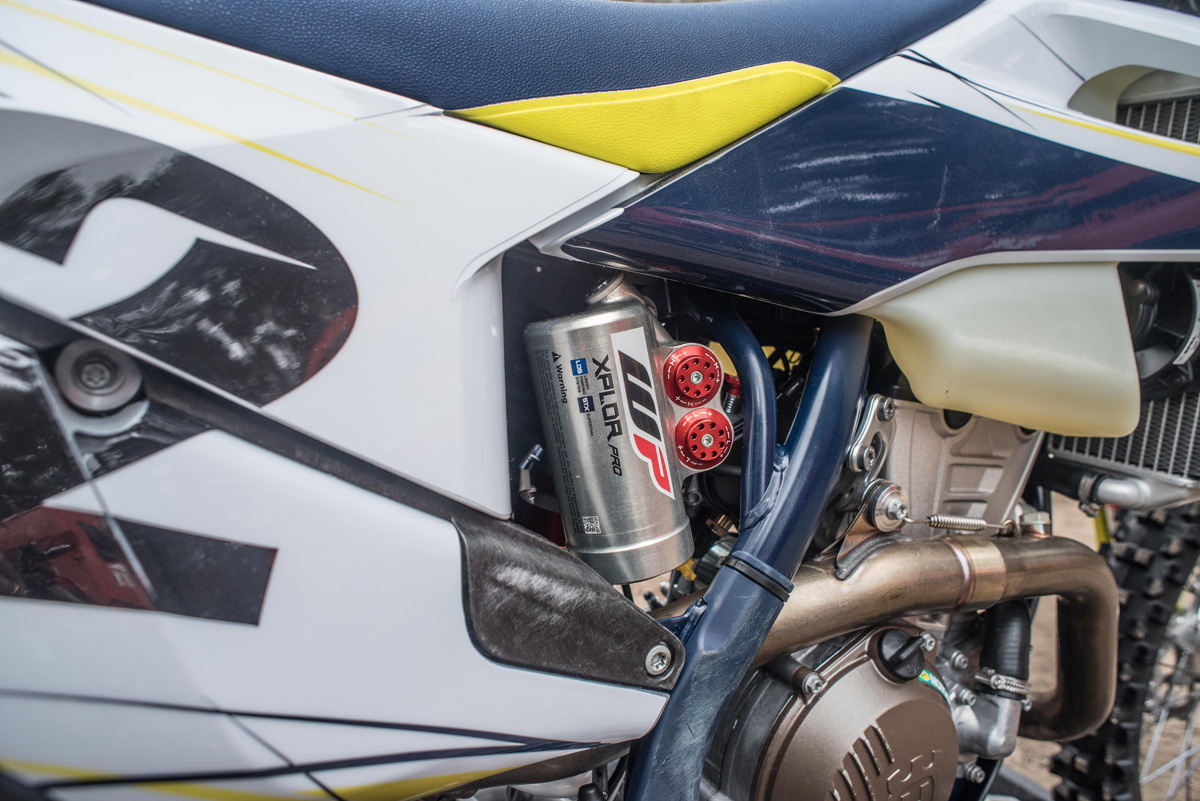 XPLOR is the name you’ll find as the original equipment on all enduro/off-road machines, XACT is OEM on motocross bikes. Where that sticker on the side of the fork or shock unit also includes the word PRO in black it is the upgraded part from the Pro Components range. Where that Pro sticker is red however, you’re looking at the Factory Racing equipment which in theory money cannot buy.

What about Trax and SuperTrax (STX)? We’ve gone into some detail below but simply it is the name for the internal damping system in the shock absorber. Similarly Cone Valve (CV) is the description for the internal design of the forks, some of which have an open cartridge (OC) while other have a closed cartridge (CC).

AER is air technology in the air (no spring) forks. PDS is the no linkage ‘progressive damping system’ rear shock unit fitted to KTM EXC models – LDS is the ‘linkage damping system’ on Husqvarna and GASGAS models.

The latest version of the XPLOR PRO shock absorber is based on the Trax shock which you may have heard of, seen on bikes or already be using. It has been around a while.

From the outset, Trax was simply designed to improve traction. While the terrain is trying to throw your bike in the air and keep the wheels off the ground, your suspension tries to combat that with springs and damping valves. 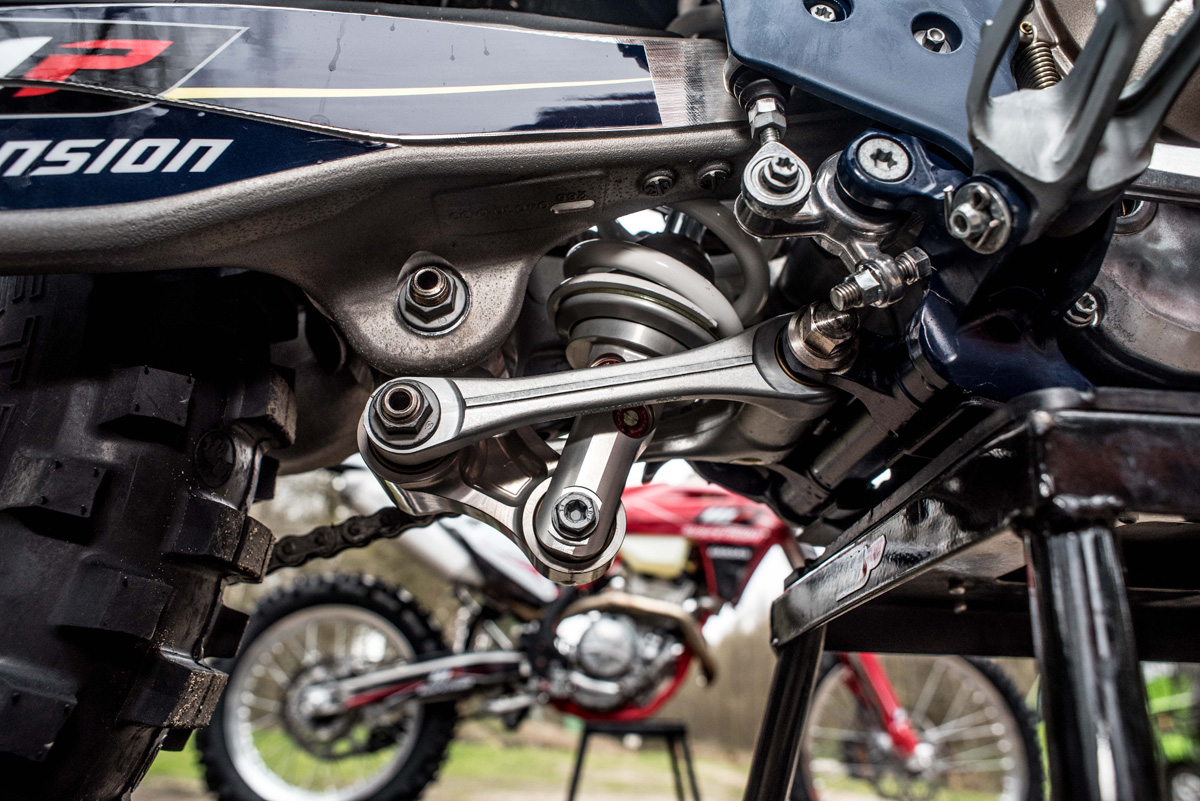 The older Trax system was designed with a second rebound damping valve which opens any time the rear wheel leaves the ground, and closes again when the wheel hits the ground. The system improves traction and stability by putting the back wheel back down to the dirt quicker.

The Trax design worked by using little springs in the bottom of the shock pushing a clevis down (where it mounts to the linkage or swingarm on a PDS shock). This lengthened the shock slightly and allowed the Trax tube running down the centre of the shaft to move downwards and increase the oil flow on the rebound circuit (oil flows through a port at top of the shaft).

As soon as the wheel is in contact with the ground the springs are compressed and the oil flow is reduced and damping is increased.

The latest Supertrax shock improves on that Trax technology with WP’s own design. The Supertrax (high-speed rebound damping) is now completely controlled internally with no change in shock length, no external moving parts, reduced possibility of dirt ingress and the potential wear which in turn reduces potential servicing costs.

What the high-speed adjuster looks like (in open position)... 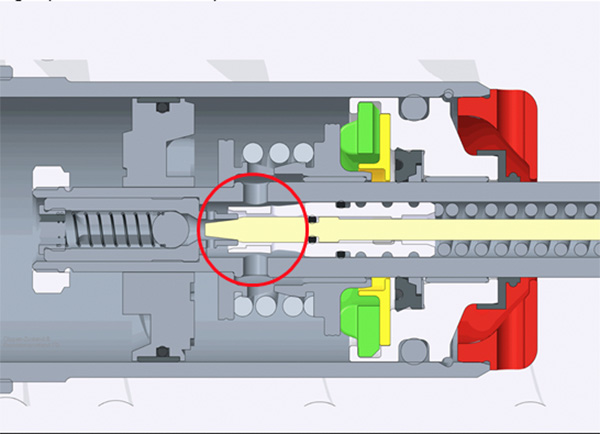 All of this means the rider can adjust high-speed and low-speed rebound damping easily through a huge range of settings (literally one extreme to the other), and have the possibility to make changes that would normally require an internal setting change by a suspension expert.

The shock is available for both PDS and linkage type systems and has other updates including an improved centre of gravity, a new separation piston in the PDS shock, and a new top-out spring and bladder in the linkage shock.

When you ride a bike and hit things hard or leave the ground, you hit the bumpers at either end of the suspension stroke. But for the most part of your riding time you’re in the middle area of that suspension stroke. 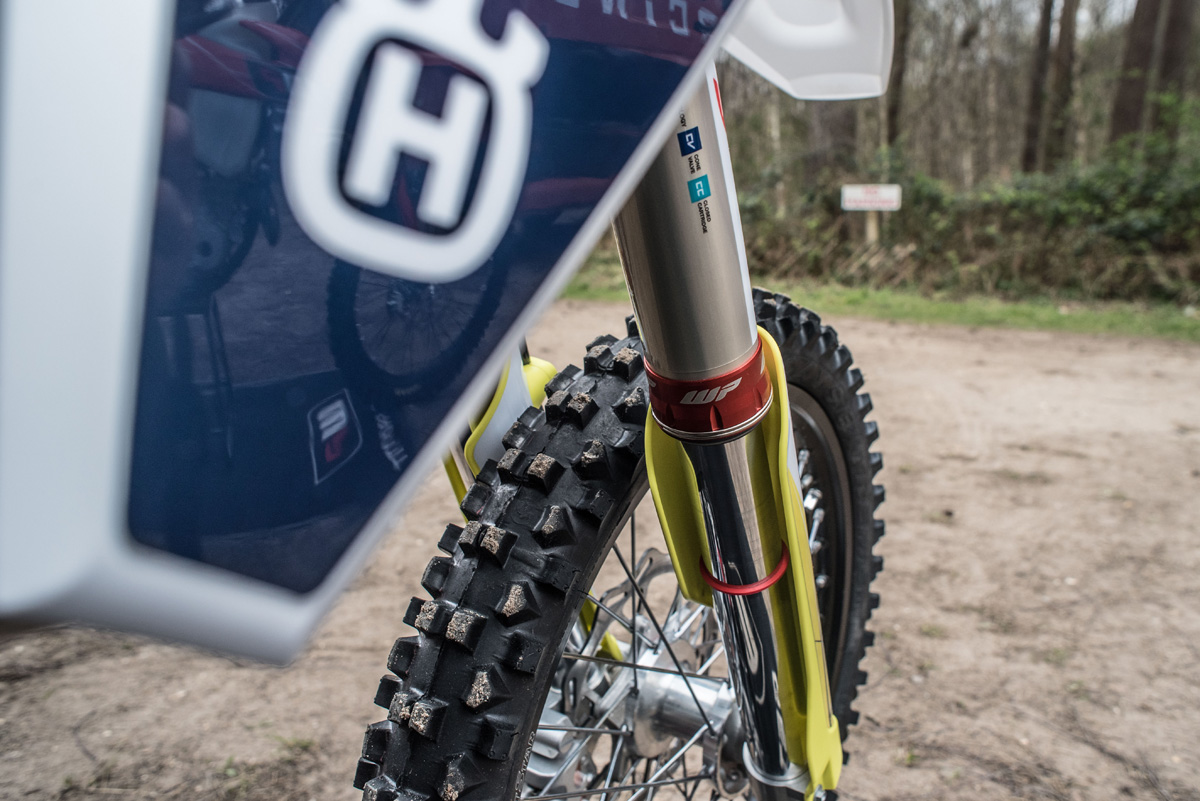 Cone Valve technology in WP forks works in that mid-valve area, controlling the damping via a spring-controlled cone rather than a shim stack (literally a pile of flat washers) found in conventional forks.

There are various benefits but chiefly there is no sealing surface producing a pressure point which means the suspension feels “plusher” as it operates. Along with a huge range of adjustment to suit riding conditions, you can tailor it to different tracks without changing or losing that initial plush feeling. You can also change the cone angle or cone spring rate to increase your range of settings.

WP say the Cone Valve system is also easier to service, reduces wear and likelihood of oil contamination for longer performance life because there’s less chance of fatigue on the shims or of dirt getting between the shims, both of which reduce their effectiveness.

Air forks are commonly used in motocross (though increasingly manufacturers have reverted back to spring-type) but they have some significant benefits for enduro which is why WP tailored a new set just for enduro in 2021. 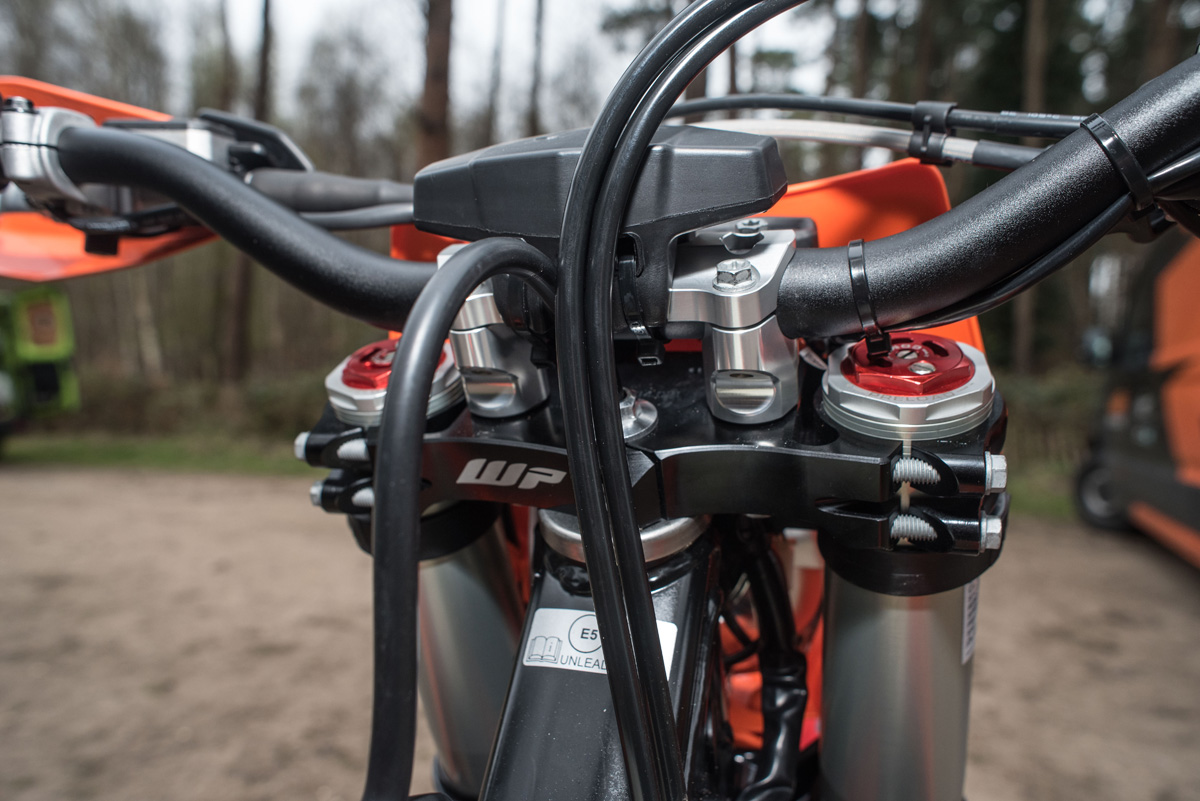 The new WP XPLOR PRO 7448 forks have Cone Valve technology similar to that found on the XPLOR PRO spring forks (see above), but in the air fork.

The separate fork legs adjust rebound in one leg and compression in the other but unlike the MX fork though, the enduro set have just one air chamber which makes adjustment really easy trackside – you just use the air pump which comes with the forks.

They are also a claimed one kilogram lighter than the spring forks which is a lot up front when you’re hours into a ride, flicking between trees or hammering around grass enduro tests.

WP’s options for upgrades are not all about expensive upgrades. You can now get a fork cartridge kit and shock absorber bladder kit which are simple upgrades over the standard equipment on a KTM/Husqvarna/GASGAS to improve performance without breaking the bank. 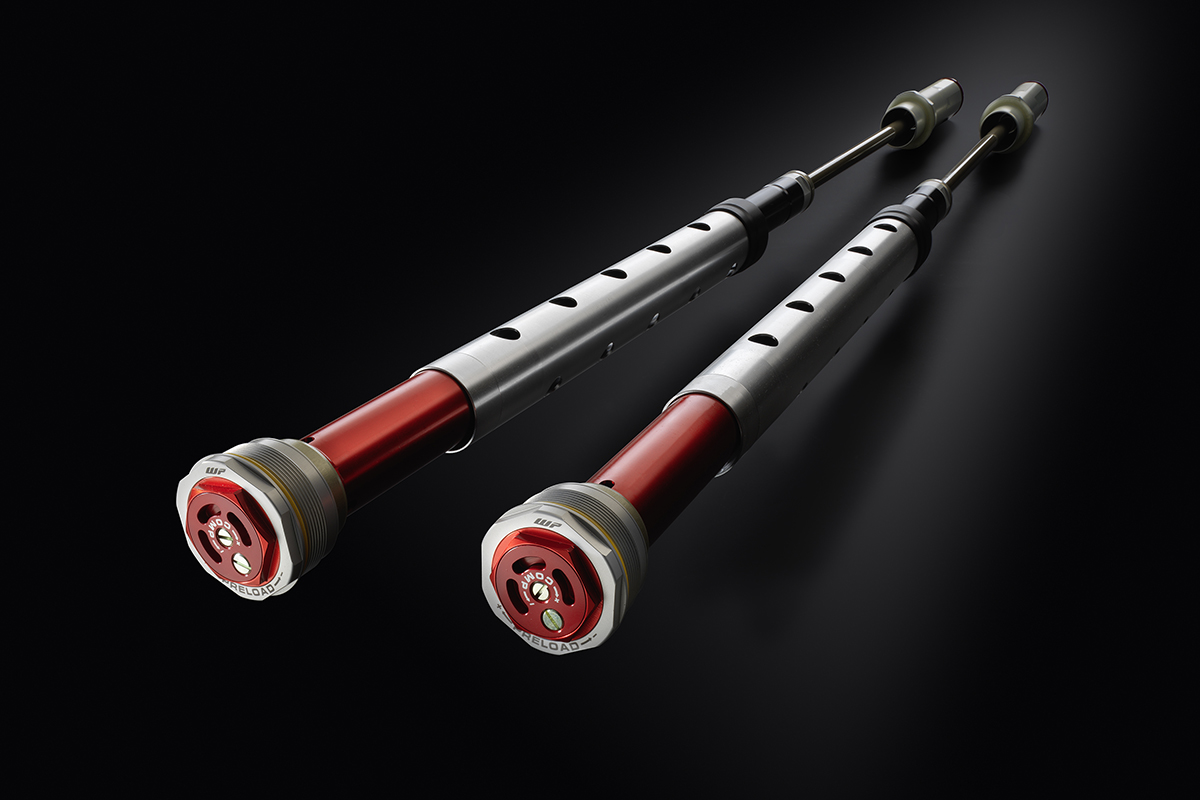 The fork cartridge kit is a simple swap of the OEM fork internals and a relatively simple ‘drop-in’ mechanically. The cartridges are manufactured from higher quality materials WP say and aim to improve feedback for the rider, reduce loss of damping, have a preload adjuster like the Pro forks and all settings are externally adjustable.

The bladder kit is a simple upgrade which many suspension specialists have been doing with OEM WP shocks for a while now and WP finally got in on the act with an official upgrade part.

The bladder kit is a simple internal replacement part for the shock reservoir (the chamber on the outside of the shock). It replaces the stock shock separation piston system in the reservoir with a bladder. WP say the bladder produces less heat build-up and provides a more consistent performance from the OEM shock. 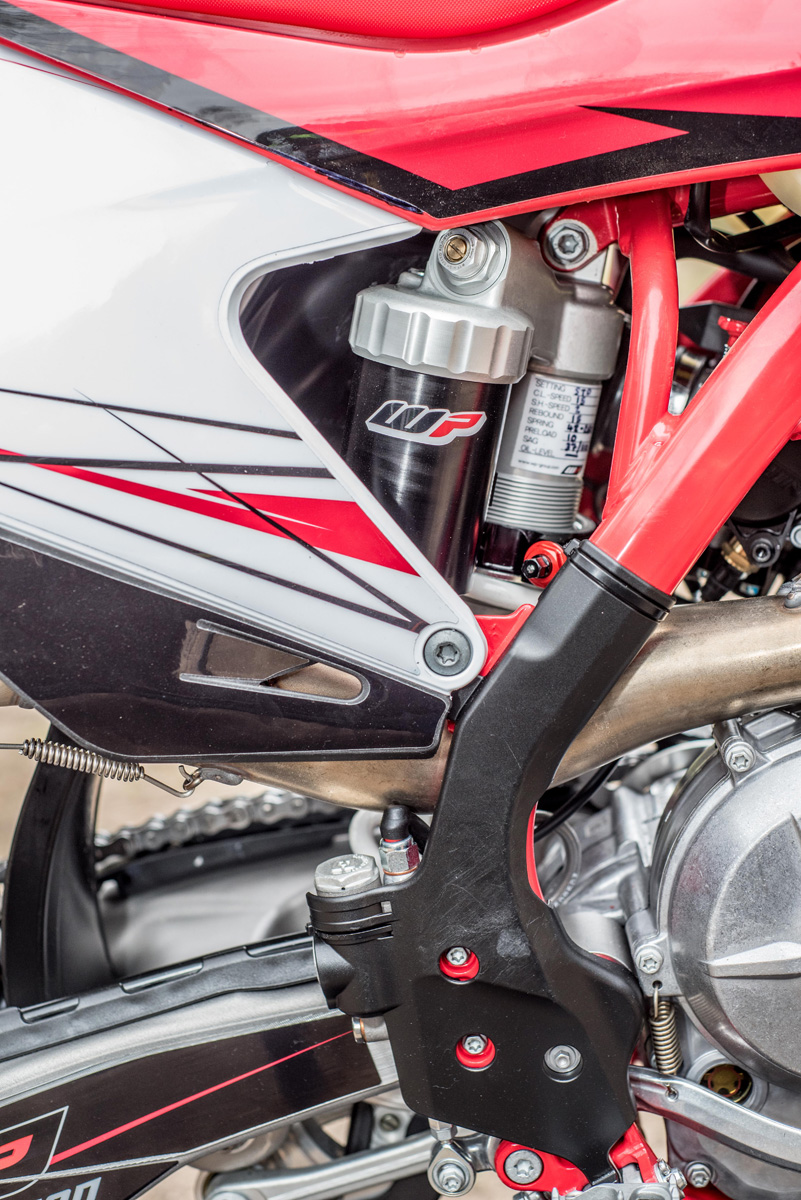 It is available for the PDS shock on KTM models (no linkage) and the linkage type found on the Husqvarna and GASGAS bikes.

Yes, £1800/€1600 for a shock absorber and £2700/€2580 for your forks is a lot and naturally if you’re buying an EXC or whatever to go trail riding this expense makes little sense – the stock XPLOR suspension is fine on the trail. But if you’re into any kind of enduro as a sport it does make sense to invest and is arguably the best way you could spend money on improving the performance on a standard bike.

The common comeback is, ‘yeah but that suspension is the price of a bike’. Sure, it is, but instead of buying a new bike next year (with OEM equipment which needs working on all over again) why not look at upgrading your current suspension instead?

Upgrading standard WP suspension takes time and means pulling the suspension apart to get the settings you want and which an expert suspension tuner will need to know all about to tailor it just for you).

The XPLOR Pro suspension bolts straight in, has a huge range of adjustment all achievable via the external adjusters and, with the help of your WP Suspension centre, set-up can be dead easy wherever you’re riding.

Having a huge range of adjustment means you can literally ride a gnarly MX track in the morning and an extreme enduro trials section in the afternoon and have perfect suspension for both.

Enduro21 put this full XPLOR range of WP Suspension together in to one, big test. Stay tuned, our verdict on everything listed above tested on a 2021 model KTM 250 EXC-F, Husqvarna FE 350 and GASGAS EC 250 F...