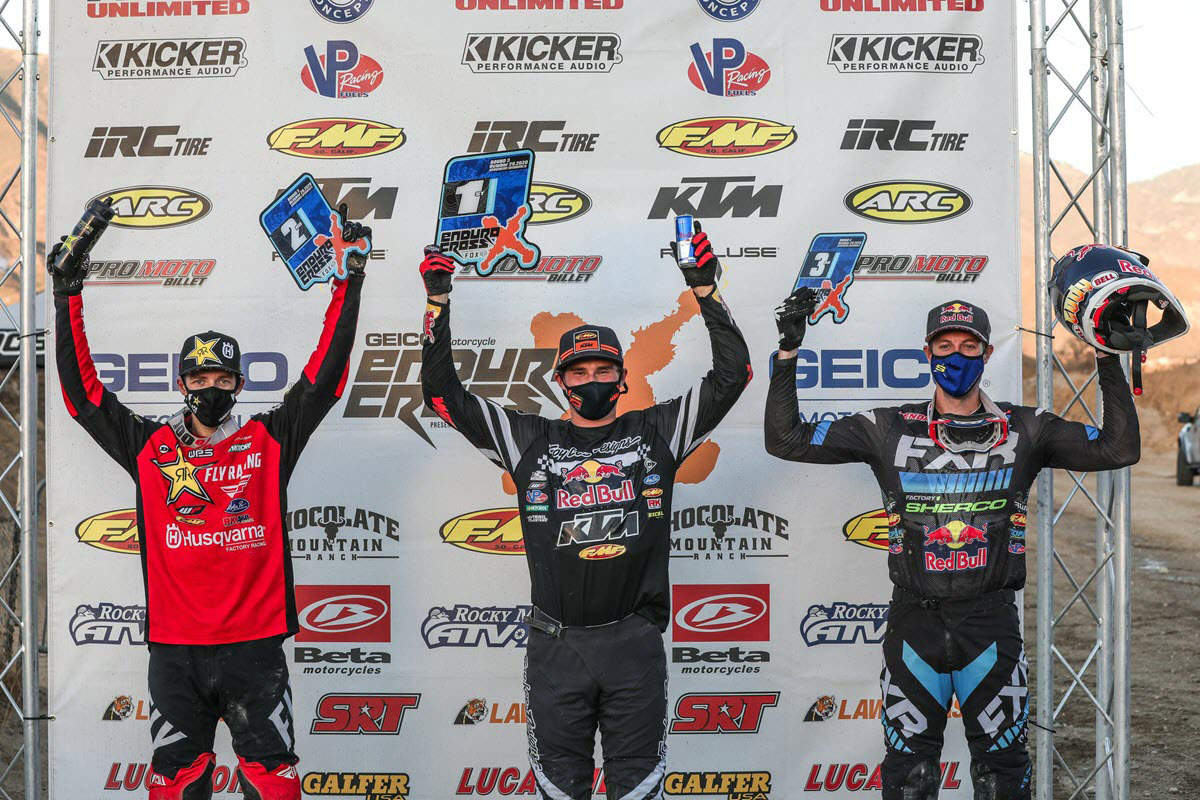 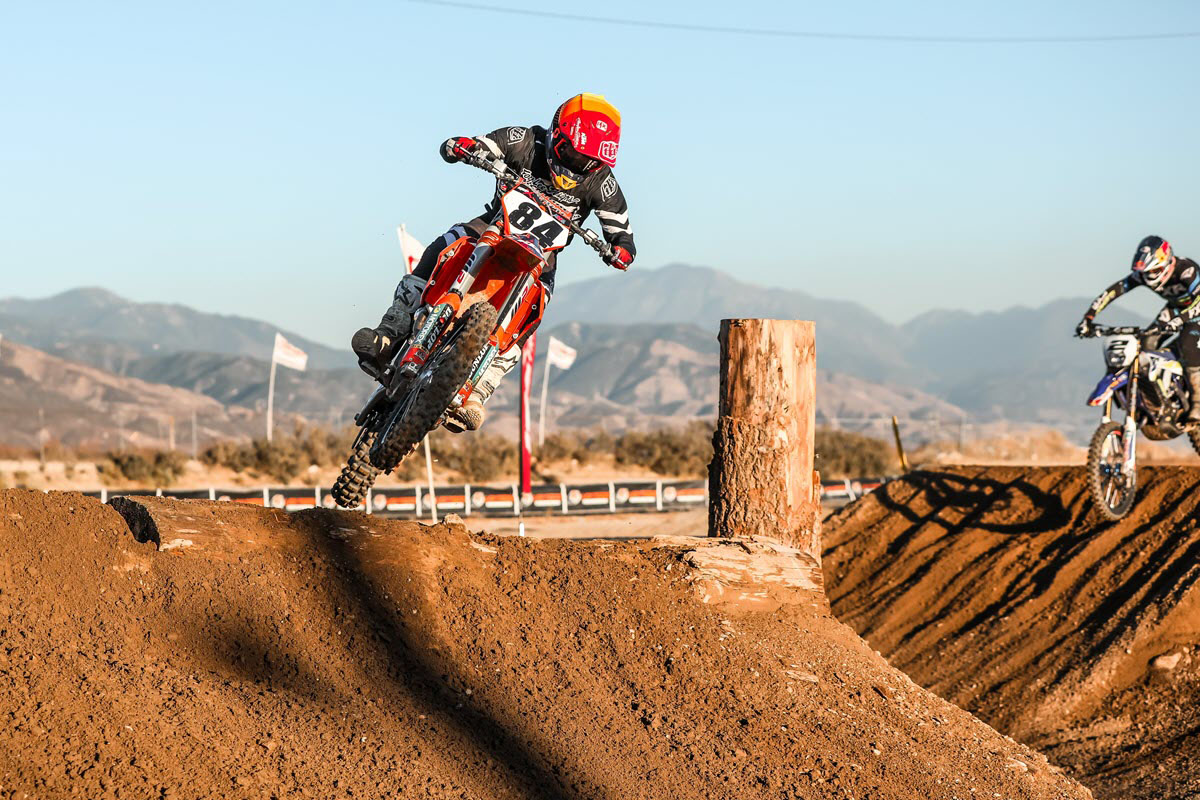 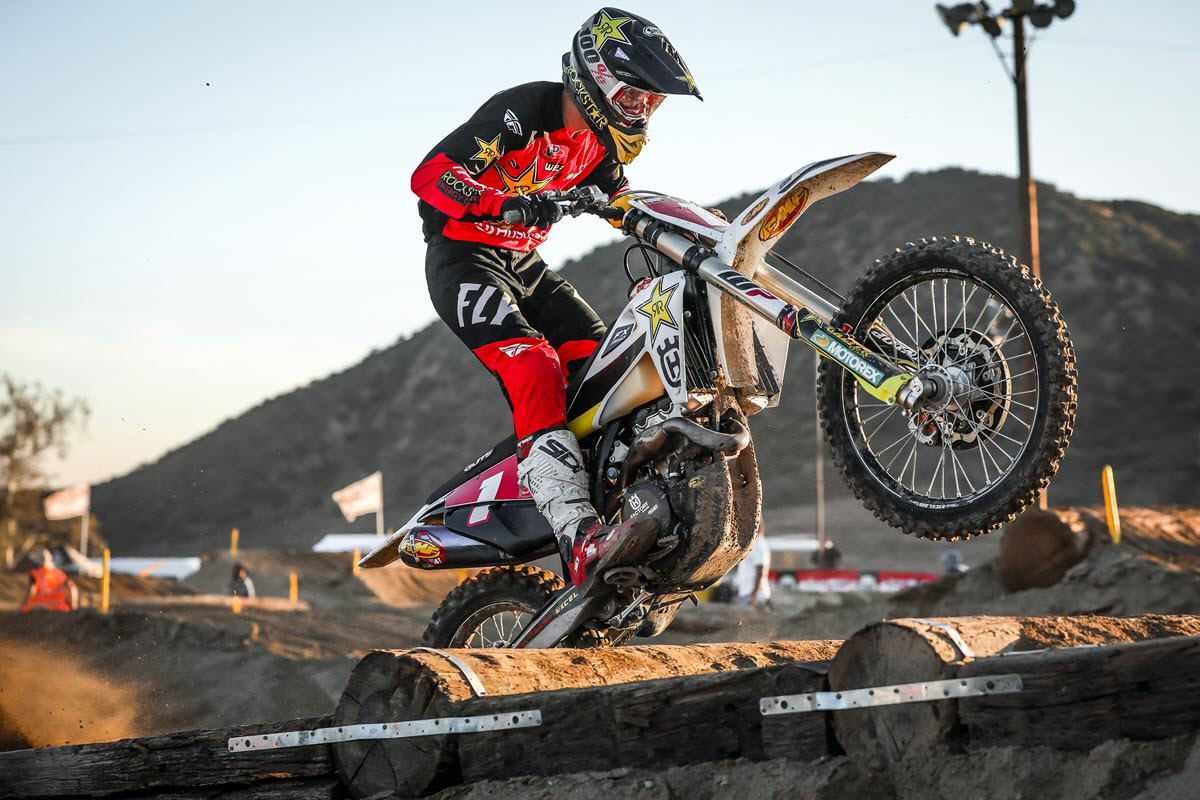 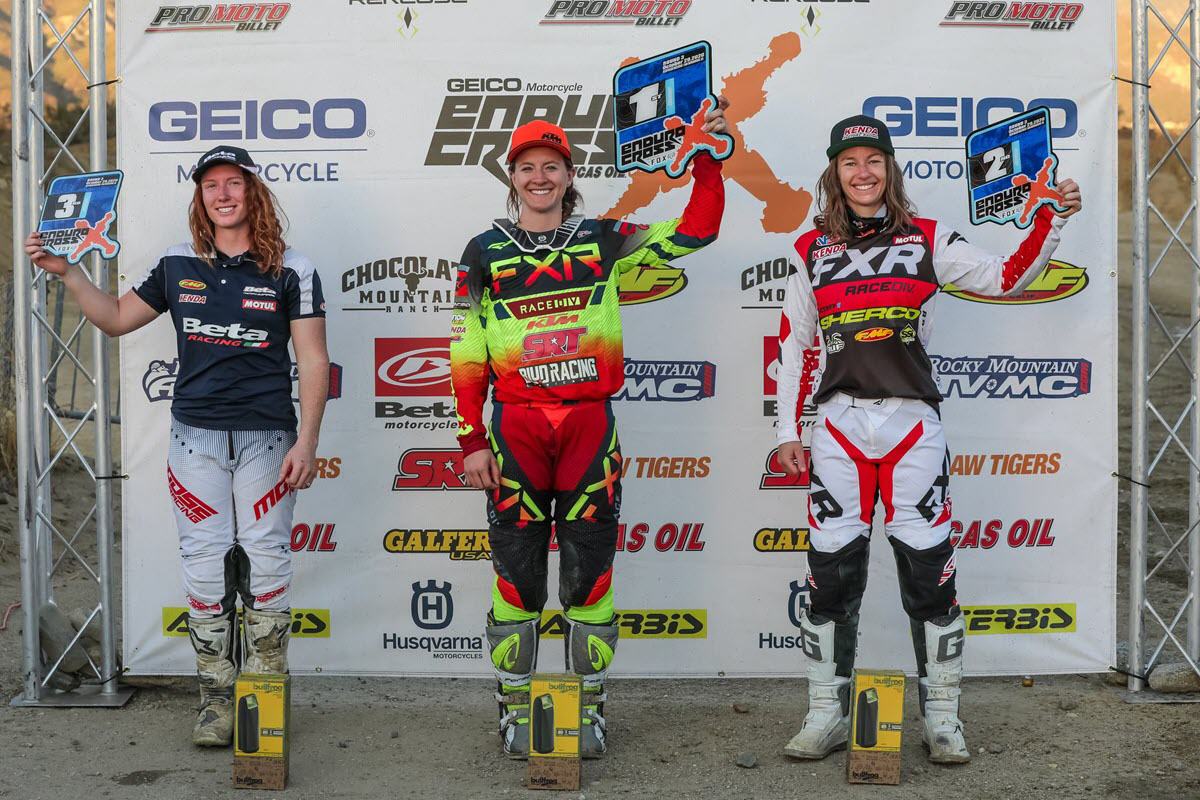 Trystan Hart has taken his first-ever AMA EnduroCross overall win at round three at Glen Helen Raceway. After Colton Haaker won the opening moto and Cody Webb took the second, Hart placed a close second in each to set-up a final moto showdown where the new FMF KTM rider took a dramatic victory.

Rockstar Husqvarna’s Colton Haaker set the bar with the fastest hot lap time to earn the first gate pick for the first of three motos at round three of the 2020 season. FactoryONE Sherco’s Cody Webb was second and FMF KTM’s Hart in third. RPM KTM’s Cooper Abbott was fourth and TM Racing backed Ty Cullins rounded out the top five on a changed and more technical course for this race from the previous weekend.

Haaker edged out Hart for the Fox Holeshot in moto one but Hart took over the lead in the Rocky Mountain ATV/MC Rock garden. Hart led for a lap and a half before Haaker pushed his way into the lead, which he held to the finish with Hart keeping him honest. Webb worked his way up to third early in the race but could not close in on Haaker or Hart. Abbott had another solid finish with a fourth and Beta’s Max Gerston rounded out the top five. 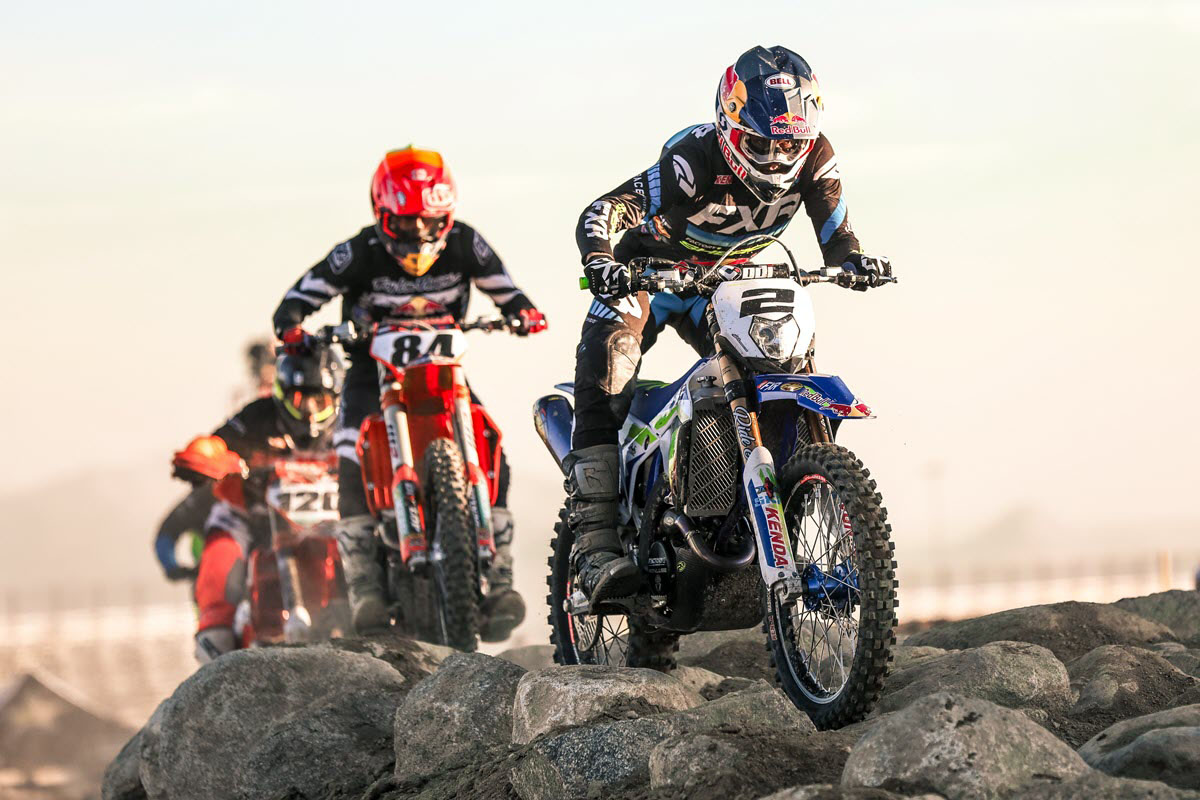 Noah Kepple took the lead to start the reverse grid race two with Wally Palmer and Anthony Johnson on his heels. Haaker and Webb quickly worked their way through the pack to get to second and third midway through the second lap.

Webb then passed both Haaker and Kepple to take the lead before Haaker worked his way past both riders to take over the lead. Haaker appeared to be on the way to the moto win but with just over a lap remaining, he collided with a lapped rider’s bike and dropped to third. Hart meanwhile had worked up to Webb’s tail and the two battled to the finish line with Webb taking the win and Haaker recovering for third. Kepple held on for fourth and Abbott finished fifth.

Webb, Hart and Haaker entered the third and final moto tied on points but it was Cooper Abbott who blasted to the Fox Holeshot with Webb in second and Haaker hitting the deck on turn one and leaving himself a mountain to climb from last position.

Webb took the lead at the end of lap one with Hart following and then making a pass on Webb on lap four. Hart looked comfortable but Haaker had worked his way into second with blistering pace in the final laps.

As Hart appeared to back-off, Haaker closed in and made an aggressive pass exiting the Rocky Mountain ATV/MC rock garden. Hart responded by passing Haaker back at the end of the next straight in the triple K rail section and held him off to the flag. The moto win earned Hart the overall ahead of Haaker and Webb. Abbott finished fifth in the moto for fourth overall while Gerston finished fourth in the final moto for fifth overall.

“It feels good to finally get an overall win!” Says Trystan Hart. “I almost lost it on the last lap when Colton bumped me but I managed to get him back and secure my first overall victory!

“It is pretty crazy to take my first win, but I am not overly excited because I am more focused on the championship and I have a bit of a deficit to overcome still. So we will be back tomorrow to try to gain back more points.”

“The first moto was perfect pretty much.” Explains championship points leader, Colton Haaker. “The second moto was going good until a lapped rider whiskey throttled right in front of me and took me out. That final moto, I was a little further outside than I wanted to be because of the third gate pick and I just lost the front coming into the first turn. So I just wanted to see how far I could move up and ended up making a pass for the lead on the last lap. Then a little mistake let Trystan get back by me. It was close but I still salvaged second.”

“It wasn’t exactly the result that I hoped for.” Said Cody Webb. “That first moto, I hung onto their coattails but couldn’t really challenge for the top two spots. In the second moto, I worked my way to the front but then Colton managed to get by me and he had the moto until he got taken down. I held the insides everywhere to keep Trystan behind me and it was good to get our first moto win.

“I did all I could in that final moto but I rode a little tight. It was definitely a more technical track today but I realized I have been training for longer Extreme races in the woods and I am missing some of the intensity needed for EnduroCross. We will come back tomorrow and try to improve.” 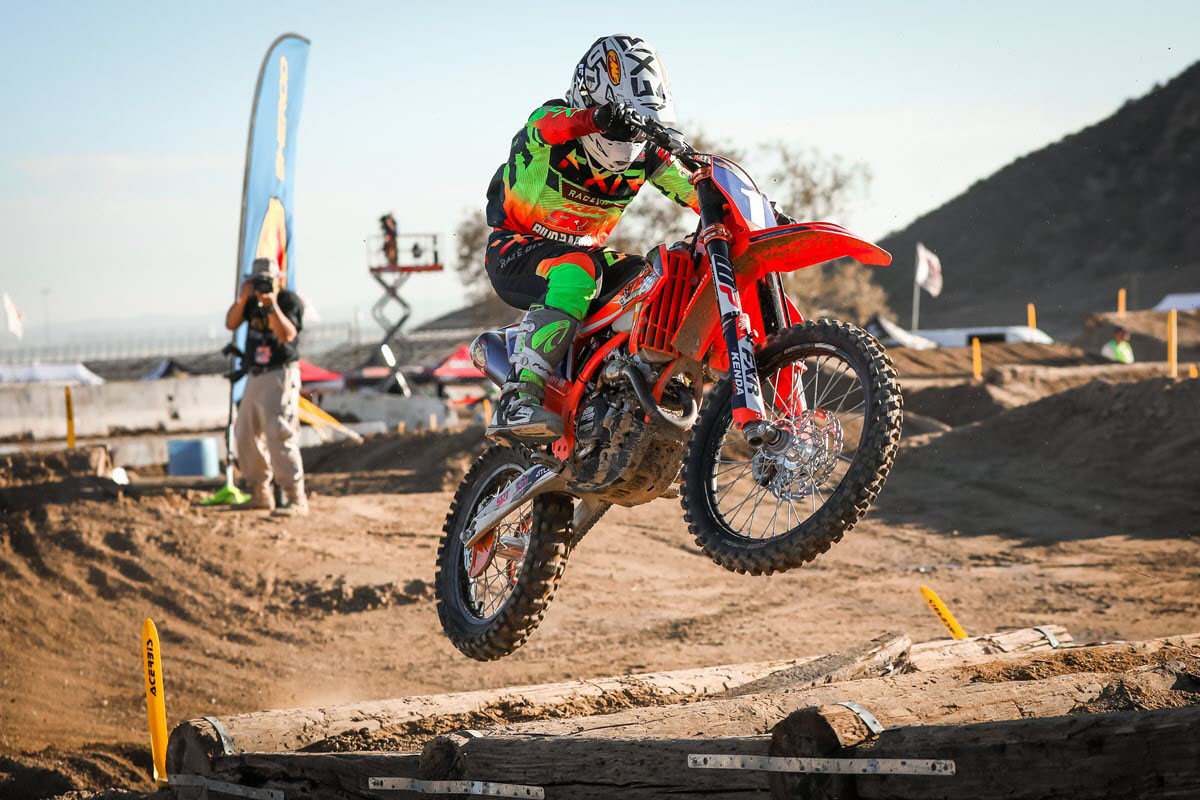 Super-dominant Shelby Turner once again made it three in a row in the Women’s class on her KTM ahead of Louise Forsley on the Sherco and Morgan Tanke finishing third on the Beta.

In the Amateur/Intermediate main event, Joshua Fout took the win on a Yamaha. Tyler Smith was second on a Husqvarna and Ryan Gouveia rounded out the podium on a TM.

Craig Thompson won the Vet class for the second race in a row on his Husqvarna. Ryan Gouveia had his second podium of the day in second and Tod Sciaqua rounded the podium on a GasGas Trials bike.

Round four on Friday

The riders will be back in action at Glen Helen for round four on Friday, October 30. The final two rounds, originally planned for Boise, Idaho have been rescheduled to Glen Helen due to Covid-19 restrictions. The fifth and sixth rounds will take place on Monday and Tuesday, November 2 and 3. EnduroCross rounds 5 & 6 change venue to Glen Helen Raceway