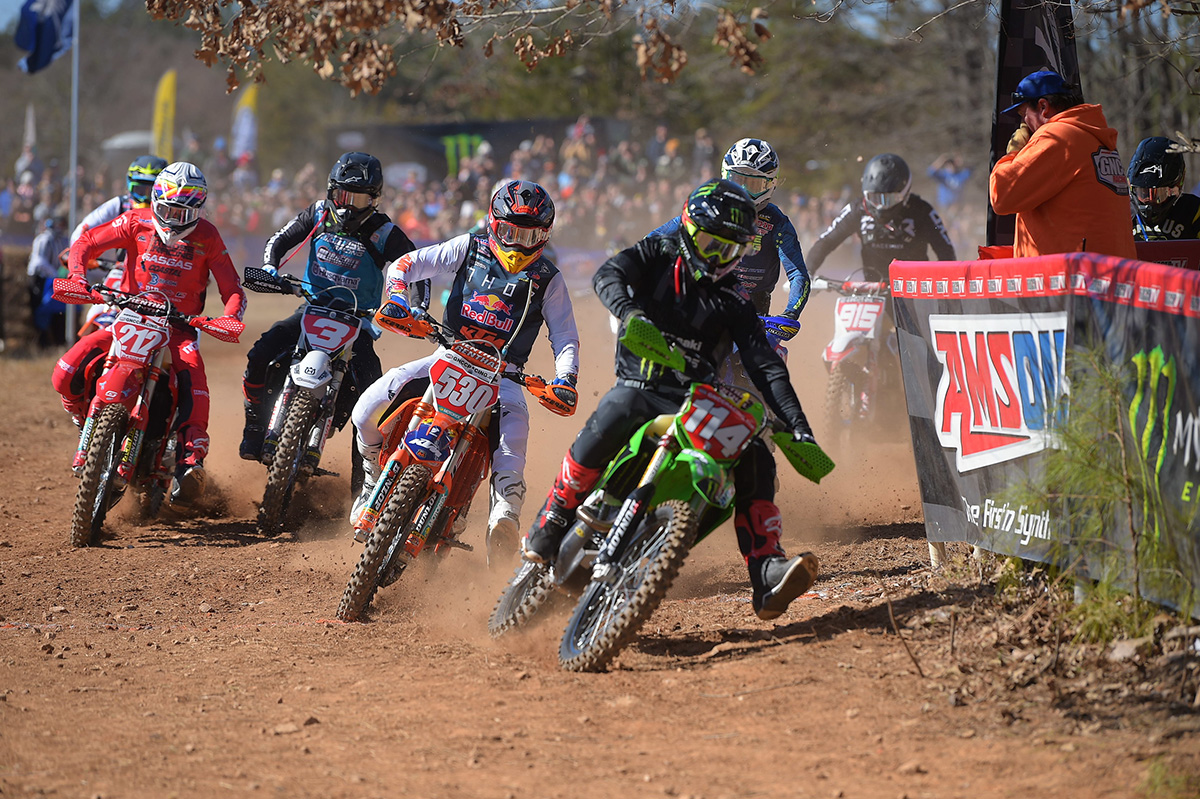 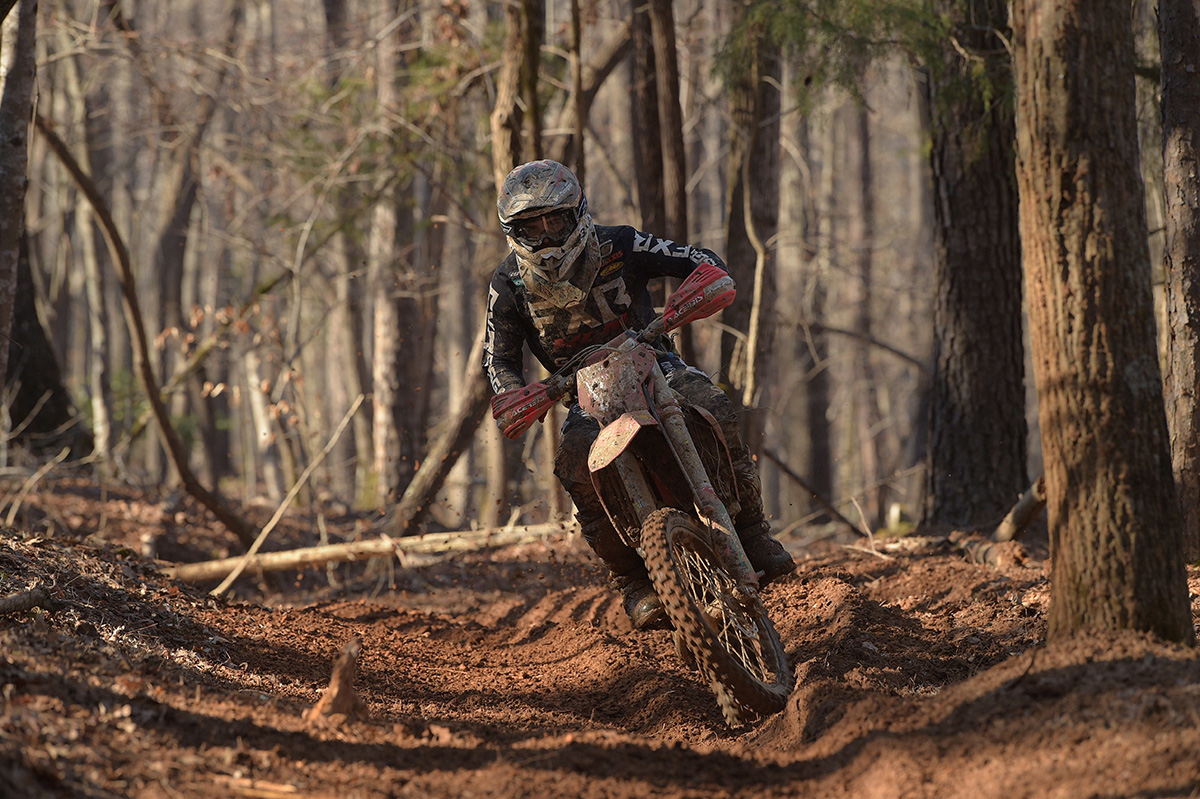 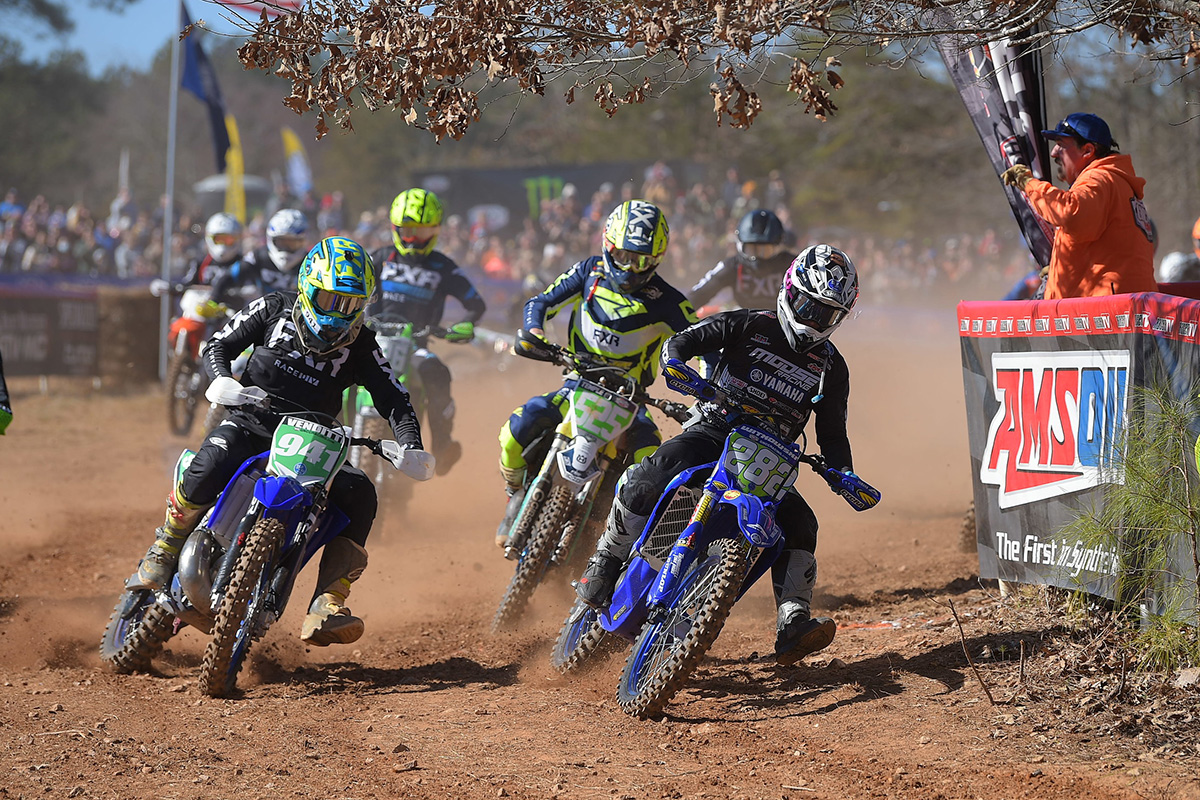 Grant Baylor has won the opening GNCC round of 2021 at Big Buck in South Carolina, taking a maiden victory for himself and GASGAS in the Grand National Cross-Country series.

There’s a massive reason for the buzz around the 2021 Grand National Cross-Country series. Chiefly who will fill Kailub Russell’s considerable shoes? After the eight-time champion retired from the series in 2020, the riders lined up for round one at the Big Buck GNCC with very few people putting money on the junior of the Baylor brothers answering that call.

Coming back from seventh off the first turn, Grant Baylor made his way through the class of 2021 (not a shoddy bunch it must be said) to make a pass for the lead with three laps remaining. It was a lead he never relinquished and when the chequered flag waved after three hours it was a popular maiden GNCC win for Baylor as well as the new KLM Milwaukee GASGAS team and indeed the manufacturer in its newest guise.

DuVall and Strang take up the challenge 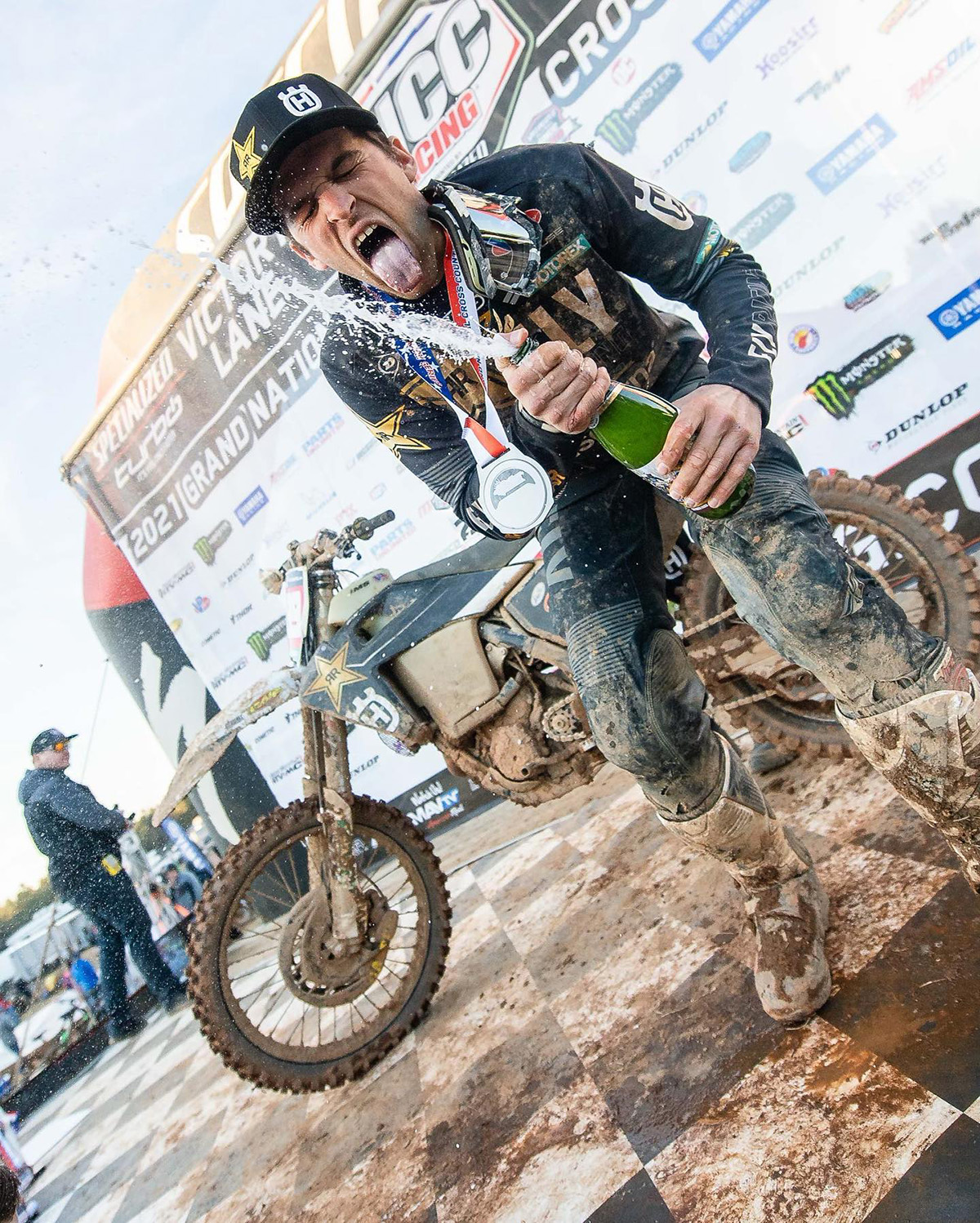 Chief among the GNCC title contenders this season would surely be Thad DuVall, who enjoyed his return to the podium (see above), and Josh Strang who finished second and third respectively at Big Buck. Both riders are hugely experienced in GNCC but also experts in having to play second fiddle, come season end, to Kailub. 2021 is a huge chance for both riders.

“I felt like I rode really good all day,” DuVall said. “I knew Grant was coming so I just tried to ride my own race and he got around me. He was riding a little out of my comfort zone and I knew with it being the first race I didn’t want to be laying on the ground.”

After taking the holeshot, Josh Strang dropped down the order (though not much in actual time on the track) for much of the race. But the Babbitt’s Kawasaki rider kept on strong until the flag, taking places late in the race as others faded.

It was funny not to see a KTM on the podium...

After so many seasons of seeing at least one KTM on the GNCC podium, usually Russell’s, Big Buck 2021 produced an orange-free set of steps. Ben Kelley looked like he could get the job done and led the first three laps. But the FMF KTM rider got stuck in a mud hole on lap three and, despite help, took almost a minute to get back going again.

That dropped Kelley to seventh where he chipped back into podium contention but was then “plagued by a series of issues” late in the race, including crashes and mishaps with lapped riders and ultimately finsihed in P5 behind fourth-placed Jordan Ashburn.

Puncture puts Steward out – not that kind of a puncture

What of the senior Baylor brother Steward? The guy who took so many wins since jumping on the AmPro Yamaha in the second half of 2020? His crash in the opening round of the AMA National Enduro series a couple of weeks back saw him take a deep wound to his side which his doctors and team decided was just too bad to risk racing on home soil at Big Buck.

Mike Witkowski put his AmPro Yamaha out front off the start line and settled into the lead group which was headed by Coastal GASGAS Factory Racing’s Jonathan Girroir in the early laps. Witkowski made a pass for the lead stick on lap two and went on to notch-up five consecutive lap scores out front to finish over a minute ahead.

Defending XC2 champion Craig DeLong finished in second place, despite hitting another rider at turn one and giving himself a battle to get back up the front. He did take the lead at one point but was shuffled back to third before finishing the race fighting with Lyndon Snodgrass for that podium spot. 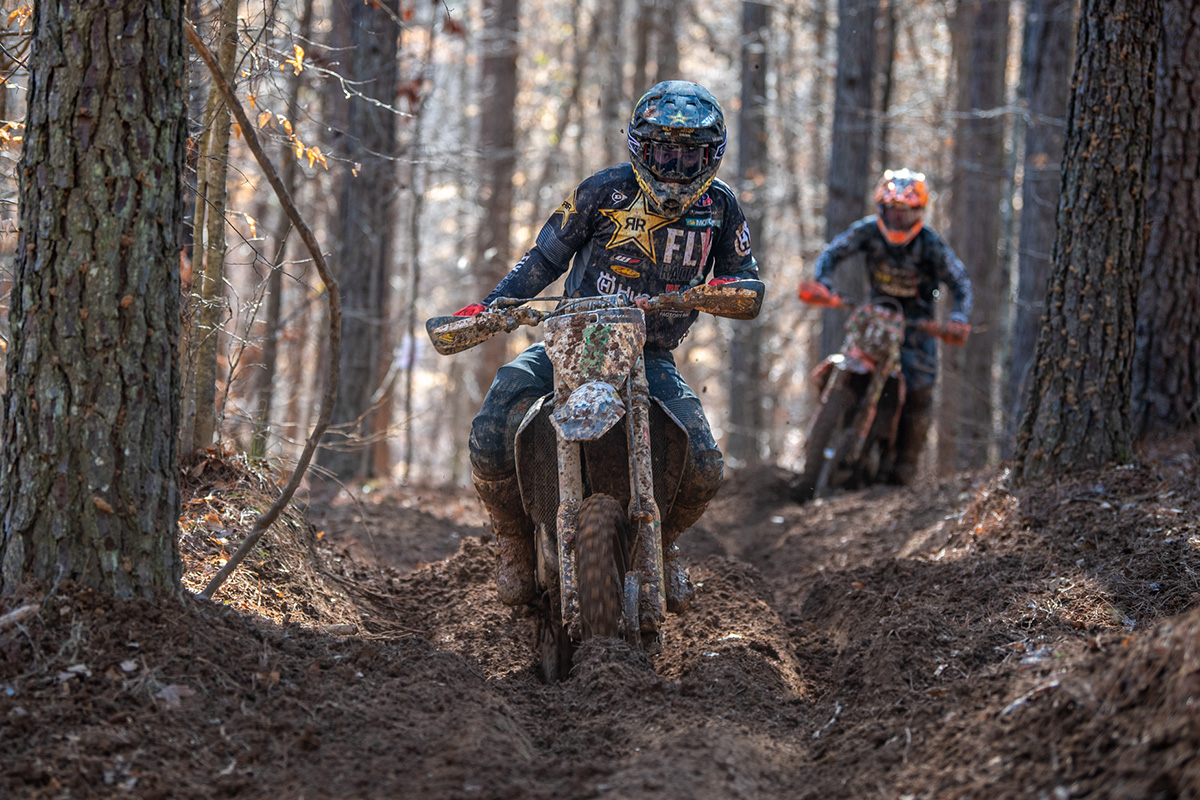 “I’m happy with a second-place finish considering how I started,” said the defending XC2 champion. “I went in a little too hot in the first turn and ran into the back of someone’s bike and down I went.”

After what feels like a about a year of visa hassle, Australian Lyndon Snodgrass got back onto the Babbitts Kawasaki KX250 at Big Buck and duly delivered a solid result. Snodgrass was part of an intense, race-long battle in XC2 which included the top two finishers plus Evan Smith, Cody Barnes and Johnny Girroir who finished sixth on the day after a mistake on the last lap. 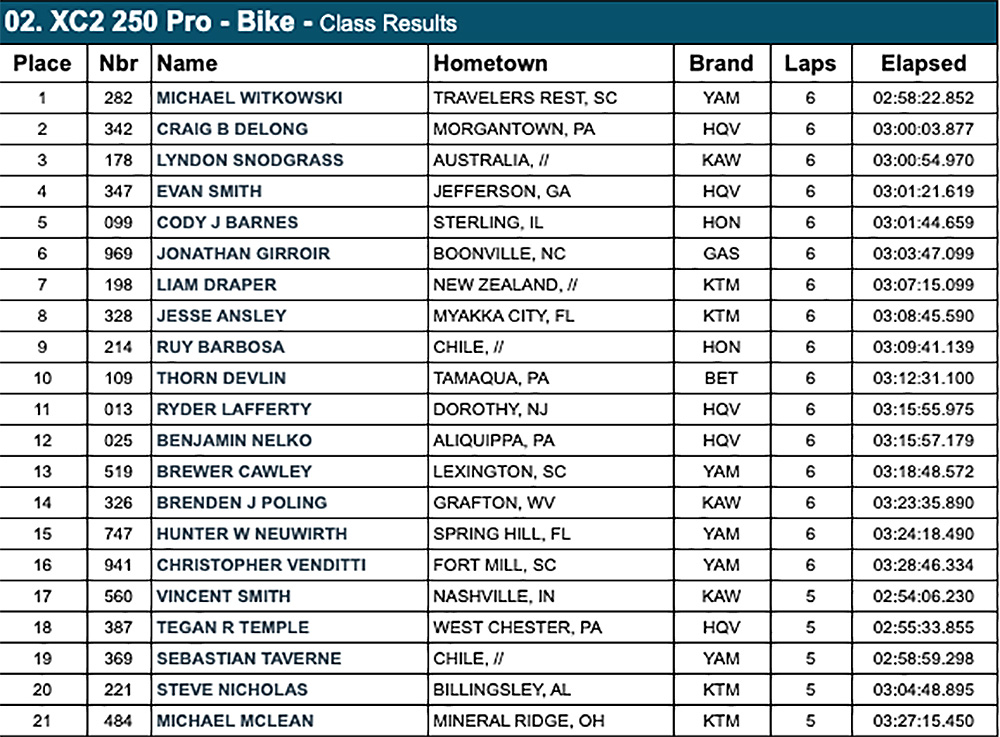 Korie Steede took the holeshot in the morning race but AmPro Yamaha’s Rachael Archer made the pass for the lead and extended her gap over the rest of the field for the duration of the two-hour race to finish one minute clear. 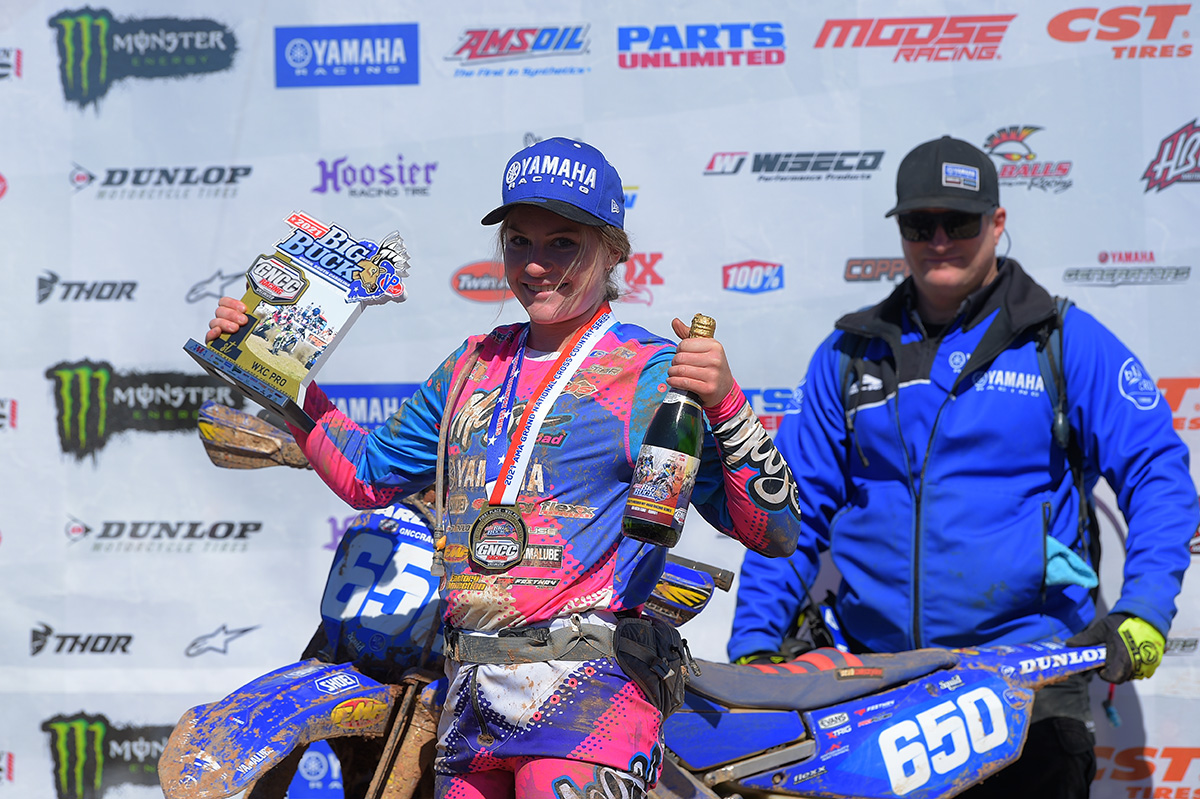 The WXC defending champion Becca Sheets was down in fourth early on but had made the passes up to P2 as the white flag flew. Factory Beta’s Rachel Gutish rounded out the WXC podium at round one after running at the front of the pack for majority of the day. 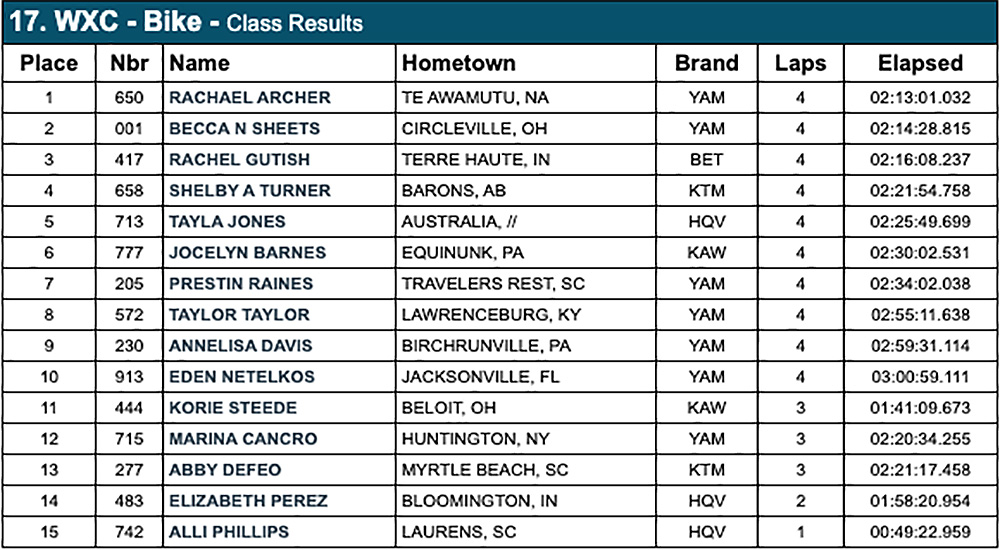