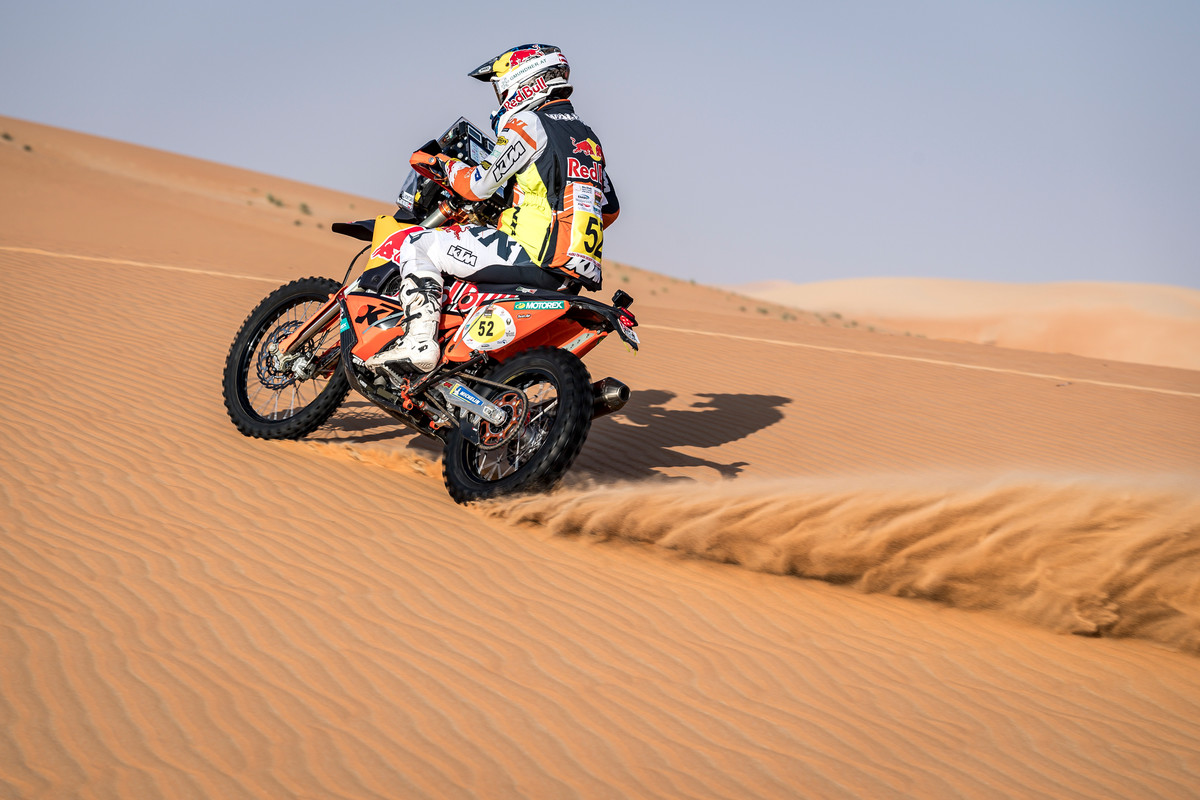 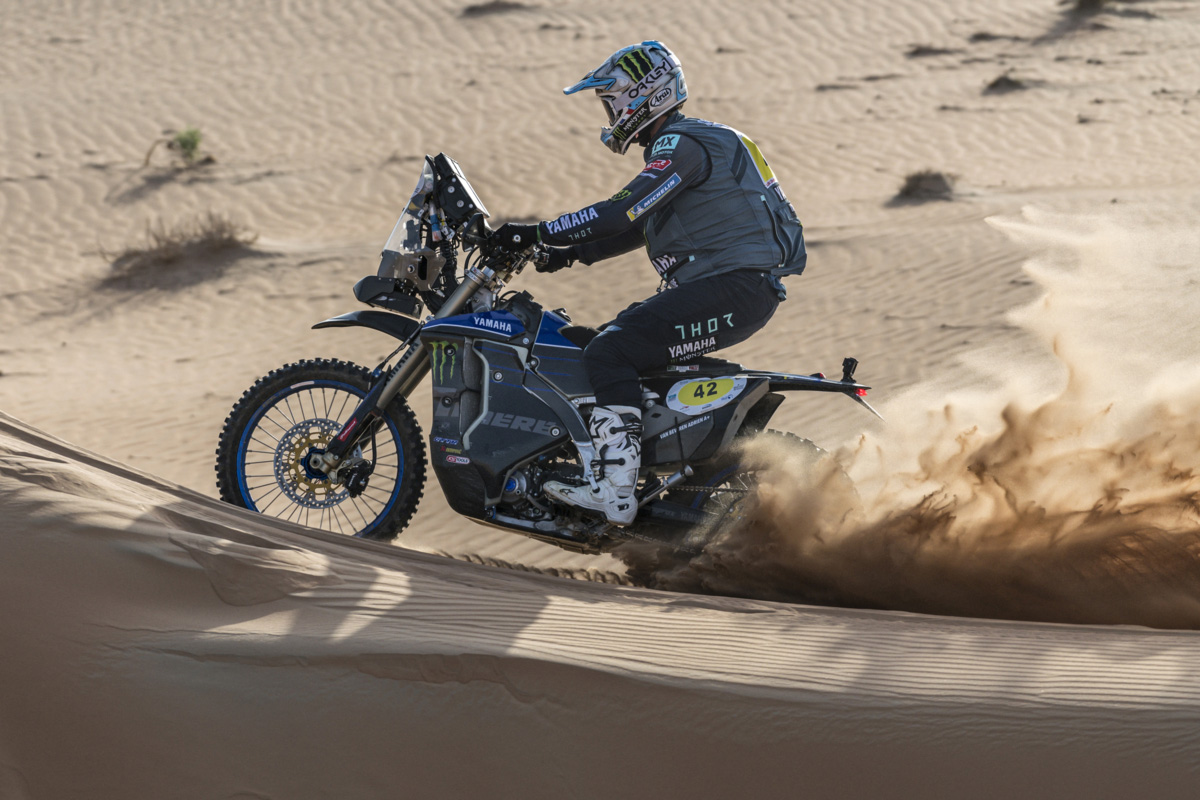 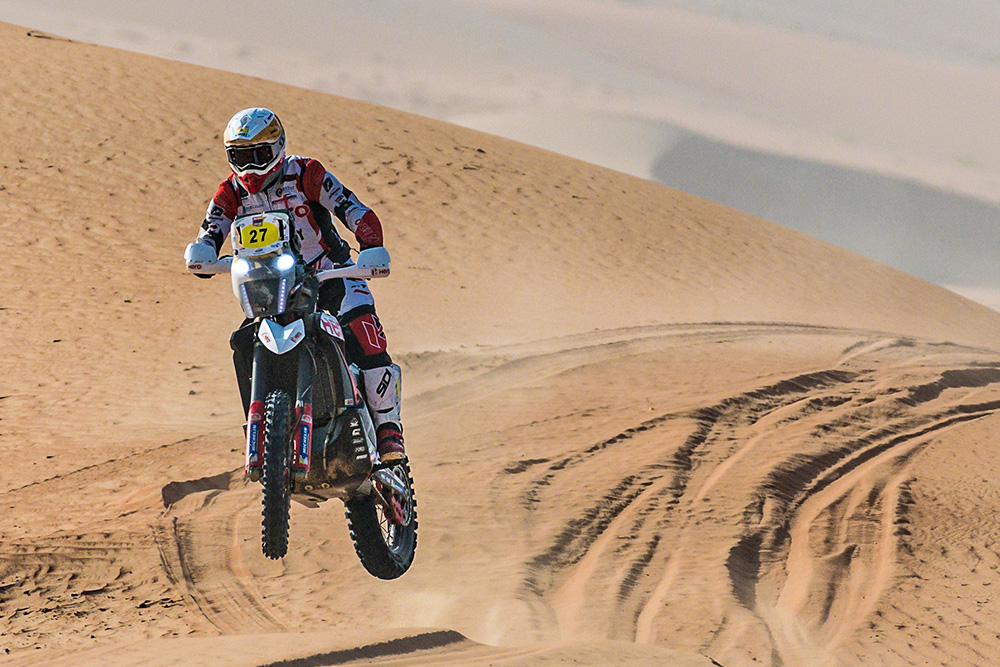 Red Bull KTM Factory Racing’s Matthias Walkner rounds out the 2021 FIM Cross-Country Rallies World Championship with a race win at the final round, the Abu Dhabi Desert Challenge ahead of Adrien Van Beveren and Joaquim Rodrigues on the Hero.

Day five, the final stage of the 2021 Abu Dhabi Desert Challenge was tough one. Despite a relatively short 216 kilometres timed special, it was unusually raced without a break or fuel stop, making it physically demanding but also a stress for riders who couldn’t go balls-out all the way if they wanted to make the 379 total stage distance.

Adrien Van Beveren lead the final day away after his stage four victory, one place in front of overall rally leader Matthias Walkner. Both riders, along with Daniel Sanders (more on his dramatic final day below…) were gunning for the victory and Walkner held a slight advantage in being able to chase down Van Beveren ahead of him by using his tracks in the soft sand in the opening part of the special.

Walker, Van Beveren and Sanders have been head and shoulders the better riders this week in the Abu Dhabi sand, super-consistent all through the five days racing, no matter where they have started.

Matthias went on to complete the final stage just over one minute behind Van Beveren and on corrected time that gave the Austrian the race win by over four and a half minutes to confirm his place at the top of the world championship standings. 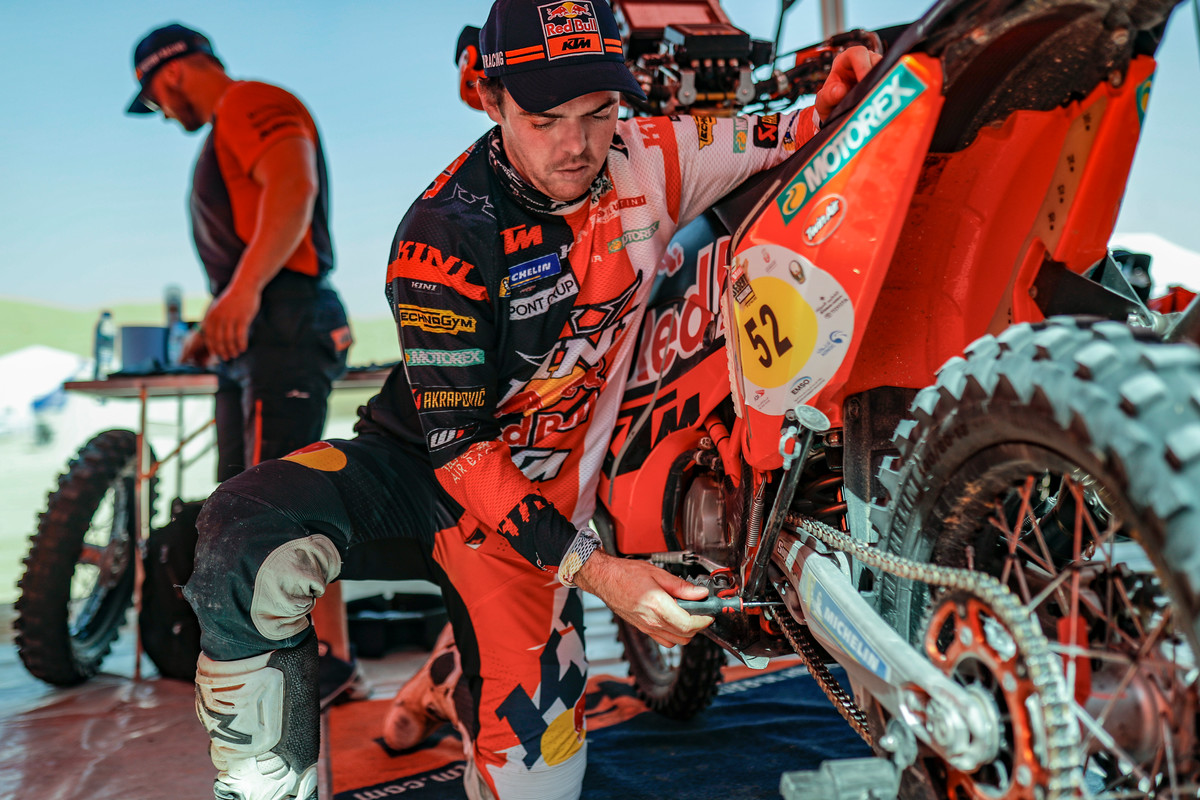 “It was really close today!” Said Walkner at the finish. “The stage was really long without a refuelling point and so towards the end I had to slow down a lot to conserve fuel. It’s part of our sport that you can have four good days and then nearly be caught out in the last few kilometres. Thankfully, I made it to the finish line and am really happy to win the last race before Dakar.”

Reflecting on a very successful 2021 world championship season, Walkner says his mistake-free riding is a key element. “The whole year has been fantastic for me – with the help of the team, we have all worked really closely to bring the success we’ve had. I have ridden well and not made any big mistakes, or suffered any injuries.

“I’ve learned a lot, even from this week riding in the sand, which is normally not my best terrain to race in. My riding has improved, and we’ve found some good set-ups for the bike, too. Overall, it’s been an incredible season and to top it off by winning the last race really helps my confidence. The big goal is of course now Dakar, it’s not far away, and I’m really looking forward to it.”

Claiming three stage wins from five, Frenchman Adrien Van Beveren is another rider on a roll ahead of the 2022 Dakar. AVB was in contention for overall victory from day one and went on to finish second both in this rally and the Cross-Country Rallies World Championship.

“Winning the last stage after opening, and finishing second in this rally, is a huge moment for me.” Said Adrien. “The final stage was really tricky to begin with, made even more challenging by leading out so I rode a little cautious, but it paid off. No mistakes and knowing I had a nice gap in the overall classification meant that I could ride without risks and to win the stage, it’s just amazing.” 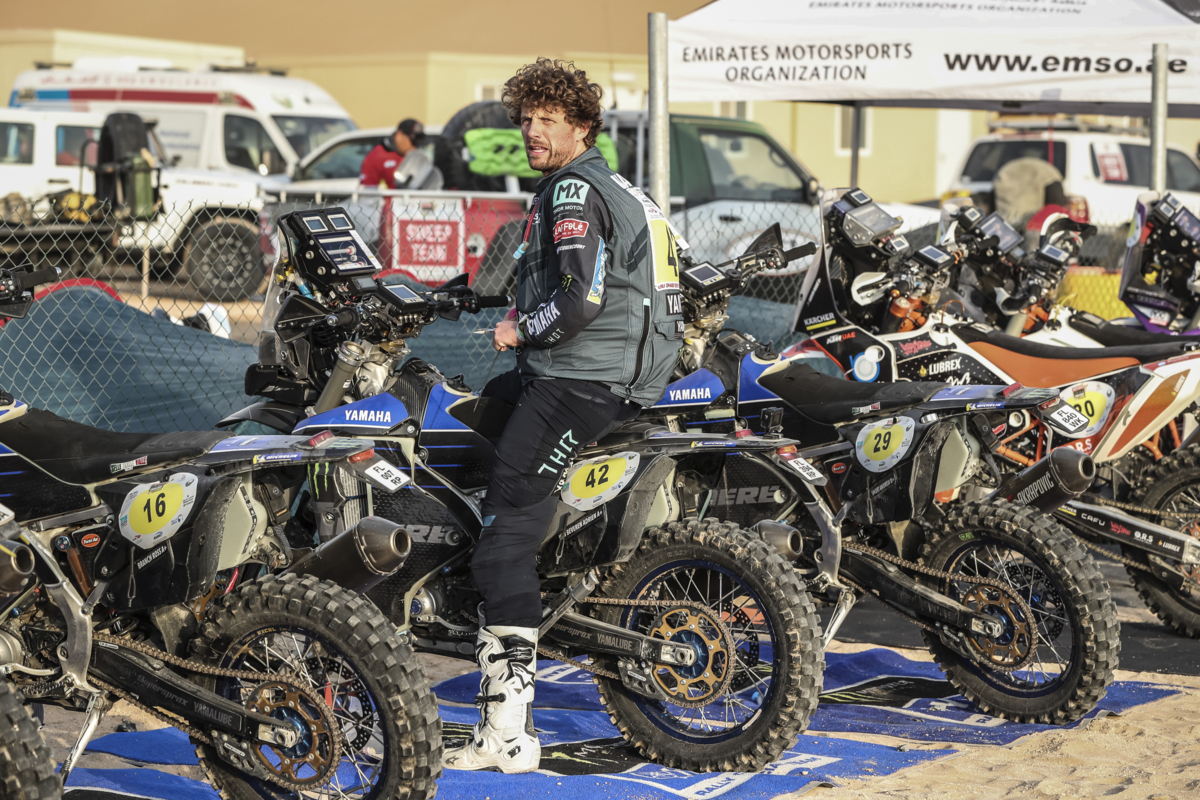 “All year I’ve been consistent and focused on finishing each and every stage and this rally was no different. This result has come just at the right time ahead of Dakar, so from now until January I will maintain my level and aim to fight for the win there.”

Van Beveren was the first of three Yamaha riders completing the final stage in the top four with Ross Branch third and Andrew Short fourth.

Throttle to the stop? No fuel stop…

“The last day has obviously been a huge disappointment for me and the team, but that’s racing.” Says GASGAS rally team’s Daniel Sanders who was on for a potential second place finish (at least) in the race and P2 in the world championship until he was caught out by a final stage designed to test fuel consumption to the limit. 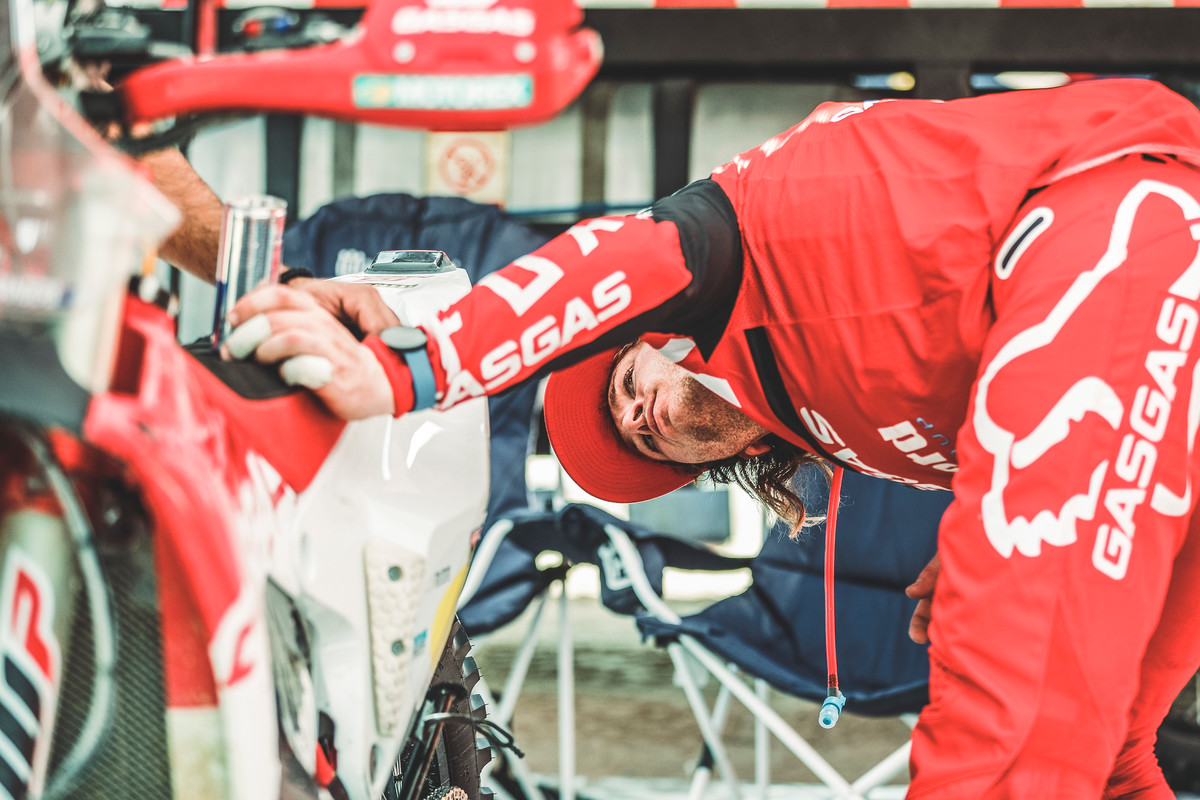 A good start position allowed Daniel to make up time on the leaders and put himself in charge of the stage, topping each of the split times on his way through the special. But around the halfway point the reality of the terrain and the distance hit home…

“I started really well and was making good time through the dunes at the beginning of the stage. I realized about halfway through that with no refuelling in the stage, and the type of terrain we were racing through, fuel was going to be a problem. So I tried to ease my pace as much as I could. Unfortunately, it wasn’t enough, and I eventually ran out.”

Typically Sanders did not give up and after employing the tip your bike on the side technique to get fuel from other areas of the tanks, ended up pushing his GASGAS over the line to complete the stage and finish 14th overall.

“It’s not the way I wanted to end the season, but as it’s just my first full year in the championship, I’m definitely pleased with how I’ve progressed and raised my level. Although the result here has knocked me back a little, I’ll just take the positives and look ahead to the Dakar in January. I’ve really gelled with the bike – my navigation is always improving, and my pace is definitely there.”