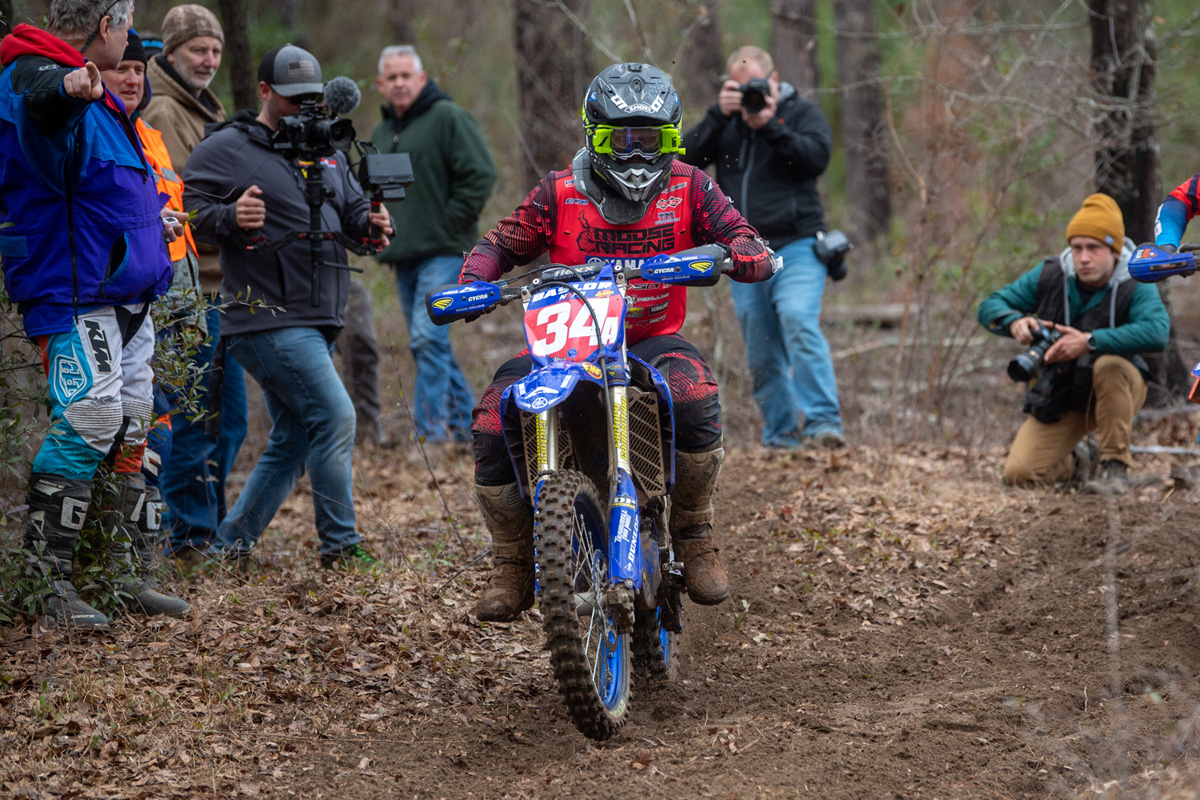 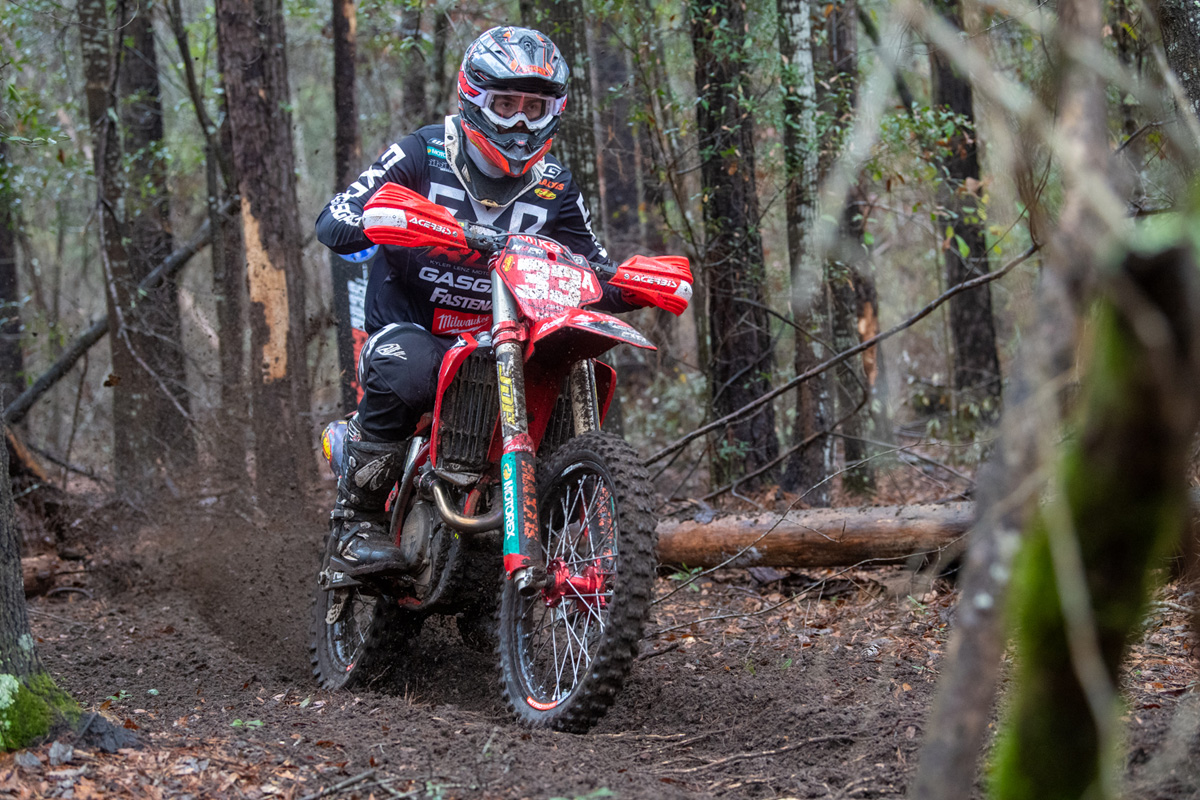 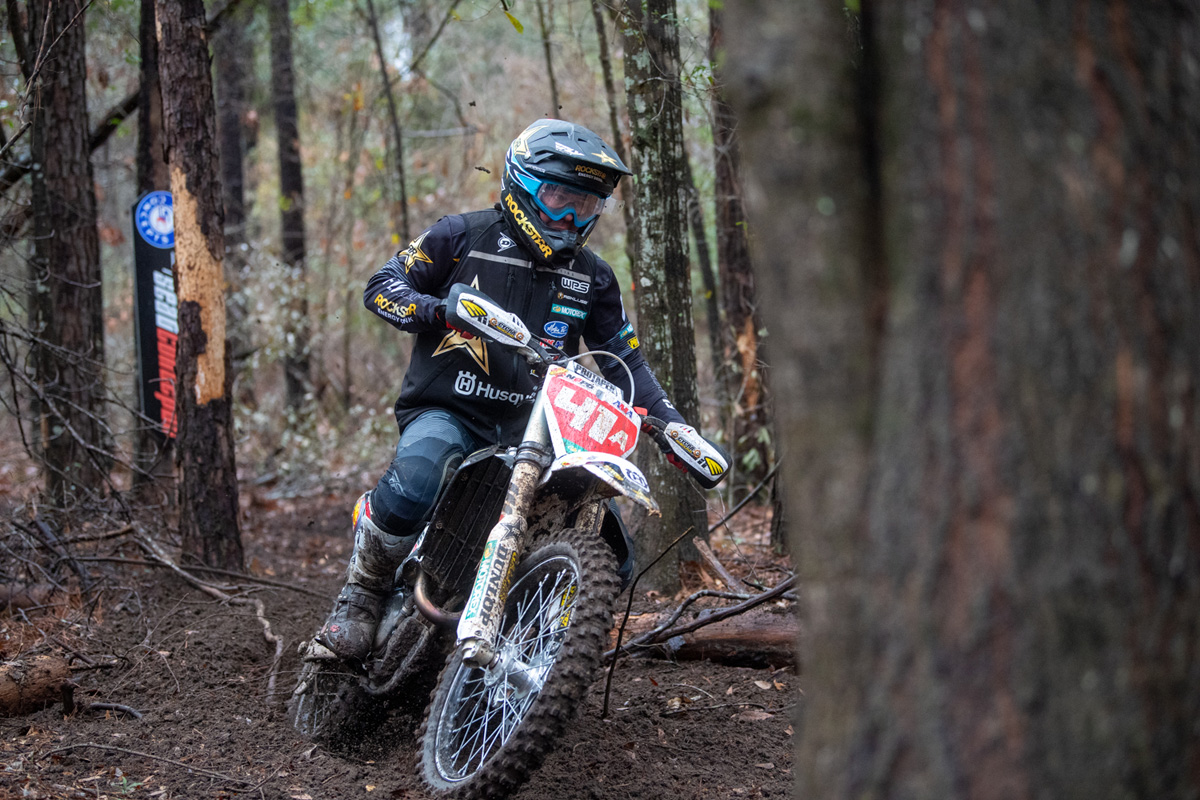 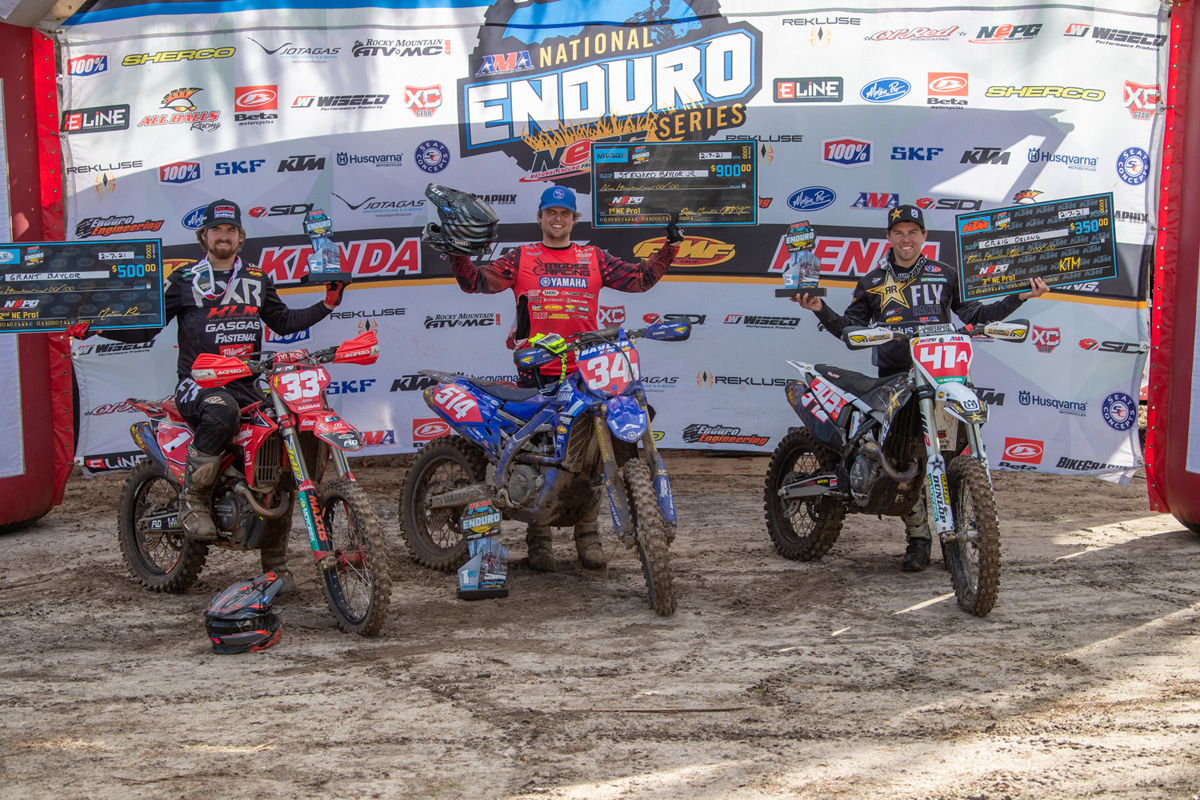 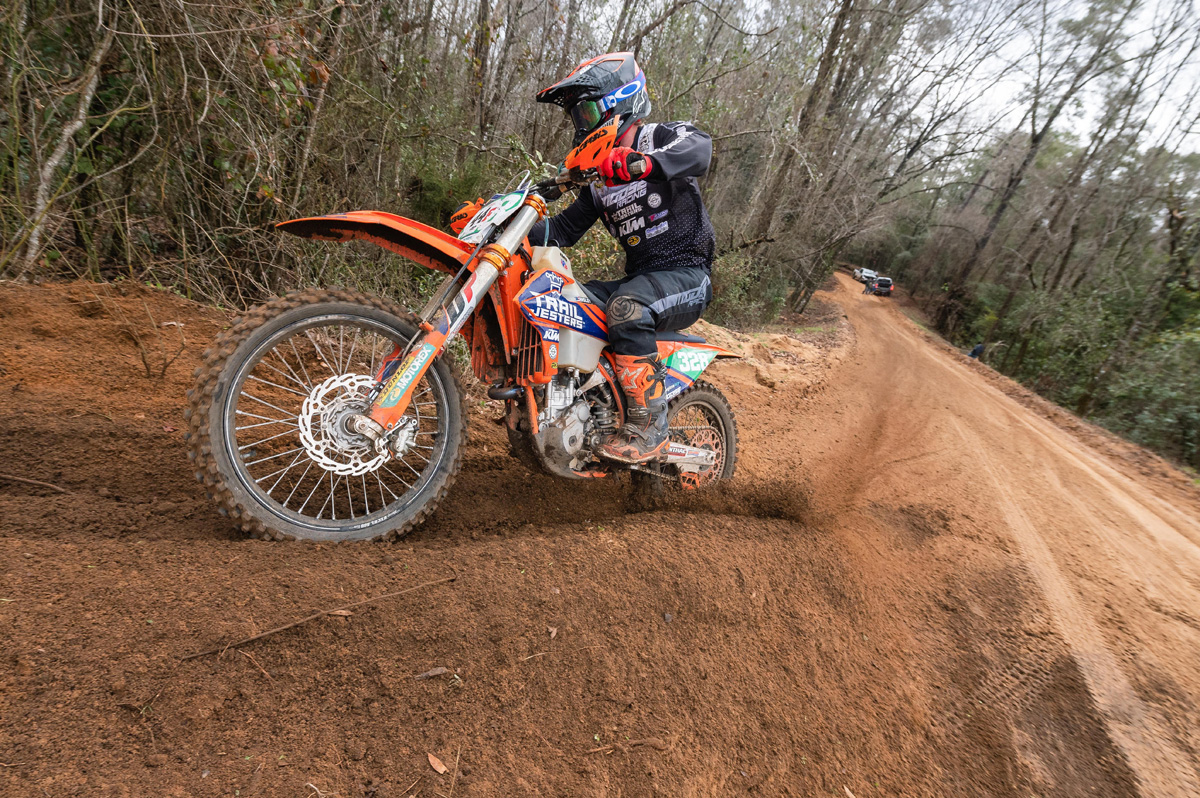 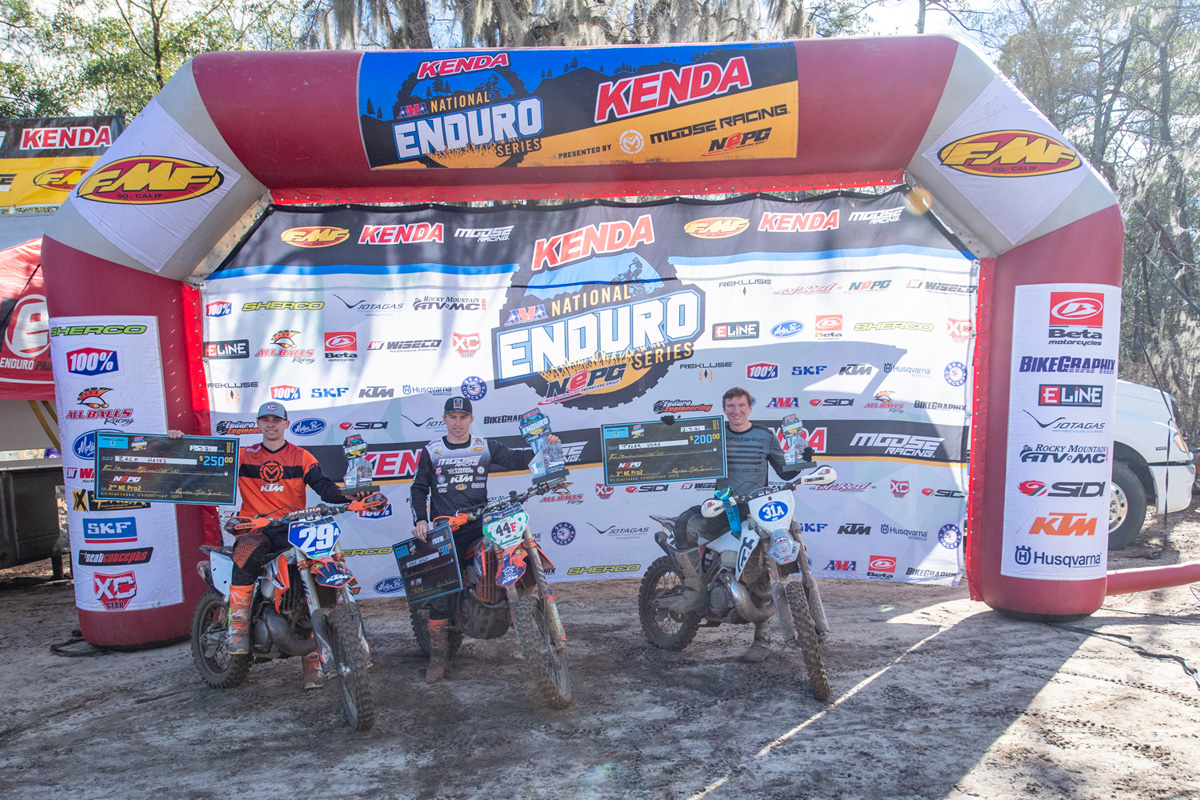 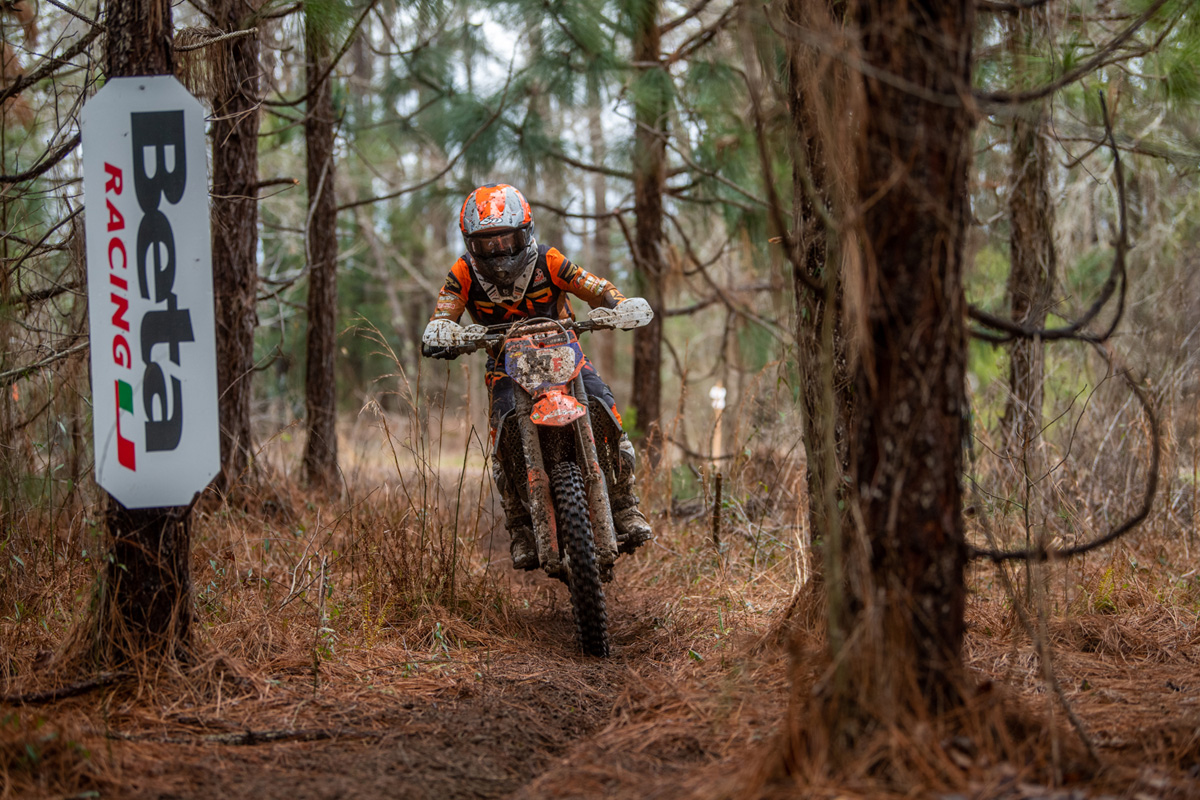 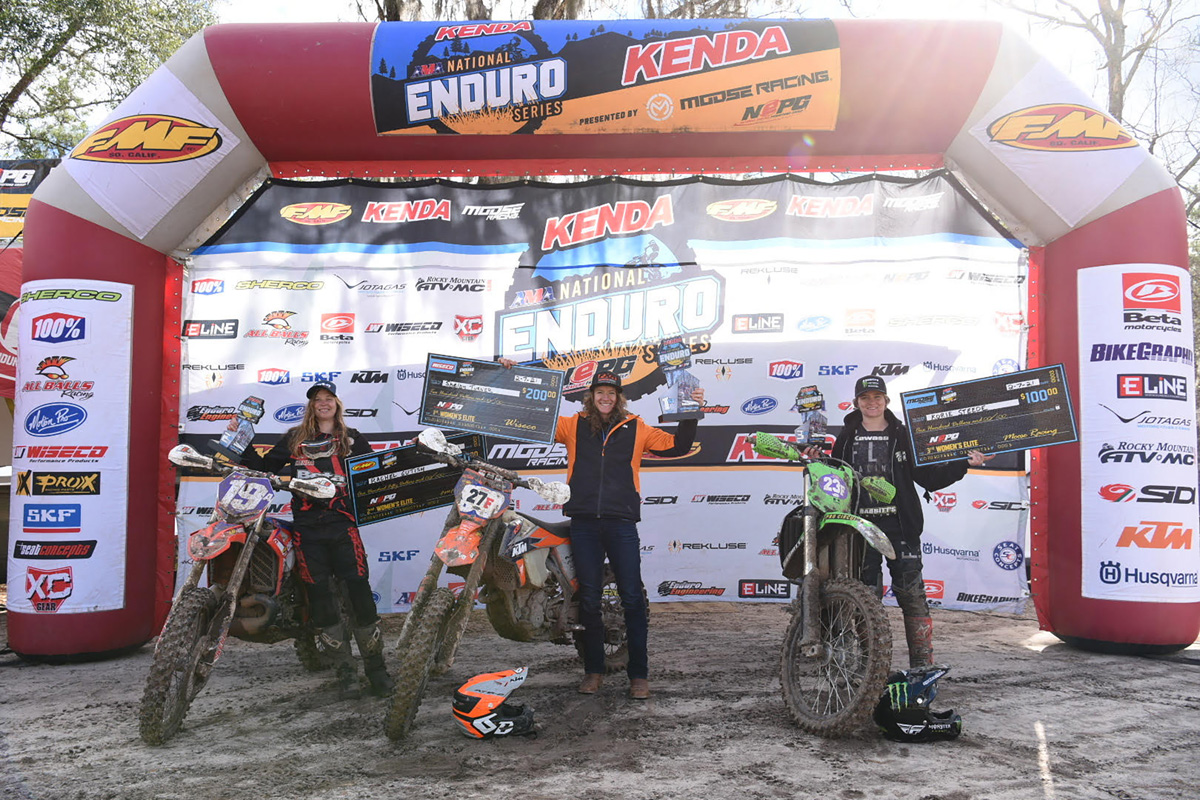 The Kenda AMA National Enduro Series picks right back up where it left off with the Baylor brothers dominating results at round one of 2021, the Sumter National Enduro where over 900 riders started the season in South Carolina.

Not much changed at the opening NEPG round of 2021 if the Sumter National is any indication. Once again, the Baylor brothers were up front with Am Pro Yamaha’s Steward Baylor topping KLM Motorsports/Milwaukee/GASGAS’ Grant Baylor by 32 seconds to claim the first victory of the season.

Heavy rains on Saturday night left the sandy Sumter soil saturated, which made conditions perfect for the record 949 riders who took to the course at 9am.

Steward struck early, winning the opening test by 11 seconds over reigning NE Pro 2 champ Craig DeLong, who’s moved up to the Pro 1 class this season on his Rockstar Energy Husqvarna.

Meanwhile reigning overall champion Grant Baylor got off to a slow start, finishing fifth-fastest in test one on his GASGAS debut. Meanwhile, XC Gear/Enduro Engineering/Husqvarna’s Ryder Lafferty was third in the opening test, ahead of FMF/KTM’s Ben Kelley.

DeLong turned in his best test of the day in test two, three seconds ahead of Kelley for the win. Meanwhile, Baylor’s dropped off the pace in test two, with Steward finishing sixth and Grant finishing fourth, however, the dynamic duo would dominate the remainder of the race, as the two riders accounted for all four of the remaining test wins – each taking two wins.

On a side note, Steward won test four, despite crashing and taking a handlebar to his back, which required stitches afterwards. He left for the hospital immediately after the podium ceremony. “I’ve always ridden really well here in the past,” said Steward. “It was a little rough there at the end. I rode really strong all day so it was a solid Sumter, a solid way to start the season. I came in with Epstein-Barr this year, so a little weak, a little tired, but we did everything we could and did exactly what we needed to do to start this year off.”

Final test showdown for the podium

Heading into the final test, DeLong was just six seconds behind Grant and looking strong. At the finish, however, Grant managed to pull away from the Husqvarna rider, taking the runner-up slot by 34 seconds.

“In the first test I just struggled to find my flow and just got arm pump really bad and struggled to hold on,” said Grant. “By the third test I seemed to start finding my flow a bit. I think I was back in about fifth place after the first two tests. After maybe the fourth test I bumped up to second overall. Then going into the last test there, it was pretty tight between me and Craig.

“I knew I had to drop the hammer [and] go through there without making any mistakes. I just tried to ride really smooth and fast and it seemed to be my best test of the day.”

DeLong’s third-place finish marked his first podium in the NE Pro 1 class. “Coming in, I wanted to be in the mix and be competitive,” said Delong. “I didn’t expect a podium, but I’ll take it for sure. Right from the get-go, I kind of started off really well and maintained it. I had a couple crashes, but other than that it was a pretty solid day.”

Husqvarna/Max Motorsports/FXR Racing’s Evan Smith turned in a nice ride to finish fourth after some extended time off the bike last season. “I was super happy to get back to racing. I’ve been waiting a long time for that,” said Smith. “Test one started out pretty reserved, trying to not make any mistakes or pump up or anything, just kind of feel it out. I lost a good bit of time in there and it kind of dug me in a hole. I was definitely in podium contention for a while and was working hard to do that, but had a good fall in test five that rung my bell a little bit. All in all, I felt really good on the bike and I was super happy to be back riding.”

Ryder Lafferty turned in a solid ride to start off the season, rounding out the top five. “I didn’t make a whole lot of mistakes, and I just gave it the berries all day,” said Lafferty. “I think we were all really close. I felt like I gave it my all. Just came up a little bit short. But fifth for the first one is solid.”

After running up front for the first half of the race, Ben Kelley was FMF/KTM’s lead rider but suffered two big crashes in test four and had to settle for sixth. “In test four I kind of just fell apart. I had one pretty big crash, and then closer to the end of the test I had another big one and smacked my knee on a tree and it kind of took the wind out of my sails.”

His KTM teammate, Josh Toth was still riding with an injured hand and finished in 11th place.

Making his only National Enduro appearance of the year, Trail Jesters Racing/KTM’s Jesse Ansley turned some heads by winning the NE Pro 2 division in seventh overall. “I didn’t start off that great,” said Ansley. “I went down in the first test and kind of got hung up where I couldn’t get my bike out of the trees. In the next test I just gave it my best and I ended up second and [again] second in the third test. I made sure I just stayed consistent that last test and brought it home for a win.”

After missing half of last year due to an injury, Coastal Racing GasGas’ Ricky Russell returned to action to claim eighth in Sumter, edging KTM-mounted Zach Hayes by two seconds. Hayes claimed second in the NE Pro 2 class with his ninth place finish.

Alex Lugar won the AA class on a Kawasaki, finishing 1m 31s ahead of KTM-mounted Michael Delosa. Nathan Rector was third on a KTM.