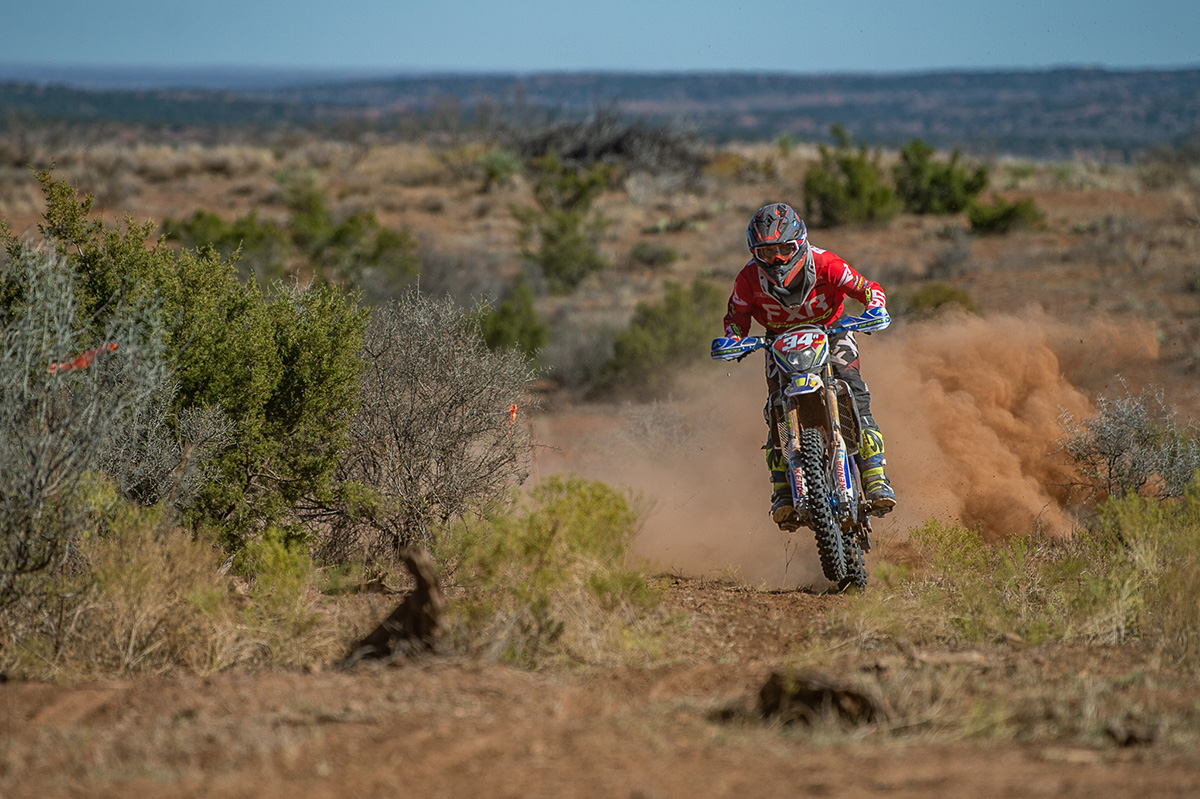 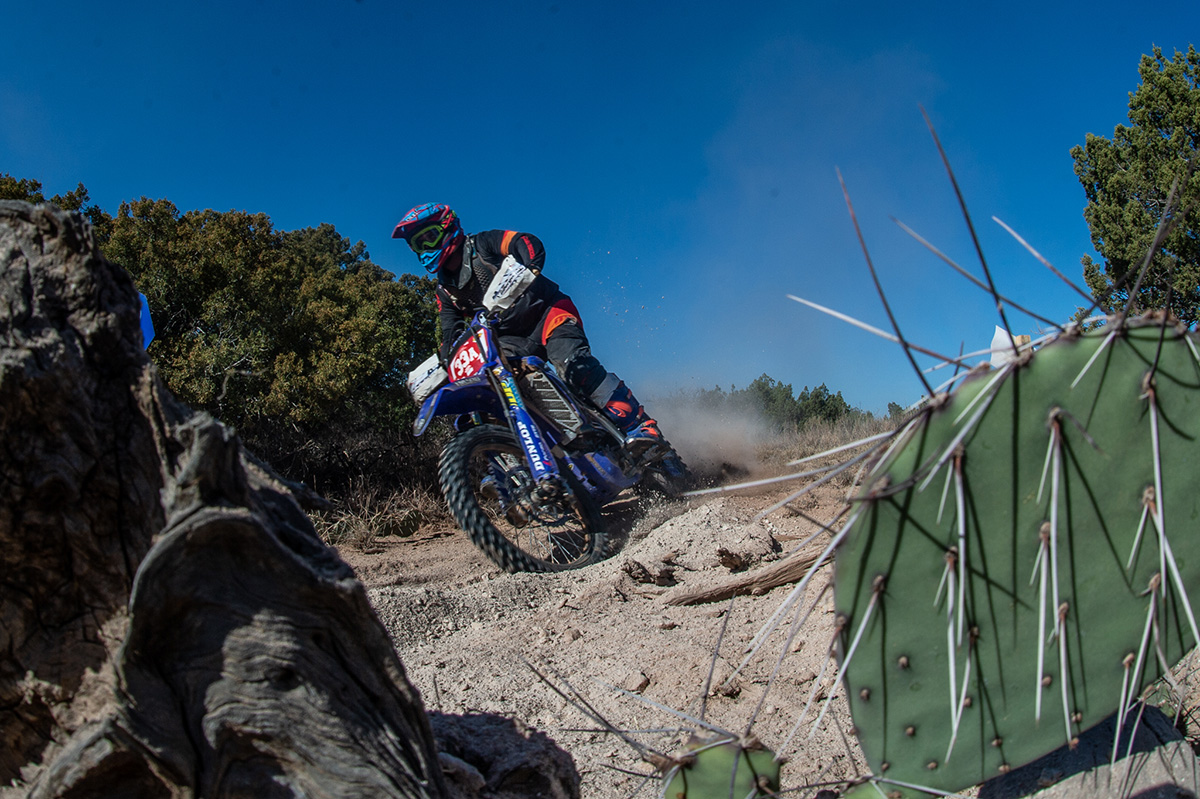 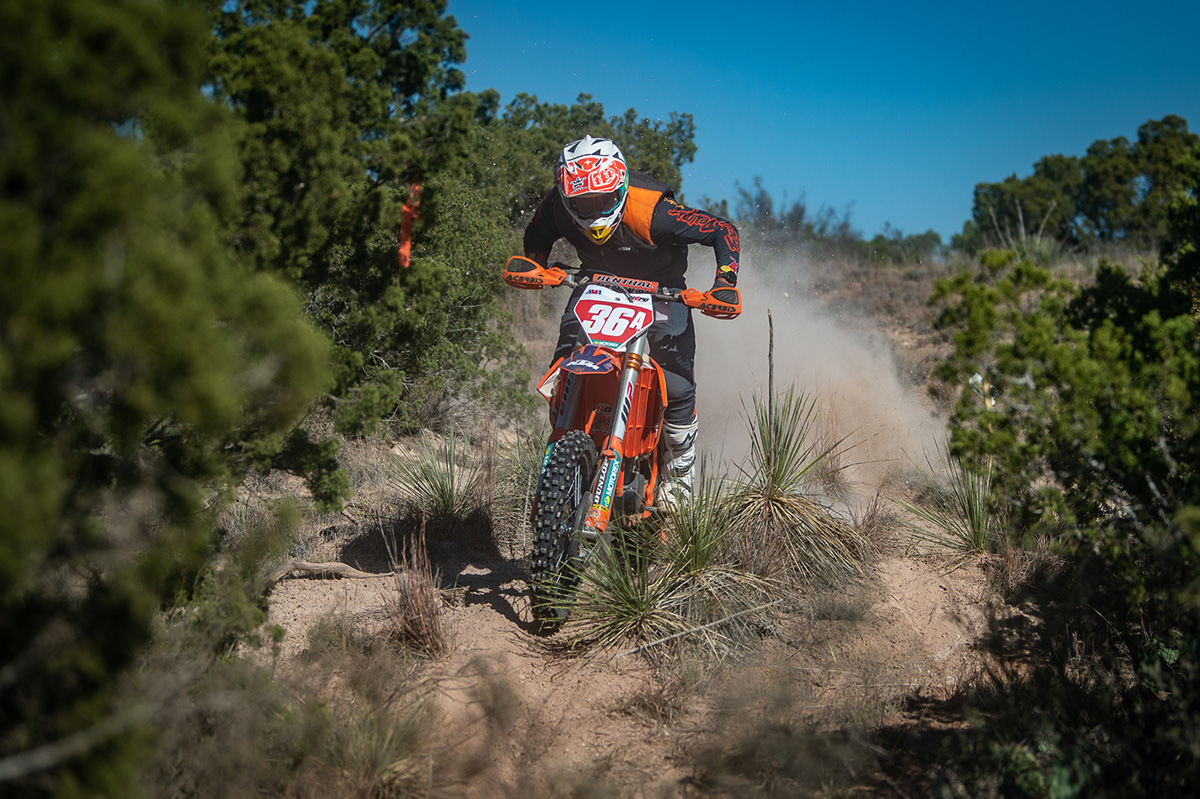 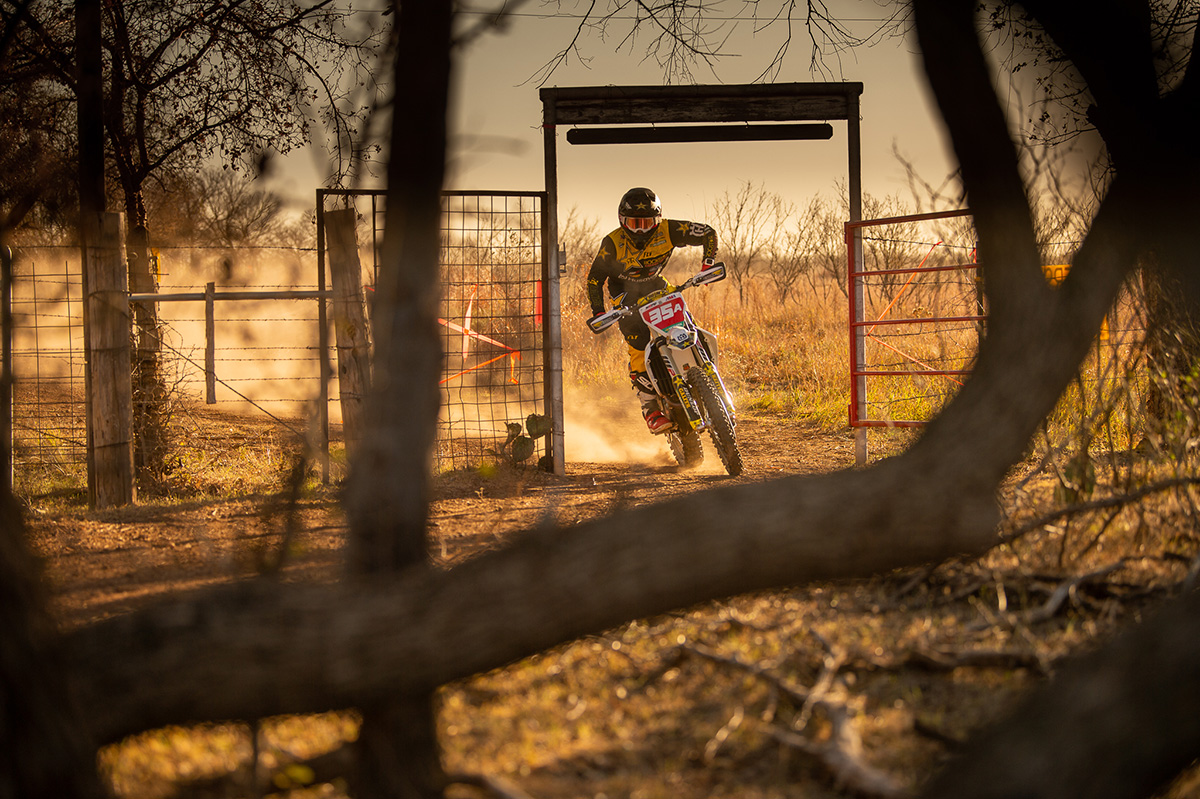 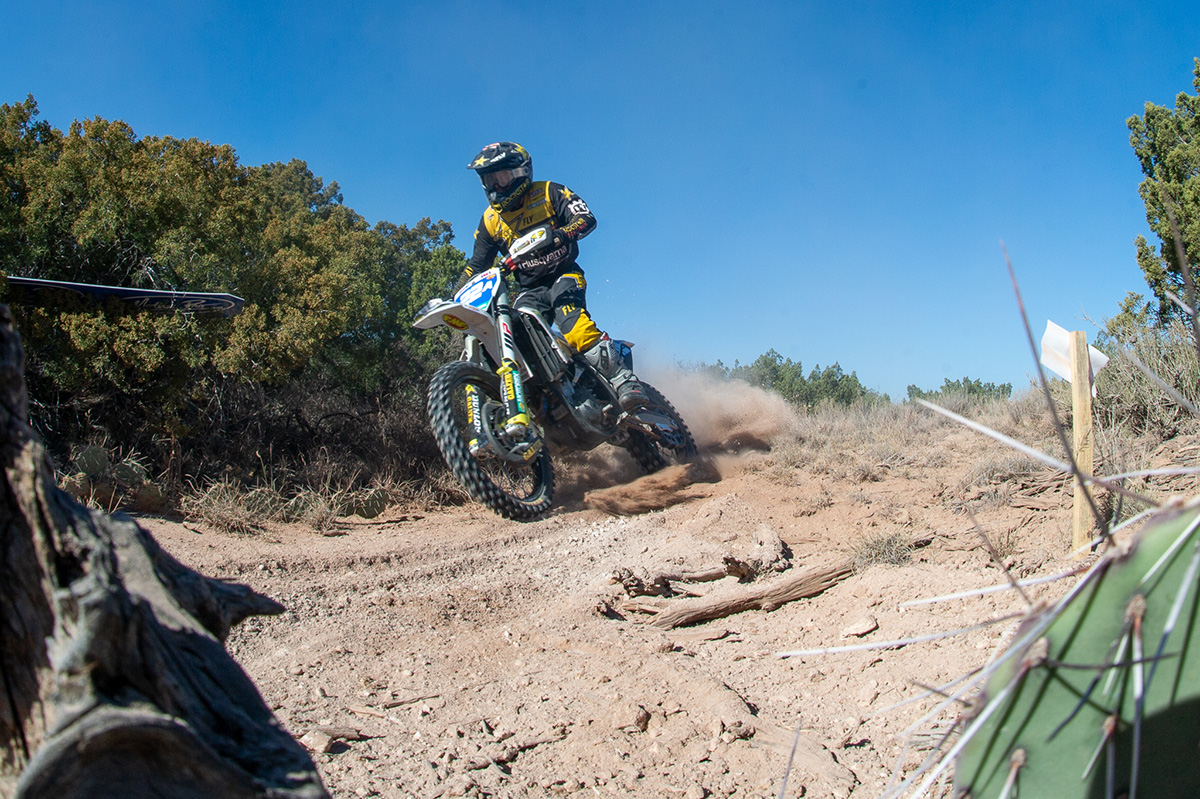 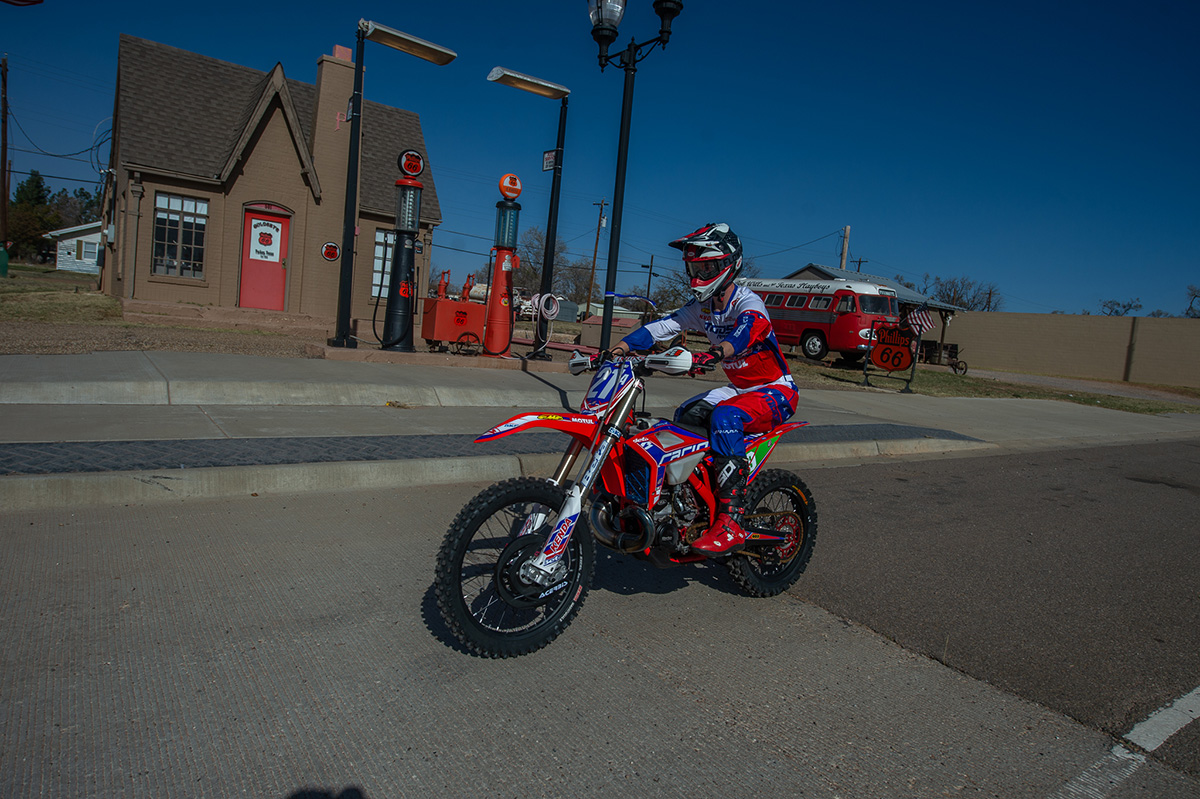 Grant Baylor claims his and Sherco’s first AMA National Enduro title at the Caprock Canyon National Enduro with a win over his brother, Steward Baylor – Craig DeLong adds to his 2020 title tally with the Pro 2 class crown.

Though he knew 11th or better was enough to secure the title, Grant Baylor started slow in the fast and sparse West Texas terrain, picking up the pace on his FactoryONE Sherco after the first two tests and finishing off the day winning two of the five tests, and second in another, to pip his newly signed AmPro Yamaha riding brother Steward for the overall by four seconds.

“Obviously I was a little bit nervous, but I knew all I needed to do was just get through the race today and come out of it healthy,” admitted Grant. “As long as I came out healthy and the bike finished, I basically had the championship. So that was my goal. I didn’t doubt the bike. The bike has been solid all year. Other than that, I just had to keep it on two wheels, and I did all day. I just wanted to stay smooth and I ended up getting the win here today.” 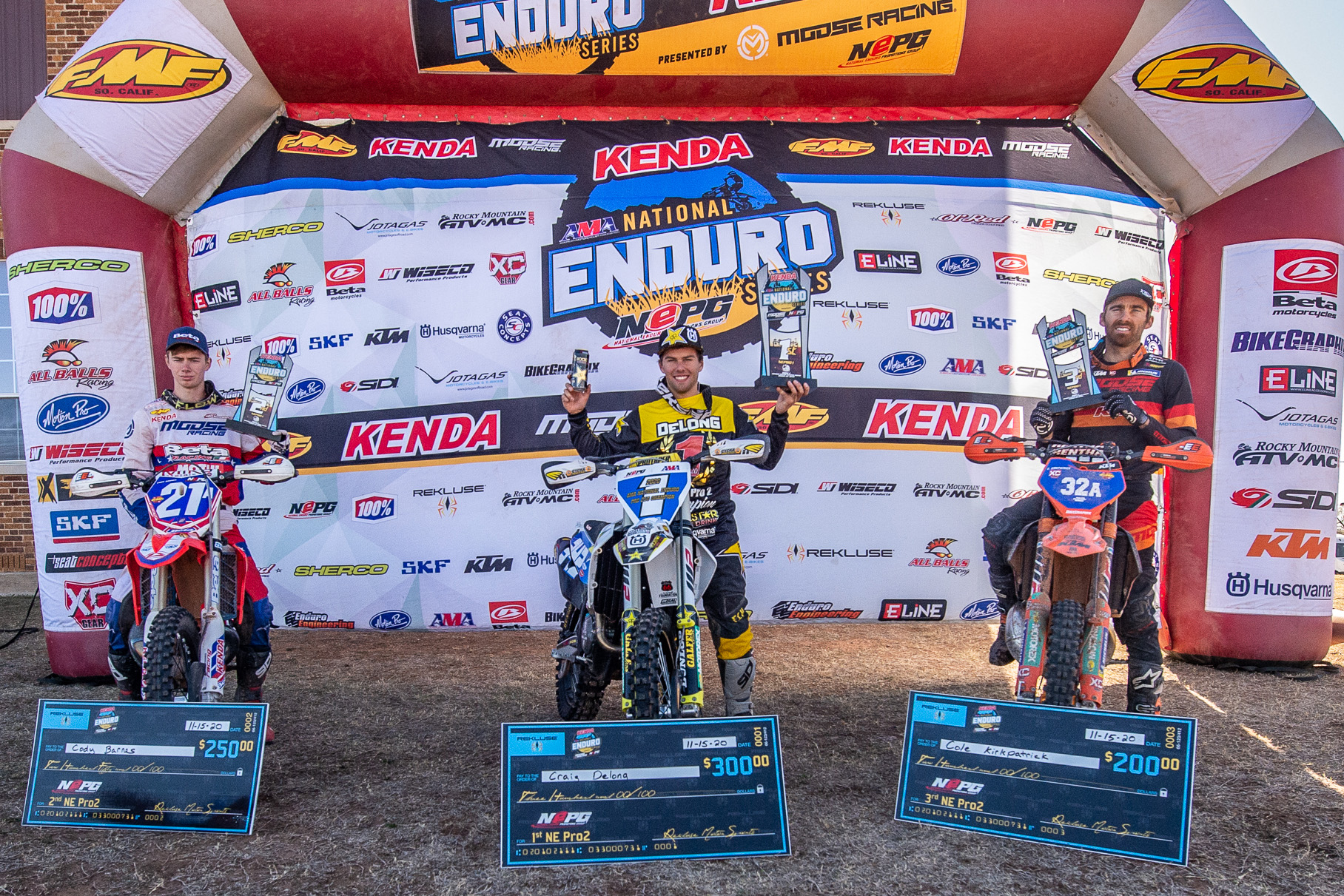 Grant wasn’t the only rider who clinched a championship in Texas. Rockstar Energy Husqvarna’s Craig DeLong came into the event holding a slim, six-point lead over Beta USA’s Cody Barnes in the battle for the NE Pro2 title. Coming into the race, DeLong had amassed four wins to Barnes’ two, but Barnes backed up his wins with five runner-up finishes, compared to two for DeLong.

DeLong got off to a strong start, winning the opening two tests. And while Barnes won the final three, he came up 20 seconds short to DeLong in the end, giving the NE Pro 2 class title to DeLong.

“I tried to start off with a good opening test,” said DeLong, who also clinched the Pro2 title in the GNCC series the week before. “It was a long test, so if you could get a decent gap after the first one it would make the day a little bit easier. That’s what I did. I got a good test under me and had a decent gap. I kind of just got my lead early and kind of knew that I just had to make no mistakes. It was a great day. I’m happy to get another championship here. Last weekend was a big weight off my shoulders so coming in today was just going out and getting the job done.”

Final round was no anti-climax

With Grant needing only to finish 11th to claim the Pro 1 title, the Texas race might have been anticlimactic, but there was still the matter of the round win and Steward piled on the pressure to actually leading by about 25 seconds heading into the final test.

“Luckily Steward had some issues with the dust in the last test,” said Grant. “It was just so dusty. There were a couple of AA riders right in front of Steward, and they were hindering me somewhat too. You got close to those guys and it took almost two miles just to catch them after you caught their dust. You would catch their dust, and then two miles later you would catch them. Luckily Steward had Cole Kirkpatrick out there in front of him the last test and I ended up edging him out by just a few seconds, so it was awesome.” 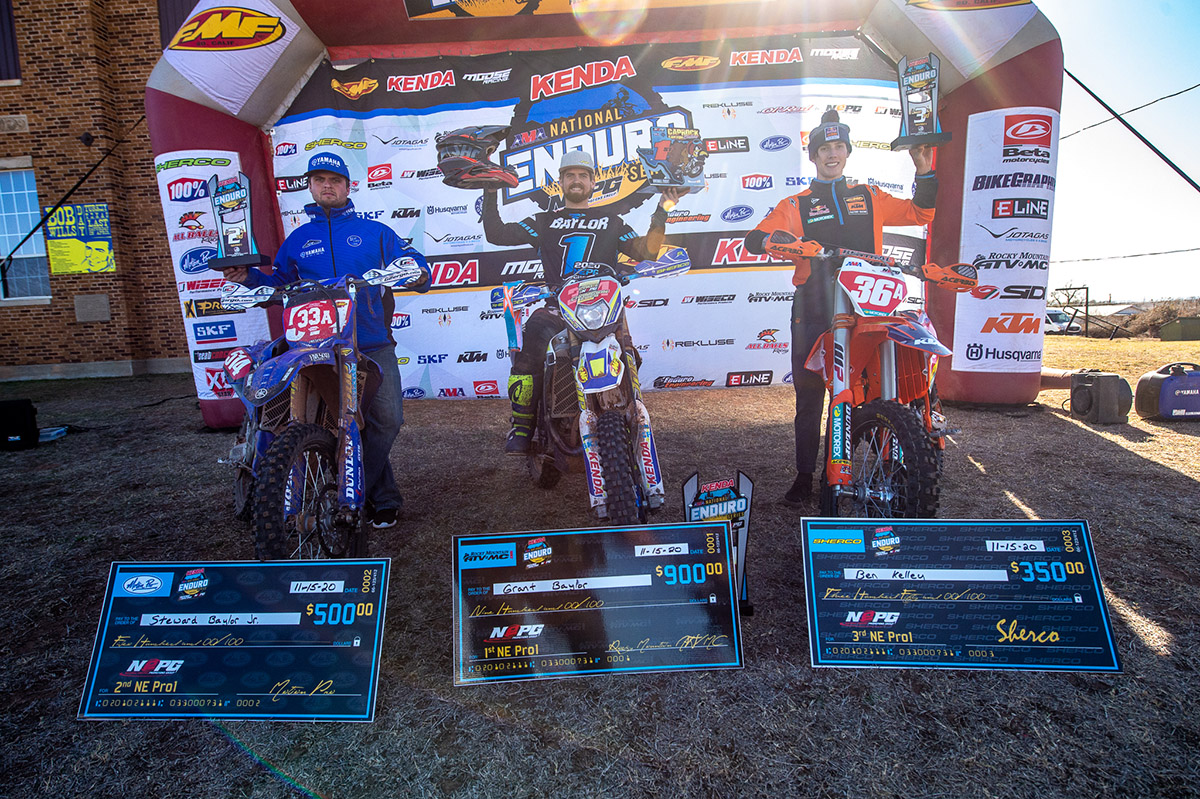 Steward, who just signed with AmPro Yamaha for 2021, came just a few lappers from taking the win. “I felt like I was definitely the best rider today,” said Steward. “Starting off at the front of the pack puts you right at the back of the pack of the AA’s. I had to deal with a lot of dust. I think that was the game-changer there at the end.” Despite missing round two, Steward closes the season in second place overall ahead of Josh Toth.

Switching back to his KTM 450 XC-F for the Texas race, FMF/KTM’s Ben Kelley put in a solid ride to round out the podium, his 3-2-4-3-3 finishes in the five tests were good enough for third overall. “It was a good day overall,” said Kelley. “I decided to ride the 450 and I think it was a good choice in this terrain, although it was completely foreign to us. But I think that’s what made it fun. I felt surprisingly well. Had a bit of arm pump, but overall I had a smooth day. I stayed off the ground which was nice.”

Rockstar Energy Husqvarna’s Thad Duvall edged Josh Toth by just 16 seconds to grab fourth ahead of the FMF/KTM rider. “I started really strong,” said Duvall. “I’ve been trying to work on my sprint speed just right off the gate, so I felt like I made an improvement there, but I just had a couple bad tests. Just couldn’t stay off the ground and made a lot of mistakes. The last time I was in Texas I almost won it. So, I think I had high expectations to come in to try to win, and just didn’t pan out the way I wanted it to.”

Ryder Lafferty was four seconds off Duvall’s pace in sixth. The XC Gear/EE/Husqvarna rider had a spectacular ride in test three, finishing second-fastest. But sixth-fastest in the first and last tests dropped him out of the top five just ahead of Evan Smith seventh overall.

Craig DeLong claimed eighth overall for his ride that carried him to the NE Pro2 title, while Cody Barnes finished ninth overall and second in class. Local boy and two-time National Enduro winner Cole Kirkpatrick rounded out the top 10 on the Gnarly Routes KTM and was third in the NE Pro2 division. 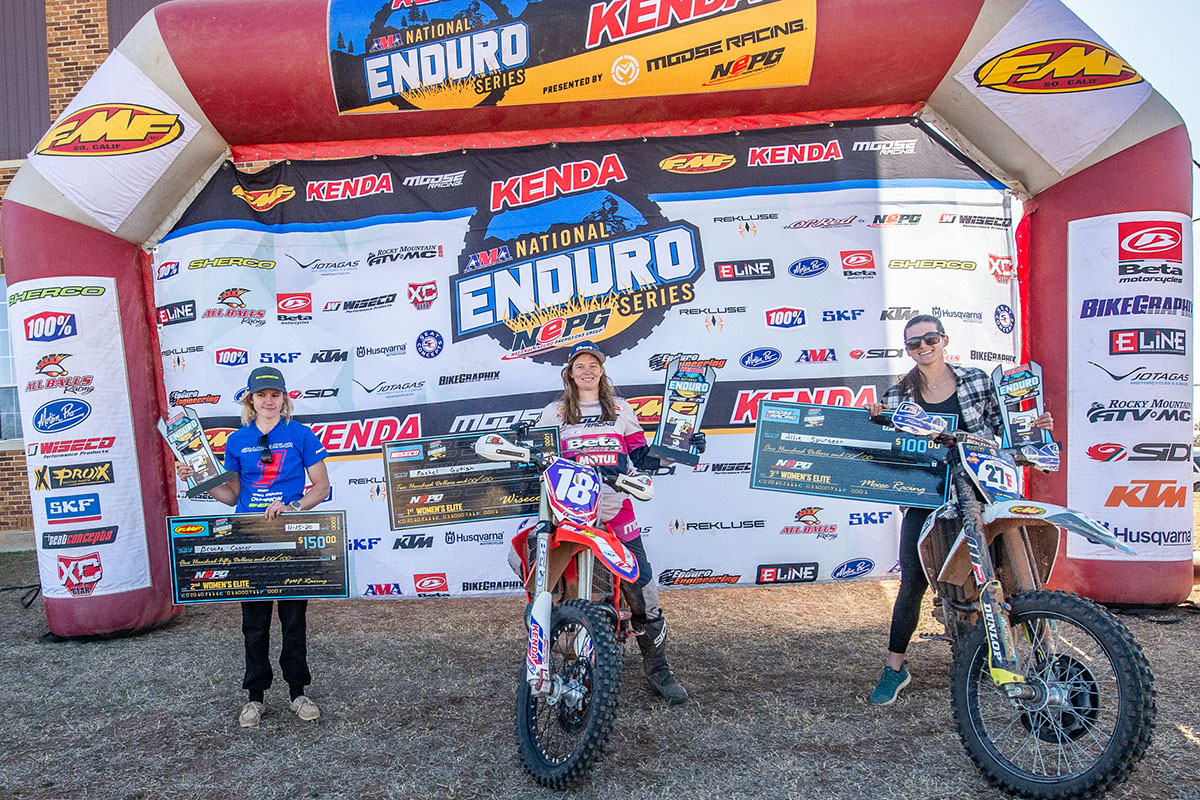 “It was very interesting not having cell service and not really knowing how I was doing,” said Gutish. “I like to know. I know some people don’t, and some people do. But for me it’s nice to just know if I need to push a little harder, or if I can afford to back off. I liked this event. I wasn’t really expecting to. I’m usually not a fan of dusty and dry, but the course was super sick when I could see I had a good time.”

Ryan Grantom won the AA class ahead of fellow KTM riders Will Sievenpiper and James King. Meanwhile, JD Friebel topped the 30+ class on a Husqvarna ahead of KTM rider Austin Franklin and Tim Wamsley on a Husqvarna.