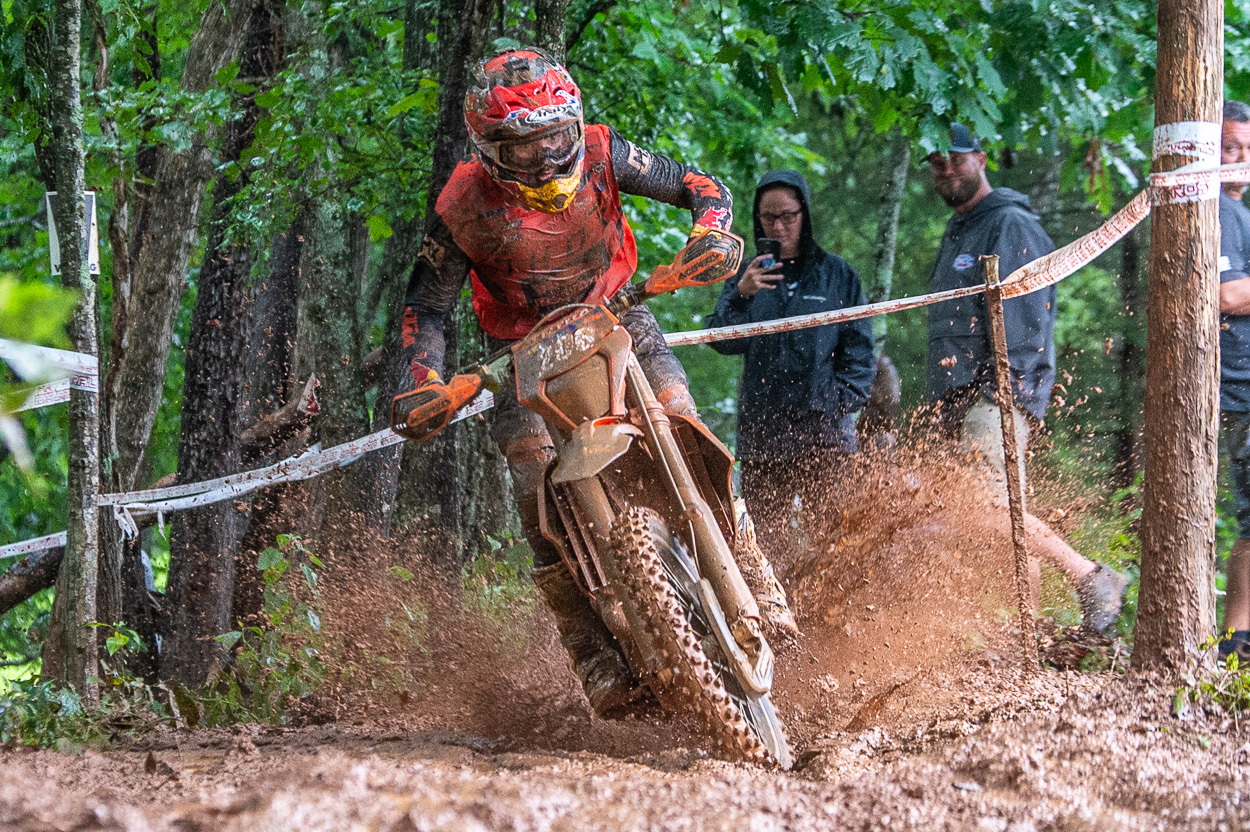 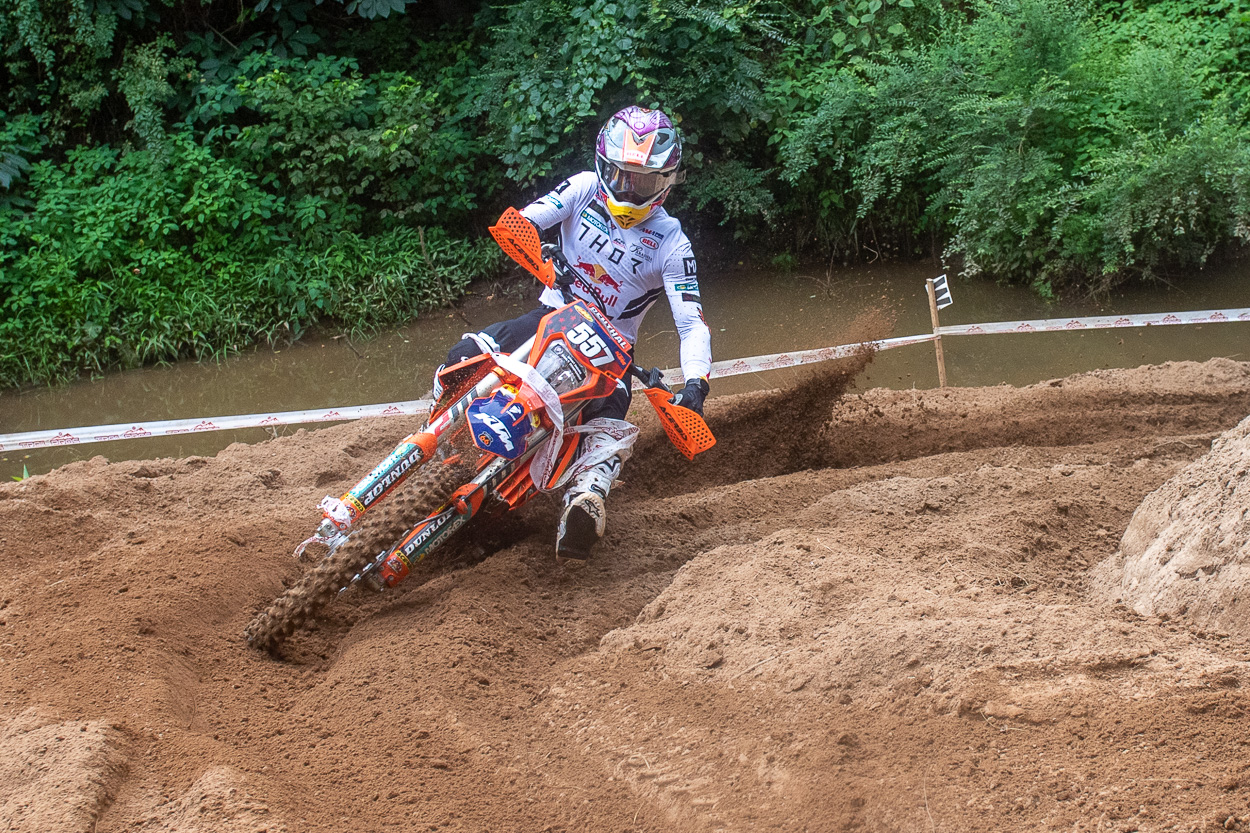 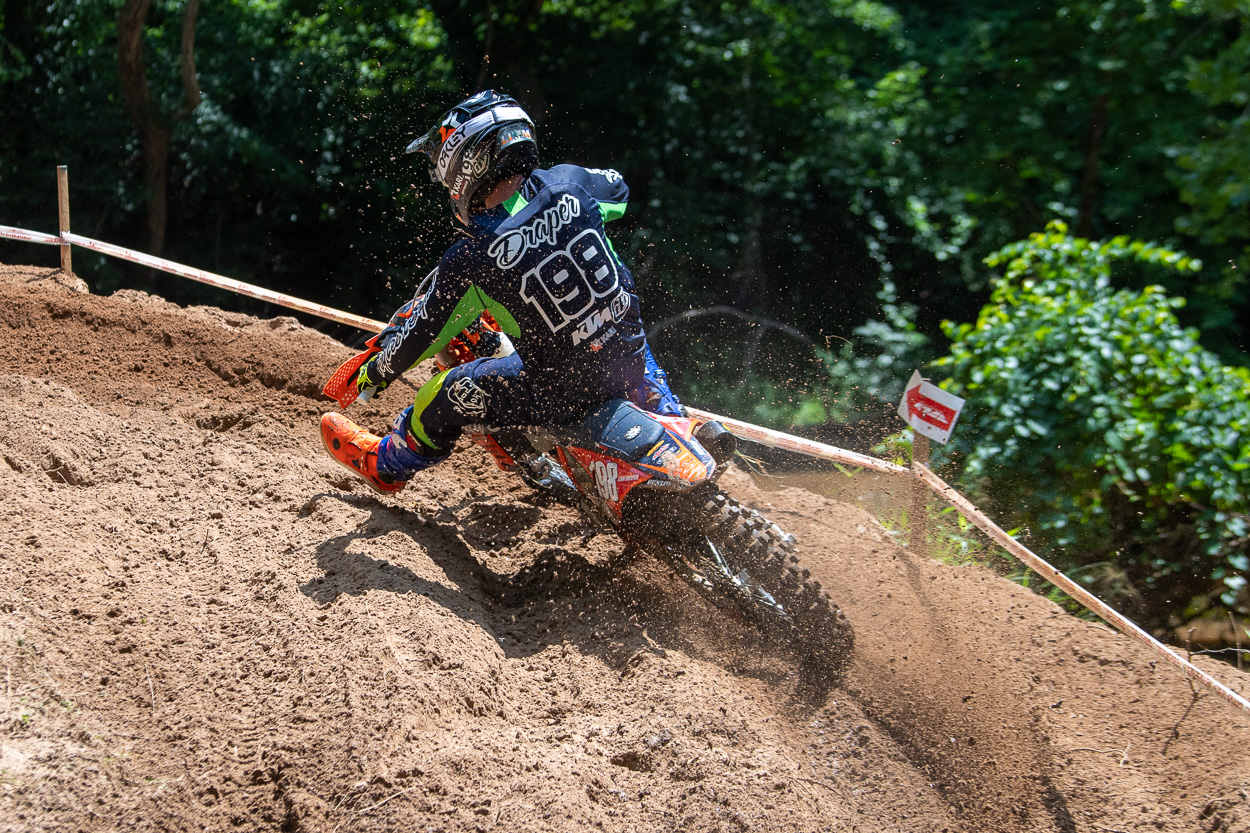 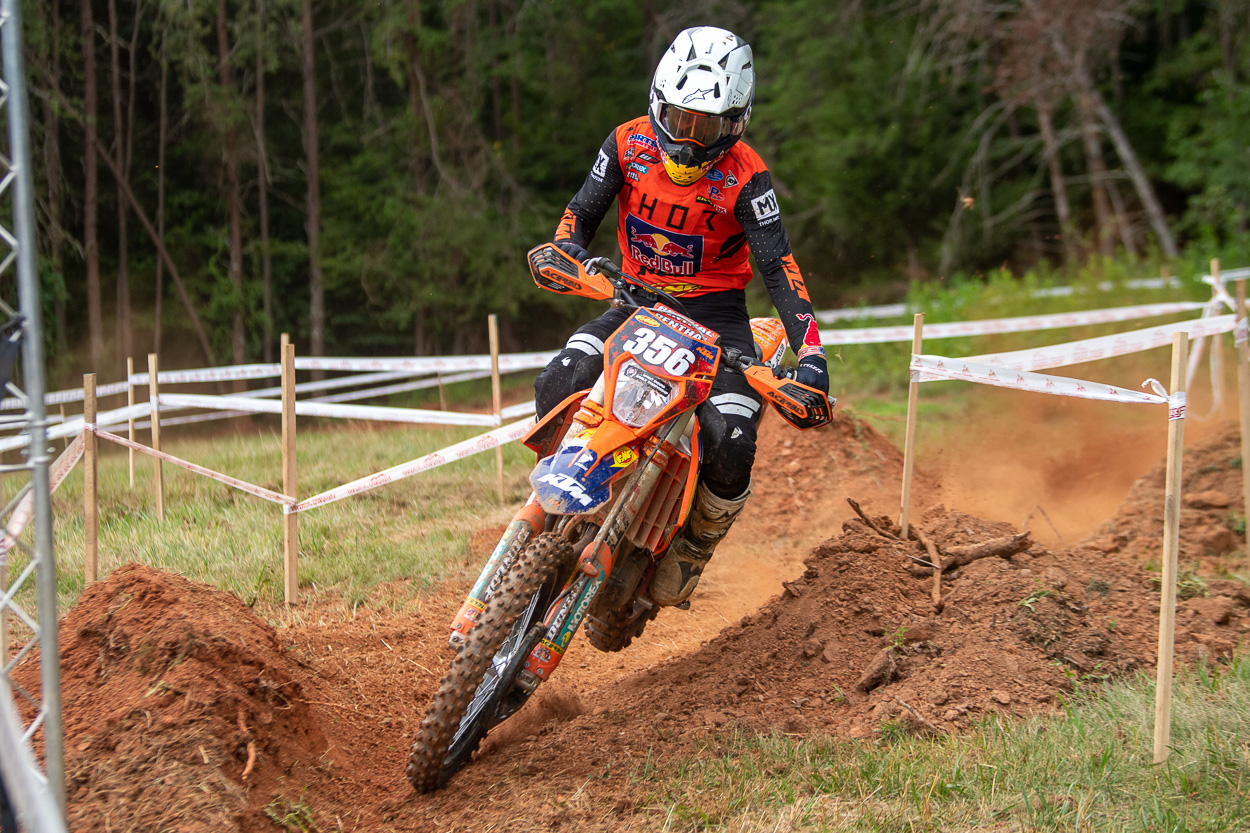 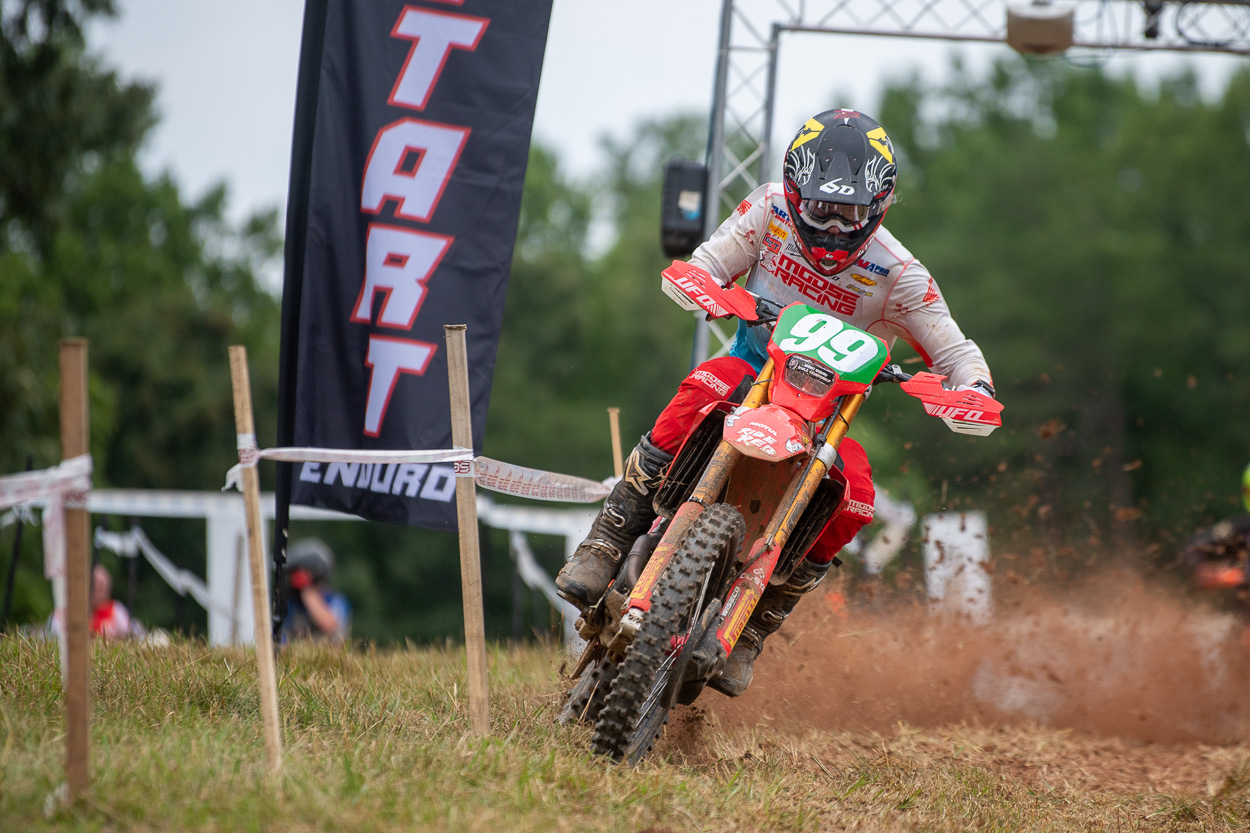 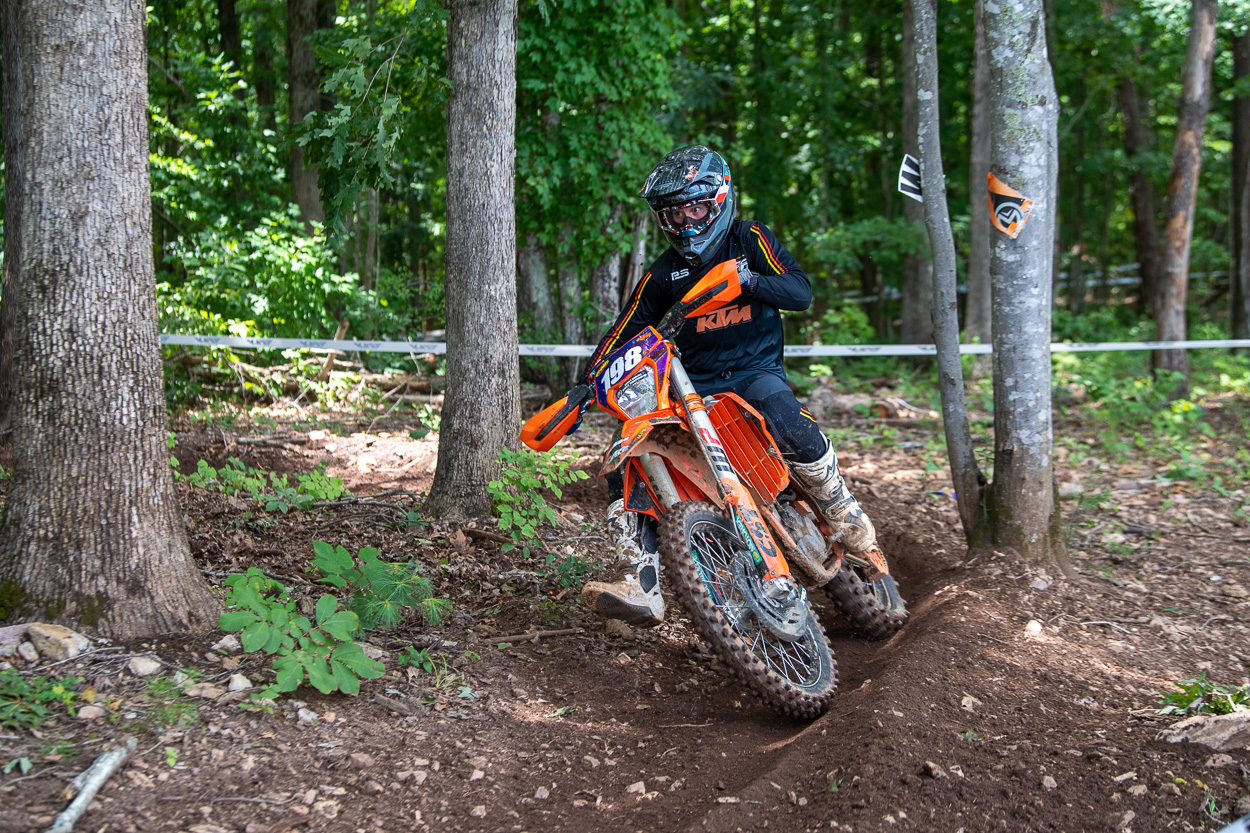 Held in the summer break for most of the US off-road series’ the two days racing in Virginia was chance for riders to get their eyes in over 12 timed tests. USA ISDE team manager Antti Kallonen held the annual “ISDE Camp” in conjunction with the Sprint Enduro World Championship so the US squad could start to get used to FIM regulation tyres and the maintenance work that is part of the ISDE held in Le Puy en Velay, France, from August 29 through September 3.

Team USA Trophy team members dominated the podium with Josh Toth most convincing off all winning five of six tests on Saturday, losing one of the Cross tests to Tely Energy Racing KTM’s Liam Draper of New Zealand.

After a steady rain moved into the area on Sunday, leaving the track slippery and with standing water, Toth continued to stretch his lead, despite only winning three of the six remaining tests.

“The last few times I’ve raced I’ve felt really sharp, so I felt good coming into this weekend,” said Toth. “I was super excited to come to this race, and I came out swinging in the first test. Once I saw that I won that first one and saw where everybody was it gave me a confidence boost for the rest of the weekend.”

Kailub Russell will aoso be part of the USA ISDE team and came out swinging with the first Cross test win in Sunday’s mud as well as the first Enduro test, however, Toth gained nearly 10 seconds on Russell in the second Enduro test, which pretty much sealed the result.

“Today, in the mud, it was tricky being the first rider out,” said Toth. “There was a ton of standing water and there were no lines so I was kind of breaking the course in. But other than the first two tests, I felt really good on Sunday.”

Because of Russell’s win in the first Cross test on Sunday, he took home the $100 “spoiler” award for keeping Toth from sweeping all six Cross tests, for which Toth would have won a $1200 “bounty” if he had completed the feat.

Russell came out of retirement to compete in the race, and admitted it took a while to get in the hang of things.

“It’s tough to get back into it when you’re not in the groove,” said Russell. “I was hoping for a little bit more, but I can’t hope for too much. Josh rode really well. So did Liam. I was just kind of off touch a little bit all day.”

Tely Energy Racing KTM’s Liam Draper was sitting second after Saturday’s event, but settled for third overall after Russell picked up the pace on day two.

“I felt really good on Saturday,” said Draper. “The Cross test, I felt I was on it all weekend. The Enduro test really hurt me, though. That’s where Kailub caught me; I would beat him in the Cross test and then he would kill me in the Enduro test.”

Getting used to FIM-approved tyres for France

Rockstar Energy Husqvarna’s Craig DeLong turned in an impressive ride for fourth, with especially fast times in the Enduro test. “I felt good in the Enduro test,” said DeLong. “I need to work on my grass track skills. This was my first time using DOT tires and I struggled a bit (the event also doubled as an ISDE camp for Team USA, so the riders used the “eco” tires to get used to them for the event in France). I struggled early on yesterday just trying to figure it out, the first two tests, then I finally got the hang of it.

“The enduro test was like a national enduro so I really enjoyed it. A little tighter, more like remember your lines, remember your marks. I like that stuff because I can remember that stuff kind of pretty well. So, that was fun.”

Despite having an up and down weekend, Phoenix Honda Racing’s Cody Barnes won the Pro 2 class with a fifth overall finish.  He too was struggling with the DOT tires. “I had a couple dumb crashes on day one in the cross test; kind of frustrated,” said Barnes. “It wasn’t where I wanted to be with the comparison to other guys’ times. I need to do some homework on riding with these tires and just getting more comfortable so that we have the best result in Six Days.”

RPM Racing KTM’s Dante Oliveira, who usually races on the west coast, was a bit out of his element in the eastern woods, but still came away with sixth overall.

“It was a good weekend playing around over here,” said Dante. “It was cool to come out here and do it, but definitely not where I wanted to be at all. My little brother was smoking me in half these tests, so I got a lot of work to do. But all in all, a good weekend.”

Top Pro-Am rider was Jason Tino in seventh overall with Forbes Racing KTM’s Cole Forbes winning the 250 A division and taking eighth overall. After getting off to a rough start on Saturday, Cade Henderson (KTM) put together a strong ride on Sunday to finish ninth overall and second in the Pro-Am class. RPM Racing KTM’s Mateo Oliveira rounded out the top 10.

KTM FXR’s Brandy Richards topped the Women’s Pro division, winning seven of the 12 tests across this weekend as she too gets ready to defend her ISDE Women’s crown. “My first day was really good; the cross test was sweet,” said Richards.

“The Enduro test, I kind of struggled a little bit, but just kind of stayed up and consistent. I won every cross test yesterday and then today obviously it rained this morning, so it was super muddy and I was just getting used to it. I don’t get to ride mud like this, so my first cross test and enduro test were sweet. I loved it. Then it just progressively got worse. It got slicker. It got gnarlier.”

Trail Jesters Racing KTM’s Korie Steede won the remaining five tests for second, while Bonanza Plumbing KTM’s Rachel Gutish only raced the second day due to a prior commitment and finished third.