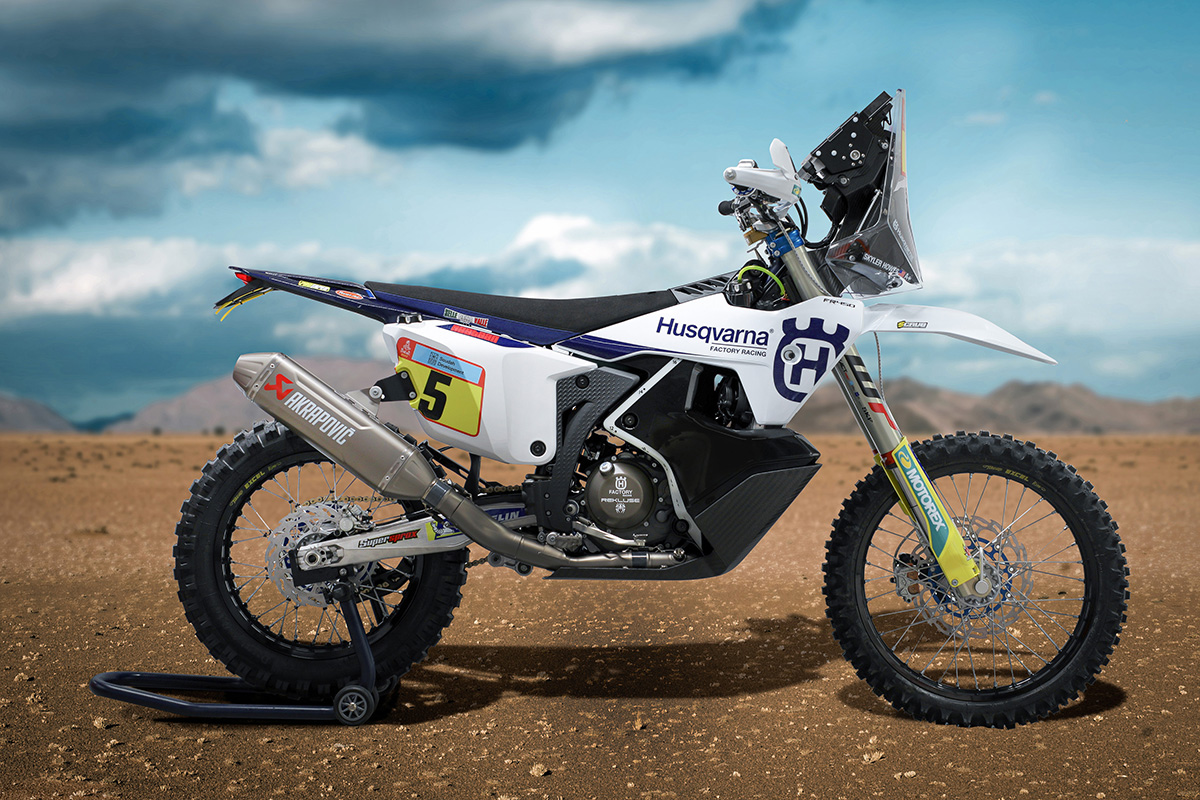 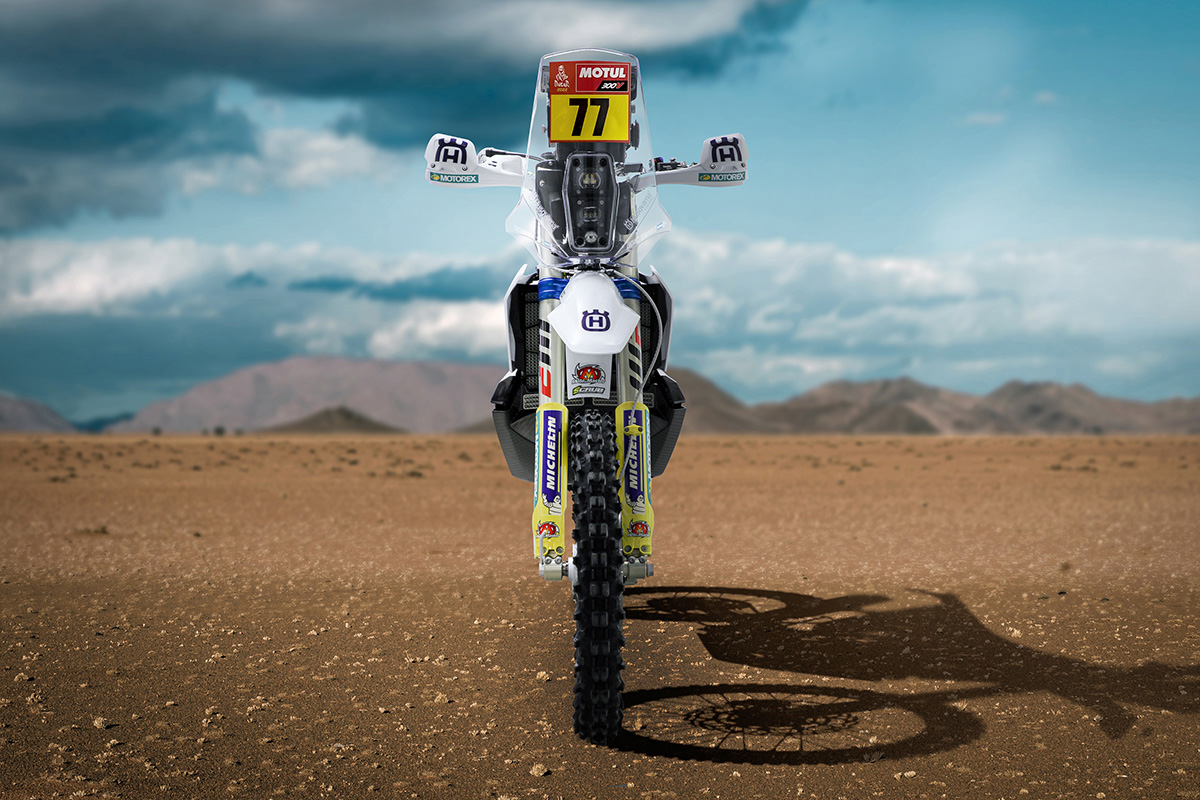 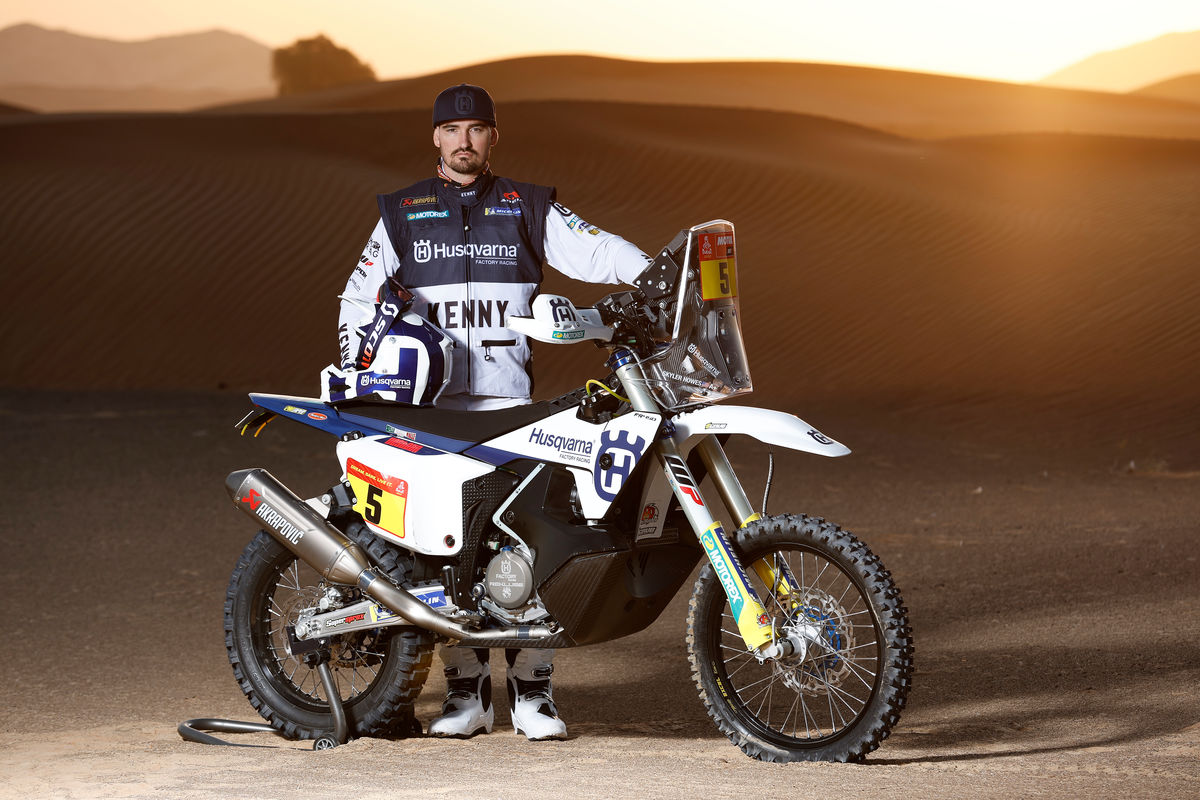 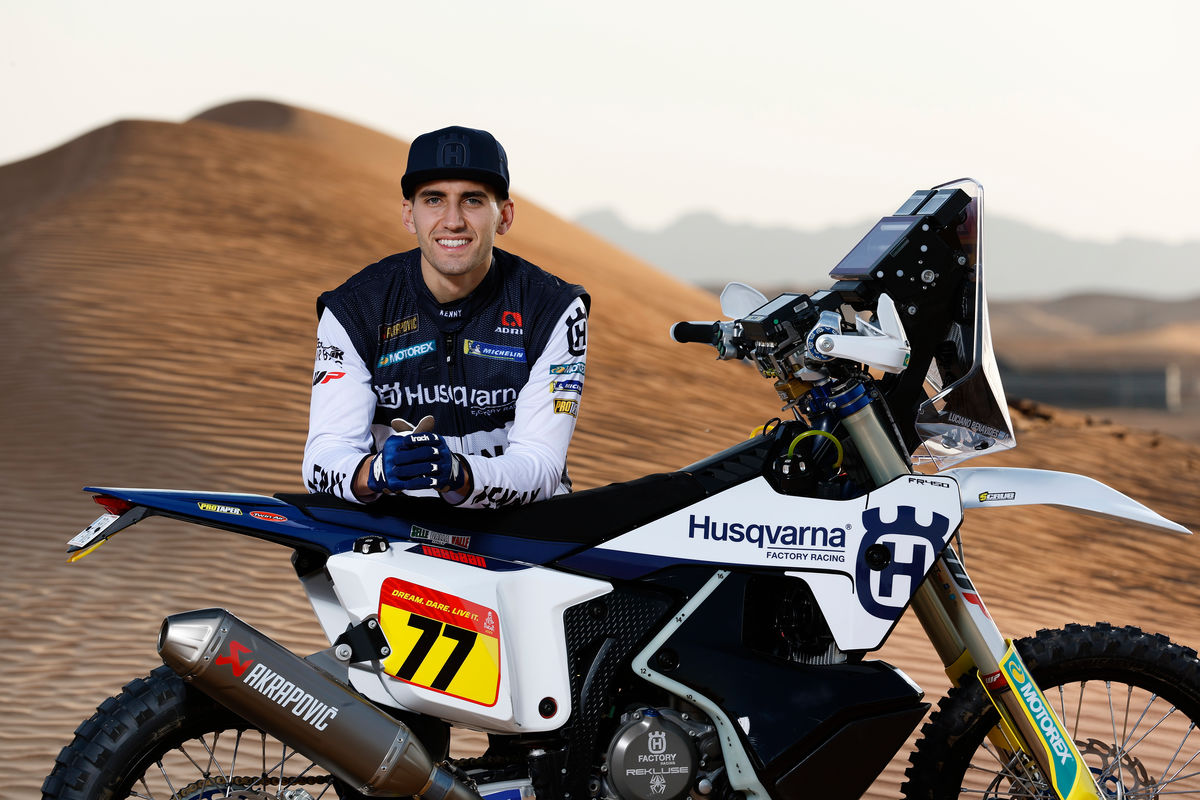 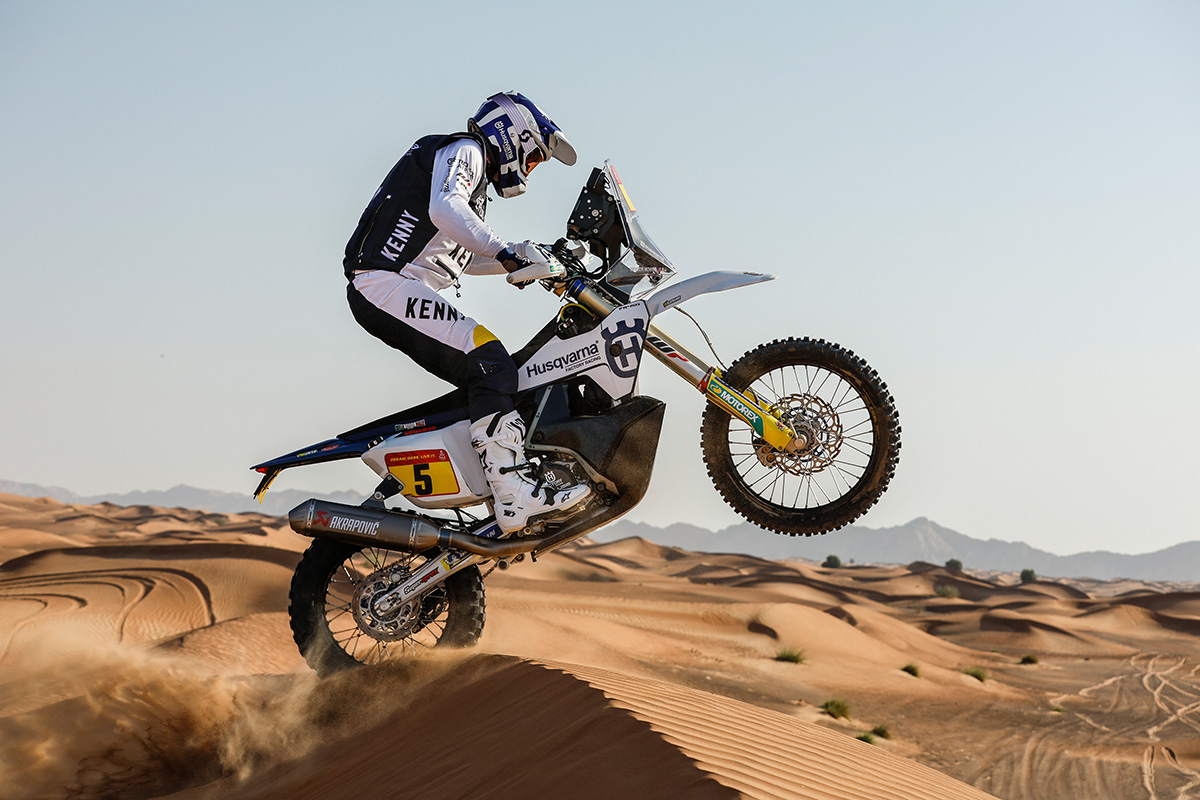 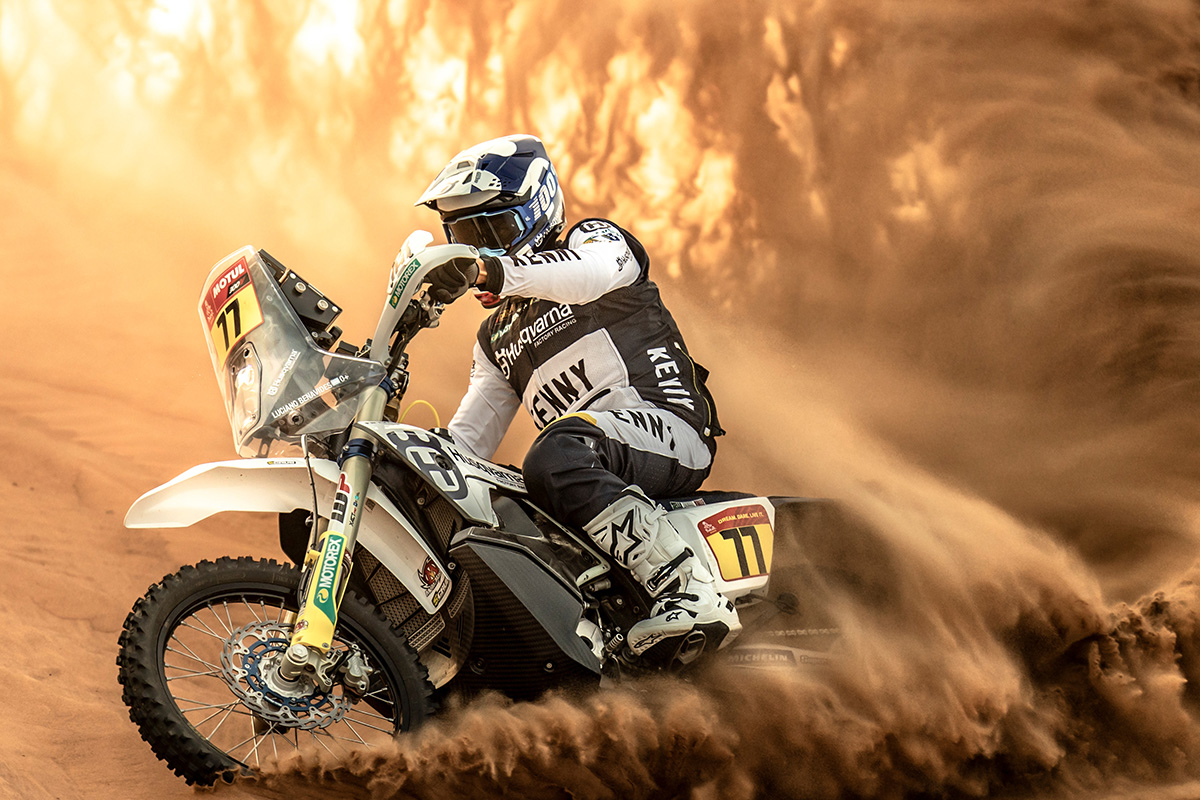 The Husqvarna Factory Racing team for Dakar 2022 was officially unveiled this week with Skyler Howes and Luciano Benavides primed and ready for the January 1 start date – new FR 450 Rally machines with a lot of development but where are the Rockstar Energy logos?

Getting a closer look at the bikes heading to the Dakar Rally is one of the pleasures leading up to the start date. Not all teams have released images and bike details (so far) but for those who like the metal as much as the drama of the racing, these are the FR 450 Rally Husqvarnas Skyler Howes and Luciano Benavides will race at Dakar.

2021 has seen a lot of testing by the Husqvarna riders, helping considerably towards the new bike as we understand it, and the machine you see here is the same as the KTM and GASGAS teams will run.

“The new bike we have been developing throughout the year has been another massive improvement for me.” Explains Howes who will contest his first Dakar as a factory rider in January. “In years past, I’ve just turned up at the Dakar and often ridden a bike for the first time at that event. Now, I’ve been given the chance to not only spend a lot more time on that bike, but also have a massive input into its development. That’s had the effect that I feel really at home on the new FR 450 Rally and I’m looking forward to taking it to Dakar.”

Benavides says similar although he, like many, had injuries to overcome during the early part of 2021. “The team have done an incredible job with many hours working and testing.” Says Luciano. “We spent a lot of time in the middle of the year developing the new bike and then when we rode it in Morocco it was definitely a big step forward for me. Not only did the bike perform really well, but it also helped me and my confidence.”

The 2022 Dakar looks set to be one of the hottest contested in recent years with rider changes between teams and a huge mixture of former winners and younger riders all as keen to take the result.

It’s not the biggest news story on planet earth right now but it is notable that Rockstar Energy logos no longer feature on the Husqvarna Factory Racing bikes or rider clothing.

The release of these official images for the 2022 Dakar puts concrete into the rumour we’d heard that Rockstar would not sponsor the factory race teams globally in 2022 – though the off-road, motocross and supercross squads in North America will still run under Rockstar colours.

These are the first Factory Racing Huskies (outside of the USA) to break cover in production bike colours and we kinda like it.

It is not clear if the lack of Rockstar support for the international Husqvarna race teams is just for 2022 or permanent, but it is rumoured to be the same across the enduro and motocross teams.