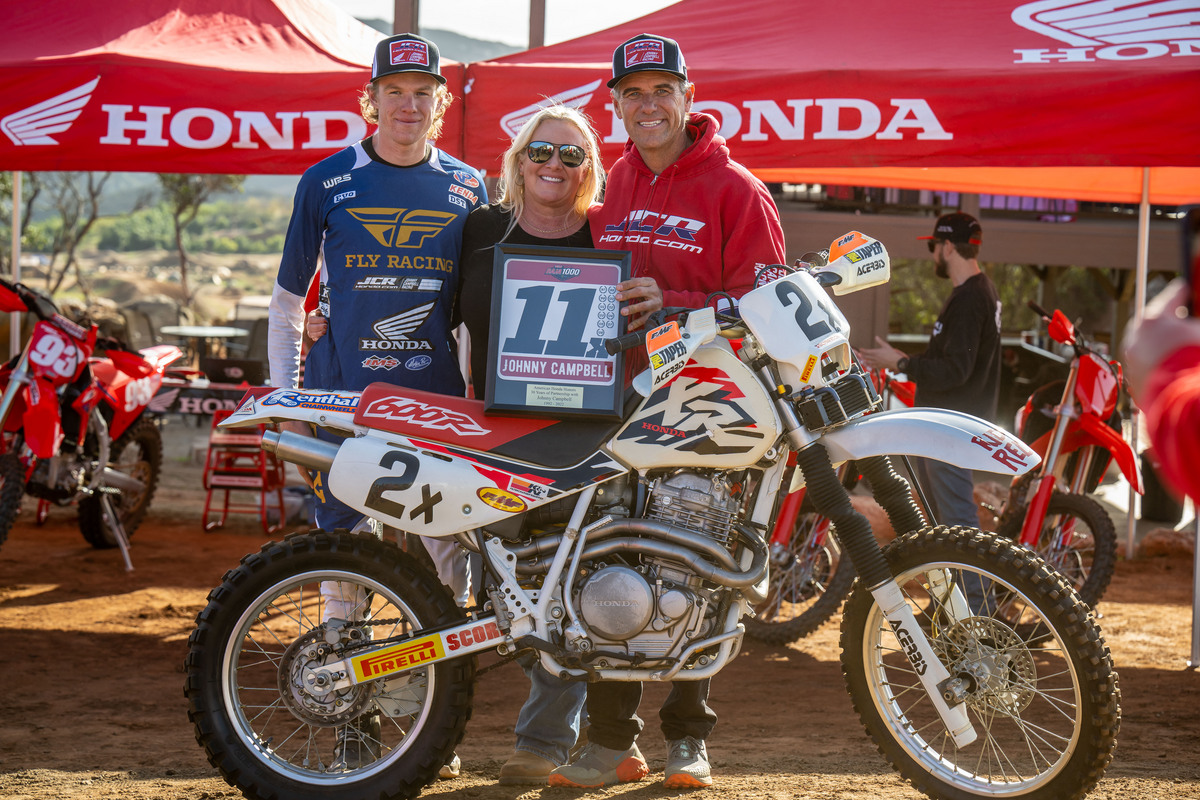 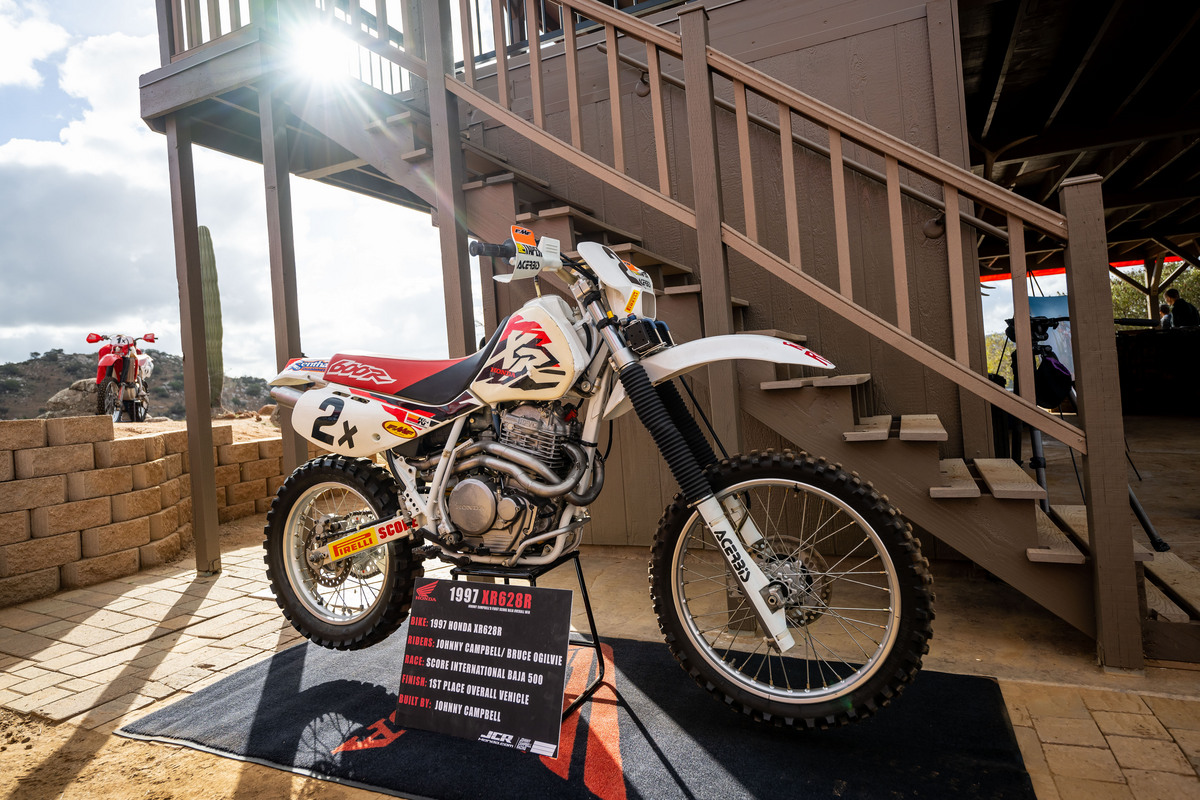 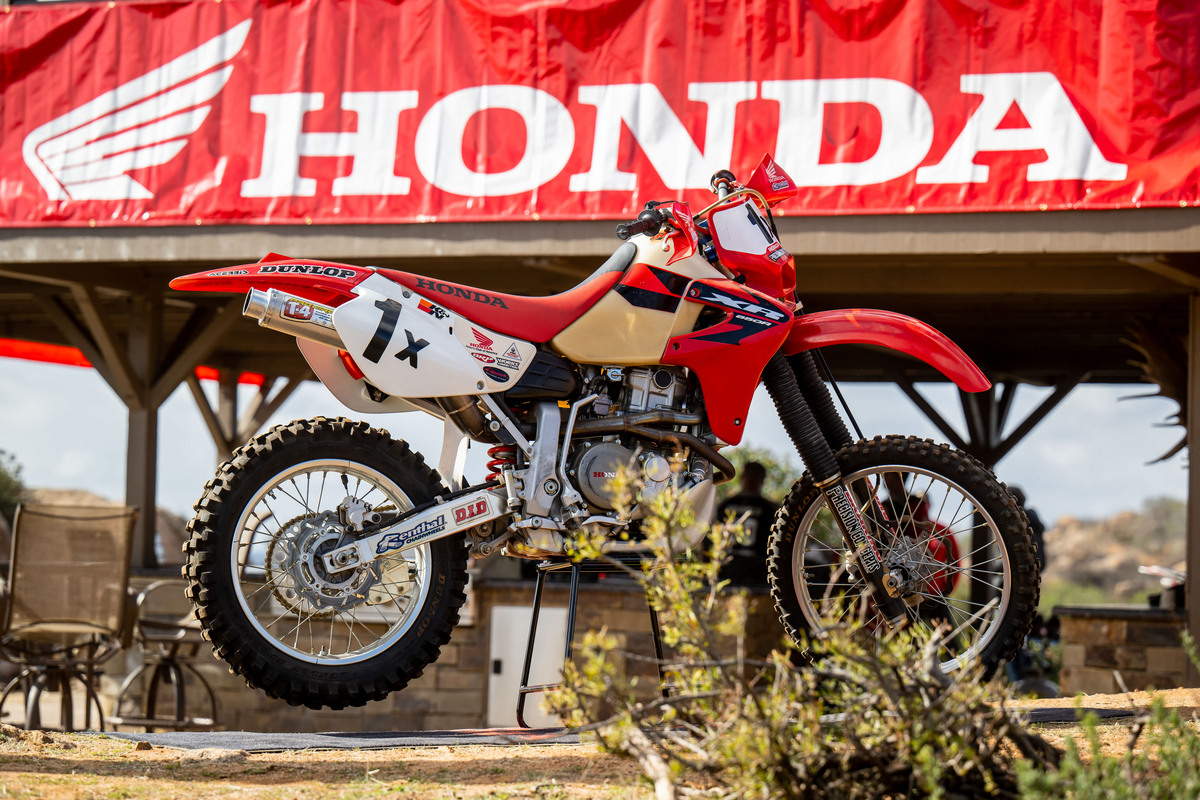 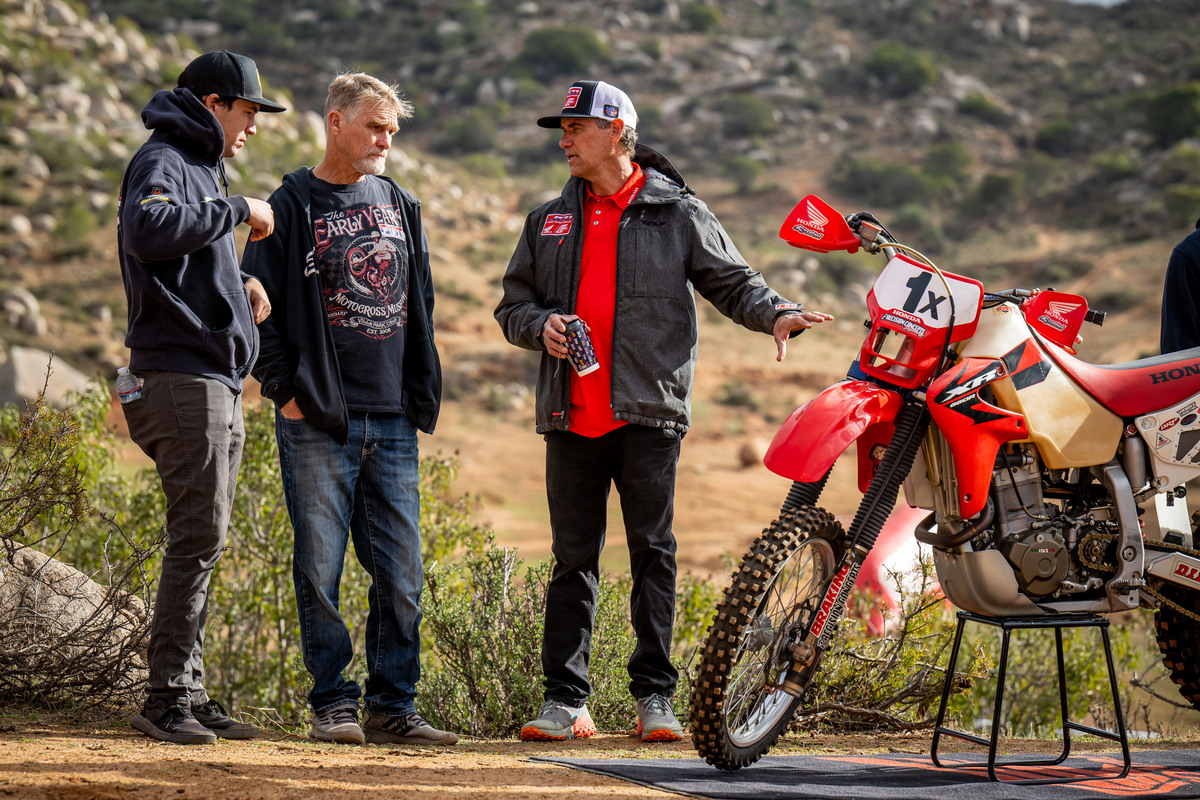 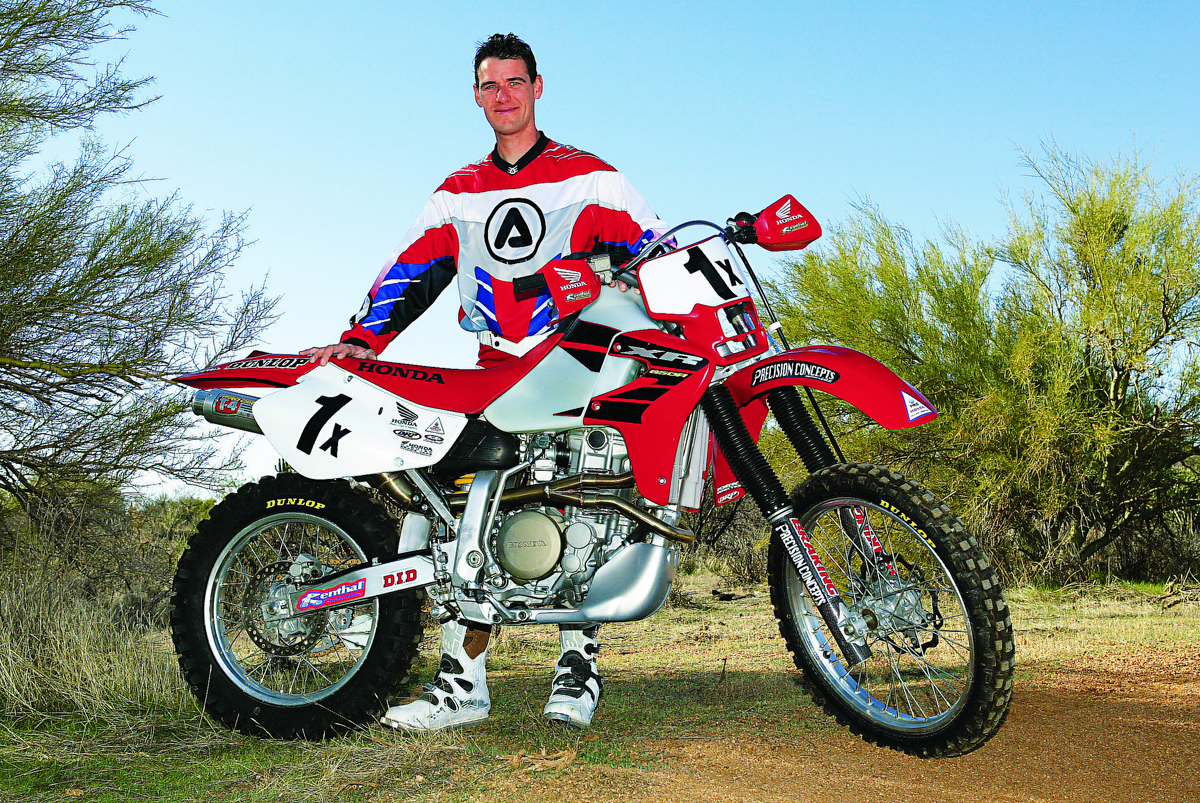 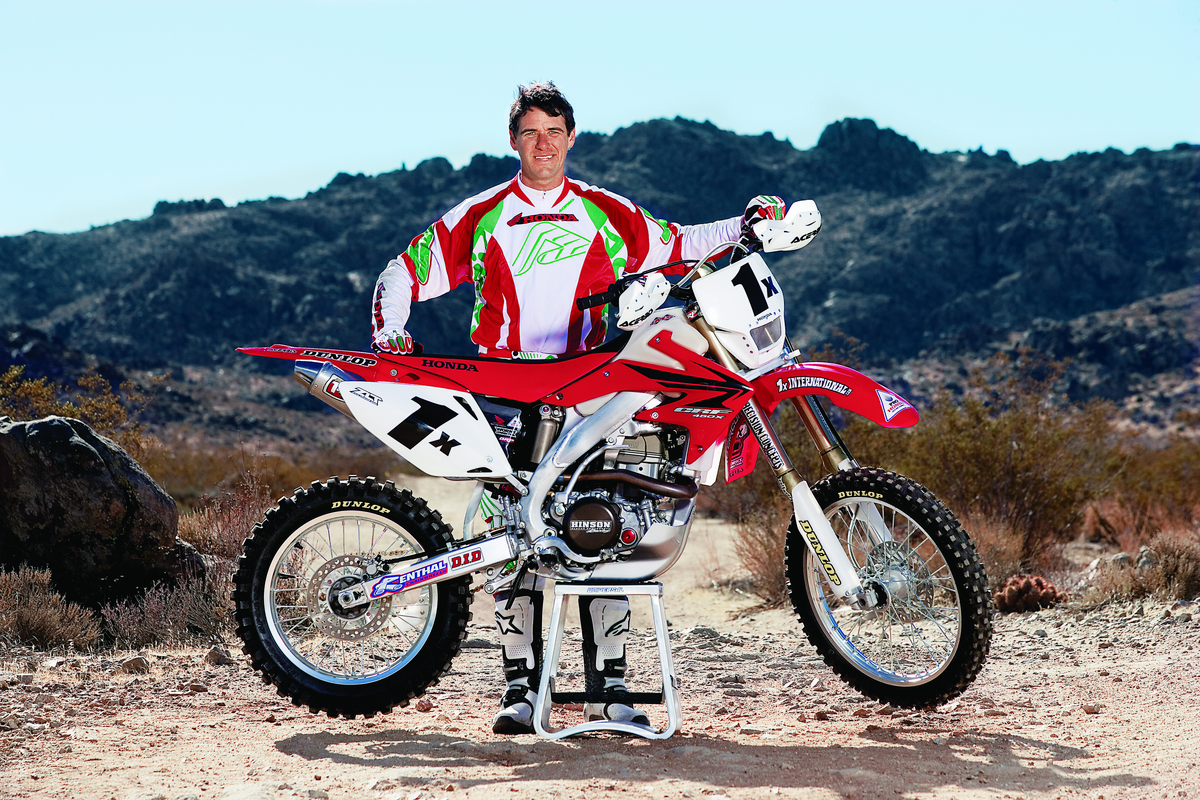 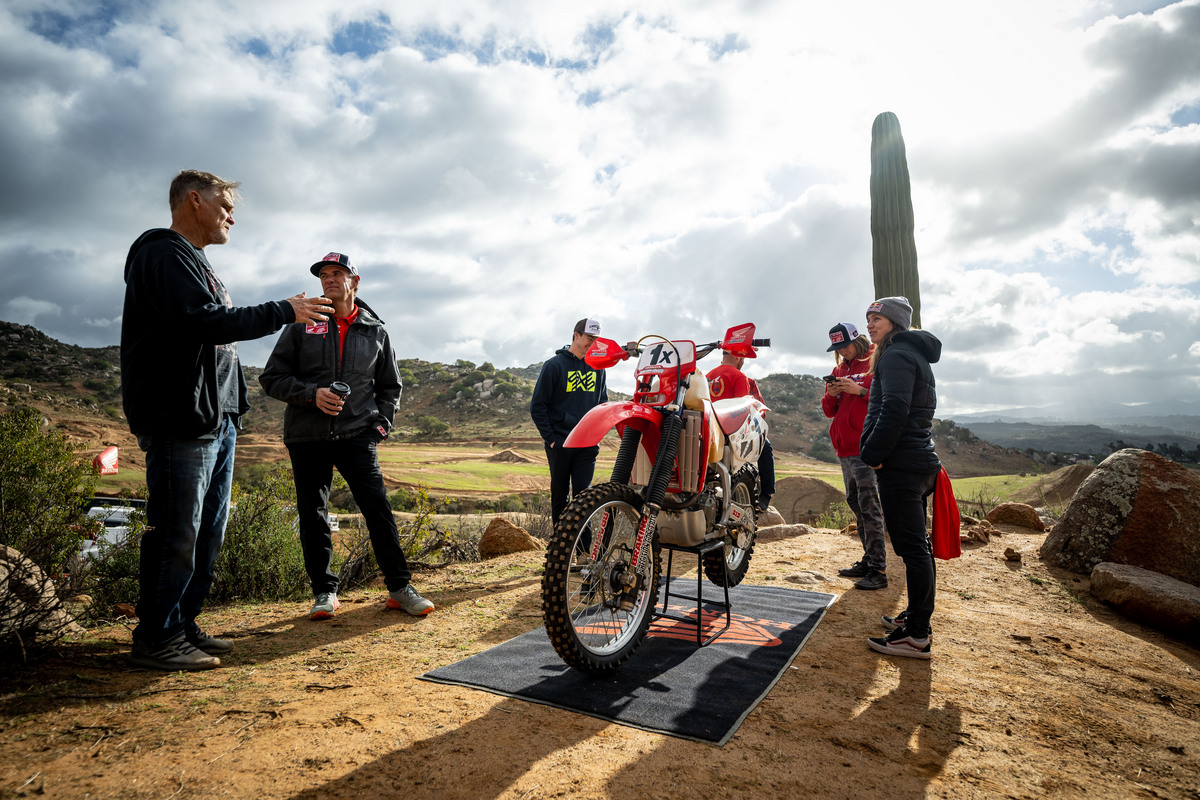 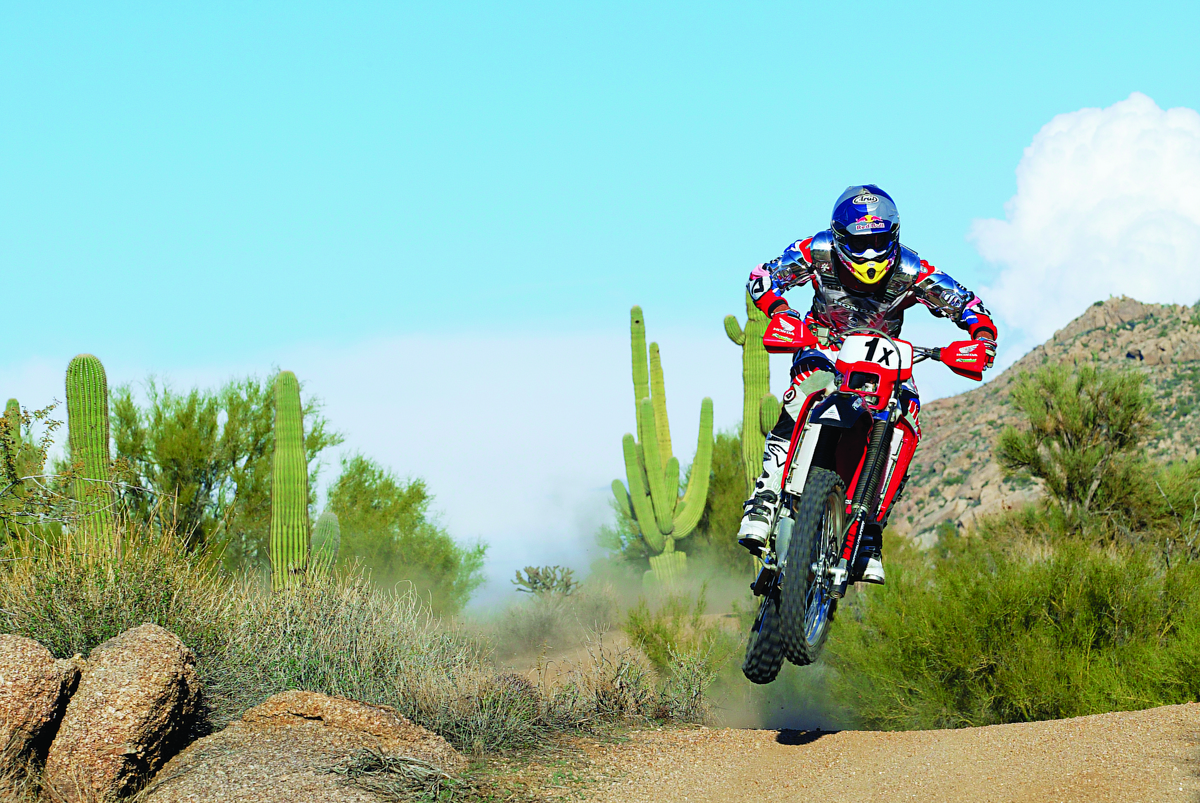 American Honda celebrate Johnny Campbell’s “30-years of hard work” and his historic 11 Baja 1000 victories by wheeling out some of the classic winning XR600R, XR650R and CRF450s for a feast of classic Pro Bike red candy.

Held at the Chocolate Mountain Ranch and celebrating 30 years working with Johnny Campbell, Honda USA put on a show of new and old XR and CRF models synonymous with desert racing and one of their most influential team members.

To show appreciation for three decades of hard work together, Campbell was presented with the 1997 XR600R that he rode to his first win in the SCORE International Off-Road Racing series. The ’97 XR was just part of the historic look back a glittering career which began when Campbell originally joined Honda in 1992 racing off-road the XR600R.

His first big win was the 1995 Nevada Rally, but he would become best known for his success racing in SCORE. He won the Baja 500 in 1997 as a teammate to Bruce Ogilvie (a Honda manager who would go on to become Campbell’s mentor), and then topped the Baja 1000 the same year, with teammates Tim Staab and Greg Bringle.

He went on to collect a record total of 11 wins in the Baja 1000, and five in the Baja 500. He also competed in the 2001 Dakar Rally, finishing eighth overall and first privateer. 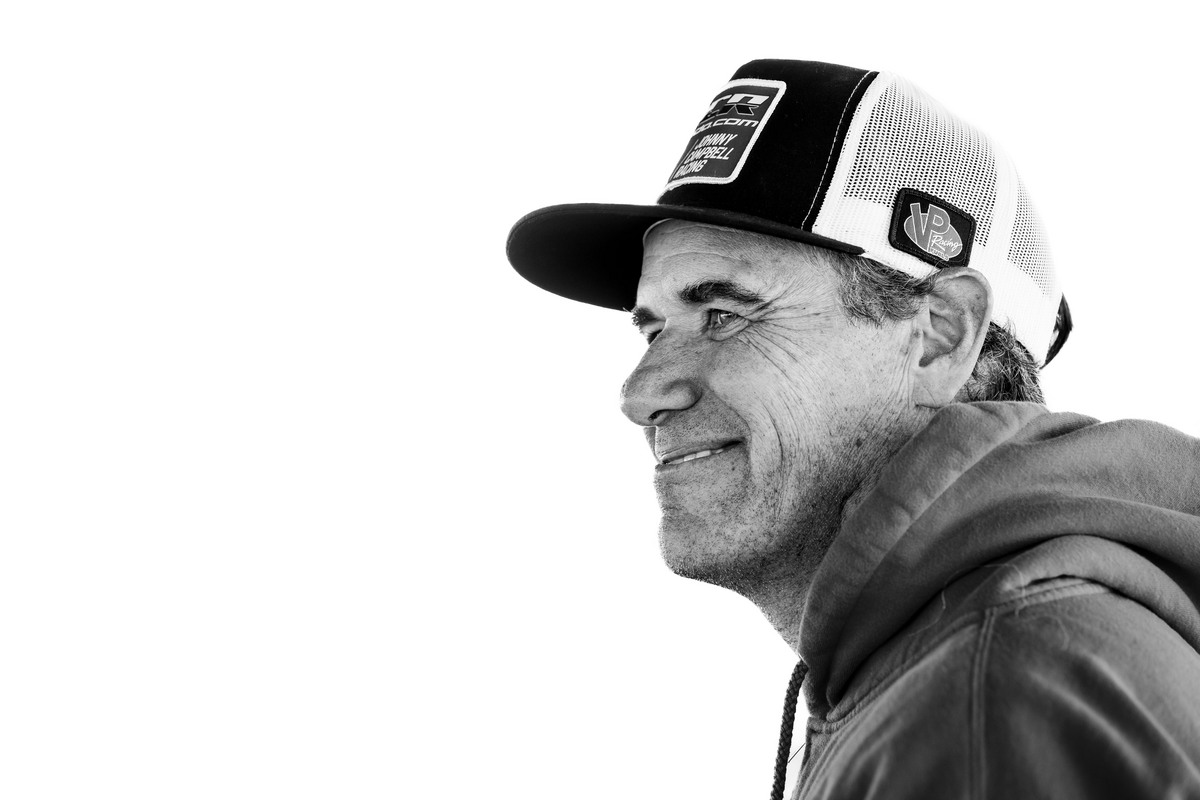 In addition to his racing, Campbell has supported Honda in a number of other ways. In 1994, he was brought in-house by Ogilvie to build Honda’s off-road race machines – initially based on the XR600R, eventually the XR650R and ultimately the CRF450X.

Along the way, Campbell assumed more responsibilities, including forming his own team (Johnny Campbell Racing) and taking over Honda’s SCORE effort in 2008, with the blessing of Ogilvie (who would pass away the following year). JCR transitioned from SCORE to the GNCC series in 2014 and continues to compete in the American Motorcyclist Association’s NGPC and NHHA series. Campbell also serves as Off-Road Coordinator for American Honda, working with the SLR Honda and Phoenix Racing Honda squads.

Campbell has also been heavily involved in research and development for Honda over the years, including production bikes such as those listed above, and factory machinery like the CRF450 RALLY, which Ricky Brabec and Kevin Benavides rode to Dakar Rally wins in 2020 and 2021, respectively.

“This whole event was incredible,” Campbell said. “I’m very thankful for my relationship with American Honda, and it means a lot to be recognised for three decades of hard work, racing, overcoming obstacles, giving input for new product, and helping with rider development.

“I cherish all the relationships I have with the folks at American Honda, and I’m really touched, honored and emotional. It’s been an amazing career so far, but this isn’t a retirement party; there’s still plenty of work to be done, and I look forward to this partnership continuing for a long time!”

“On behalf of American Honda, thank you to Johnny, for the invaluable support over the past 30 years,” said Brandon Wilson, Manager of Sports & Experiential at American Honda. “As a racer, Johnny is synonymous with Honda’s off-road success, and deservedly so. However, his contributions have extended far beyond that, to the point that his fingerprints are still all over the bikes our customers enjoy riding off-road today.”