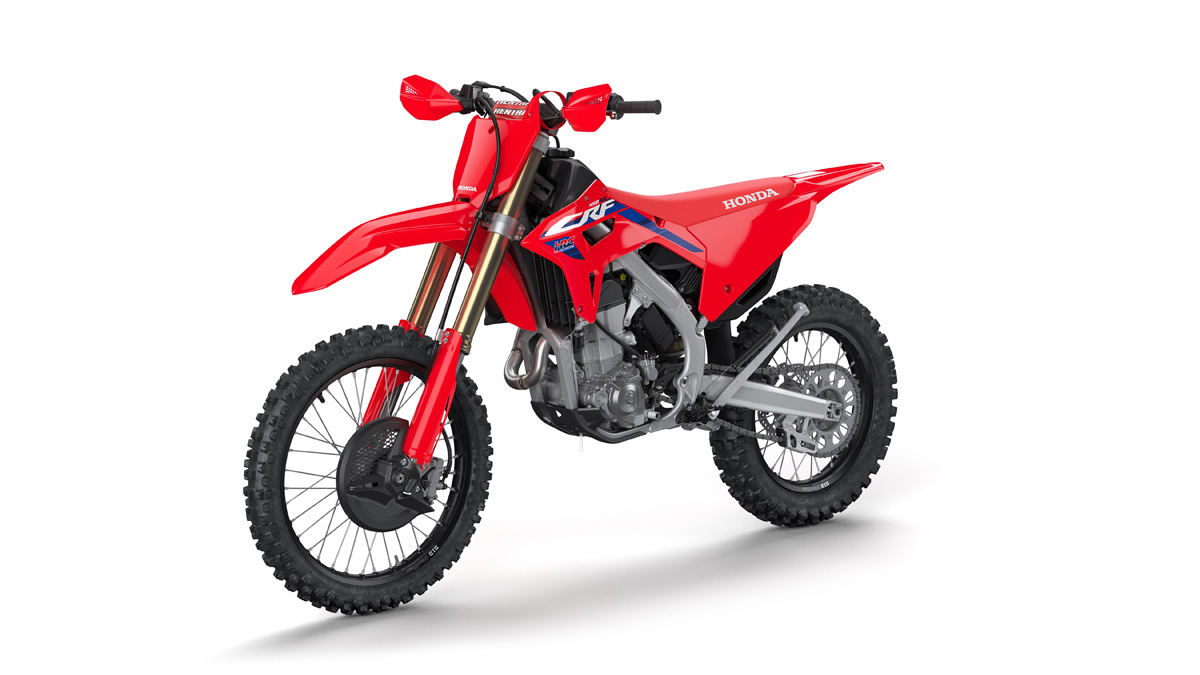 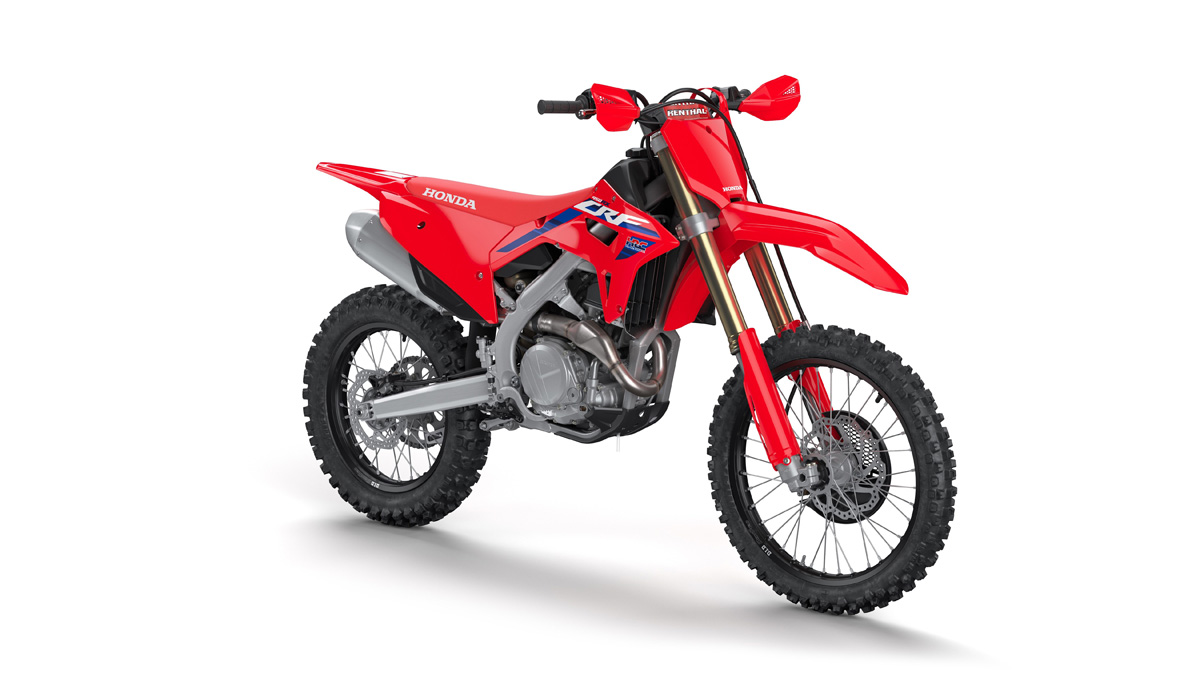 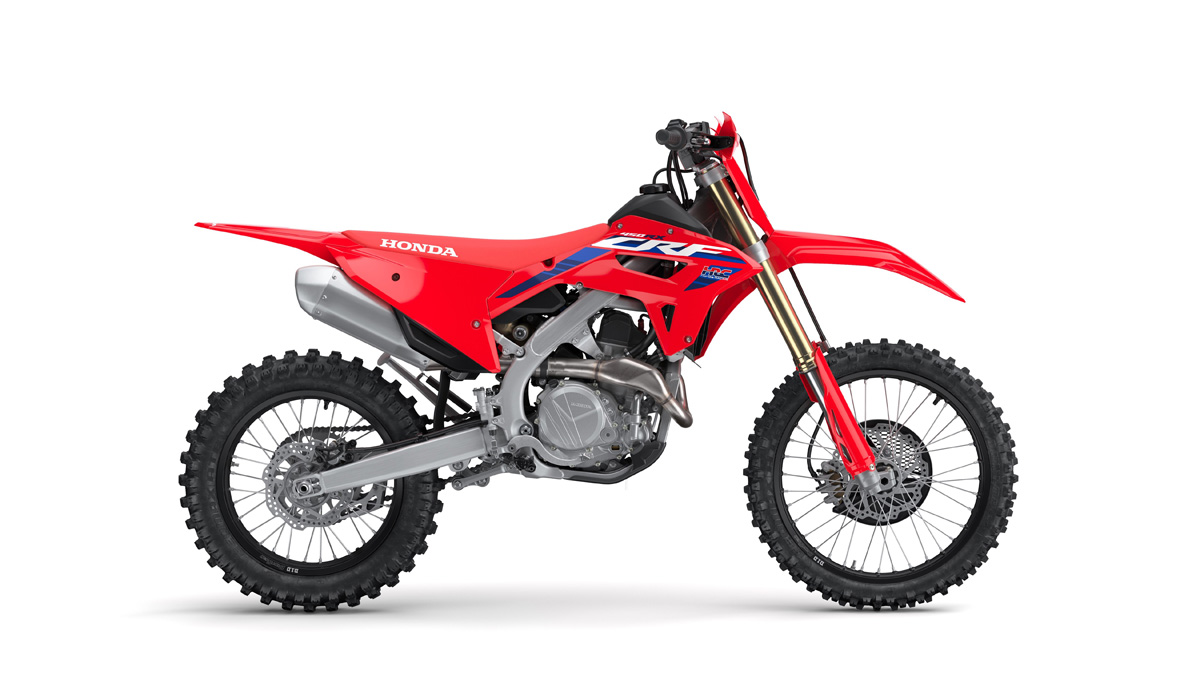 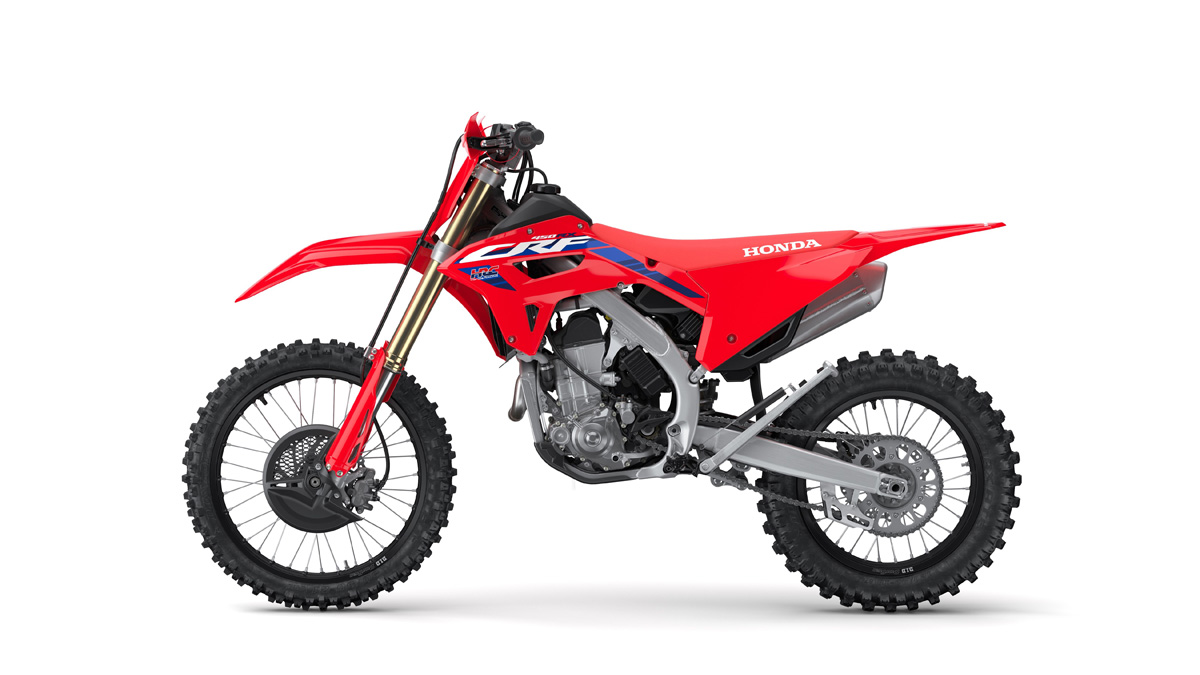 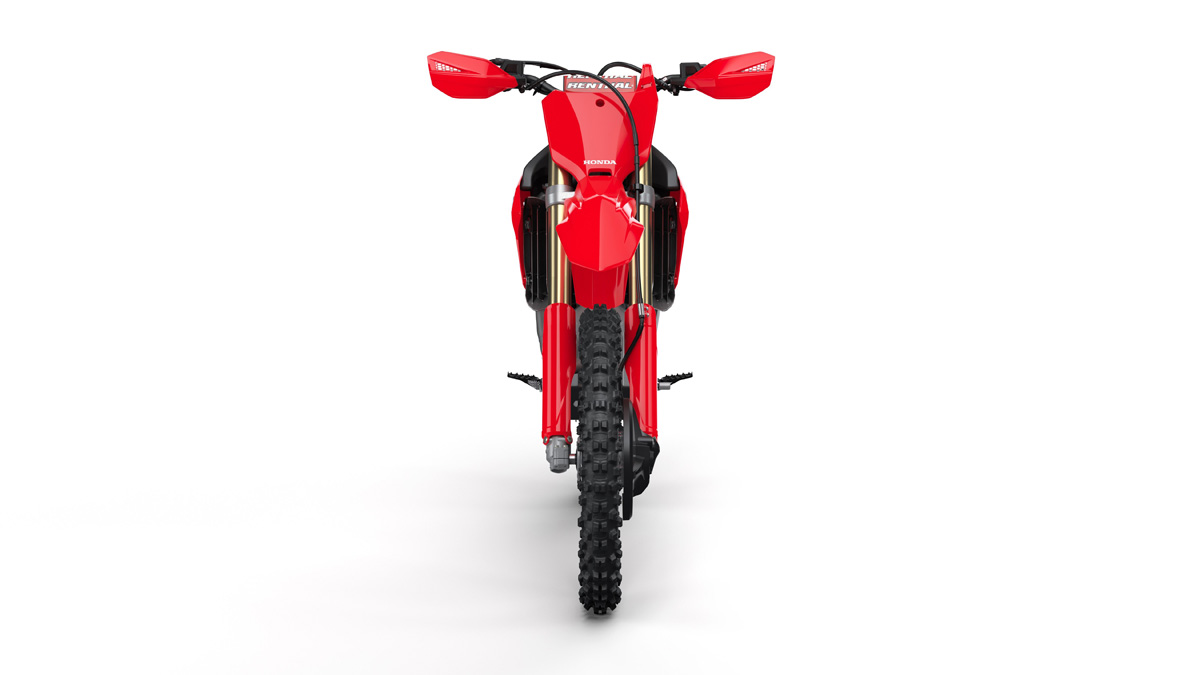 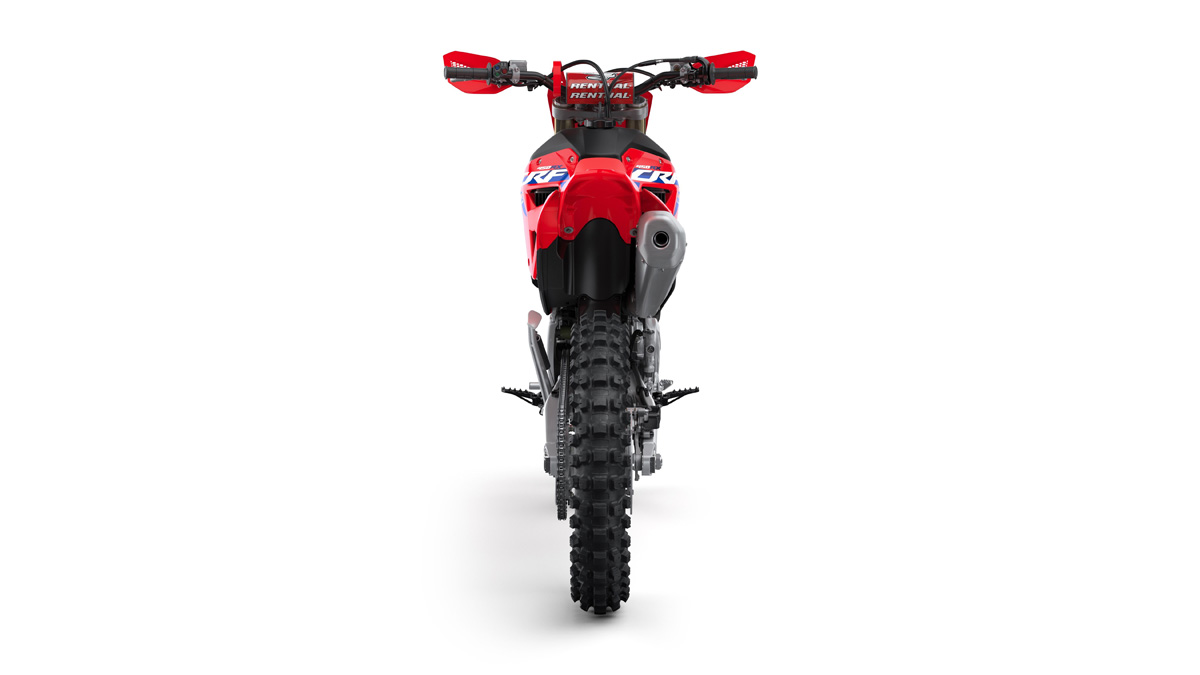 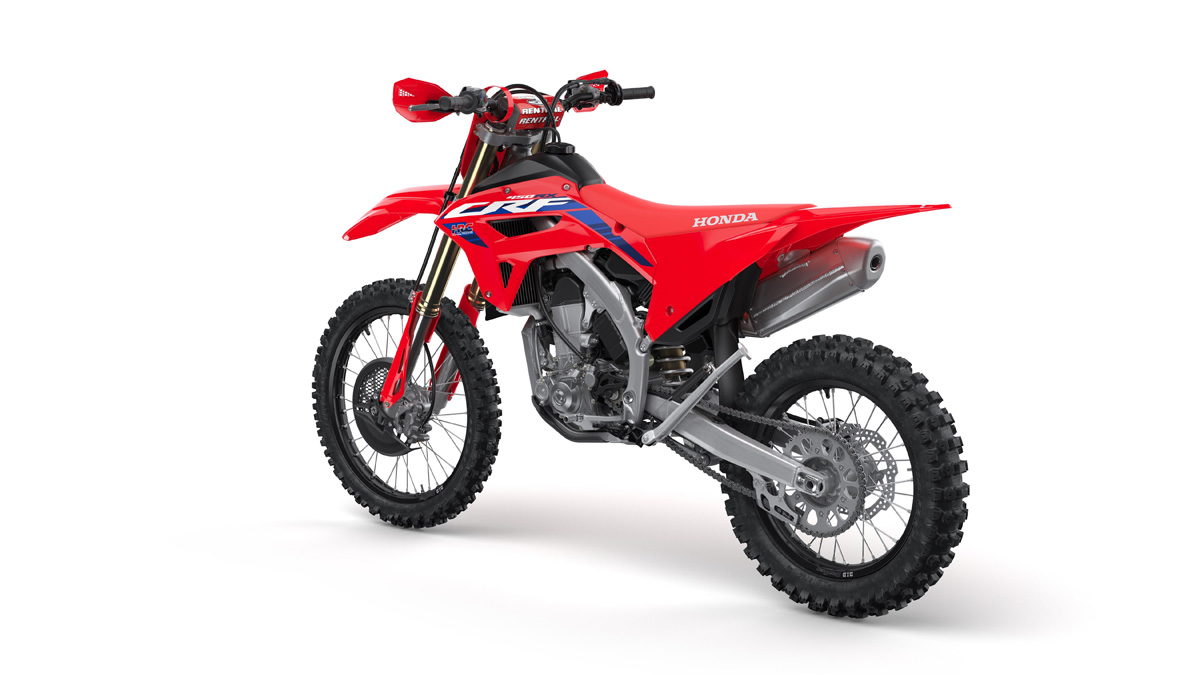 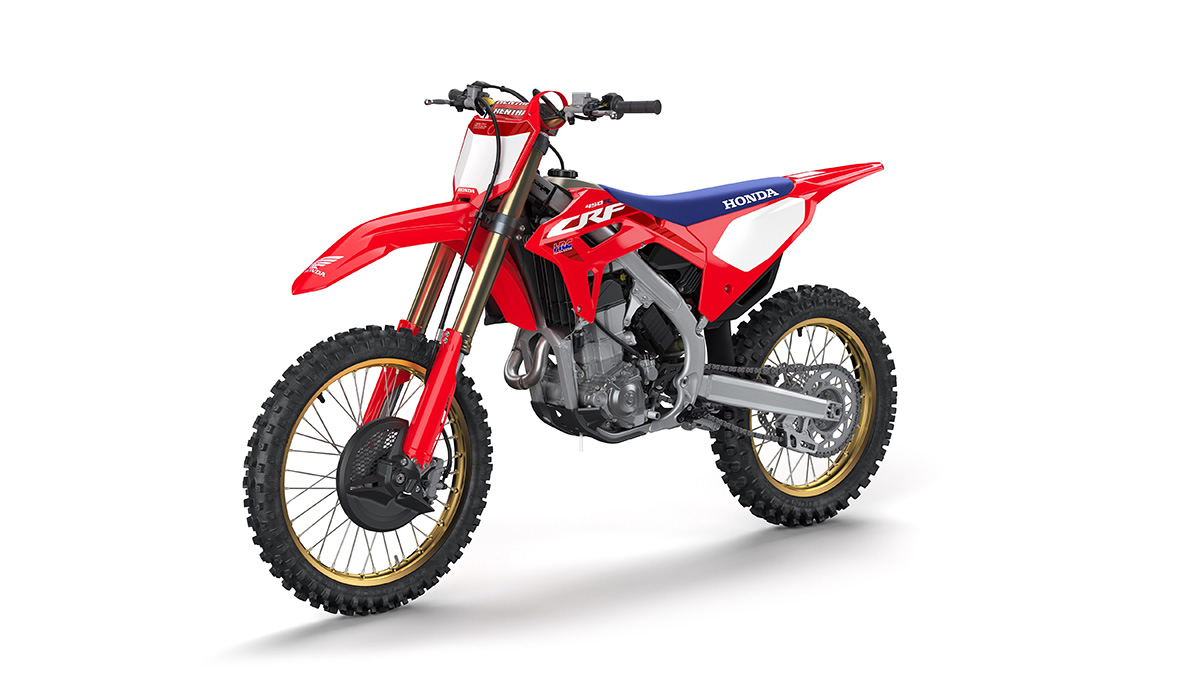 Honda has announced the 2023 CRF family model line-up including a 50th Anniversary edition motocross and with the CRF450R and CRF450RX headlining the new model range boasting more usable power, a stronger muffler and chassis upgrades.

HRC rider feedback from the FIM World MXGP, AMA Supercross and Pro Motocross championships has steered the direction of CRF450R development. As a result, the 23YM CRF450R and CRF450RX are easier to rider faster, for longer.

Two-year cycle of updates from Honda

Unlike many other manufacturers in recent years, Honda is following the two-yearly cycle of development with consistency. The ’23 CRF450R and RX models get updates underpinned as ever by factory rider feedback and which alos follow a familiar pattern of making going faster for longer, easier.

“Revised rigidity” for the frame increases in rear damping force without unwanted stiffness Honda say plus the new machine (compared to the 22YM) is more stable and turns faster with better suspension reaction and bump absorption.

Updates to the engine mean it now produces more low-rpm torque with smoother power delivery in part due to new intake ports, a longer air funnel, smaller diameter throttle body and revised cam timing as per factory race bikes. The rear muffler has also been made more durable plus all bikes feature new graphics. 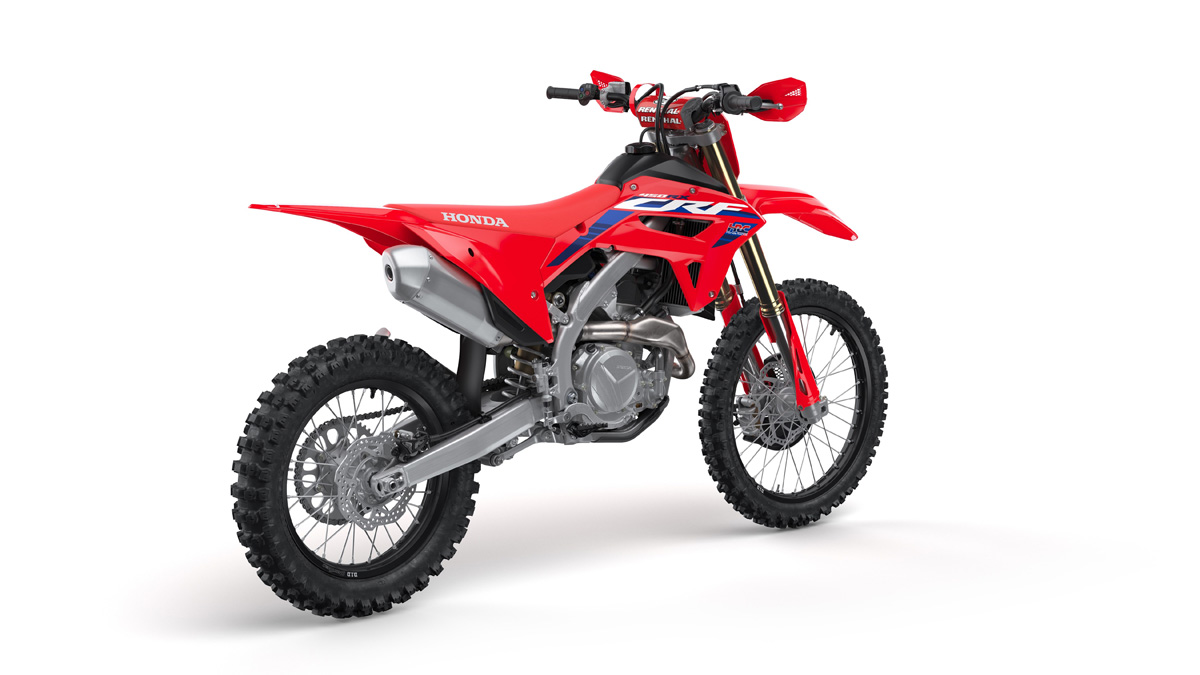 Honda say detail adjustments to frame rigidity along with revised suspension settings make the bike basically more efficient. Here’s what Honda have to say in detail:

It’s not simply an MX machine with a side stand…

Although it is clearly based upon the CRF450R, settings are specific to the CRF450RX to meet the different purpose. Given the wider variety of terrain and conditions the RX will cover compared to the MX machine, and to match the new frame ‘tune’, the suspension and chassis feature adjustments as you'd expect.

The rear shock features increased compression and rebound damping to improve feel and drive, especially in rutted conditions where it feels less stiff Honda says. There are 11 adjustment positions for rebound and six for high and low-speed compression in the rear suspension. Oil volume is 421cc. The aluminium swingarm is 585.2mm long and works the shock through Pro-Link.

The Showa 49mm USD coil spring fork is actually based on the ‘factory’ unit supplied to MX race teams in the Japanese championship. It employs a 310mm stroke with 396cc oil volume and 13 adjustment positions for rebound, 15 for compression; damping settings have been revised to increase rebound and slightly reduce compression.

Renthal Fatbars are standard fitment on the CRF RX machines and the top yoke features two handlebar position options for moving the handlebar rearward and forward by 26mm. When the holder is turned 180°, the handlebar can be moved an additional 10mm from the base position, resulting in four unique riding positions. 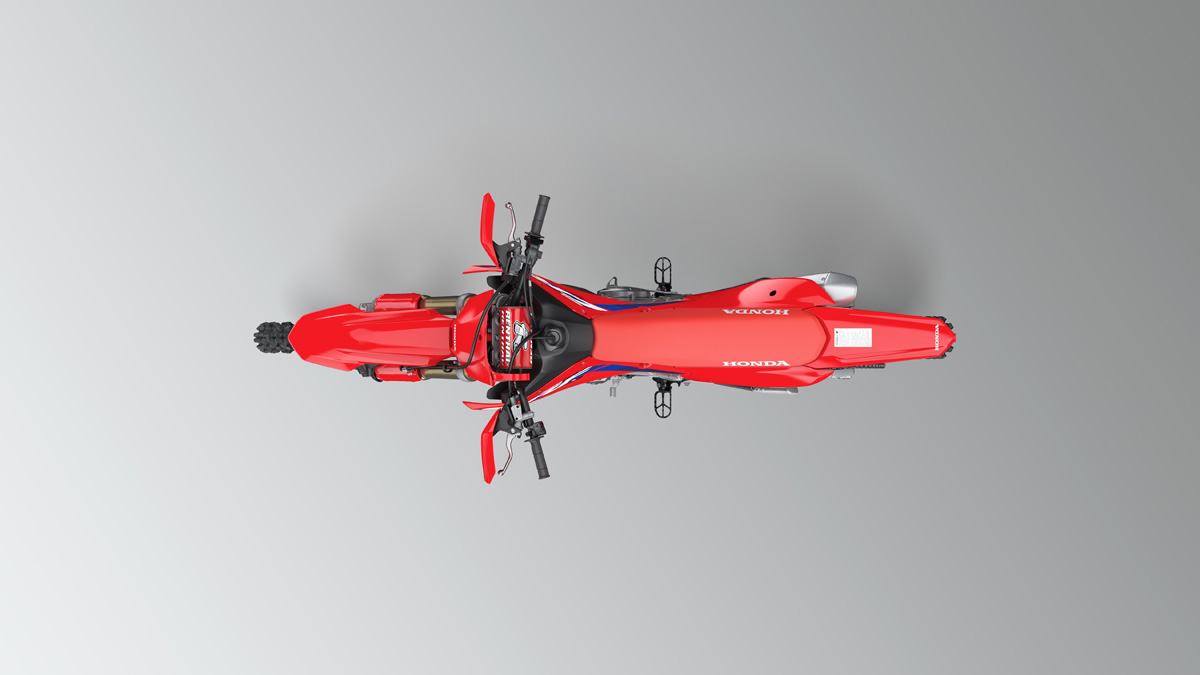 Roost guards are standard also as is the forged aluminium sidestand and 18-inch rear wheel of course. DID aluminium rims house Dunlop’s enduro-ready AT81 Geomax 90/90-21 front and 120/90-18 rear.

A much heavier low-range punch is the “development direction” of the 23YM 449.7cc four-valve Unicam CRF engine, to make getting off a corner much quicker and easier they say. Maximum torque remains as before, but at 5,000rpm there’s an extra 10.7% to make use of higher gears, reducing fatigue. The engine also starts making more power in the lower rpm range, with a 5% reduction at absolute peak. 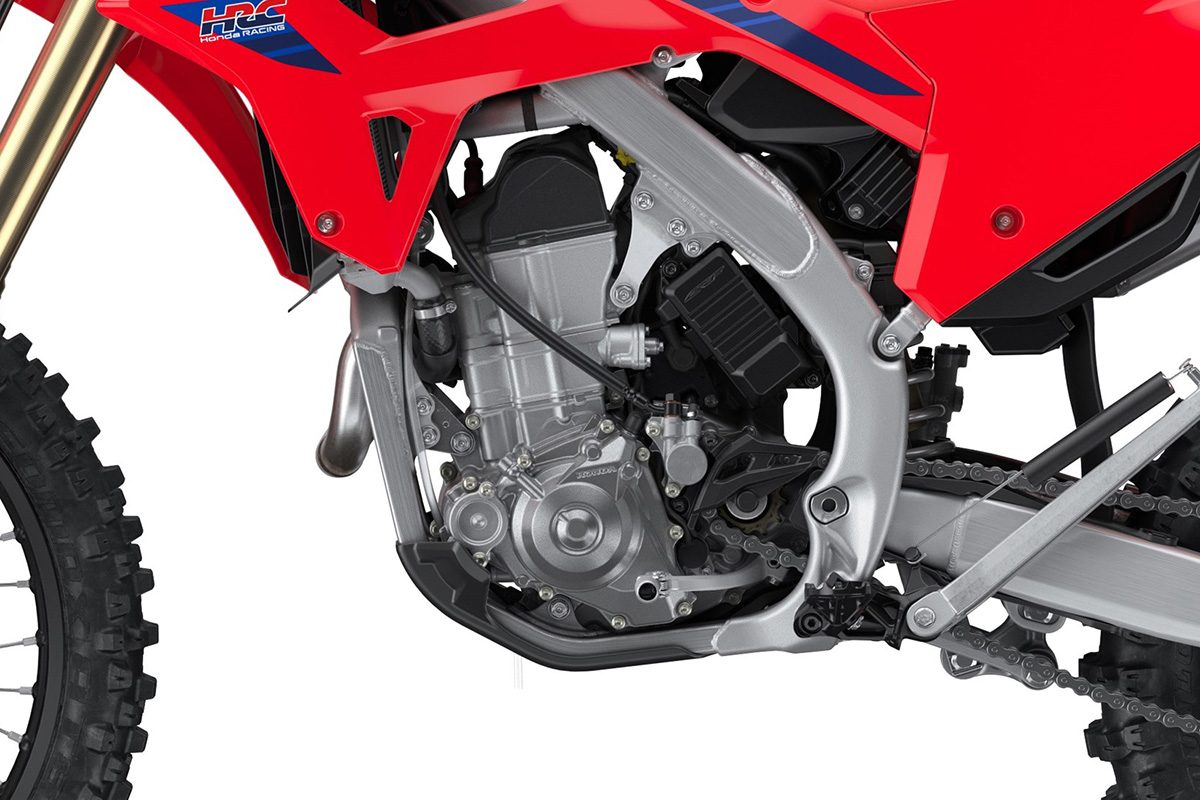 To generate the stronger bottom-end torque the air funnel (a part directly from the CRF450RW HRC race machine) is longer, and intake port shape narrower, increasing gas flow. Likewise another HRC-developed part now is a 44mm diameter throttle body (2mm smaller) smoothing power delivery low-down. New valve springs and valve timing are direct result of feedback from HRC’s factory riders and the spec. they themselves use.

The new exhaust muffler is constructed from heat-treated aluminium to better withstand contact from the rider’s boot Honda say. Testing to prove its ability to resist distortion took place with impact from a 2.2kg weight travelling from 600mm away. 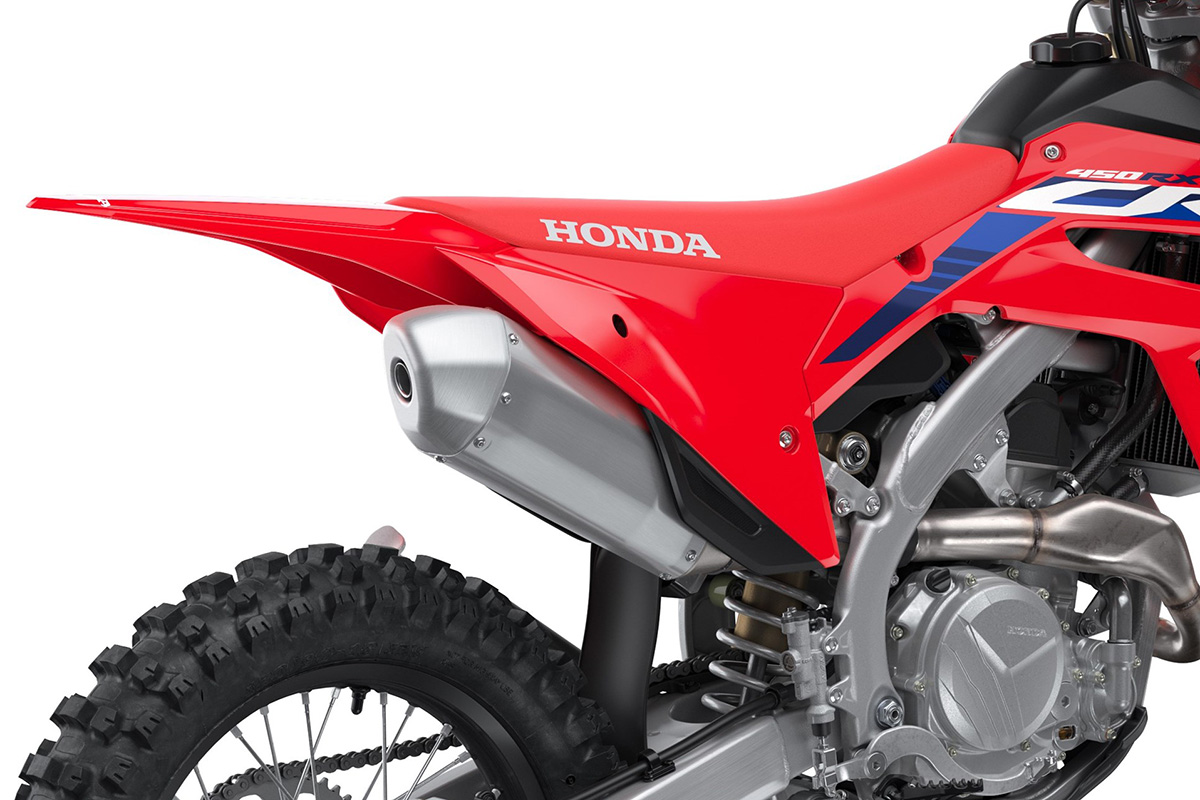 After five strikes they say there was very little deformation compared to the 22YM design. Importantly, the material itself (and heat treatment) ensure zero weight gain.

Bore and stroke is the same at 96 x 62.1mm with compression ratio of 13.5:1. A gear position sensor allows the use of three specific ignition maps for 1st and 2nd, 3rd and 4th, and 5th. An 8-plate hydraulic clutch gives outstanding control and feel at the lever as well as delivering consistent lever clearance under arduous riding conditions. It also reduces slippage at peak output.

Up front, the twin-piston Nissin brake caliper employs 30 and 27mm diameter pistons biting a 260mm wave-pattern disc; along with low-expansion rate brake hose it gives both a strong feel and consistent staying power. The single-piston rear caliper runs on a 240mm wave-pattern disc.

Designed with Computational Flow Dynamics (CFD) the bodywark requirtes just eaight bolts to remove it completely, is designed for maximum through-flow of air, has a one-piece radiator shrouds, and an eight litre (2.1 US Gal) plastic fuel tank.

For 23YM, the CRF450RX features an all-new graphic treatment which includes the new redesigned iconic HRC logos which have been introduced as HRC’s activities.

The long and the short of it is the ’23 250 models in the CRF range have not changed. That’s simply because they saw big changes aimed at make going fast easier and reducing rider fatigue last season. 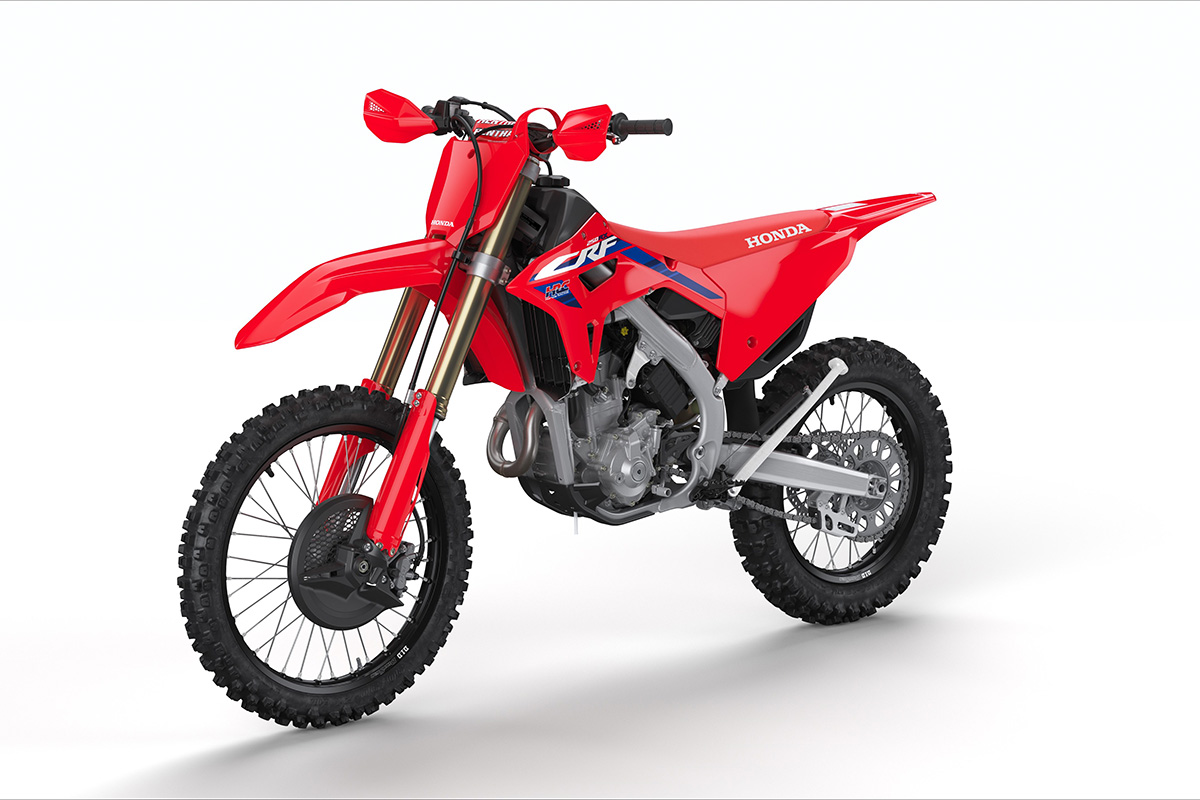 Engine performance saw an extensive revision to both intake and exhaust efficiency to improve low-rpm drive. High-rpm cam timing accuracy was also a focus alongside long-term reliability, plus a nine-plate clutch and a stronger gearbox with new ratios.

More information including availability and prices in your country: