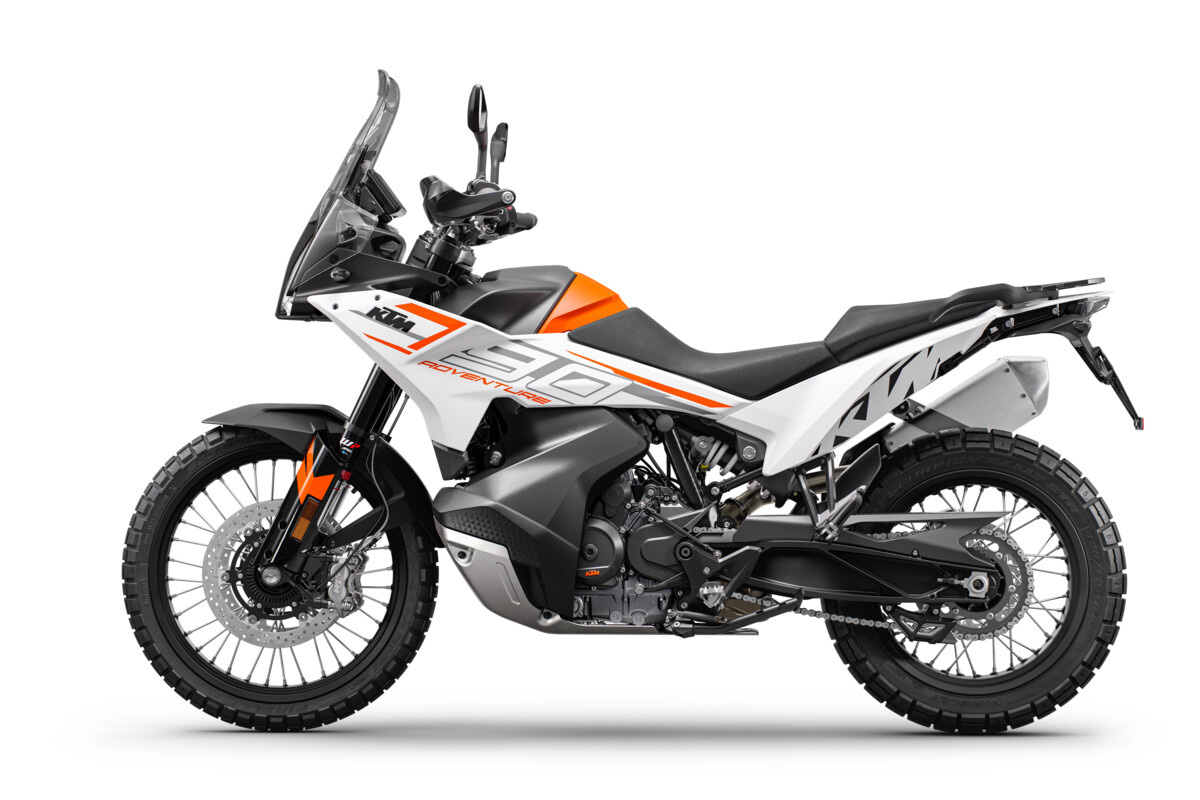 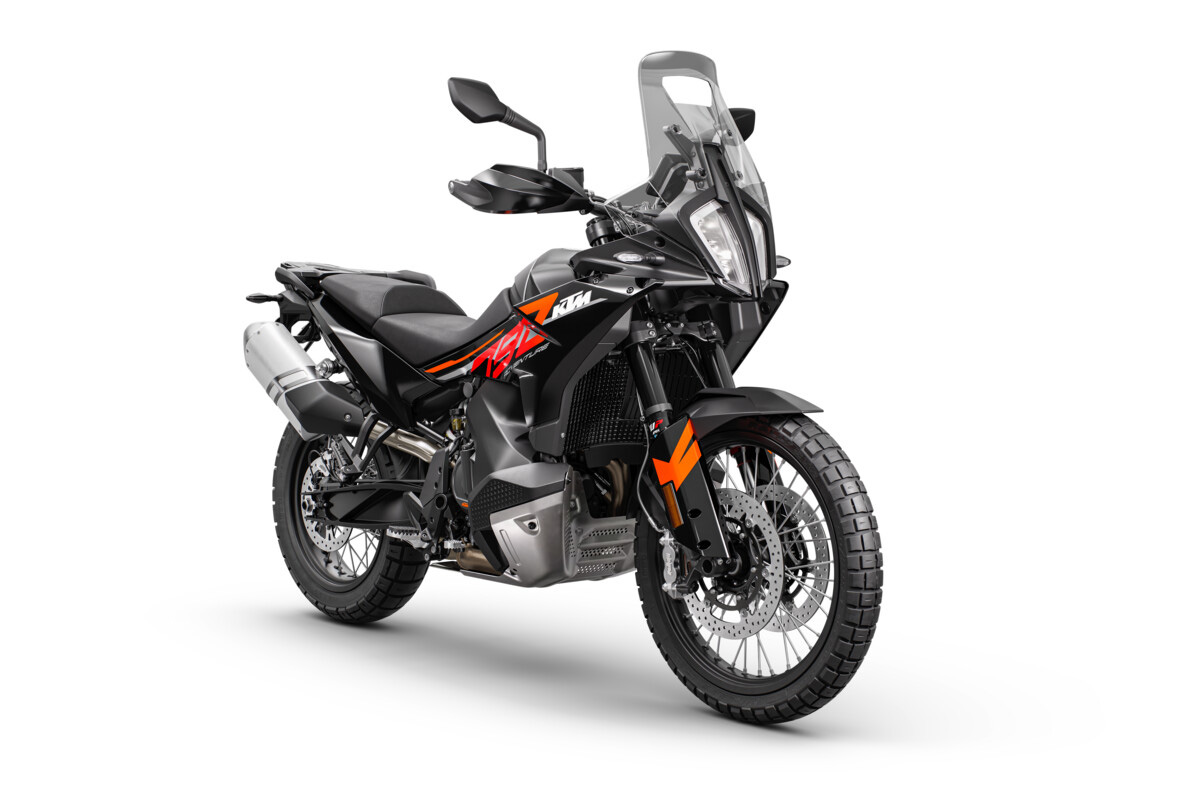 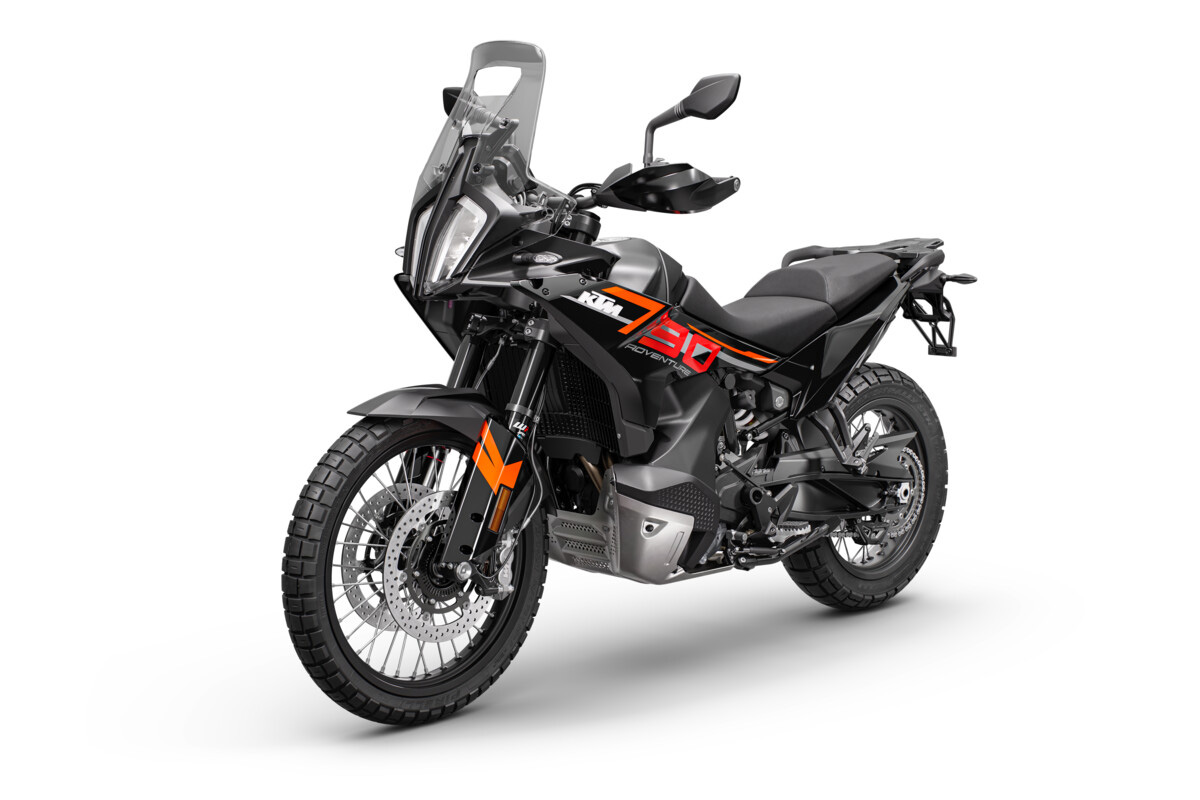 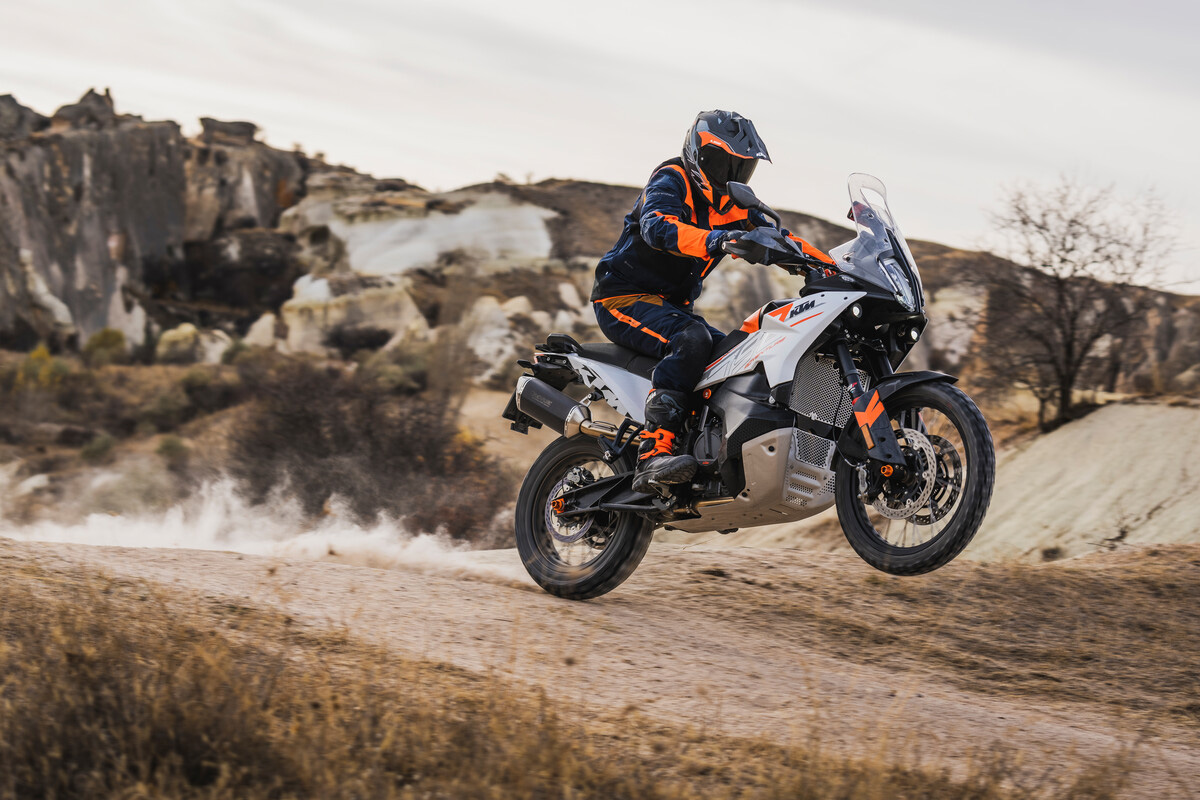 KTM has announced a “re-designed and redrafted” 790 Adventure with production carried out by their Chinese partner, CFMOTO.

It’s an unusual move from KTM to revive a model which they have already superseded (with the 890 Adventure line-up) but the bigger news is this first major wholesale shipping of the model production to China.

The redesign is straight out of Mattighofen and they say, pretty high up the press information to make the point, that the process will be supervised by KTM staff on the ground in China. Transcontinental cooperation is not new for KTM and the main thrust of this new venture with CFMOTO is to feed motorcycles “directly into the furthest corners of the globe” they say.

There is no word on pricing of this model, you would hope it will arrive with a lower price tag having already been designed and tooled, and of course built in China.

The original 790 Adventure was a great bike of course, helping forge the then new trend for middleweight Adv bikes. For the 790’s comeback KTM say they wanted even more ‘rideability’ from the LC8c motor that pumps out 95hp at 8,000 rpm and 88Nm at 6,500 rpm but also tweaks that would meet the criteria for Euro 5 emissions targets – even if that claim or aim to reach “further corners of the globe” with this model makes EU emissions regs seem like a side issue.

The 2023 KTM 790 ADVENTURE is now more stable at constant speed and has gained more cornering poise thanks to a 20% increase of rotating mass; an alteration that hasn’t compromised the highly rated agility of the motorcycle.

Reworked throttle bodies bring a cleaner and more efficient connection due to the enhanced combustion, and the ‘knock control’ sensor affords a higher state of ignition and better capacity for low octane fuel; a reassuring characteristic for the different qualities of gasoline found while travelling. A reconfigured optional Quickshifter+ enables faster shifting; all of which can be heard through the very latest exhaust system with 2023 catalytic converter and pre-muffler.

This is one of the largest modifications to ensure this vibrant generation of the KTM 790 ADVENTURE will be an impeccable choice for moving in, around and then outside of the city limits. The 15,000 km service intervals remain in concrete. 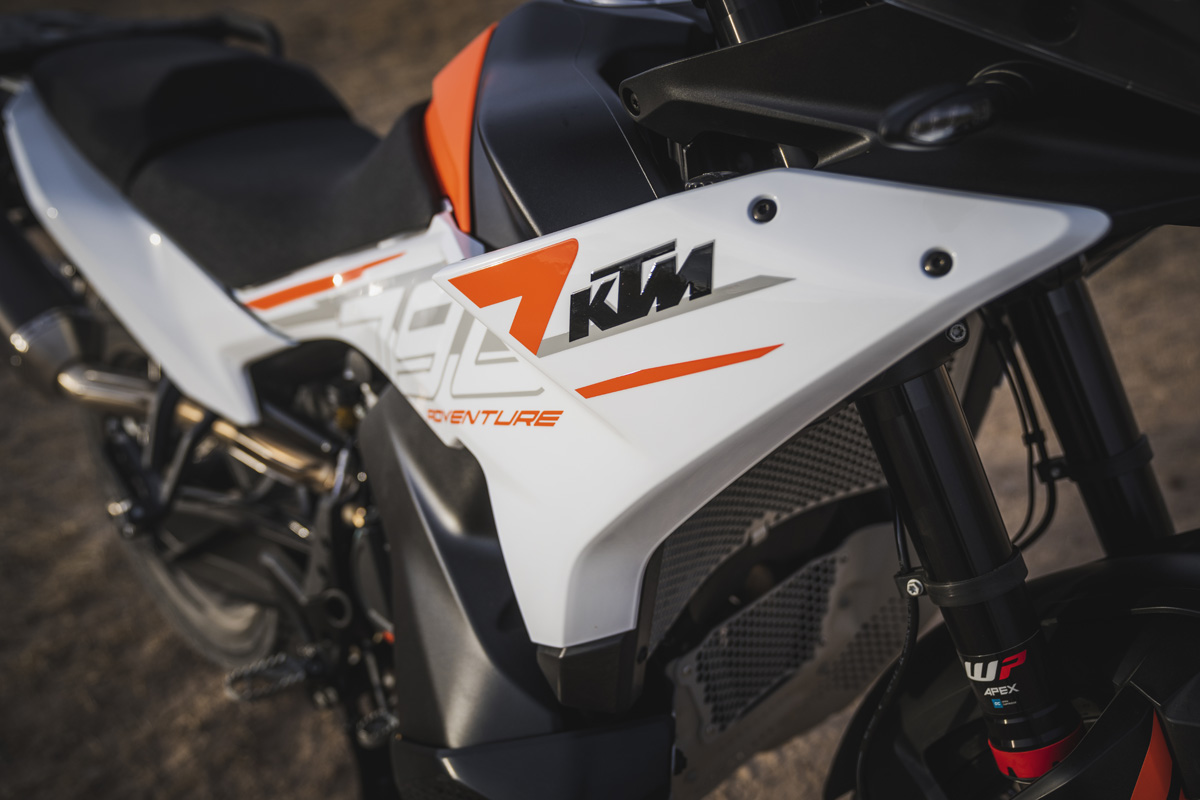 The dependability of the KTM 790 ADVENTURE is hiked with the reworked Power Assist Slipper Clutch with new friction plates and the engine breathes freer with a new airbox.

The bike also benefits from the latest 6D sensor, otherwise known as the Inertia Management Unit, that can be found on larger KTM siblings like the KTM 890 ADVENTURE and KTM 1290 SUPER ADVENTURE models. This sophisticated device informs the Cornering Motorcycle Traction Control and other aspects such as ABS, Motor Slip Regulation and the administration of Ride Modes. In terms of features the KTM 790 ADVENTURE holds very similar billing to its larger sibling: the KTM 890 ADVENTURE.

ABS programs now automatically switch between the Ride Modes, removing the need for more configuration. KTM has installed an innovative ‘DEMO’ function on the 2023 KTM 790 ADVENTURE; owners can trial the full slew of optional riding extras for the first 1,500 km before deciding which settings they’d like to purchase and keep. 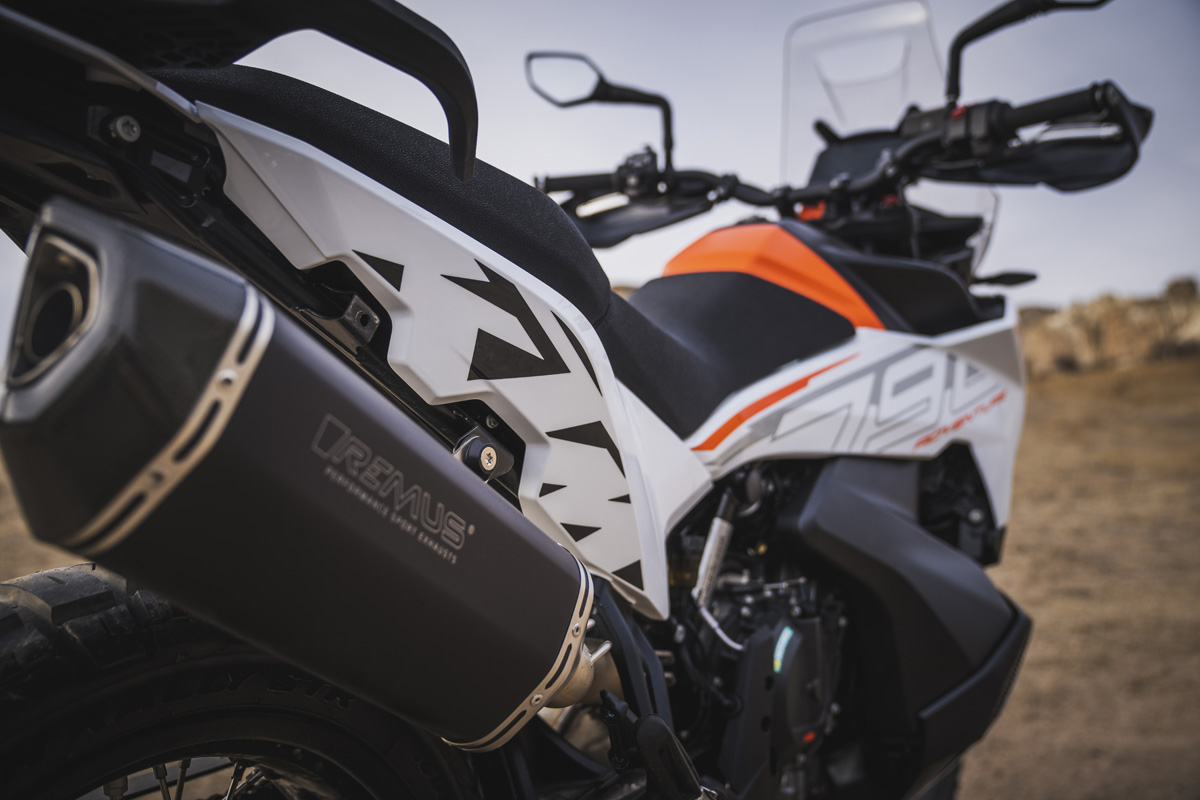 Refined feeling comes from the ‘23 spec 43 mm WP APEX Suspension fork at 200 mm travel with the same allotment for the shock, which has preload adjustability. The construction of the CroMo frame, in which the engine is used as a stressed member, guarantees a robust and stiff constitution for pillion and load-carrying as well as clever positioning of the rear shock for a low seat height (840 mm).

A 20-liter tank and potential 450 km fuel economy broadens the horizons of even the hardest adventure rider. For all the time spent in the comfy 2-piece saddle (which can be swapped and augmented through KTM’s PowerParts assortment for single or heated units) the 2023 KTM 790 ADVENTURE provides even more concessions to the eager traveler.

The tank follows the flow and lines of the bike where a new front mask gives way to an integrated fairing. The section still permits prime contact and the sensation of centralization that the rider can enjoy but is tougher and bolstered for the addition of mounts and other GPS devices if necessary. A new larger, higher screen provides more wind protection.

The lights are full LED sets and the dashboard view is brighter and better with the 5” TFT reacting to ambient lighting and utilizing a redesigned menu system of new infographics for faster and easier customization. Syncing the KTMConnect App will now lead to even more beneficial navigational and travel options, such as profiling the ‘top ten’ calls and contacts and adjusting the parameters of turn-by-turn guidance on the go.

As with the forerunner to the 2023 edition, the KTM PowerParts range is plush with KTM 790 ADVENTURE components for protection or aesthetic add-ons. Owners won’t have to consider extra defense against hits and dents to the front of the bike however thanks to the light aluminum engine protector, fitted as standard. The plastics (injected molded with graphics for more resistance) have also been reshaped to guard the tank and seat against unwanted knocks.

The 2023 KTM 790 ADVENTURE comes into two dynamic and catching colourways to mark the ‘second coming’.