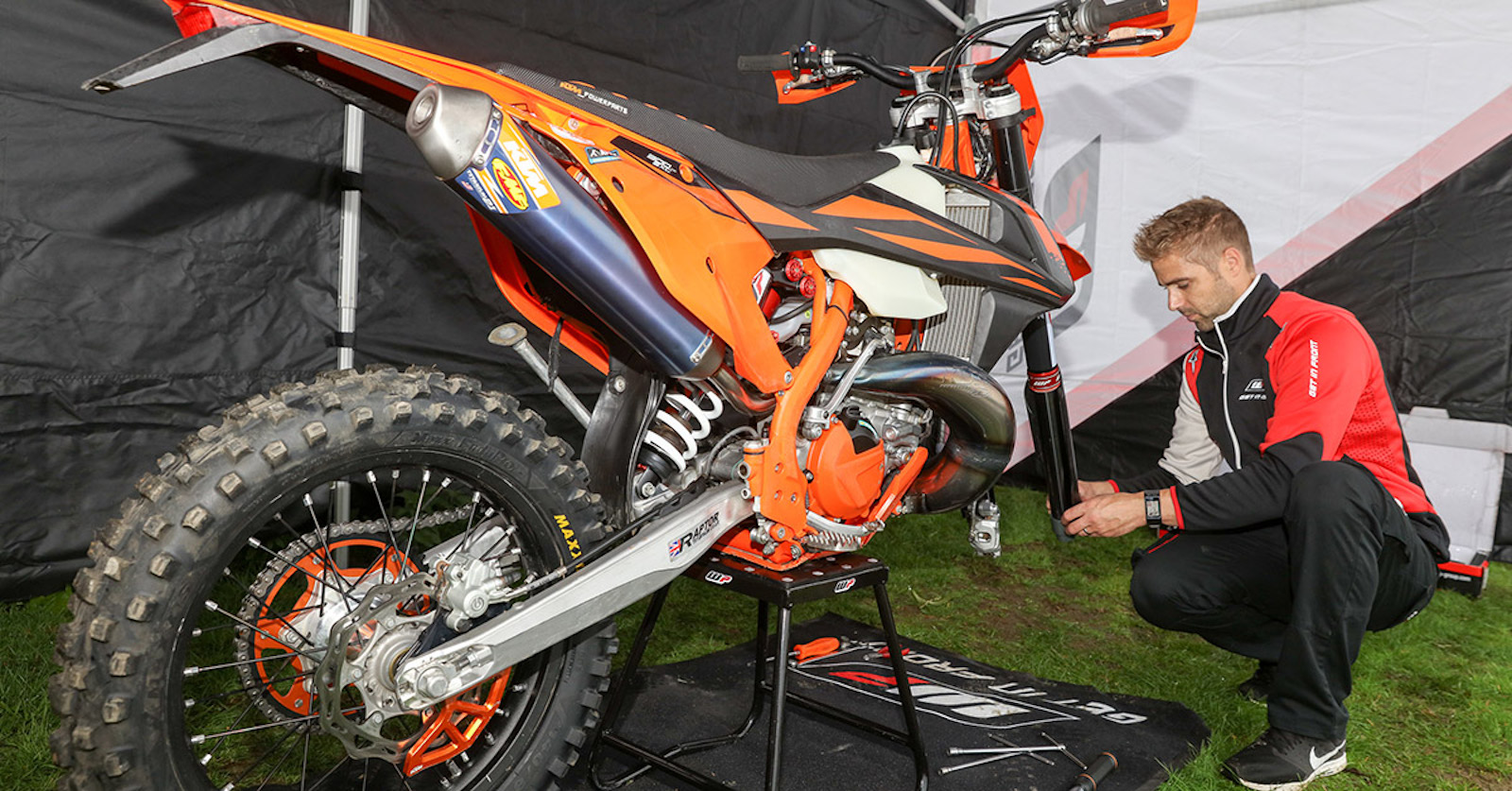 WP Cone Valve forks and Trax shock absorber probably need no introduction to many Enduro21 readers. These are the forks and shock combination fitted to many factory KTM and Husqvarna riders around the globe. From Erzberg to AMA EnduroCross to AORC to EnduroGP you will spot the top riders with this suspension.

A common misconception is the WP Cone Valves and Trax units are only for KTM and Huskys. To dispel that myth and to give us a decent test, we’ve been putting the forks and shock to the test on three different bikes.

WP stepped-up with the loan of some off the shelf Pro Components for one race only (sadly!) at the recent Hawkstone Park Cross-Country event. Our KTM 300 EXC TPI is the Enduro21 rolling test-bed for parts and the notoriously tough Hawkstone Park terrain gave us great opportunity to test the kit.

We also took the chance for a test day using the same Pro Components fitted to a Beta 300RR and Honda CRF250RX in a very wet and traditional enduro setting in Wales. 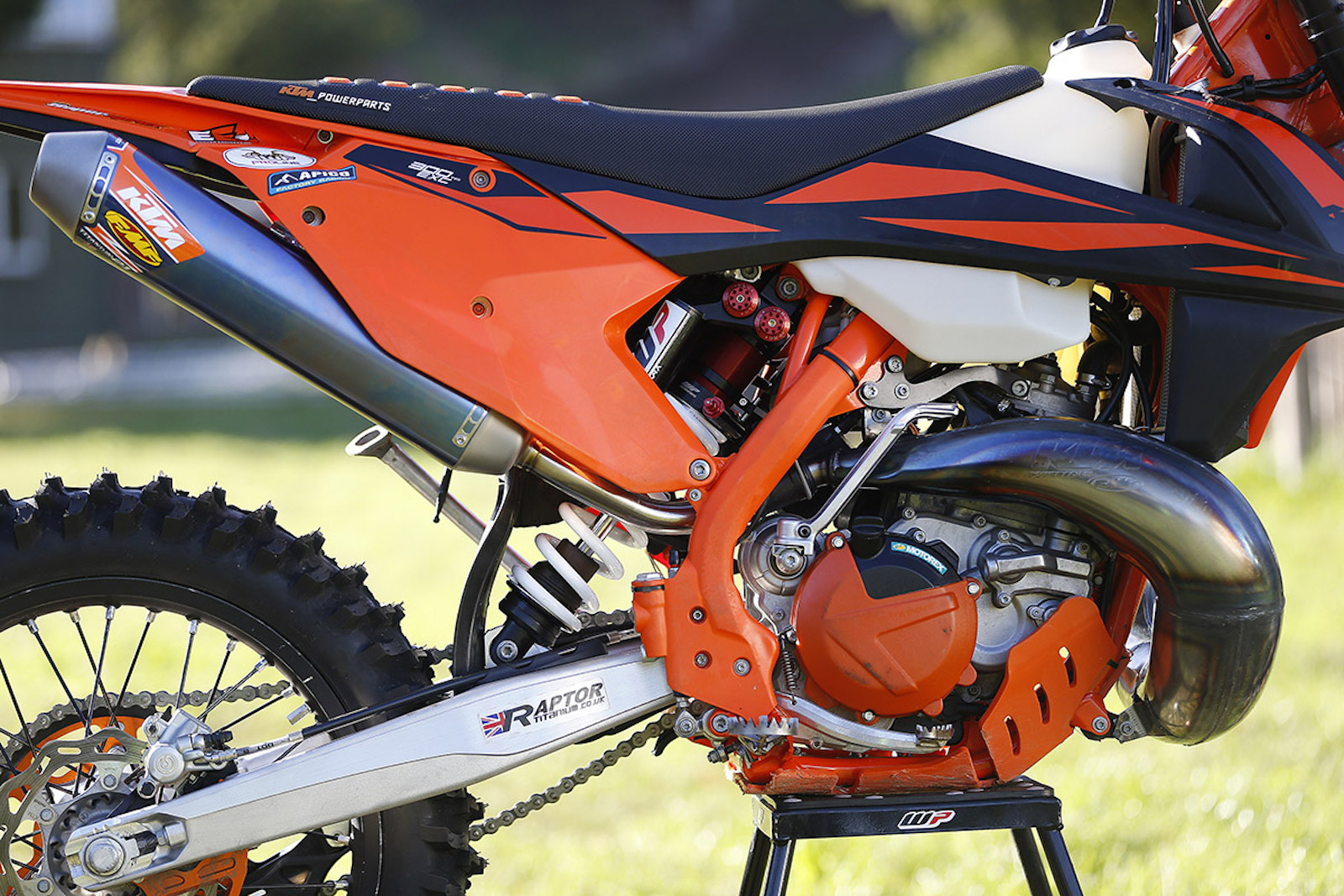 The MXMA 4800 Cone Valve fork permits almost limitless damping performance thanks to a unique valving system. The set-up of conventional damping systems is a compromise between comfort and bottoming resistance. The Cone Valve technology allows both factors to be controlled with outstanding damping behaviour in various riding conditions.

Made from highest quality materials and coatings, the Cone Valve forks come with harder and softer springs in the box and can be customised for every rider weight, riding style and conditions.

The BAVP 4618 Trax PDS Shock Absorber are the most innovative shock absorbers on the market. The compact Trax unit significantly improves rear wheel grip and has been successfully implemented by factory race teams to win titles.

The Trax system reduces the time-frame after a bump when acceleration is difficult due to slow rear wheel rebound. The Trax system registers the wheel is not in contact with the ground and immediately opens an oil bypass to allow faster rebound than a conventional system. The Trax shock absorber is available for PDS and link-type suspension linkage systems. 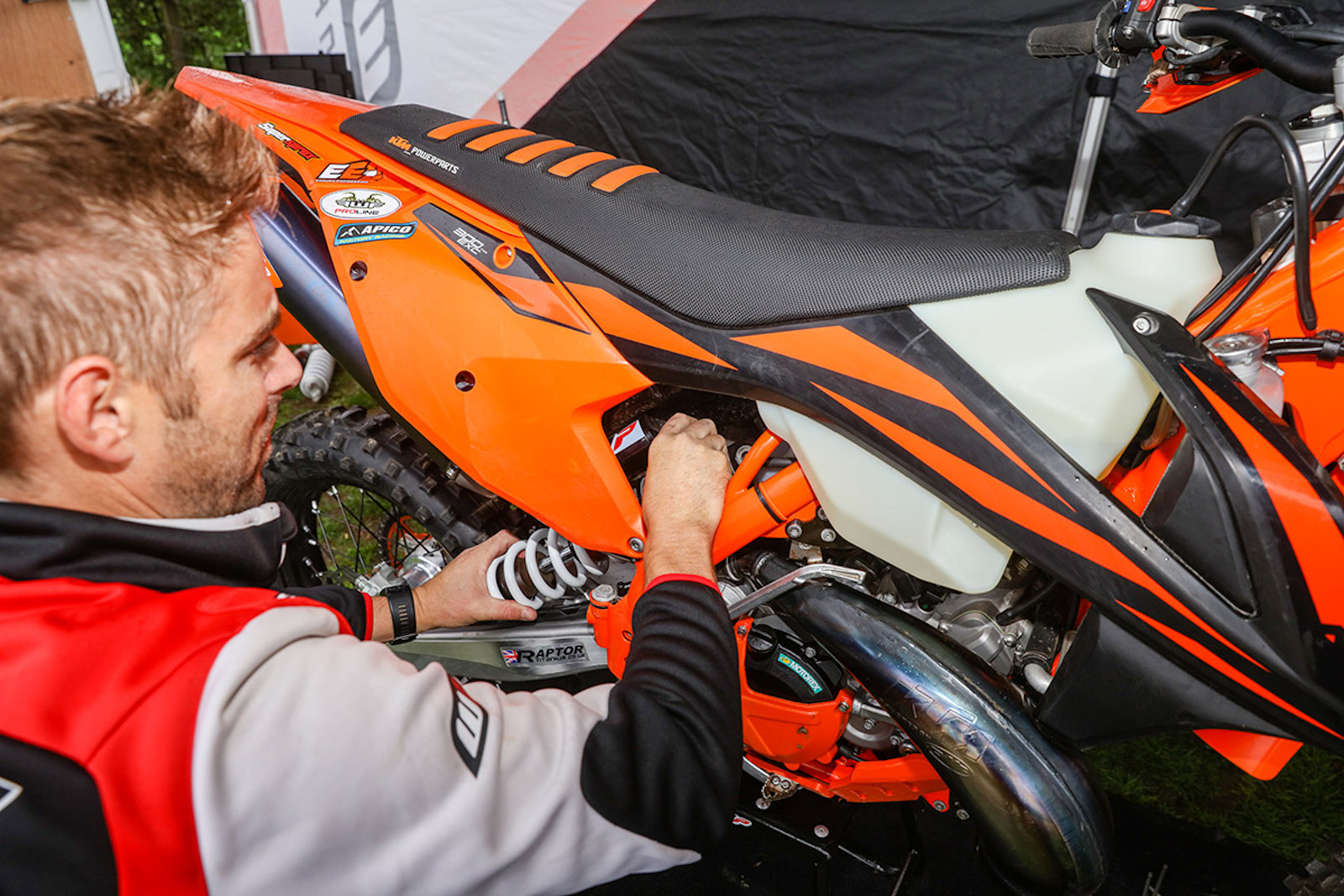 We’ve tested the Cone Valve forks and Trax shock before on stock bikes and on factory race bike tests but this is the first time we’ve had a test purely about trying the WP suspension and thinking hard about how it worked.

We spent two days testing with a Honda CRF250RX and Beta RR 300 Racing for one day then moved on to a race situation with our test bike KTM 300 EXC TPI.

The settings were as it comes out of the box for enduro – your WP dealer will know this and we don’t want to get too detailed in listing different settings here.

My weight (around 80kg) was correct for the standard spring rates but it also comes with harder and softer fork and shock springs to adapt to riders either side of the standard weight range. It’s worth pointing out some riders prefer the MX standard set-up and then work from there as a base setting.

After a few clicker changes to suit the way I ride and prefer a bike, we went straight into testing… 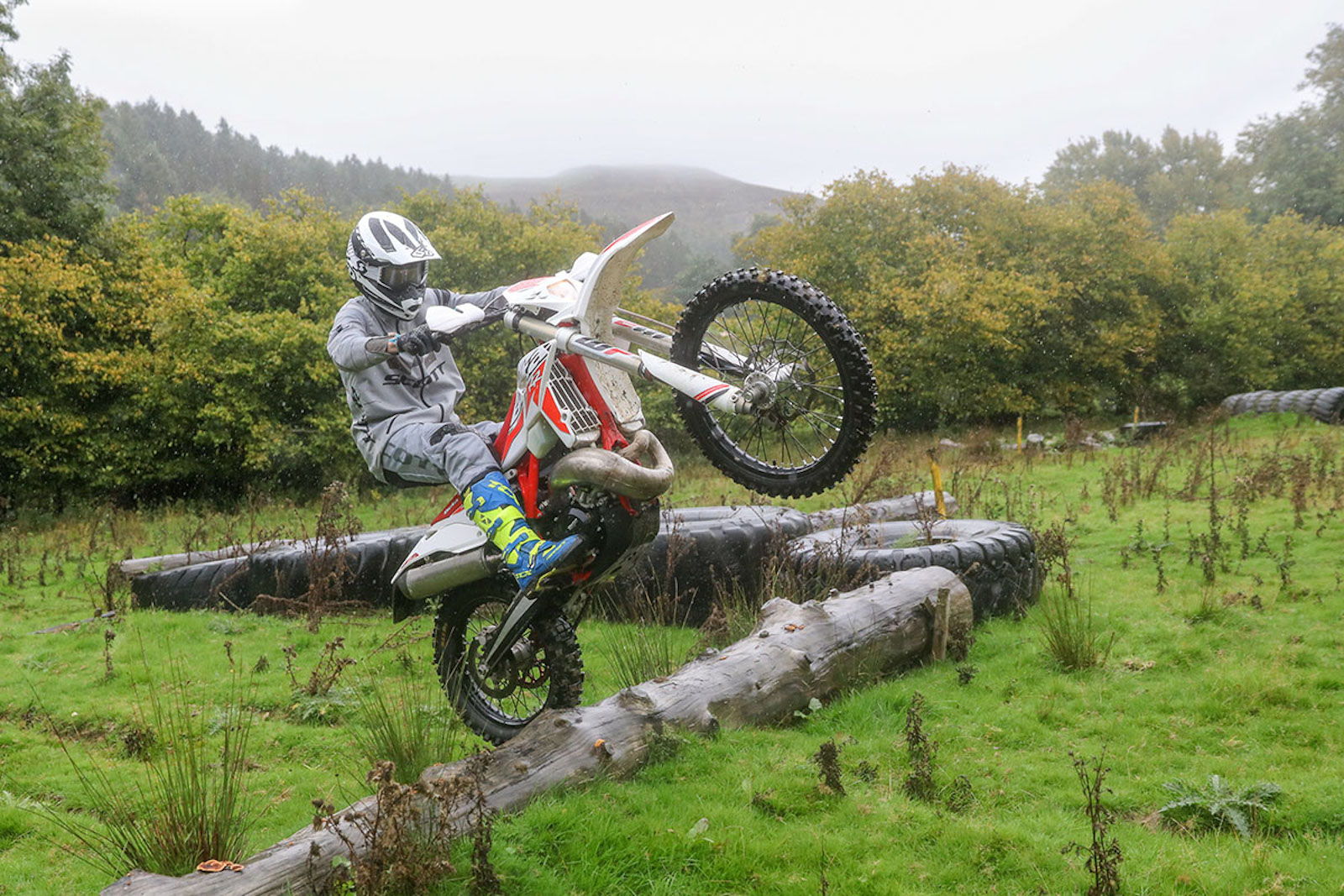 My trials background naturally makes me want a soft(er) feel to the forks but in enduro you still obviously need to be able to hit stuff hard and for the bike to behave itself on braking bumps, whoops and jumps without the kangaroo impressions you can find from stock suspension.

The first impression I found with this WP set-up proved exactly that – you can have that soft feel in initial movement from either forks or shock but still have the ability to hit stuff hard.

At Hawkstone Park Cross Country event a big cable reel near the end of the lap was a perfect example of the differences. With the stock suspension I had to ride it like a trials bike, lofting the front wheel higher up and throwing my weight forward as it hits to haul the back wheel up and over – hit it too hard and the bike springs onto the front wheel too quickly and with less control off the other side. 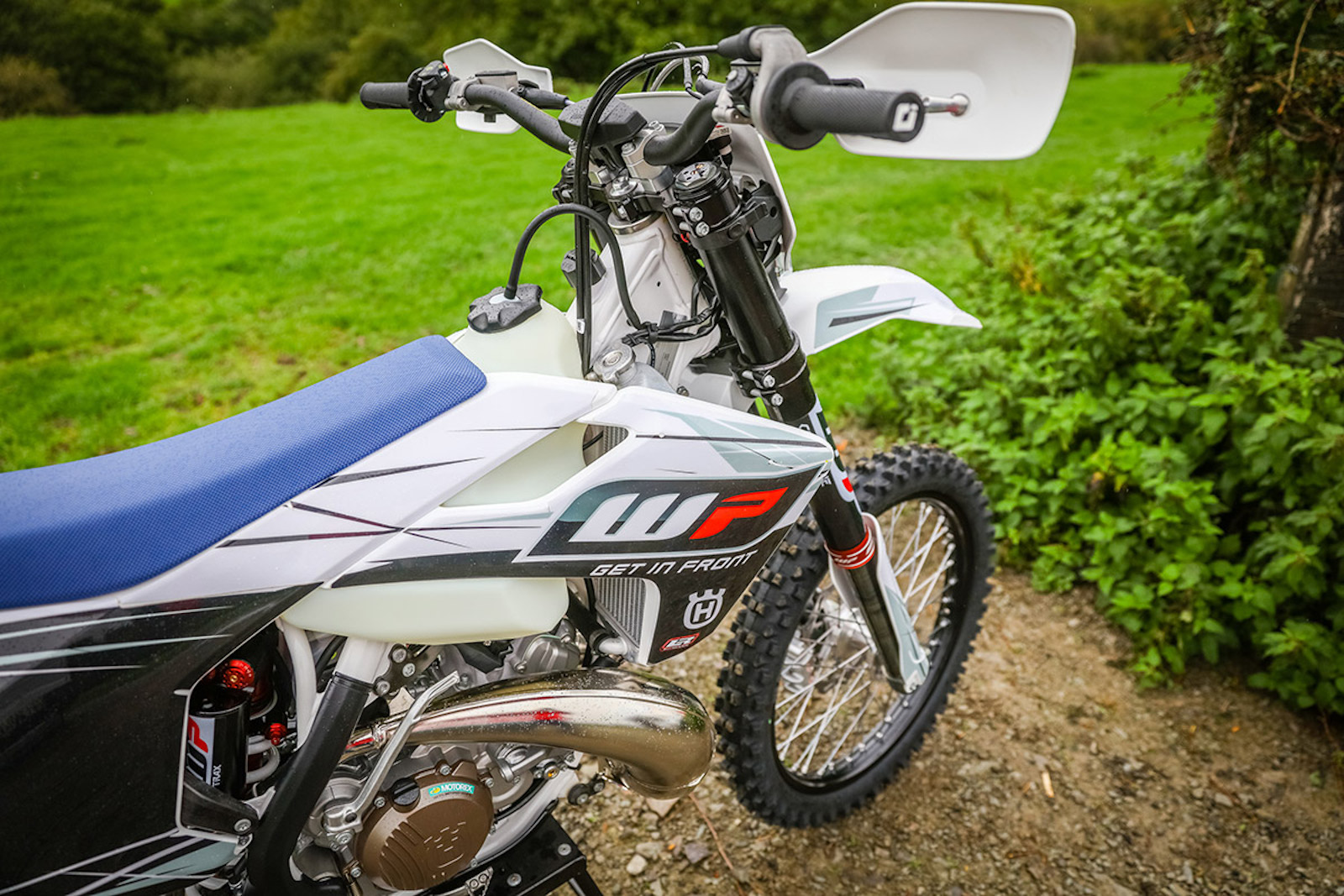 With the WP suspension I could hit it hard and it would climb up the cable reel, sit flatter over the reel and help me feel for grip to drive off it. Basically it copes and doesn’t over-react and makes this obstacle easier and quicker to ride.

A big positive from the Cone Valve forks is having feel for the small bumps so I could hit lines and ride the tight stuff with confidence in the front grip, but still having the bump-stop absorption on the big jumps. That means it has control over a wide range rather than being limited or compromising like the stock kit. It’s like having two set-ups in one. 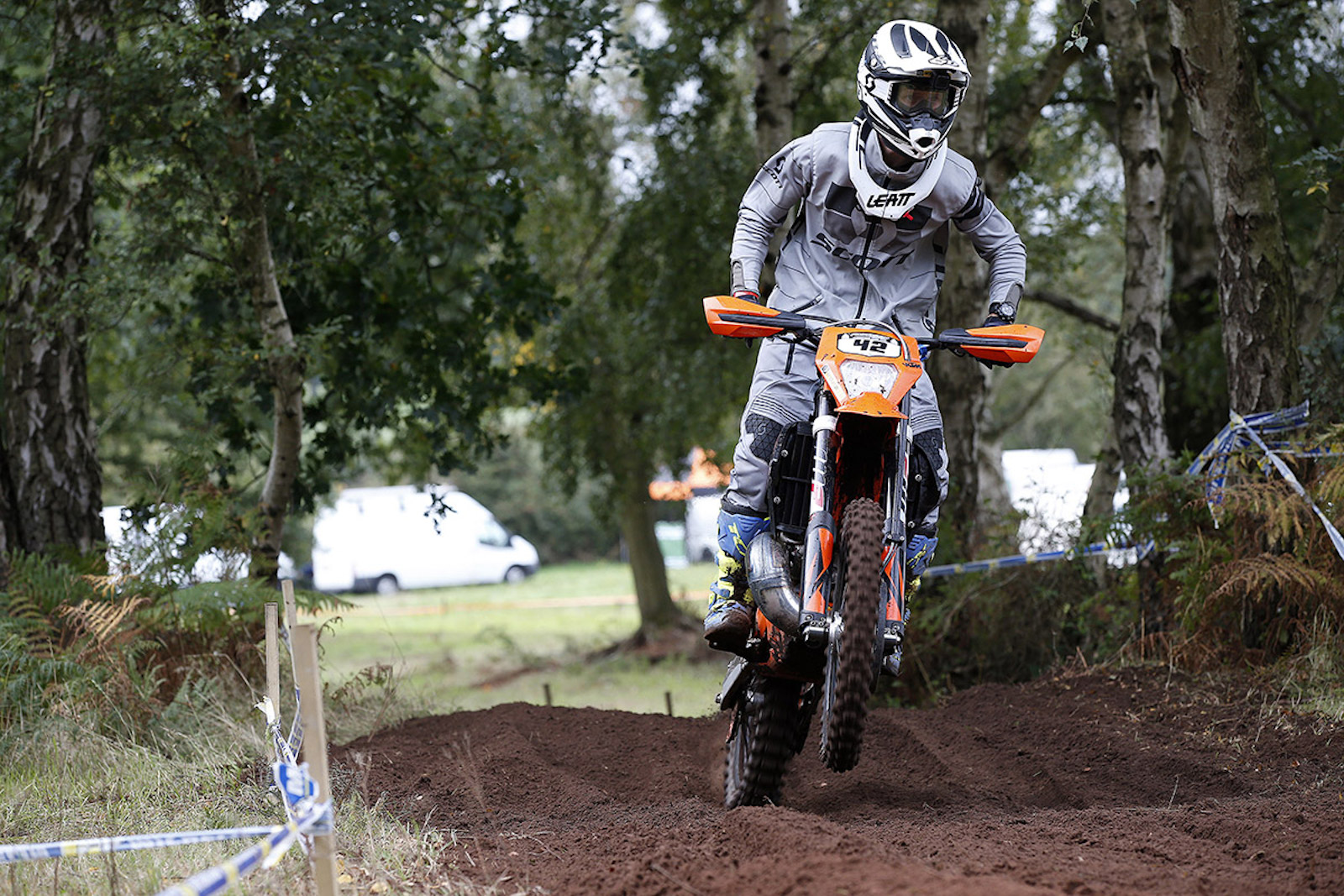 I rode a stock 250 EXC at the same event the year previous and it simply couldn’t cope with the track as it roughed-up. The shock over-heated and lost control of its damping, the big jumps were harsh on my hands and feet. In short it made life harder and slowed me down.

On the same whooped-out sections of the Hawkstone track, life was clearly much easier with the Trax shock. Everything is more controlled, the bike keeps flatter across the bumps and soaks big hits incredibly well.

Riding is less effort and it is easy to feel the reality of the Trax system reducing the time-frame to get the back wheel on the ground and give you drive grip.

The range of the adjustment is a bonus too. Gareth Edmunds from WP advised a few small changes to help the bike sit flatter and though the changes were small (just a few clicks) they were immediately effective and again, I felt more confident to ride faster. With the adjustment all happening externally the changes are quick to make also. 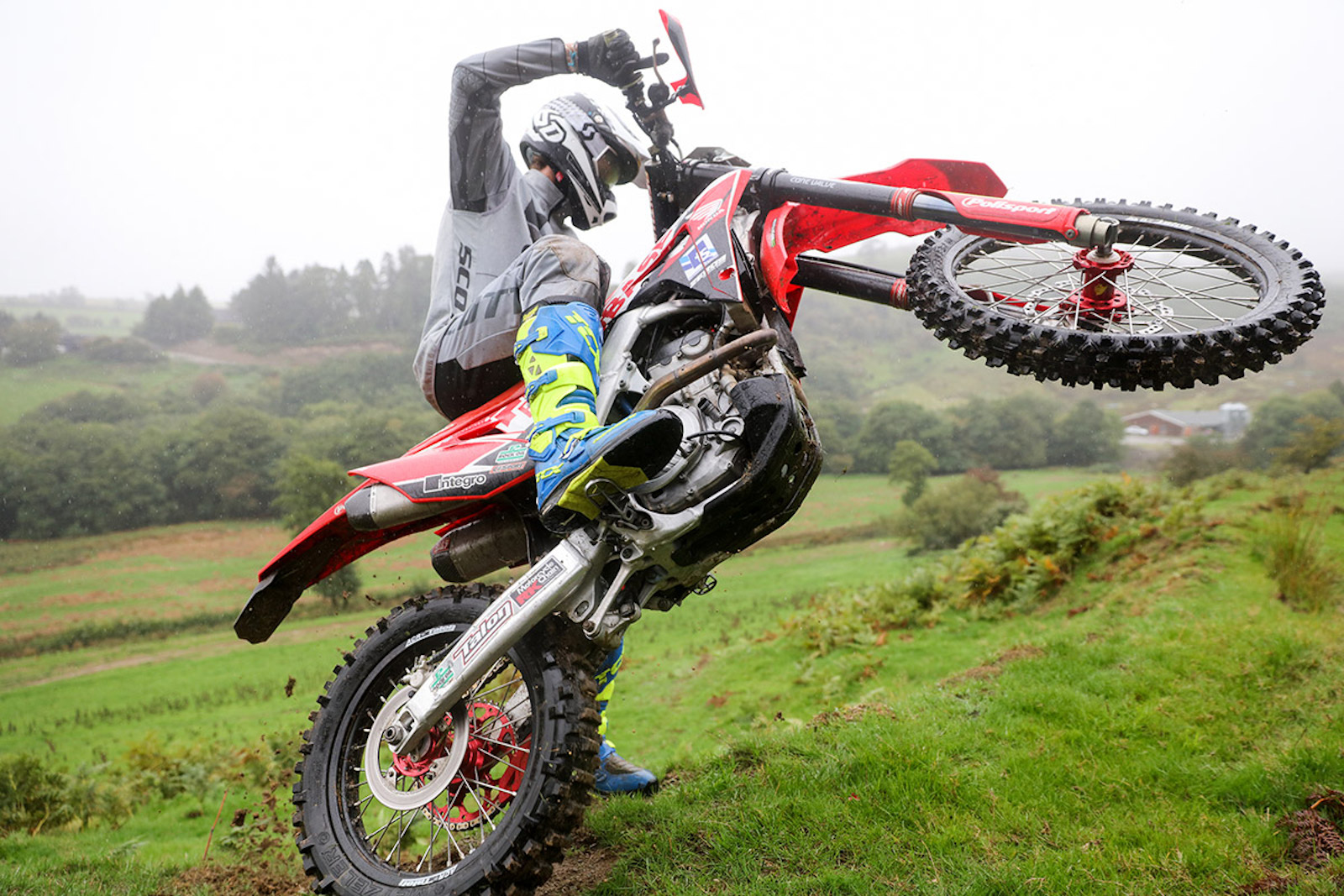 Comparing our set-up to other riders and their bikes in the same paddock at the Hawkstone, using the same WP Cone Valve forks and Trax shock, you can see the reality of the boast from WP that you have almost “limitless damping” adjustment.

It's a fact we noticed on the three bikes tested here with the Honda particuarly being set-up for a British Championship and Welsh 2-Day winning rider. Where the stock equipment quickly meets its match, the Cone Valve and Trax shock has the range to make life better for the regular rider as much as it gives the pro rider what they need on different bikes on very different tracks. 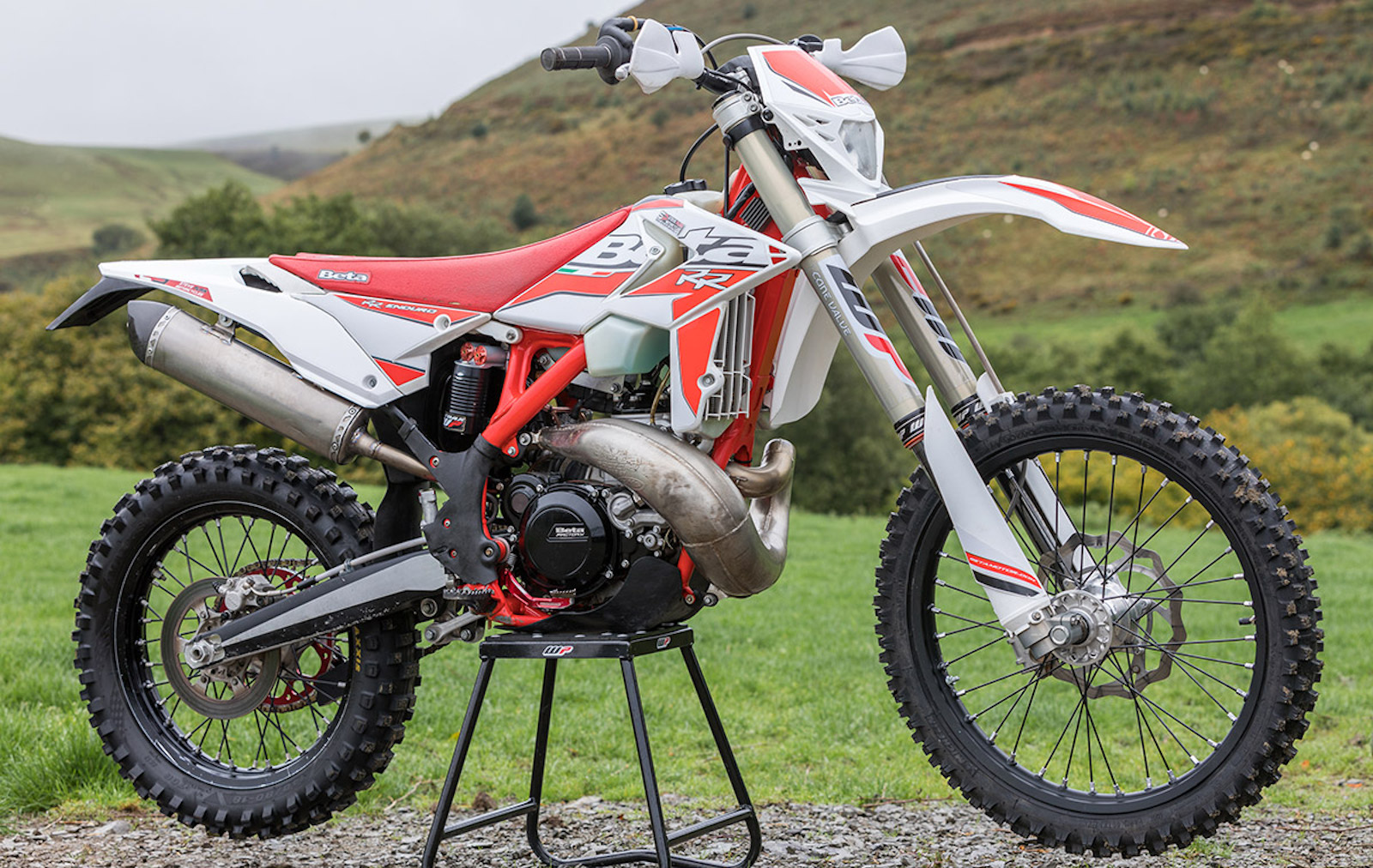 We’re under no illusion this is an expensive upgrade but ultimately it depends how serious you are about improving your bike. The Cone Valves and Trax set-up made a dramatic difference to the handling of our test mule TPI on one of the roughest tracks we know.

WP have no shortage of customers despite the price either, which tells you something. What price do you put on performance? I’d wager anyone taking a test ride would be surely tempted because the difference is clear. With regular servicing the suspension will last of course across seasons, so the investment isn’t an annual one.

For me it boils down to one major fact: this is the single biggest upgrade I could make to my bike above everything else like exhausts, engine tuning, titanium this or carbon fibre that. More or less a stock bike works fine in every way but the only thing holding me back from being a better rider (apart from my own fitness!) is the performance from the suspension – especially on a stock KTM. This is the answer. 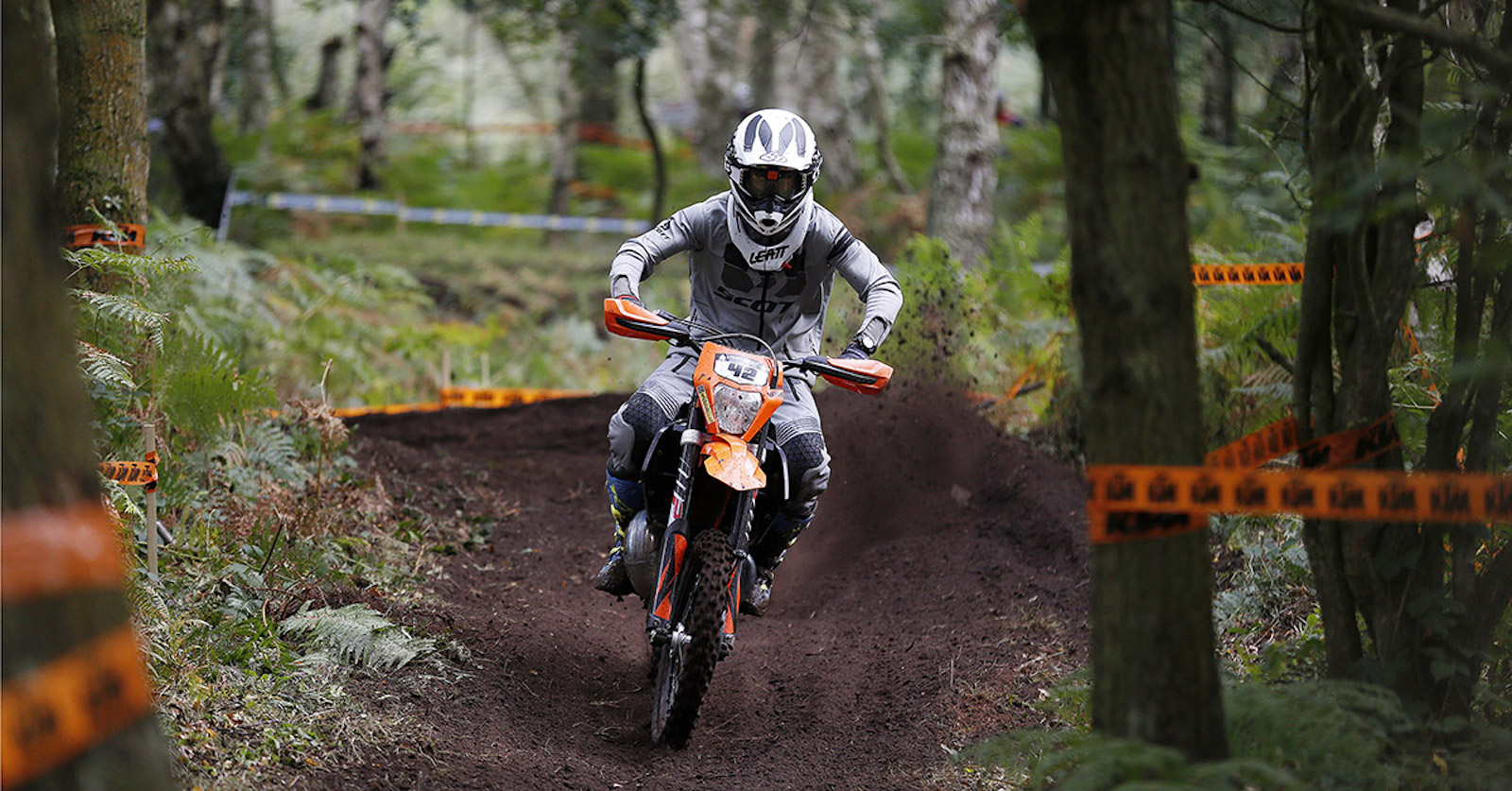 It is difficult to put a straight answer here, we're talking thousands for Cone Valve forks and Trax shock together as we've tested here – it will be different depending on where you are reading this so check with your local approved WP Suspension Center in your country via the link below.

Thanks to: Steve Plain Motorcycles for the Beta RR 300 racing and Alex Snow for the loan of his spare Buildbase Honda CRF250RX.