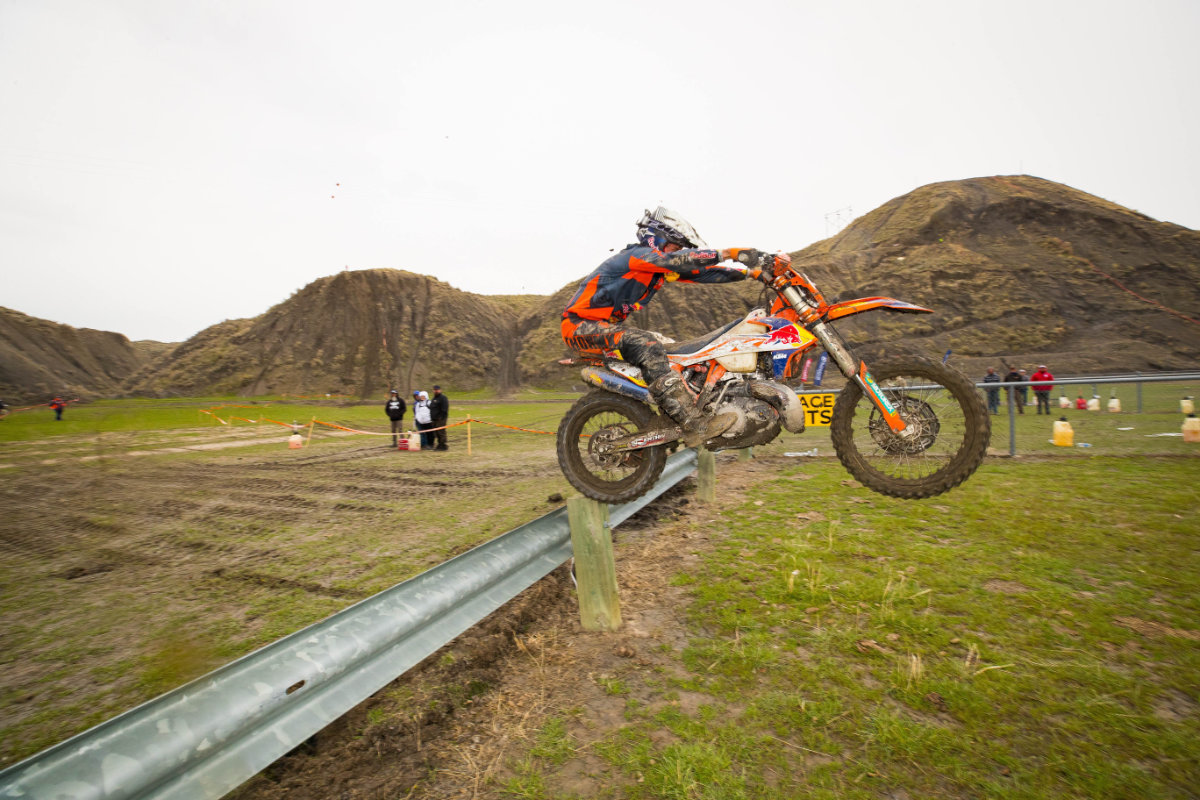 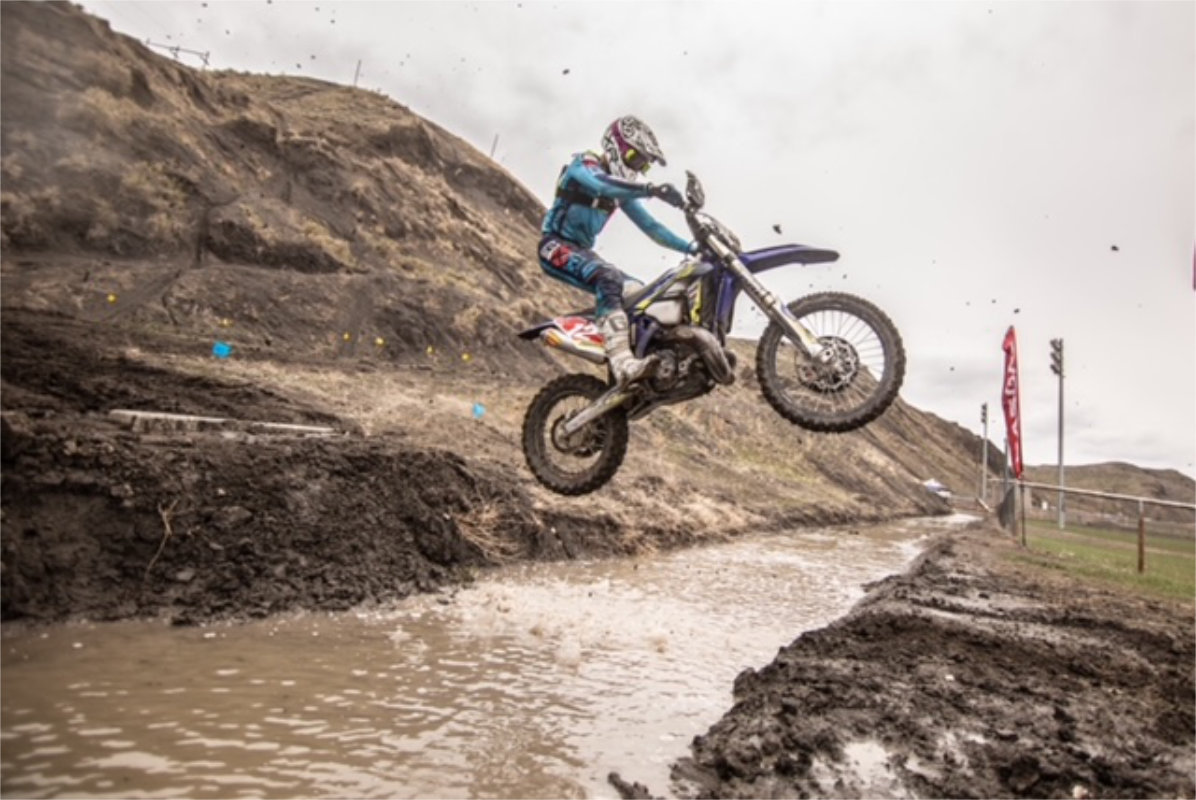 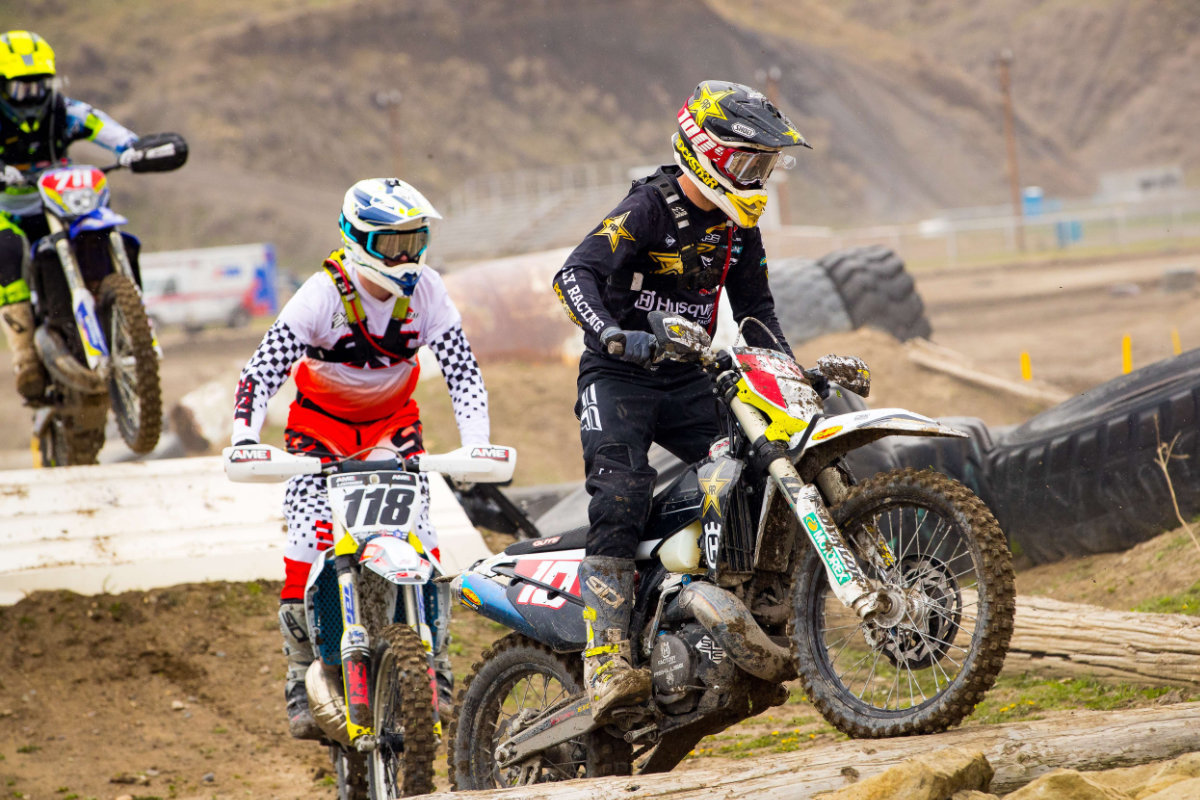 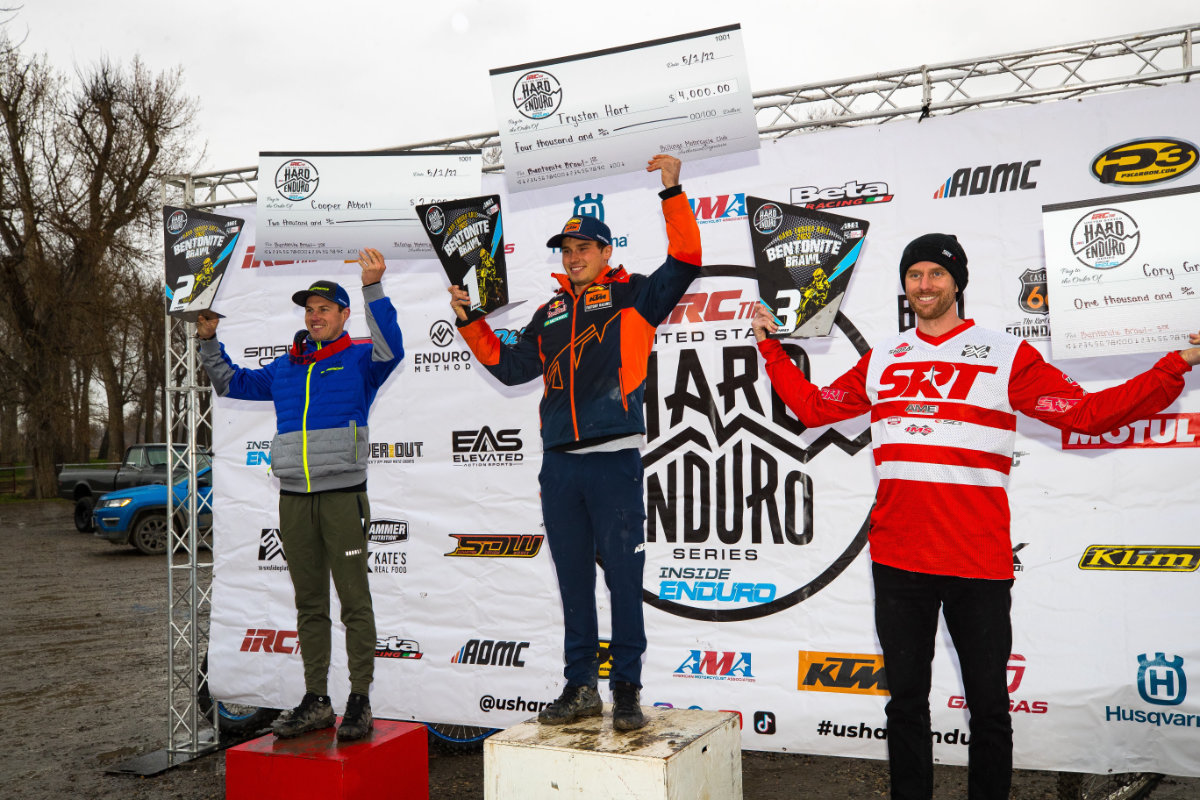 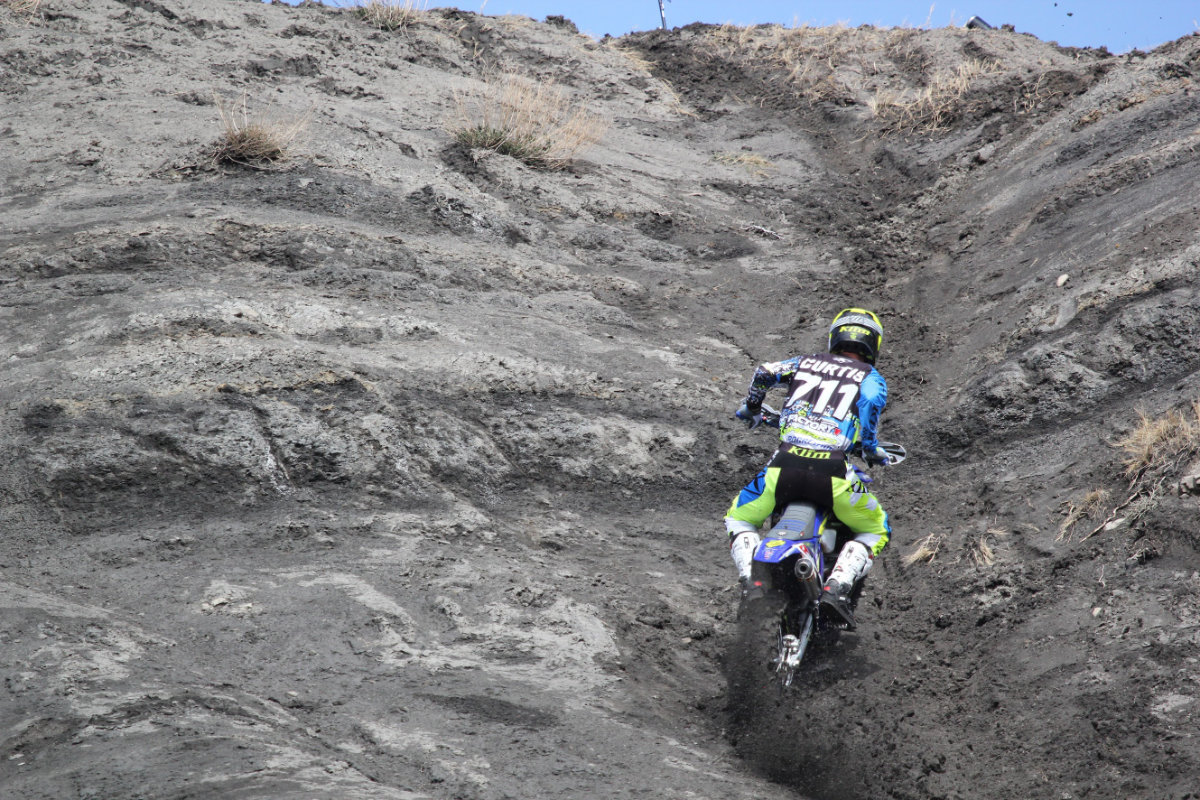 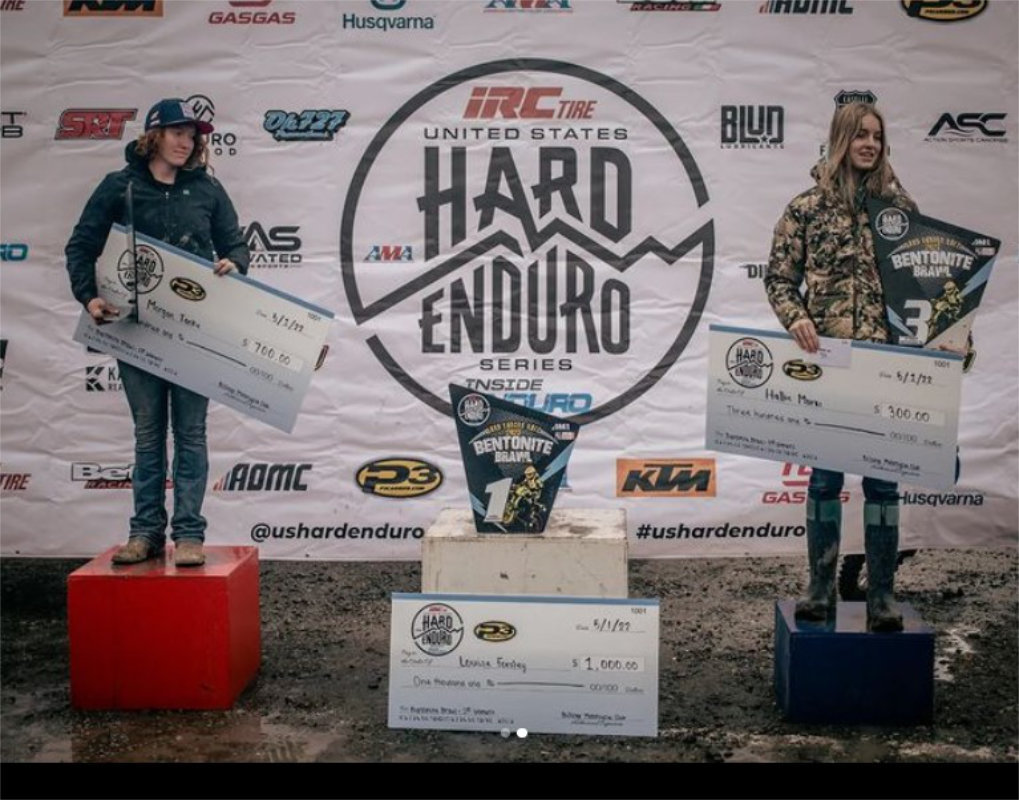 2022 US Hard Enduro Series: second win of the season for Trystan Hart at Bentonite Brawl

FMF KTM’s Trystan Hart claimed the win at the second round of the 2022 AMA US Hard Enduro Series, the Bentonite Brawl, in front of Cooper Abbott and Cory Graffunder – Louise Forsley dominates the Women’s pro class despite broken wrist.

The 2022 AMA US Hard Enduro Series travelled to the ‘motorcycling hill climbing capital of the world’, Billings (Montana), for the second round. The Bentonite Brawl offered a gruelling 30-mile course filled with long and steep climbs and descents.

Paying honour to their heritage, the racing kicked off on Saturday with a head-to-head hill climb prologue to determine the main event’s starting order where Trystan Hart topped the field after a close run against Colton Haaker.

Once Sunday’s main event began it was a battle between Hart and Haaker who exchanged the lead on multiple occasions and pulled away from the field in the first two hours of the race. But when they reached the mud hole section, Trystan found the right line leaving Colton behind.

The FMF KTM rider never looked back and went on to claim his second win of the series despite having to make multiple attempts to clean many of the final climbs in the race due to the rain adding further difficulty to the track.

“It was a rough day for me honestly.” Said Hart. “There was a lot of carnage! The promoters put a real hard enduro on this weekend. Colton was riding really good, too, so that made it hard on me, but it was good riding with him. They definitely had some gnarly hill climbs here at the finish, which was good fun for us and good fun for the spectators, too.”

Despite not the best strategy at the Saturday prologue, Cooper thought that the head-to-head races determined the starting order, but it was the two timed-climbs they did before that counted. He did enough for a second-row start.

On Sunday he started picking up places right from the start and despite making some mistakes and dropping back a little midway through the race, walking the last climb in the race on the day prior proved vital in his second-place finish.

“At the halfway point I was confirmed to be in P10 so I knew I had to push.” Said Abbott. “I was picking them off one at a time and then putting in a gap. By the time we were at the final three climbs, positions 2-6 were all bunched up. I was able to get past Ryder (LeBlond) and Keith (Curtis) after several attempts at the big climb and I think it took me seven attempts to get up it.”

“Cory (Graffunder) was just in front of me. He seemed to be cruising thinking he had a bigger gap than he had, so I pinned it and caught him at the last climb. I had walked this hill the day before so I knew the line I wanted. I knew if I could clean it I could hold on for P2. I was able to do that but I thought the finish was at the top of the hill and of course it wasn't.

I hadn't walked the downhill so I looked for Trystan's (Hart) line but the hard rain had covered it. So I went for what I felt was the best line. When coming down I was coming to a huge drop off and thought 'oh no', but I was able to lean back as far back as I could and I saved it to finish ahead of Cory.”

Cory Graffunder grabbed the final podium spot earning his first podium result of the season in the Pro class.

Haaker was Trystan’s closer challenger during the whole weekend with a close second-place finish in the prologue and then battling for the lead for the majority of the main event, until they reached the mud hole section…

“Trystan and I were out front just riding together and going back-and-forth – I’d lead and he’d make a mistake, then he’d get in front and I’d make a mistake, etc.” said Haaker. “We got to a nasty mud gulley, and he just barely got up it and yanked his bike out.

“His bike was dug in just enough that I had nowhere to go and I tried getting up but it didn’t work, so I ended up just looping my bike and throwing a 180 trying to get it turned around and I broke the subframe doing it. I also lost the muffler at some point, so I had to come back and fix the muffler and everyone else had caught me – I was down like 10 minutes – and the bike just barely made it to the finish. I think I rode well but it sucks to come out here and have one obstacle ruin the race like that.” 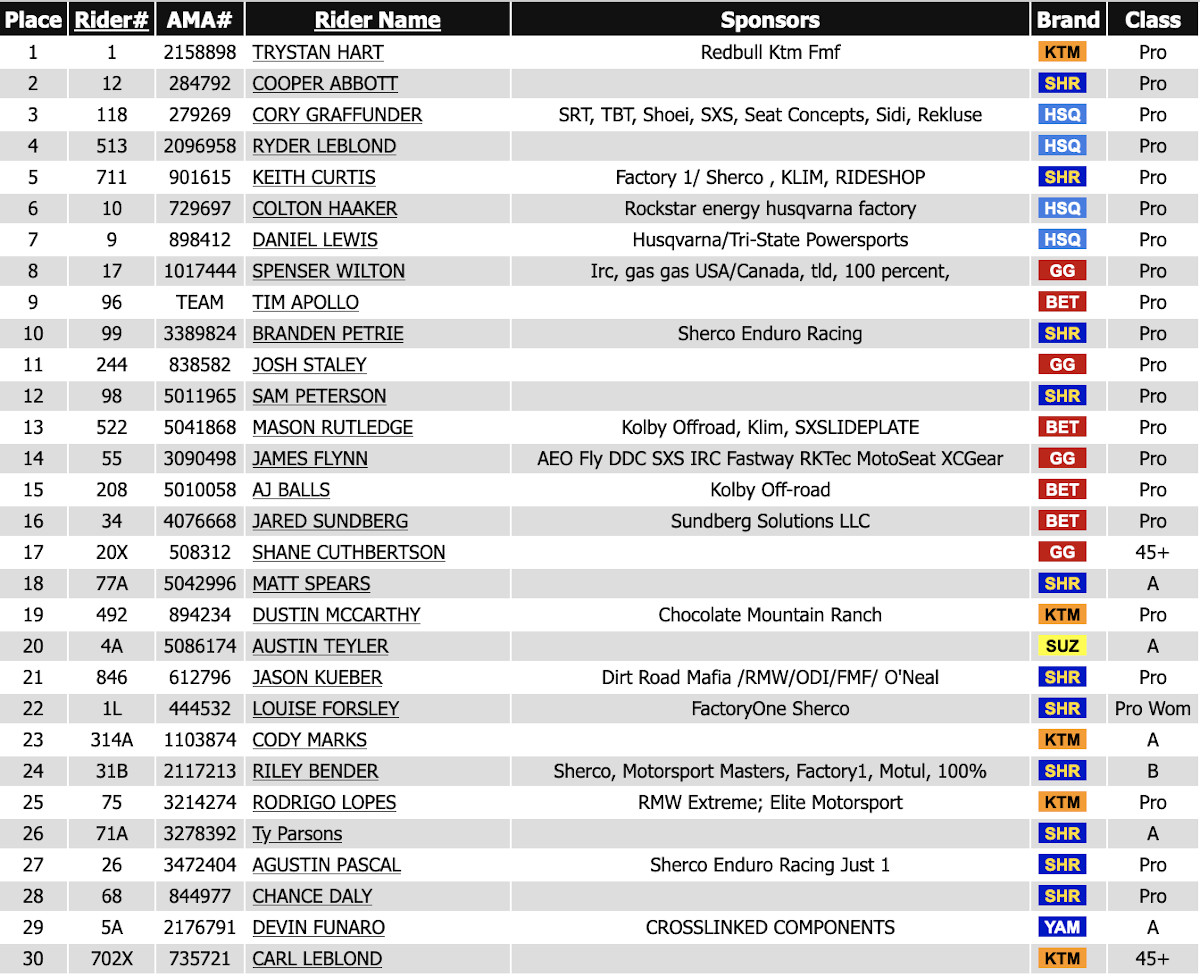 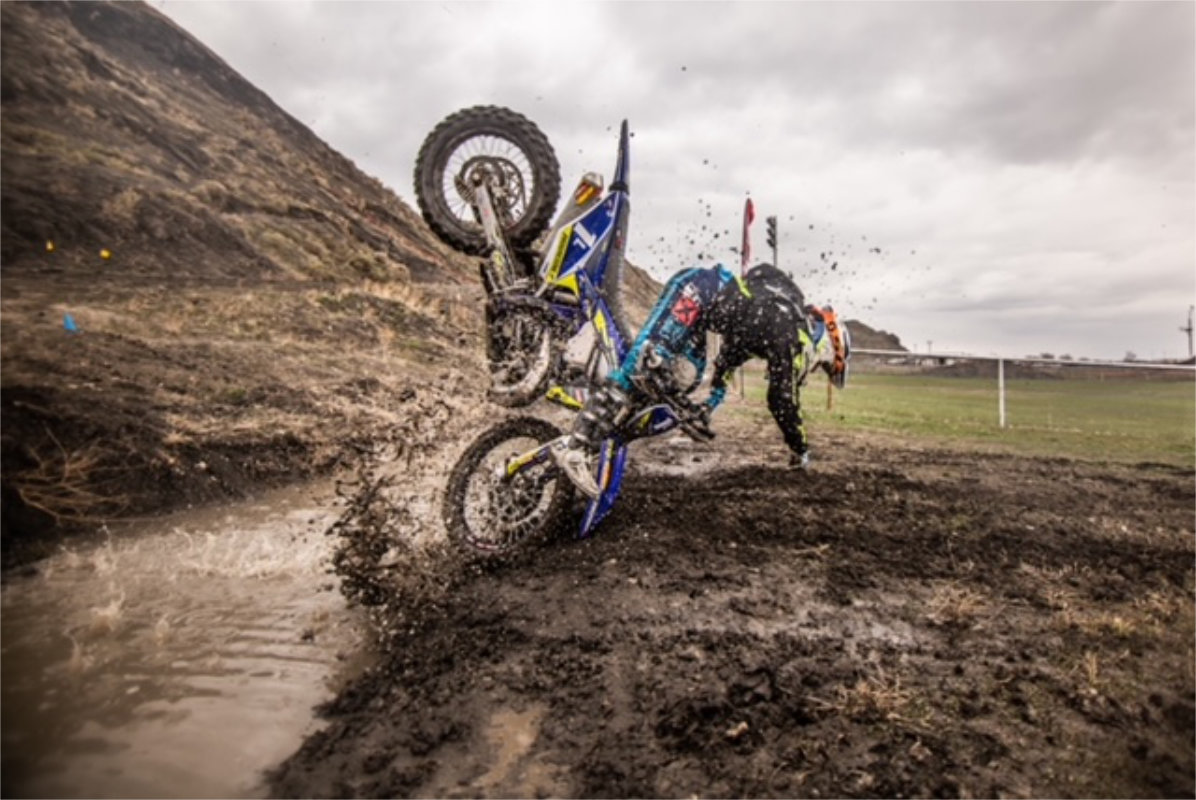 Louise Forsley had a very strong start, as usual for her in the Women’s class, and quickly began to open up a gap on her closest competitors, Morgan Tanke and Hallie Marks. Unfortunately, Louise had a bad get off jumping a water section (see image above) and broke her wrist which forced her to pull out of the race.

The 2021 Women's Champion did enough to secure her second win of the year, and a 22nd place finish in the overall classification after being the rider with most laps completed in the Women’s pro class.

The third round of the 2022 USHE will be the Iowan Hard Enduro in Spraugville, Iowa on May 21-22.