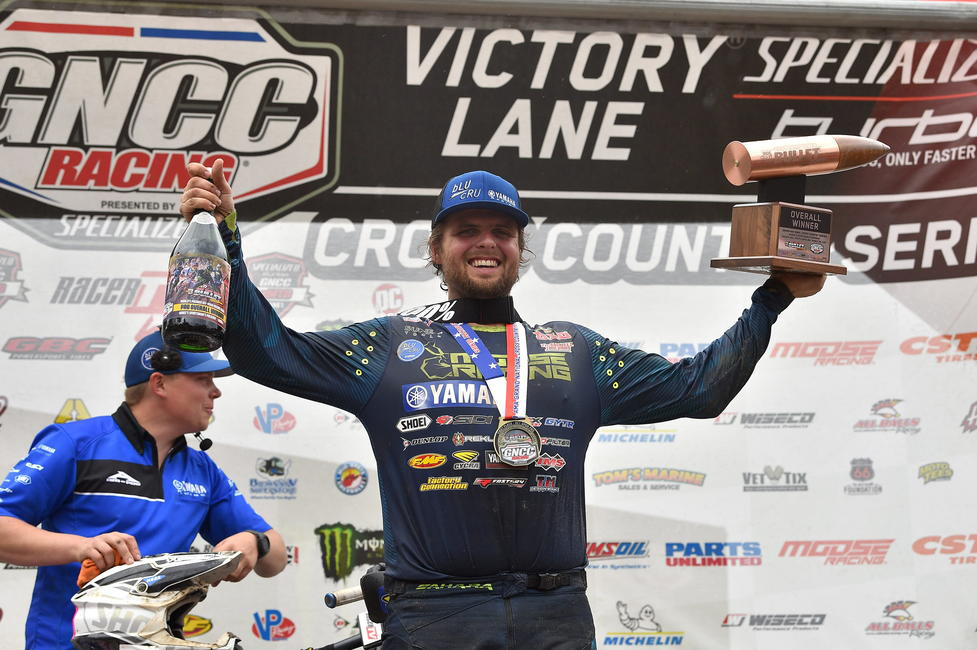 A two-rider, three-hour dogfight went right to the flag at the 2021 Camp Coker Bullet GNCC as Josh Strang and Steward Baylor make round four a classic – Girroir and Snodgrass equally impressive fighting for the overall podium on their rapid 250s.

It was North Carolina versus South Carolina in the battle for supremacy at the fourth round of the 20201 Grand National Cross Country (GNCC) series. Josh Strang is resident in the top half while SC resident Baylor was on home soil again at Moree’s Sportsman’s Preserve, Society Hill.

Both riders have suffered some bad luck this GNCC season so far with Baylor sitting out round one after a tree stabbed him and then suffering mechanical issues in Florida, Strang also had his issues at round three when a lapper caused a front brake failure.

Both showed they meant to make amends this weekend as Strang pulled a wicked holeshot on the Babbitt’s Online Kawasaki and Steward quickly got in behind him and the pair set about pulling clear of the field.

By the penultimate lap the weather was also playing a role as rain fell and the goggles came off. Strang looked like he had the win in the bag but with a decent gap Stew turned on the gas to close Josh down again, retake the lead for the final lap and close out his second race win on the bounce for Am Pro Yamaha.

“That was intense,” said Baylor at the finish, “I think both of our bikes were down on power in that last lap, you could hear it. It’s tough riding in these conditions knowing your bike could blow up.

“I could feel him close behind, racing like this is incredible. I’m just waiting for this guy [Strang] to start getting old!”

12 months ago Josh Strang scored a victory at this same event ahead of Kailub Russell. The 2021 race result, after so much effort for the three hours, was a disappointment for the Aussie who came so close to repeating the win.

“I’m pretty bummed to be honest, it was so close.” Strang said at the finish. “That last lap Stew put the hammer down and I was just hanging on, waiting for him to make a mistake.

“It was a good day though, I got the holeshot and lead for a good part of the race and after the problems at the last round it was good to get back on the box.”

The result sees Strang move into second spot in the standings and just three points behind the leader. 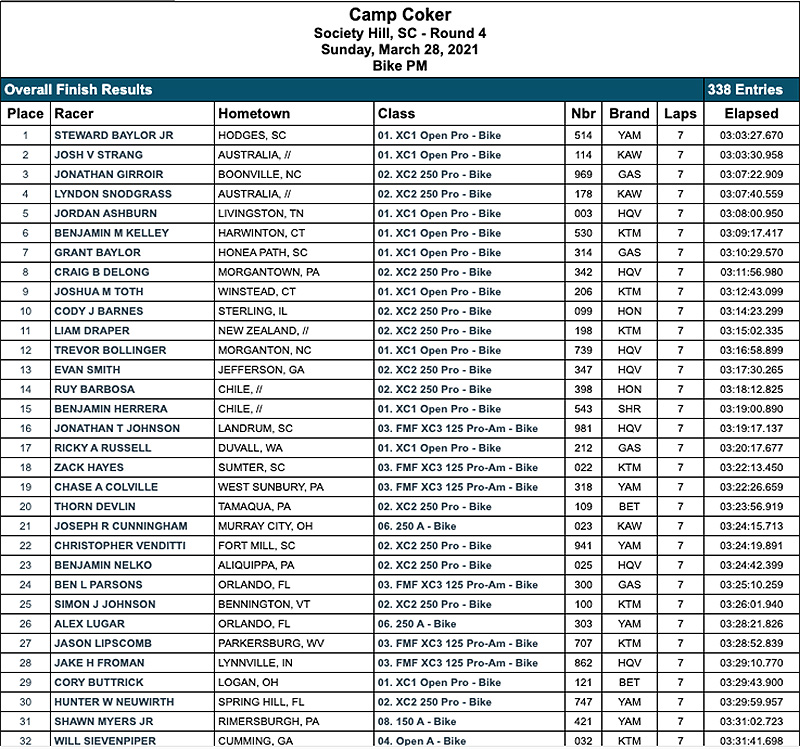 The win makes a healthy dent in the points deficit Steward suffered at the start of the season. He arrived at Camp Coker 34 points down on championship leader Ben Kelley but that now closes up to 19 with nine rounds still to go and Strang is stalking. 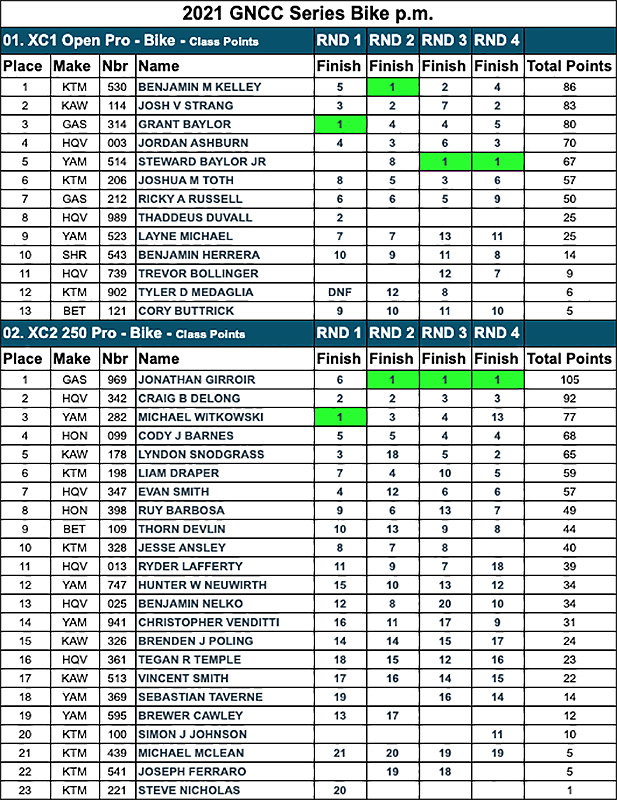 “It was a rough day.” Says Ben Kelley of his Camp Coker Bullet GNCC which saw the championship leader finish in fourth and lose valuable points. 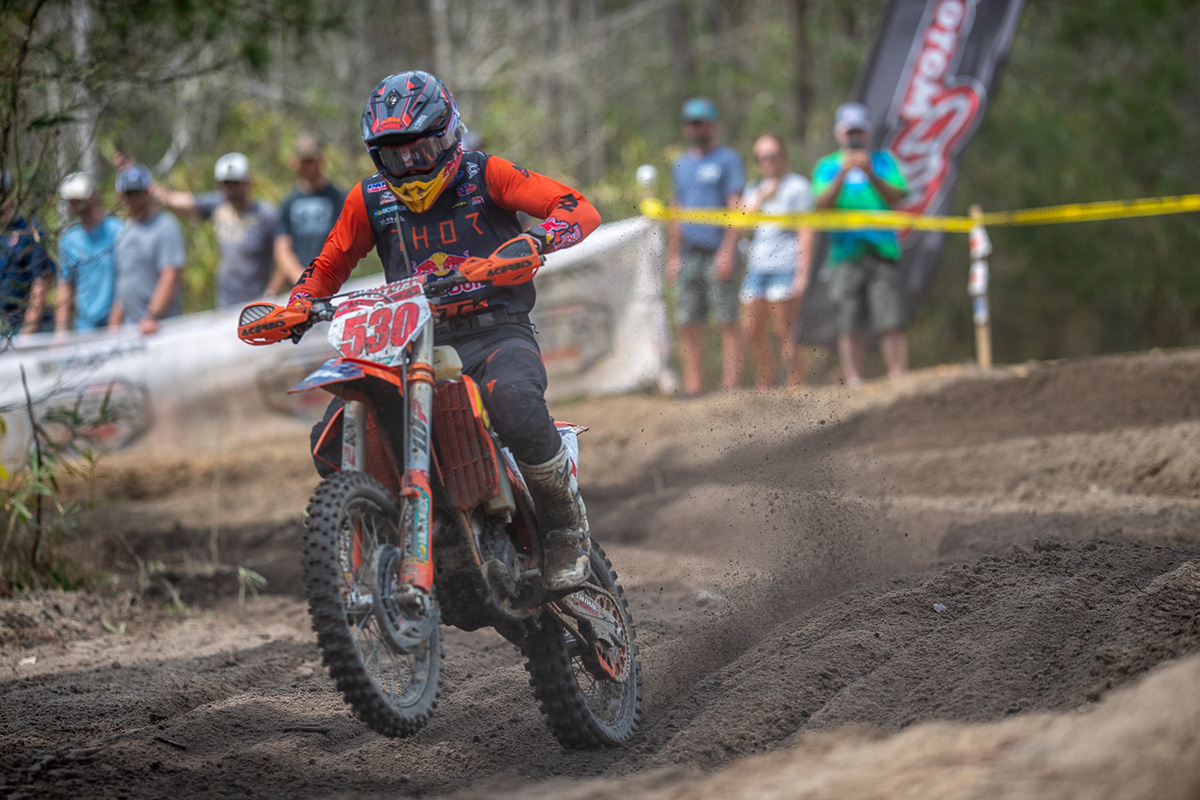 As Kelley explains below, the FMF KTM Factory Racing rider’s day was made harder by getting stuck in a mudhole early on and having to claw from behind. Ben was homing in on third place but the effort, plus the bad weather arriving, saw his charge blow out to leave Mr Consistent, Jordan Ashburn, once again on the XC1 class podium and fifth overall.

“I got hung up for about 10 seconds in the mud hole around mile one and lost the pack.” Explained Kelley. “I was able to go from last to third on the first lap and then after that, I just wasn’t feeling it. I was so tired and it was all I could do to just make the laps. It’s a super frustrating day but I did the best I could with how I felt.”

Third on the ground and just two minutes back on the leaders would be impressive for anyone given the speed Baylor and Strang showed out front but to do this on a 250 is worth applauding. 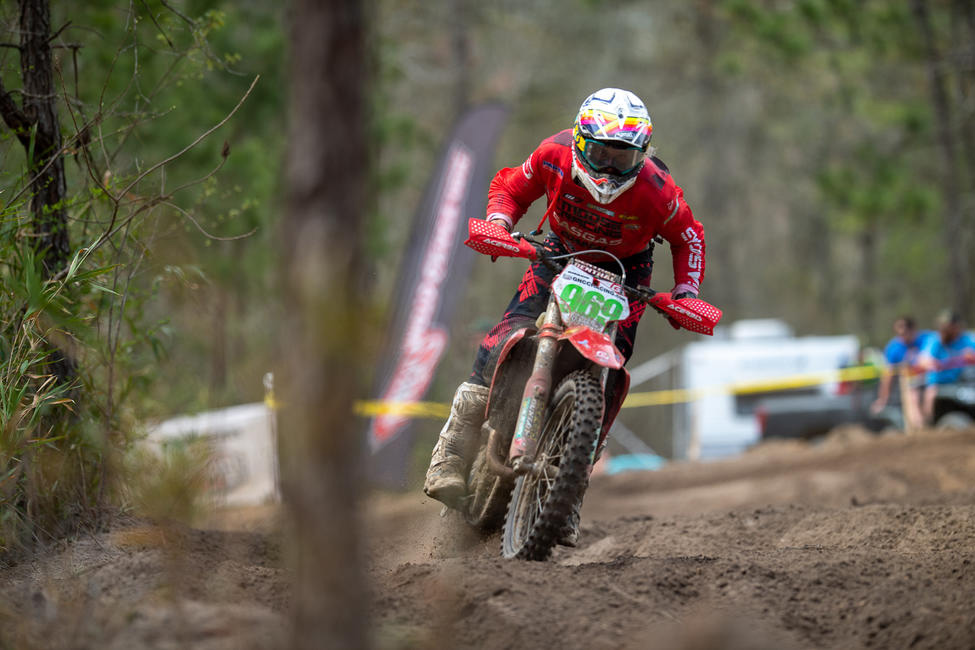 Lyndon Snodgrass held the 250 Pro class lead for much of the first two hours, picking off the XC1 riders as he went. As the rain and wind took hold of the race so did Johnny Girroir and started to haul in the Babbitts Online Kawasaki of Snodgrass.

Goggles (Girroir) or no goggles (Snodgrass) the battle was fierce on the last lap. As brutal as the track was by then the Australian was determined on the back wheel of Girroir’s GASGAS but it was not quite enough as Johnny took his third straight win of the season. Snodgrass had to settle for second with Craig DeLong third. 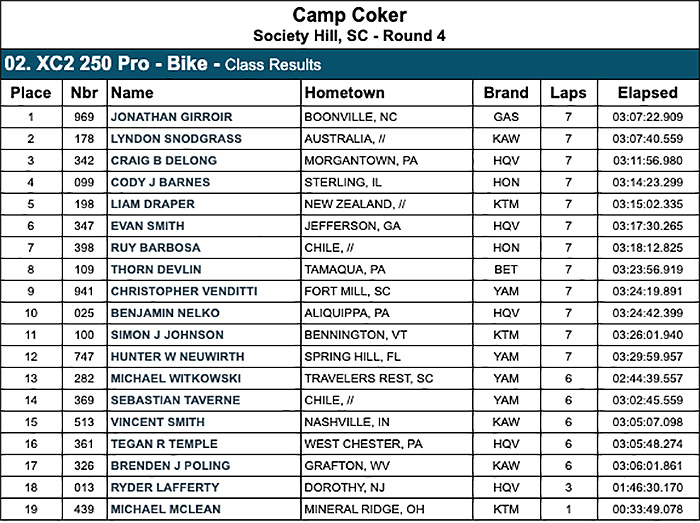 WXC, the Sheets and Archer show

Becca Sheets and Rachel Archer continue to set the bar high in the Women’s class. The pair have now taken two wins apiece in the 2021 season with Sheets edging her Yamaha rival at Camp Coker. 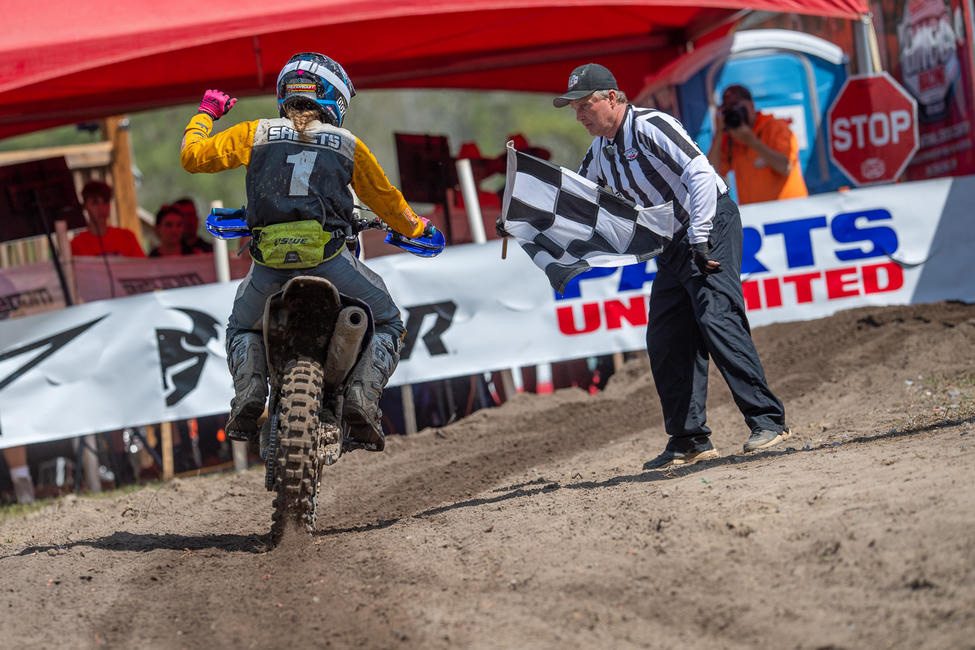 Sheets, who says she will retire from GNCC Racing at this end of this season, is looking to ape Kailub Russell and go out on top say the whole race was a good one: “We were all together off the start and had a good battle for the first laps until Rachel and I pulled away. We kinda duked it out for the rest of the race but it came down to the last lap in the end and I was able to pull a little gap.” 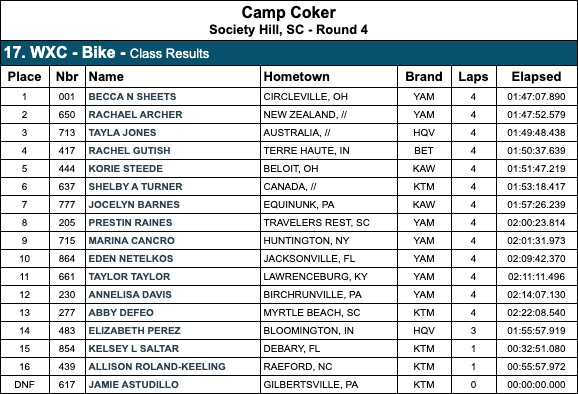