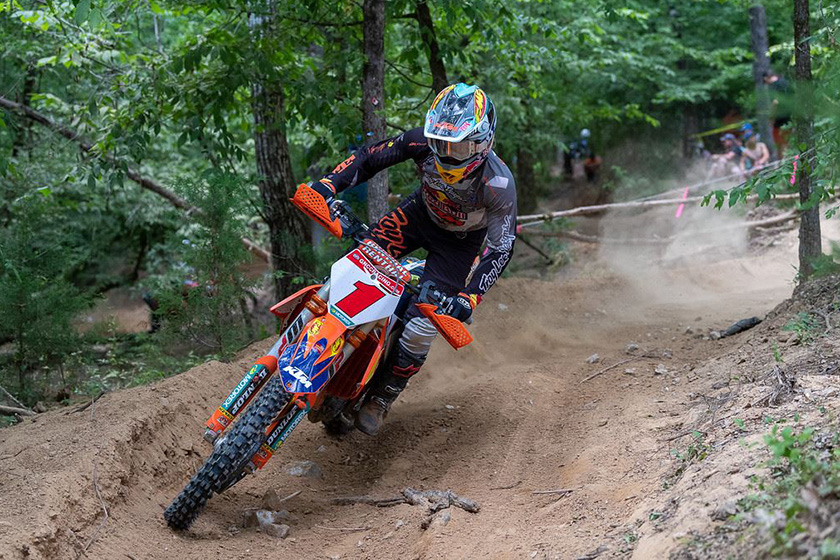 Bulldog GNCC: Kailub Russell “gets lucky” with fourth win of 2020

Luck plays a hand in Kailub Russell’s fourth straight Grand National Cross Country win of 2020 at The Bulldog GNCC where Ricky Russell and Josh Strang took the fight to the reigning champion – Ricky Russell dramatically crashed out on the final lap.

After a two-month hiatus due to the COVID-19 situation, GNCC Racing sparked back into life at the Bulldog at the same venue they left back in March at round three, Aonia Pass MX – albeit amid a very different atmosphere amid face masks and social distancing.

Ricky then traded the lead with Kailub in the final lap until, reports from the track say, a clash between the pair took Ricky down in a high-speed section, braking his handlebars in the process which in turn injured his leg resulting in a hospital trip – get well soon Ricky.

That let Kailub Russell off the hook in what looked like becoming another down-to-the-wire final lap, just as it had at the previous round between Russell and Steward Baylor (who was sitting out the race after parting ways with FactoryONE Sherco).

Kailub it was then who maintained his 100% winning record in 2020, taking four from four and crossing the line four seconds ahead of Strang.

“I was pretty relaxed out there the first three-quarters of the race,” said Kailub who suffered with a lack of hydration during the race, “I got the holeshot and led pretty much the first five laps and then I got held up a little bit behind some lappers and those guys sucked right up to me. Ricky [Russell] was riding really good and it was kind of his race to win at the end but he went down pretty hard and I got lucky a little bit.”

Speaking about the last lap incident with Ricky Russell to CycleNews, Kailub says, “He kamikaze’d himself there about the three or four-mile marker. He tried a crazy line…We were racing hard and not giving up an inch, but it was a completely avoidable crash.” 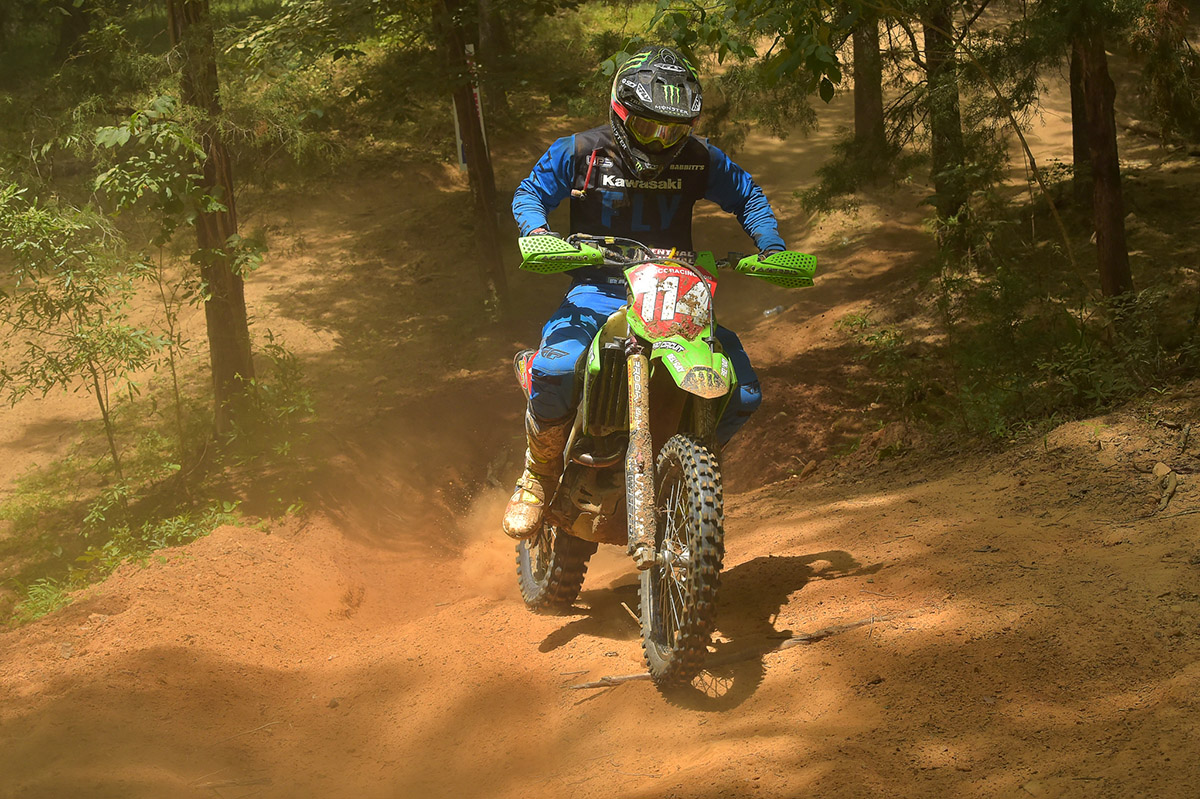 Josh Strang came home in second place after working his way through the dust from seventh place early on. It was another hard fought podium for Strang and the result, plus Ricky Russell’s no-points score, puts Strang second in the points and Kailub’s nearest challenger in the championship. Who would have predicted that at the start of the season?

Rockstar Energy Husqvarna Factory Racing Team’s Craig DeLong earned his second-straight XC2 250 Pro class victory at the Bulldog GNCC after an impressive performance in the class and overall where he took first and third places respectively.

DeLong repeated Russell’s XC1 pattern to take the holeshot and pushing hard in the early half of the race. Passing his way through the XC1 field, Craig grew a 54 second lead (in class) at the halfway point before slowing the pace in the final laps to finish eight-second ahead of Ryder Lafferty. 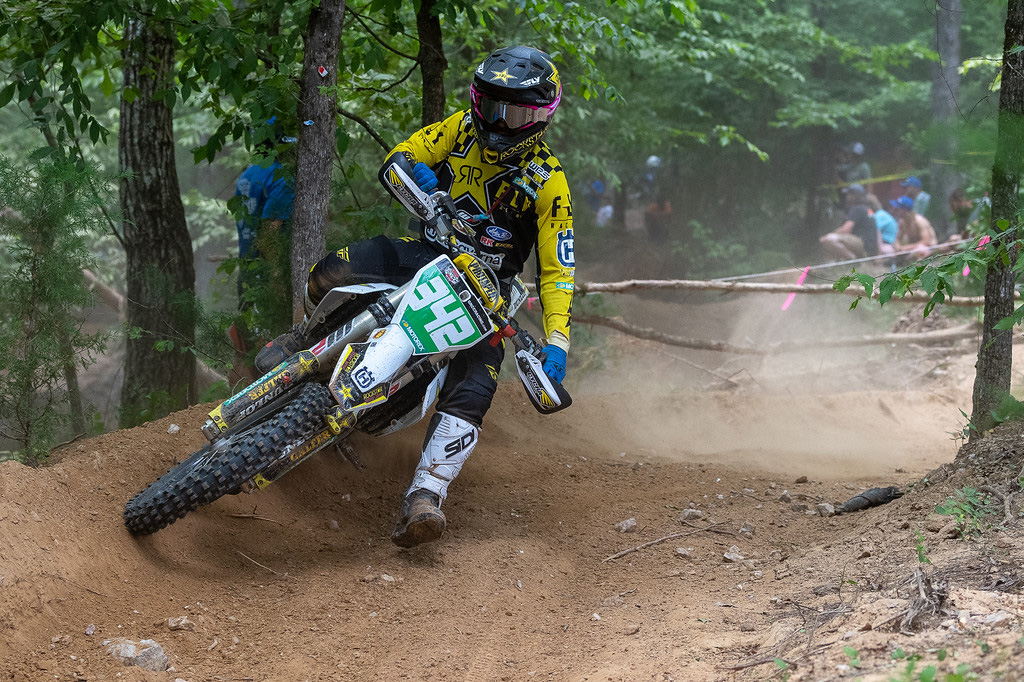 With four rounds completed, DeLong now holds the lead in the XC2 250 Pro Championship: “It felt weird to take some time off, so to be back racing feels really good and it’s even better to come away with my second-straight win,” DeLong said.

“I had some pre-race jitters, I felt like it was the first race all over again but I’m happy to get it over with and keep moving forward in the championship standings. We’ve taken over the lead there and that’s really my goal right now and that’s ultimately what we’re working for.”

For his part Ryder Lafferty put in his best performance of the season (read ever at GNCC) bringing it home second, just eight seconds down at the finish. The season has been a tough one for the young XC Gear/EnduroEngineering/Husqvarna team rider who injured his foot early on. The lay-off time has clearly helped with recovery time and allowed a step up to the podium.

Another WXC victory for Becca Sheets 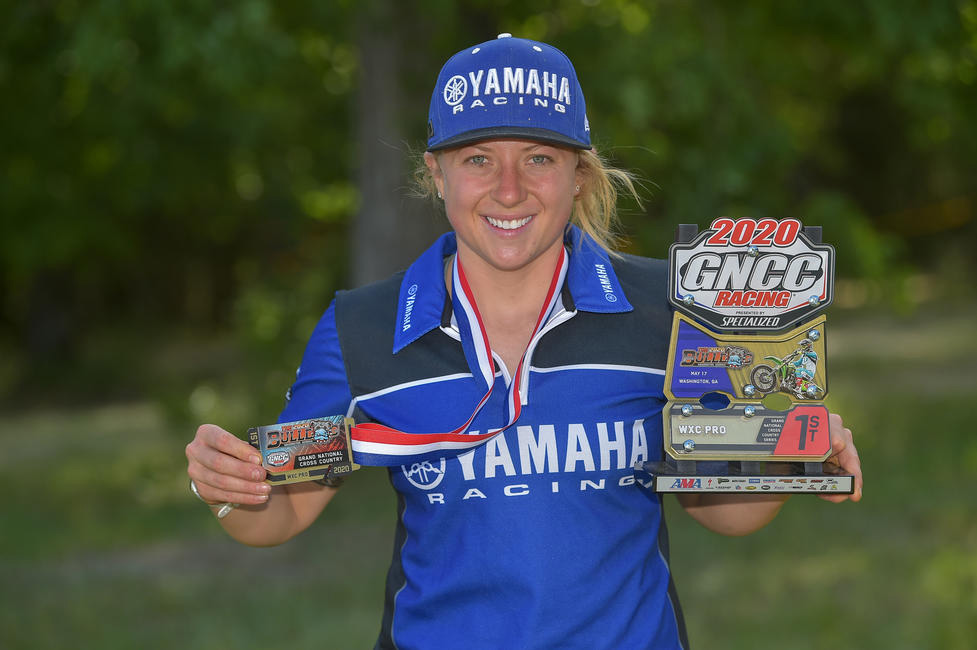 In the WXC class, Becca Sheets continues to set the pace this season on the Yamaha. Earning herself a fourth overall win at the Bulldog GNCC, Sheets finished ahead of Tayla Jones who had to battle her way through the pack pushing Rachael Archer into a third place. Jumping off the line first and grabbing the holeshot, Mackenzie Tricker had to retire out of race winning contention on lap two with a broken clutch. 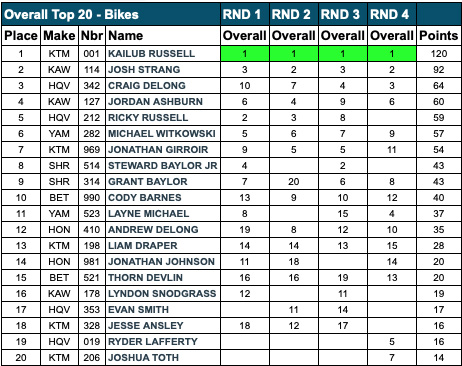