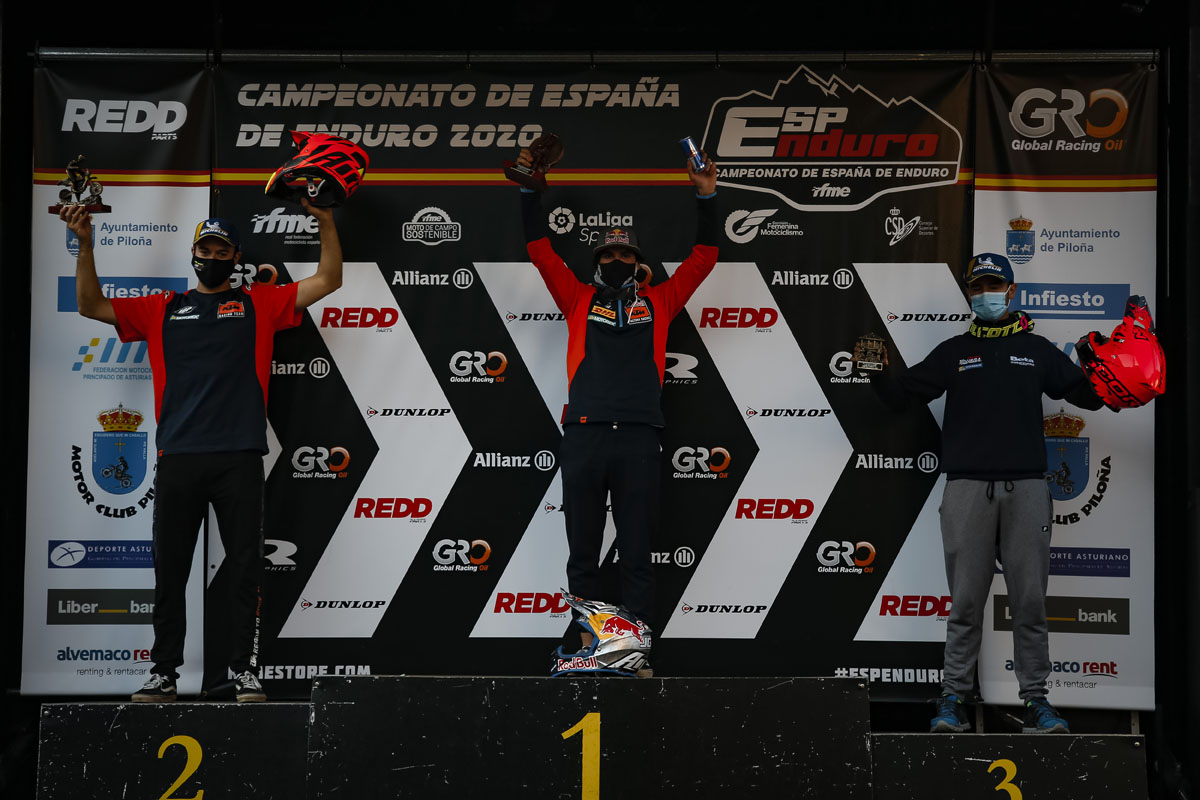 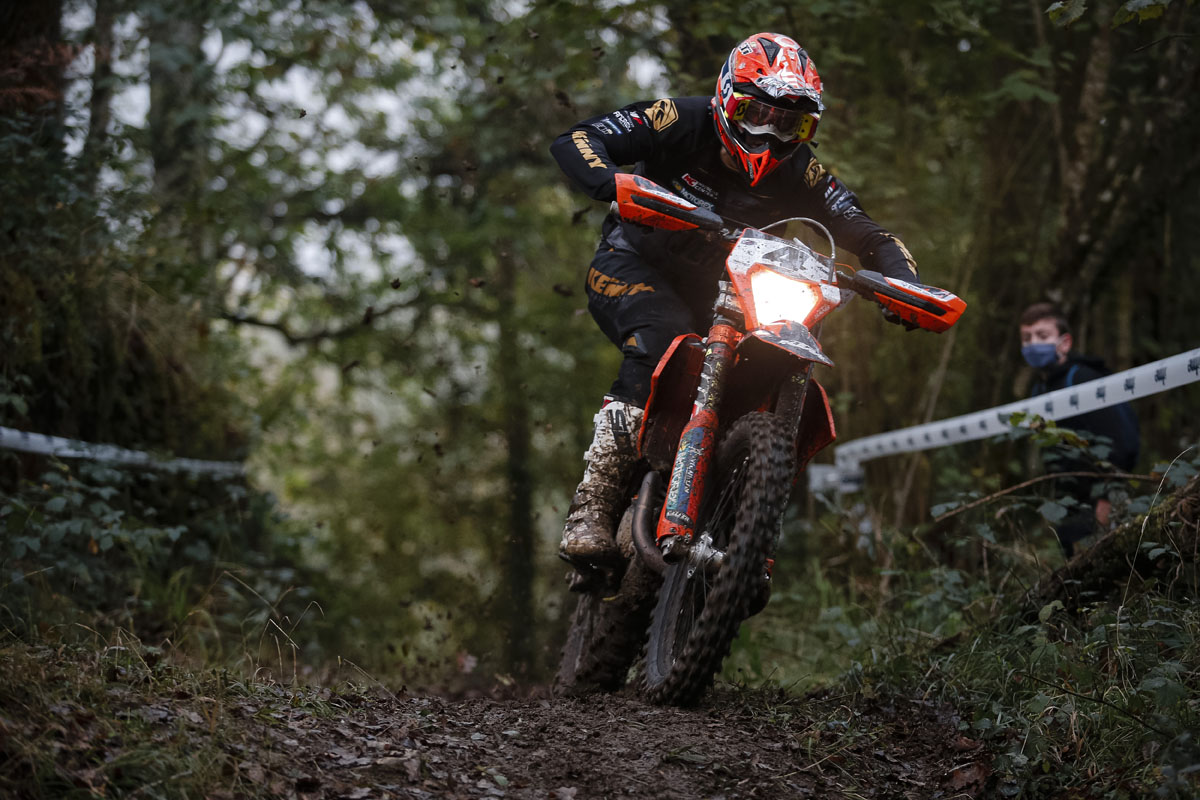 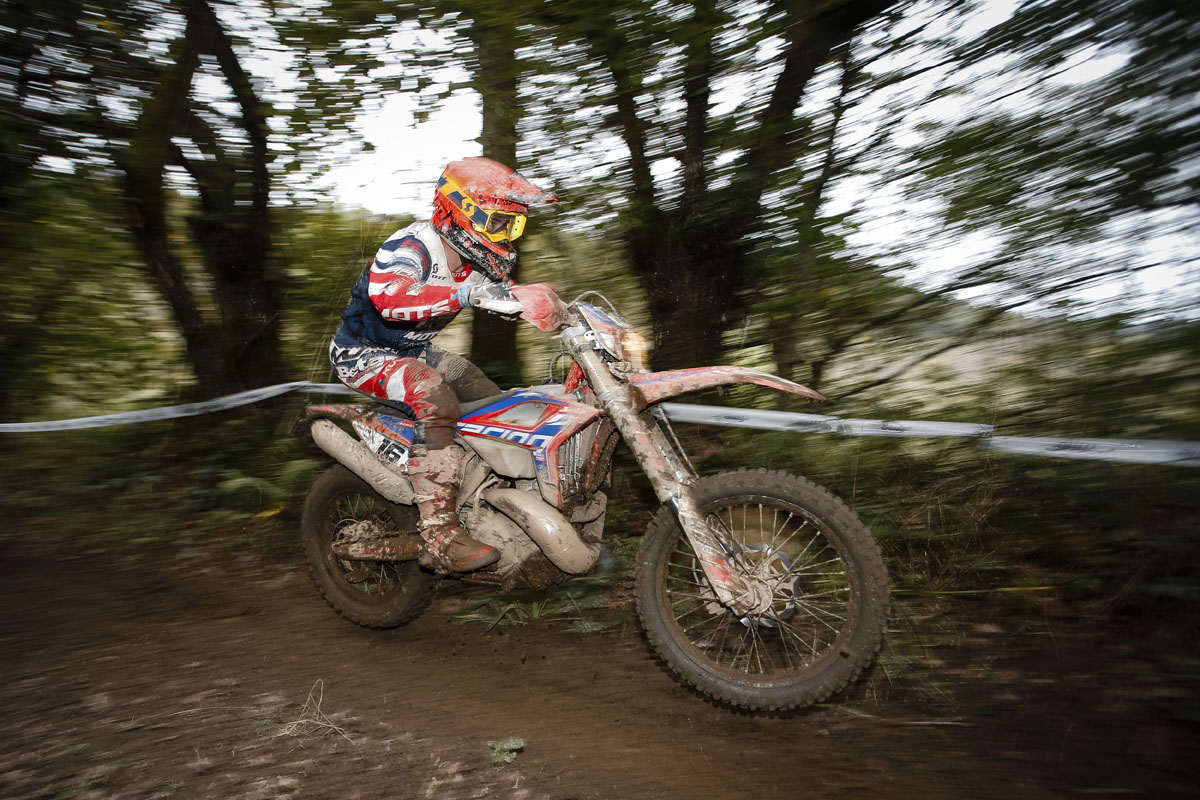 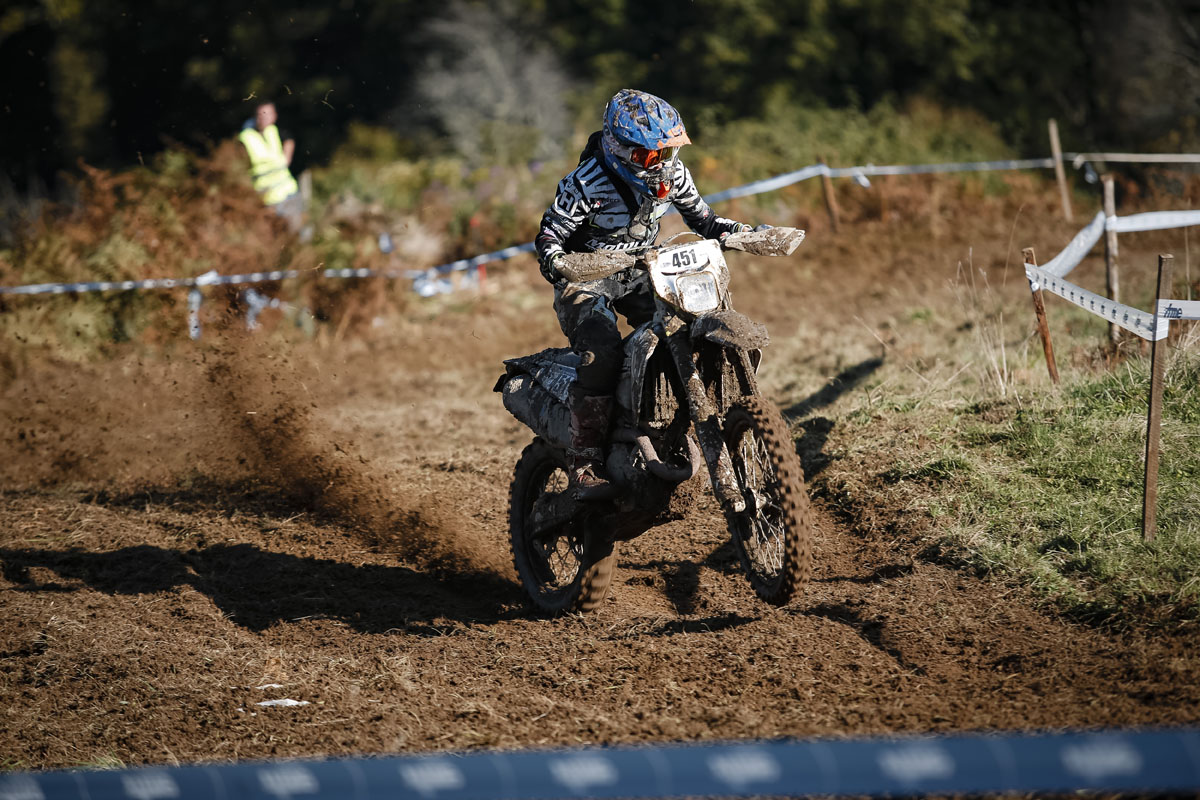 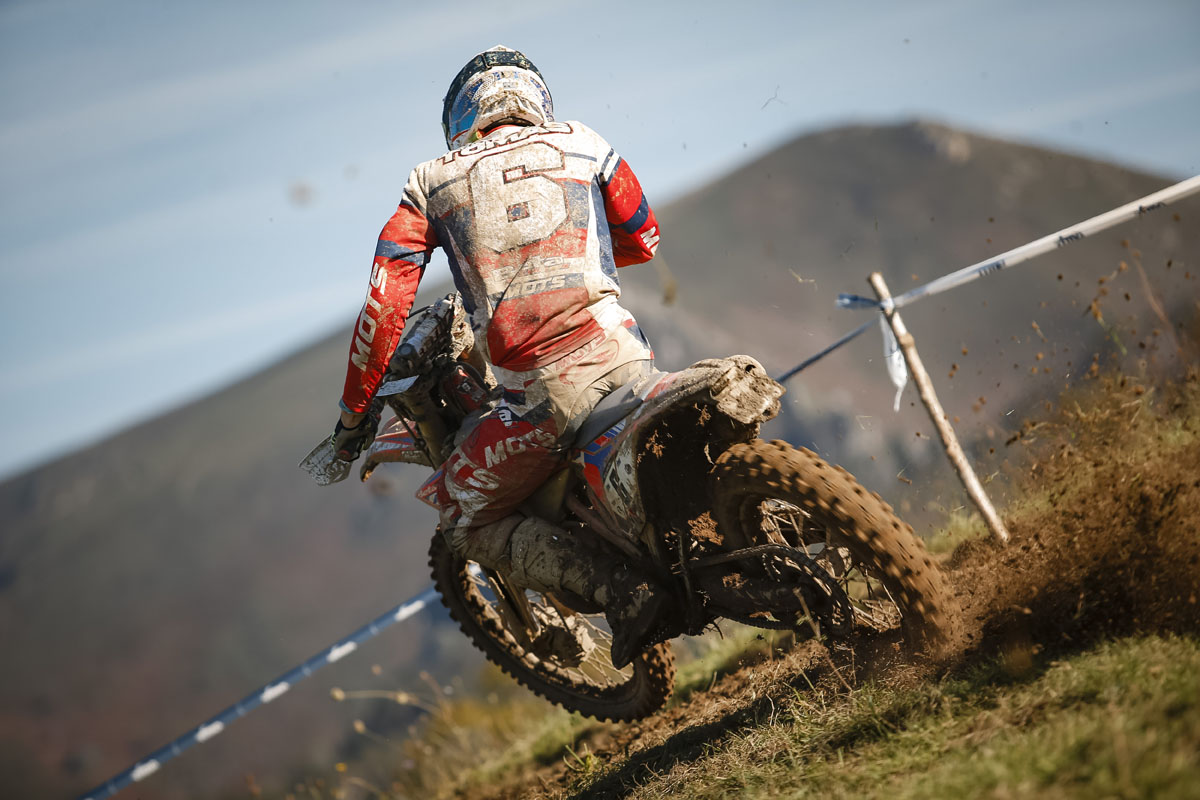 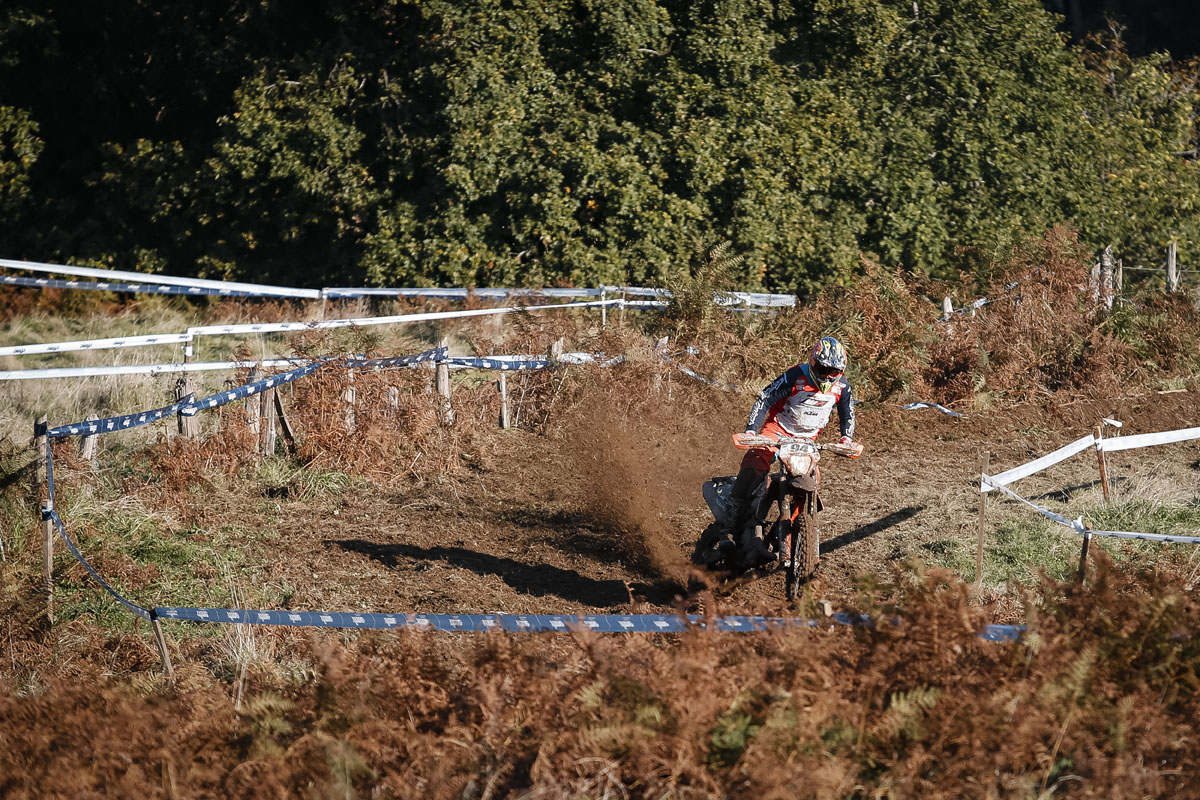 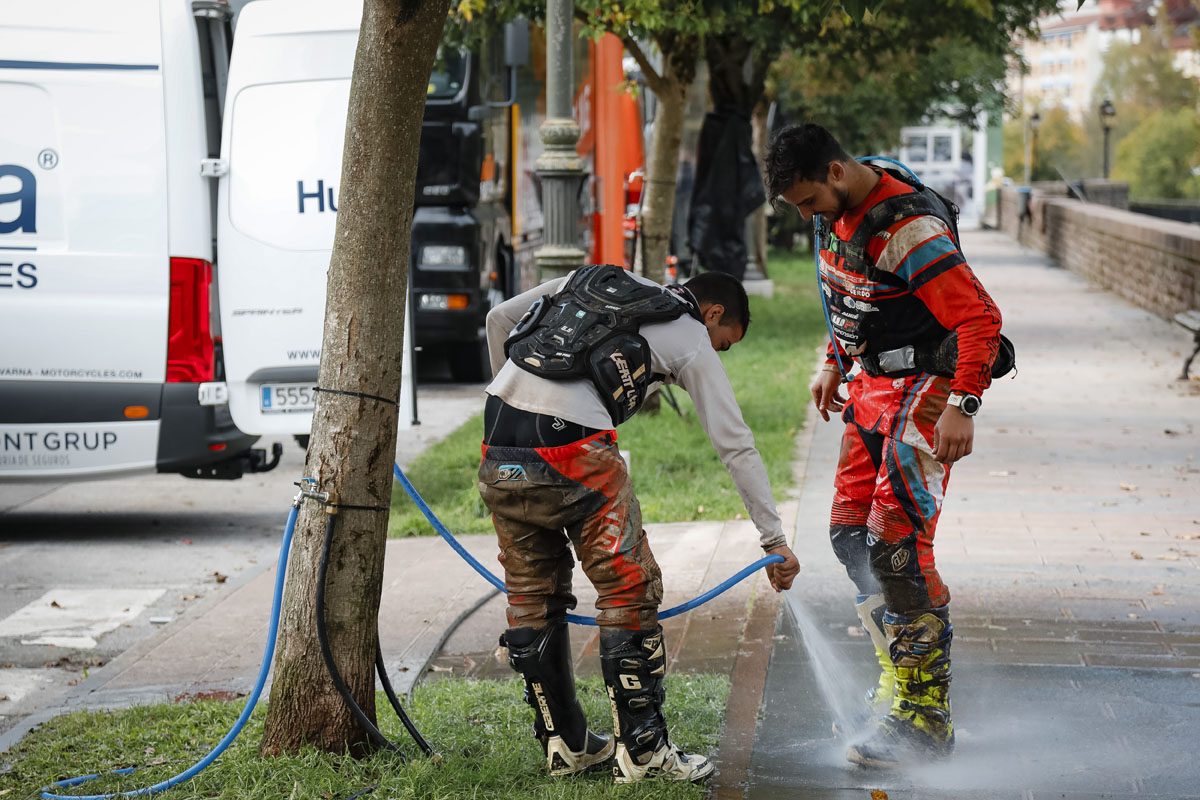 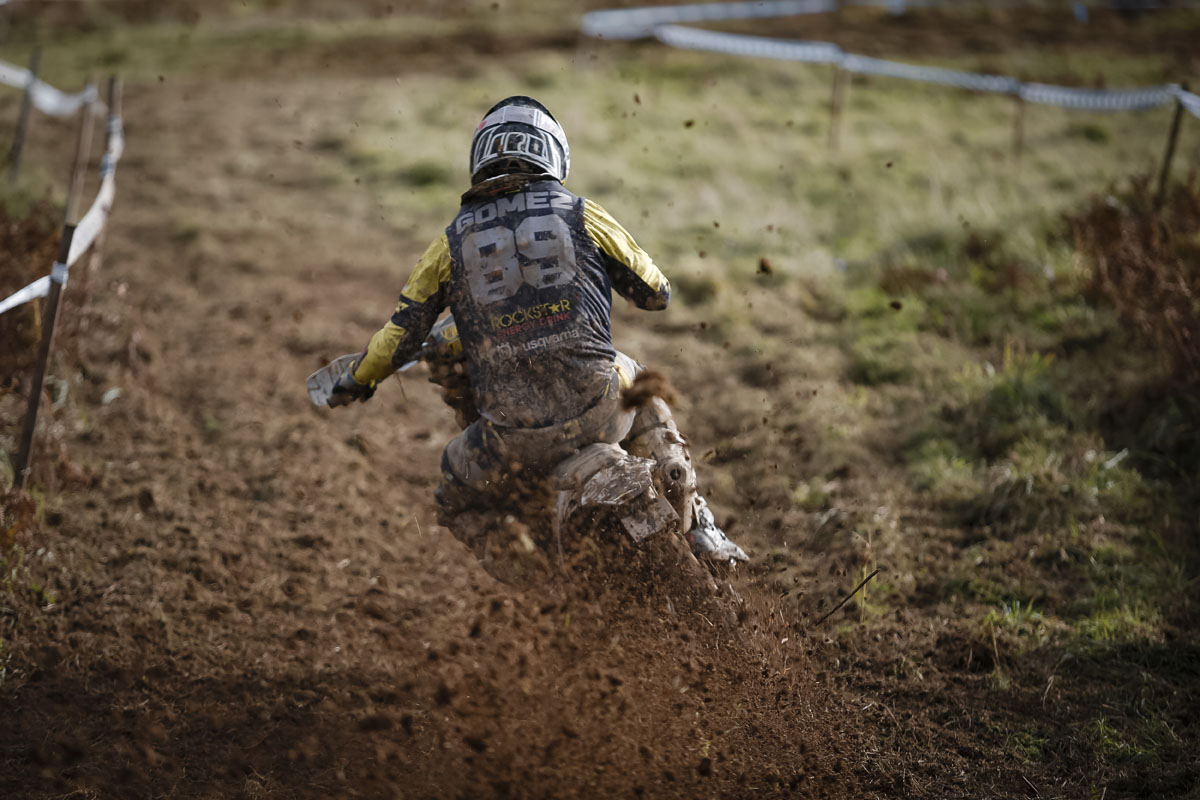 Josep García didn’t just take his Red Bull KTM Factory Racing to a win at the Infiesto round of the 2020 Spanish Enduro Championship, he annihilated the opposition with a combined victory of over five minutes across the two days – with just one event to go García has his eyes on the title.

Two weeks after the Spanish Enduro Championship returned to action after its Covid-enforced break – where Jaume Betriu took the overall win – García was unrivalled across two tough days of Iniesto mud. The KTM rider won the Scratch and E2 class with Pau Tomás and Marc Sans sharing the victories in E1 and E3 respectively, Mireia Badia in the Women’s class and Adrià Sánchez in Junior. 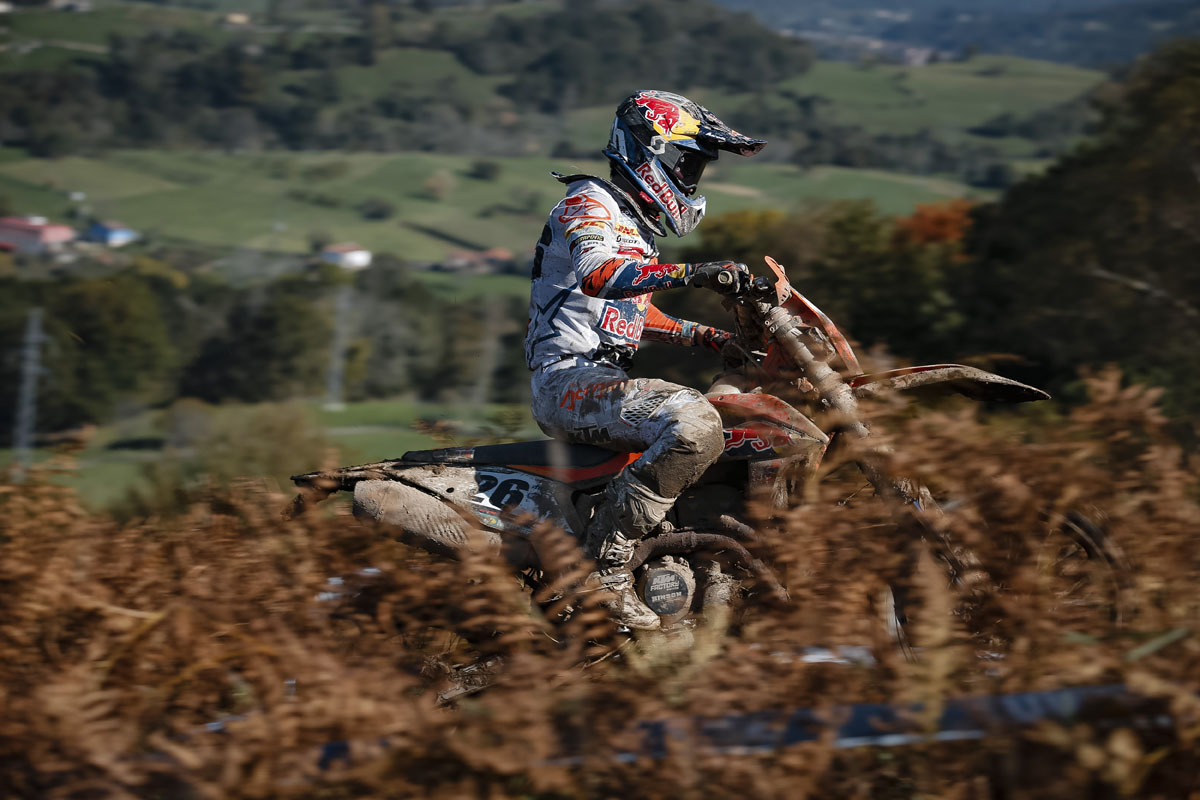 García was a level above his rivals in super muddy Enduro and Extreme tests and with a Motocross test on grass also playing into the traditional enduro specialist's hands. The end result of over three minutes clear of Cristóbal Guerrero on day one and one and a half minutes over Marc Sans on day two added up to a mighty 5:12.48 combined winning margin for the weekend.

The long Enduro test – which was taking upwards of 14 minutes for the fastest to complete – proved the deal-breaker for every rider hoping to challenge García who stole chunks of time as big as 30 seconds to grow his impressive margin.

“I have taken 100% advantage of this week and a half that we had since the Cabanes race (previous round),” explains García, “both riding and training at a physical level and the result says it all: the effort has paid off!

“I am not fully recovered yet, since I still lack a bit of mobility and strength in my hand, but we are on the right track.”

Marc Sans and Cristóbal Guerrero were the best of the rest this weekend and took to the Scratch podium after solid performances in the E3 category and with Cris still recovering from a broken finger.

Pau Tomàs breaks the streak of the Navarro brothers in E1 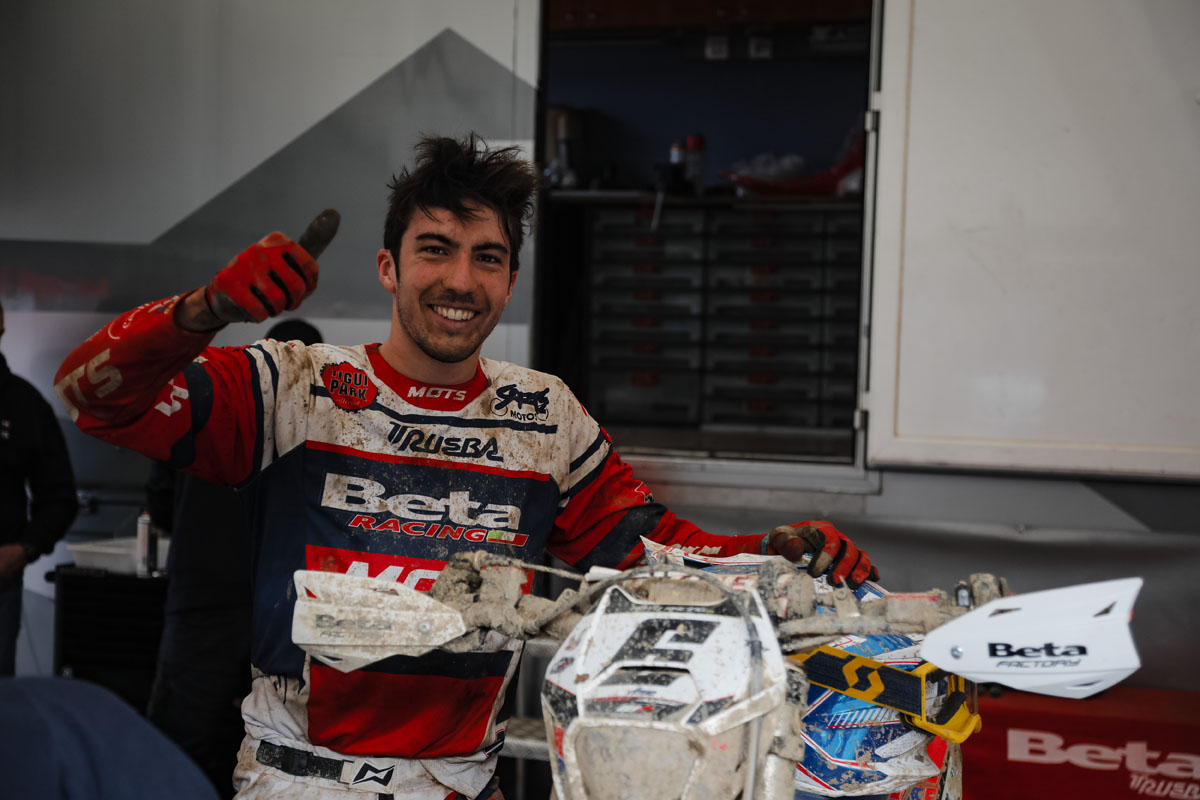 Beta Spain’s Tomàs took the E1 overall win by 28 seconds on Saturday but only by a tenth of a second on Sunday to mark his first career senior class win in E1. “The first day there was a lot of mud and it was difficult for me to get up to speed, but it was a day where we all made mistakes and I was the one who made the least mistakes,” said Pau. “On Sunday I had a better rhythm, the stages dried a bit and I enjoyed the tests. We were fighting Kirian and Sergio Navarro until the last special and at the end, today Sunday, I was able to win by one tenth.”

Kirian Mirabet on the Honda and Jordi Quer on a Husqvarna completed the E1 podium which for the first time in 2020 saw neither Sergio nor Alejandro Navarro. Both were weighed down by the falls in the conditions with Alejandro particularly having an ugly crash in the Extreme Test where he almost fell into a river. 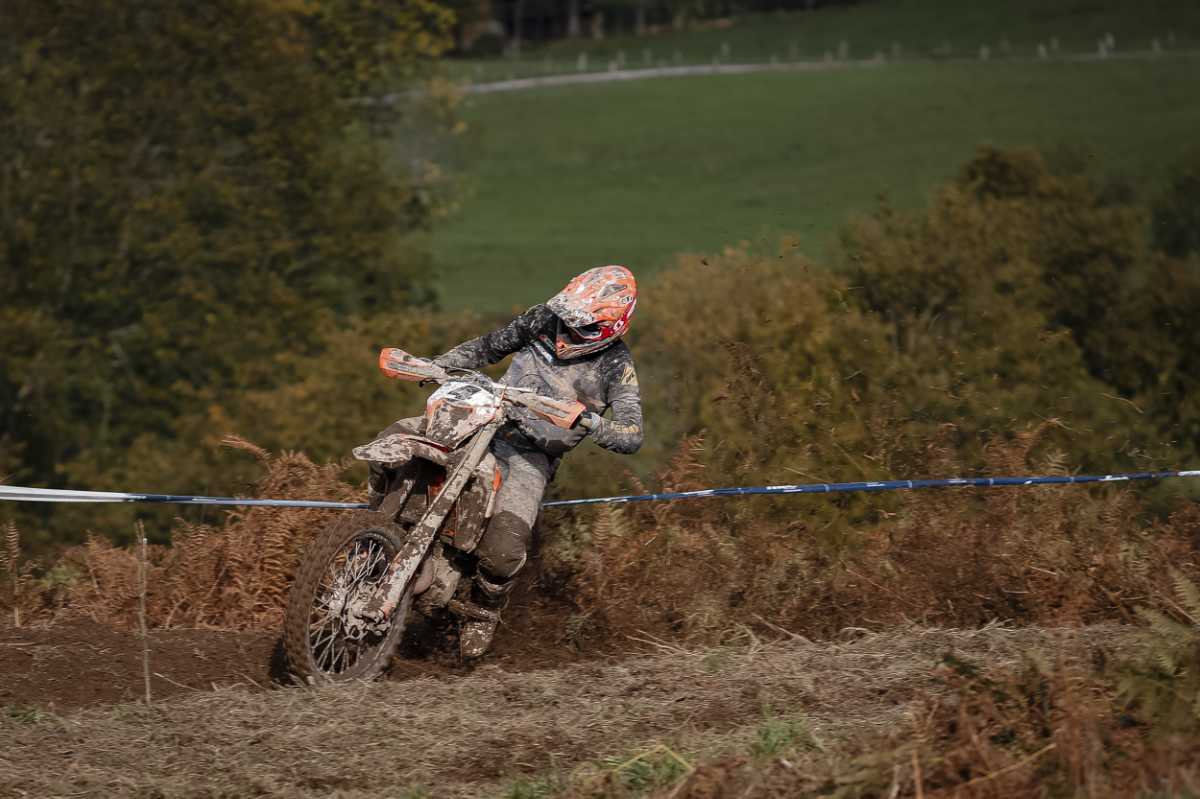 “I’m very happy with the result, it has been a good weekend,” said Sans. “The truth is that I did not expect it, the conditions were very tough, with a lot of mud, but I have incredible feeling riding the 500.

“On Saturday I made some mistakes, I had a couple of crashes in the extreme and that meant that I will be a little further back but Sunday was a great day, winning E3 and finishing second Scratch, so I am very happy.”

The KTM rider took the victory despite the fact that on Saturday, the fastest in the category was Cristóbal Guerrero. That of Beta, 20 seconds behind Sans after the sum of the times of both days, finished the race satisfied with his pace and to return to the podium. While Jaume Betriu, winner of all the tests in the category until this weekend, was suffering from intestinal illness and had to settle for third position. The truth is that he had no strength left for more, although he did score some valuable points in the fight for the championship.

Bernat Cortés and Oriol Mena completed the top five in E3 class which saw Enric Francisco withdraw on Sunday due to a crash. The Sherco rider, with a sore wrist and only two weeks before the next round of the world championship, preferred not to risk further damage.

Adrià Sánchez won the Junior Open after winning both days ahead of Julio Pando while Mireia Badia, after winning the Women's category on both days in Iniesta, is the virtual 2020 Champion.

The 2020 Enduro Spanish Championship will have a fourth and final round in Manresa, on December 6. 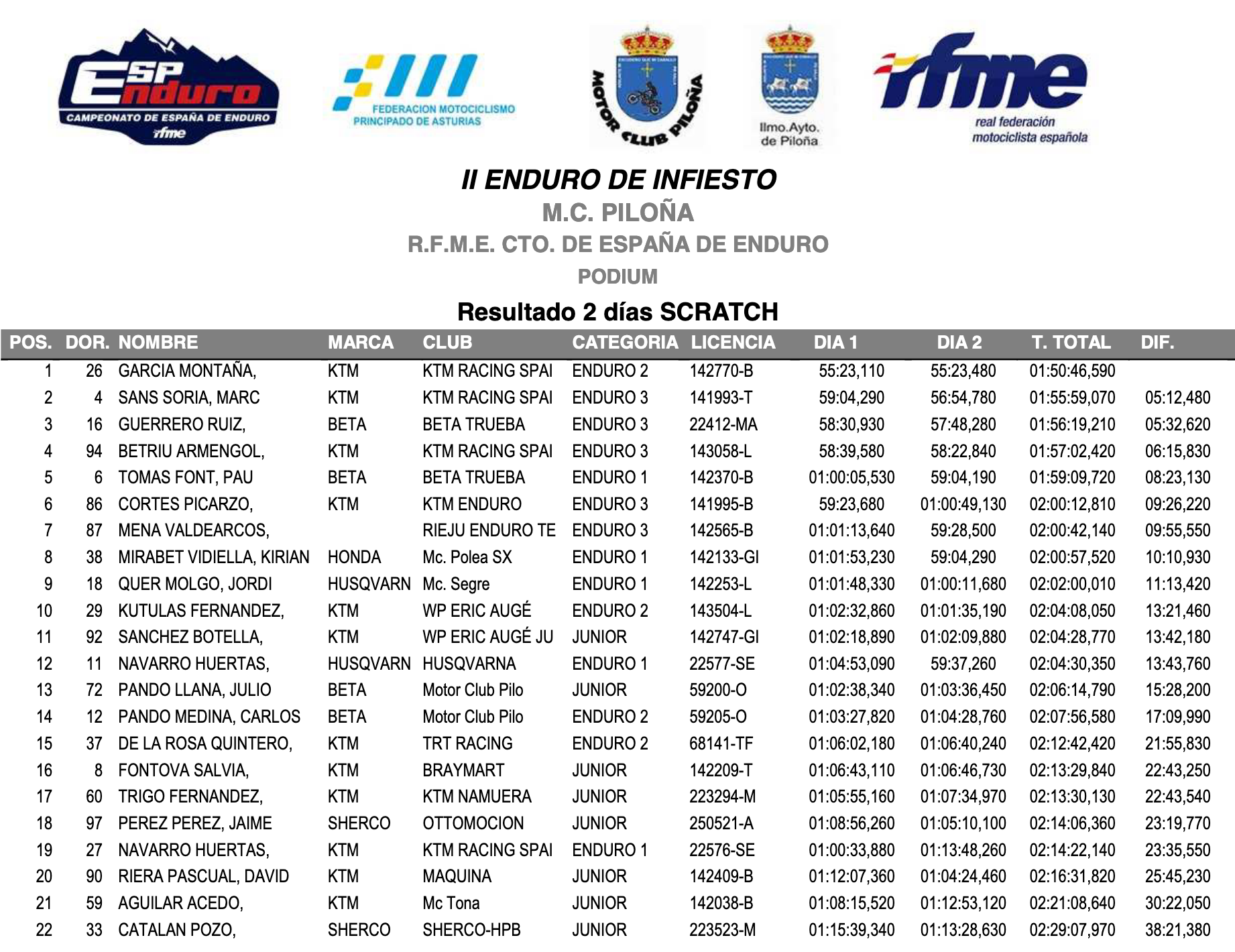 Full Results for all classes: RFME