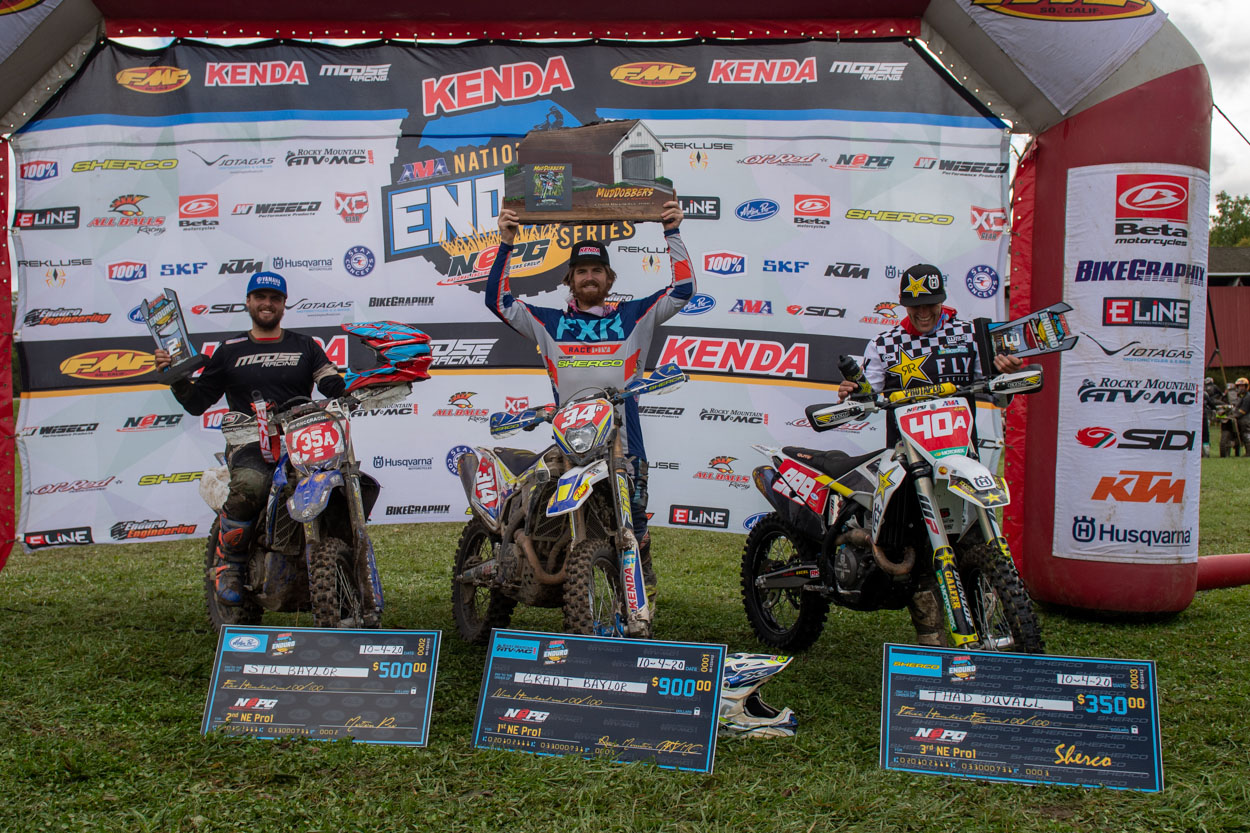 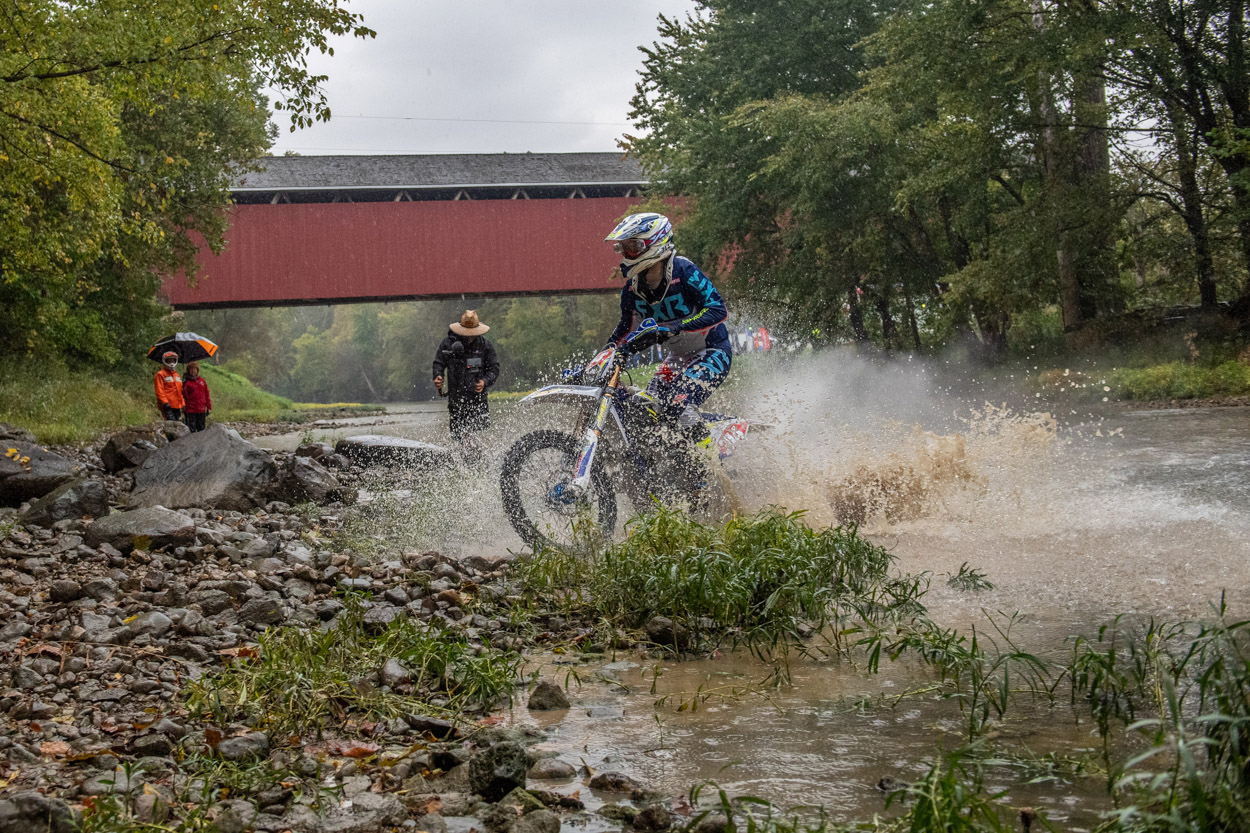 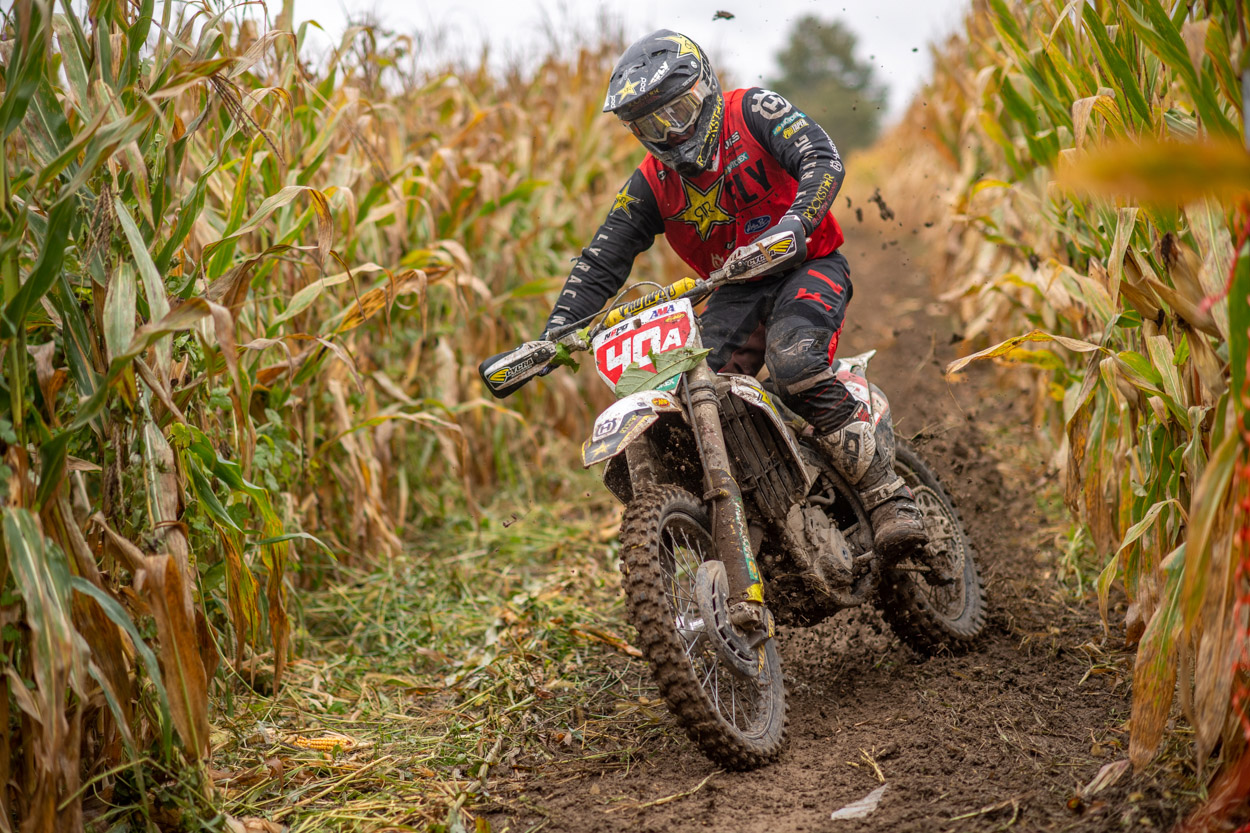 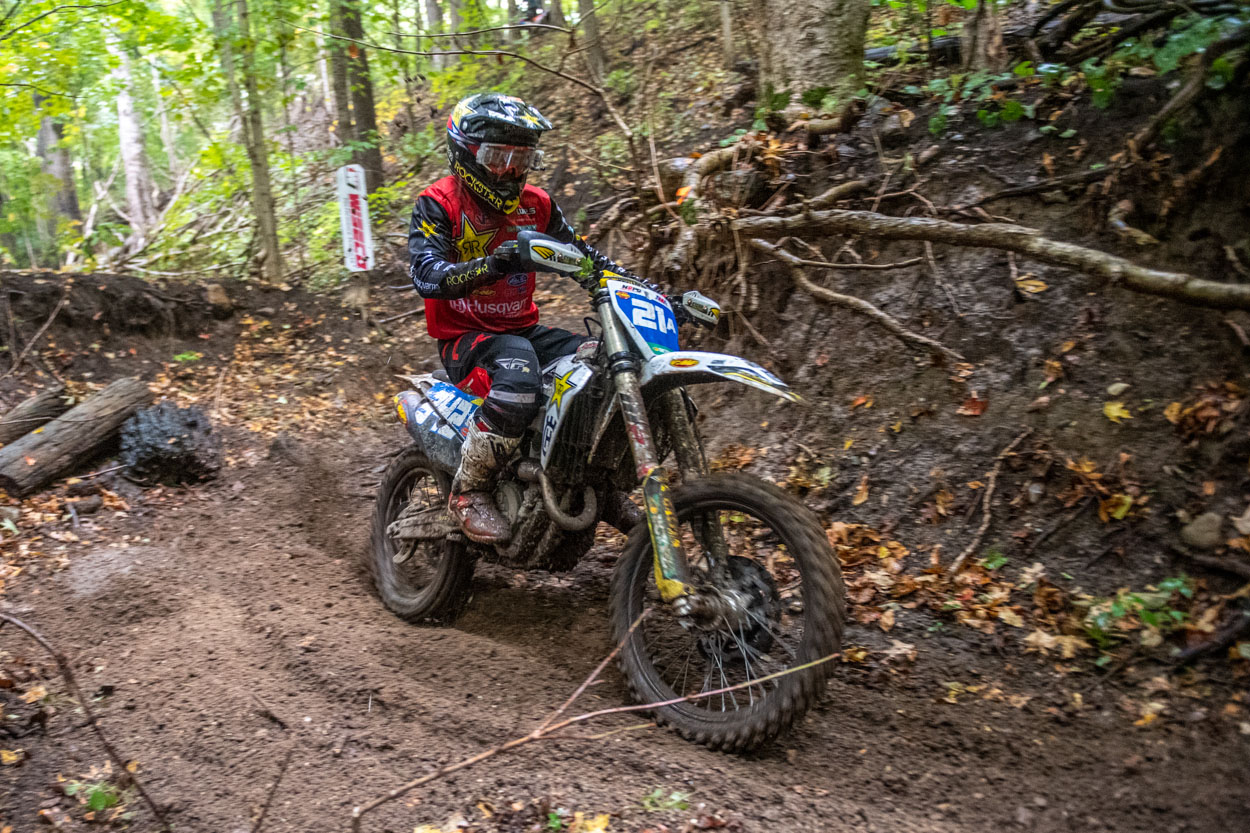 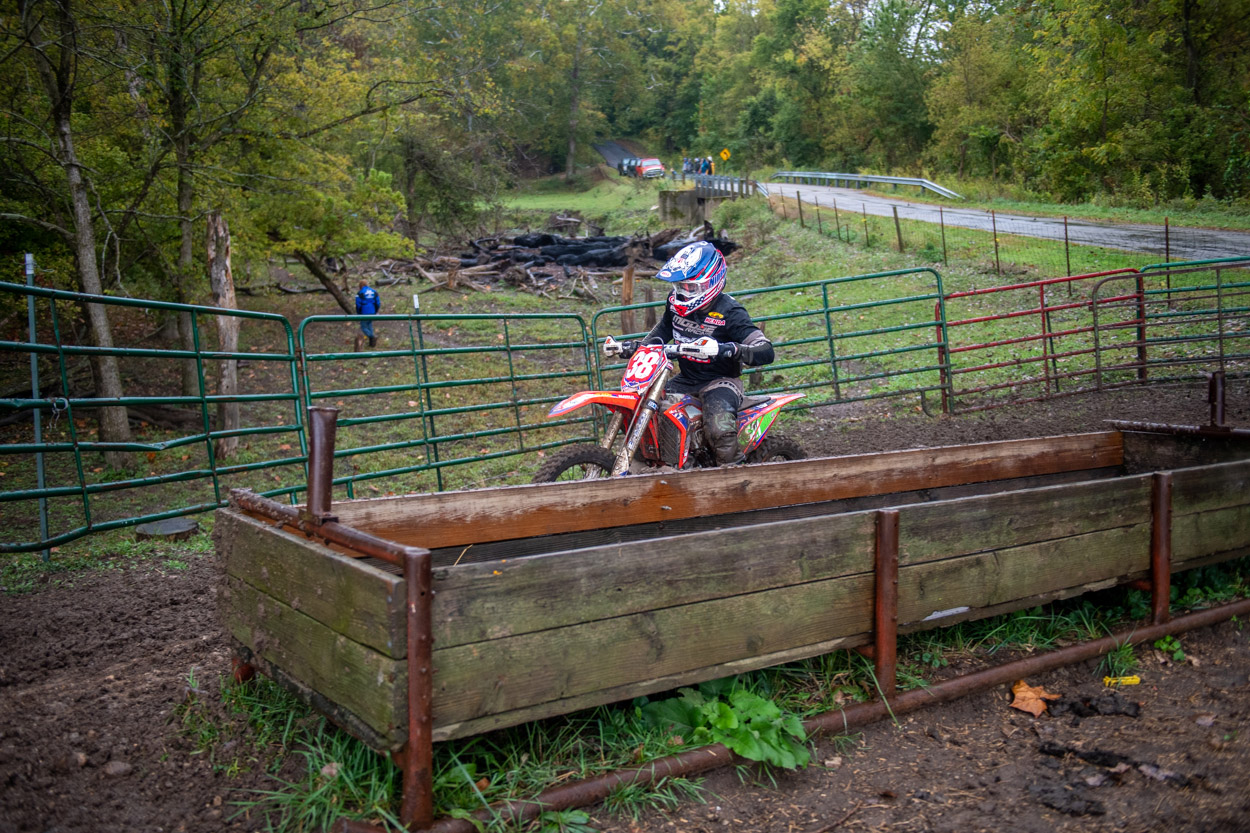 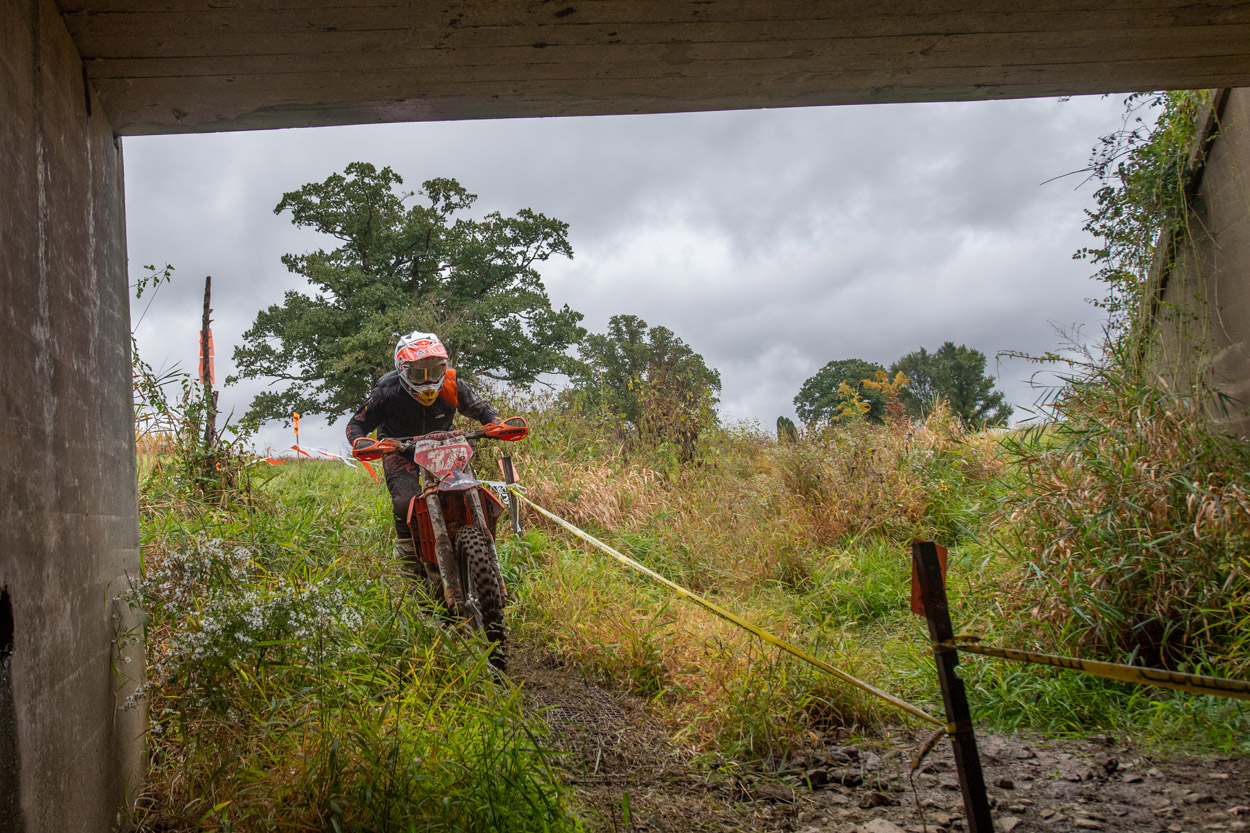 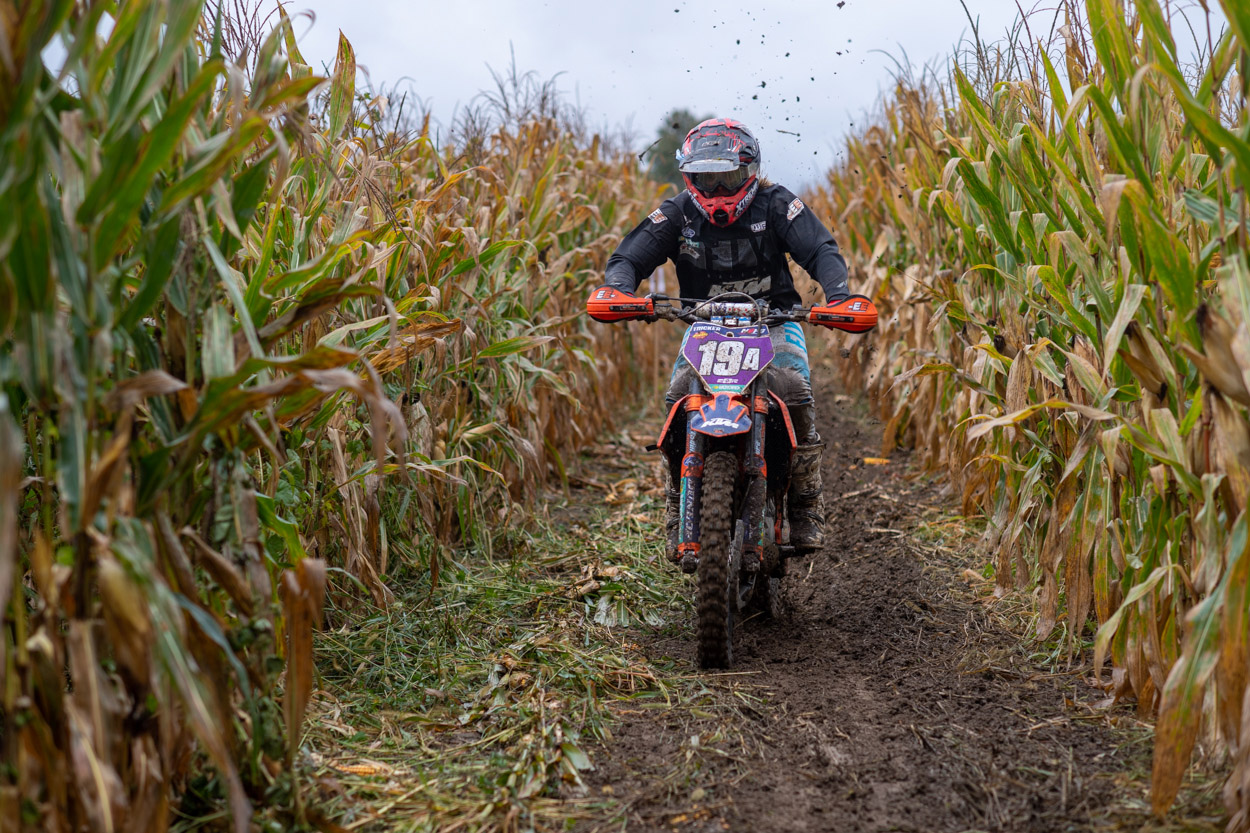 The Baylor brothers, Grant and Steward, dominated the 2020 Muddobbers National Enduro in Matthews, Indiana taking all six test wins with FactoryONE Sherco’s Grant Baylor winning the overall and taking control of the championship.

Grant Baylor came into the Muddobbers race tied with FMF/KTM’s Josh Toth in the series standings after the pair traded positions all season. But after six tests and over 60 miles of racing, Grant’s overall win by 41.834 seconds ahead of Steward saw the brothers on the podium together for the third time in 2020 and the younger brother move into a solid first place in the standings with just two rounds remaining.

“I had a good bit of confidence coming into this race just because in the past I’ve always done really well here,” said Grant. “I kind of built a gap in the first test, 20-something seconds. After that I kind of just tried to manage the race and put in good tests. Steward was right there nipping on my heels all day and I think we were within the same second in a couple tests, just super close, but it was that first couple tests that made the difference.” 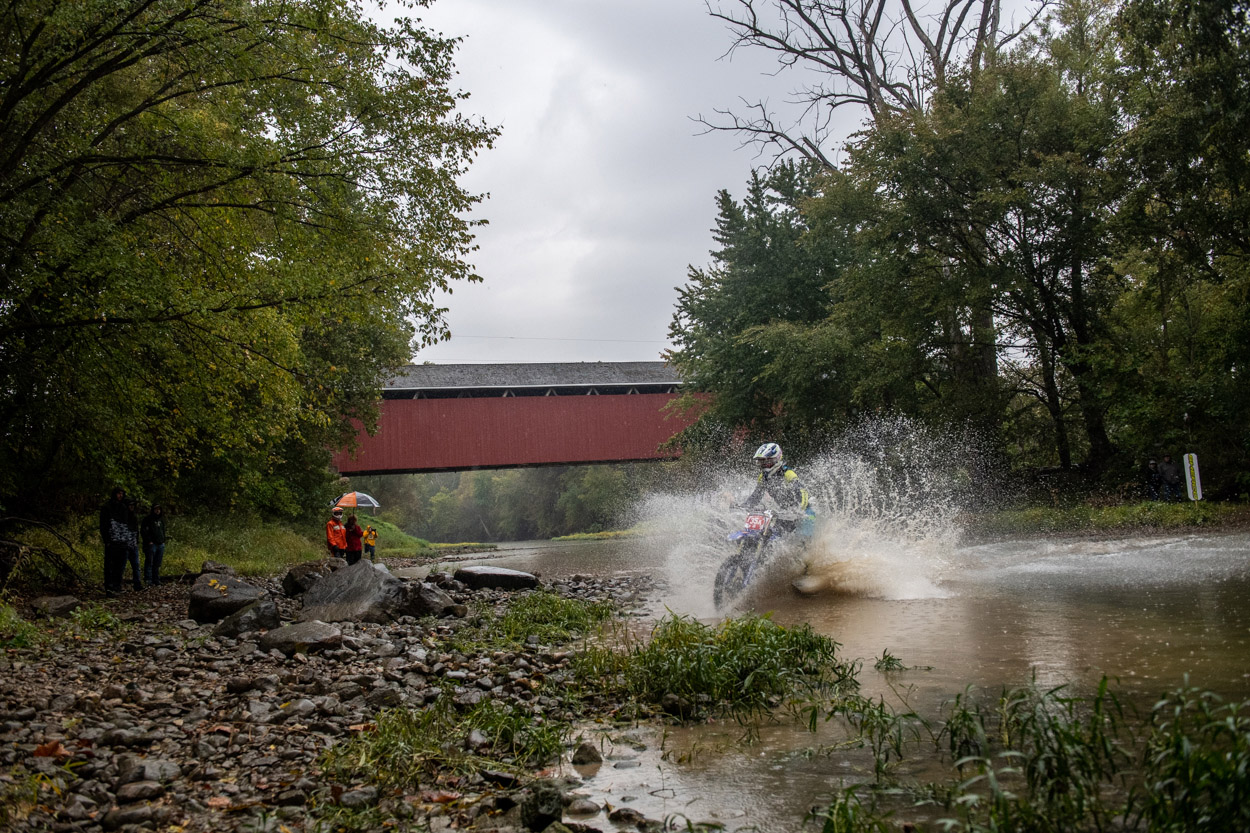 Steward Baylor again racing the AmPro Yamaha and fresh off his GNCC victories, came on strong at the finish but it was just too late to catch little brother.

“Grant has always been strong here,” said Steward. “I think I’ve only won this race one time in 10 years. It’s one of my favorite tracks but I just can’t seem to put it together. But hats off to him. He rode flawless all day.

“It was everything I had in that last test. I was like, I definitely crushed him, but then we came in like two tenths apart. I got the edge on him in the last two, but it was absolutely everything I could. It was a good day for points. It’s putting me back closer to where I want to be.”

Thad DuVall made his return to racing after sitting out the past seven months due to injury, and the Rockstar Energy Husqvarna rider surprised himself and others with a solid third-place finish.

“I was still pretty timid with my knee and still don’t have a lot of time on the bike,” said DuVall. “I just started out the day with a fourth in the first test and just kind of got better as the day went on.

“I’m super excited to be back. I don’t think I’ve been that nervous for a race in a couple years. I felt like I was going to puke before I even started. So, to have that jitters again, it’s fun. I really enjoy it.”

After winning the previous round in Missouri, XC Gear/ Enduro Engineering/Husqvarna’s Ryder Lafferty followed up with a fourth in Indiana.

“I just I couldn’t stay off the ground,” said Lafferty of his Muddobbers race. “I had a couple mistakes that got in my way and I feel like I let third place get away, and that kind of hurt me for the overall result. All in all, it was solid. All those guys in front of me are experienced and solid so I’m happy with it. Not over the moon, but I’ll take it and move onto the next one.”

Ben Kelley had a solid ride going, but crashes in tests five and six kept him out of the top four. “I felt good in the fourth test, but then the fifth and sixth I had a few problems just trying to get the flow and then I had three crashes between those two tests,” said Kelley. “Overall, I felt like I rode pretty good and ended up fifth for the day.” 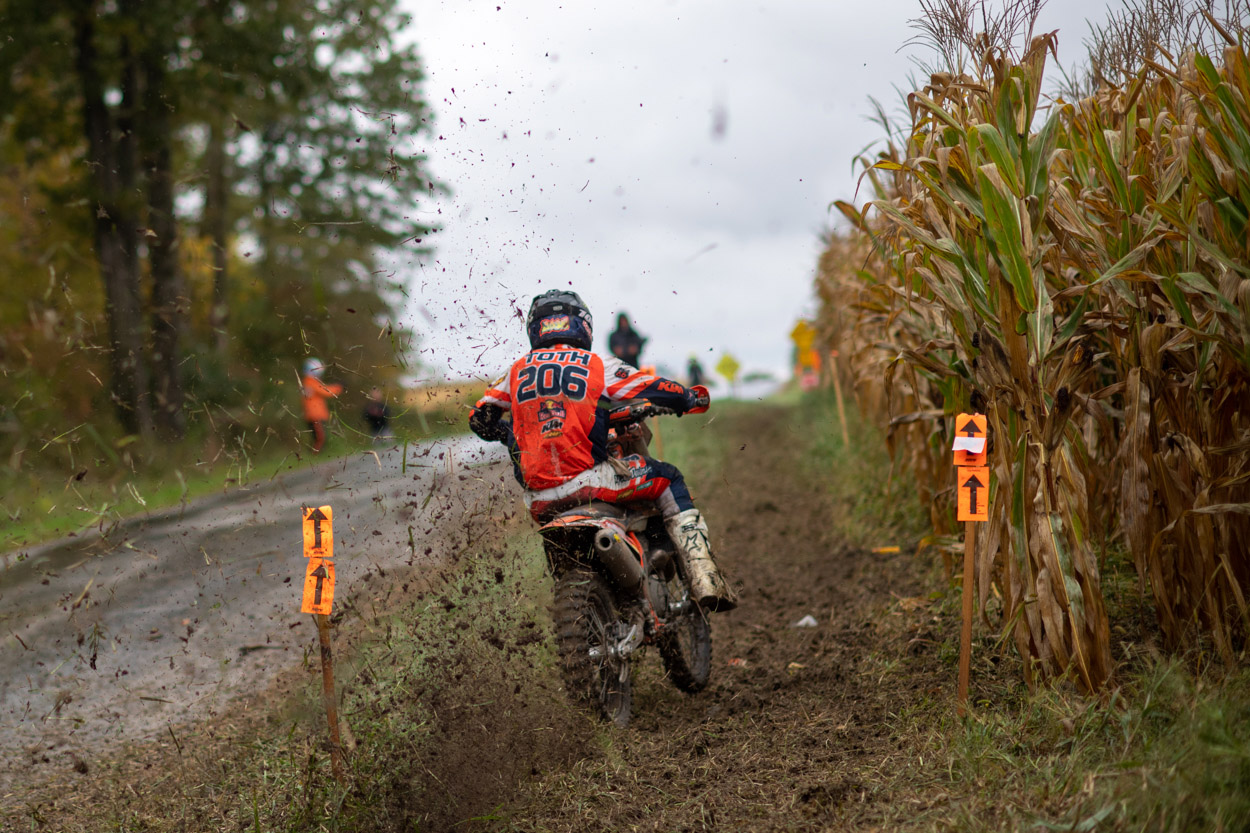 FMF/KTM teammate Josh Toth came into the race a bit banged up after he broke his ring finger in a nasty crash at the previous round in Missouri. Toth had surgery on the finger just 12 days before the Indiana race, and, naturally, was not in top form. A few big get-offs in the first, second, and third tests, complicated matters, however, Toth managed to fight his way to P6.

“I got a plate put in my finger and I think seven or eight screws to hold it all together after the Missouri race,” said Toth. “The swelling just went down the last couple days and fortunately I was able to make a homemade splint to hold it together and it really helped out today. But as expected, it was sore going into the race.

“It just really limited me and I was kind of uncomfortable on the bike at first, but honestly halfway through the tests I started feeling a little bit better. The adrenaline starts going and I didn’t feel it too bad but the moment I went through that finish check, the transfer, I could have cried, just the bumps riding back.

“I just kind of salvaged what I could and rode and did the best I can and adapted to hanging on.”

DeLong on top of Pro 2 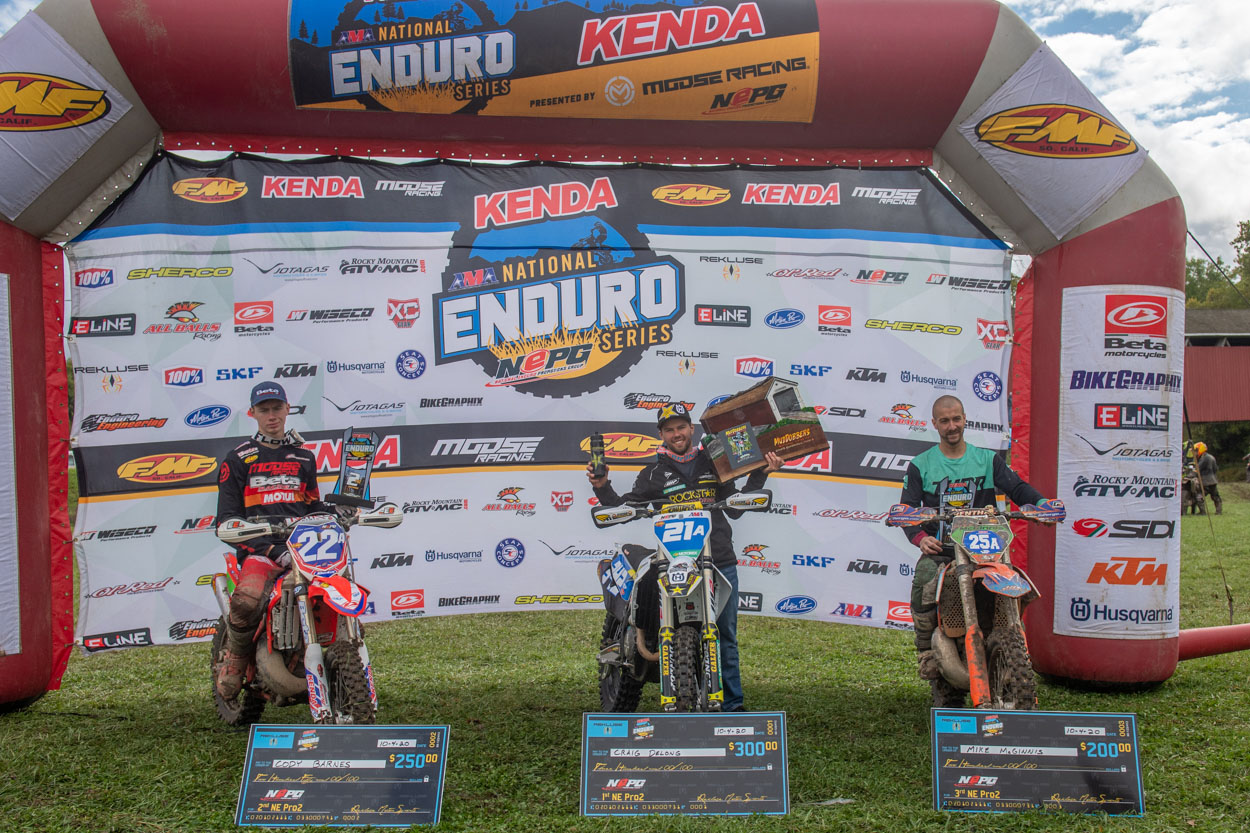 Rockstar Energy Husqvarna’s Craig DeLong was eighth overall and first in the NE Pro 2 class, finishing over a minute ahead of NE Pro 2 runner-up Cody Barnes, who was ninth overall on a Beta sponsored by Beta USA.

“Not too many mistakes,” said DeLong. “I just tried to keep it on two wheels. It was super slick in the morning with the rain and everything and that made things hectic. It seemed like I caught five or six riders at a time, so it was tough to get around them and try to make sure I wasn’t losing time to Cody. No mistakes, no crashes. I just kept it on two wheels and happy to get another win.”

KTM-mounted Mike McGinnis claimed his second podium of the season with third in the NE Pro2 class and 10th overall. 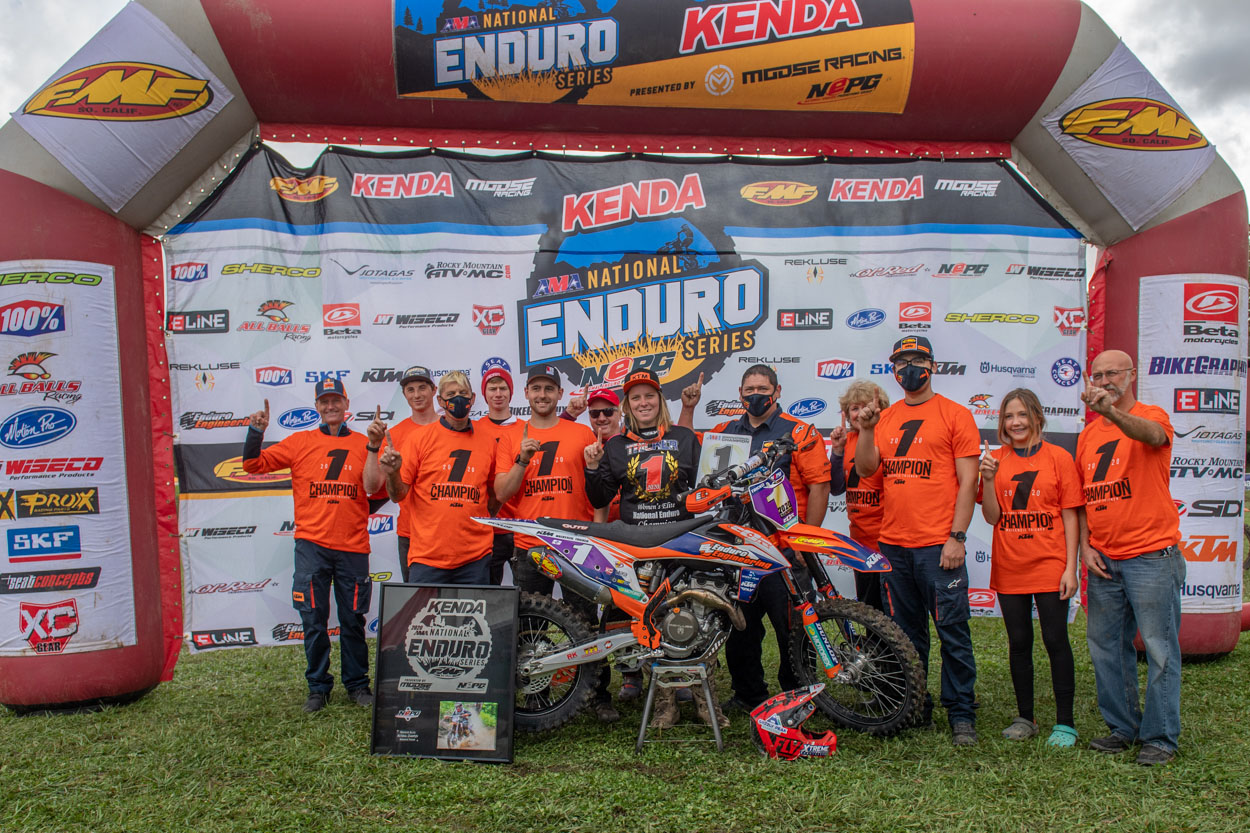 Enduro Engineering/ Mepmx/Fly/Grizzly Peak/Traveler’s Rest Speedway/KTM’s Mackenzie Tricker wrapped up the Women’s Elite title with a win in the class.

“This year has kind of evolved around my knee,” said Tricker. “It’s been messing up and hindering me a little bit, so this weekend I was a little nervous. I knew it was not going to be too hard, but I have my surgery booked in two weeks and if I didn’t wrap up the title today it would have put my surgery off another month. So, it’s great to get it done.

“Obviously the second time is always harder.” Said the now two-time champion. “I’ve been trying my hardest at every race. Sometimes things didn’t always go my way, but I’m glad to get it done again.”

Brooke Cosner meanwhile was extremely pleased with second place in Matthews. “I was dreading the beginning of the race with the rain and the cold - I was literally hating life,” said Cosner. “But I managed to get a win in test three and the last test and second for the day, so not too bad.”

Tayler Bonecutter turned in a stellar performance for third.

Tanner Whipple took the AA win ahead of fellow KTM riders Will Sievenpiper and Sam Forrester. This has been an extremely competitive division. Meanwhile, Eric Douglass (KTM) took another win in the Open A class, beating Bradyn Mohr (KTM) and Jhadyn Walker (Yam).