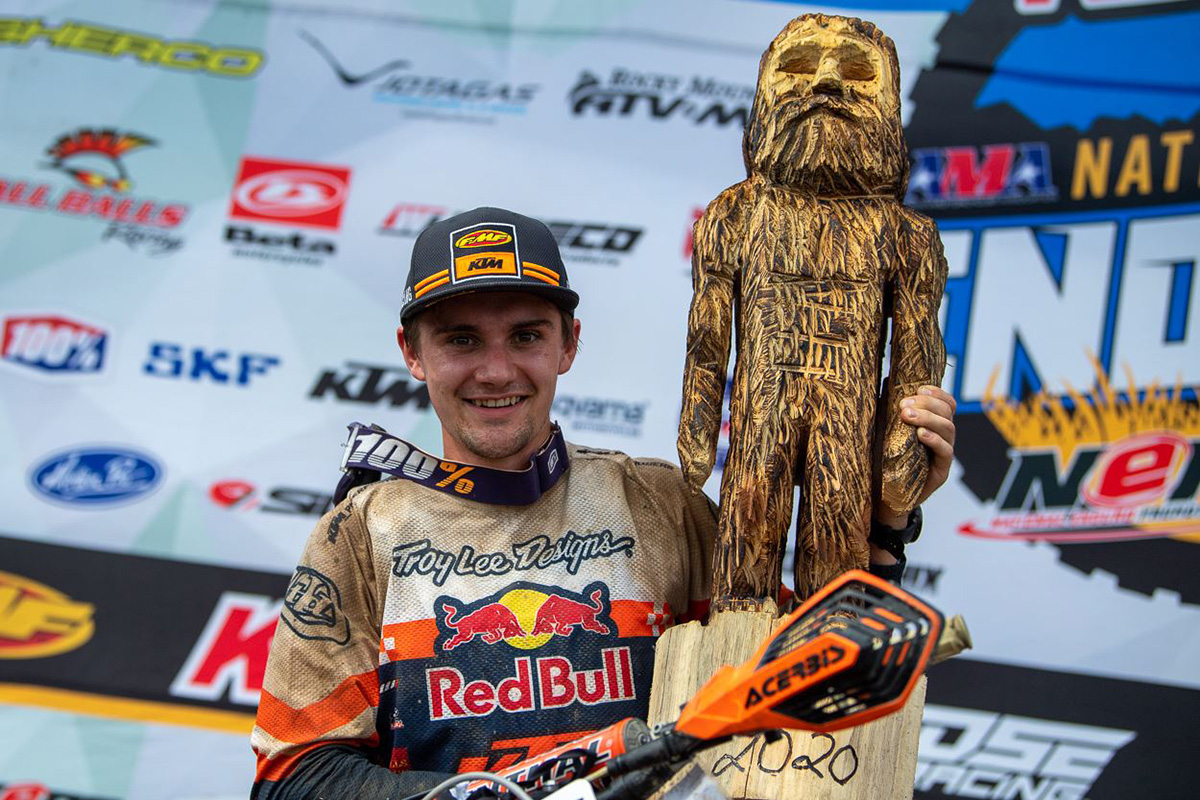 FMF/KTM’s Josh Toth claimed his third win of the 2020 Kenda AMA National Enduro Series with an impressive victory at the Grassman National Enduro in Chandlersville, Ohio.

Having missed the opening round of the 2020 season due to a leg injury, Josh Toth has bounced back with three wins and a second place to move ahead in the series standings with victory at the Grassman National Enduro – although previous points leader Grant Baylor’s mechanical issue in the opening test surely made life easier for Toth this weekend.

FactoryONE Sherco rider Baylor came into the Grassman round with a 12-point lead over Toth in the series standings, however, that lead evaporate when he was forced to push his bike out of test one after “a fluke technical issue” affected his 450. 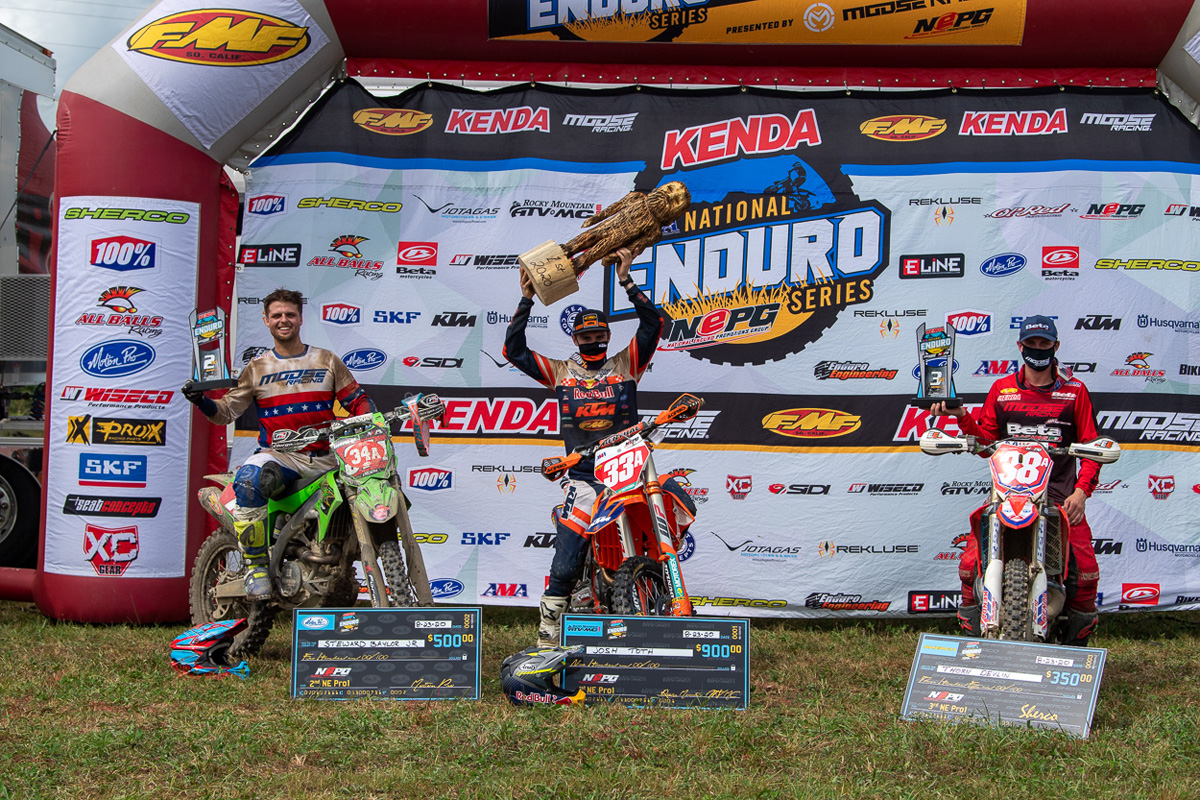 With four rounds remaining in the series, Toth feels he has the momentum he needs to finish out the season on top. “The win helps with confidence, for sure,” said Toth. “I still have to ride the bike, though. It’s still going to be tough. Today was hard. Stew (Baylor) was ripping. But battling with him and coming out on top, I’m pretty stoked.”

Stew Baylor back on the Kawasaki 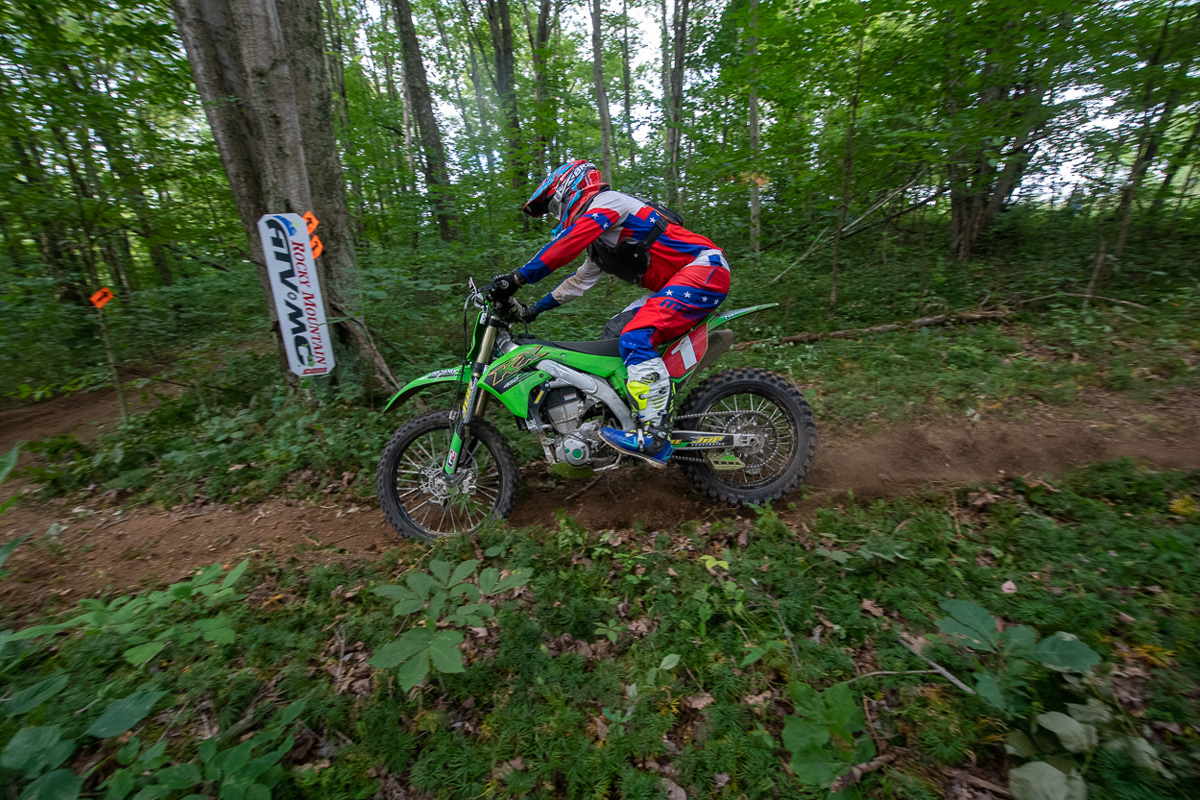 For the second round in a row, four-time National Enduro Champion Steward Baylor finished in the runner-up slot on his privateer Kawasaki KX450. Steward led the race during the early stages, but lost out to Toth in the final two tests. “It wasn’t a technical course, by any means, but every time you thought you had flow you would end up off the track. It was a really tricky track,” said Steward. “You had to really be on point. I just made a few costly mistakes. I wasn’t reading the track far enough ahead when I needed to be.”

Steward missed round two of the series to have knee surgery (plus a split with the Sherco USA team forced a lay-off from racing for several months), but is not ready to give up on a fifth title just yet. “The championship is back in sight, so that’s the goal,” said Steward. “Just two months ago, given the circumstances, we didn’t even think we’d be racing at this point. We were hardly out of the hospital. So, to be at this point and parking it on the podium on a box stock bike, I’m stoked.”

Devlin puts Beta on the box 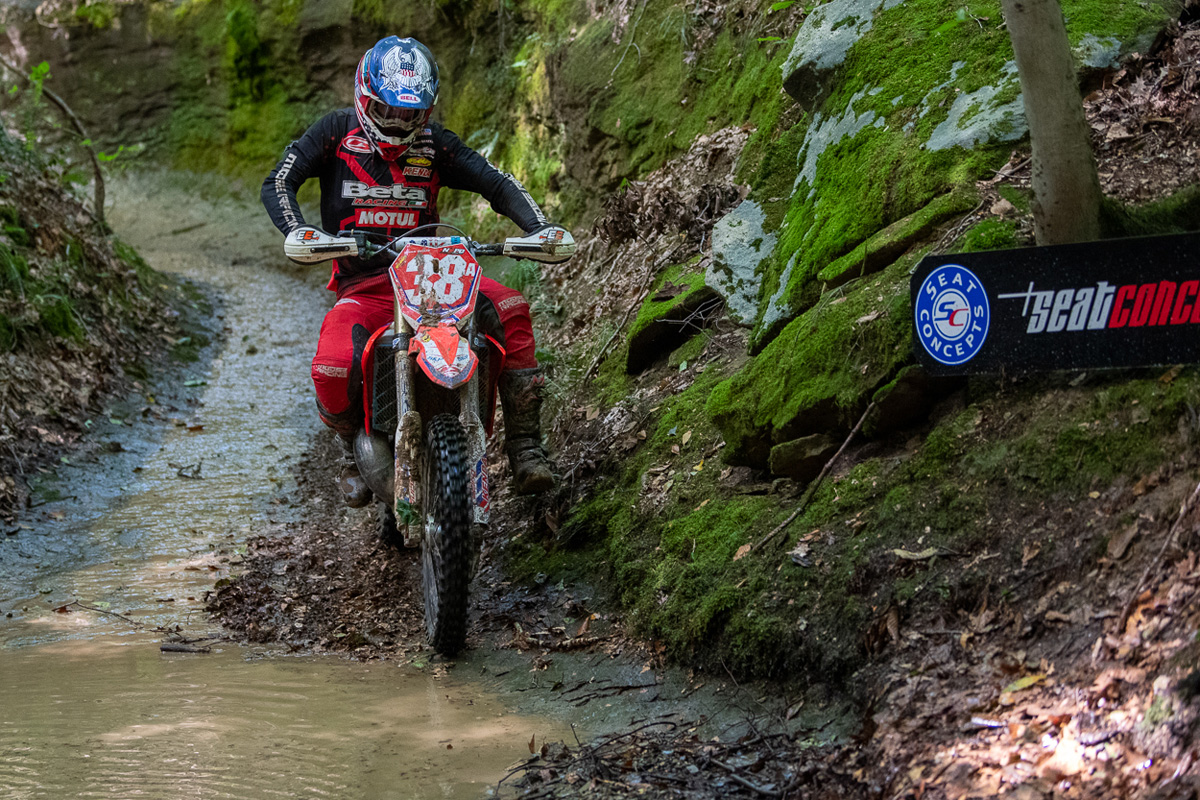 Beta USA’s Thorn Devlin rounded out the podium after turning in his best performance of the 2020 season in the Chandlersville woods. “Start to finish, I pretty much just put a day together and it felt really good,” said Devlin. “We had a pretty flawless day as far as it goes. I went down once right before the finish of a section earlier in the day, but luckily, I went into the last section with a little bit of a lead so I knew I just had to kind of ride safe and ride comfortable. I’m speechless. It feels so good.”

FMF/KTM’s Ben Kelley finished 34 seconds behind Devlin to claim fourth overall. A couple of crashes kept Kelley playing catch up for most of the day.

“I was doing pretty good the first two tests and then had a crash unfortunately in the third,” said Kelley. “I was going fast and couldn’t make a chicane around a big log and had to go over it.”

After starting off his 2020 season with a podium finish at round two, XC Gear/Enduro Engineering/Husqvarna’s Ryder Lafferty was disappointed with a fifth overall finish in Ohio. “I started off kind of slow,” admitted Lafferty. “I struggled with my bike set-up a little bit. I had a crash in the second test and jammed my wrist pretty good. Then I started figuring out the bike and got better and the times got better. Then going into that last one we were 20 seconds down. I felt like I had it. I had a good one going, a good last test, and then I got tangled up on a hill and lost some time. So it was a bummer, but it’s all good.” 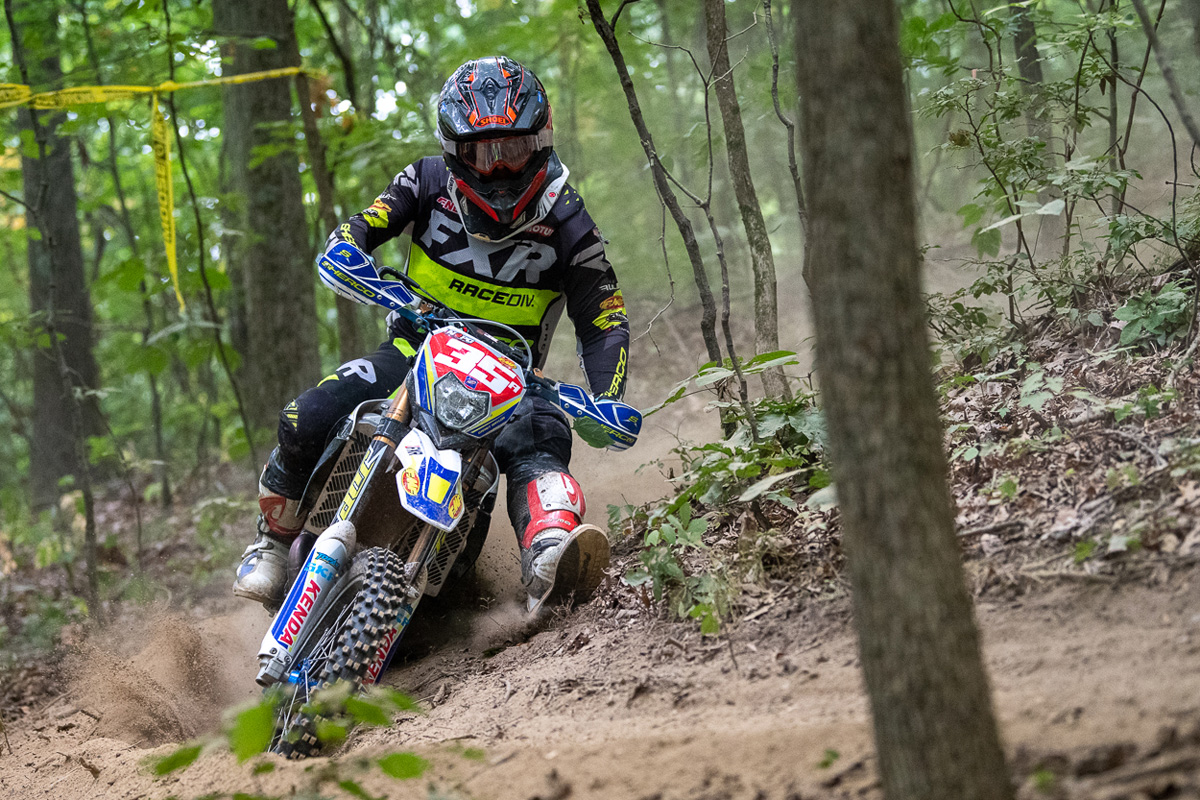 After losing over 10 minutes when his bike stopped in test one, Grant Baylor made an impressive charge in the final five tests (3-1-2-2-2 scorecard) to salvage a 10th overall finish, good enough for 11 valuable points.

With four rounds remaining, Toth sits atop the series standings with 115 points, while Grant is second with 108. Ben Kelley is third with 102 points. Steward sits in fourth with 91 points. 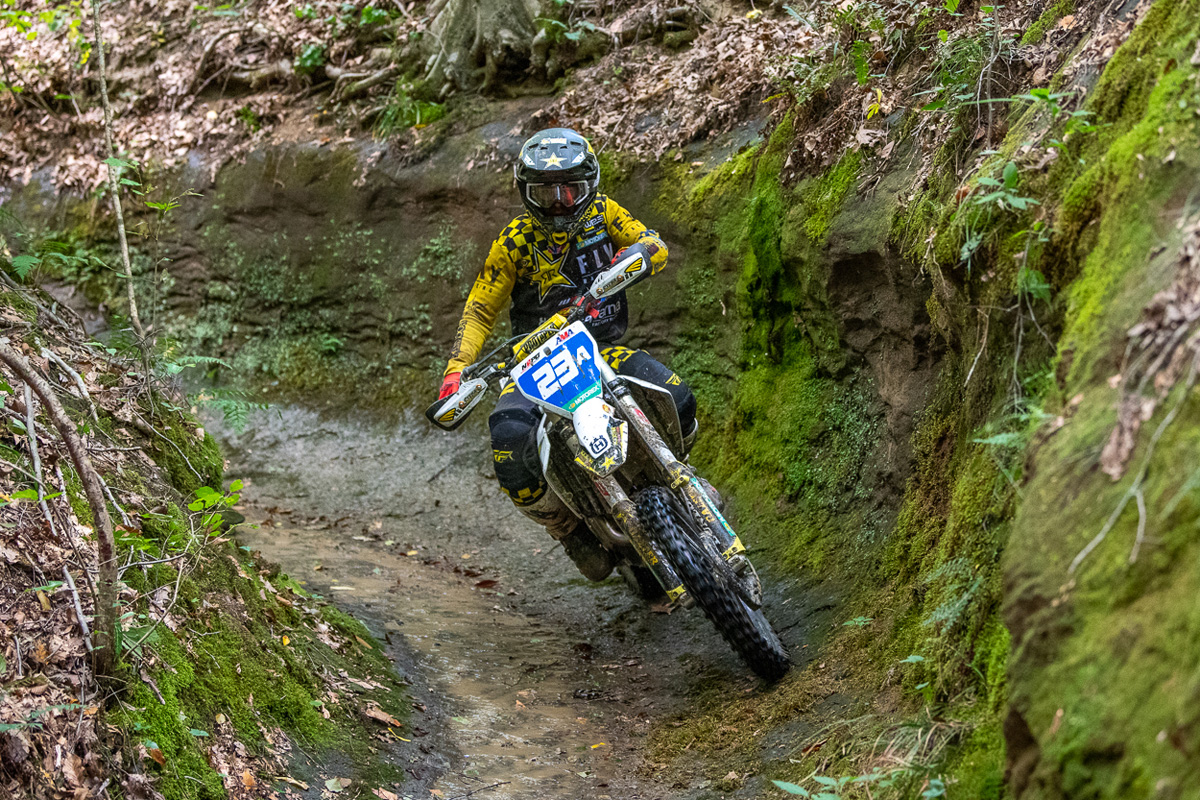 Disappointed with his performance at the Little Raccoon National Enduro three weeks before, Craig DeLong came into the Grassman Enduro with something to prove and the Rockstar Energy Husqvarna rider delivered a solid sixth overall finish, which gave him the win in the NE Pro 2 division. “I was definitely feeling a little sour after the last race,” said DeLong. “I just wanted to come out and kind of swing the momentum back my way. That’s what I did. It was a good day. It was pretty much no falls or tip-overs or anything like that. Just I blew a couple turns here and there, but all in all it was pretty much a perfect day.”

Cody Barnes was second in the NE Pro 2 class with a seventh place overall finish. The Beta USA-backed rider battled most of the day with Mike McGinnis and topped the KTM rider by 19 seconds when all was said and done. 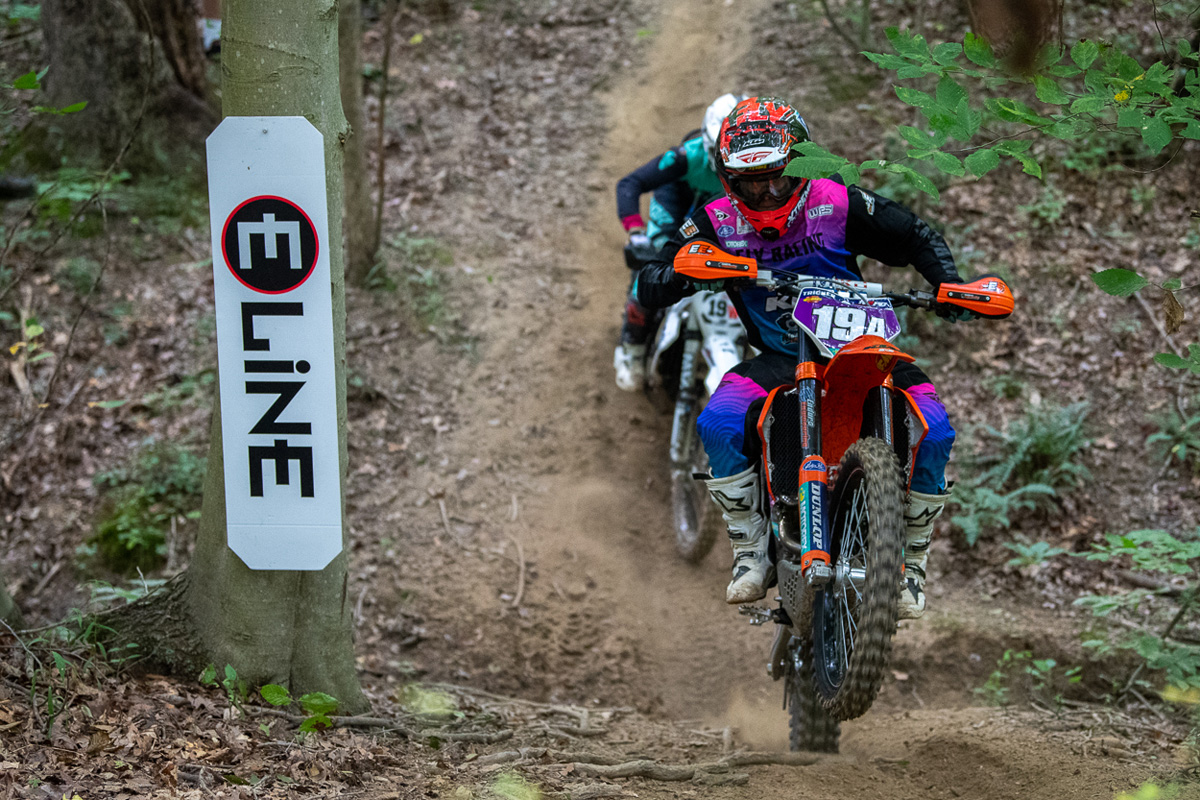 Enduro Engineering/ Mepmx/Fly/Grizzly Peak/Traveler’s Rest Speedway/KTM’s Mackenzie Tricker won two of the first three tests in the Women’s Elite class and then just managed the rest of the day to claim the win.

Korie Steede, riding a TM, won three tests and claimed a runner-up finish just 15 seconds behind Tricker and ahead of Beta USA’s multi-tasking Rachel Gutish who was solid en route to third place, while BABBs Racing’s Becca Sheets was fourth on a Yamaha.