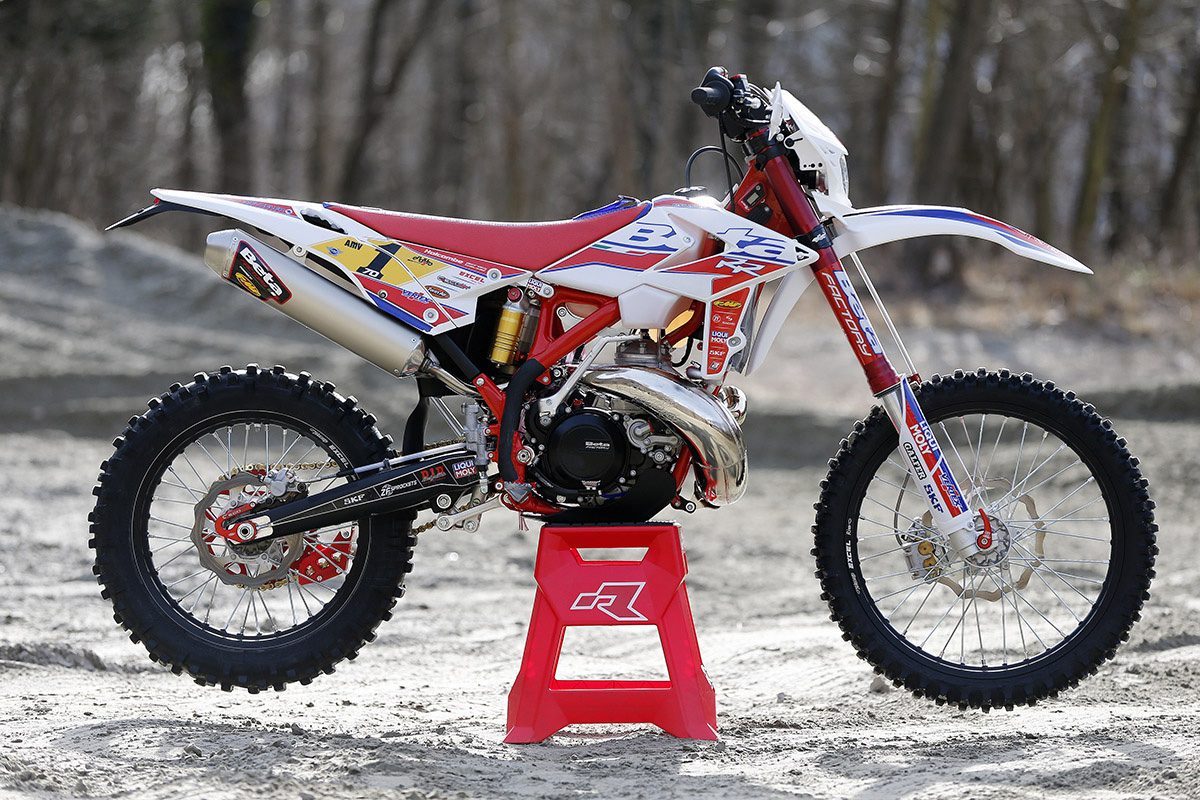 At the highest level in enduro racing we expect factory bikes to be a decent step away from their production model counterparts but Steve Holcombe says his Beta RR 300 Racing is remarkably stock.

Can you imagine saying that about the world champion's bike from any other bike sport?

To find out just how close it is to standard we spoke to the man himself, Steve Holcombe who ran us from tip to tail through the details and his own personal set-up in his own words… 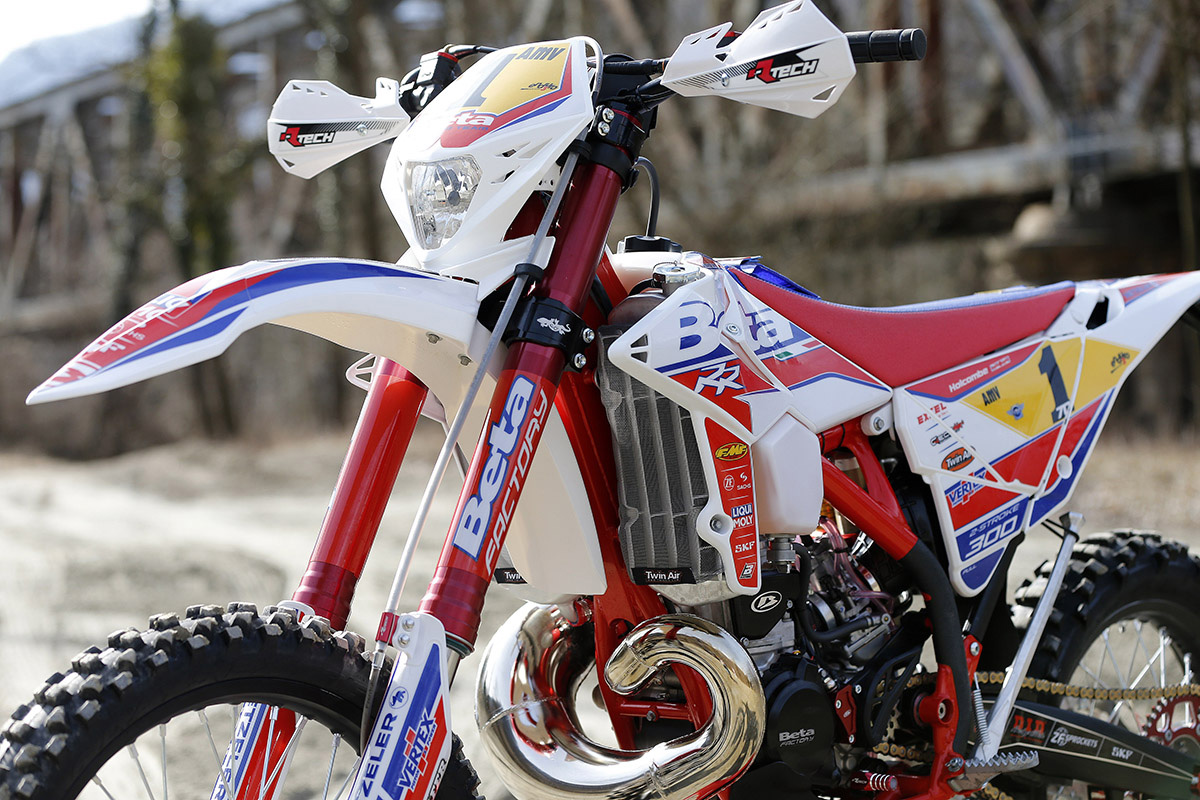 The backbone of my bike is obviously the frame which is standard, has standard geometry and is stock in every way except it isn’t off the production line but hand-made in the Beta factory.

That means it doesn’t have the steering lock but also that the frame receives one coat of paint rather than two for the production models – both those things save weight. My mechanic Luca then basically builds the bike up with standard parts onto that frame. 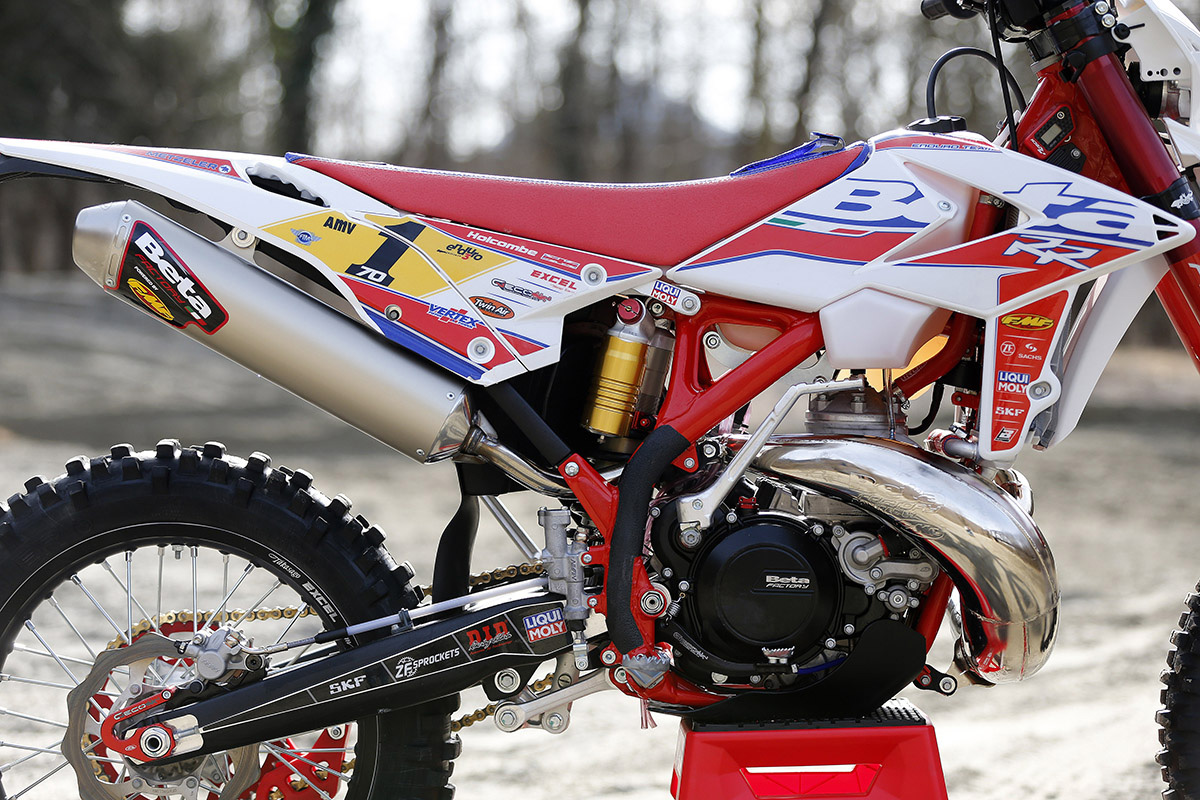 The engine is pretty much standard for 2018 with a standard gearbox. In 2017 we were running a pre-production version of the bike you can buy in 2018 but now the new bikes are out we’re pretty much the same.

I’m quite picky about how I like the power. I’m very much a bottom end to mid-range kinda rider but at the same time I don’t want to lose too much top end as a consequence. So to be fair to my engine guy in the factory, Frederico, he is spot-on with his engine building.

Beta use different mapping in the CDI to suit my preference for power and adjust the exhaust valve and compression ratio to match that need for strong low-to-mid power delivery. 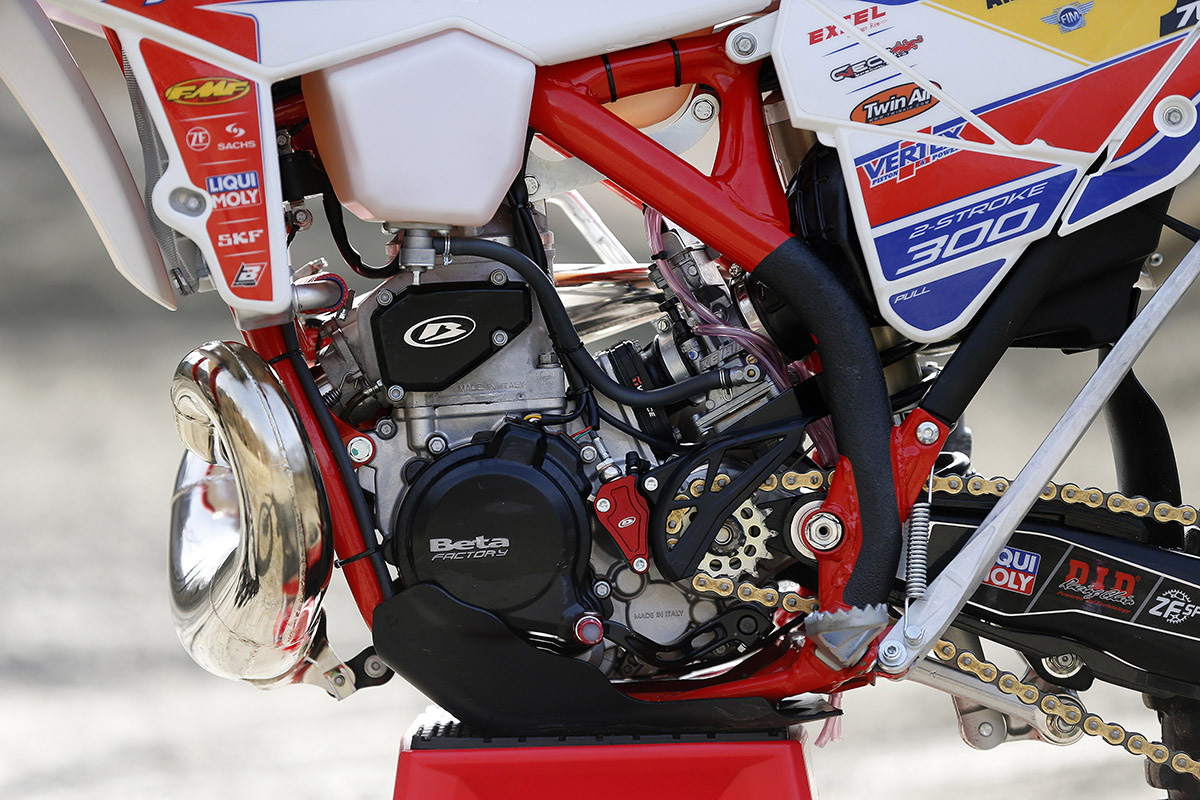 One thing which is also different is we run quite a different needle in the carb to standard, just to get a better response in that initial part of the power delivery. We run a standard reed valve and standard exhaust.

In terms of gearing I use a different primary drive, 14-49 and they use the ZF aluminium sprocket on the rear.

The 300 RR Factory models get the FMF exhaust, which is different to the stock 300. I run the FMF back box off the 250 RR too. I didn’t believe it at first when they told me but it is a bit smaller in diameter and that gives it a bit more help up the top end of the power. 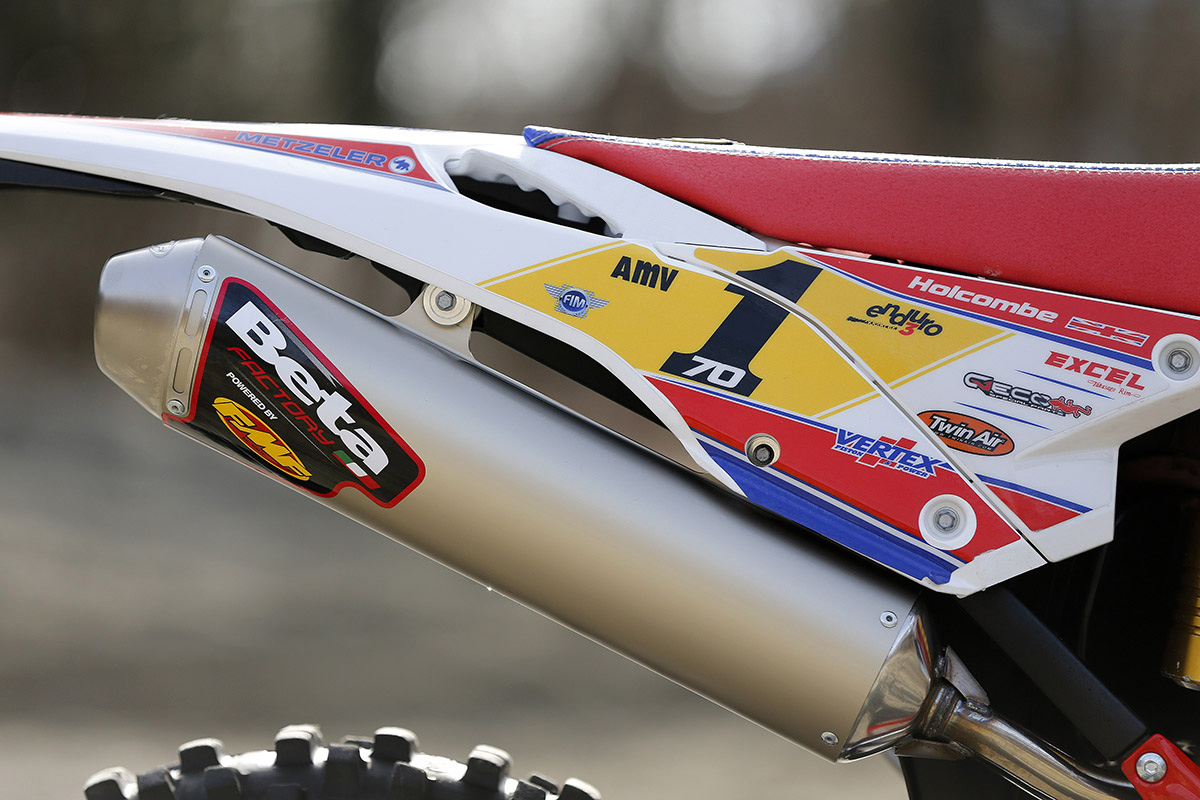 Reikon supply the handlebars and the bar bend is R119BK. That’s quite a low, flat bar but I had been running Renthal 999s previously and this Reikon bend is the closest to that. But this is obviously without the cross bar and that gives it just a little bit more flex which I quite like. We run Race Tech grips and I prefer quite a hard compound.

In the last two years I’ve run the bars quite far back but I’ve changed this year to run them further forward and I find that is easier to help me get over the front more. The reason for that is I was struggling a little bit in some corners to transfer my weight forward and moving the bars has helped. 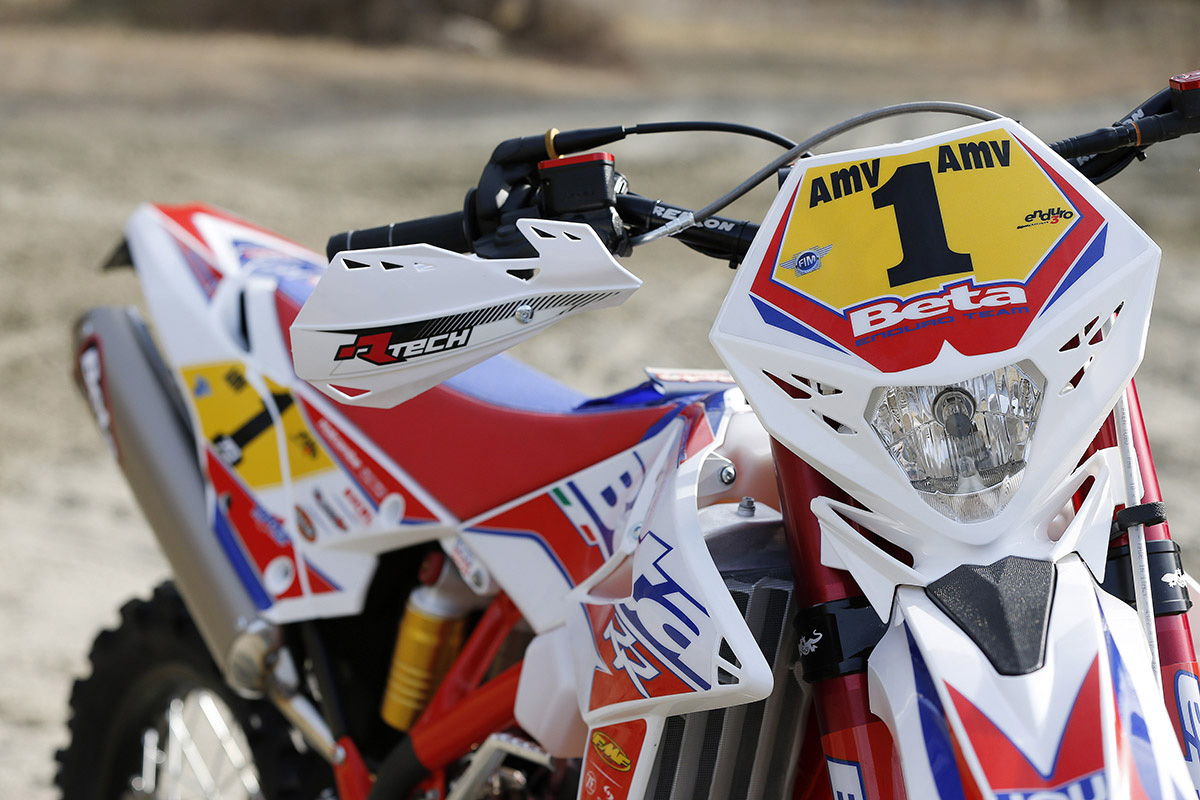 Picky about brakes and levers

As far as brake levers and master cylinders are concerned I’m really picky about where the lever position is clamped on the bar and where the biting point is for both clutch and brake lever.

I like my finger on the brake lever to go right in the groove and for that to be just in the right place. Plus I like the biting point for both to be quite close.

The Nissin brake system is, in my eyes, the best around. I’ve never had brake fade problems with the rear and the front is maybe more power than you really need to be fair. We’re running the standard Galfer discs and brake pads and I’m really happy with the brake systems. 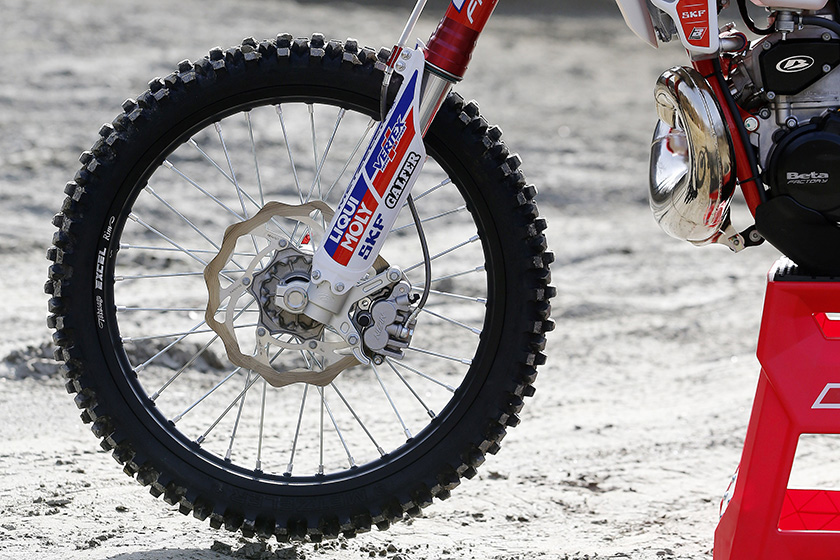 GECO supply some parts to the Beta team including the more rigid triple clamps for the forks plus the longer and stronger rear brake lever. I run my rear lever quite high and the Geco part has a little step ion it which makes it even higher.

Luca, my mechanic, has a fun job regularly filing the brake lever and the footpegs to keep them really sharp too! 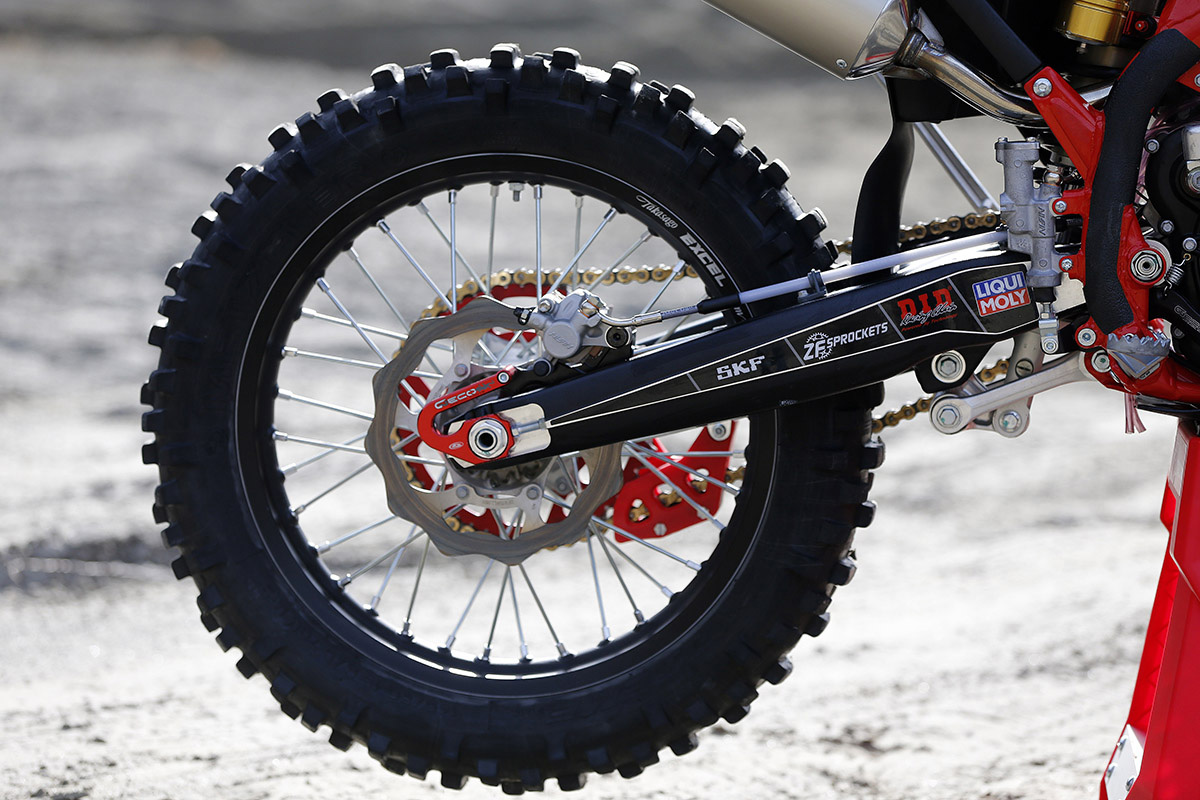 They also run a Geco master cylinder covers and a rear brake caliper mount which helps with its own spacer to strengthen the rear brake power.

I’ve started running the Race Tech gear lever this year after two years running the standard one. I tried it out of interest really and found I liked the shorter one because I don’t have to reach quite so far to change gear.

Metzeler supply tyres and mousses to the Beta Racing team (as opposed to Michelin on the standard machines) and Excel supply the rims to my bike.

What surprises everyone is that we do run standard suspension – and I’m not just saying that to keep everyone happy. Obviously I change the springs in the forks and shock to suit my setting and weight.

We have spent quite a bit of time this year testing in Corsica to make sure we are pretty dialled with the setting. We have tried lots of different things with the shock but ultimately always wound back to near standard.

In the last years I’ve pretty much just gone along with the setting being ‘good’ but I wanted to make sure we were more than happy with it.

We haven’t changed it a lot in the fork or the shock because I found a pretty good setting last year – which derived from my Finland setting. I tried the setting after the Finland GP and really liked it (in other conditions) and just changed it a little bit to suit.

Steve Holcombe’s bike surprised us. We knew somethings were basically the same as the RR 300 Racing you can buy from a dealer but we weren’t expecting it to be that close. Sure, there are differences but a lot of it is about making the bike work best for Steve’s personal set-up – the kind of changes we all like to make to our own bikes.

In the end if you’re happy with your bike you’ll ride well and ultimately, it always boils down to the rider.