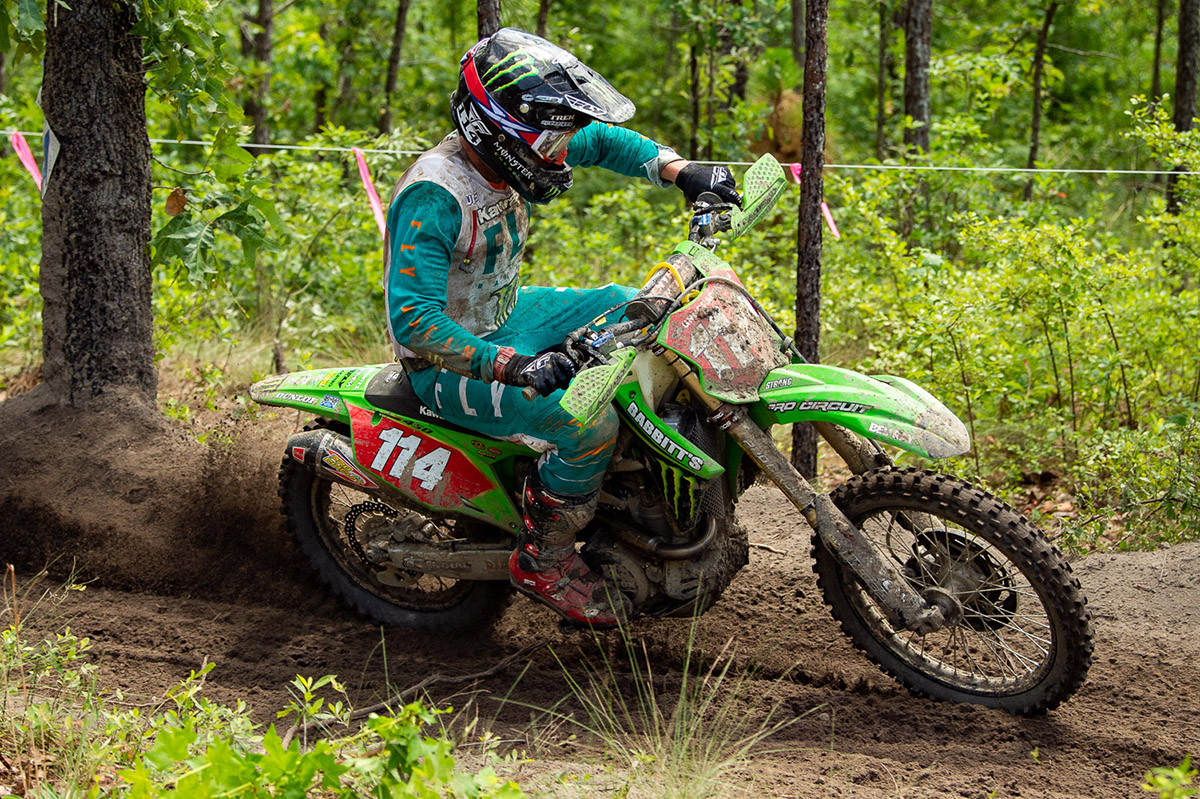 A first GNCC win in four years for Josh Strang ends Kailub Russell’s 2020 dominance at the Camp Coker Bullet GNCC where a race-long battle ends with Strang victorious as the seven-time champion crashes...

“Overdue” was the phrase which first sprang to mind for Josh Strang as he took his Babbitt’s Online Monster Energy Kawasaki to victory at round five of the 2020 Grand National Cross Country (GNCC) series. The former champion has been threatening victory all 2020 season with a run of form which has positioned the Australian as closest challenger to the ever-dominant Kailub Russell. 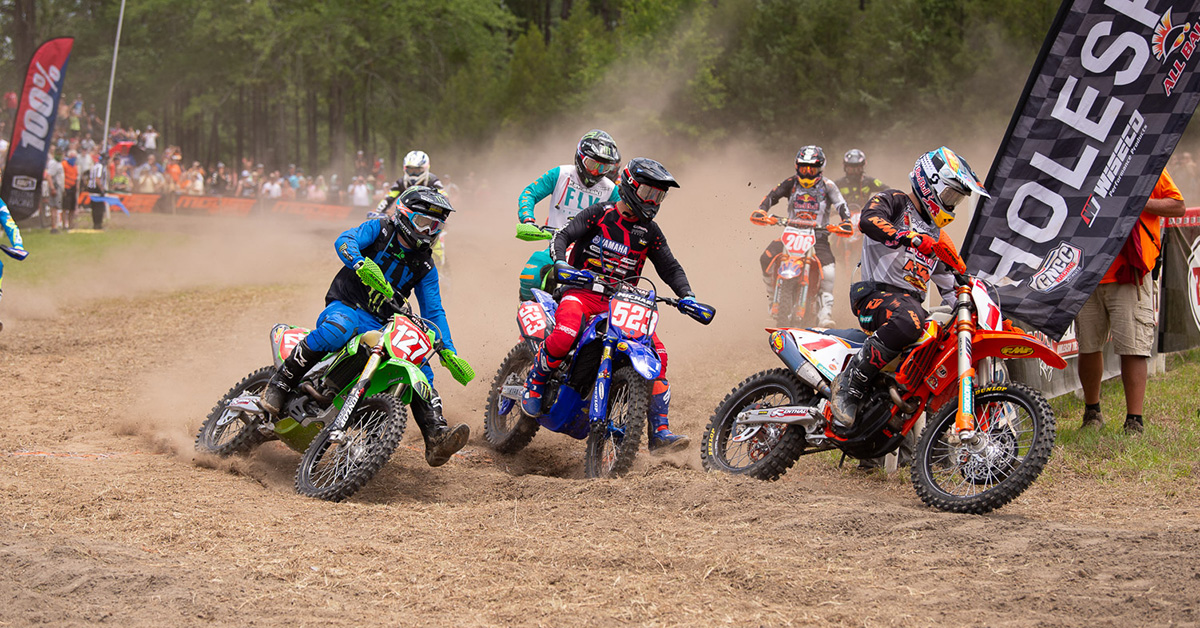 Round five of 2020 at Society Hill, South Carolina unfolded in familiar fashion with Russell taking the holeshot and lead a group of riders including Strang, Layne Michael and Josh Toth for the first hour. The lead changed hands several times between Russell and Strang through the early part of the race with pit stops and lappers as ever playing a role. By the mid-race point Strang was beginning to show his intent with fast lap times that meant Russell, who took an extra pit for fuel, was playing catch-up.

There was nothing in it as the white flag came out as the pair began the final 20+ minute lap just over one second apart with Russell on the tail of Strang and lining up a pass. But drama unfolded as Russell hit a soft berm, pitching himself over the bars and crashing into a fence. The FMF KTM crew was luckily able to help untangle Russell and his bike from the fence, allowing him to nurse his way to the flag.

It was a rare crash for Russell but it takes nothing away from the impressive performance from Josh Strang who has podiumed at every round this year and sits 23 points adrift of the championship lead.

Speaking about his crash after the race, Kailub Russell explained it was one of the scariest of his career: “Josh [Strang] was riding really good on the whole track today and I couldn’t really make up a lot of time on him. On the last lap, I did have a spot picked out that I had made a pass the lap before and I was trying to stay on him so when we got there I would make the pass. 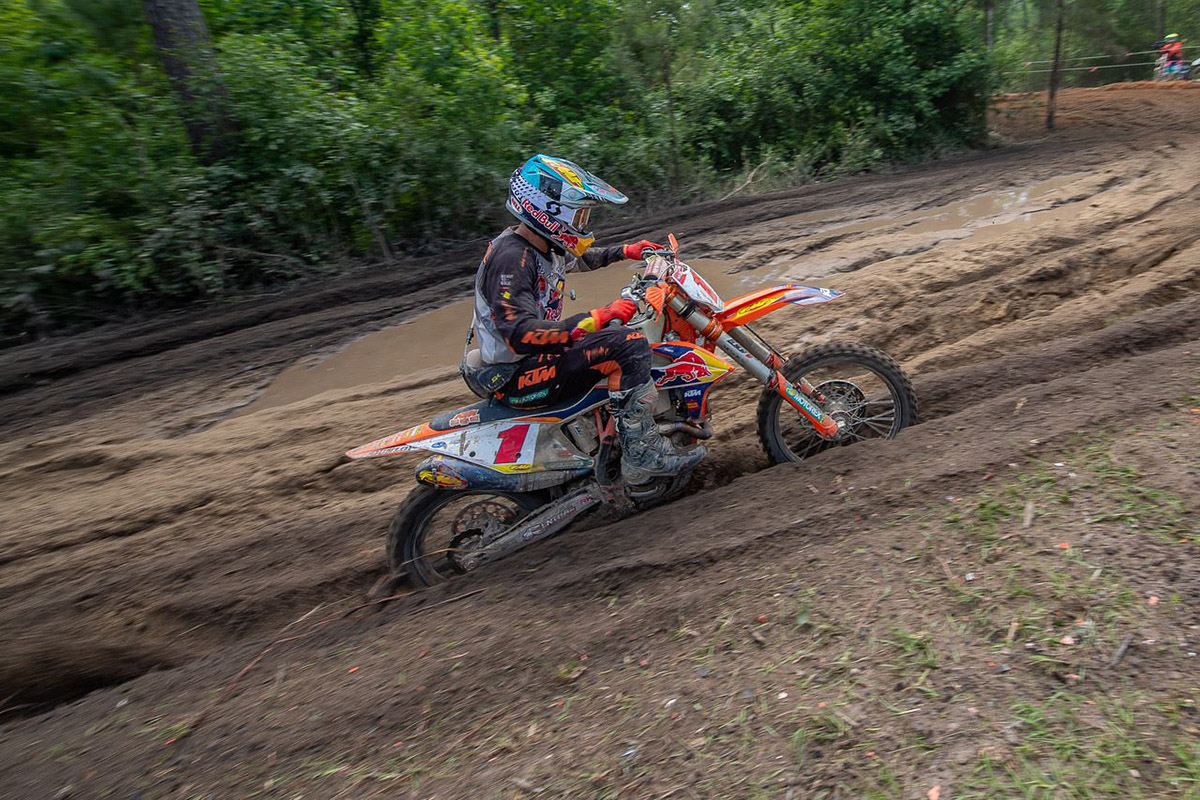 “I was pushing hard and we came out of the woods and turned left on a road at the bottom and I got in the fluff on the berm and my bars knifed. I endo’ed over the bars and went into this six-foot fence. I hit it so hard that my body was wedged between the fence post and my bike was on my head spinning, it was probably the scariest crash I’ve ever had.”

Camp Coker Bullet was also a return to the GNCC podium for Grant Baylor. While brother Steward remains side-lined, and while the details surrounding his departure from the FactoryONE Sherco team remain a mystery, Grant set about his familiar mid-class start before another hard-fought ride through the pack.

Grant took Sherco’s second GNCC podium result with third place, proving the FactoryONE team bikes are sorted and up to speed with this brutal racing. 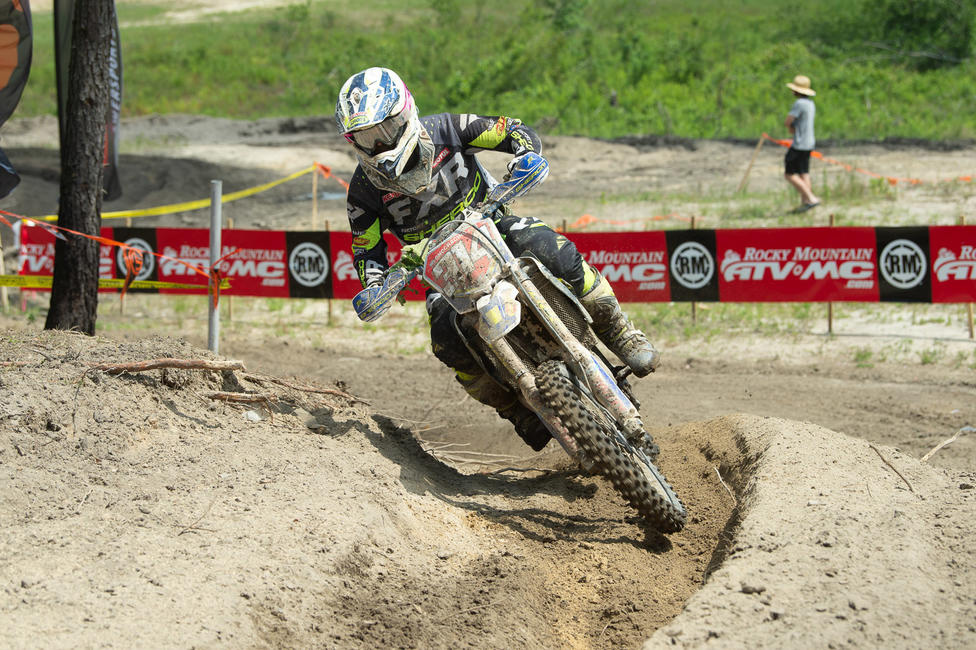 Also onboard for some serious training away from his more familiar Extreme Enduro was Cody Webb. A last minute change up to XC1 class by the organisers (Cody was scheduled to race XC2) saw with him the big boys but Webb finished a creditable P9 in class and 46th overall. 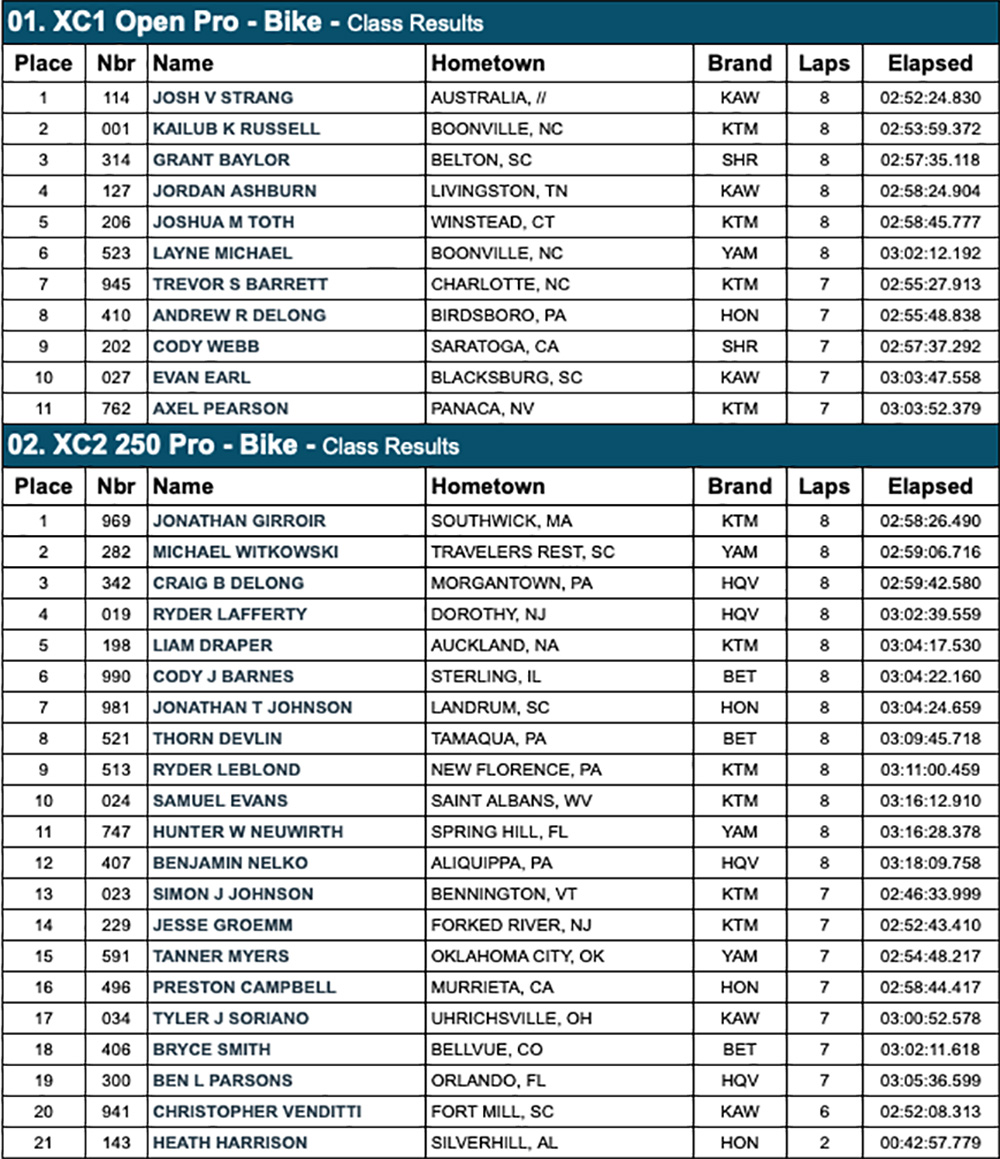 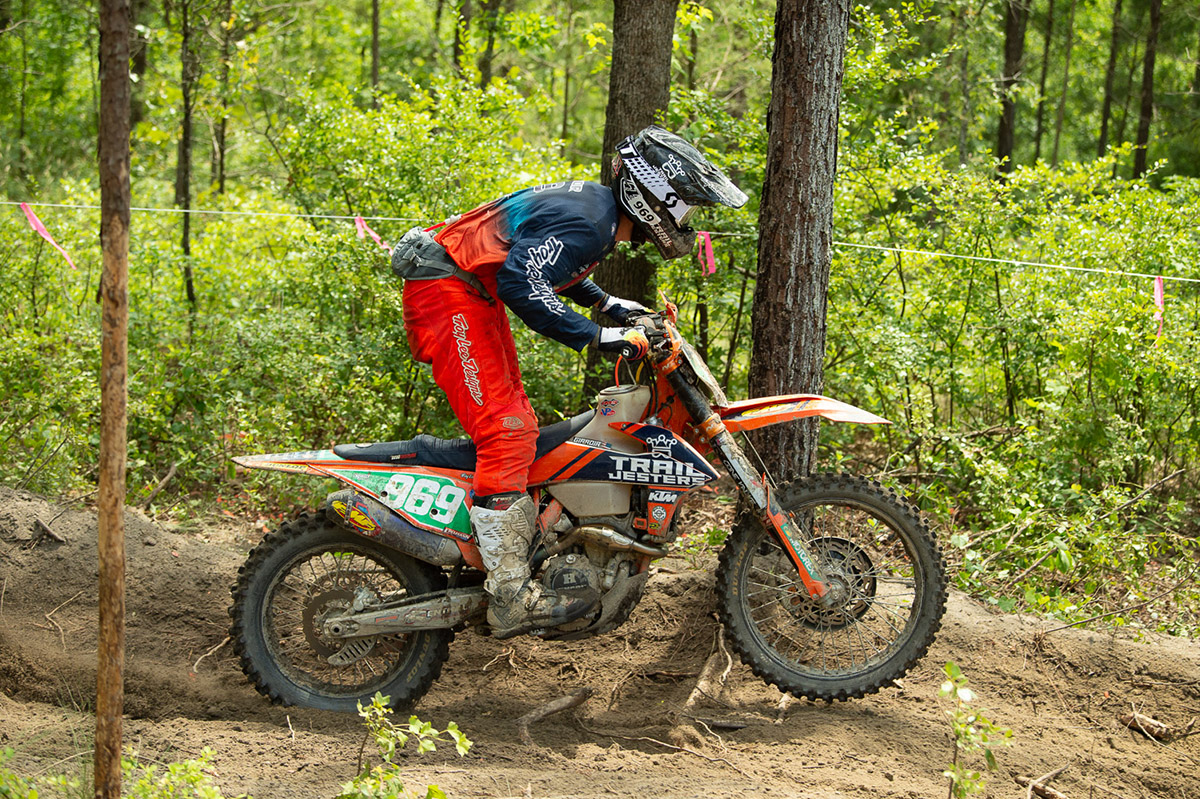 Trail Jesters KTM Racing’s Jonathan Girroir led six of the eight laps on the way to his second victory of the season but it wasn’t without a fight from Michael Witowski.

2020 is proving a hot one in the XC2 class with Girroir, Witowski, Craig Delong, Ryder Lafferty (to name four at least) all pushing for the top step each round. It was no exception at Society Hill but Girroir proved himself strongest pulling clear of his rivals by the flag and taking fifth overall on corrected time. With that result, Jonathan takes the lead in the XC2 250 Pro Championship.

Becca Sheets killing it in 2020

Five wins from five rounds in the WXC class this season shows Becca Sheets is enjoying life since switching to the BABS Yamaha. Mackenzie Tricker took the holeshot in the AM race, but it wasn’t long before a three-way battle between Rachael Archer, Rachel Gutish and Sheets set the race pace at the front. 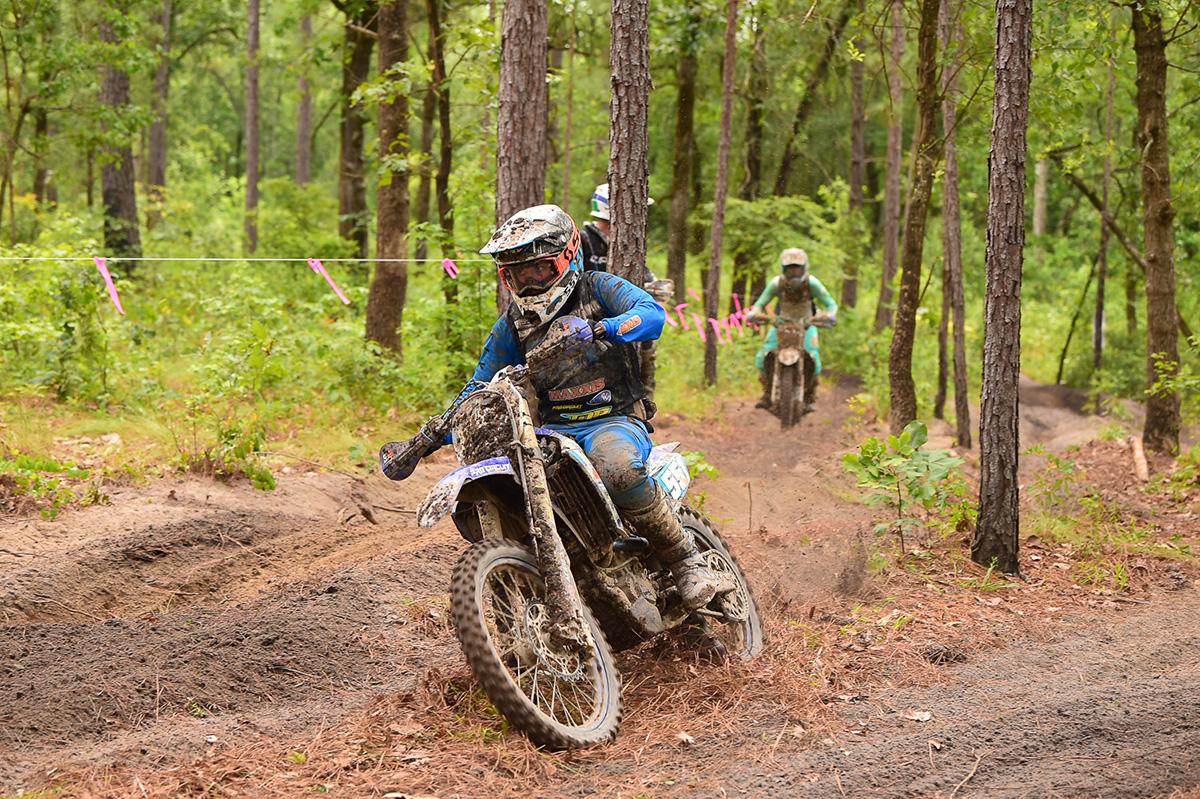 Sheets had the lead after lap one but then had to follow Archer until the penultimate lap when she took the lead again and never looked back. The final two laps for Becca were easily faster than her rivals which set up yet another win which also extends her championship lead to 36 points over Tayla Jones who finished fourth. 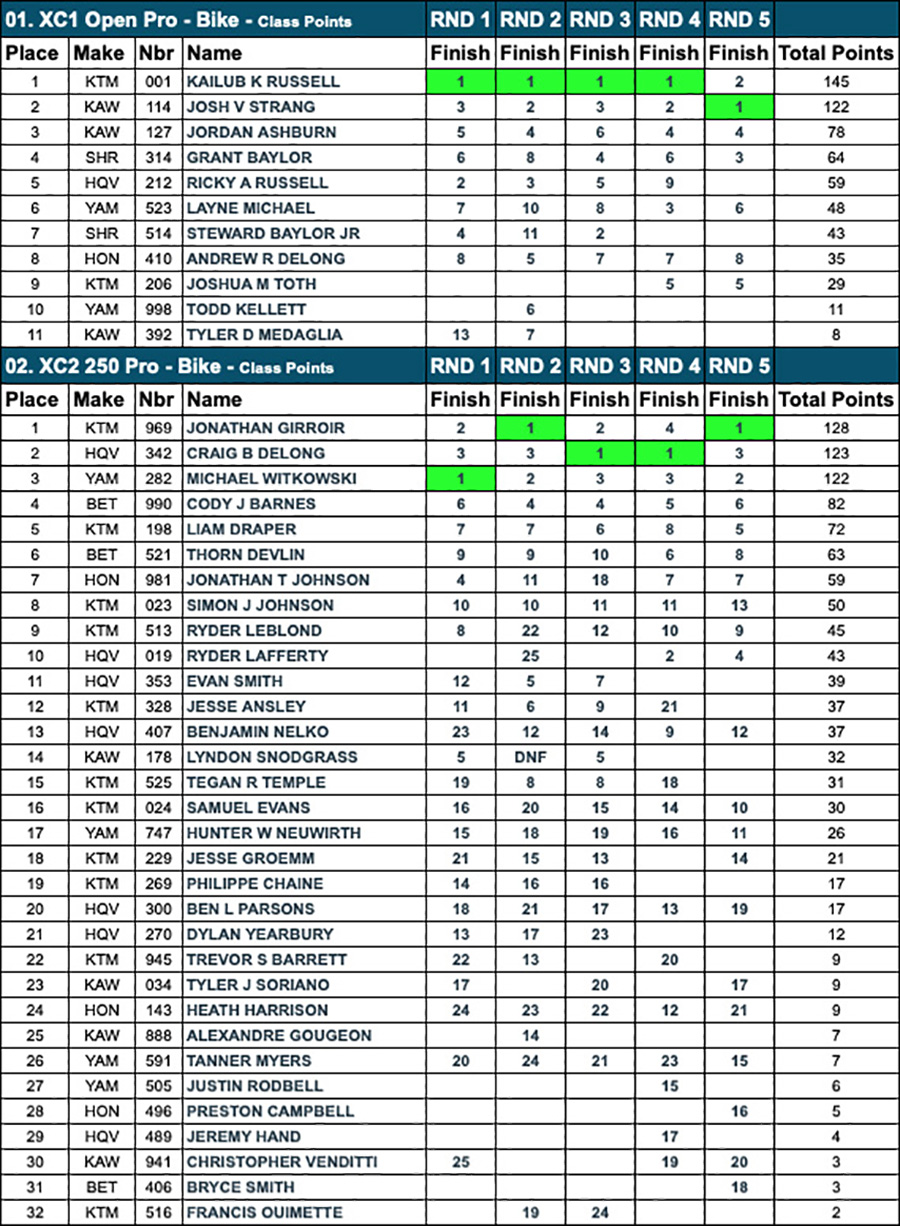