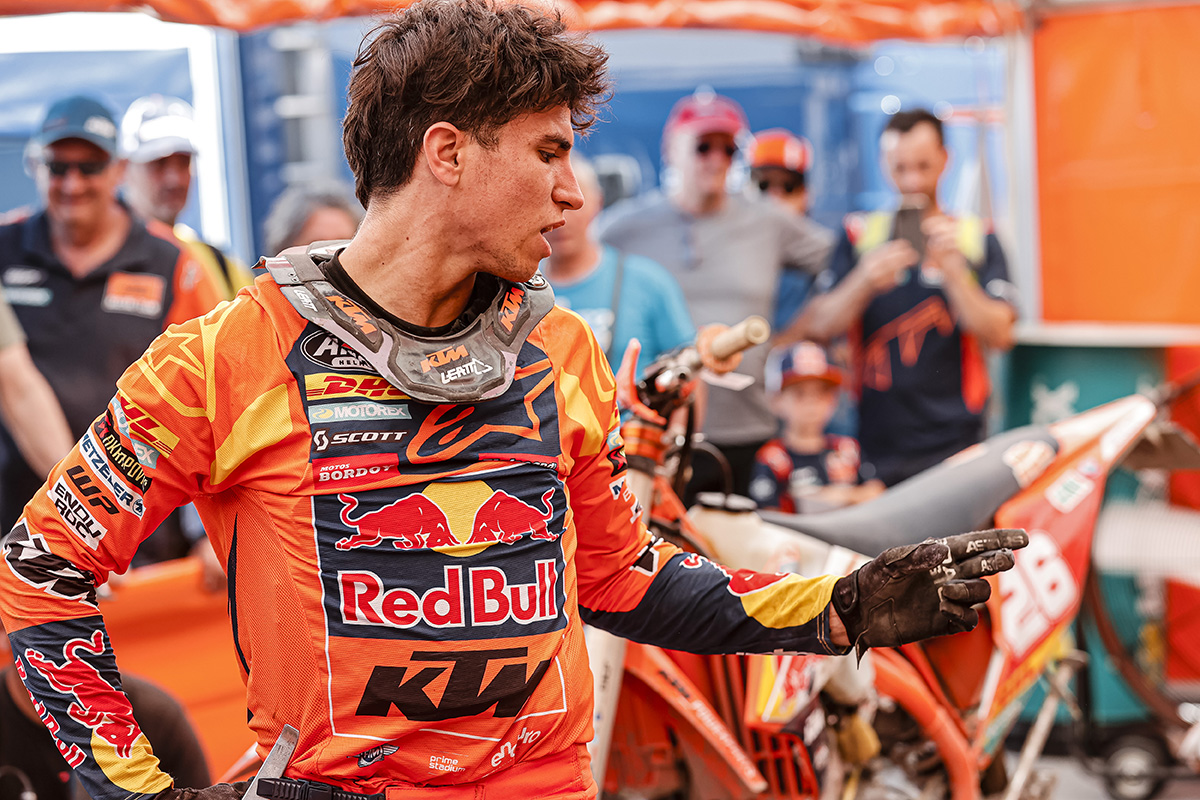 Josep Garcia ruled out of Portuguese EnduroGP with broken thumb

KTM Factory Racing's Josep Garcia will miss this weekend’s EnduroGP World Championship round four in Portugal after breaking his thumb in a monster crash at the Italian GP.

The third round of a the Enduro World Championship in Carpineti proved to be a game of two halves for the reigning E2 champion and (at the time) overall series points leader Josep Garcia. A blistering performance on day one saw him edge Wil Ruprecht for the win only for the Australian to turn the tables on day two.

In the process of trying to close down his main rival in the ’22 world title chase on Sunday, Garcia crashed heavily on a fast section of the day’s final enduro test, causing the test to be cancelled and himself a whole heap of pain.

Battered and bruised, the 25-year-old finished his race weekend and placed 16th overall but it later transpired he’d injured his hand more seriously. Taking his tally of broken hands this season to two already (in fact the same left hand after hitting a tree in the Palakta GNCC race earlier in the year), Josep has a broken thumb this time.

“I ended up having a broken thumb which was displaced,” explains Josep. “I also had a big blow in the back of my hip which required two stiches, and my whole arm was kind of burned and grazed.”

2022 EnduroGP results: Garcia and Ruprecht dominate day one in Italy

The operation is said to have gone well but it means Garcia will miss the fourth round of the EnduroGP World Championship in Coimbra, Portugal this coming weekend.

“Today I had surgery done to my thumb and it took one hour more or less, it wasn’t a long operation.” Garcia continues. “The doctor said that everything went well. They put a plate in and some screws. Obviously, I won’t be fit to race in Portugal, so the goal is to come back for Slovakia. Anything can happen in the recovery process but if everything goes to plan I should be able to be there. Now I just want to concentrate on my recovery and being able to race again soon.”

Fabio Farioli, the Red Bull KTM Factory Racing Enduro Team Manager says, “Obviously, it’s a great shame for Josep to have crashed out of the fight for the win on Sunday as he was riding incredibly well and pushing hard for the overall victory.

“The medical staff were excellent at the event – they checked him over at the scene and before each of the last two tests of the day. Finally, when we got back to the paddock at the end of the race, we could see he had damaged his hand and needed further checks. “Thankfully, today’s surgery has gone well, and Josep is already recovering. Once he is back on his KTM we will form a plan for his return to racing. For now we wish him all the best with his recovery.”