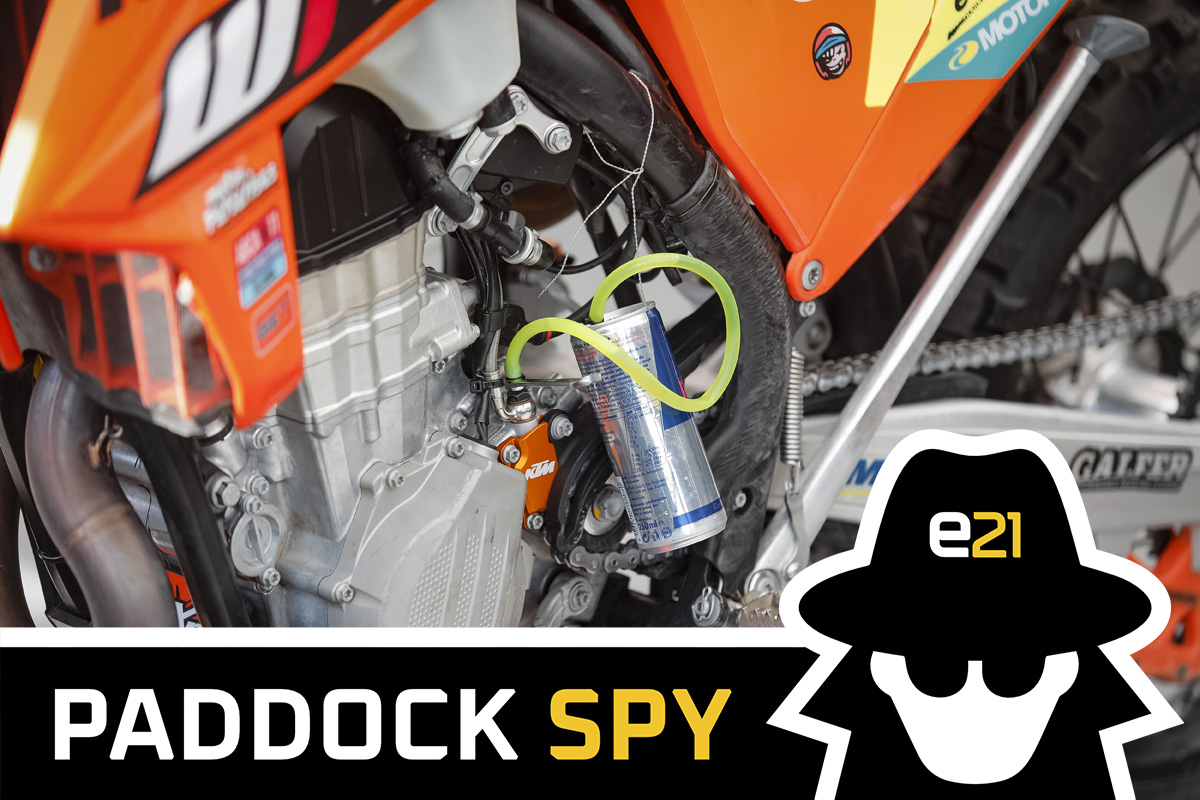 Enduro21 snoops around the EnduroGP paddock in Sweden at round four of the 2021 World Championship focusing on the bikes, the parts, and takes a closer look at the set-ups used by the world’s best enduro riders.

This is a new feature for Enduro21 focusing on the gems we spot from inside the race paddocks around the world. No matter where we are, from ISDE, EnduroGP, Hard Enduro World Championship or national races, it is the bikes, the parts and the people which make fascinating viewing just as much as the racing.

In this first Paddock Spy we’re snooping around the bikes and race awnings ahead of the Swedish EnduroGP in Skovde.

Swedish rider Arvid Modin’s Yamaha 125 two-stroke is a rare enough bike to begin with but the aluminium tank certainly adds to its exclusivity. 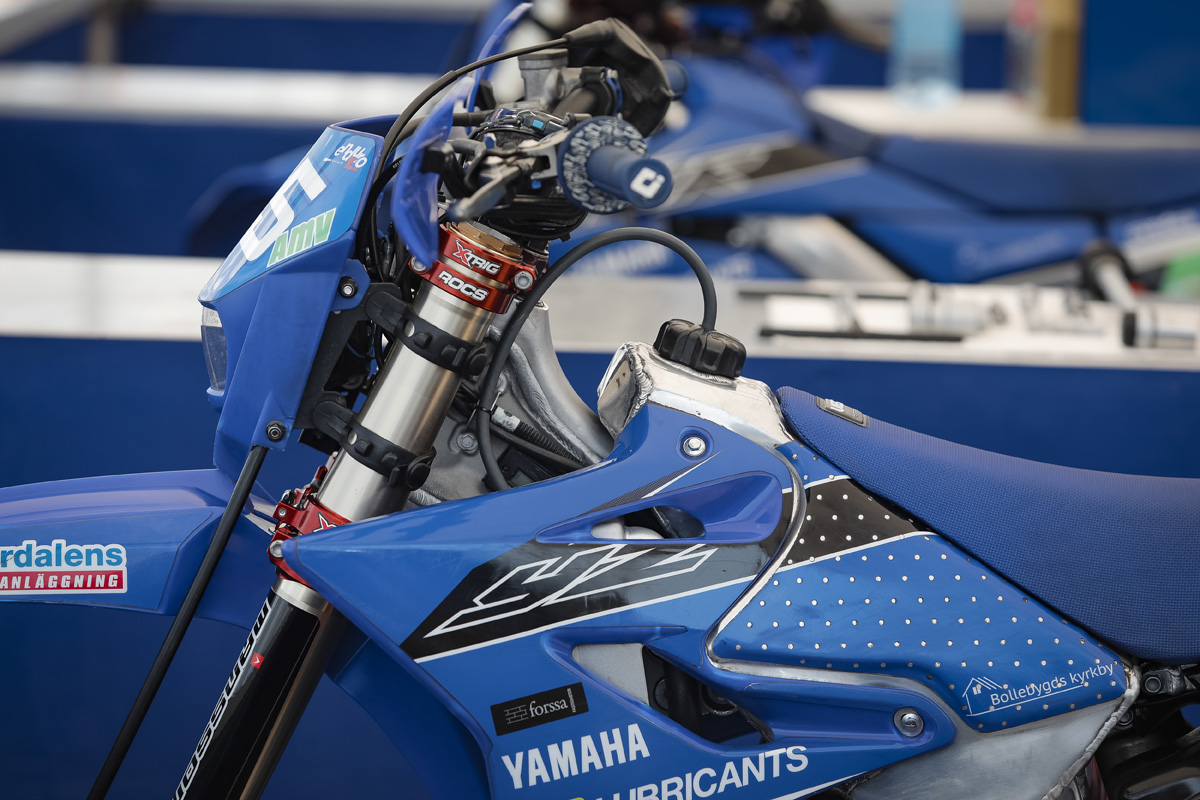 The Johansson MPE enduro team is one of the most established and long-standing (and dedicated) squads in the GP paddock. They continue to field the blue bikes despite them seemingly going out of fashion at the GP level.

Modin’s immaculately turned-out YZ125 is typical of their machines and this hand-crafted ally tank caught our eyes. It is stronger obviously but it gives them a little more capacity too.

Josep Garcia’s droopy Acerbis handguards are looking a little sad but the Spaniard prefers it that way, drooped down and outwards from his Renthal bars. 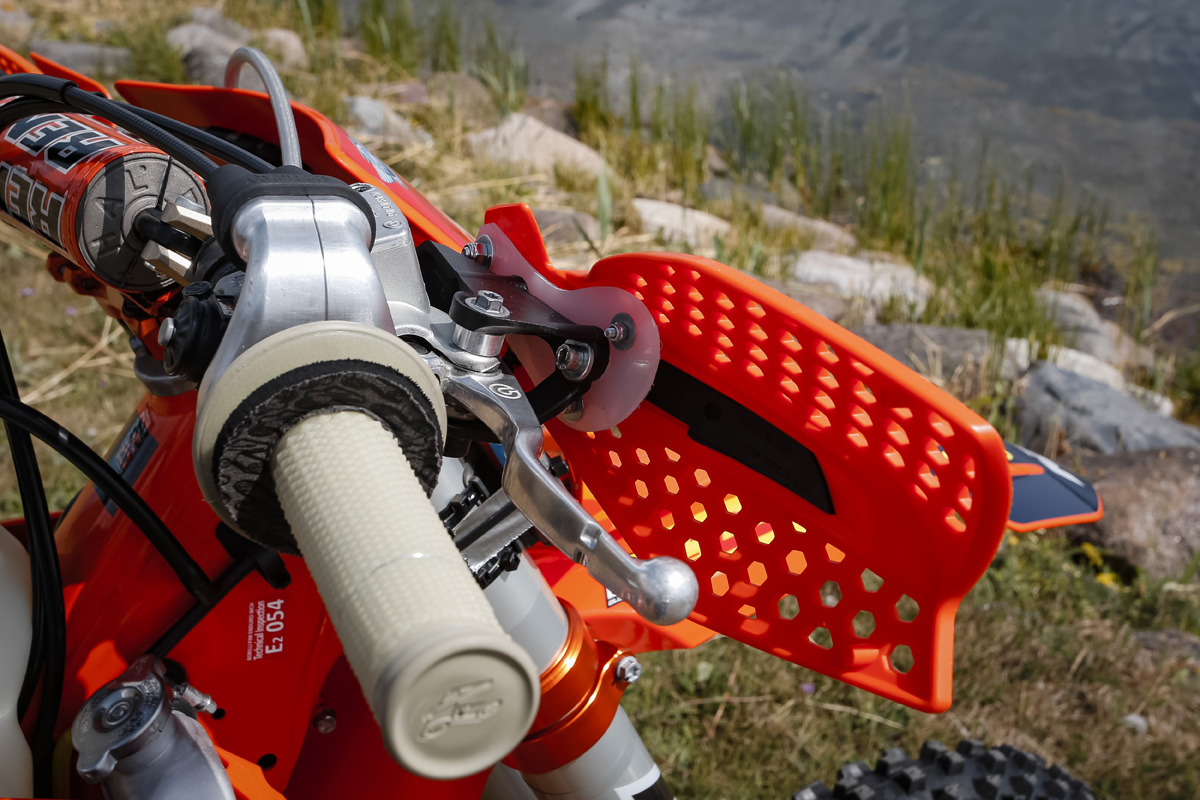 Round the backside of the handguards is interesting though. The KTM Factory Enduro team use the clear, plastic plate between the mount and the Acerbis deflector. It’s strong but also the Acerbis front piece bolts directly on the KTM standard (black) bracket.

There’s also a fat spacer on top of the front brake lever pivot point to deal with the old-style master cylinder they’re using (new ones are fatter at the pivot point apparently). Having the spacer on the right but not the left means the two guards sit at different heights.

Check out also how close Garcia likes his brake lever set towards the bars. The lever travel is super-minimal and set like a switch.

More than one use for a Red Bull can 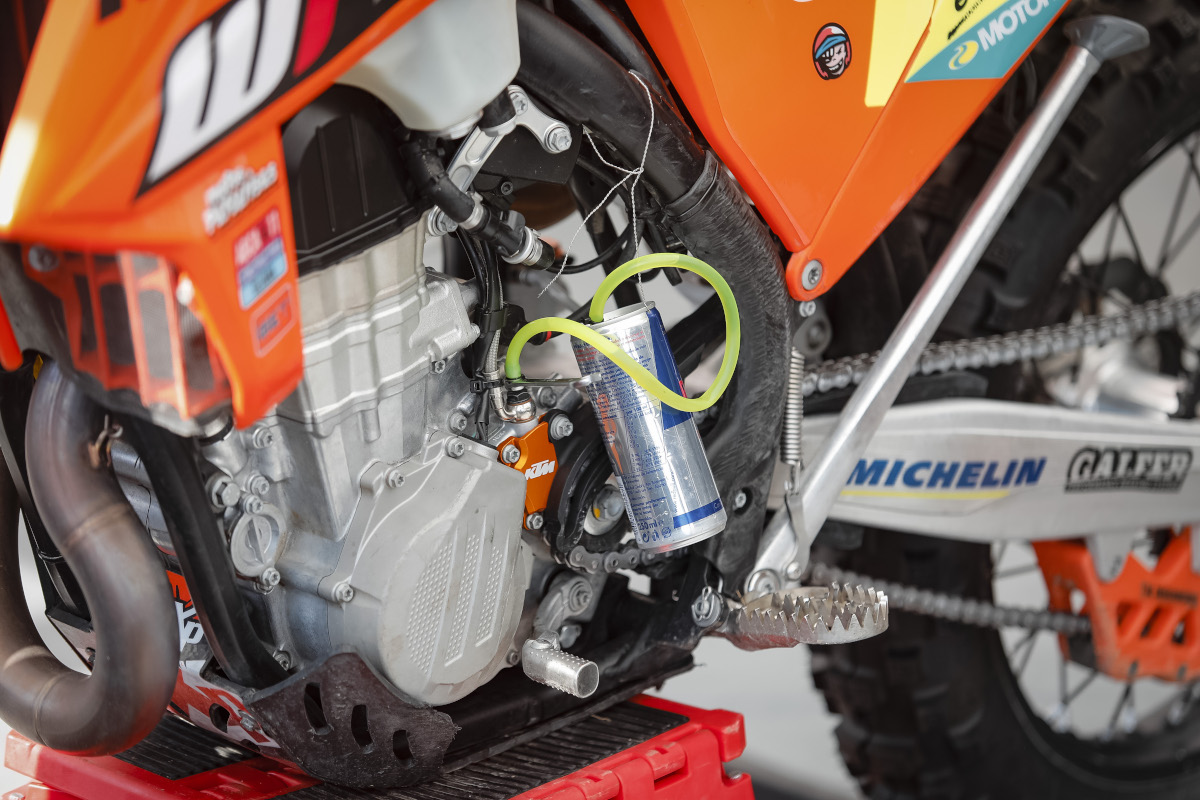 Keeping on top of the clutch (and brake) hydraulic fluid pressure and making sure those air bubbles are out the system requires a regular bleed. Why not use a spent Red Bull can?  Hopefully nobody picked it up afterwards and took a swig! 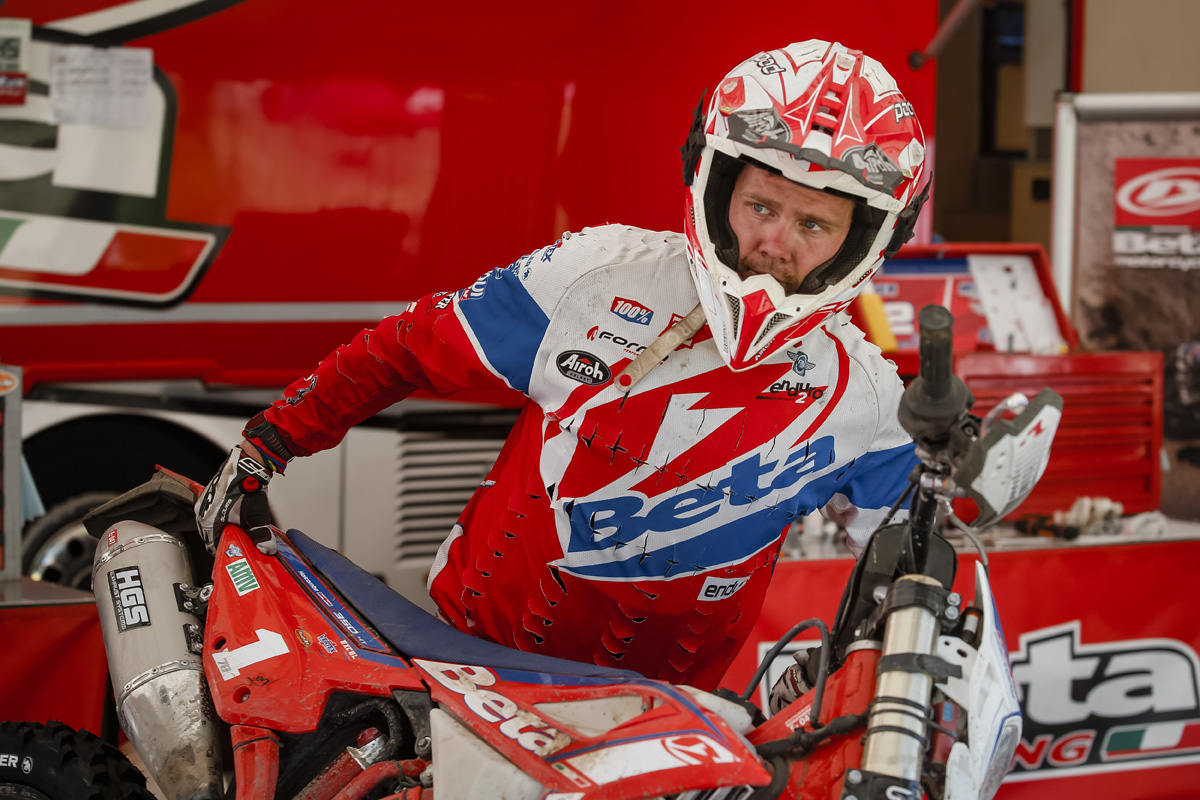 When the weather gets hot any additional air flow to cool off your body is a good thing, especially in the trees like it did here in Estonia where the air wasn’t circulating. It might not look like the best way to treat your race shirt but getting the scissors or knife out like Holcombe has here helps the flow of cooler air to his torso. 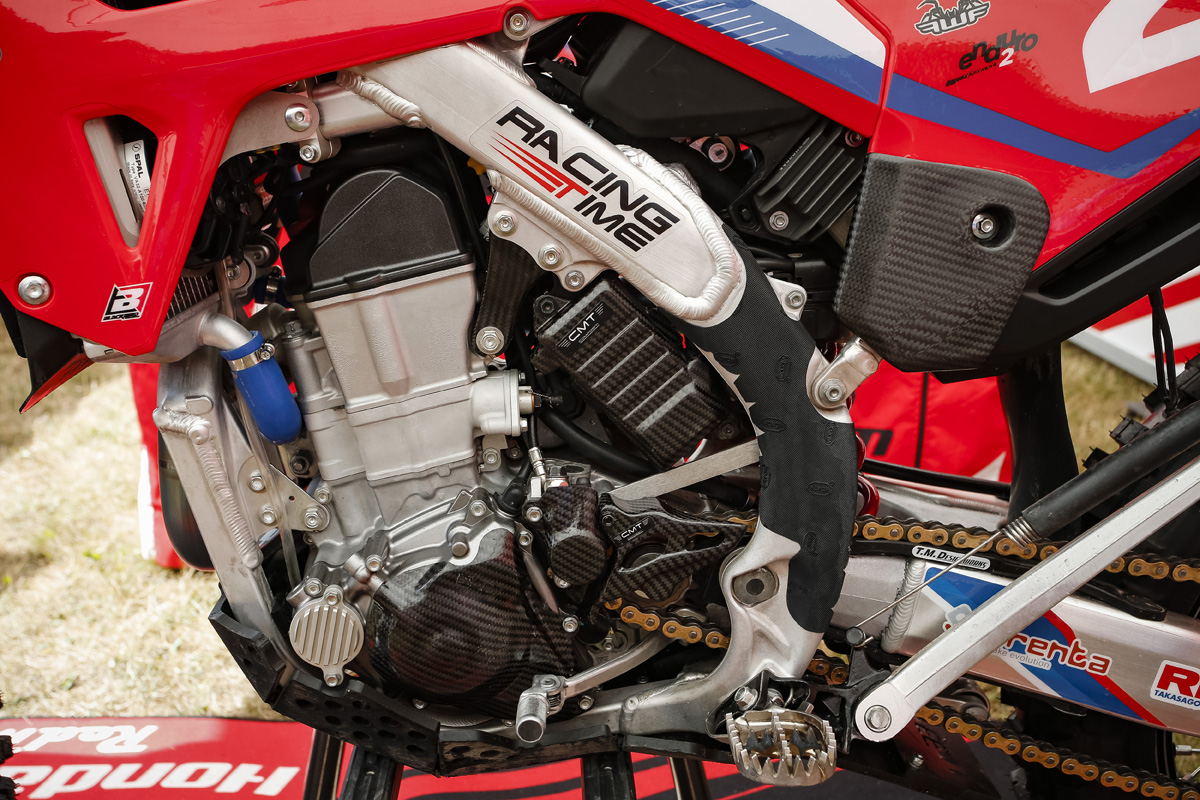 CMT Racing parts are spread across the RedMoto Racing Hondas but the left-side of the race bikes is littered with protection and case covers. The front sprocket shroud is a neat one and note also no split pins and washers on the footpegs pins as is common. It’s locking nuts all the way here.

There was no shortage of foam and sponge deployed around the bikes in Estonia GP paddock, (round three of the EnduroGP series one week previous) so we’ve added a shot from there too. Chiefly the sponge is there to combat the sand which was so much of a feature of the course in Saarema. 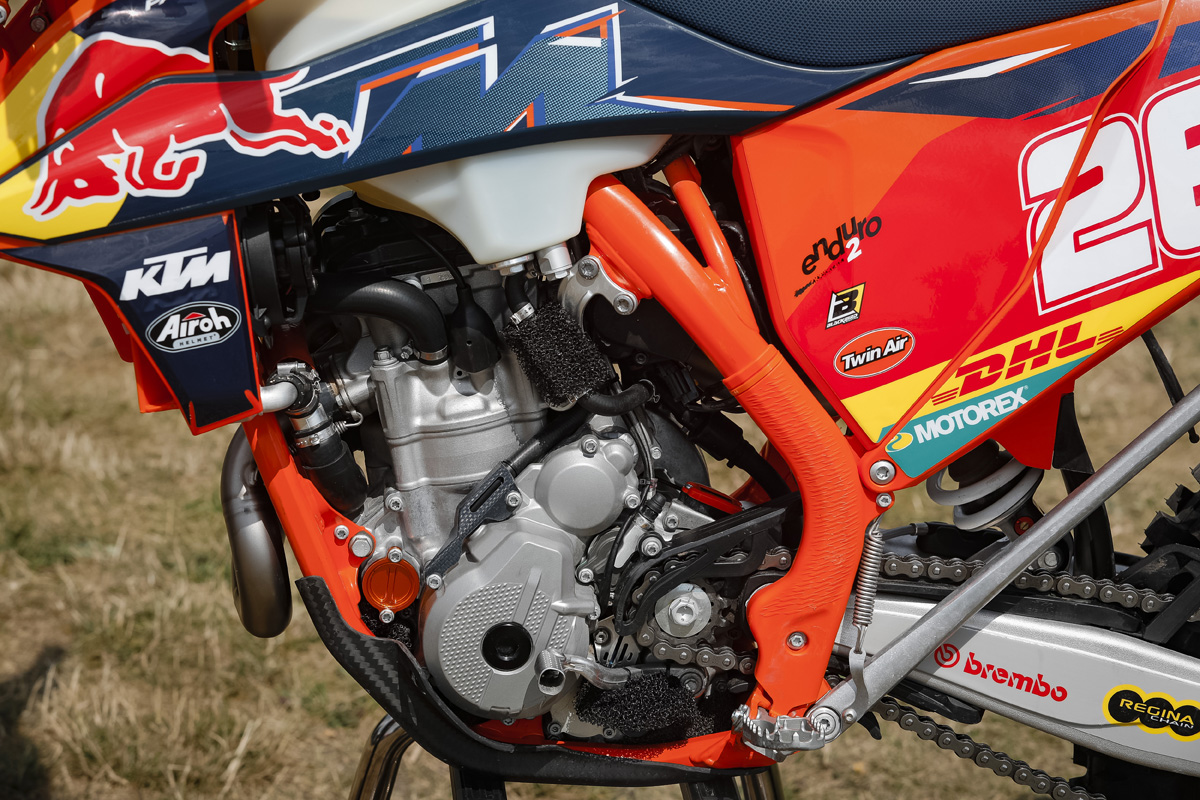 Teams use coarse foam to stop the build-up of dirt in sump guards, deflect sand away from the chain in areas like under the gear lever or keep it away from fuel connectors, for example like here on Garcia’s factory KTM. 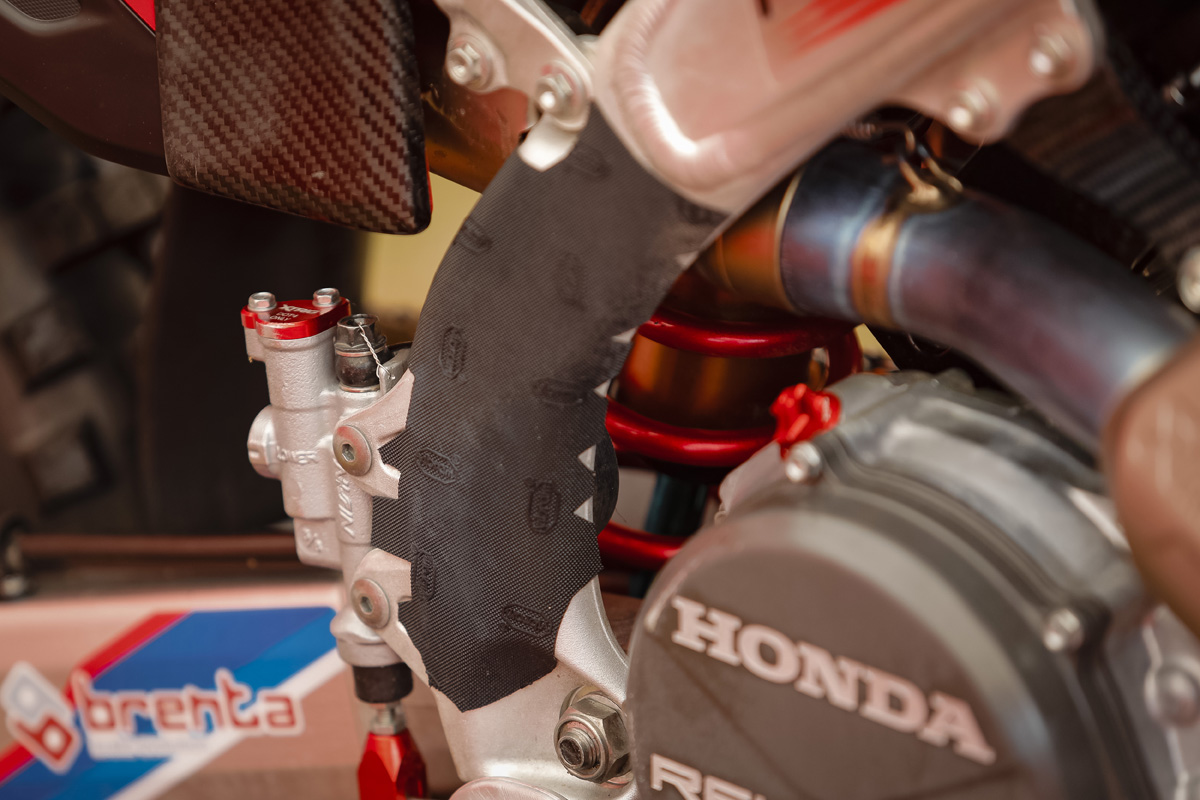 Lockwiring nuts and bolts remains the fail-safe way of making sure a part is definitely not going to come loose. The neat little twist of wire here is on the RedMoto Hondas rear brake master cylinder top hose and banjo bolt. Better safe than sorry. 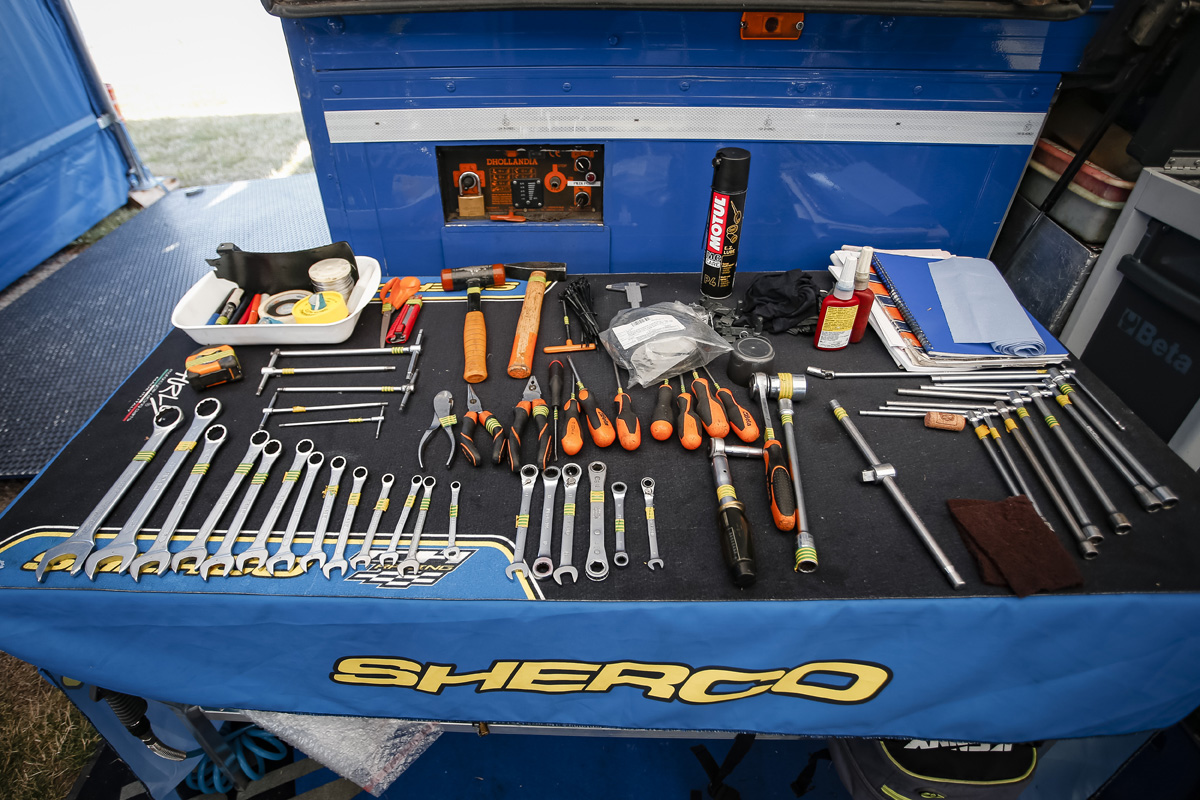 The CH Racing awning houses the official Sherco Factory team and it is one busy tent with riders across the classes. This images shows their tools laid out ready and waiting for riders and bikes returning from the tests. 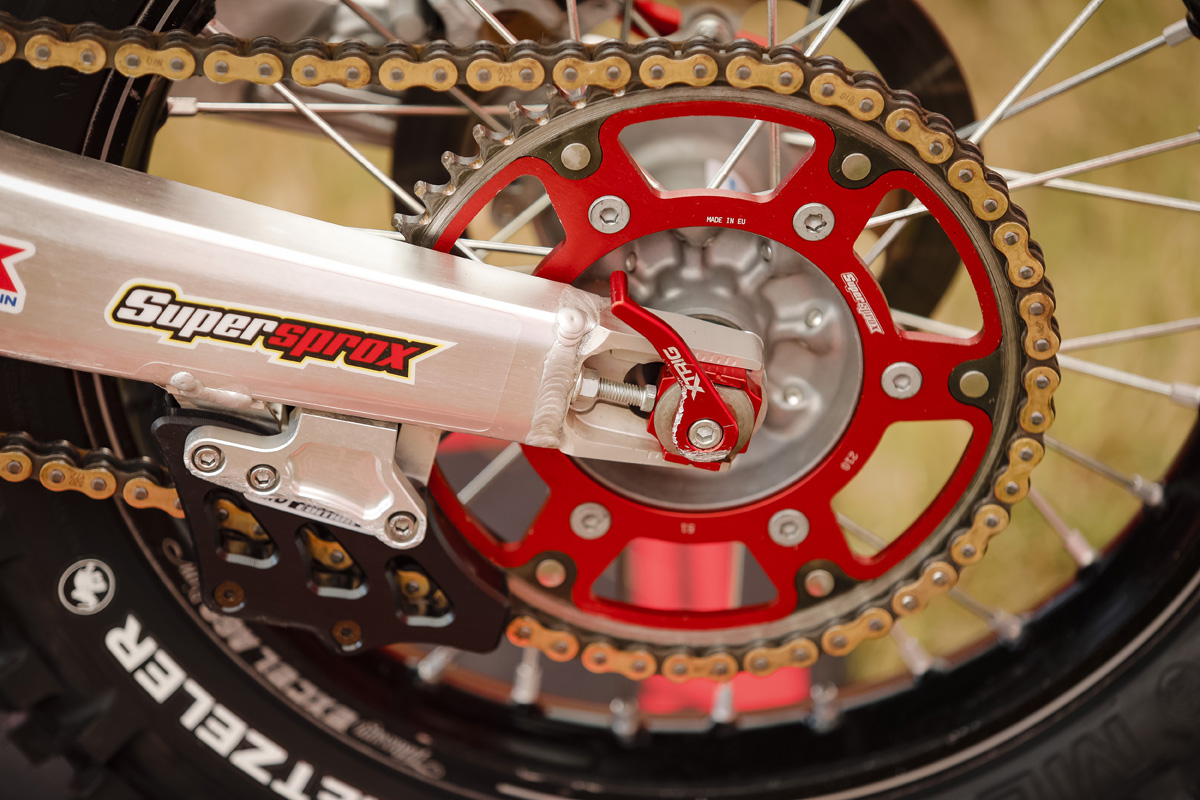 These additional little plates are getting more common, particularly with extreme riders but we’re also seeing them in traditional enduro paddocks these days too.

The aluminium guard sits outside the mount points for the chain and rear sprocket guard as an extra defence against the hits from rocks on those two vulnerable mount bolts.

An army marches on its stomach

No question you gotta eat on these long days at an EnduroGP and there are few who would argue the Italian Boano team isn't one of the best at it. Insalata caprese per favore signora Boano. 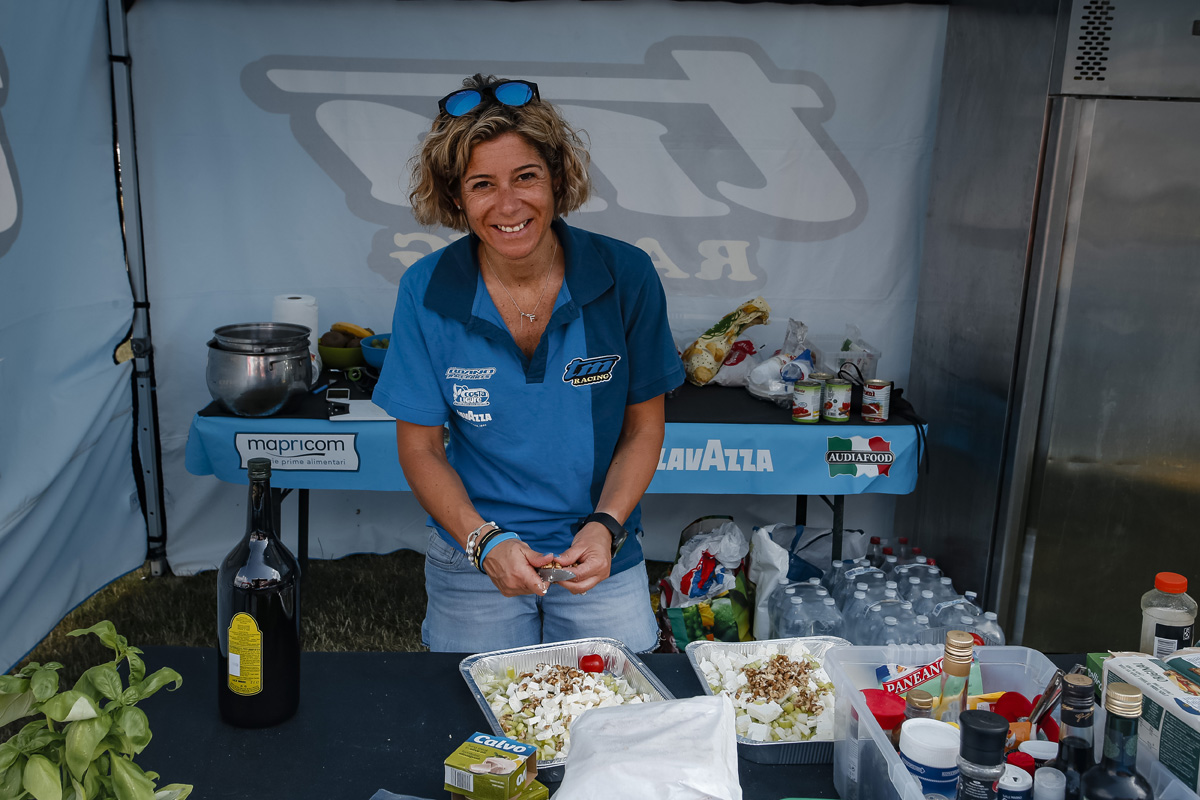