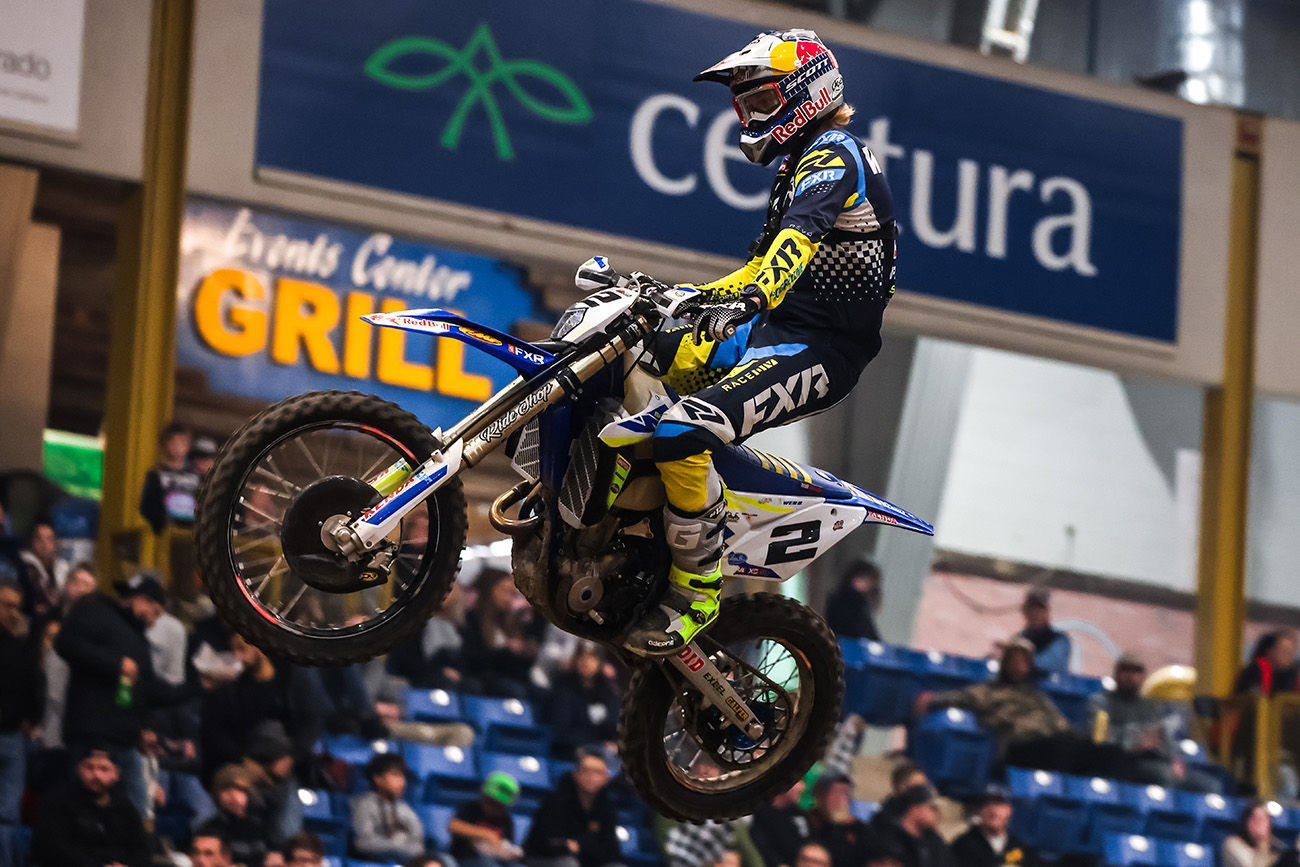 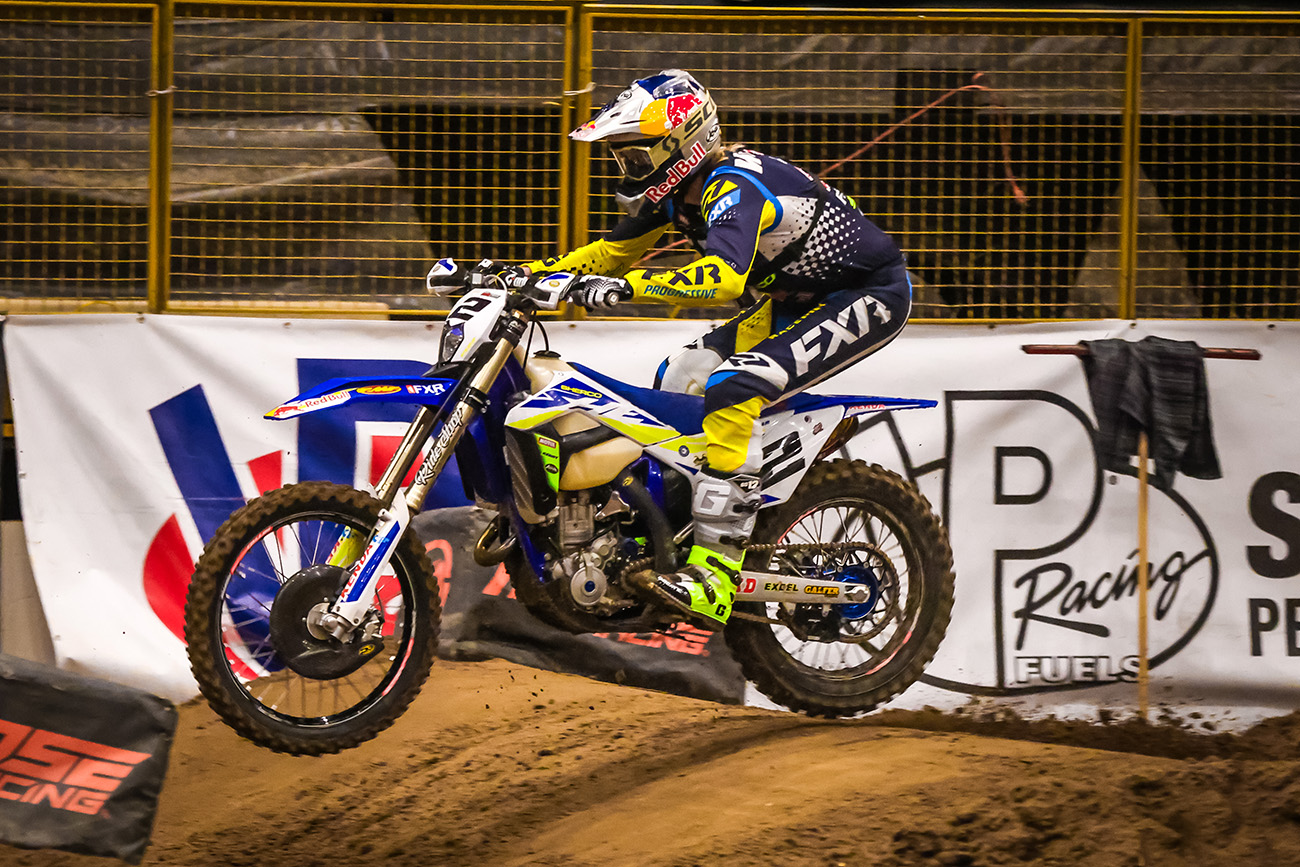 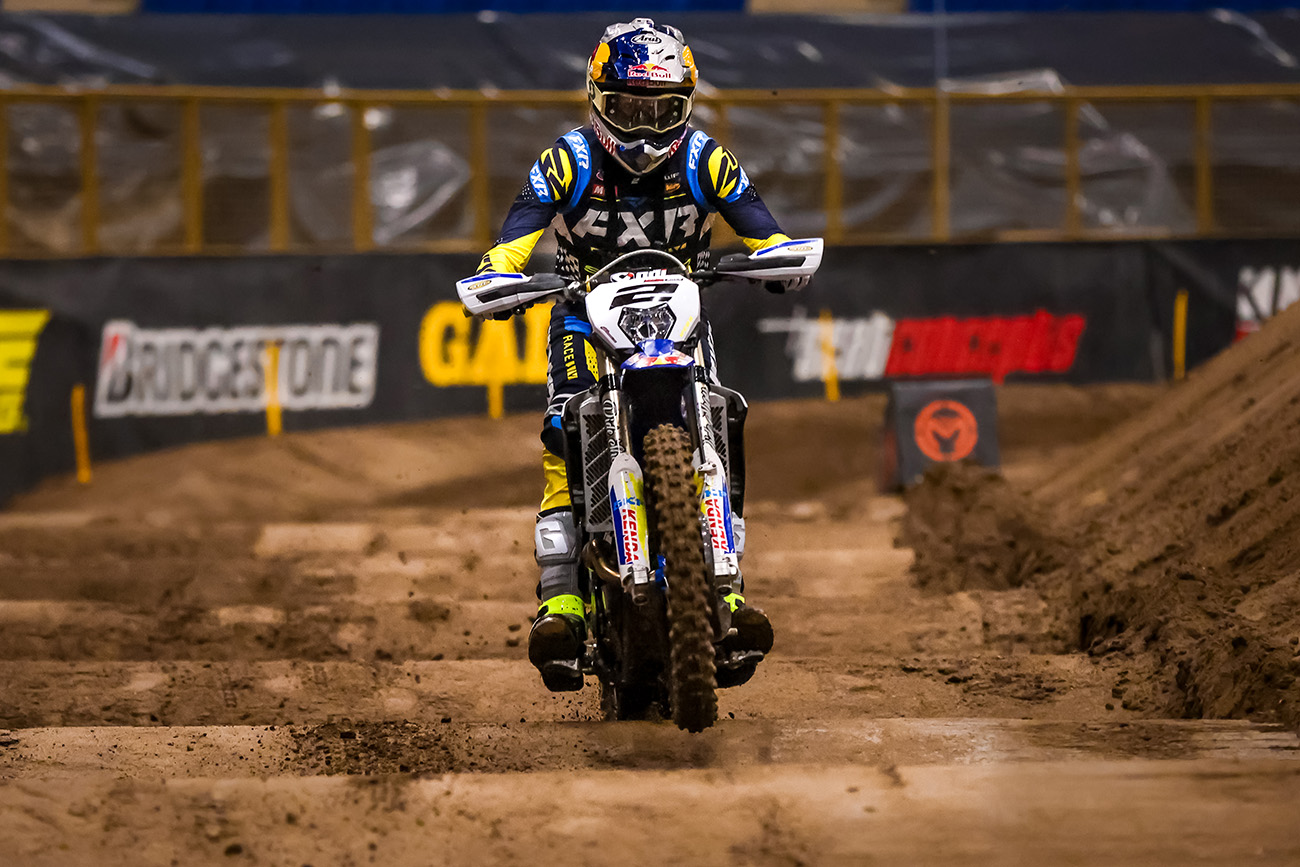 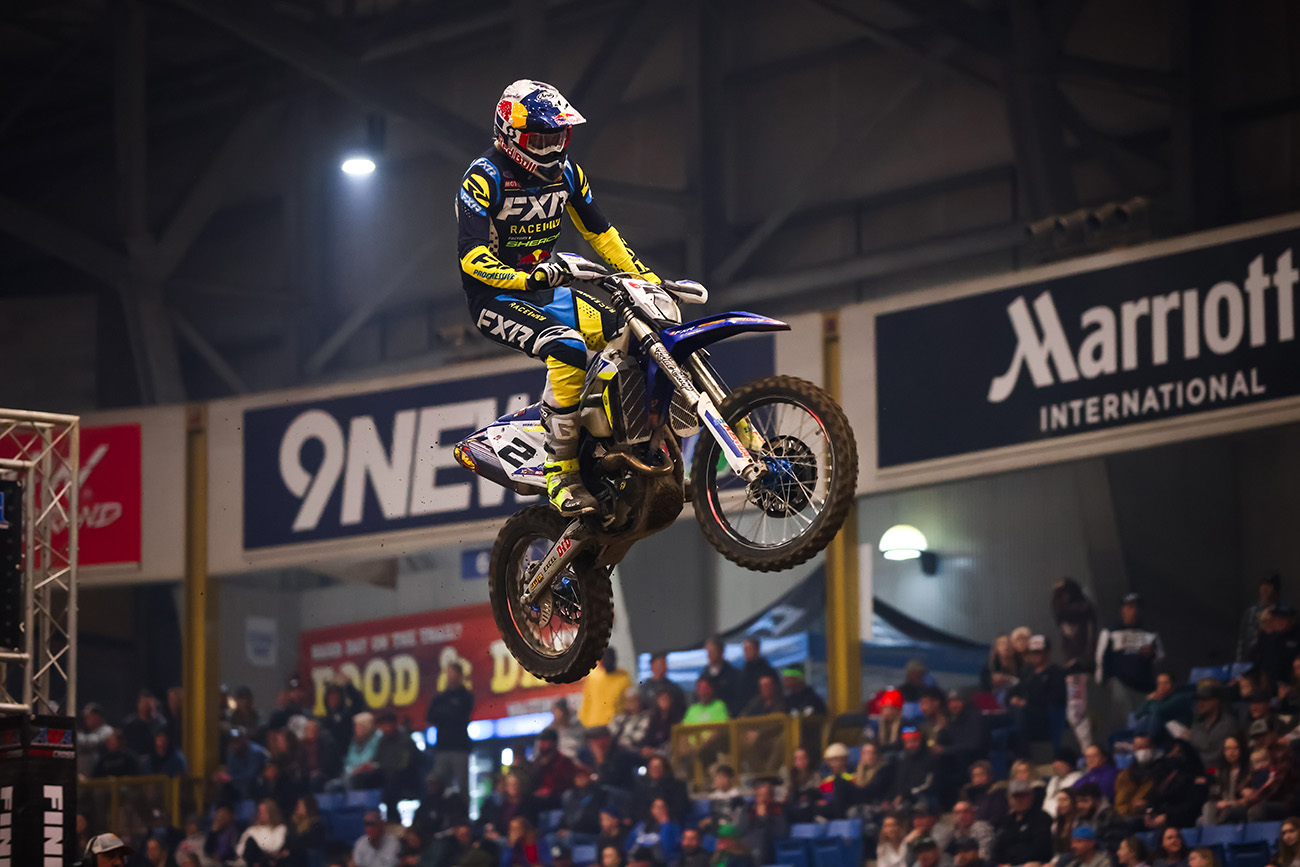 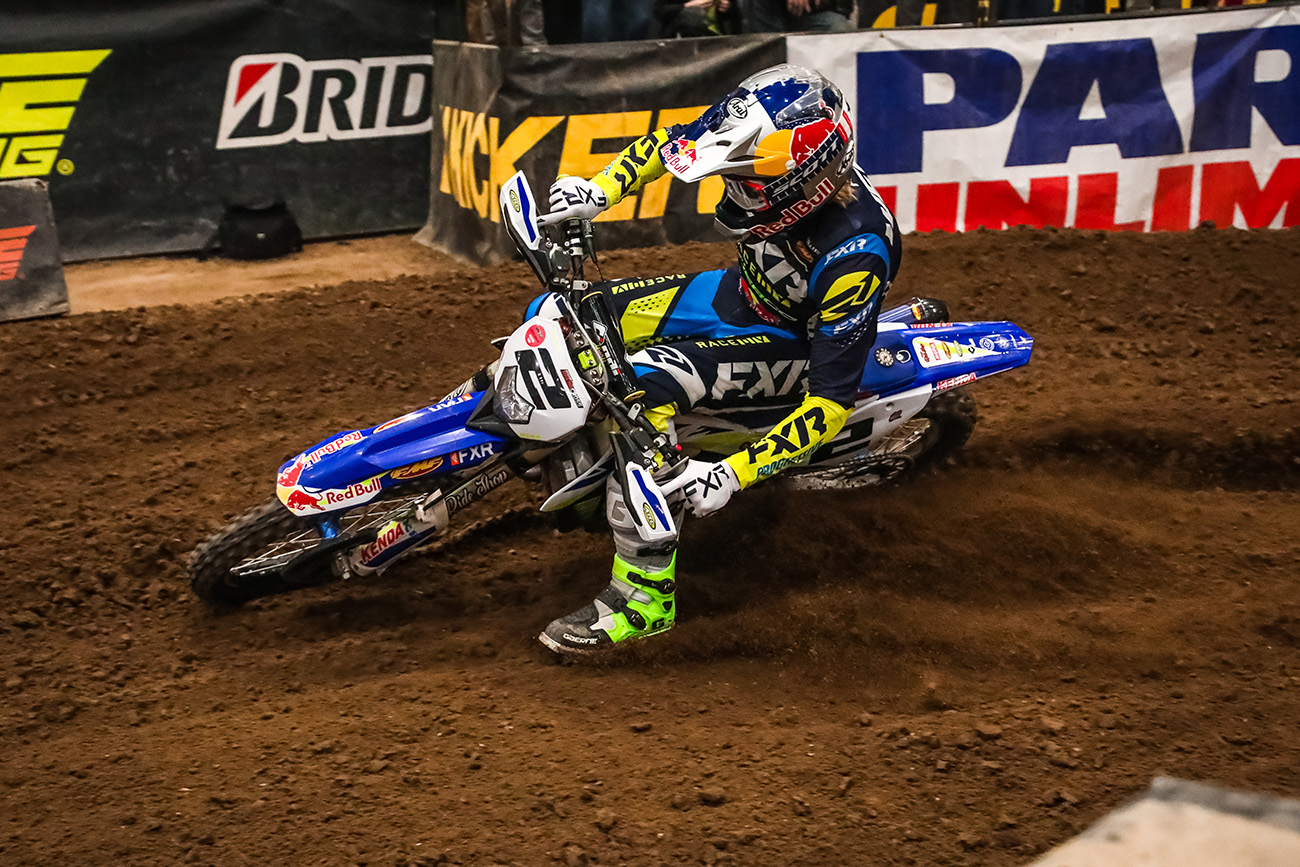 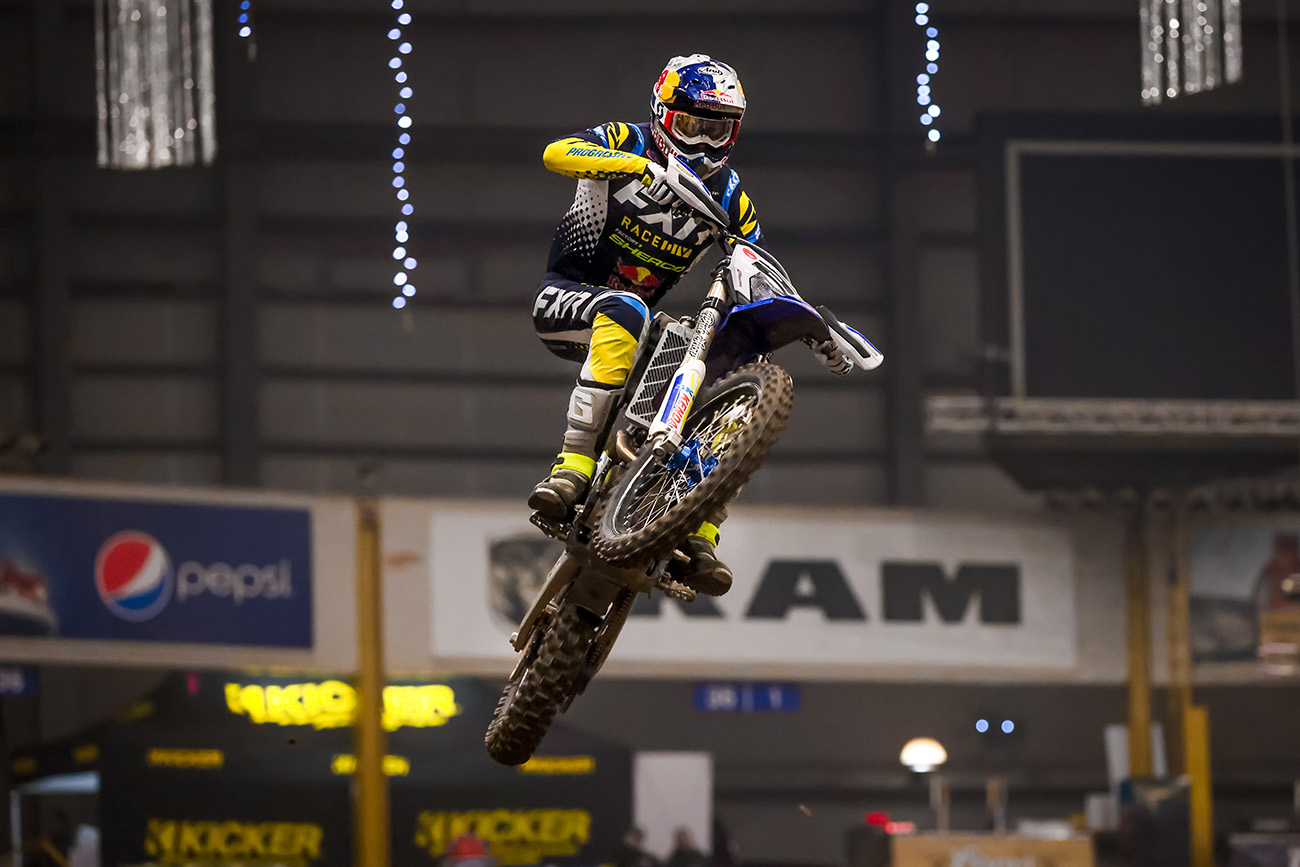 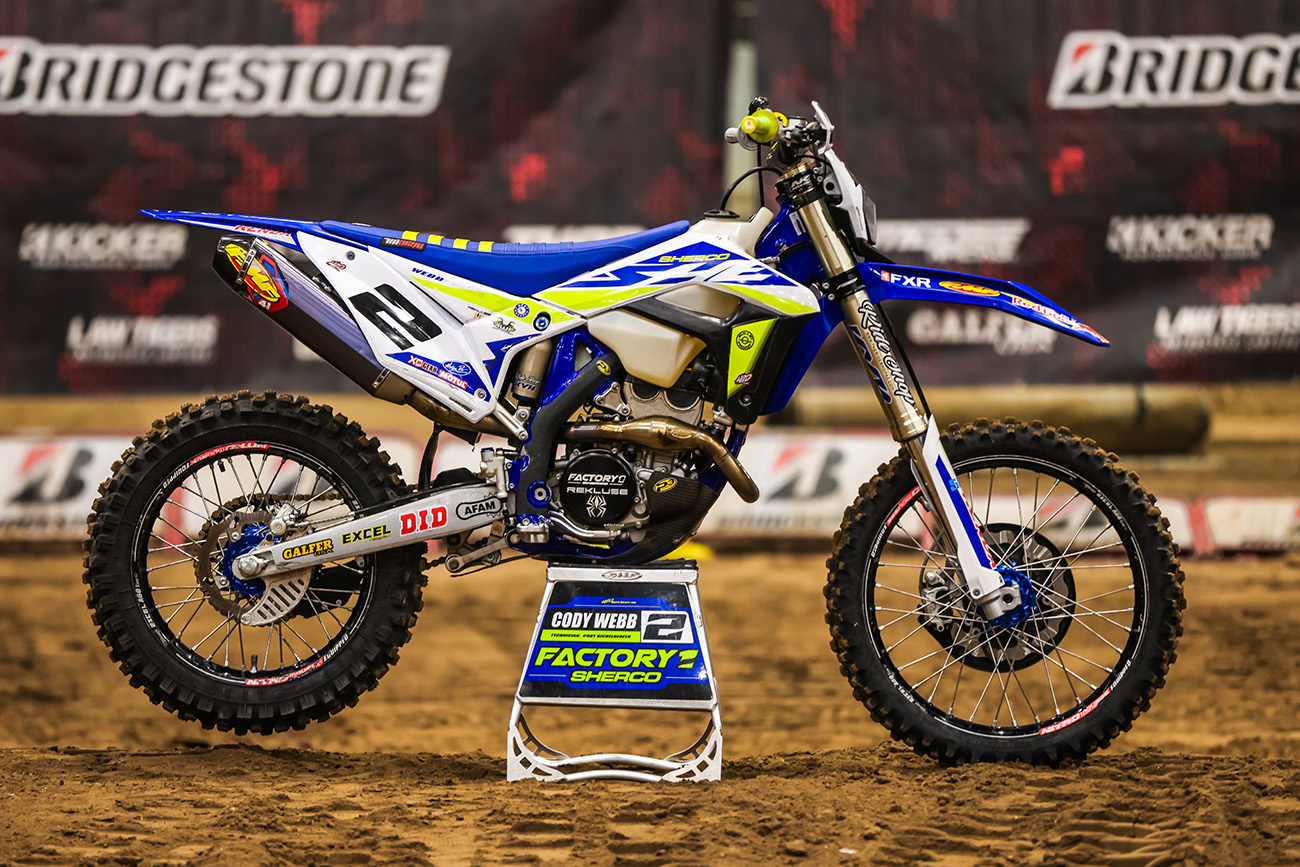 Cody Webb takes his FactoryONE Sherco SuperEnduro bike (complete with lights and handguards) to race the last two rounds of 2022 ArenaCross Championship “on a whim”.

How often have you looked at a race or event and said to yourself, I fancy doing that? When the 2022 Kicker AMA Arenacross series landed in his adopted hometown of Denver, Cody Webb did just that last weekend. The 33-year-old Sherco pilot had never before ridden a proper set of whoops and Sherco have never raced a Supercross track, but what the hell hey?

Cody lined up for rounds 9 and 10, the final races of the Arenacross season on his EnduroCross / SuperEnduro SEF practice bike complete with super soft suspension, 18 inch rear wheel, hand guards and a headlight – not ideal setup for jumps and whoops.

“The Arenacross crew asked me to come out and race the final two rounds since it was in my hometown.” Said Cody. “Since it’s the same promoter as EnduroCross, I figured I would give it a go and help cross promote the two series and get the Sherco name where it hasn’t been before.

“Honestly, I didn’t even mention it to the guys with Sherco USA until that week, but I knew they support me no matter what, so that is another reason I opted in.”

“I adjusted the clickers all the way in” – Cody Webb

“I did the best I could to set my practice bike (EnduroCross) up last minute.” Cody continues. “I bought an 18” MX tire Wednesday from my local dealer and adjusted the clickers almost all the way in. I had never hit a set of whoops before in my life, but I was more than willing to give it a try.

“I had an absolute blast and would honestly probably try and give it a go when they come into town next year. I think I impressed some of the other riders on my ‘enduro’ bike so I was pretty stoked about that…”

Cody qualified for both the 250 and 450 main events on Friday’s round nine by way of the last chance qualifiers – a surprise to many, given his setup and his lack of preparation. He was running in a top 10 position in the 250 main until he allowed the leaders to come through near the end of the race. While doing so, he thought the riders just behind him, were also part of the lead train and let them by as well, and finished 14th. In the 450 main event, he would better that with a 12th place finish.

Round 10 on night two would see Webb winning the 250 LCQ putting him in the main event once again. Bad luck would come his way in the 450 LCQ though when he crashed in a corner while trying to make a pass on two lead riders. “I was way faster than the riders just in front of me,” explains Cody, “but I just couldn't get around them. I made a dumb little mistake that put be on the ground going into the corner just before the whoops, and that ended my chance of getting into the 450 main”.  He would match his best finish from the night prior with a 12th place overall in the 250 main event.